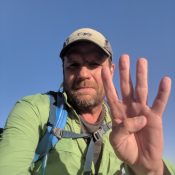 Congratulations are due P.A. Campbell who climbed all 4 Grand Slams Peaks on Sunday, June 10, 2018. This is the first report of someone climbing all 4 peaks in 1 day using a traditional vehicle shuttle. Erik Pohlmann completed all 4 peaks without using a vehicle in May 2016 and an anonymous group of endurance runners made the journey in June 2016.

Campbell started with Mount Heinen at 5:20AM, followed by Cervidae Peak, then Lucky Peak and finishing with Kepros Peak. Campbell’s total time (including driving) was 16 hours and 25 minutes. He used the following routes: