*This peak is now officially known as Mount Taranaki.

New Zealand is well-known for its glaciated Southern Alps. This mountain range has provided a training ground for many of the world’s finest mountaineers, including Sir Edmund Hillary. The Southern Alps have overshadowed the North Island’s many impressive volcanic peaks, most striking of which is Mount Egmont. 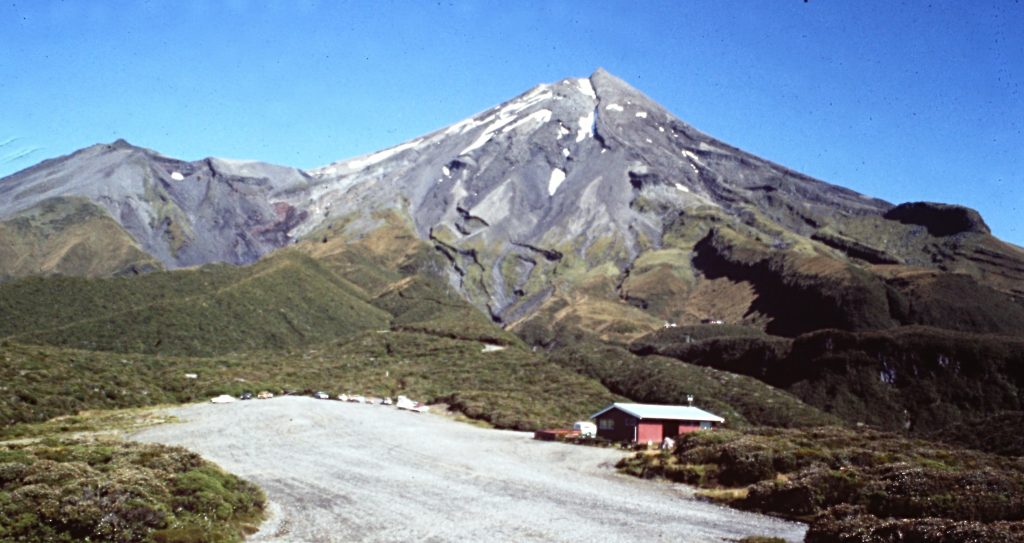 Mount Egmont from the west and the beginning of the route.

Mount Egmont is located on the North Island’s west coast on the Taranaki Peninsula, leaving the mountain surrounded on three sides by the Tasman Sea. The mountain rises from sea level to 8, 260 feet. The maritime position of this large peak gives it the characteristics of a weather magnet. The land surrounding the peak is a virtual rain forest of exotic plants. Rainfall on the nearby west coast is 60 inches per year, while at 3,000 feet on the mountain slopes, rainfall rises to 300 inches per year.

The mountain was known to the native Maoris as Taranaki. However, in 1642, Captain Cook saw the peak and named it after the Earl of Egmont. The Earl was the famous captain’s boss.

The first ascent of Egmont was in 1839 by Ernst Dieffenbach, a naturalist attached to a whaling ship. By 1870, summer ascents had “ popular and great sentiment was developing to protect the peak. The New Zealand govem- ment took steps in 1881 to protect the area from commercial development and then, in 1900, Egmont became a National Park. The Park encompasses 82,480 acres.

New Zealand might be described as a nation of mountain climbers, and Mount Egmont is the country’s most often climbed peak. Climbing at- tempts take place every month of the year. The winter months (our summer) offer steep ice and snow climbing and skiing. In addition to climbing opportunities, there are almost 200 miles of hiking trails on and around the mountain.

To aid climbers and hikers, the National Park Board provides 13 huts which can be used on a first-come, first-served basis. Several of these huts provide excellent jump-off points for summit climbs.

There are several popular routes up the mountain. All of the routes involve long walks and large elevation gains. The highest roadway ends at 3,750 feet. Most routes begin at elevations well below 3,000 feet. Many people take two days to make their climb, spending an overnight stop at one of the Park Board huts.

The routes are all non-technical during the sum- mer months. Climbing conditions vary from vol- canic rock to pumice rock. Rock texture varies from crumbling and broken to hard and solid on the east face. The peak becomes a technical problem  during the winter. A rope, ice axe, and crampons are necessities for snow and ice conditions.

Due to the high rainfall on the peak, waiting for the weather to clear is a common pastime for summit climbers. When a clear day ﬁnally arrives, climbers usually turn out in large numbers. On my visit to the summit, I counted over 100 other climbers who reached the top.

Egmont can be a dangerous peak even when the weather is stable. In 140 years of climbing history, there have been over 30 recorded deaths. The main danger is a thick mist that can form in a matter of minutes, even on clear days. The mist produces extreme  whiteout conditions and, coupled with rain, can produce severe hypothermic conditions.

I climbed Mount Egmont in early March via the East Ridge-East face route. A trail leaves the ‘ parking area on the mountain’s east slope at 3,750 feet. The trail crosses a broad ridge and enters a small gorge, finally arriving at a ski lift. (Can you imagine American downhill skiers hiking over a half mile to reach a ski lift?) At the ski ﬁeld the trail ends, and the route turns up steeply. A rock formation called “The Policeman” is found at 5,500 feet, after a steep climb through alpine tundra. Behind The Policeman, the route works up a long 45-degree chute. At the top of the chute the route moves out onto the east face where there is some enjoyable scrambling. Climbing on the face avoids the loose pumice that characterizes the upper sections of the east ridge.

The views of the Taranaki Peninsula and the Tasman Sea from the summit are stunning. The national park boundary is clearly distinguished as though you were looking at a map, because agricultural development has cleared the native bush right up to the park’s circular boundary. The park is a green island in a sea of farmland. This con- trast between development and preservation speaks well of the need for national parks. The volcanoes of Tongariro National Park can be seen 100 miles to the east; the ever present Tasman Sea is on the north, west, and south sides of the peak.

If you can overcome the expensive airfare. you will find traveling in New Zealand very simple. There is a good network of public transportation, including bus, train and airlines. Competition for accommodations can be keen during January and February, when most New Zealanders are taking their summer holiday, but your travel agent or the two New Zealand Travel Offices in the U.S.A. (Los Angeles and New York) can make advanced reservations and provide complete information on anything from climbing guides to luxury hotels.

Before I traveled to New Zealand, I wrote a letter to the Chief Ranger at Mount Egmont asking for information. I not only received a personal letter with the information that I requested, but I also received a valuable offer of assistance when I arrived. New Zealan‘ s are uncommonly friendly and helpful to the traveler.

New Zealand is a small country, yet Mount Egmont is just one of many exceptional peaks. Climbing in the country is a total experience, of pristine wilderness, good companionship and challenging peaks. 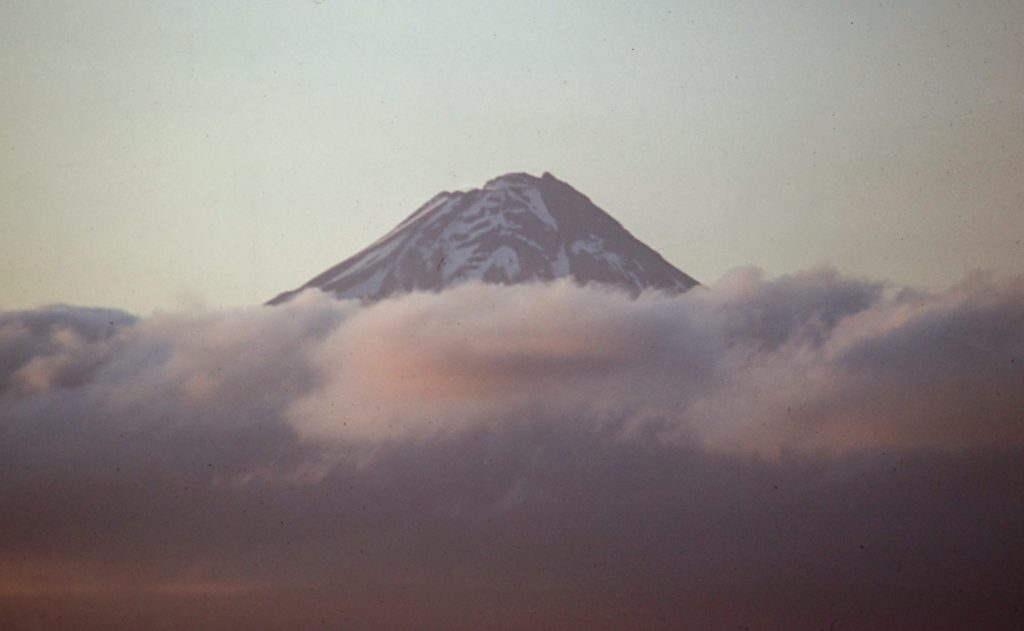 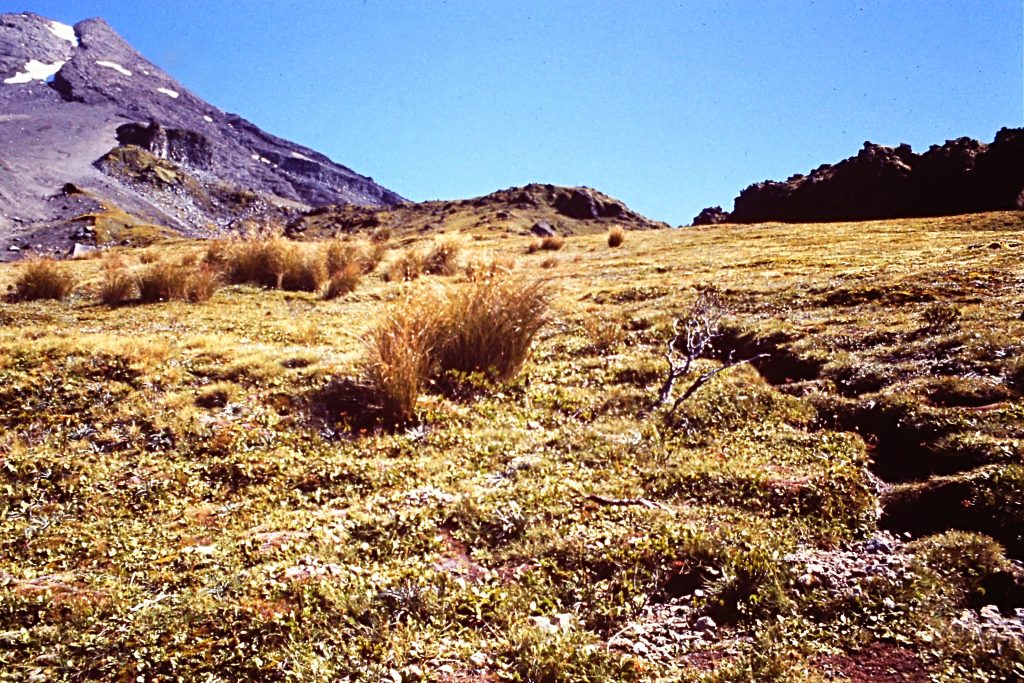 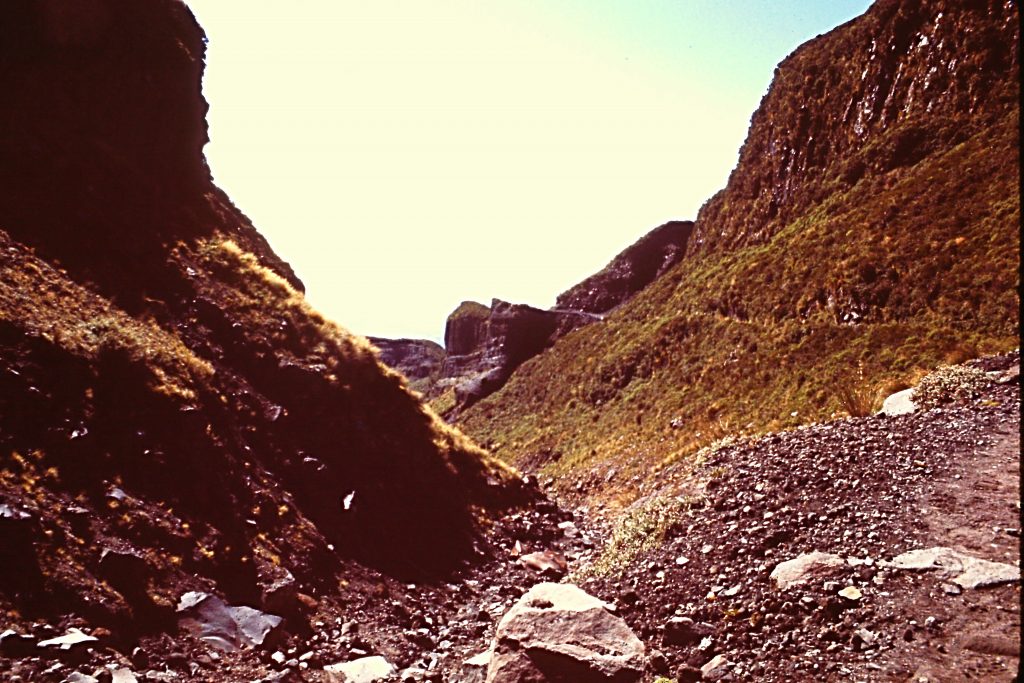 The route through this gully was characterized by a good tread. 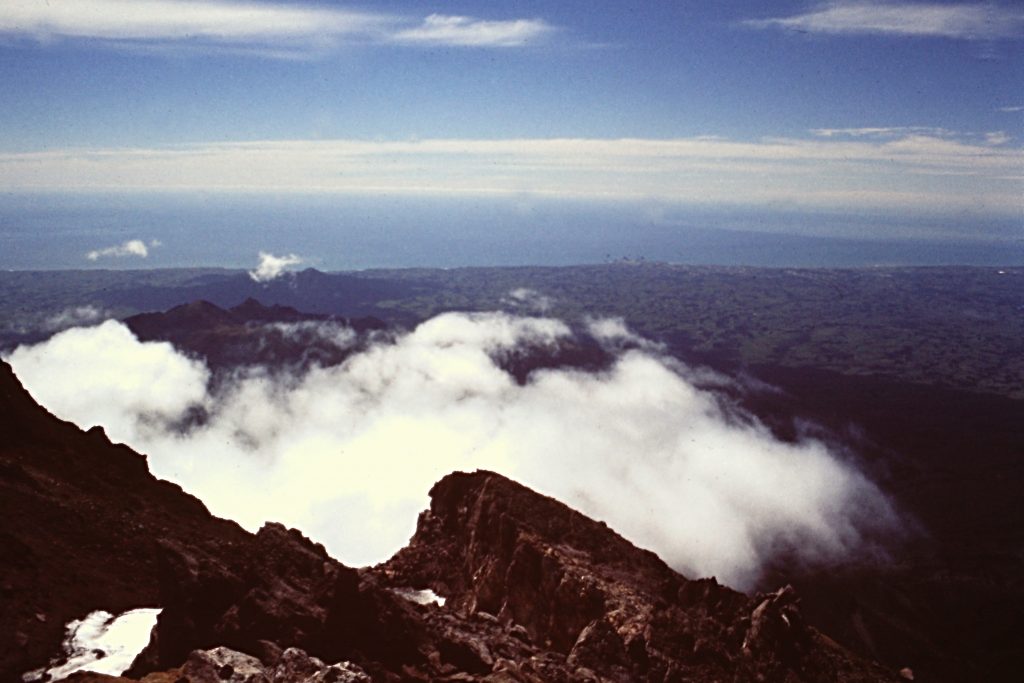 Looking over the crater from the high point. 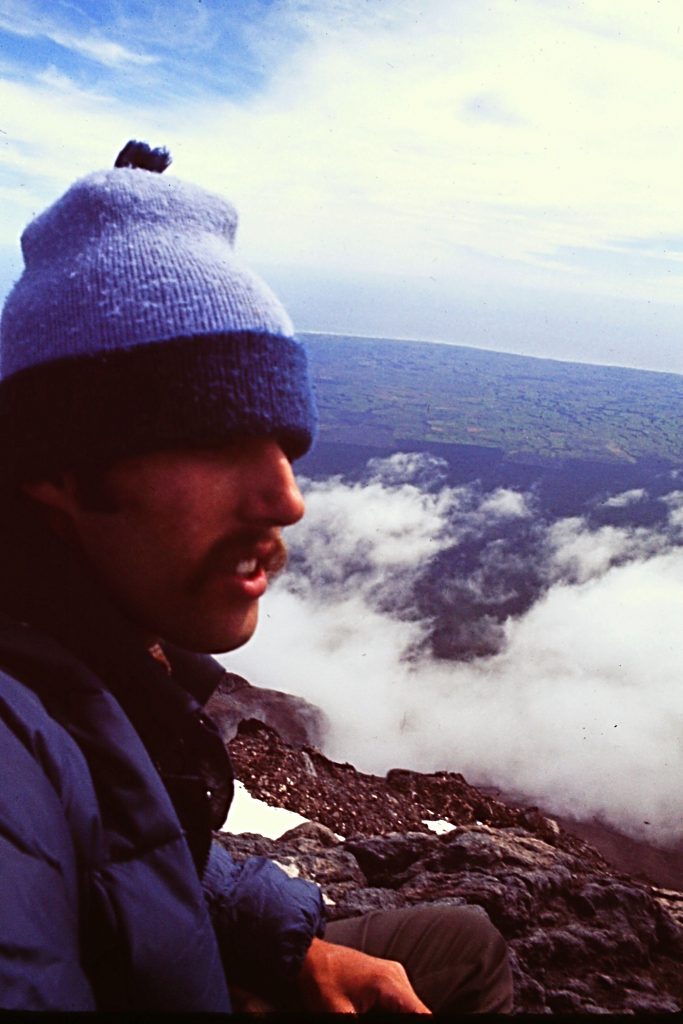 A few final thoughts on New Zealand circa 1975:

In 1975 New Zealand was not in the conscious of most Americans. The Kiwis were among the friendliest and most helpful people I have ever met. While they had a healthy dose of curiosity about America most of them knew more about the Indianapolis 500 than I did. More than once I was offered free room and board but alas the 30 day visa issue kept me from staying longer and taking them up on these offers.

My last day was in Auckland I had a late flight out and ten hours to kill. I flew into Auckland early in the morning. I went to the Pan Am booth at the airport hoping to check my bag. It was closed but I found a Pan Am employee in a coffee shop. Although he could not check my bag ten hours before the flight, he stored it for me so I could go downtown unencombered. I had a lot of time to kill and decided to see a movie. I found a theater showing the Mel Brooks classic, Young Frankenstein. At the ticket window, the women told me the show had started five minutes ago and she couldn’t sell me a ticket. Instead, she let me in for free. In a capsule, that is how everyone treated me in New Zealand from the Mount Egmont Ranger who picked me and drove me to the trailhead and then retrieved me at the end of the day to the people who offered me free room and board to the woman at the movie ticket booth they were all generous, helpful and kind.

Go to my ARTICLE INDEX