The Lost River Range is a seldom-visited pile of sedimentary rubble in the southeast corner of Idaho’s central mountains. The range has not only the 2 highest peaks in Idaho but also the largest concentration of 12,000-foot summits in the State. Borah Peak (12,655 feet) is the highest point in Idaho. Although climbers come from all over the west to scale Borah because of its “highest peak” status, most of the other peaks are rarely climbed. There is a distinct possibility that several major peaks in the range still remain untouched by human feet. Inaccessibility and bad crumbly rock are the 2 major factors governing the lack of climbing history.

On our summit attempts in the range, we have found a different world from the nearby Tetons or the vast Wind Rivers. The routes are grungy, yet they offer a challenge and a beauty all their own. The big peaks and the bad rock have their own special character. The range runs 70 miles north to south between Challis and Arco, Idaho. The Big Lost River Valley and the Salmon River ﬂank the range on the west. East Side approaches are through the Little Lost River and Pahsimeroi Valleys. Two dirt roads cross the range. One road crosses at Pass Creek Summit and the other at Doublespring Pass. The heart of the range lies between these 2 crossings.

The majority of the Lost River Range is composed of layered sedimentary rocks. There are also volcanic rocks extensively distributed throughout the range. Paleozoic Age rocks have been folded and faulted into near vertical ramparts which provide impressive cliffs and faces. The sedimentary rocks are extremely fractured and shattered. The geologic make up has formed a rugged, broken range.

Access is difficult and often requires lots of time and a 4WD vehicle. There is a good access only to the Borah Peak area. This remoteness and the spectacular scenery has led the Forest Service to recommend that 119,864 acres in the central Lost River’s become wilderness. The proposal is currently tied up in Congress. The West Side of the range is very dry with no dependable water sources. The East Side is wetter and has a few alpine lakes and several permanent streams.

Borah Peak is climbed by 200-300 people each year. It is most frequently climbed by its South Ridge. The route is a long, grueling grind that starts at 7,400 feet. The route is generally a steep hike, with only the last 600 vertical feet providing some interesting bouldering opportunities. The summit register on Borah makes reference to “fantastic” ice-climbing opportunities on the North Face. At any rate, Winter climbing in the range is hazardous because of the high avalanche potential. In November 1977, two Idaho Falls climbers were swept away and killed by an avalanche on the peak.

The 2nd-most climbed peak is Leatherman Peak (12,228 feet). The old coffee can that serves as the summit register holds little history inside its mated skin. The register records climbs from 1960 to the present. Many years have gone by without a successful climb and possibly without even an attempt. This peak is climbed almost exclusively by its West Ridge, beginning at Leatherman Pass. The route climbs more than 1,600 feet to the summit. The steep talus-covered route climbs over and around fractured rock towers and up two small snow gullies. Climbing without dislodging rock is impossible, it is hazardous for 2 parties to climb at the same time.

Leatherman Pass can be reached from 3 different drainages: the Pahsimeroi, Sawmill Gulch and Lone Cedar Creek. The pass itself is at 10,600 feet and forms a major notch in the 12,000-foot Lost River escarpment. The range can be reached from Idaho Falls, Idaho via US-20 to Arco, Idaho. US-93 runs north and south between Arco and Challis on the West Side of the range. ID-33 runs east to Howe, Idaho. At Howe, take the Pahsimeroi Highway north through the Little Lost and Pahsimeroi Valleys. The USGS quads for the major peaks are Borah Peak, Leatherman Peak, Massacre Mountain,  Elkhom Creek and Burnt Creek.

Use this link to see my ARTICLE INDEX to articles I’ve written about Idaho and other adventures I’ve had outside Idaho. 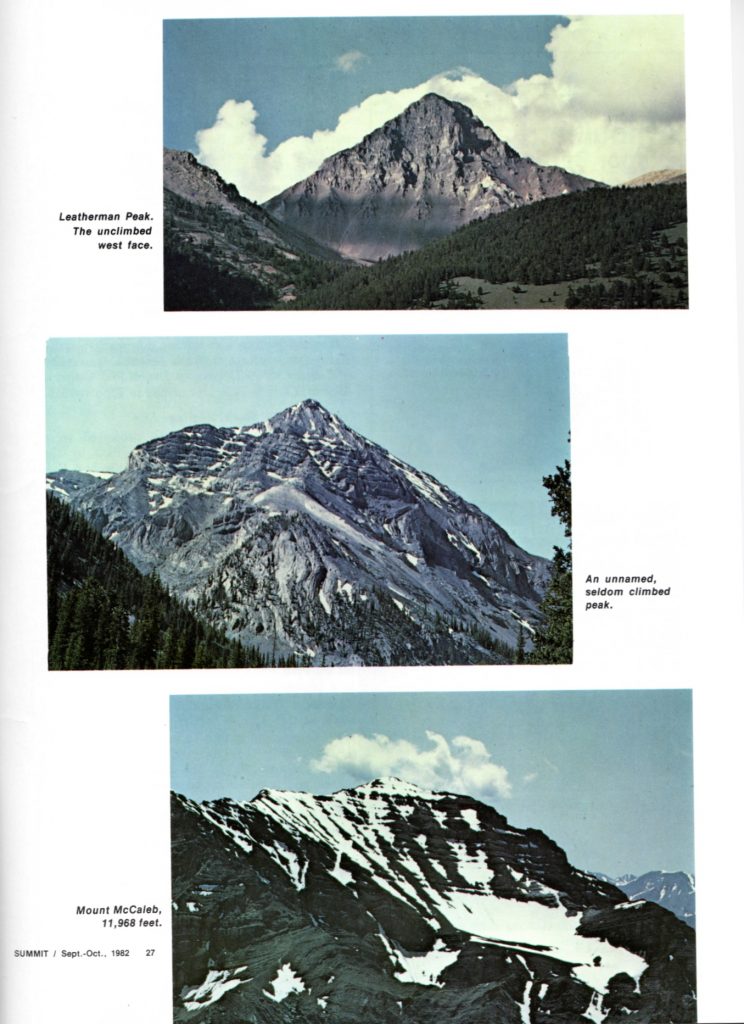