Our Fall motorhome trip in 2015 made stops in Southern Idaho, Nevada, Arizona and Utah. We hiked, climbed, listened to great music and absorbed a lot of great scenery. Below is a brief outline of our journey.

October 25. Drive from Boise to the City of Rocks with a side trip to Mount Harrison and Conner Ridge in the Albion Range. My 87th and 88th peaks of the year. 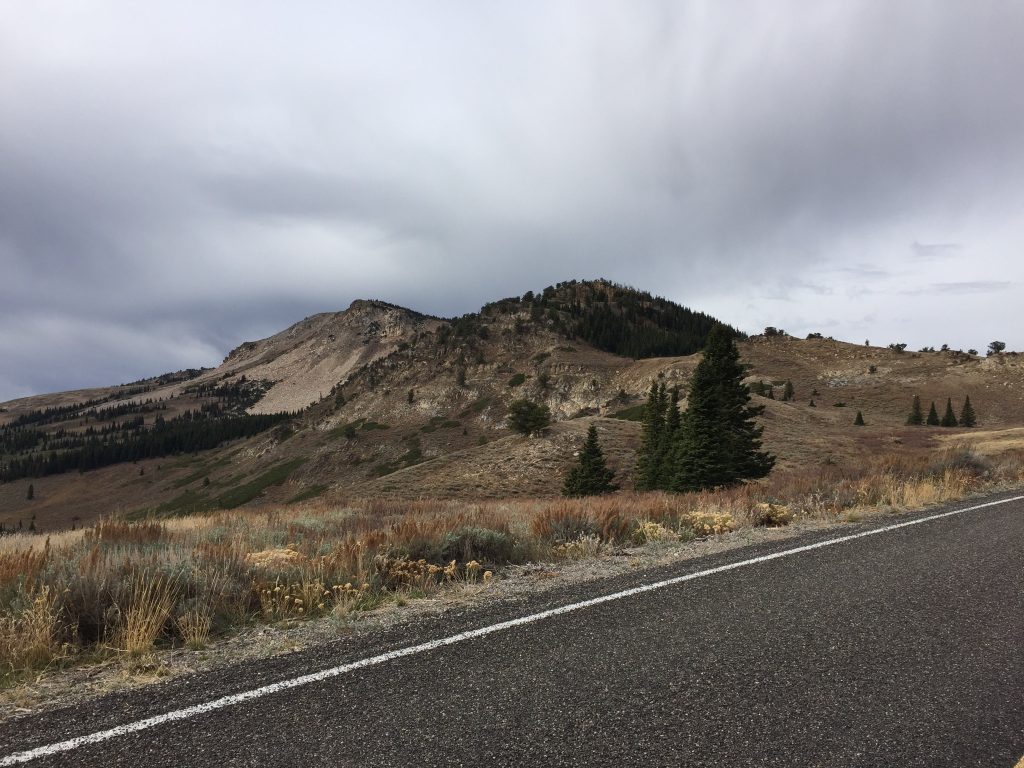 It was a cloudy day which made for great lighting on the peaks. Mount Harrison is a beautiful peak with a paved road to the summit. There are lots of self-propelled ways to reach the summit. Conner Ridge is a peak composed of a big sweeping ridge above the Pomerelle Ski Area. We have a nice campsite (#11) at the City of Rocks though the site is not level. We are nearly surrounded by granite. 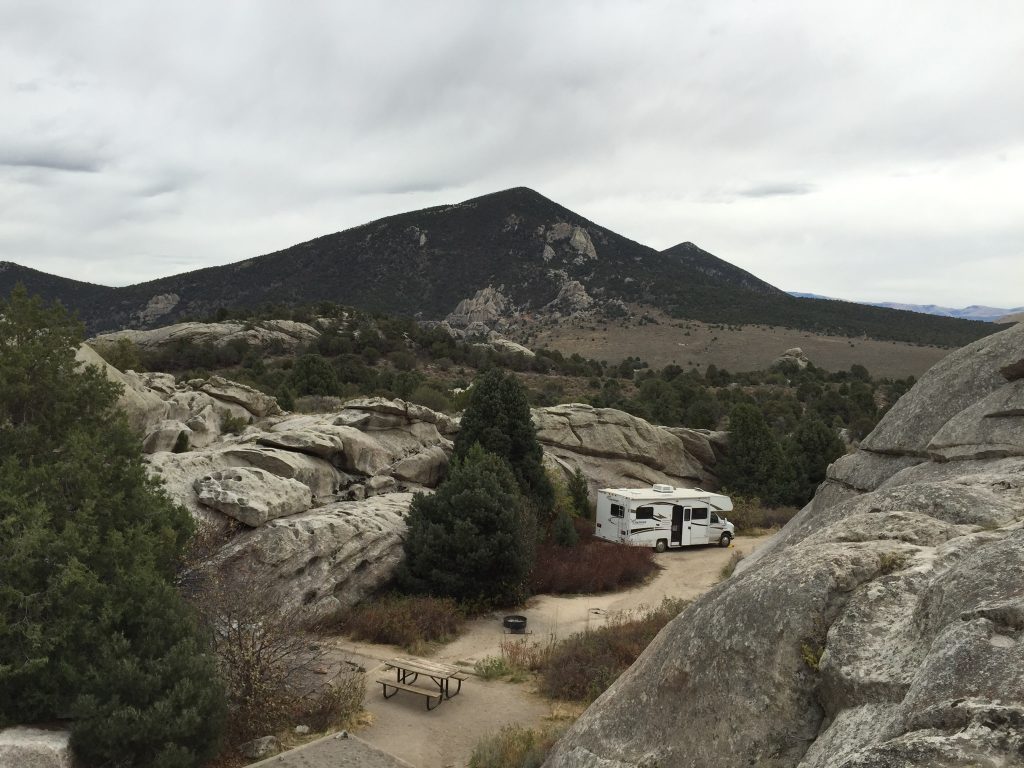 The City of Rocks

October 26. We started the day by hiking up Peak 7715 which was my 89th peak of 2015. Beautiful morning. We spent the rest of the day taking short hikes among the crags and visiting Castle Rock State Park. Spent the night in the State Park Campground which was mostly empty. A State Park employee placed a warning on the motorhome where we parked for Peak 7715 saying that we had illegally camped there. Very strange. 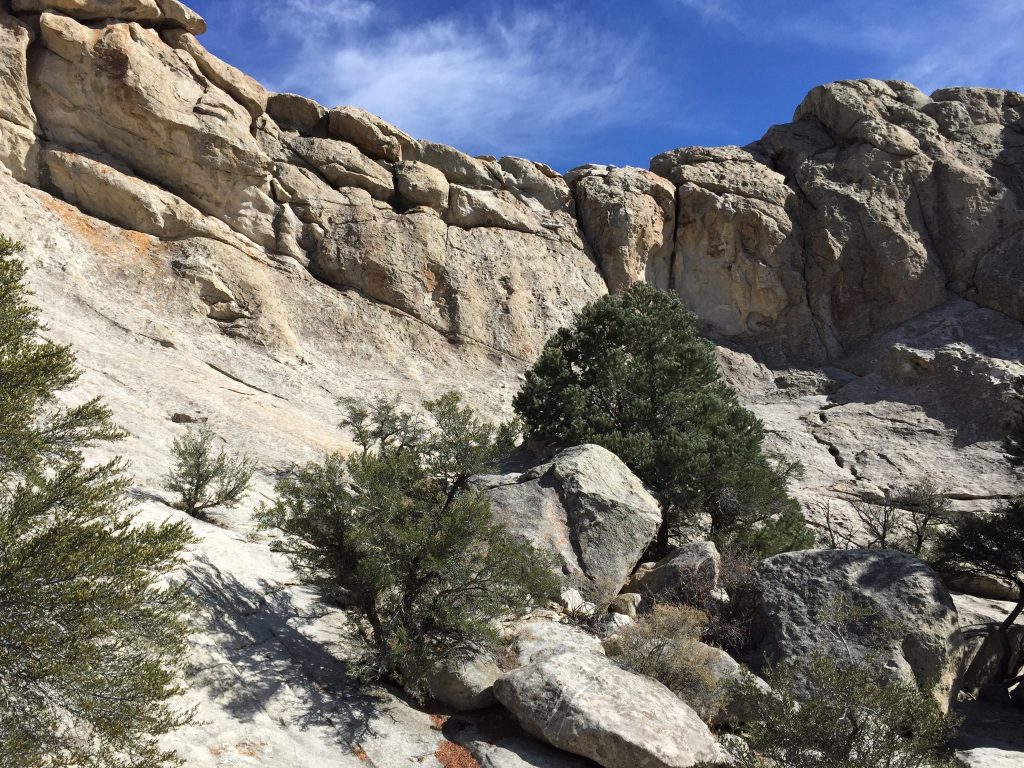 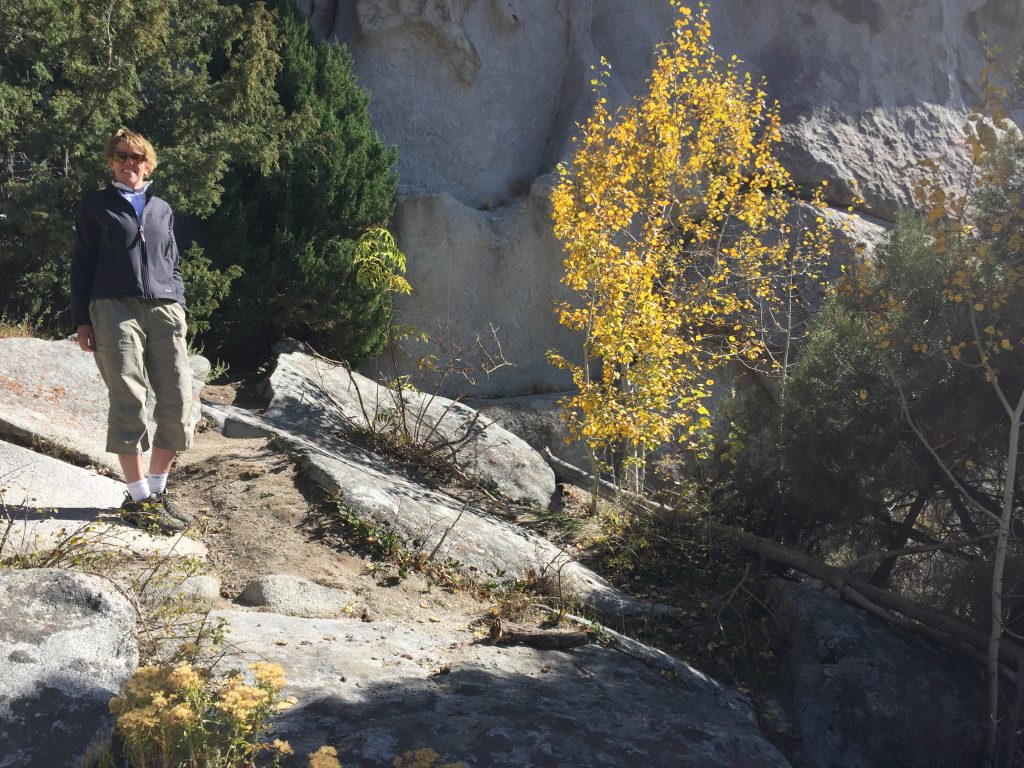 There are a lot of nice hiking opportunities in City of Rocks and Castle Rocks. 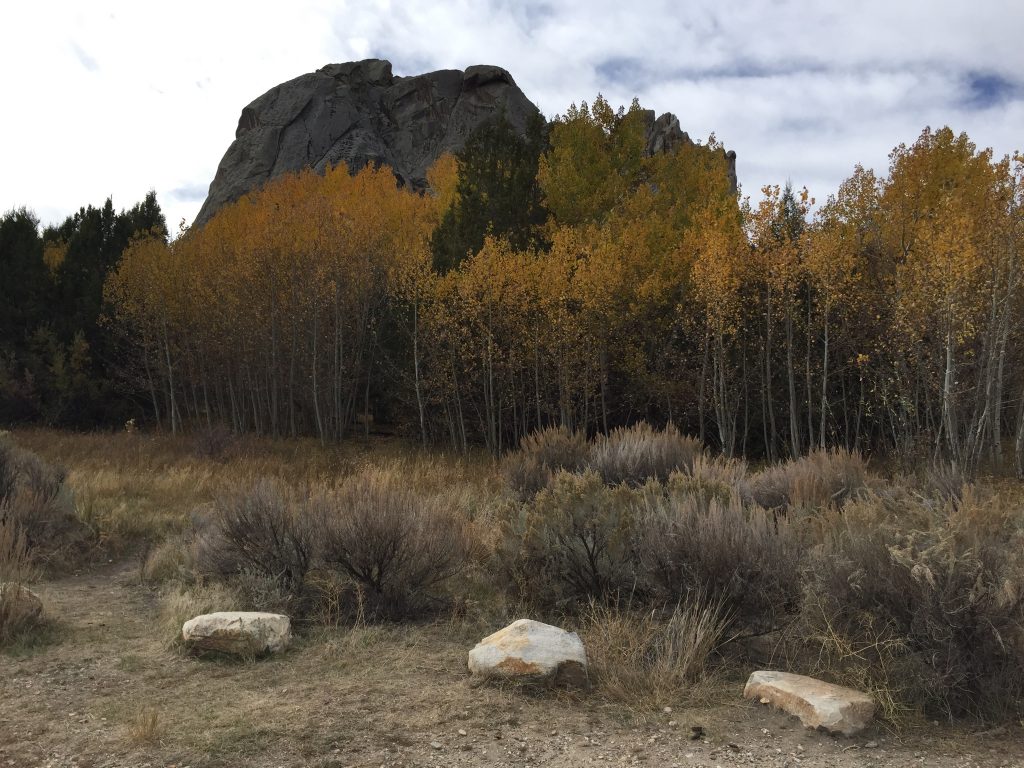 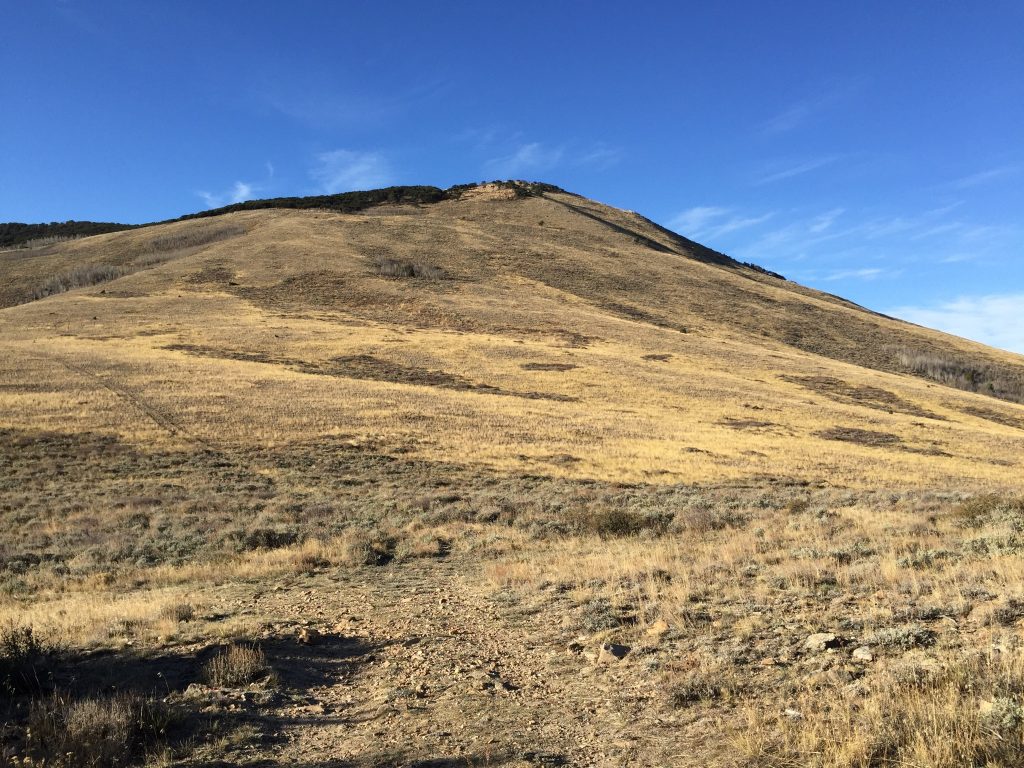 October 27. A long day driving from the City of Rocks to Great Basin National Park. We drove all the way to the campground below Wheeler Peak at 10,000 feet. There is snow on the North Faces of the peaks in this area. I suspect that it will get cold tonight. The road up here is amazing and is about all the motorhome can handle. 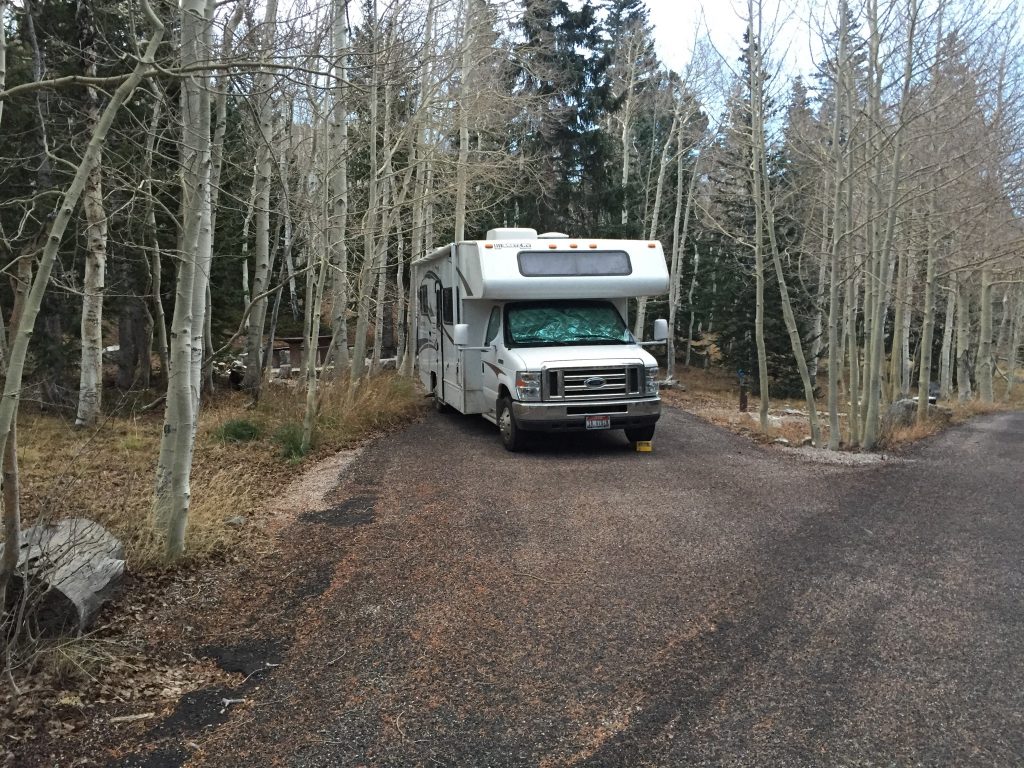 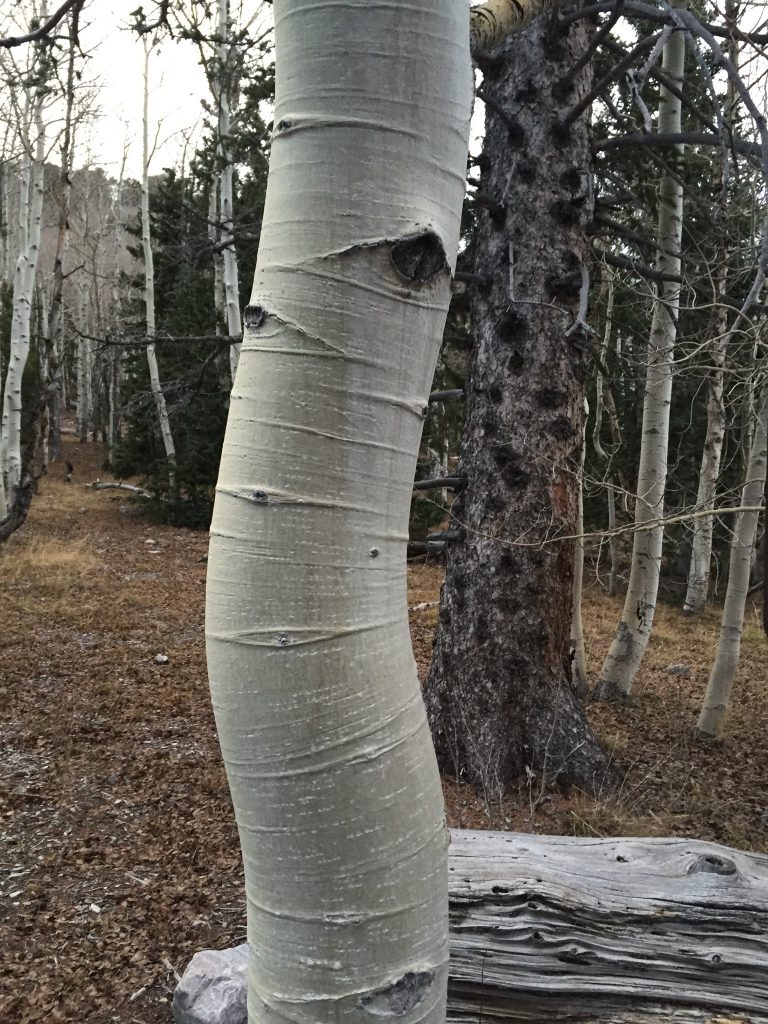 October 28. We got up early. Laurie made my breakfast. We drove the short distance to the trailhead and I started hiking at 7:15AM. It was overcast and cool with a breeze but still great hiking conditions. Reached the summit of Bald Mountain about 1-1/2 hours later. The last 300 feet were cold and windy but the sun came out briefly. I continued on to Buck Mountain over easy terrain in another 40 minutes. Great views of Wheeler Peak all the way. I made a quick descent down to the road through a beautiful aspen forest. Total hiking time was 3 hours. A special hike by any measure. 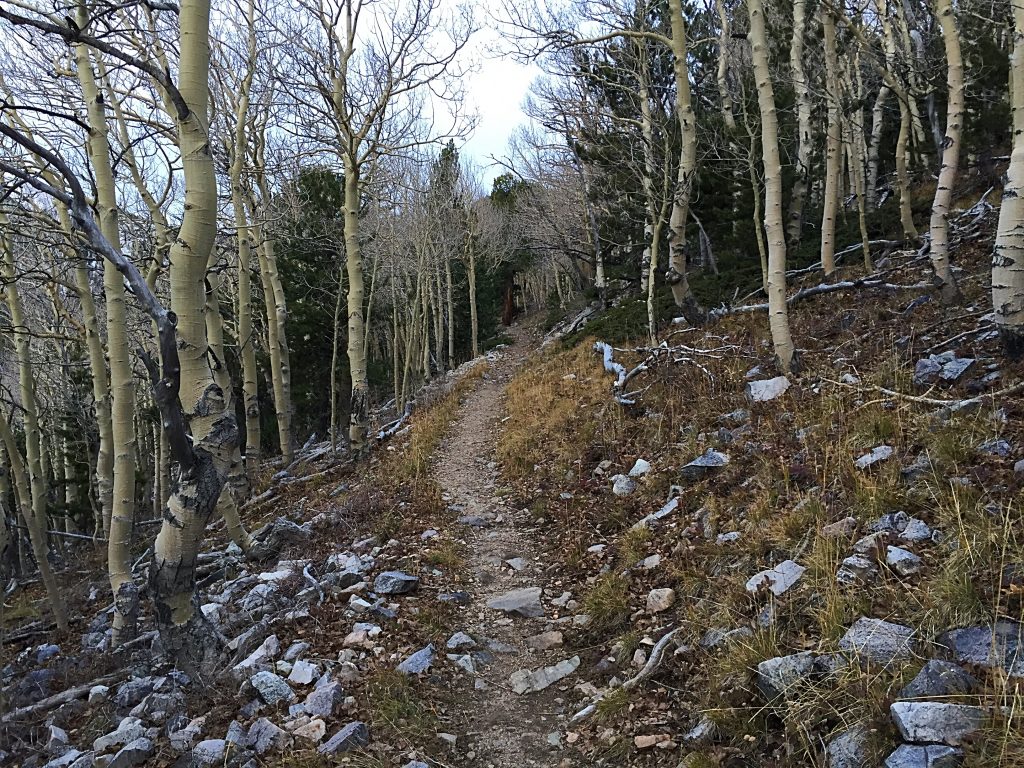 My climb started out following the trail to Wheeler Peak. 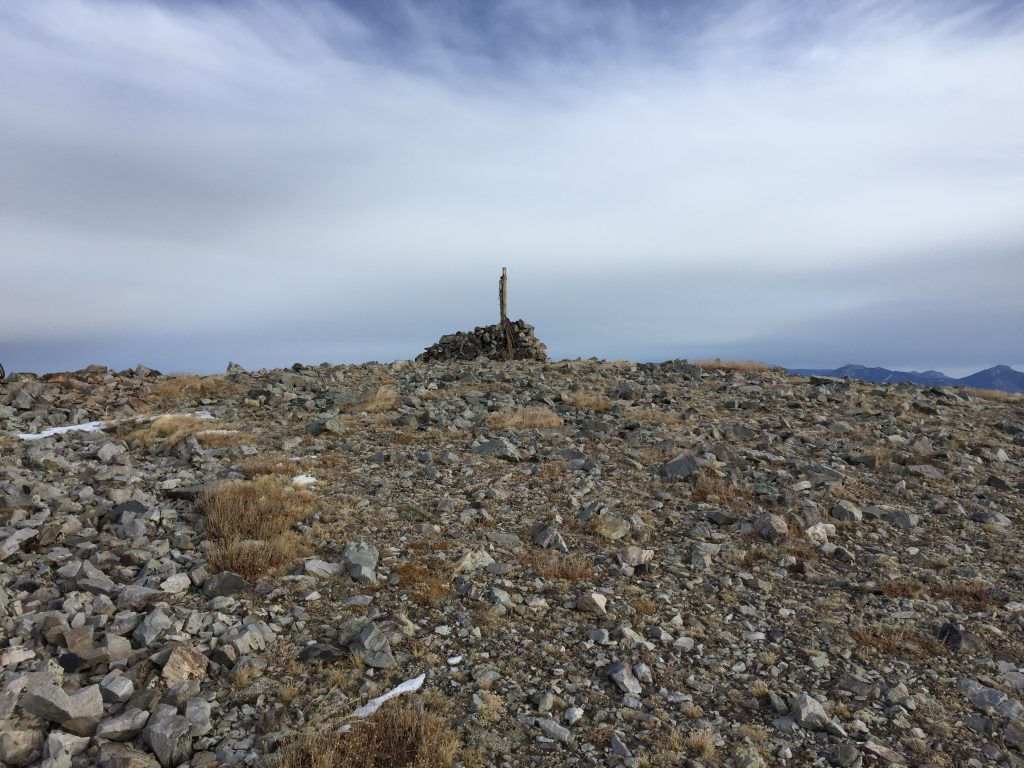 The summit of Buck Mountain. 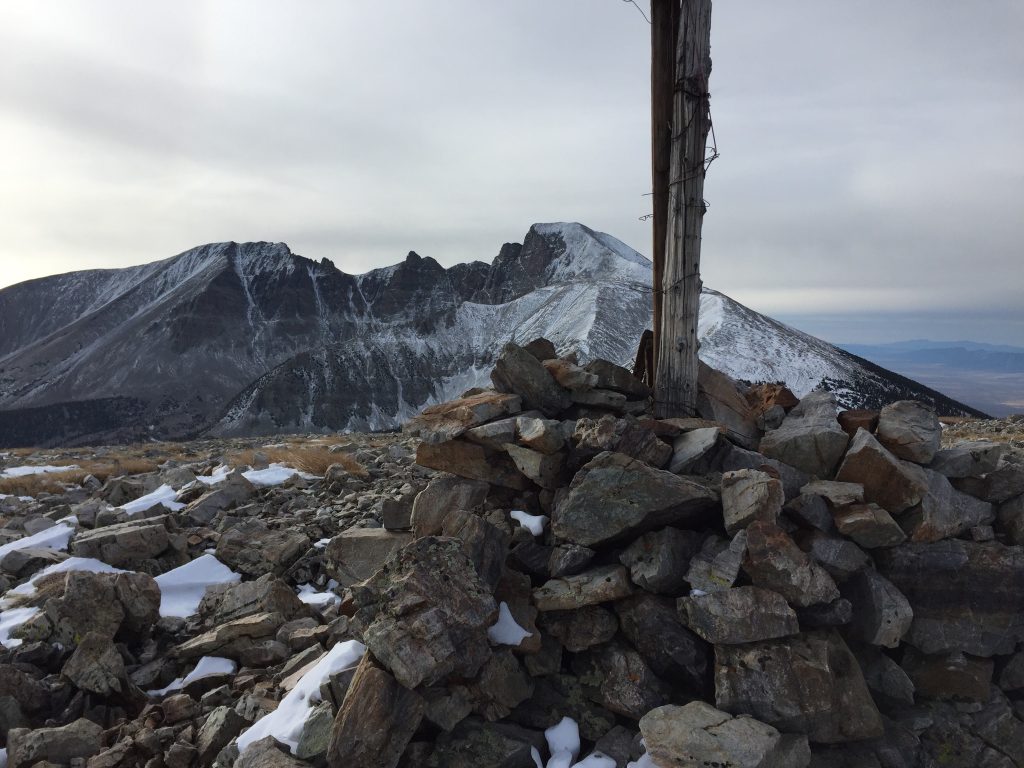 Back at the motorhome, Laurie made me a gourmet tuna sandwich and gave me a big hug. We drove down to the lower Lehman Creek Campground and grabbed Campsite #5. It is supposed to snow tonight and tomorrow.

October 29. Woke up to a snow/rain mix with low clouds. Drove through interesting, big country to Cedar City and stayed at a shitty KOA. It rained all night. We evaluated the weather and decided to drive south to Sedona, AZ.

October 30. Got up early and drove to Las Vegas for a 17-minute ascent of Lone Mountain. We continued our drive via US-93. An extremely windy drive. Laurie got us into the Rancho-Sedona RV Park. A long day. 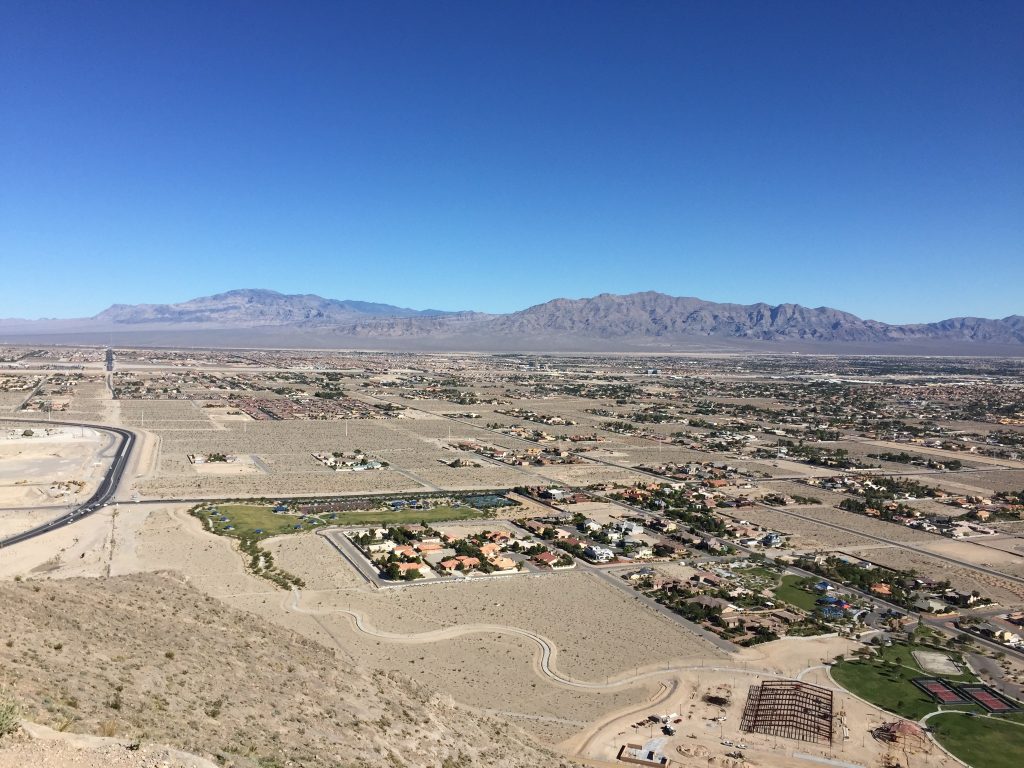 The view from Lone Mountain.

October 31. A screwy day waiting to change campsites and get a rental car. Went downtown to browse at 20 shops selling junk. Had lunch at a nice Thai restaurant. We drove southwest of town to check out trailheads. I hiked up Doe Mountain. 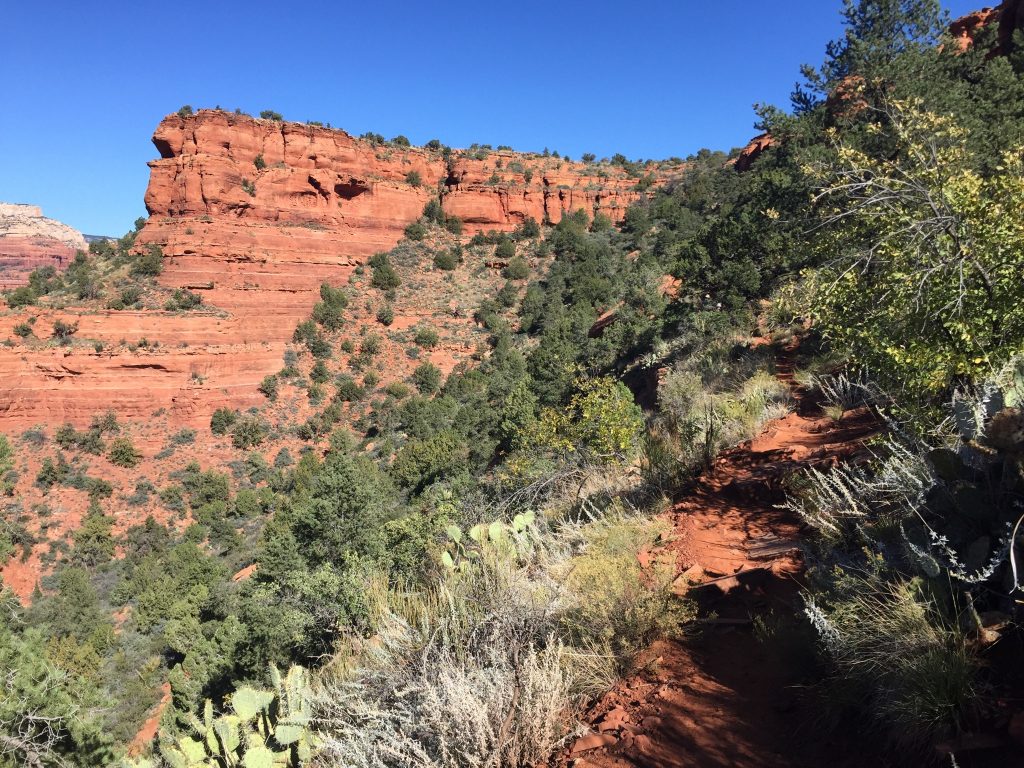 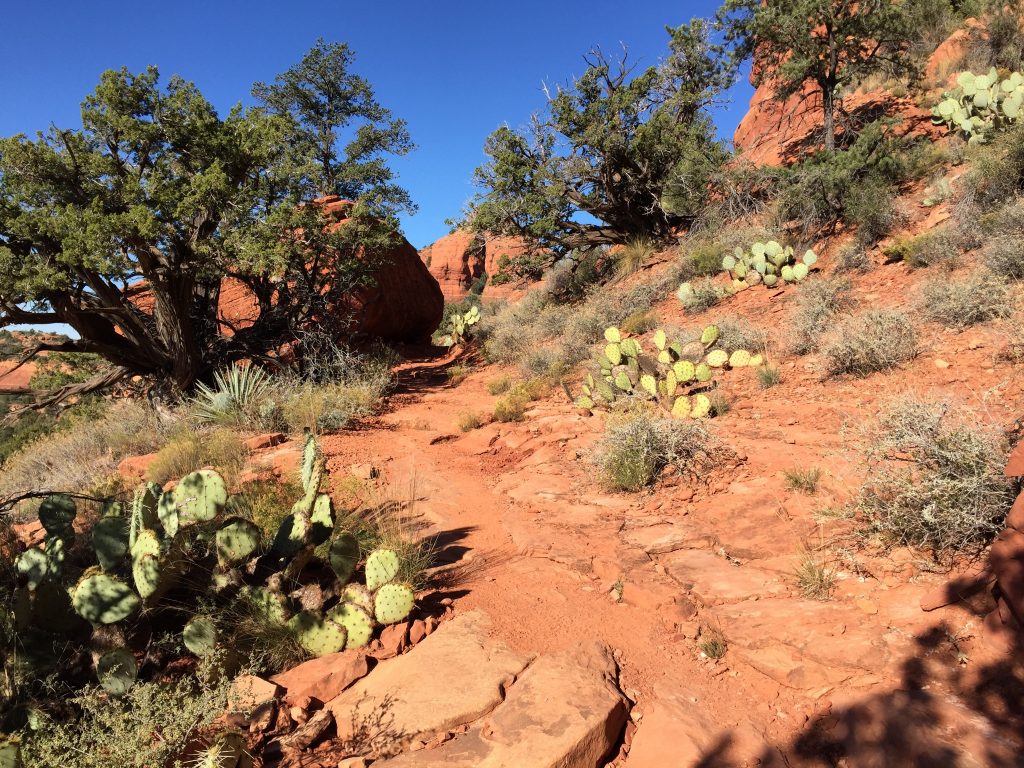 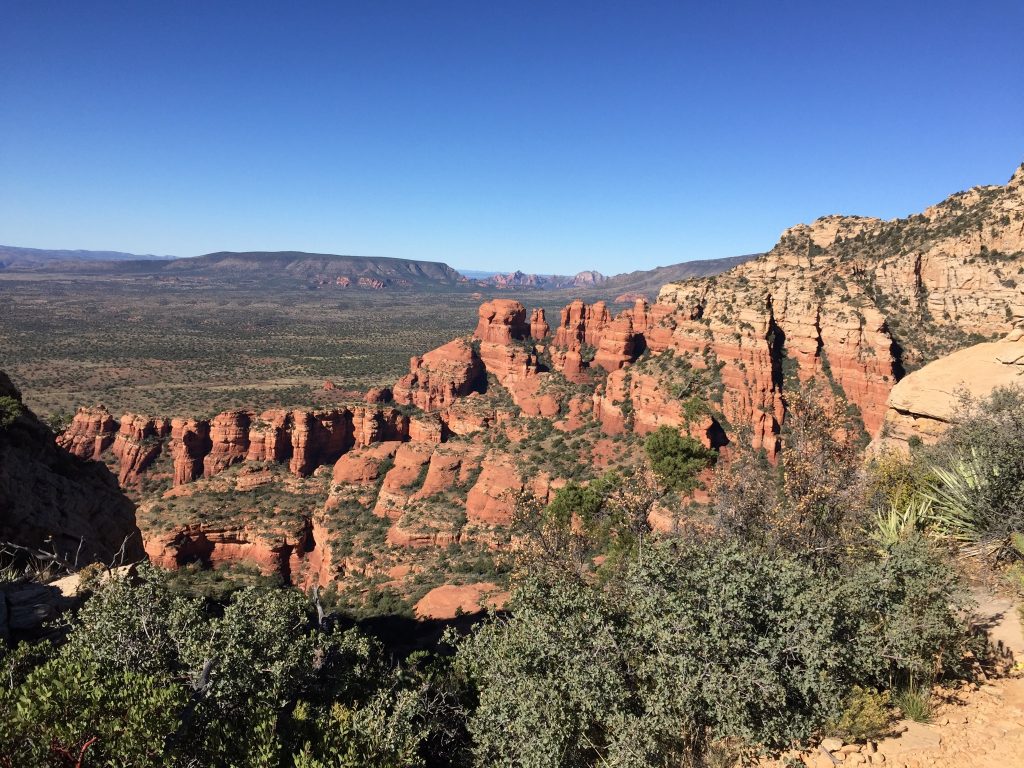 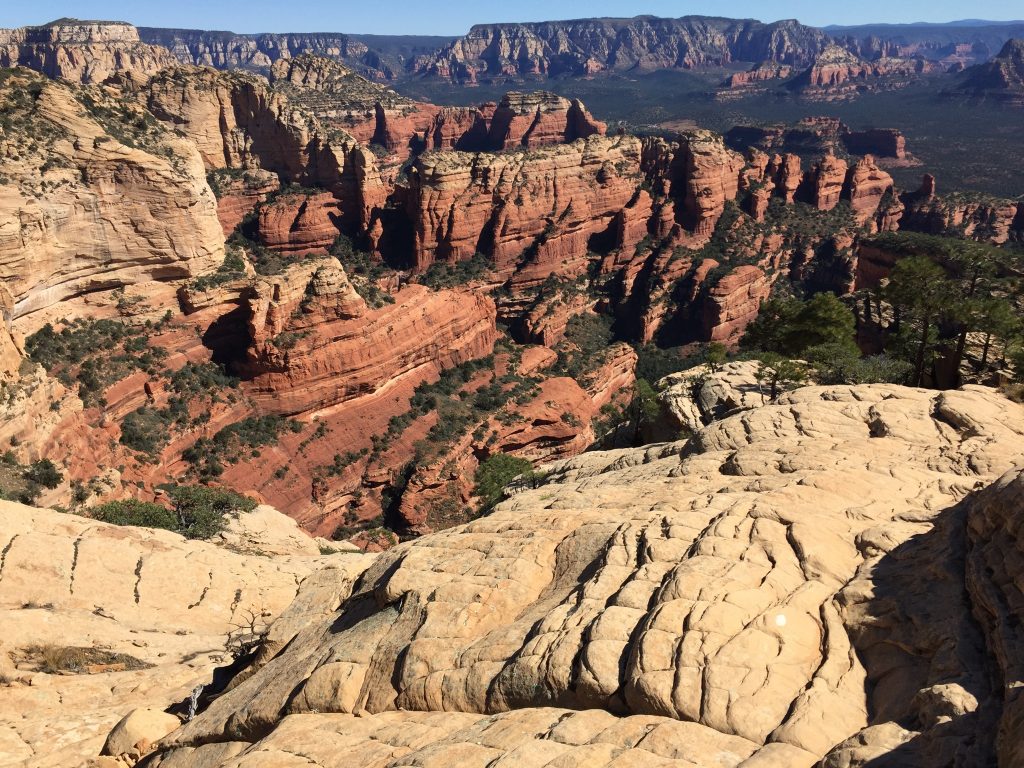 Bear Mountain is a giant mesa which rises steeply on all sides. The high point is located well past the end of the trail. Looking back down the area that the trail traversed. 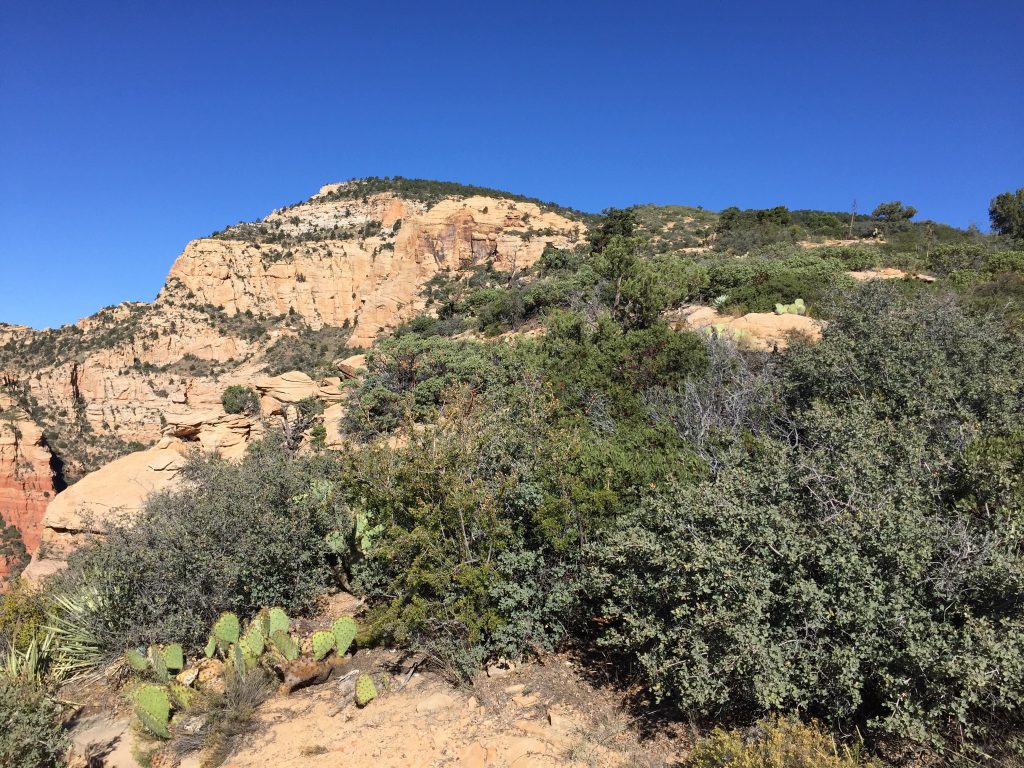 Looking up toward the East Summit of Bear Mountain.

From Sedona, we started our drive to Moab on a snowy morning, especially around Flagstaff. With improving weather, we decided to detour to the Grand Canyon’s South Rim. After a lunch break, the snow settled in and soon covered the roads. The motorhome handles snowy roads much better than you would expect. But we still had a lot of “white knuckle” driving ahead of us. We drove in these poor conditions to the Blanding Trading Post on the Navajo Reservation where we secured a spot in the RV Park. 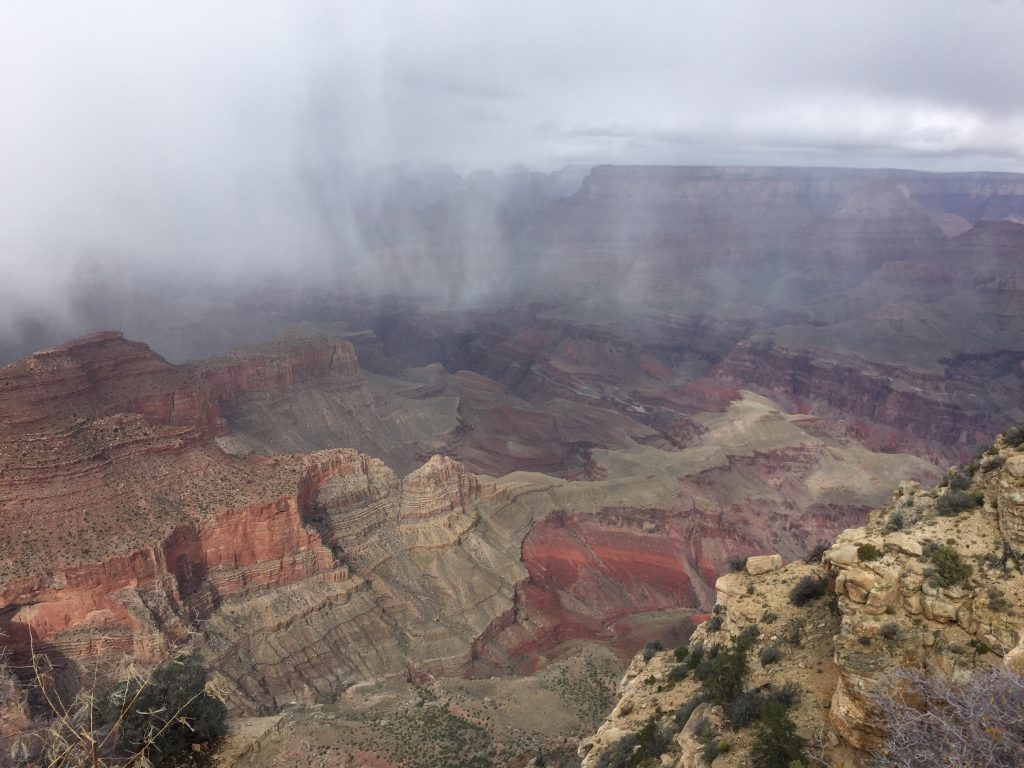 Snow flurries over the Grand Canyon. 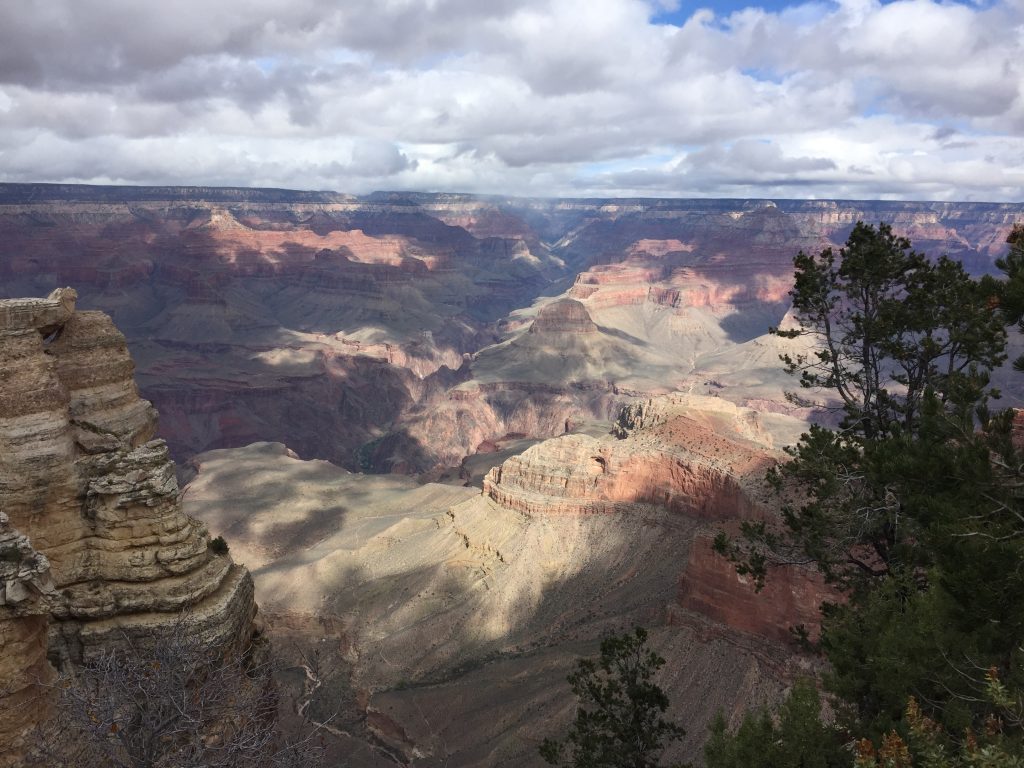 The next morning, the skies cleared and we finished our drive to Moab where we hooked up with Scott and Karin Bates. 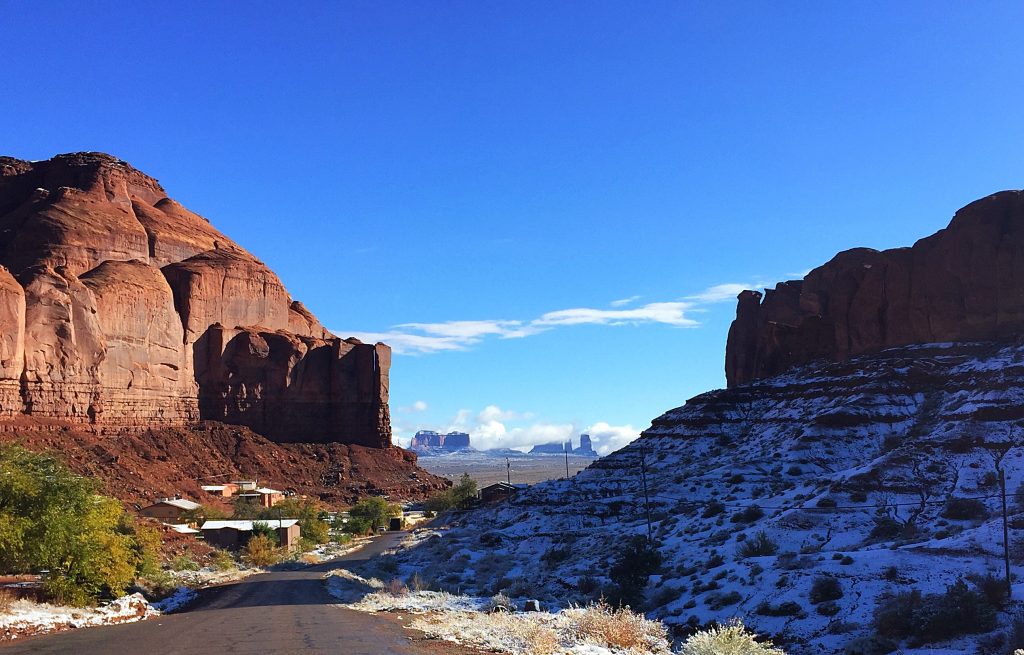 The view from the RV Park at the Blanding Trading Post.

Monument Valley vista on the way to Moab.

We seldom take the most direct route. We decided to visit Rainbow Arch National Monument. The state highway turned to dirt and ascended what appeared to be an impregnable cliff. Photos just don’t do the climb justice. 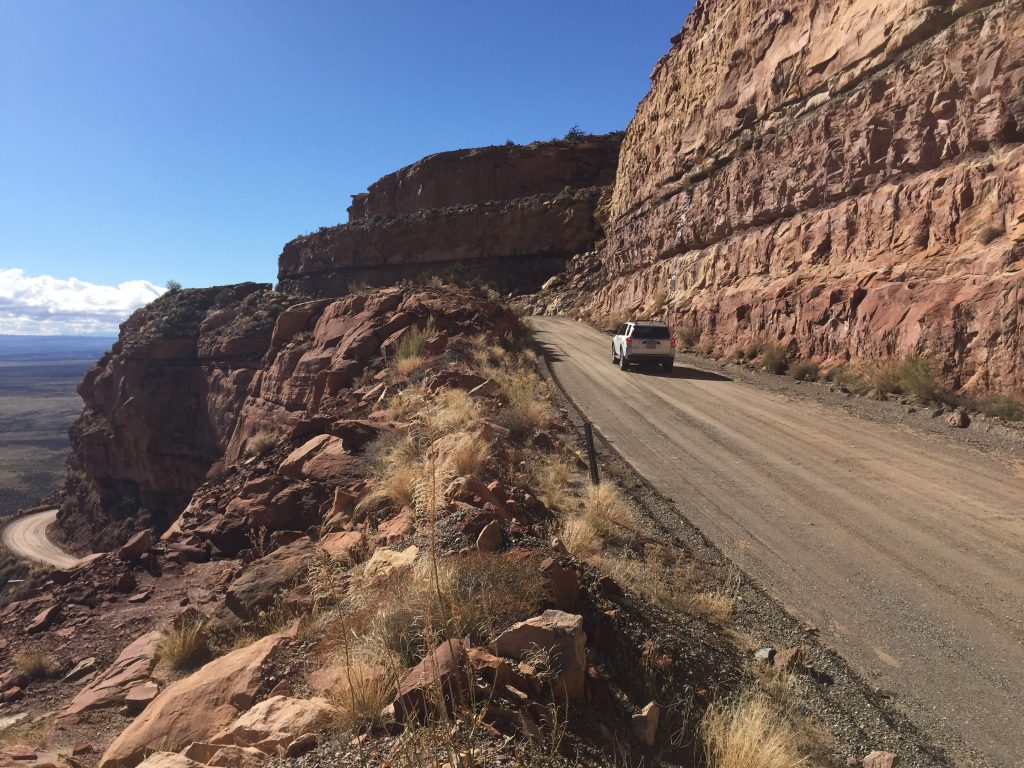 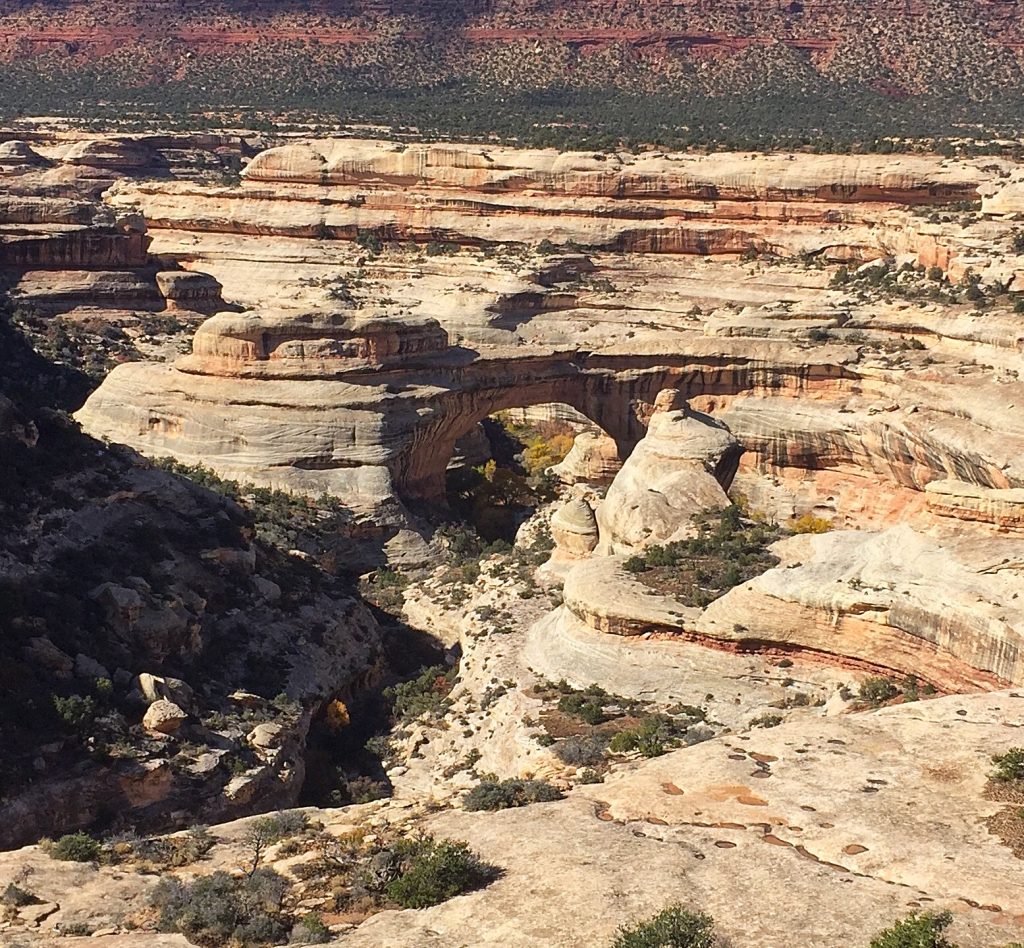 The Moab Folk Festival is held the first weekend in November every year. Over the past 12 years, we have heard many talented musicians at the venue including Tom Russell, Jimmy Lafave, David Lindley, Patty Larkin and Greg Brown to name a few. Moab in November is usually warm and uncrowded compared to Spring and Summer. 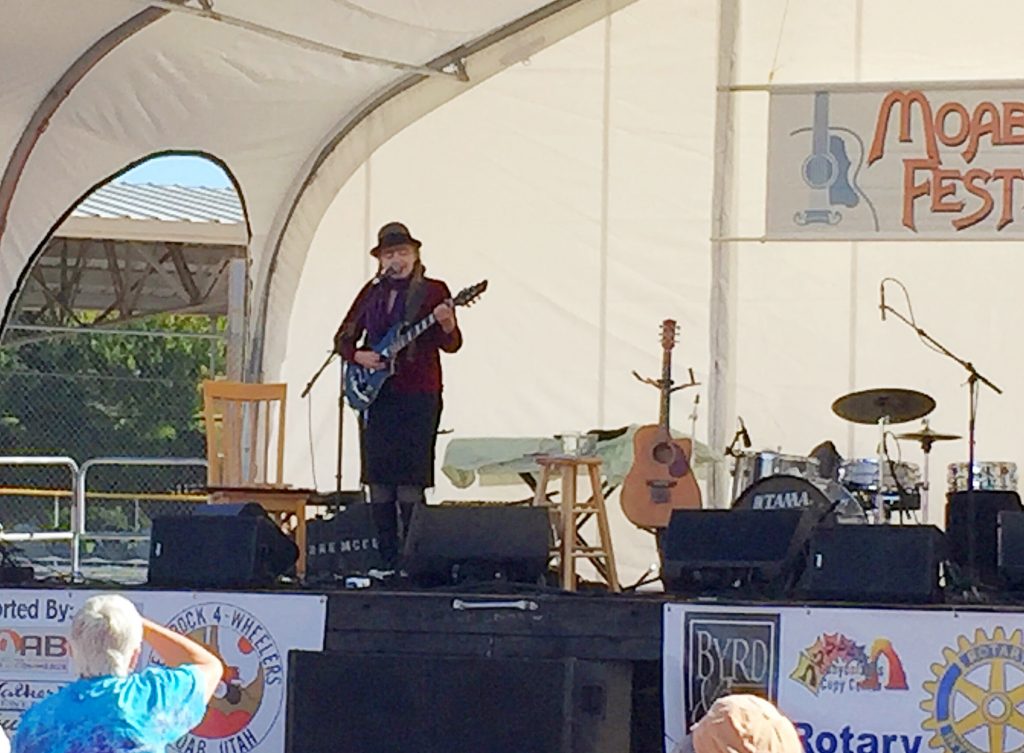 Anne McCue at the Moab Folk Festival. This Australian performer stole the show and was voted the People’s Choice after performing a mix that included original songs, jazz classics and Hendrix’s Voodoo Child. 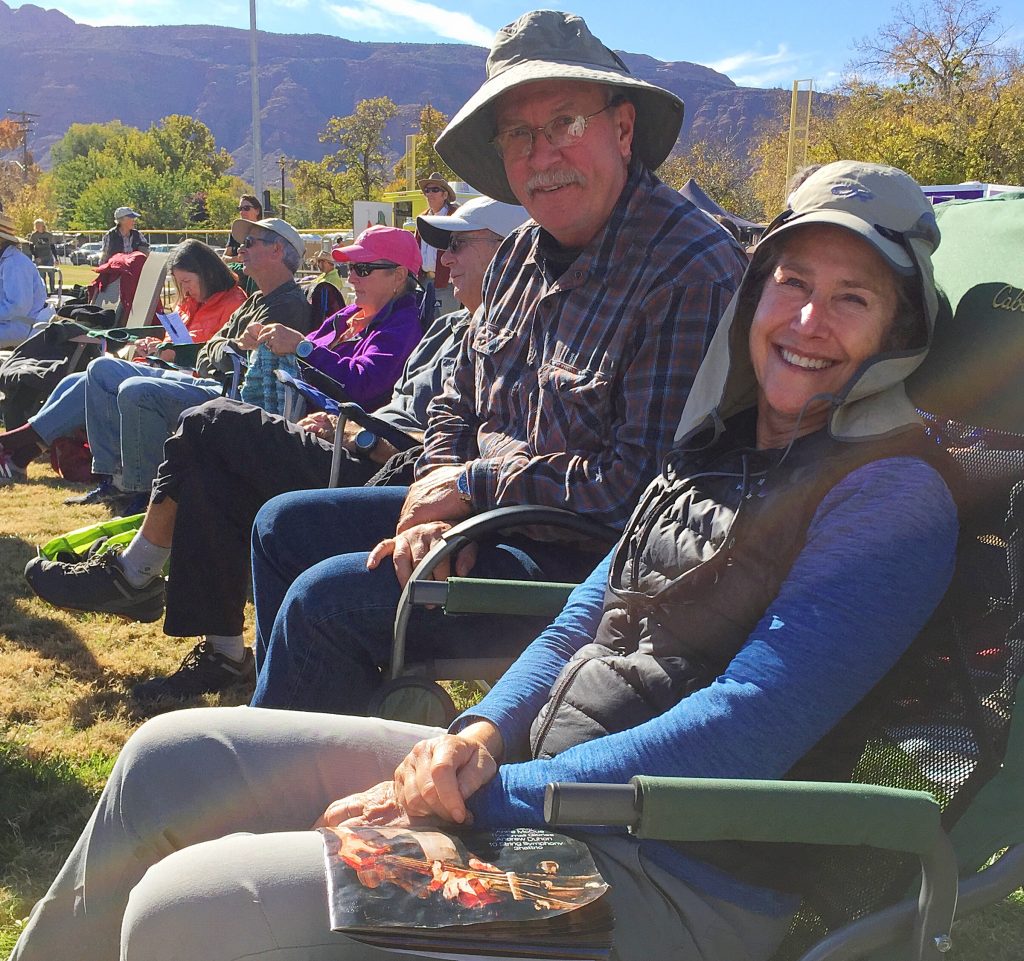 Before the music festival, we spent time hiking in the northern section of Canyonlands National Park. There are a lot of short trails that take you to incredible scenery. 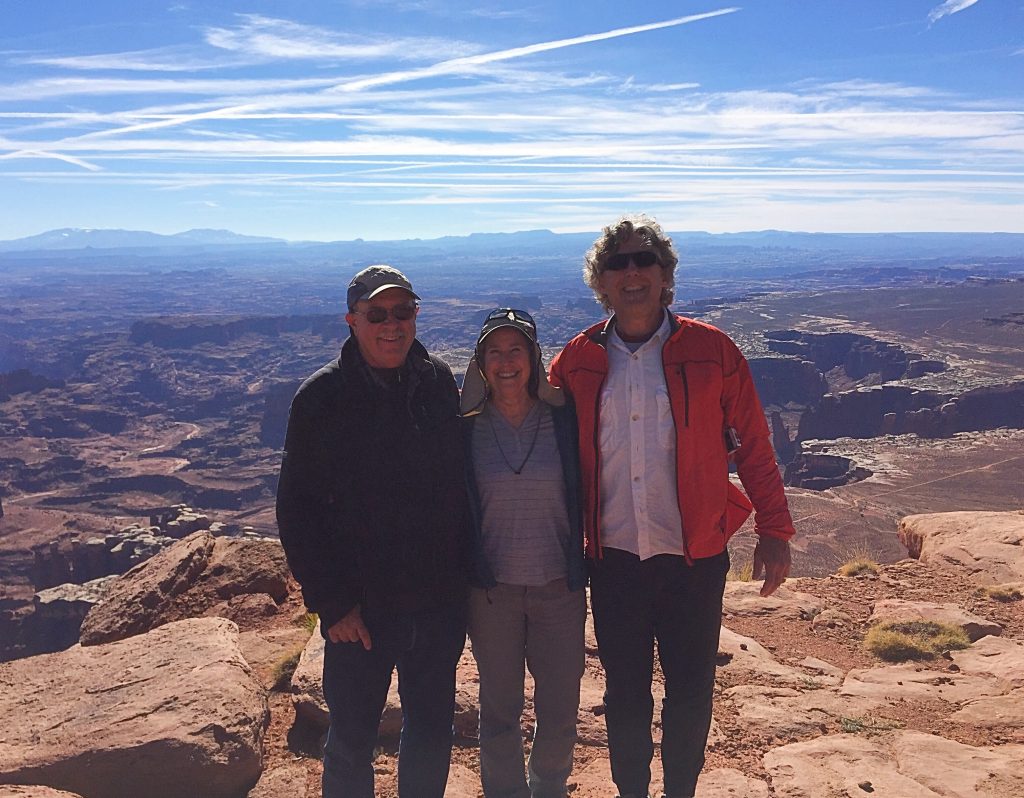 We spent a lot of time in the northern section of Canyonlands National Park. Laurie Durocher Photo 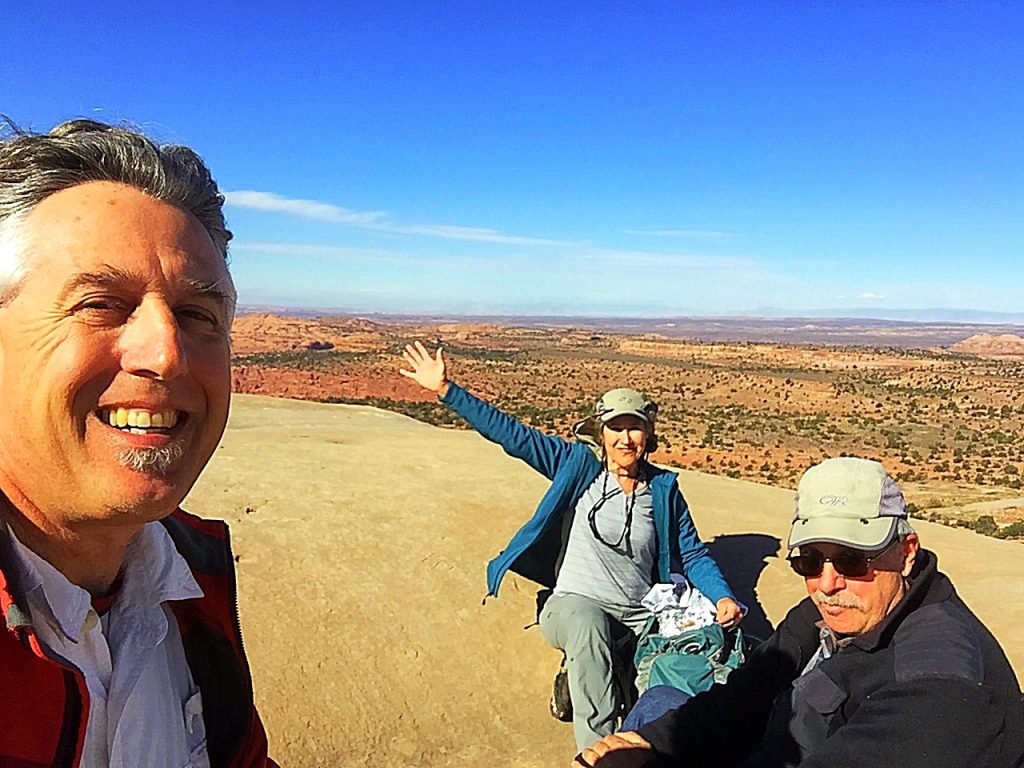 On the summit of Shaft Benchmark after a Class 4 climb. This was my 100th summit of the year. 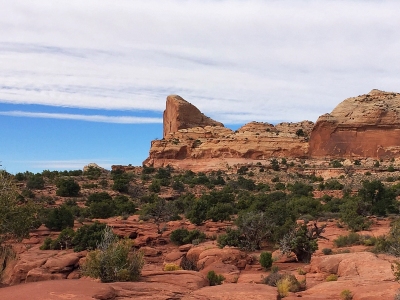 Shaft Benchmark as viewed from the parking area where we started.

After the festival, we drove down to the Pinnacles Section of Canyonlands to camp and hike for several days. From the campground, you have access to an extensive trail system that traverses red rock and deep canyons in a series of connecting loops. 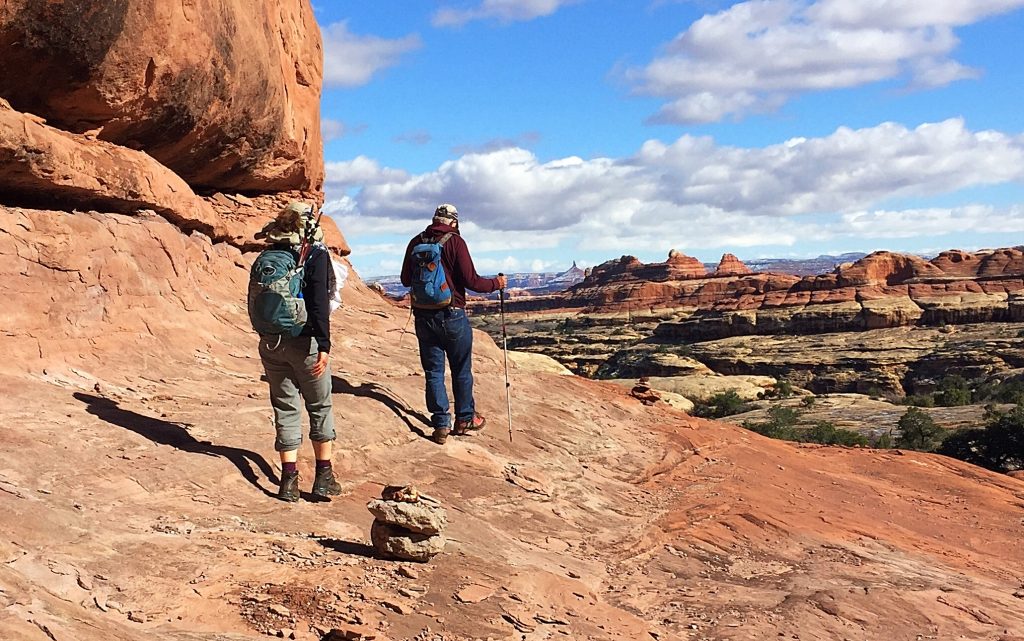 Hiking in the Pinnacles Section of Canyonlands National Park. 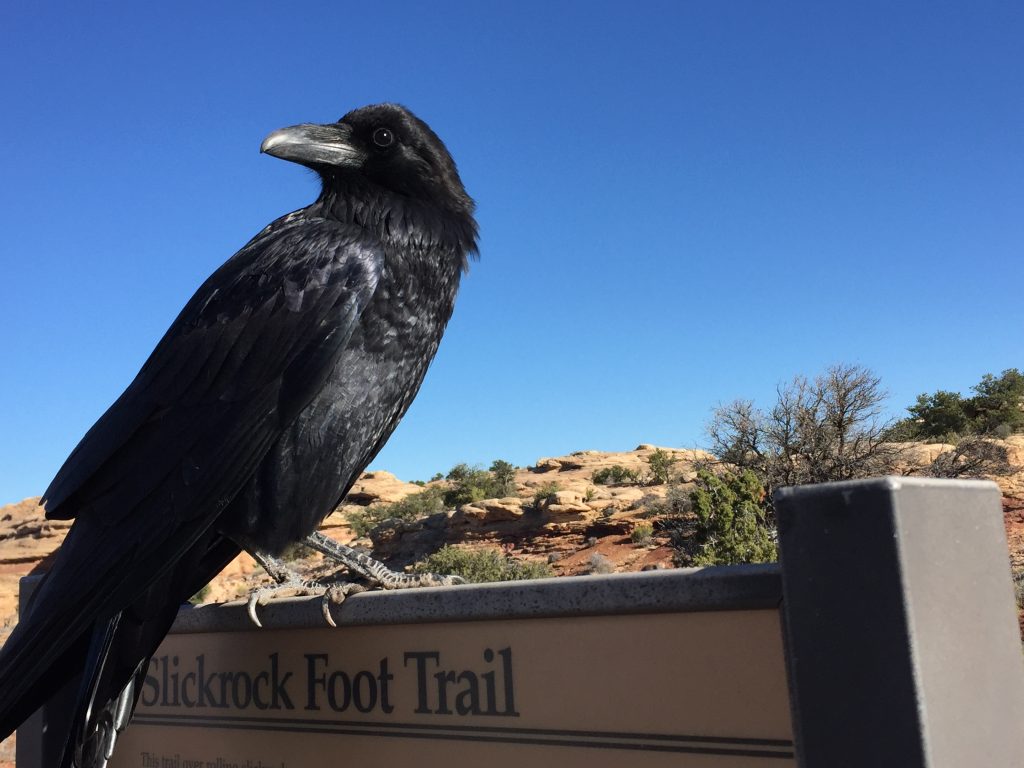