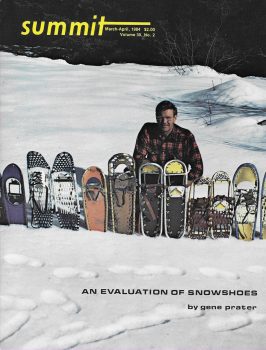 The Albion Range is Idaho’s most important destination for climbers south of the Snake River, offering opportunities for bouldering, technical rock climbing and scrambling. The range extends north from the Utah border for 25 miles to a point just southeast of Burley, Idaho in the South Central part of the State. Included in its inventory are Cache Peak (10,339 feet), the highest point in Idaho south of the Snake River and the City of Rock, a concentration of granite domes and spires which is the premier rock climbing area in the State.

The Albion Range is typical of the nearby Great Basin Ranges with which it shares many similarities. A variety of environments are present to stimulate the senses, ranging from bare and windswept summits to thick stands of Douglas fir to arid desert-like lower slopes. It is among these dry lower slopes that the City of Rock is situated. Water is present throughout the range, although its quality cannot be guaranteed. The surrounding country is big and open, with smaller north-south trending mountain ranges interspersed by wide sagebrush-covered ﬂats. An exception is the Raft River Range (located just south of the Idaho border) which runs in an uncommon east-west direction (see Summit, November/December 1972).

Historically, the range gained early notoriety from its association with the Oregon Trail. In fact, the “Silent City of Rock” not only fascinated the early immigrants in who traveled west over the Oregon Trail but also served as a major junction along the route. It was from this point that many pioneers broke off to follow either the Hudspeth Cutoff Trail or the Salt Lake Cutoff Trail. In the early 1860s, over 50,000 immigrants passed through the City in a single year.

The geology of the range is highlighted by the granitic Cassia Batholith which pushed up through the earth’s crust. The range is formed by 2 large, rolling ridges which accumulate into 2 main summits: Mount Harrison (9,265 feet) in the north and Cache Peak in the south. A glacial cirque is nestled into the East Slopes of Cache Peak. The cirque holds several high lakes which are the only mountain lakes present in Idaho’s 27 mountain ranges south of the Snake River. While overlying sedimentary rocks are still present throughout the range, it is the batholith’s granite that is of primary interest to climbers.

Unlimited technical climbing is available throughout the City of Rocks. These opportunities are situated in 4 main locations: the head of Circle Creek, the main formations in the City of Rocks proper, the Castle Rock area and the Twin Sisters. While climbing in the City has never been documented, many of the formations have been informally named and established routes exist on most of them.

Climbers who have visited this out-of-the-way place feel that it is one of the finest climbing spots in the United States. The granite has a rough texture which is perfect for friction climbing. Although most routes are from 1-2 pitches in length, there are an infinite number of routes available. The large variety of shapes present a wide spectrum of daring problems from cracks to chimneys, large faces and obelisk-shaped spires. Climbing is best in the Spring when the City’s arid desert-like climate warms up long before surrounding mountains have even begun to melt out. During the Memorial Day weekend, many climbers from all over Idaho, Jackson (WY) and Salt Lake City congregate at the City.

The heart of the City of Rocks is owned by the State of Idaho and is technically called a State Park, although no development has taken place or is planned. This area is easily reached by road and contains a number of impressive formations including Window Rock, Bath Rock and Morning Glory Spire. Elephant Rock is one of the most prominent formations. Located at the City’s main entrance, the rock is only 50 yards from the road for those who have absolutely no interest in hiking.

The upper valley can be reached by a trail from Elephant Rock. A trail leaves the parking area and generally follows a fence line for a mile into the upper reaches of Circle Creek. There are no signs. The Box Top and Lost Arrow formations are the most important of the dozens of formations located along Circle Creek. Even on a busy Memorial Day weekend, when climbers wait in line to do a crack on Elephant Rock, this area sees relatively little use. The Twin Sisters formations are located over one mile south of the main City of Rocks. The BLM has a formal campground (Smoky Mountain Campground) as well as over 80 individual campsites scattered throughout the City of Rocks. The Twin Sisters tower over 600 feet above the valley floor and hold a number of challenging routes.

The agencies are united in recognizing the significance of the area but each have different management goals for the sections of the City under their control. Problems arise from heavy Memorial Day use which brings in a heavy concentration of climbers, family groups, 4WD enthusiasts and sightseers. In short, people camp everywhere and where people camp, human waste is sure to accumulate. The quality of City’s perennial streams is doubtful due to this pollution.

Public access is the second most pressing problem at the City. Many of the formations are located on private property behind “No Trespassing” signs. Although climbers regularly use this private property, continued access is not guaranteed as private landowners could exercise their rights at any time and restrict the use of their property. Approaches to the Castle Rock formation have already been closed to the public. Both the Forest Service and the Bureau of Land Management have acknowledged the need for public access to this area but, at this time, the agencies are either without funds or enough public pressure to move ahead.

Management of the majority of the Albion Range is by the Sawtooth National Forest. Many sections along the range‘s foothills and in the City of Rocks are managed by the Burley District of the Bureau of Land Management. Finally. the State of Idaho controls several sections of land in the area, including 640 prime acres in the heart of the City of Rocks.

ID-27 and ID-77 are on the range‘s west and east sides respectively. A combination of County and Forest Service roads penetrate the southern part of the range. To visit the City of Rocks, drive along I-84 to the Sublette/Malta Exit. This exit is located roughly 32 miles north of the Utah border. Drive west from the exit to the village of Almo on a good paved road. A good 6-mile dirt road leads from Almo to the City of Rock.

Four 7.5-minute USGS quadrangles cover the region: Conner Ridge, Mount Harrison, Cache Peak and Almo. Furthermore, the BLM sells a surface management map that displays the land ownership patterns which is especially helpful for identifying public and private land. The one covering the City of Rock is the BLM Oakley map.

There are no published climbing guides to the City of Rocks. However, several different individuals are working independently to produce the first climbing guides. In the near future, there may be an overabundance of guides available. The following offices are responsible for the day-to-day management of the Albion Range and City of Rocks: Bureau of Land Management/Burley District Office (Route 3, Box 1; Burley, Idaho 83318); USFS/Burley Ranger District (2621 South Overland; Burley, Idaho 83318); Idaho Department of Parks and Recreation (2177 Warm Springs Avenue; Boise, Idaho 83720). 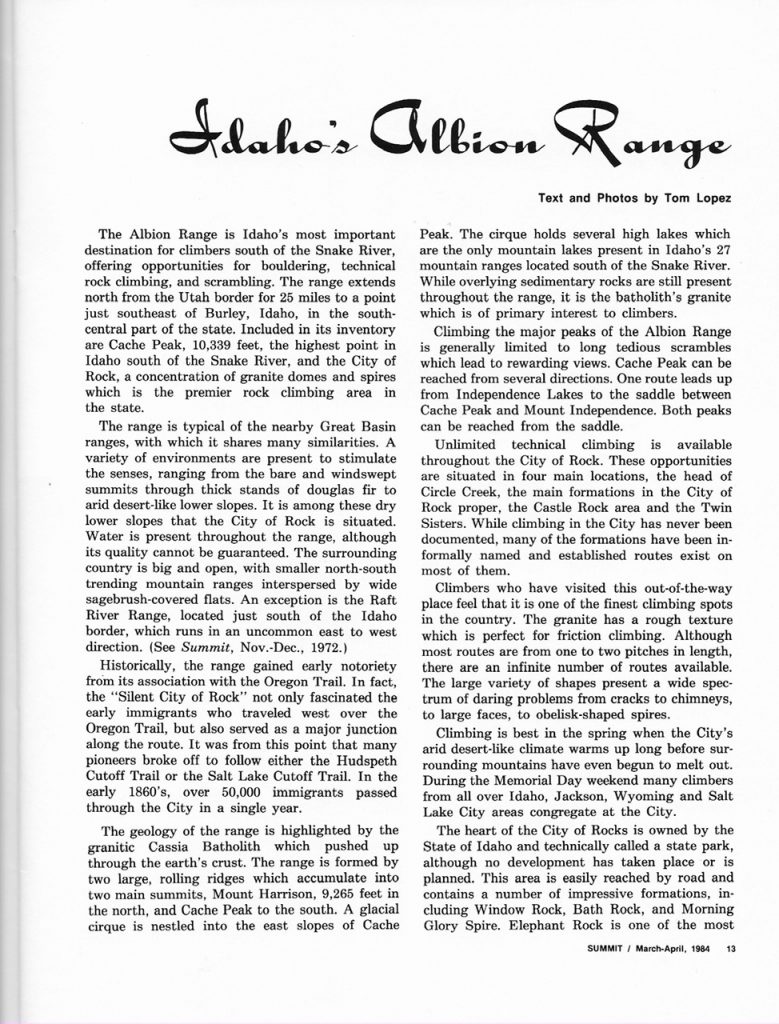 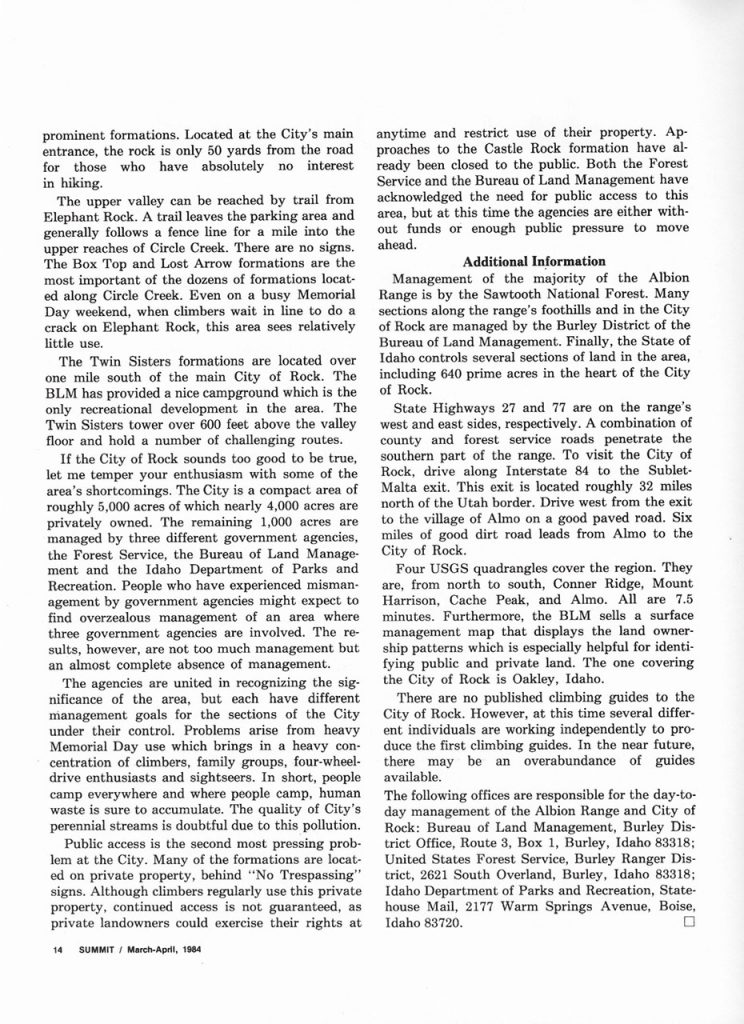 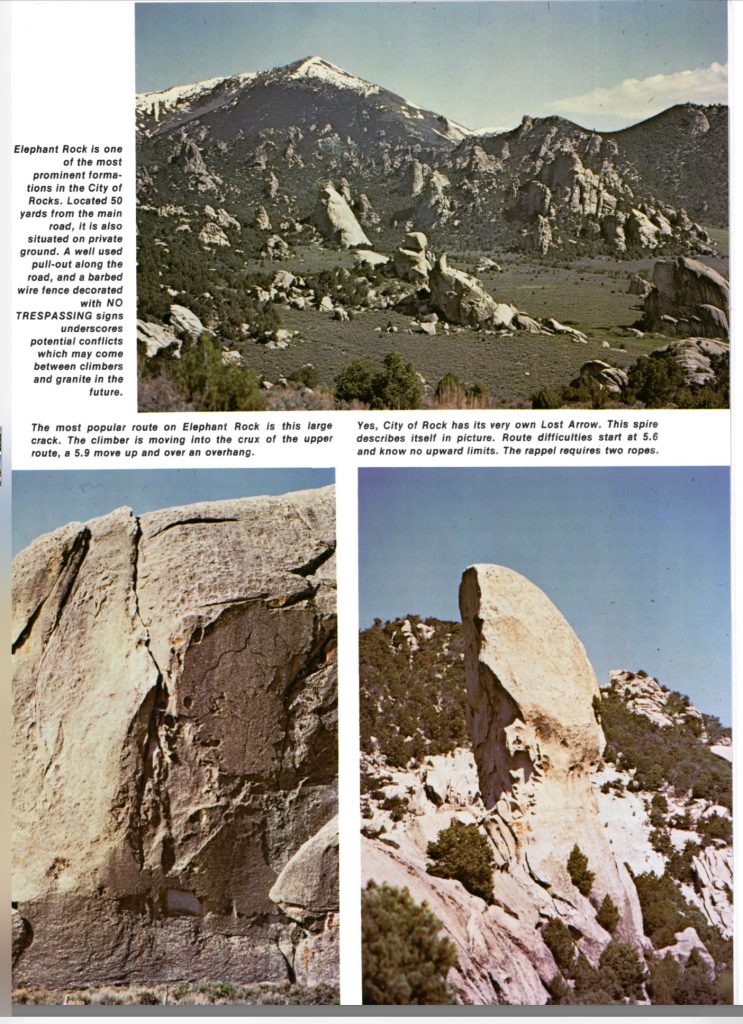