I first visited Death Valley National Park (actually it was only a National Monument at the time) in 1978. During that trip I climbed Telescope Peak, the highest summit in the park. I found the Park’s stark desert mountains compelling. In 2014, Laurie and I spent a few November days in the Park and climbed three peaks by Dante’s View as well as exploring Titus Canyon and several other attractions. After that visit I decided it was time to go back and do some serious peakbagging. I managed to convince John Platt to accompany me–not a hard sell. We left Boise early February 21st and made the ten hour drive to the Mesquite Springs Campground. Although November temperatures can exceed 90 degrees, we had blustery conditions that evening. [See John’s extensive trip report.] 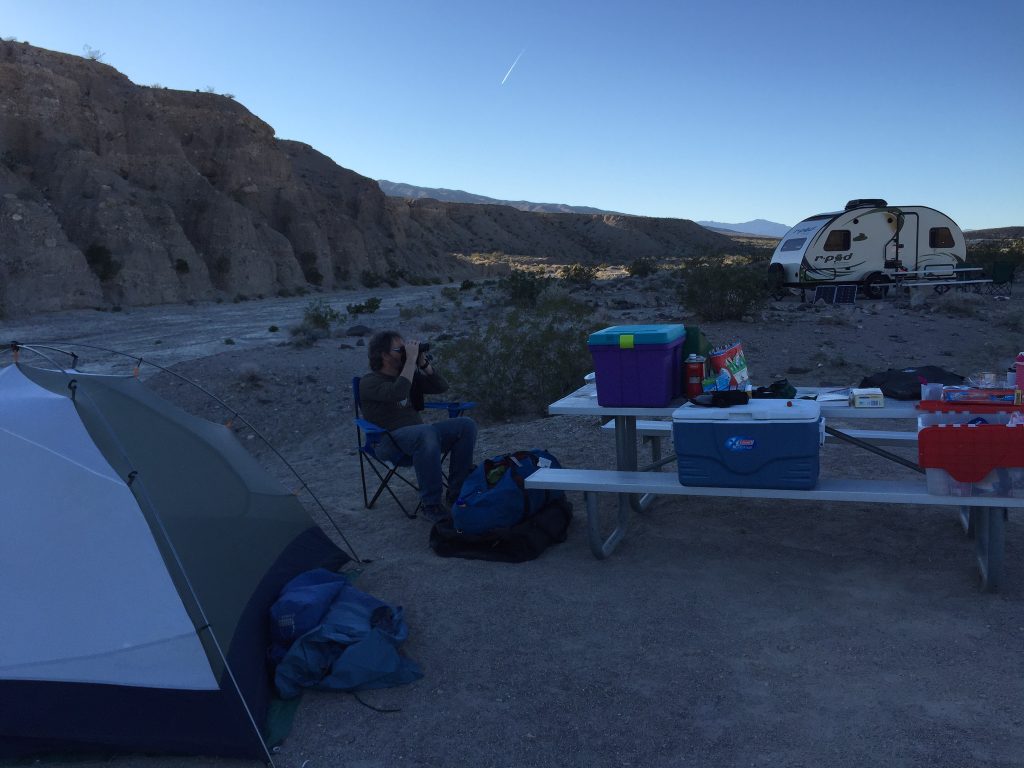 Our camp at Mesquite Springs.

The next morning was a Sunday and we planned to spend it exploring this great desert cathedral. We left camp and drove north on the gravel Big Pine Road to kitschy Crankshaft Junction. We turned left at Crankshaft Junction and drove to the pass north of Sandy Peak, 7,062 feet. 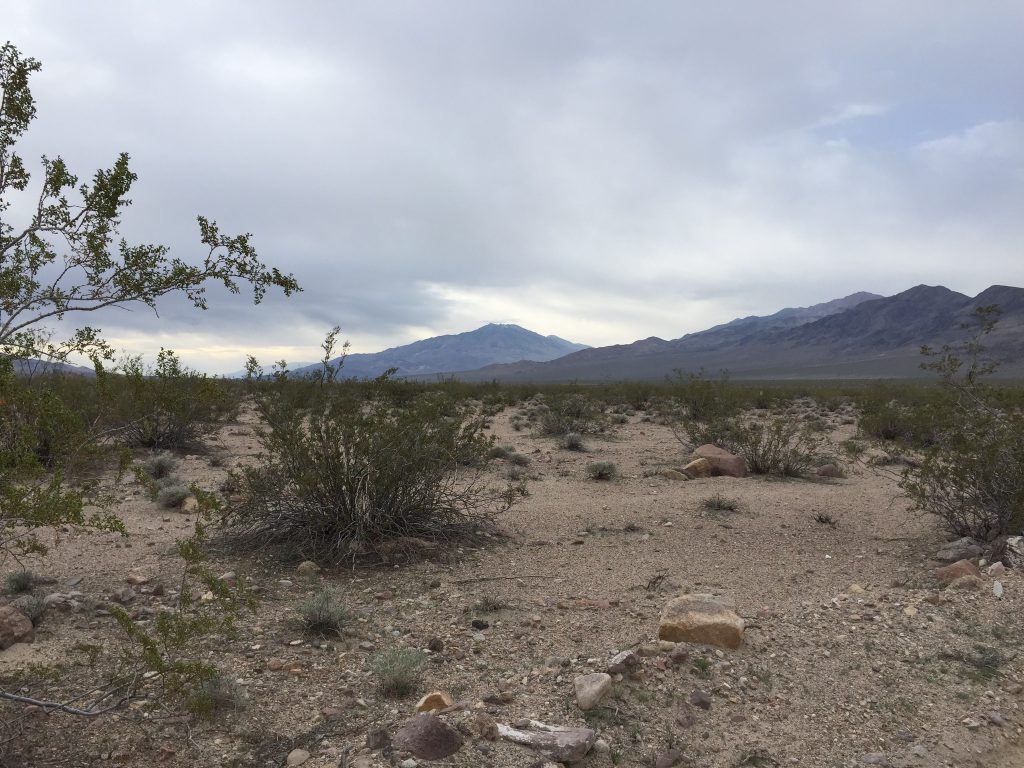 On the way to Sandy Peak. 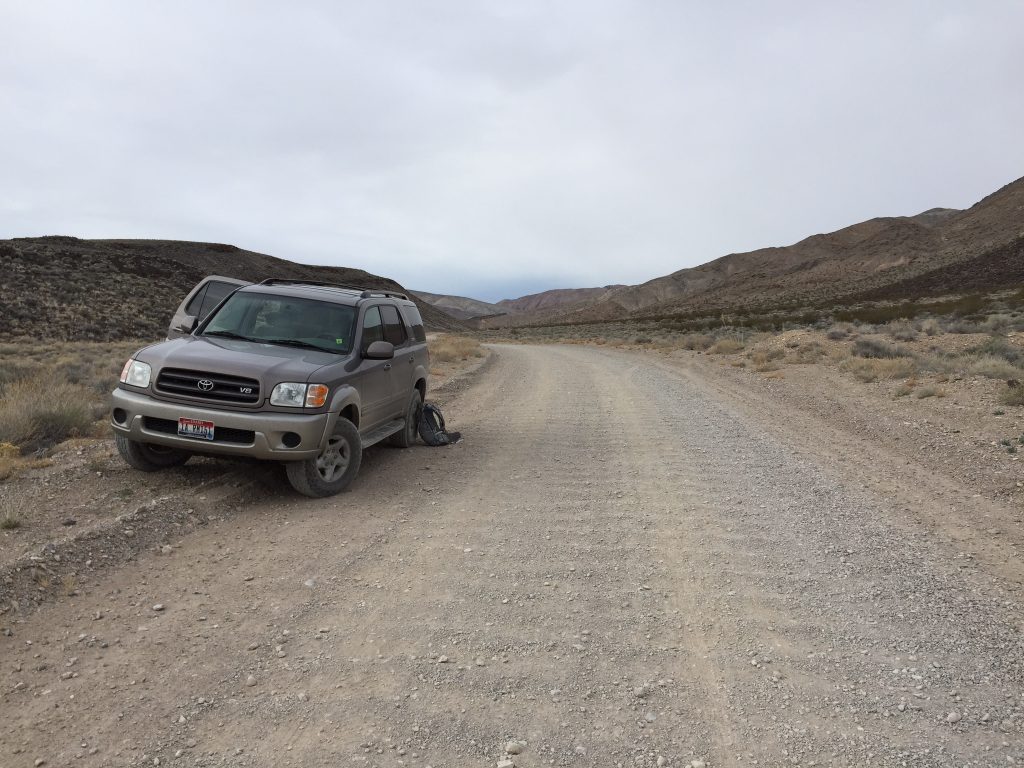 Our starting point for Sandy Peak.

From the pass or route crossed a sagebrush littered plain to a canyon. After climbing and exiting the canyon we accessed a long ridge leading to the summit. At times there was a game trail we could follow. We stayed on the ridgetop reaching the summit in roughly six miles as snow flurries and wind buffeted us. The low clouds killed the allegedly super views we had hoped to experience. 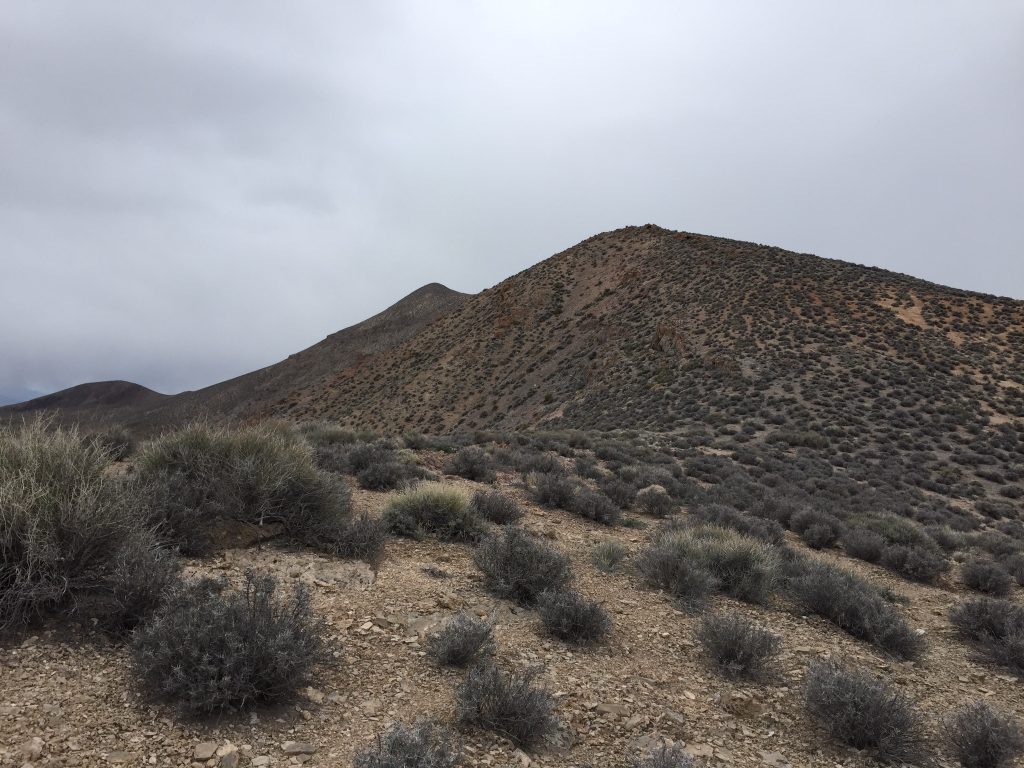 Sandy Peak in the distance. 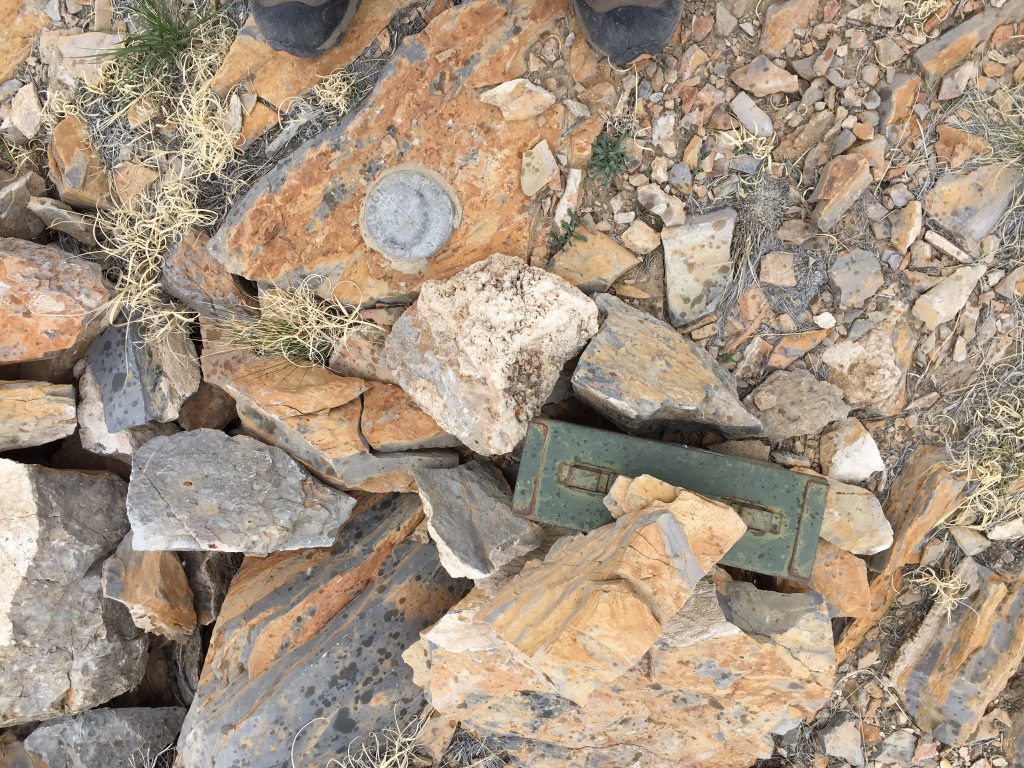 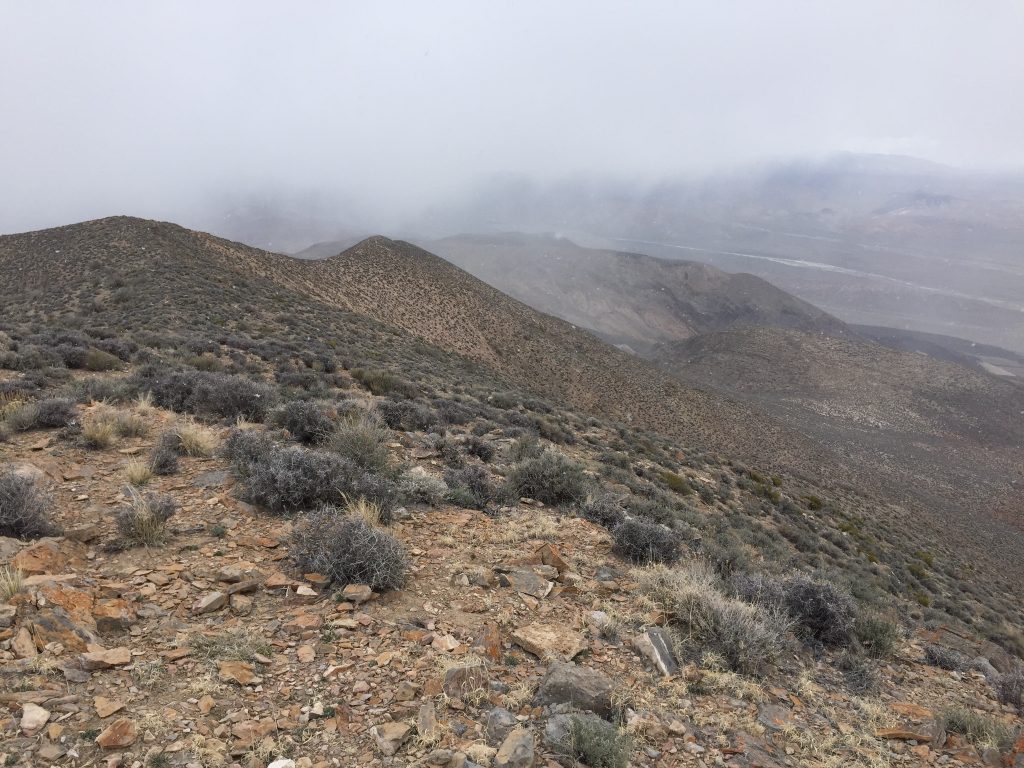 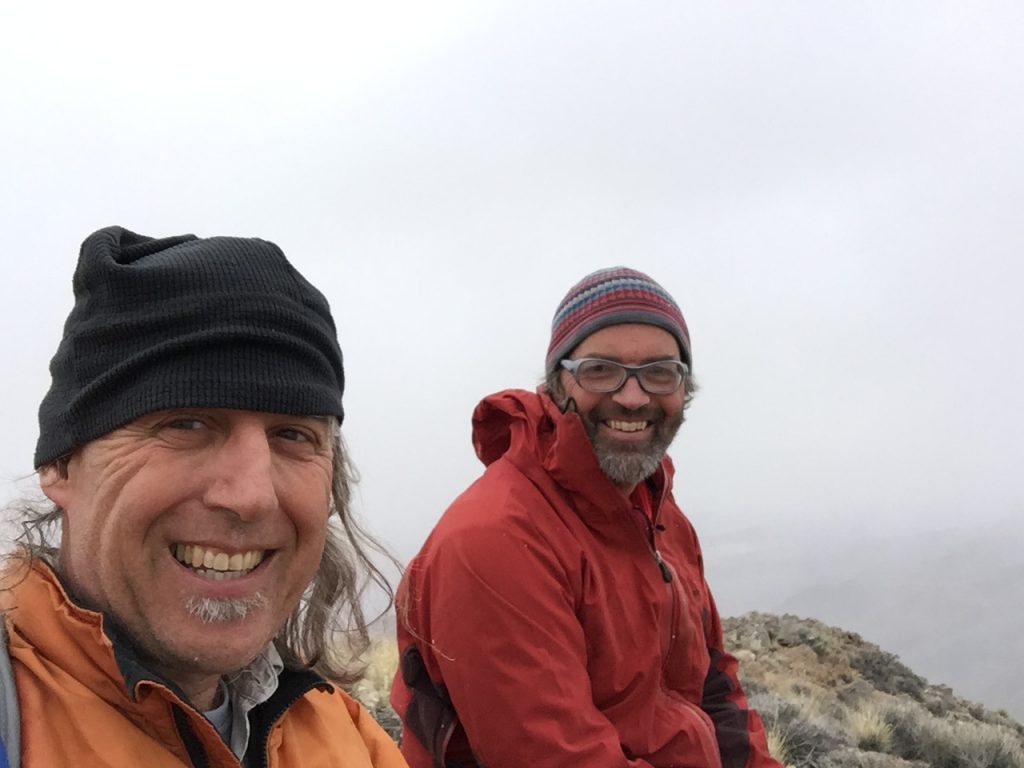 Happy to be here

After returning to camp it started to really rain and blow. I spent the afternoon reading in the truck and we ate a cold dinner because it was to miserable to cook outside. It was not the warm weather we expected but still better than Boise weather.

The next morning packed up and drove to Daylight Pass to climb Daylight Peak, 5,549 feet. Our route climbed up steep talus slopes, through fresh snow to the summit ridge. The summit block was Class 3. The weather was warming up as we headed to our second peak, Daylight Castle, 6,075 feet. We dropped down the Daylight’s north ridge to the saddle connecting the two peaks and then proceeded up Daylight Castle’s south ridge till we ran into cliffs that we skirted to our left. Upon reaching the summit ridge it took a while to figure out which tower was the highest. John decided to try the tower to our left. We worked around its base and spotted a climbable chimney which was Class 3+ or 4. 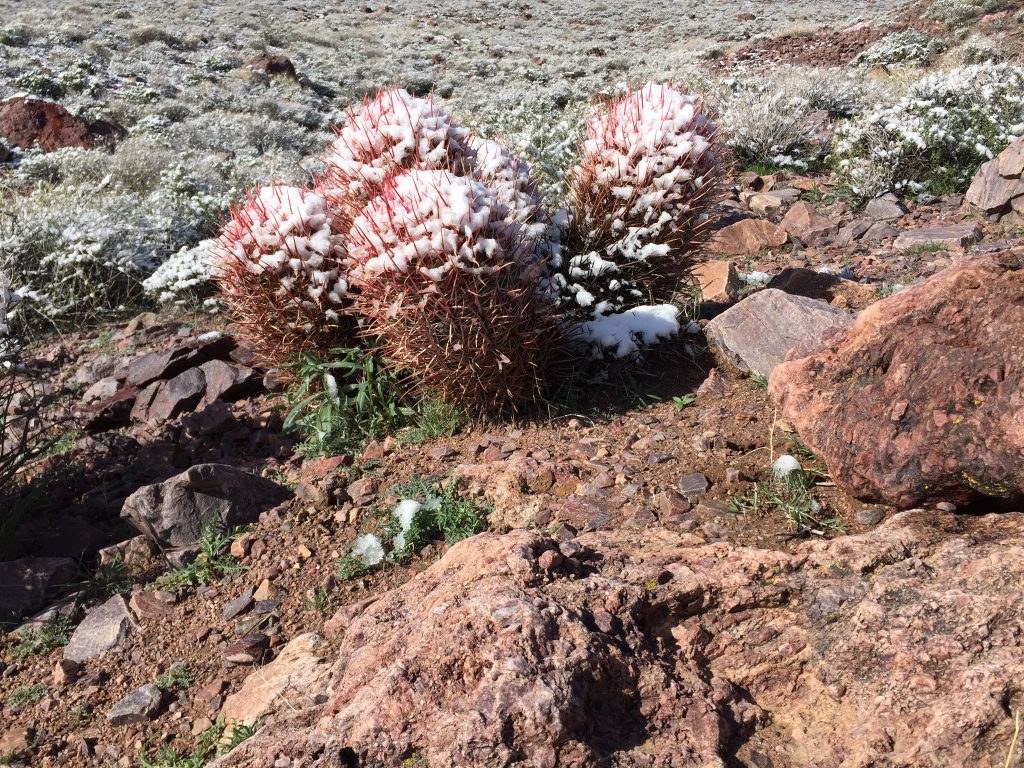 A cold start to our second day. 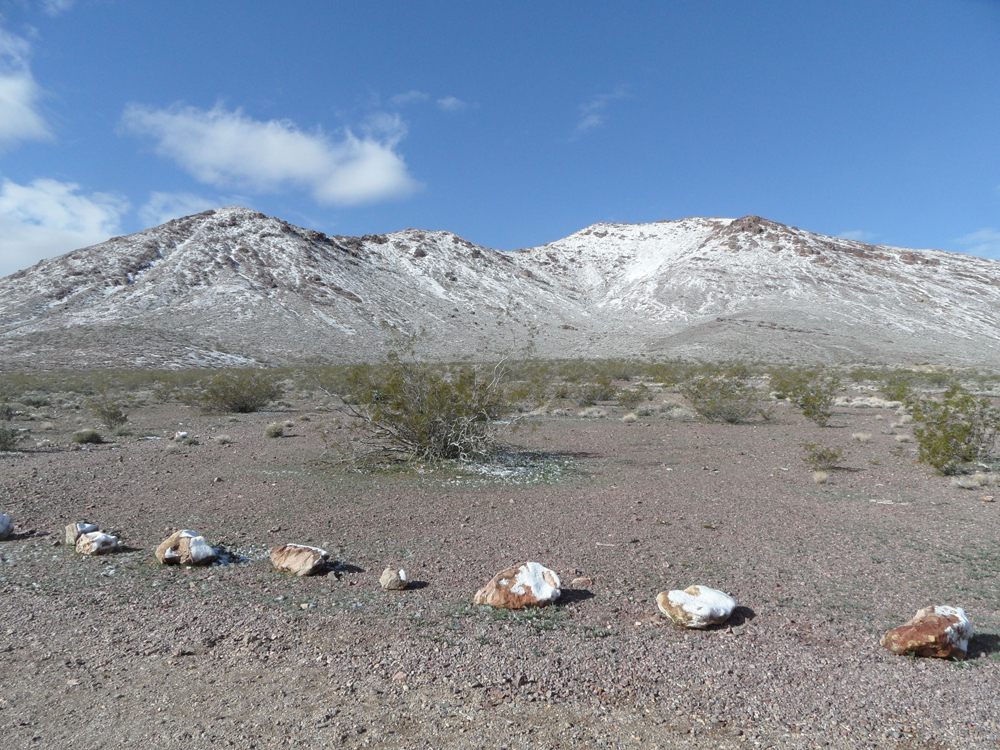 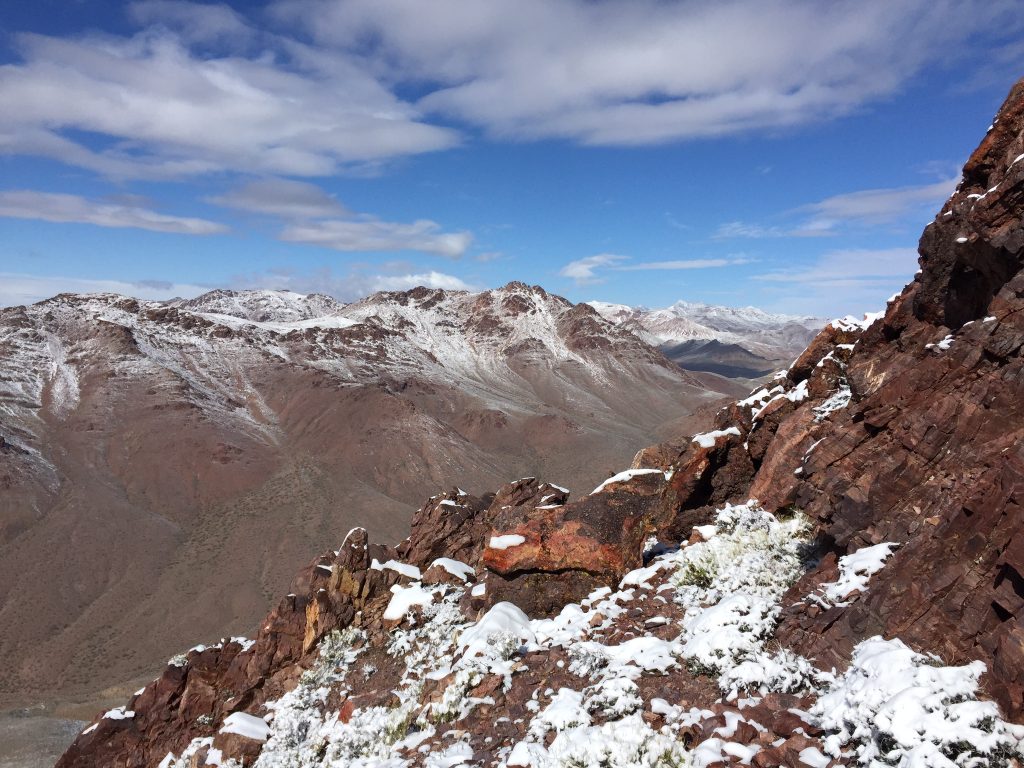 Daylight and Daylight Castle where Class 2 climbs until their summit blocks. 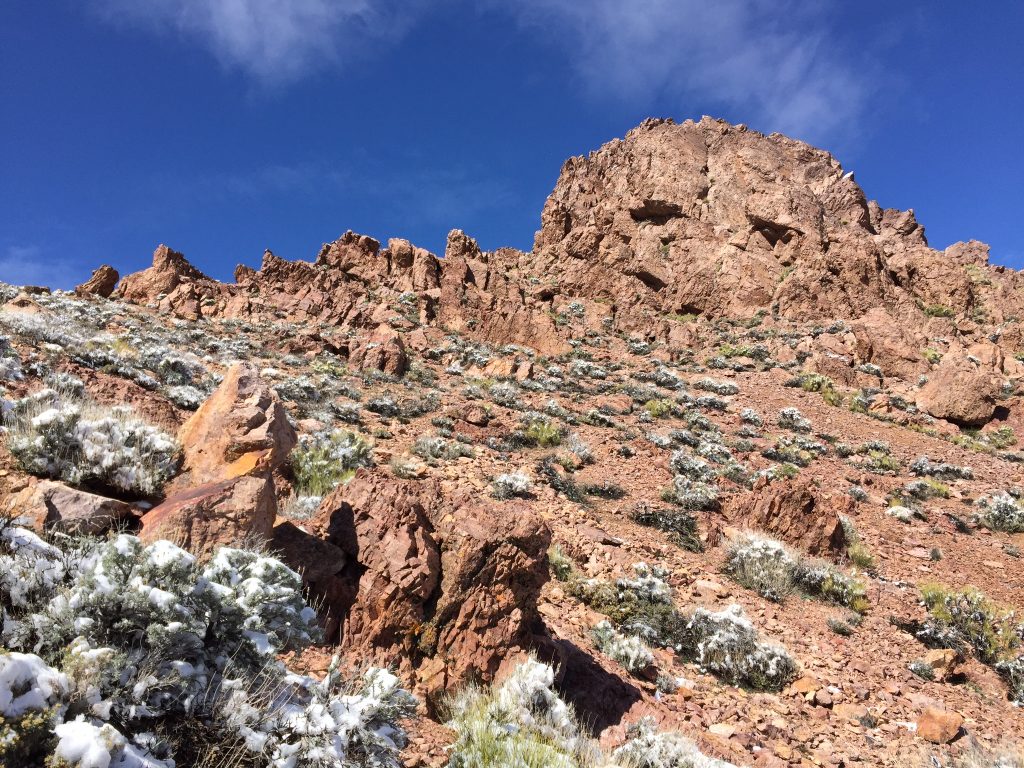 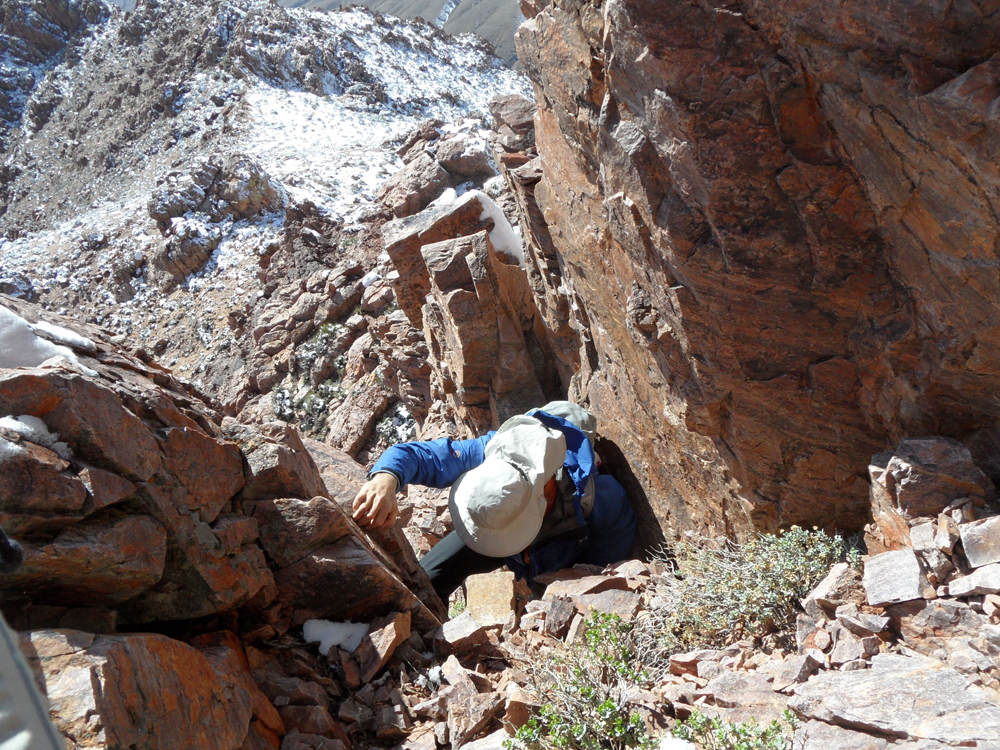 We decided to spend the night in Beatty, Nevada, since John “needed a WiFi connection to keep my employers happy.” I don’t think John enjoyed Beatty but the old mining town is a “gem” (pun intended) in my book. We had beer and steak at the Sourdough Saloon, a great rustic bar with a lot of character and even a few customers.

On the 24th or goal was Thimble Peak, 6,331 feet. Thimble is a enticing peak. The best access is from the Titus Canyon Road a popular one-way, 4WD road. To reach the peak from Beatty, we turned off the highway at a well signed intersection with not only a sign for Titus Canyon but also a few dire warning signs. We followed the road into the mountains to Red Pass at the head of Titus Canyon and parked. A good climber’s trail leaves the pass, climbing steeply. The first peak on the route was Peak 6108, which of course is 6,108 feet high. From this peak, the trail descends down 400 feet to the saddle below Thimble. From our vantage point, Thimble looks potentially dicey even though it is rated as a Class 1 hike. The trail actually goes all the way to the summit, climbing a couple of steps along the way. The views ranged from the lowest point on the continent, Badwater, to Mt. Whitney which John’s GPS told us was 50 miles to the west. When we returned to the car it was 65°, perfect for a picnic lunch and enjoying the view. After lunch we drove down into Titus Canyon. The road was in good shape and the terrain overpowering. 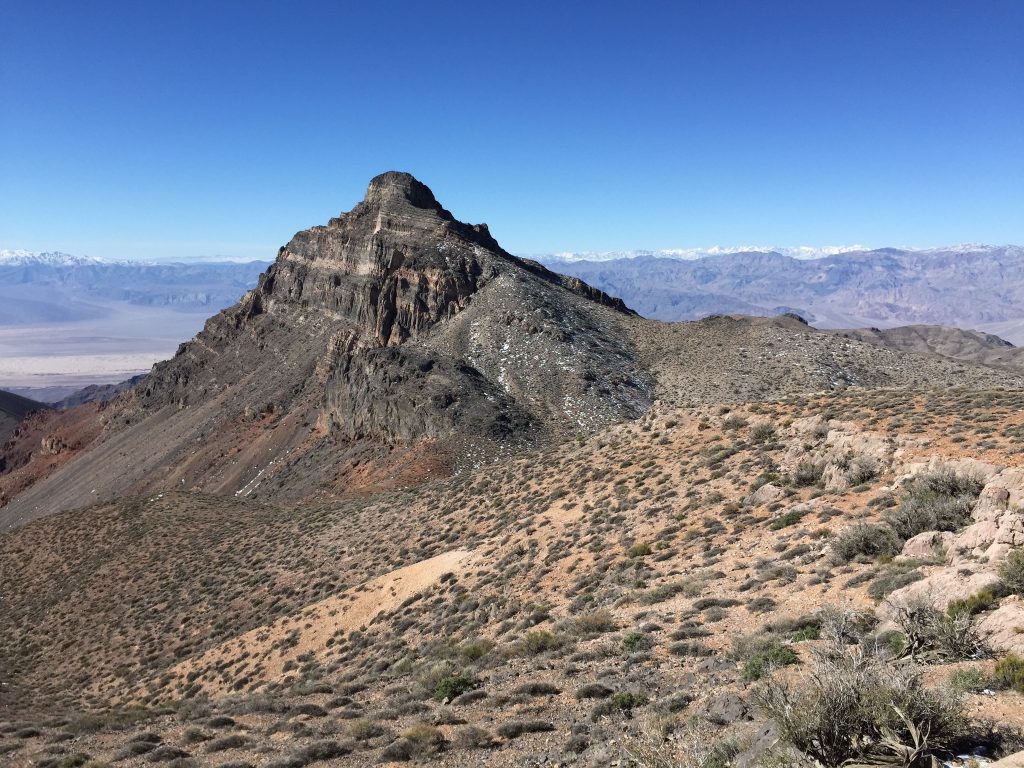 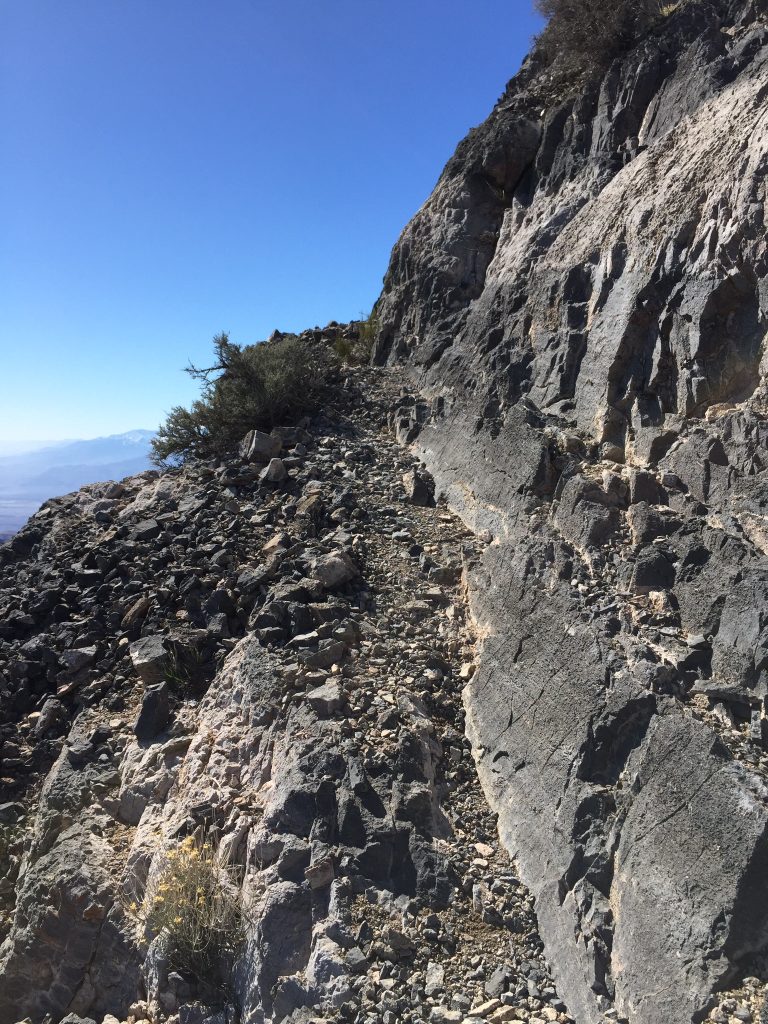 The trail followed limestone shelves up the summit block. 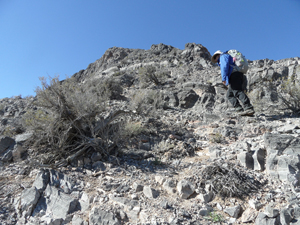 The footing was good all the way.

We drove down to Stove Pipe Wells for more food and, more importantly, beer. We then took a short hike up Marble Canyon before heading to our evening campsite at Emigrant campground, a gravel parking lot of a campground next to the highway with expansive views.

The next morning we were up early driving to Towne Pass, the starting point for Towne Peak, 7,238 feet. Our route to the peak followed followed a broad, wandering ridge to the summit. The hike was eight mile round trip with plenty of up and down over several false summits. The false summits undoubtedly made the walk seem a lot longer. Along the way we spotted an ancient airplane crash on a subsidiary ridge. After the climb we returned to Stove Pipe Wells for lunch and beer. After lunch we drove to Wildrose Campground in the Pannamint Range. Where we set up camp in another campground resembling a gravel parking lot but situated in a beautiful canyon. 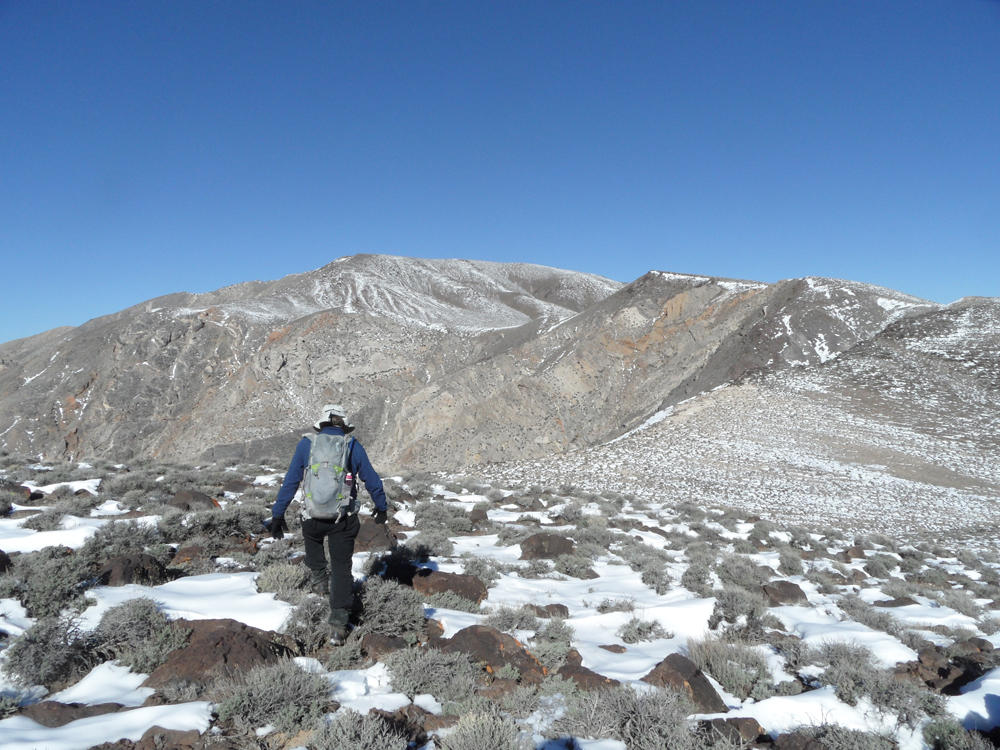 Our goal for the the 26th was Wildrose Peak, 9,064, the highest peak on our agenda. In the morning, we drove farther west into the range to the trailhead at a set of charcoal kilns. Snowline was just above the kilns. We followed footprints through the snow for a couple of miles. The snow got deeper from this point as the trail works its way through a pinyon pines forest and then above treeline to the summit after 4.5 miles. The view from the top included the Furnace Creek Resort, more than 9000 feet below us. 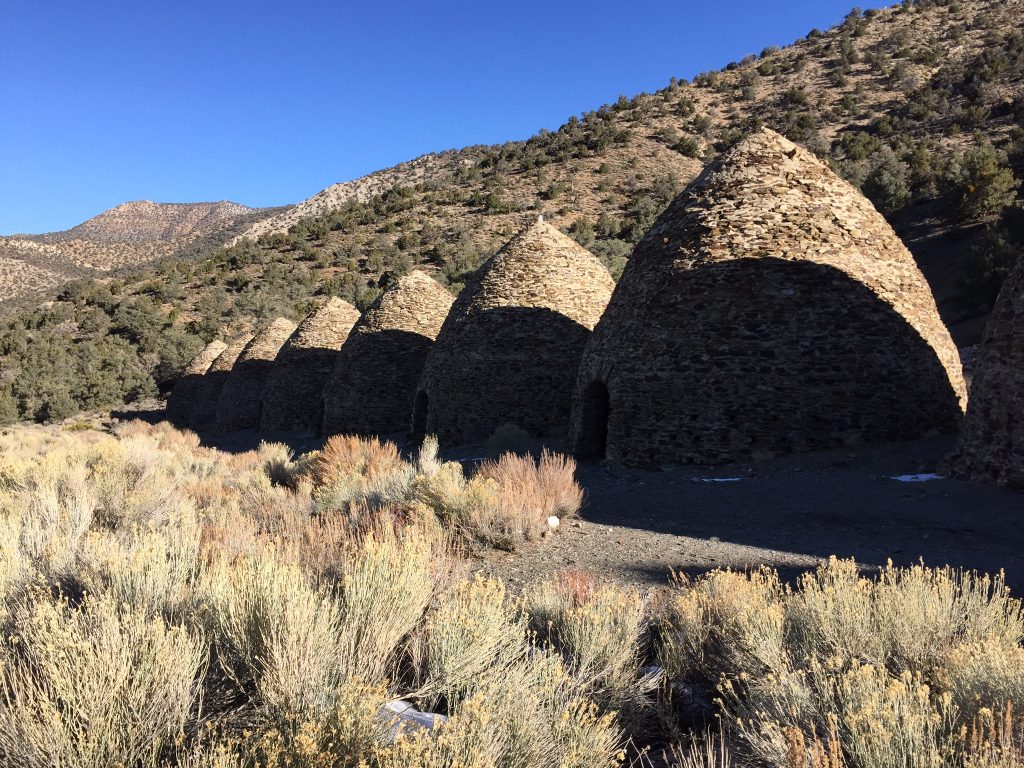 The charcoal kilns mark the start of the Wildrose Peak trail. 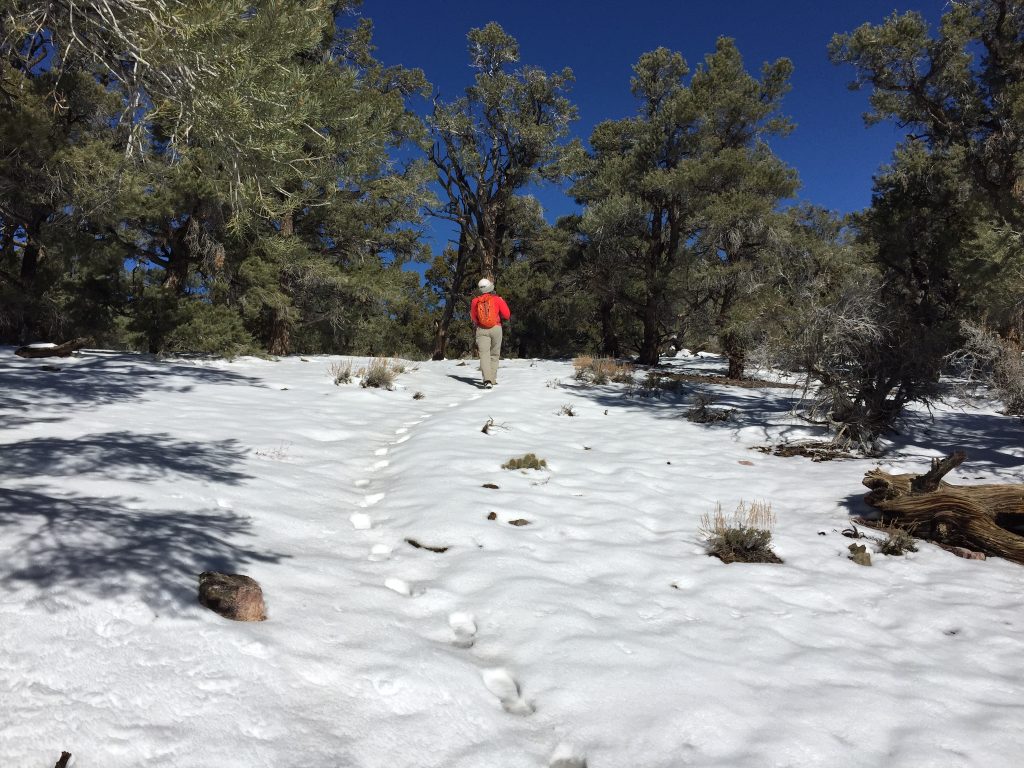 The snow was never more than a foot deep. 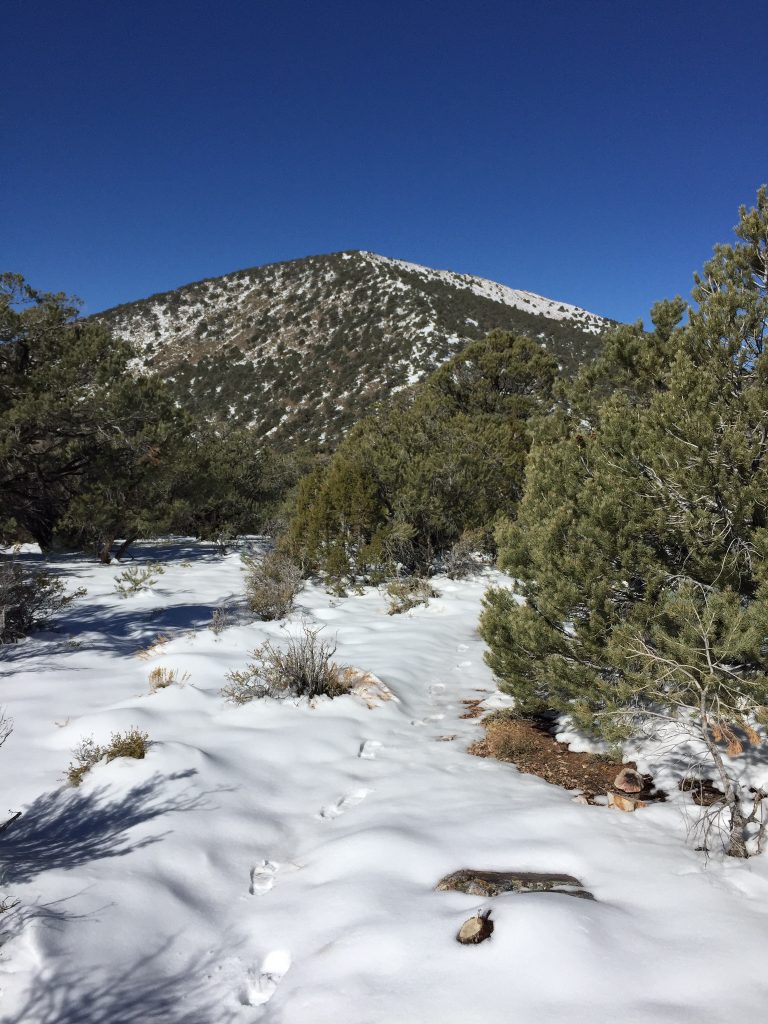 Our first view of the top. 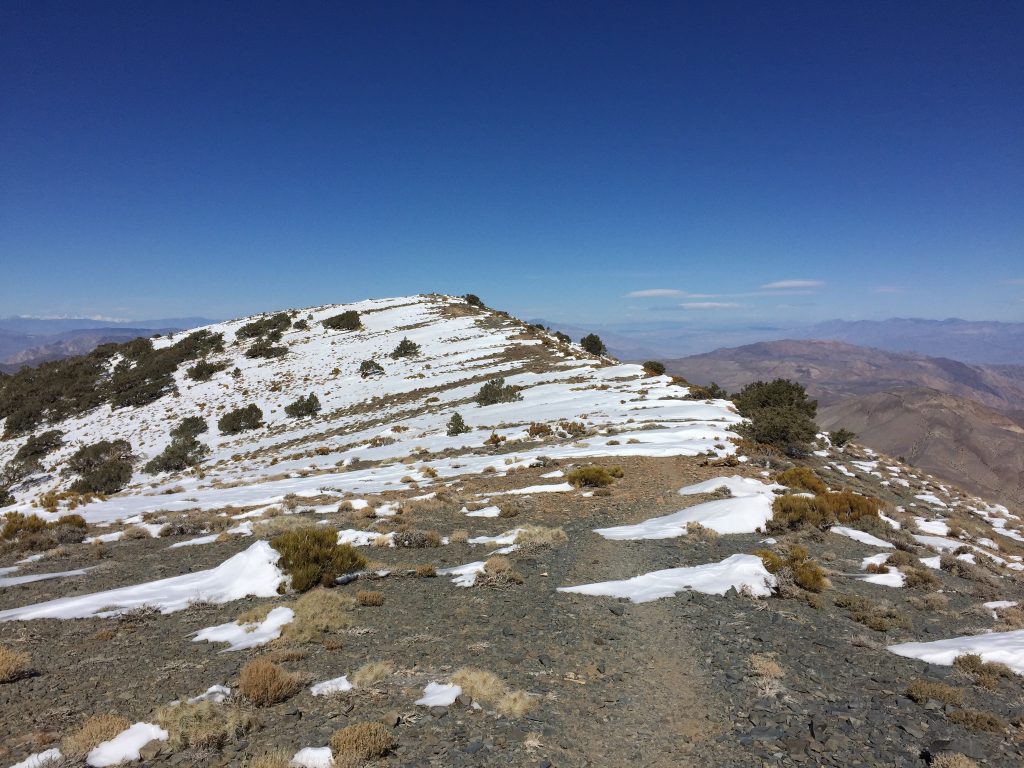 The final steps to the top. 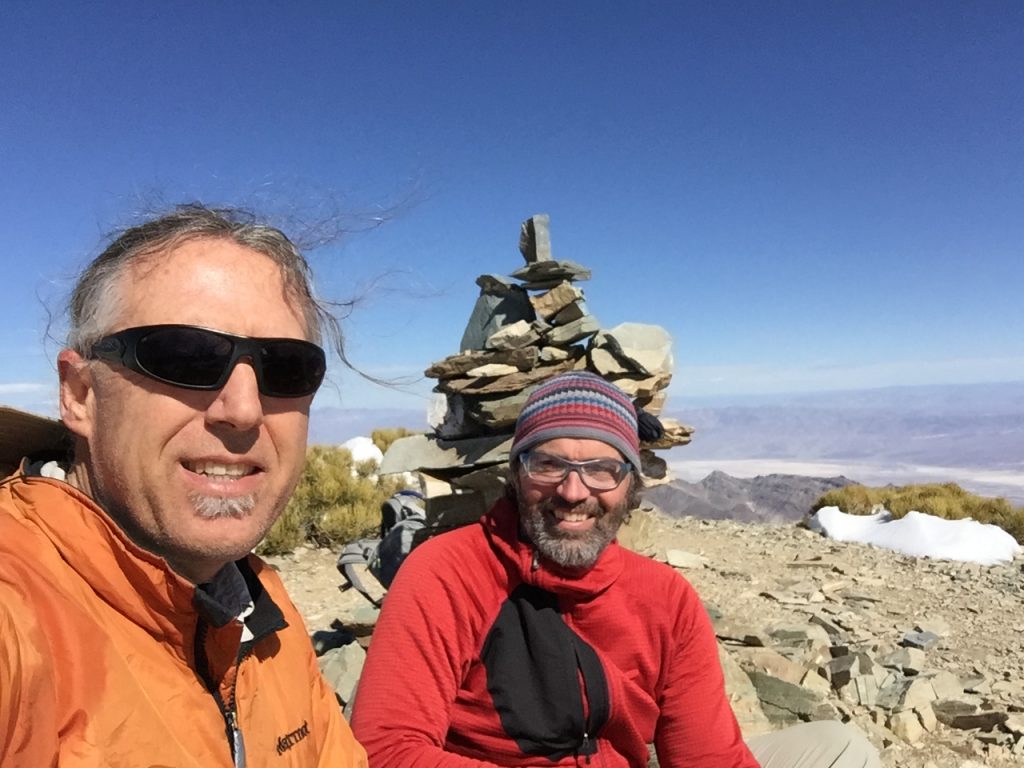 This sure beat working.

We tried to get a room at the Furnace Creek Resort but they wanted an unbelievable $340 so we drove back to Beatty and the ever reliable Exchange Club Motel. Dinner again at the Sourdough Saloon where had decent pizza and refreshing beer.

On Friday, we drove back to the park after breakfast to climb Corkscrew Peak, 5,084 feet. QThis peak is a stunner and dominates the view north of Furnace Creek. It looks a bit like a corkscrew. When I saw this peak the prior November, I knew I had to climb it.

This climb was eight miles round trip with 3,200 feet of gain. The first two miles were mostly flat as we wandered through the brush. We entered a narrow gully near the base of the peak and kept our eyes open for a climber’s trail that left the gully to reach the ridge above. Once we found our turn it was a short, steep climb to the ridge. The ridge was moderate at first and then steepened considerably. We hiked by an arch along the way and soon there after, the ridge moderated and we reached the summit. We were back to the car around 1:00 pm, changed and started the long drive home. 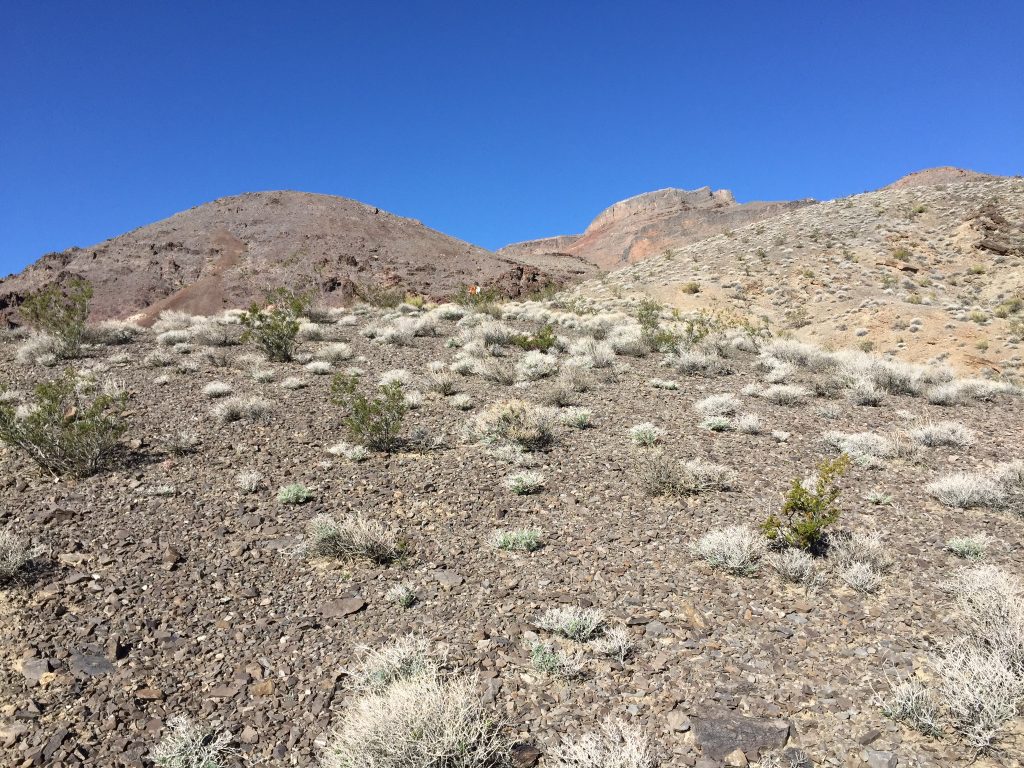 Walking across the flats. 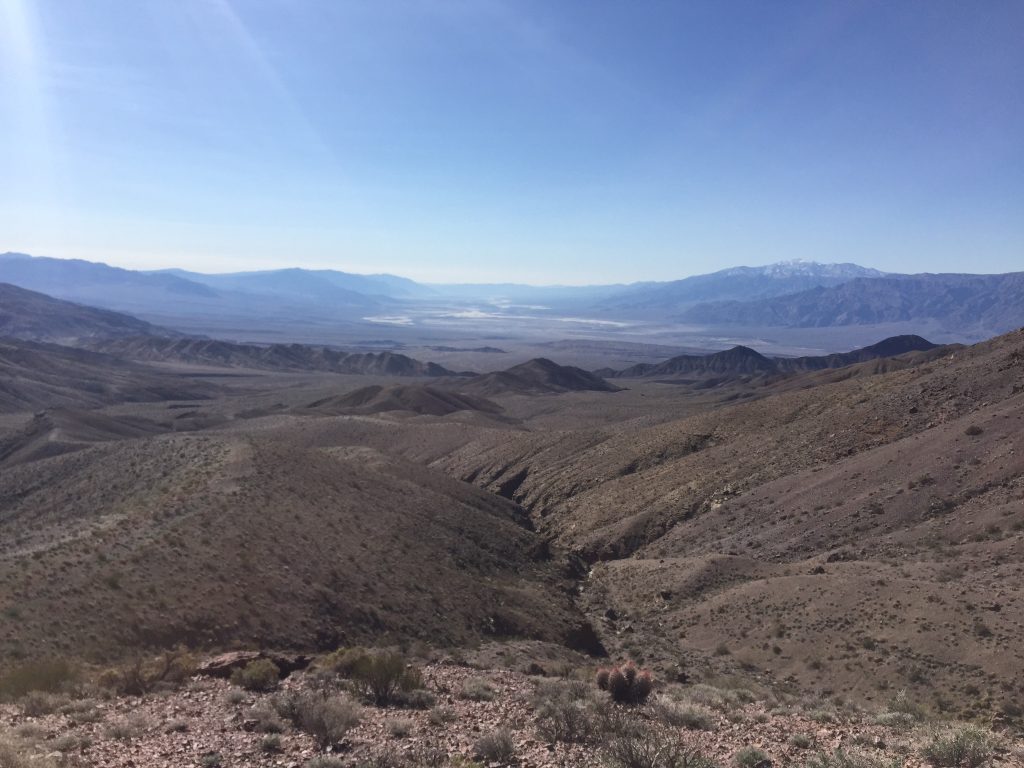 Looking back from the start of the ridge to our starting point. 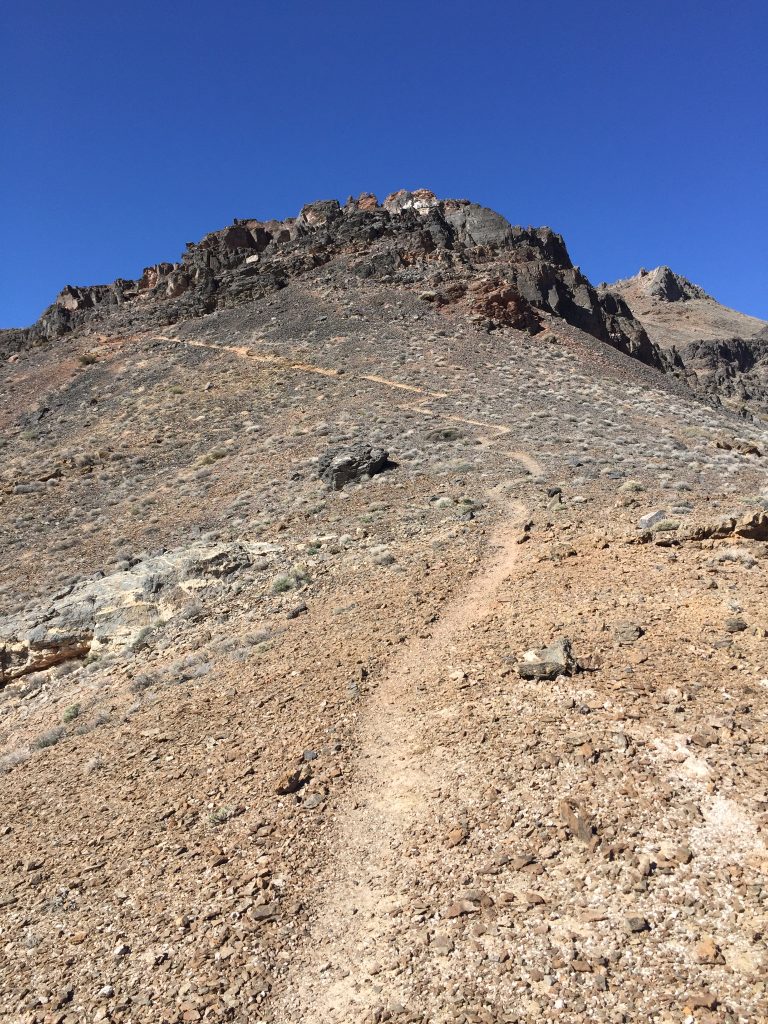 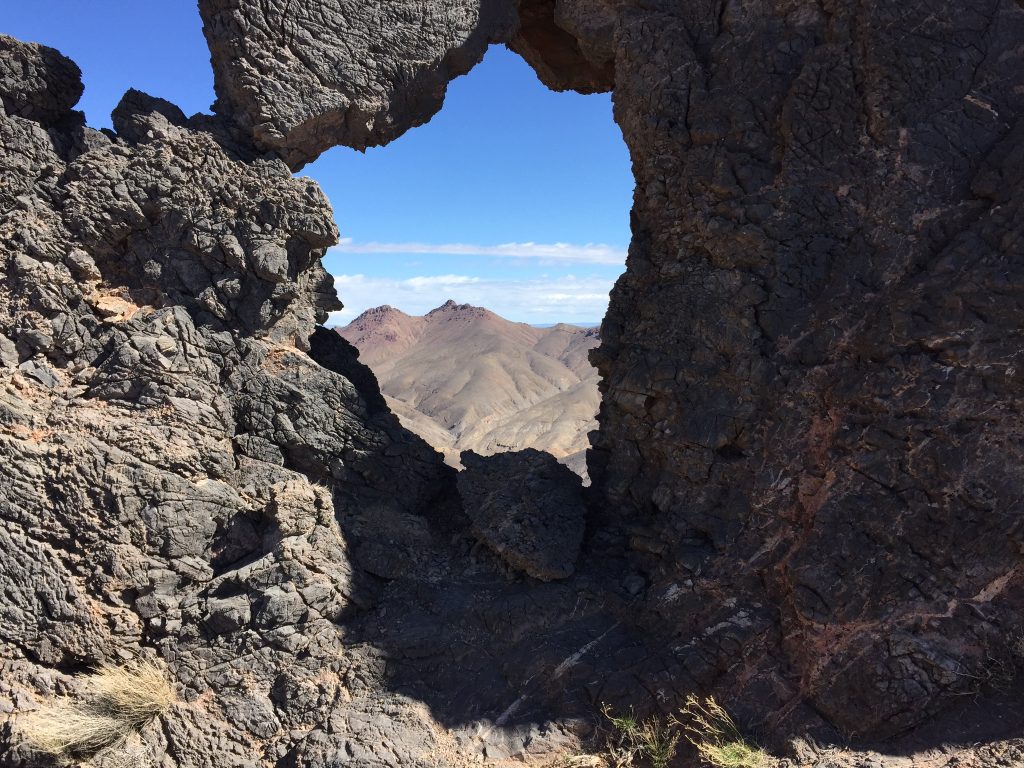 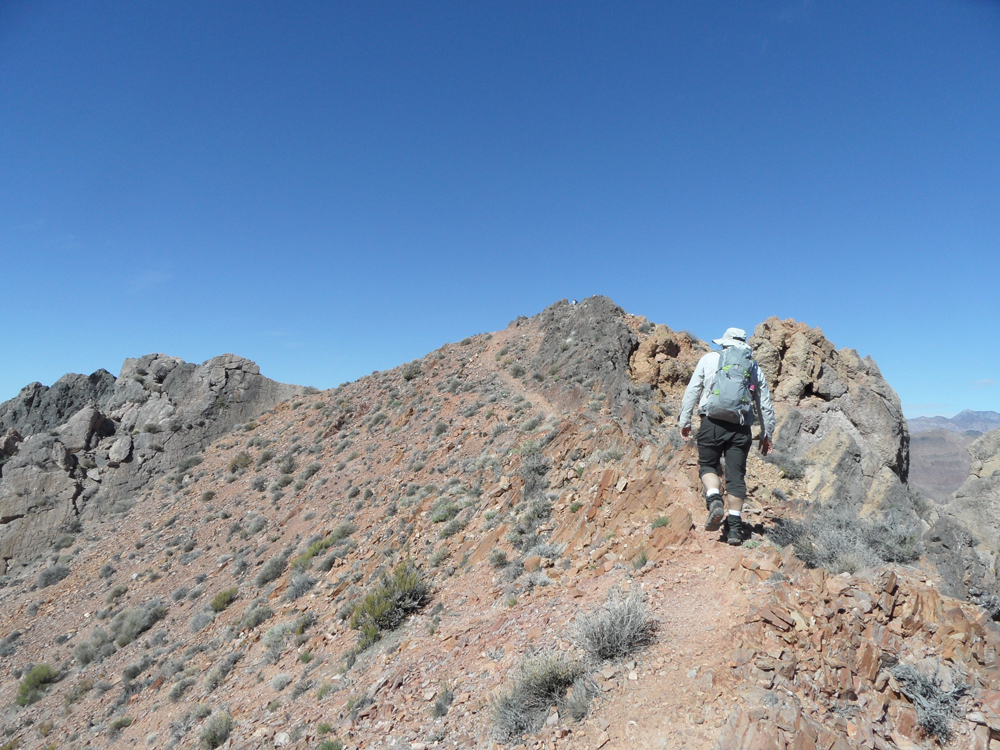 Arriving at the summit.