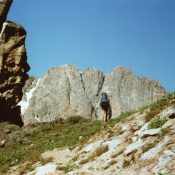 The range’s metamorphic rock has been carved in many imposing formations.

Over a long Fourth of July weekend in 1996 I hiked the Ruby Crest Trail from Lamoille Canyon to the Overland Lake Trailhead, a distance, with side trips, of roughly 30 miles with Dana Hansen, Basil Service and Becky Probst. We parked one vehicle at the southern trailhead, spent a night in Elko and then drove to the Lamoille Canyon trailhead. From this northern trailhead the Ruby Crest Trail runs south for 43 miles to Harrison Pass. The trail crosses the most remarkable section of the very scenic Ruby Mountains. It also provides great access to many mountain lakes and high peaks.

The Ruby Mountains are perhaps the wettest range in the Great Basin both in terms of precipitation and the number of lakes found in the range. The range is composed of mostly metamorphic rock including a lot of metamorphosed granite. While not as solid as granite, the rock’s similarity to granite gives the range an almost Sierra Nevada quality. The eastern escarpment is steep and dry. The western side rise gradually and is much wetter. Ruby Dome, the range’s highest summit, is located west of the Ruby crest.

Lamoille Canyon is a scenic U-shaped glacial valley which sees a lot of visitors during the summer. The valley is surrounded by ten and eleven thousand foot peaks. The canyon is reached by paved roads from Elko. The trailhead ends where the road ends in a loop. 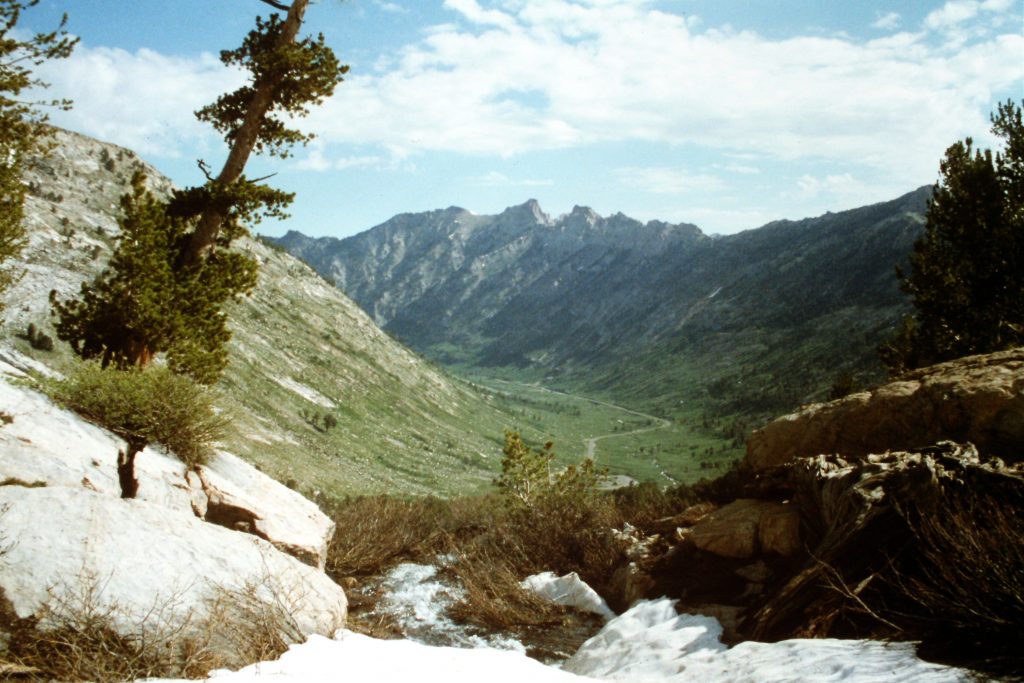 Looking back to Lamoille Canyon. 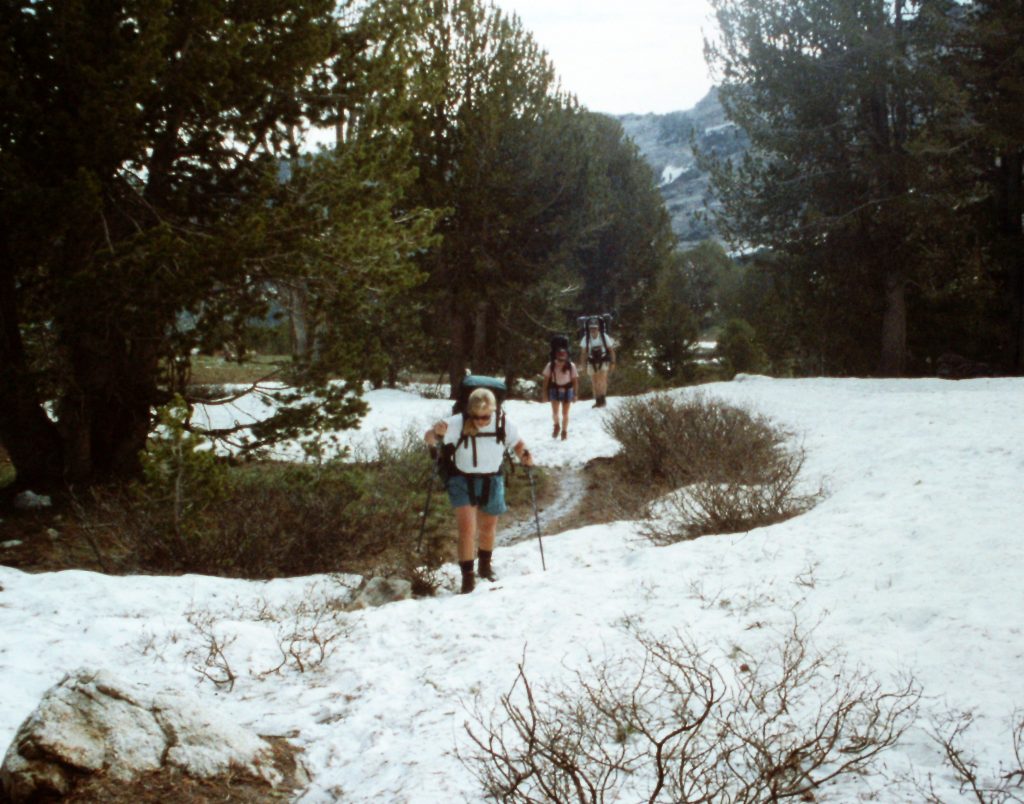 There was still a lot of snow in the trees on northern slopes but the temperature was warm and we had no problem following the trail. 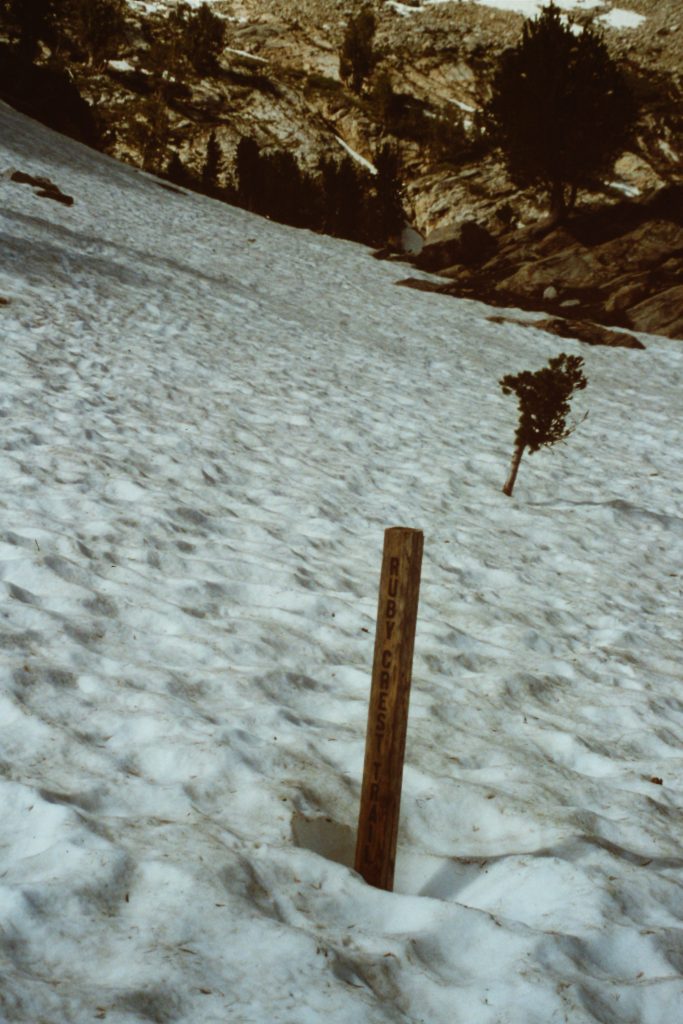 The first seven miles of the crest trail is as popular as the road through the canyon but once you get past the second pass you probably will not see anyone. The trail climbs past the Dollar Lakes and Lamoille Lake to Liberty Pass in — miles. Liberty Peak is on the west side of the pass and Tri-Lake Peak is on the east side. 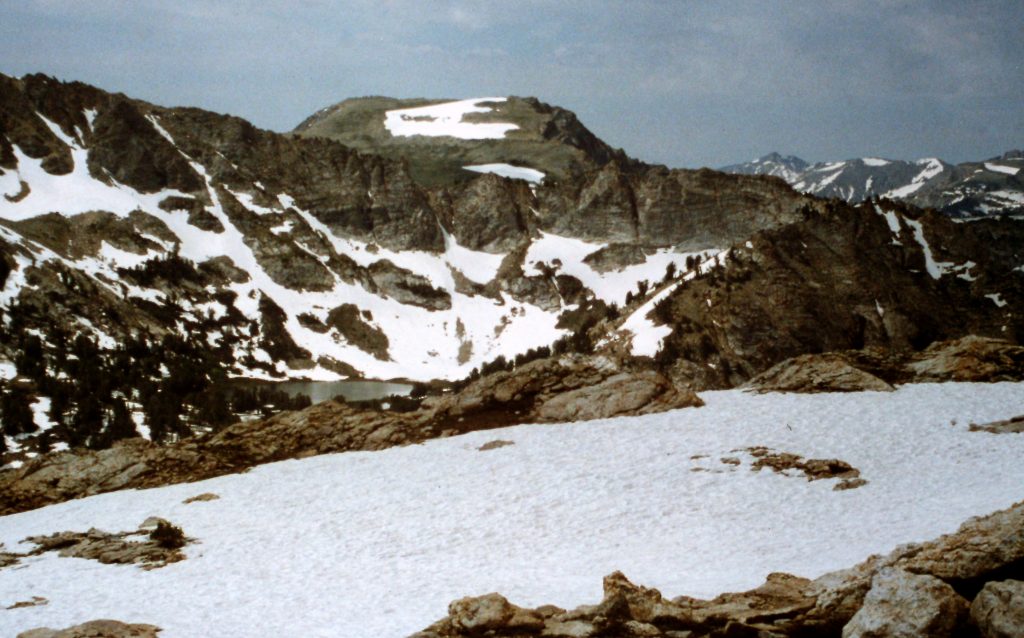 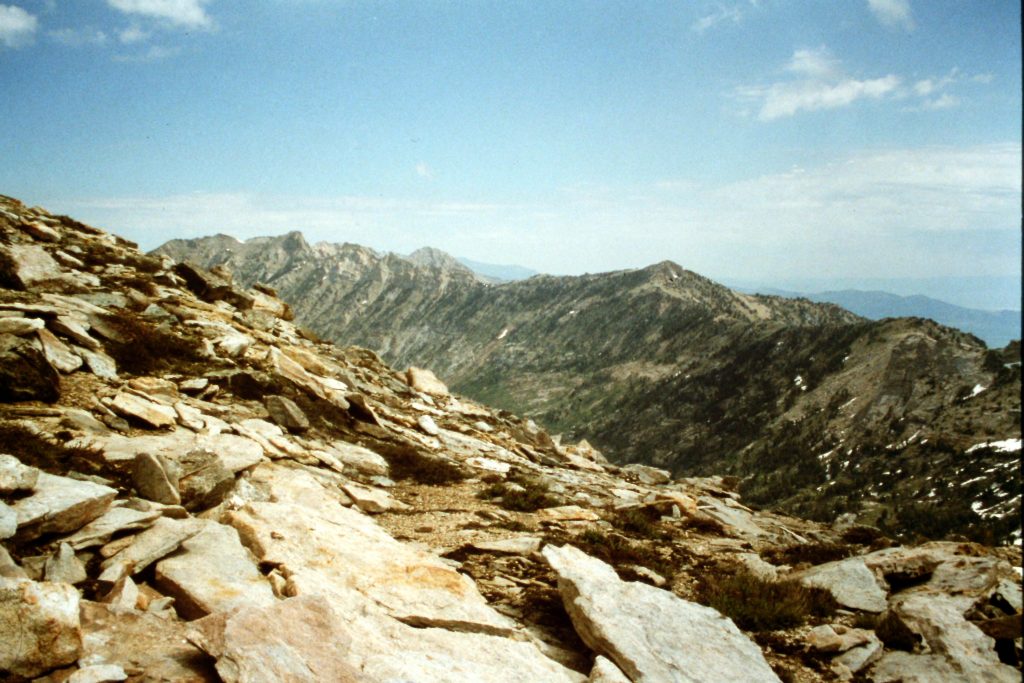 Looking toward Lamoille Canyon from the slopes of Liberty Peak. 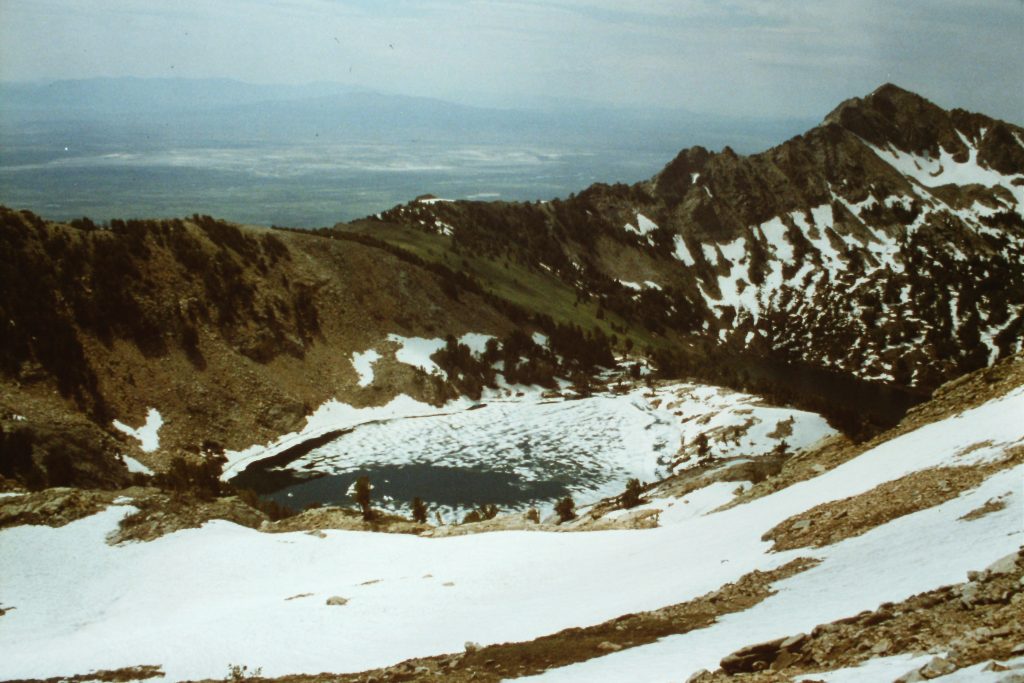 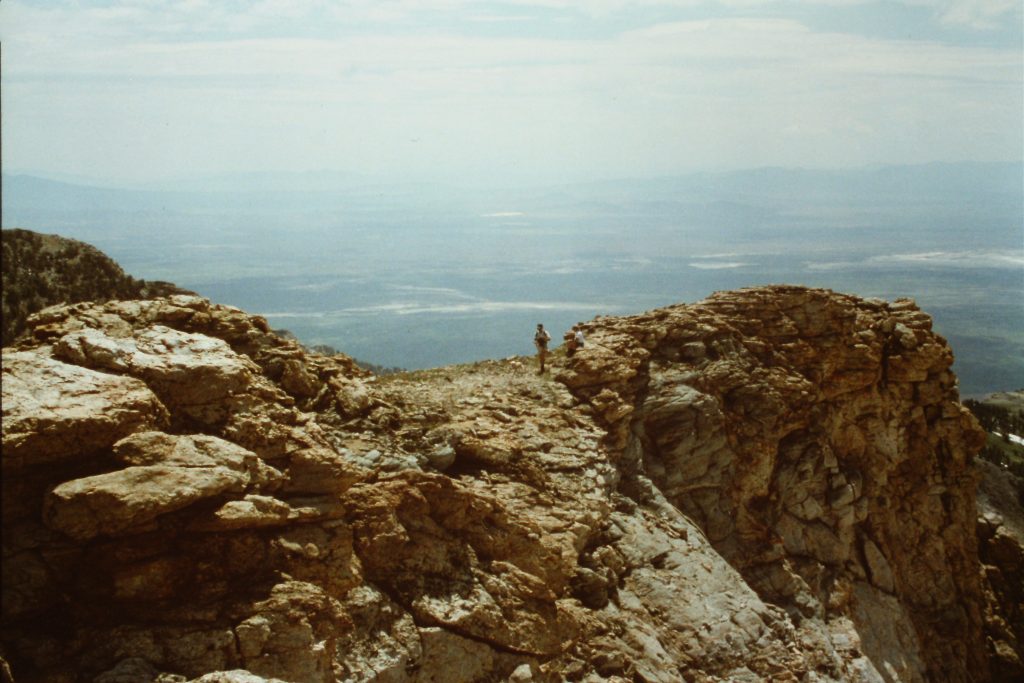 The ridge leading to Liberty Peak. 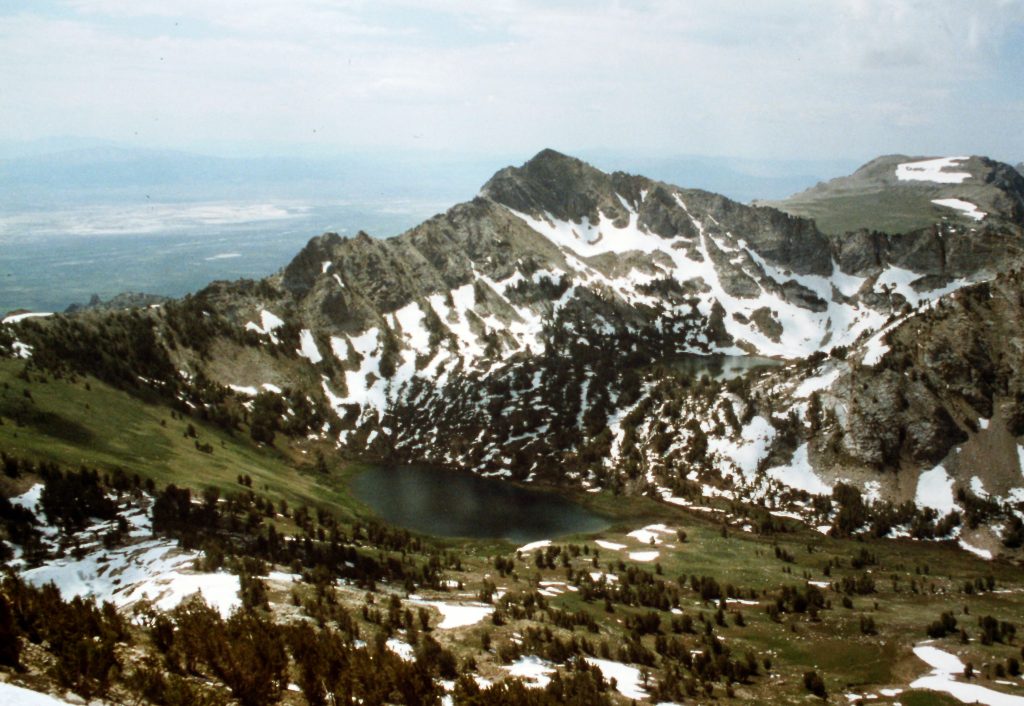 Lake Peak and the headwaters of Kleckner Creek. 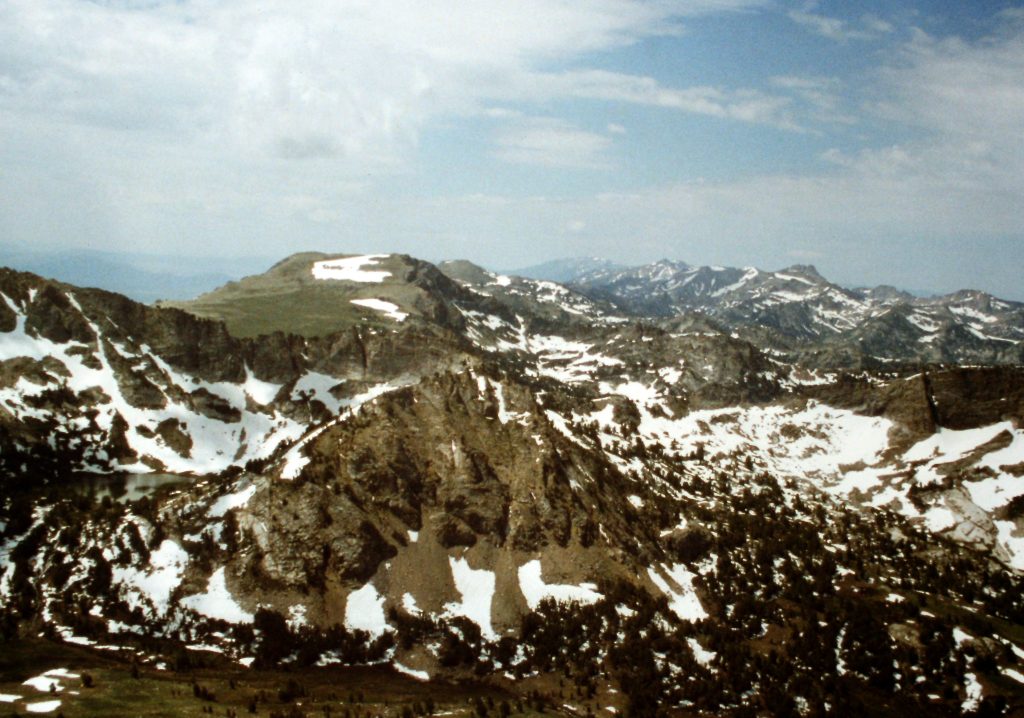 Wines Peak in the distance. 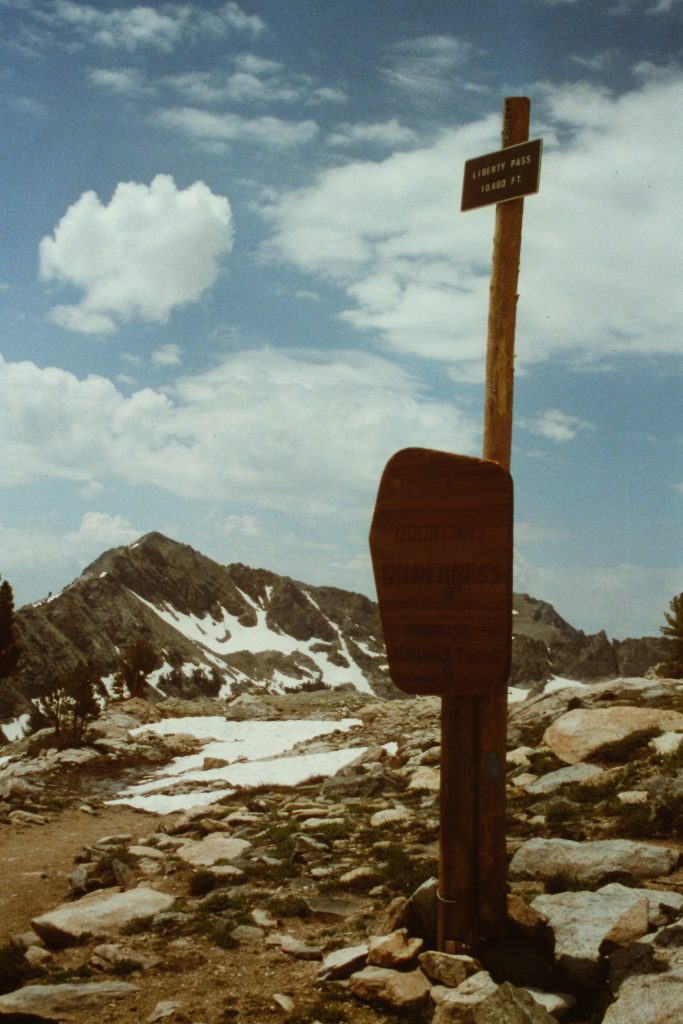 Liberty Pass with Lake Peak in the distance.

South of Liberty Pass is the impressive headwaters of Kleckner Creek which is surrounded by six ten thousand foot peaks and graced by three beautiful lakes. On our first day we climbed over Liberty Pass and climbed Liberty Peak, 11,039 feet and then dropped into Kleckner Creek to set up camp at Farve Lake. After a lunch break we climbed Lake Peak, 10,922 feet which sits on the Ruby crest south of Farve Lake. I estimated that we covered between 7 and 8 miles. 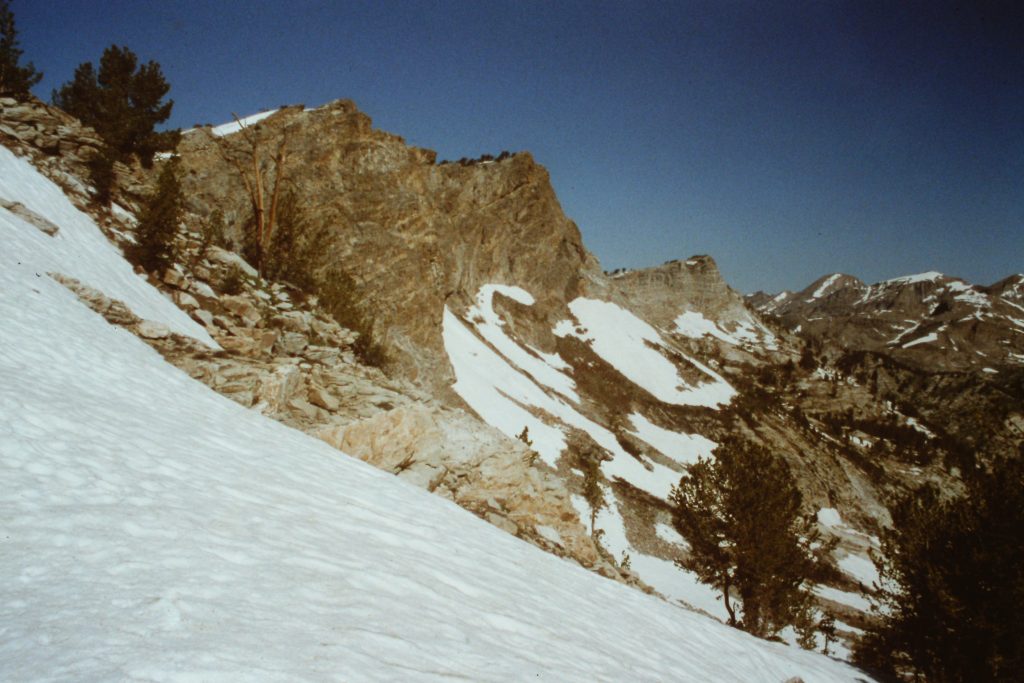 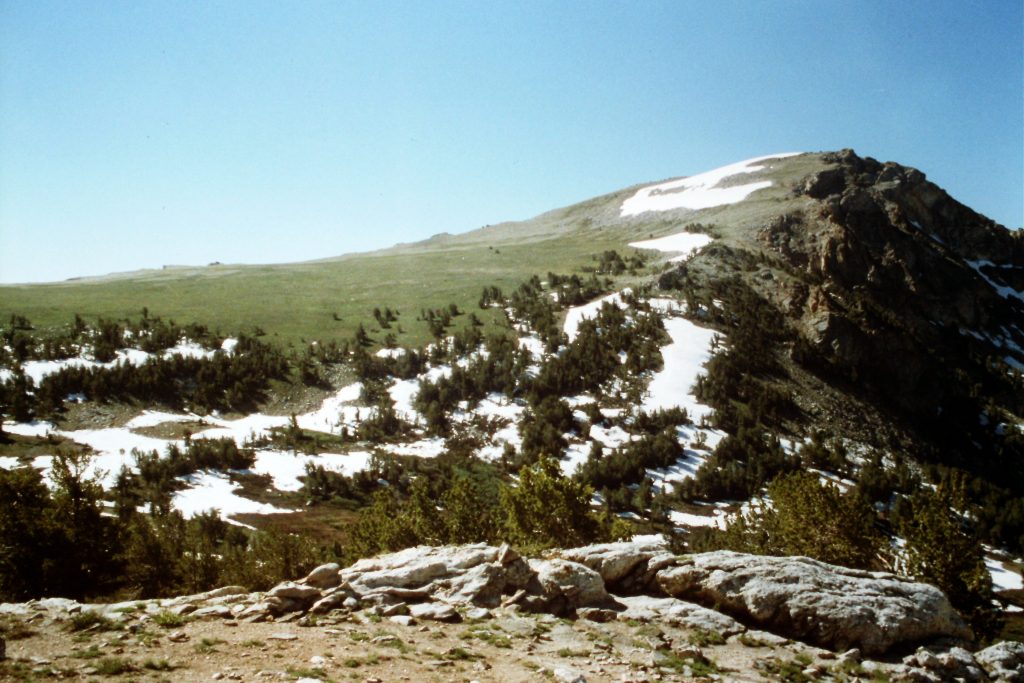 Heading toward the crest. Wines Peak with a few remaining snow fields. 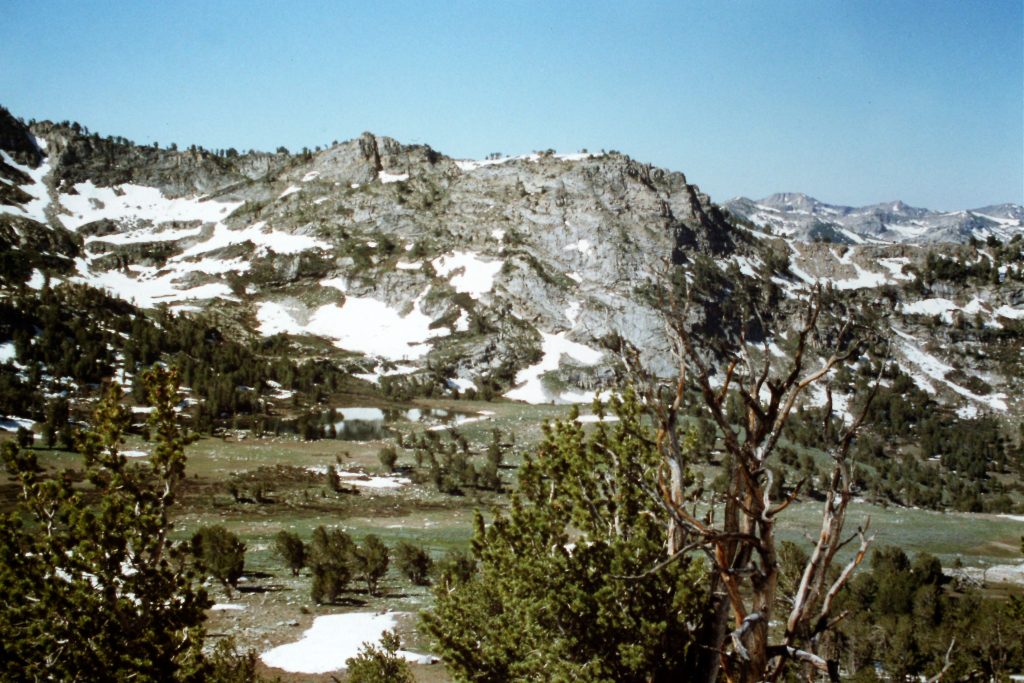 Day Two took us out of the Kleckner Creek drainage over a pass located west of Lake Mountain into the North Furlong drainage. The trail stays high, only losing about 300 feet before climbing up to the crest north of Wines Peak, 10,983 feet. From this point the trail stays on the crest until it crosses over the summit of Peak 10120. Along the way trail crosses over two additional mountains, Peak 10760 and Peak 10756. The actual high point on these peaks are all located just off the trail but are easily reached. After walking nine miles we set up camp on the north side of Peak 10207. A large melting snow drift provided us with water and allowed us to camp at 9,800 feet just west of the trail. The trail across this section is as scenic as any spot you can imagine. The walking was on good trail. The vistas were always immense. 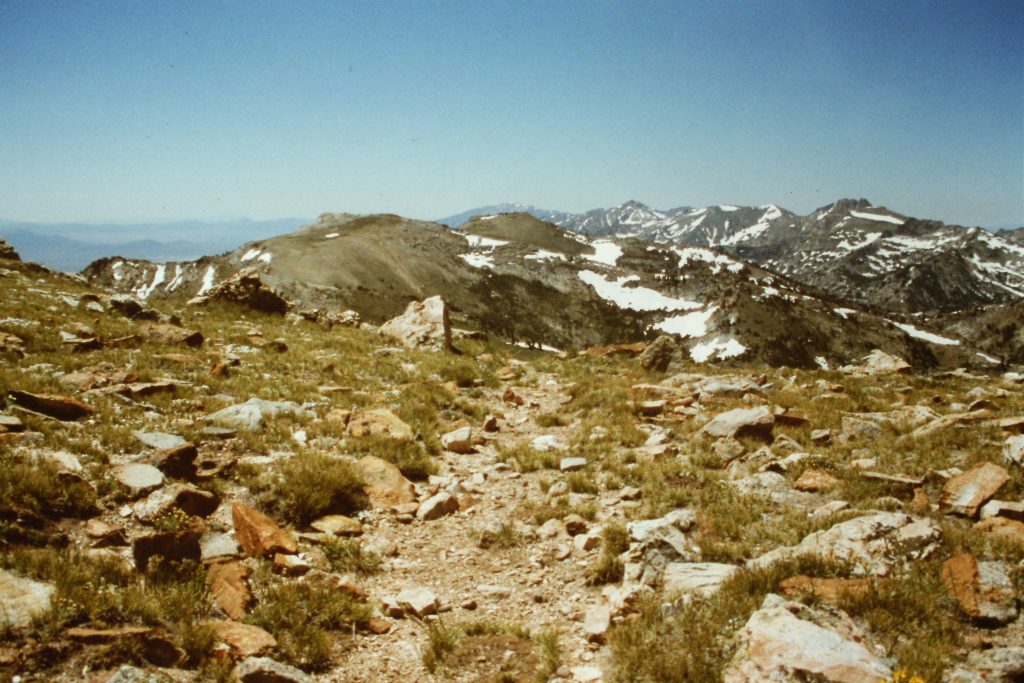 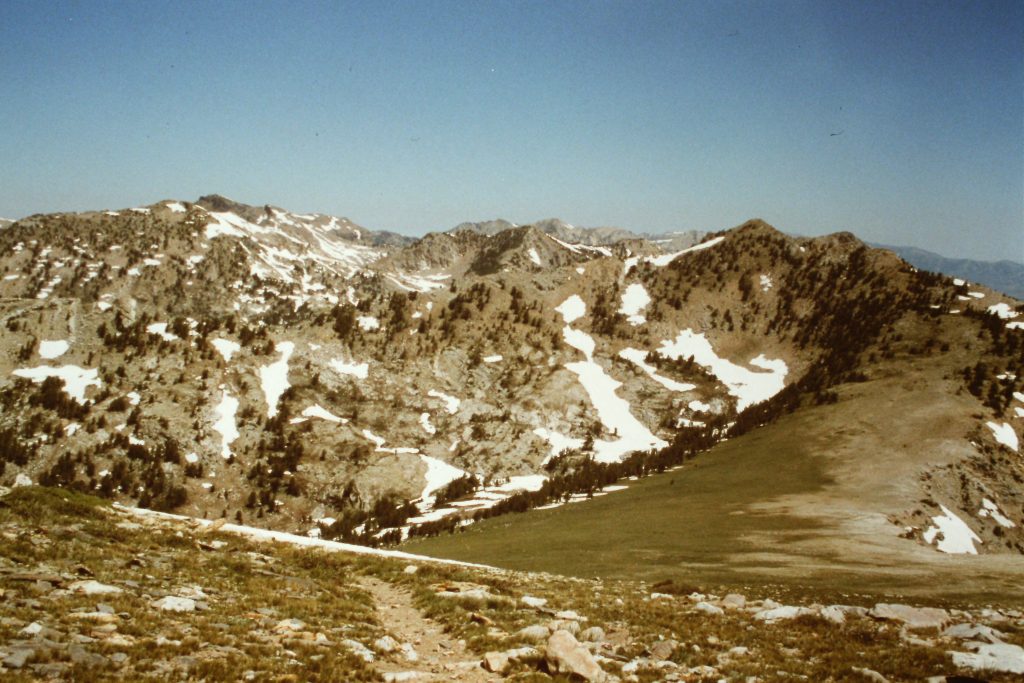 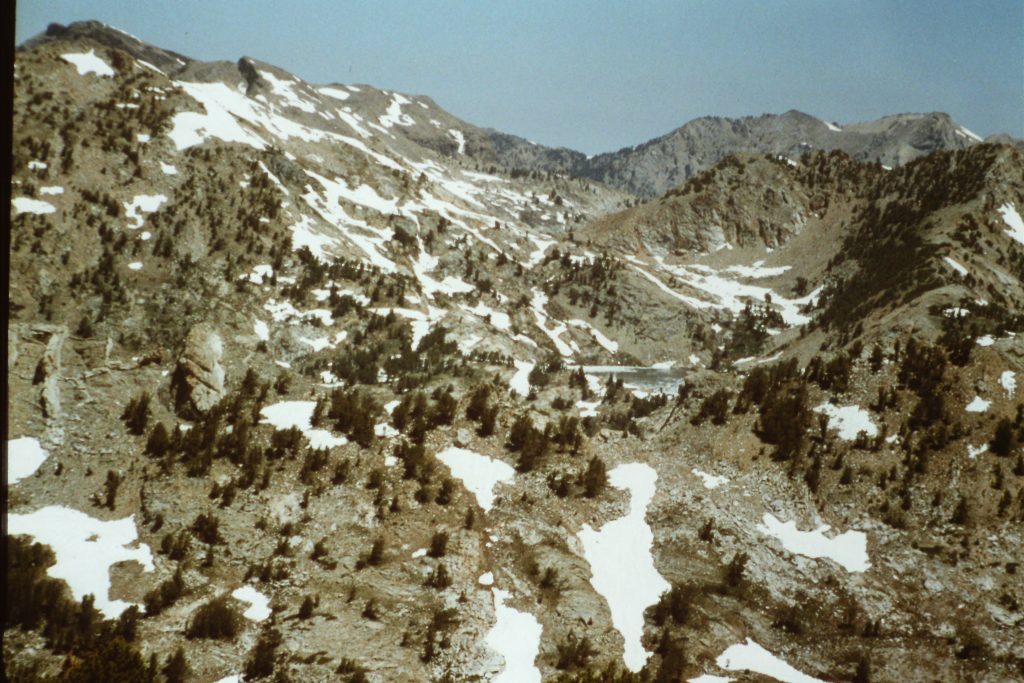 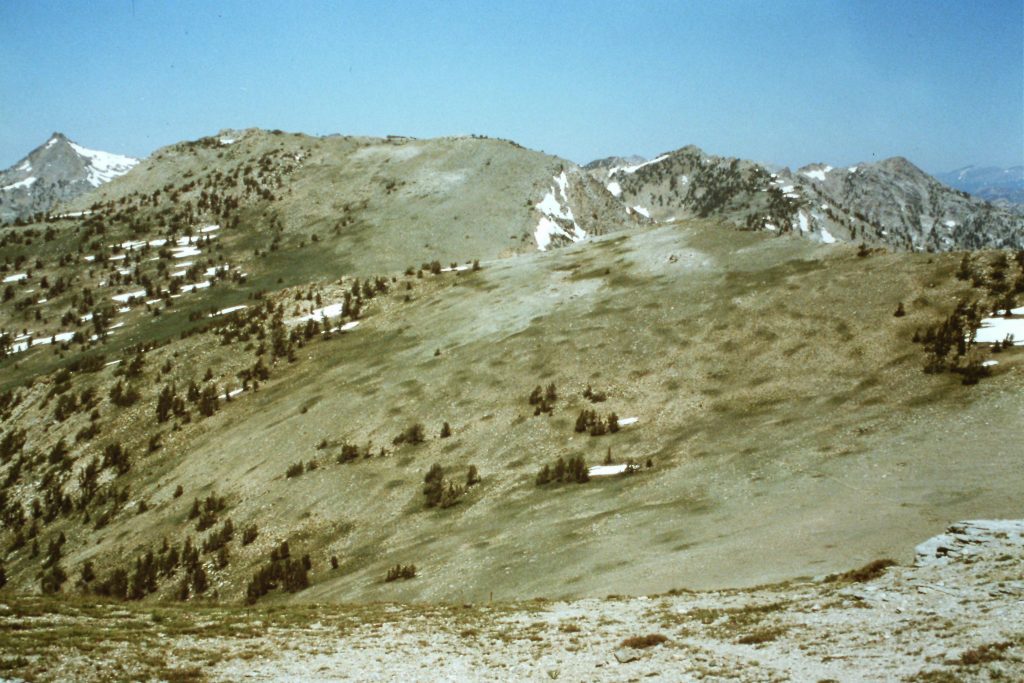 Approaching the next peak. 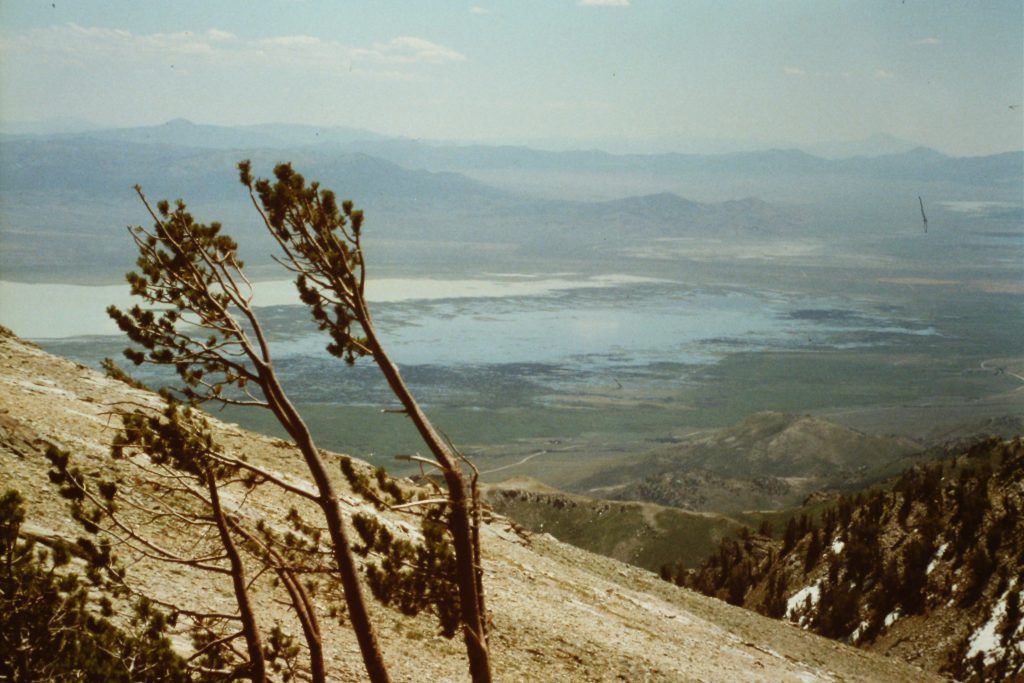 The Ruby Marsh four miles away and four thousand feet below. 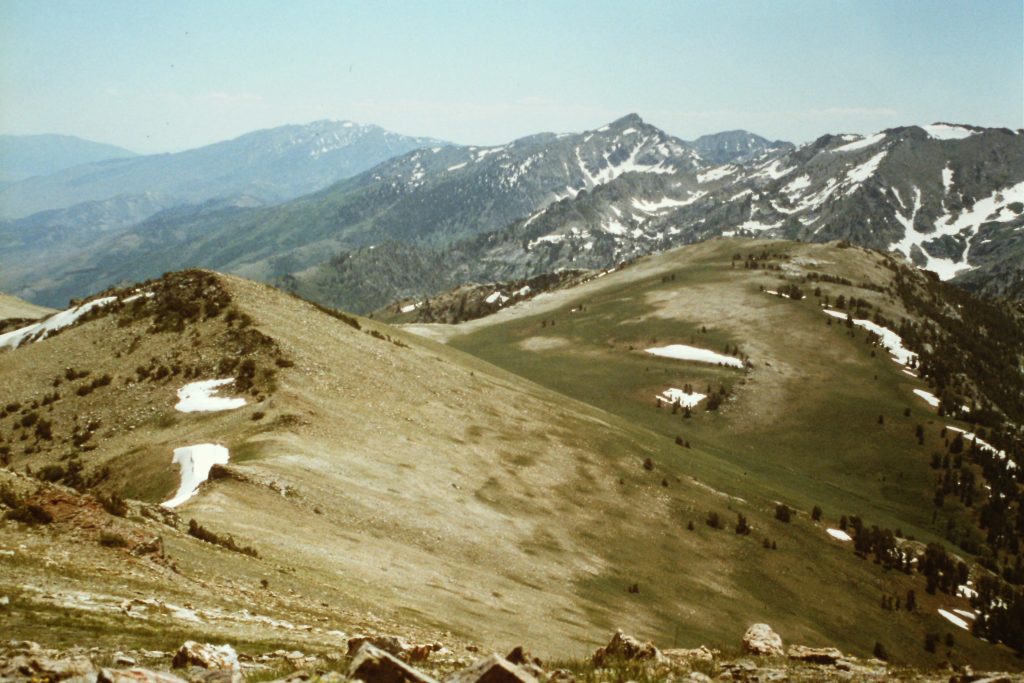 The trail along the crest is all about vistas. 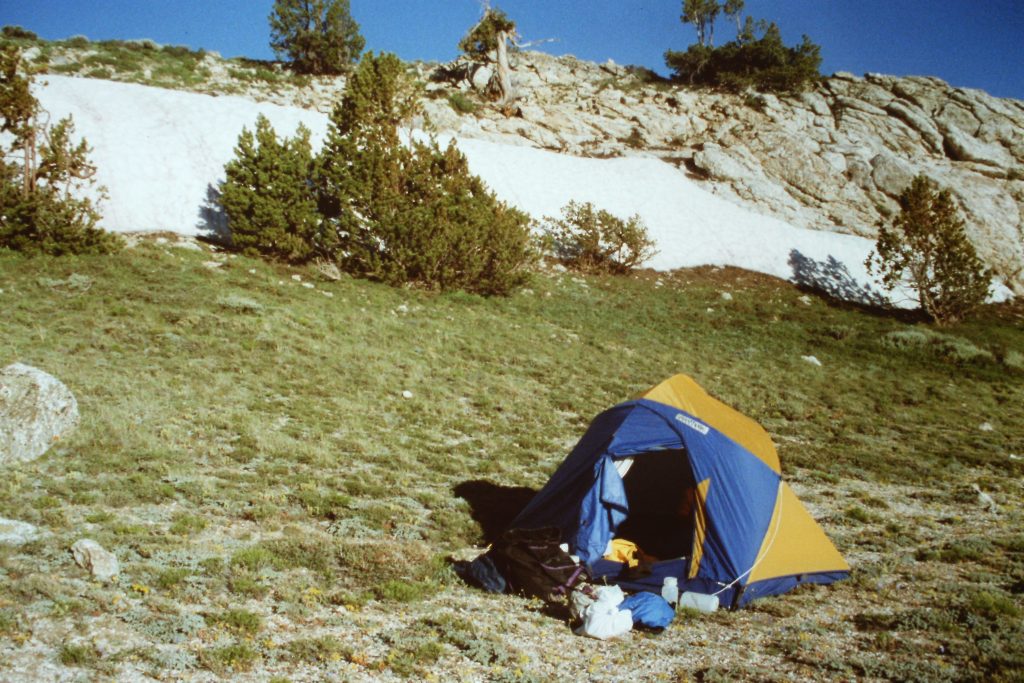 On Day Three we hiked up and over Peak 10207, which was the last peak, and then followed the trail, which soon leaves the crest to drop down to Overland Lake in a distance of six miles. Along this section the trail looses 1,600 feet and then gains 850 feet before reaching the lake at 9,453 feet. Overland Lake is a scenic but rocky spot with only a few campsites. 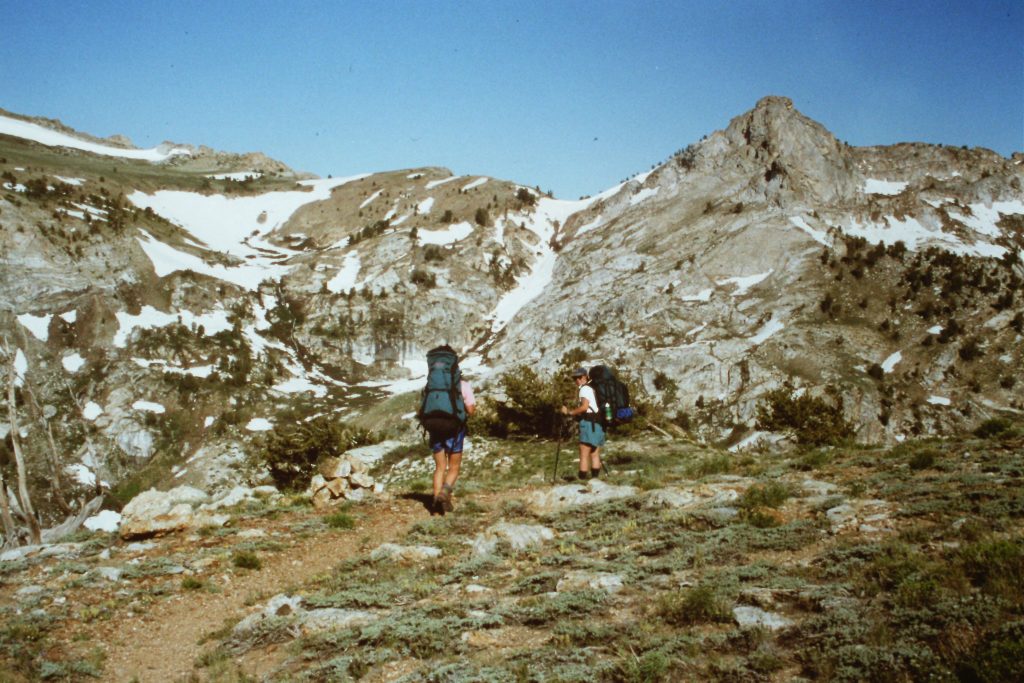 Dropping down Peak 10207 on our way to Overland Lake. 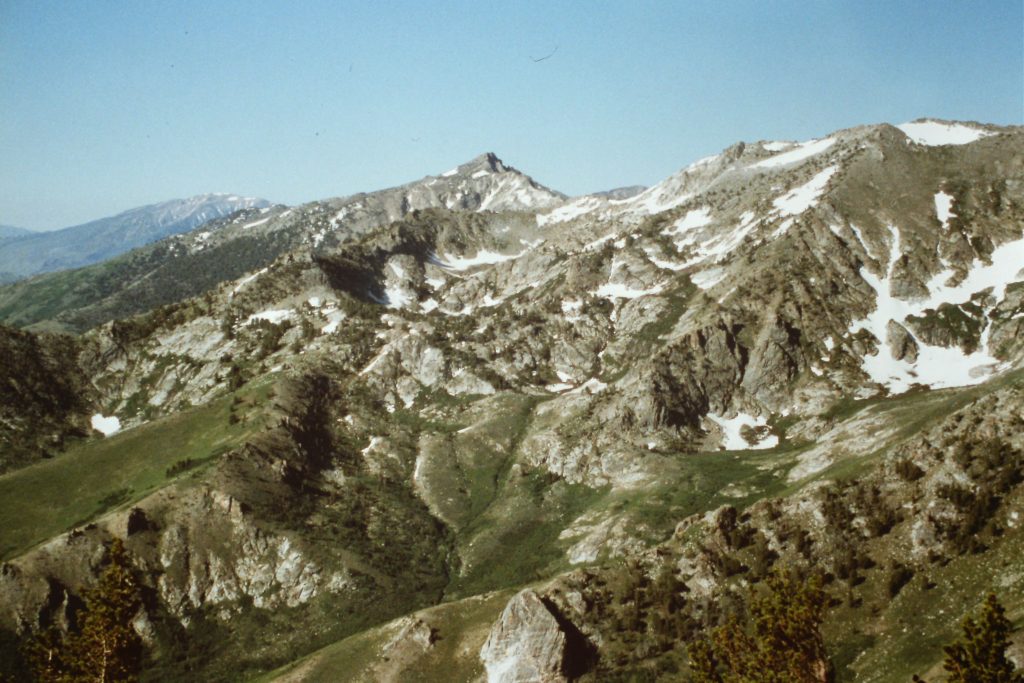 Overland Lake is out there in the distance.

Our final day took us from Overland Lake to Overland Lake Trailhead in eight miles. This section of the trail was all about descending as the trail loses 3,250 feet to reach the 6,200 foot trailhead. In many ways this section of trail was the most impressive part of the trip, taking us down the range’s steep eastern escarpment to the high desert valley below. We hiked eight miles between the lake and the trailhead. 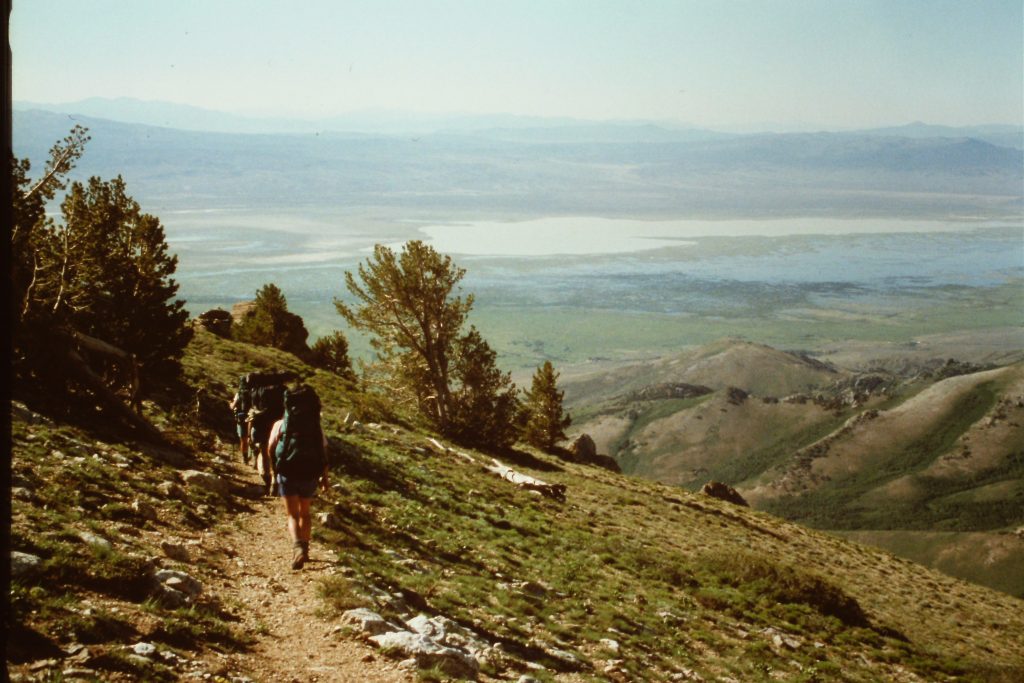 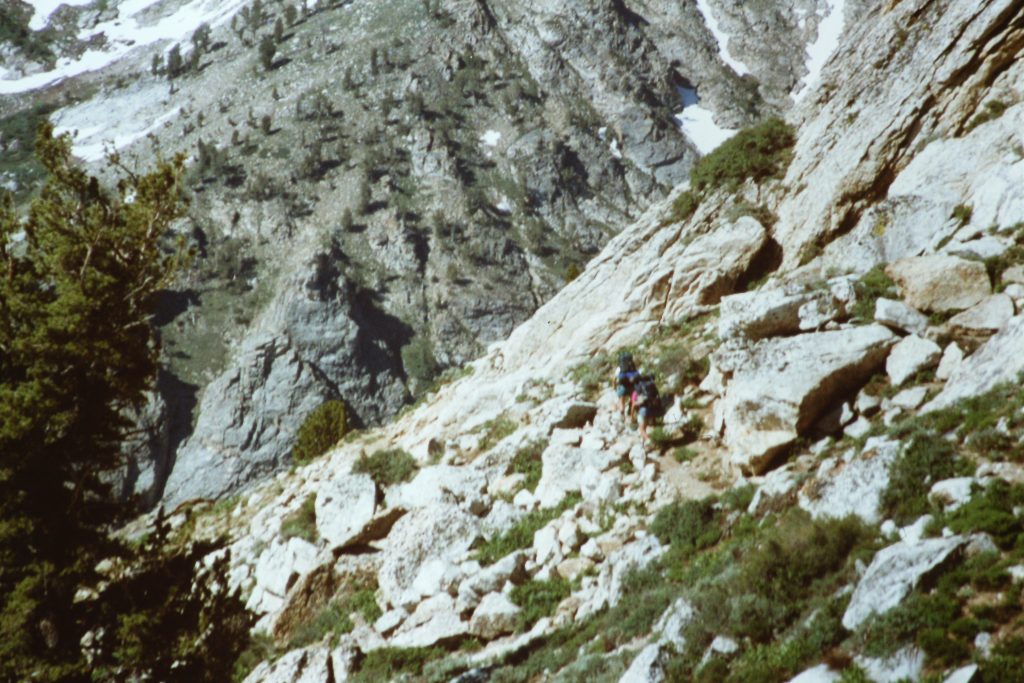 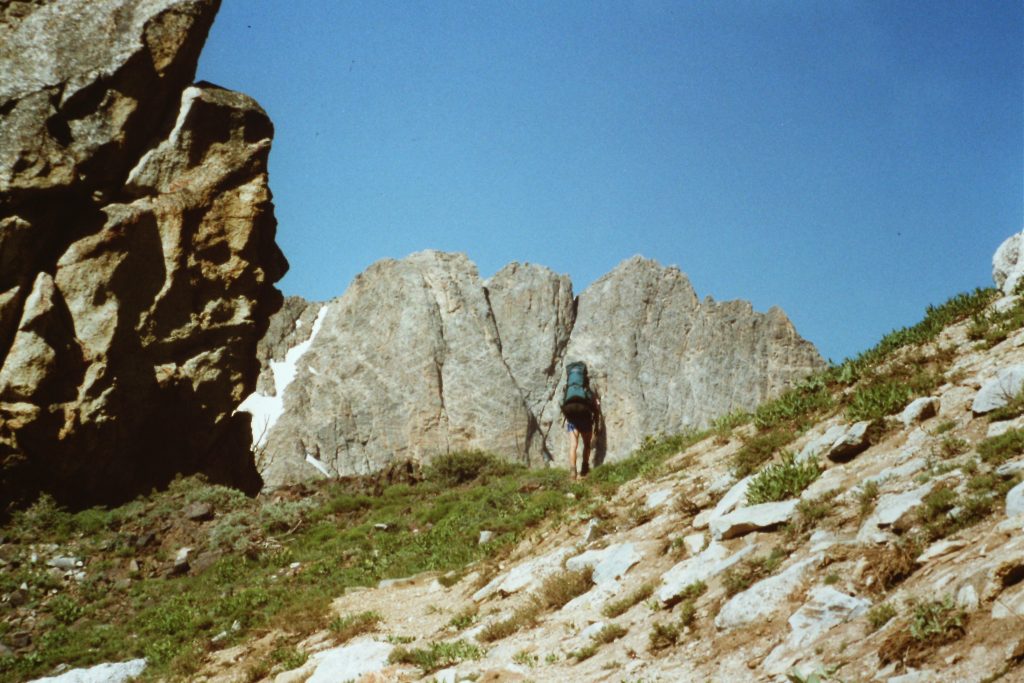 The range’s metamorphic rock has been carved in many imposing formations. 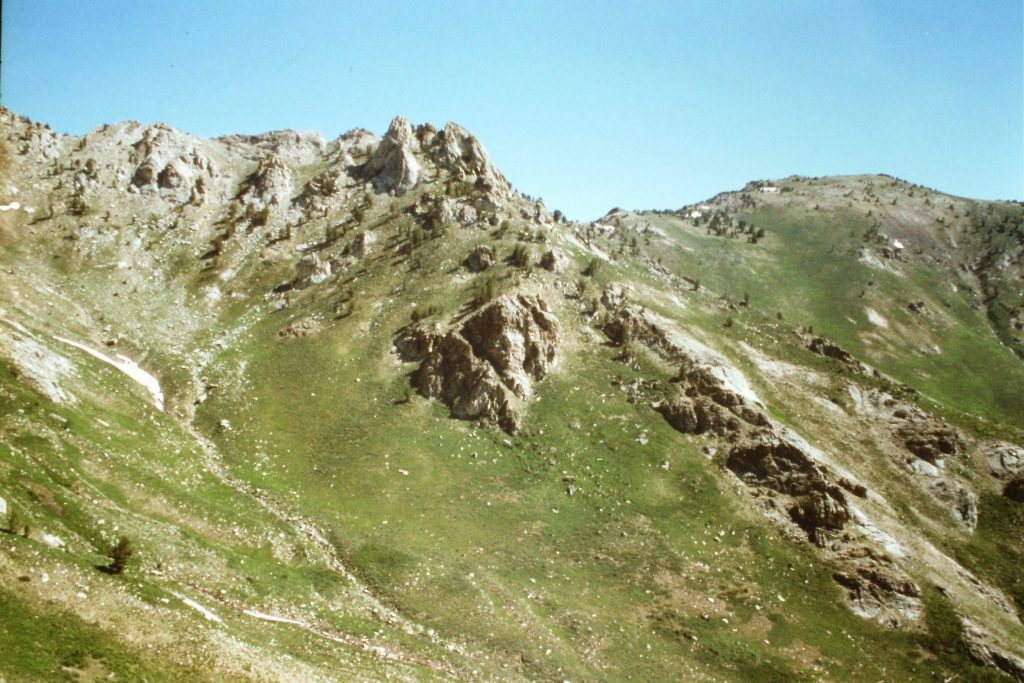 Looking back toward the crest,during our descent. 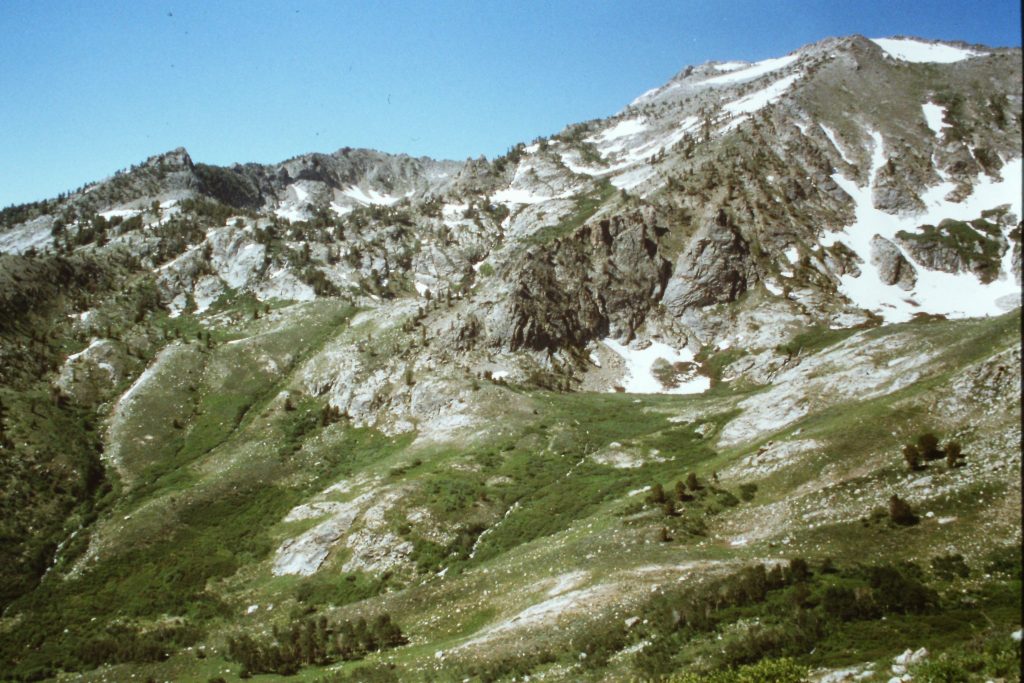 The trail down is a quad killer. 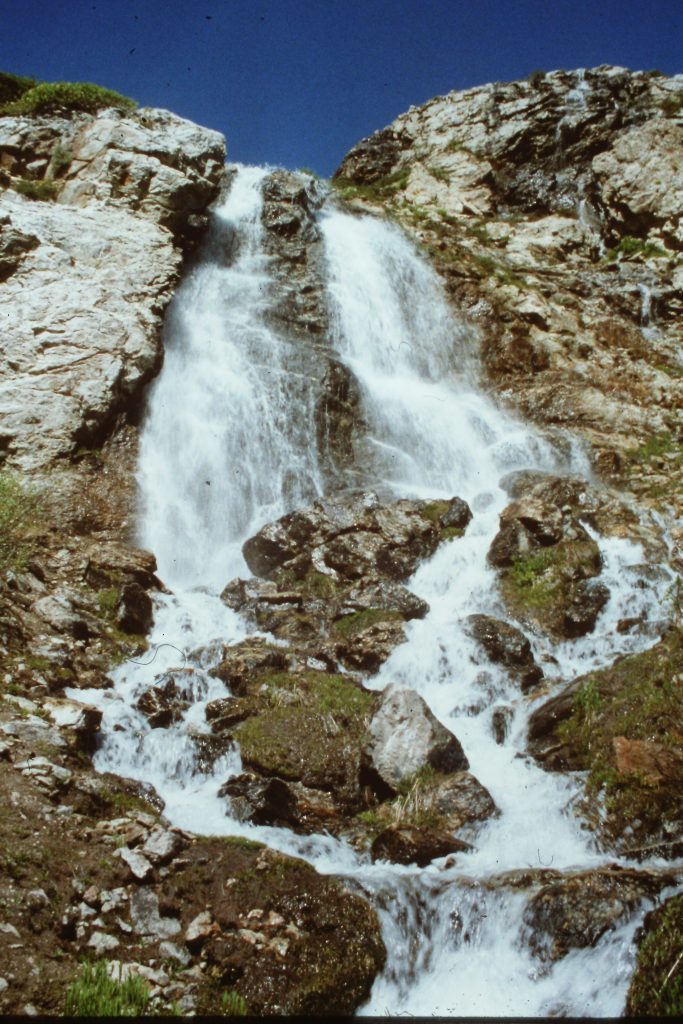 There was water everywhere in early July.

The Ruby Crest trail continues south from Overland Lake and passes near a handful of ten thousand foot peaks. This southern section appears to cross a lot of scenic country but the trail stays well below the crest as it passes through the range on it’s way to the southern trailhead just north of Harrison Pass twenty miles south of Overland Lake.

[Click here for an INDEX TO ARTICLES I’ve published or written about places and adventures I’ve had.]