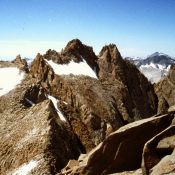 The North Palisade from Mount Sill.

The North Palisade is a 14,242 foot summit located on the Sierra Nevada Crest west of Big Pine California. It sits at the center of an impressive group of Sierra peaks including Temple Crag, Clyde Peak, Middle Palisade, Mount Sill and Split Mountain. Visiting this area was high on my list for many years and I finally got there in 1993.

The Sierra Nevada, John Muir’s Ranges of Light, has long owned my heart. The range is so beautiful that it is a magnet for mountain lovers which means it is too popular and often crowded. Still if you know where to go you can have spectacular terrain all to yourself.

Given the crowded nature of the Sierra Nevada I usually plan my trips to the range for September when the crowds have mostly gone home. I also plan trips to avoid trails as much as possible to further insulate me from crowds of backpackers. This trip was no exception. I planned a loop that started with a trail to Second Lake in the North Fork Big Creek drainage and then would strike out crosscountry crossing five trailless passes and eventually bring us back to Big Creek. Along the way we would cross the Sierra crest twice and stroll through a remote part of Kings Canyon National Park. While the weather is colder on these high peaks in September, it is usually dry and sunny. I was accompanied by Dana Hansen and Gary Quigley on this journey.

On September, 2, 1993 we drove to the trailhead in the North Fork of Big Pine Creek at an elevation of 7,600 and hiked five miles to Second Lake which sits at 10,000 feet. This trail sees a lot of use during the summer but was not crowded this day. Second Lake sits below spectacular Temple Crag. I peak I attempted and failed to climb in 1978. 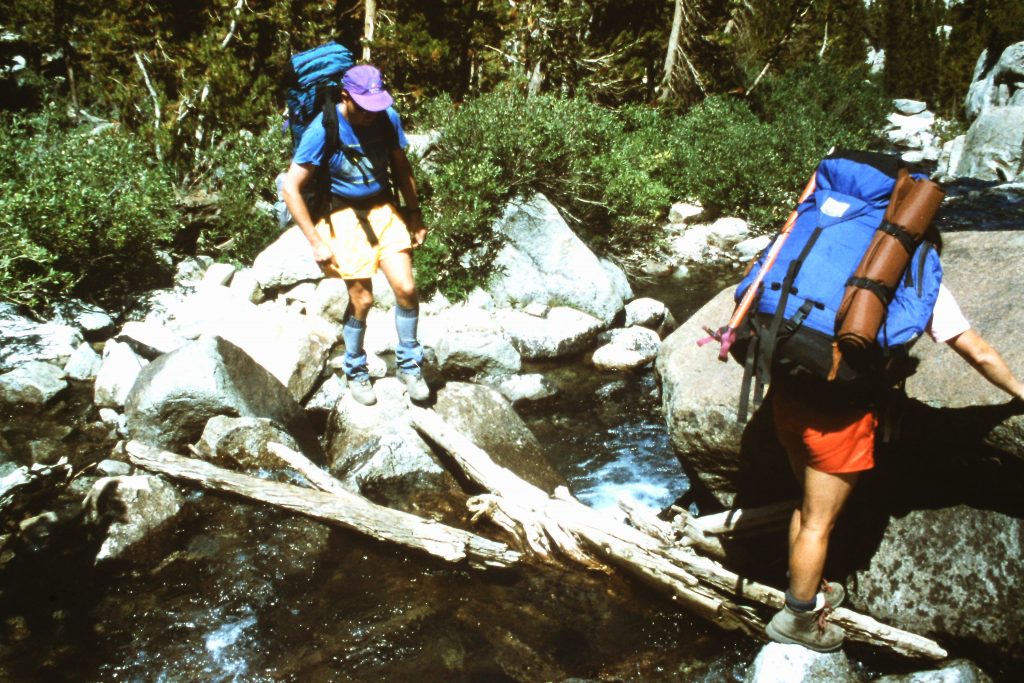 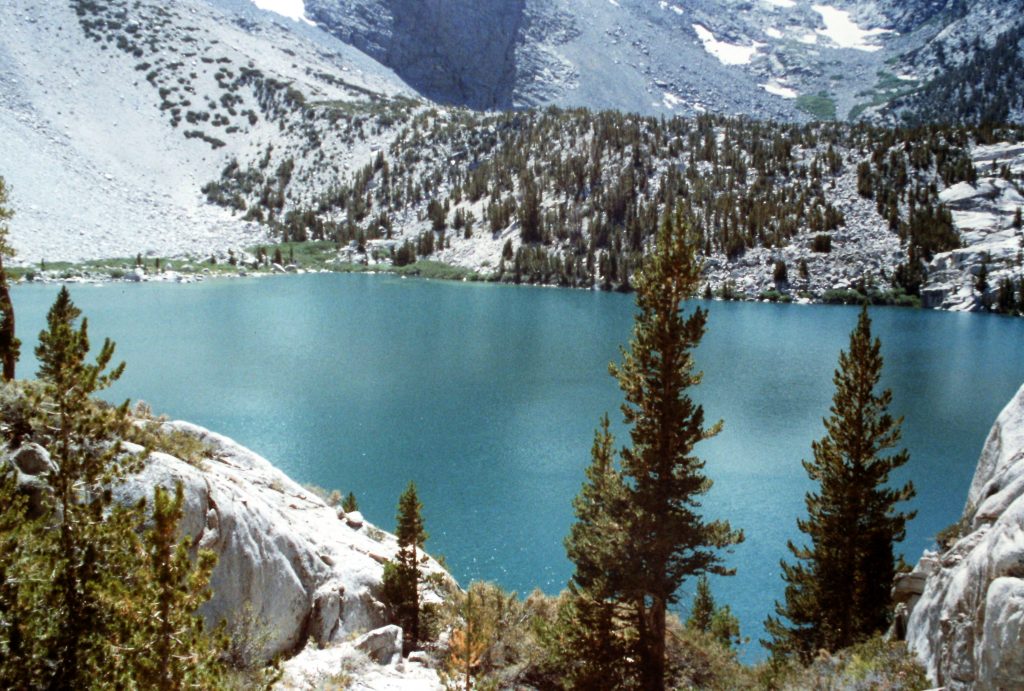 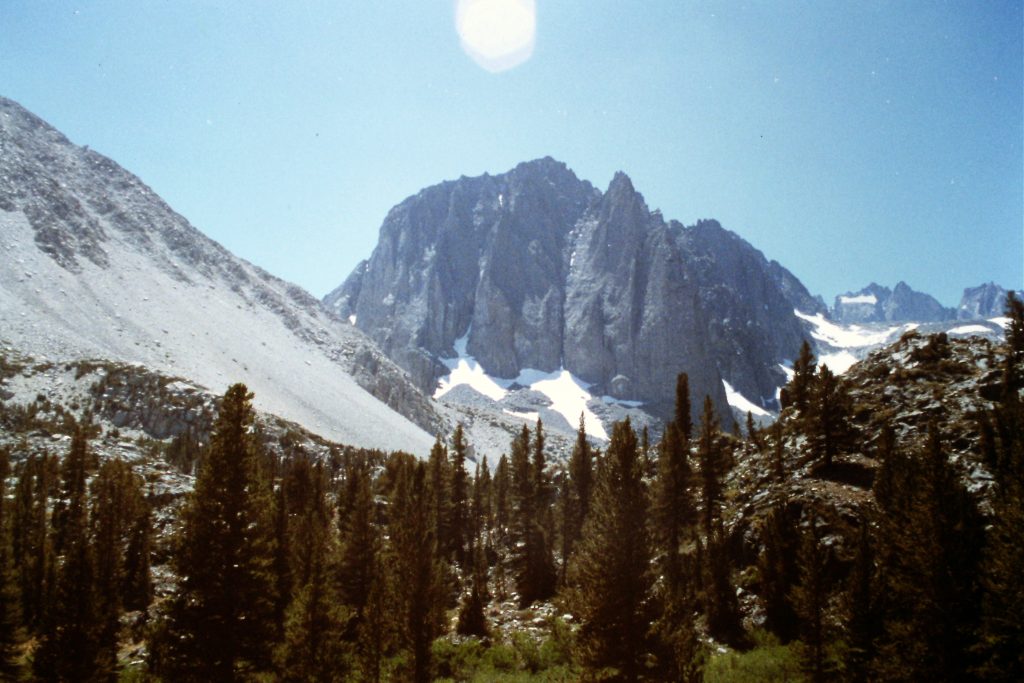 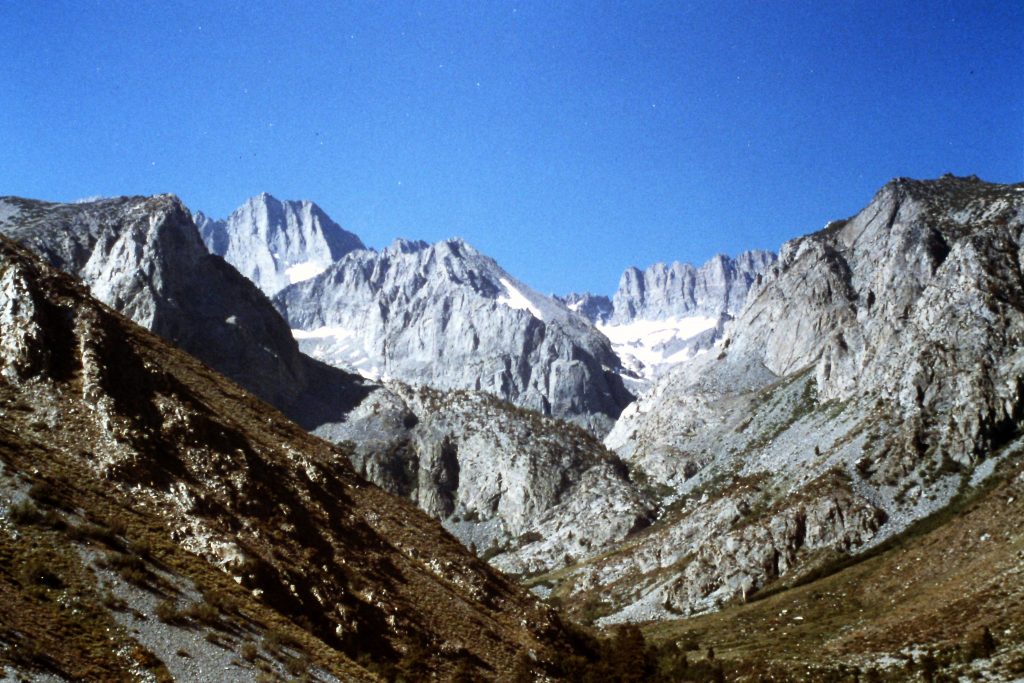 On September 3rd we left Second Lake and hiked crosscountry due south to Contact Pass, 11,760 feet. On the pass we attempted to find an alleged Class 3 crack that, according to the guidebook, led to easier slopes above the pass and then to the summit of Temple Crag. We were unsuccessful in locating anything that was less than Class 5. After an hour or so of searching up and down the walls above the pass, we loaded up and continued south to unnamed lake just below Contact Pass where we set up camp. We walked just a bit more than two miles for the day. This short day was designed to let us acclimatize. 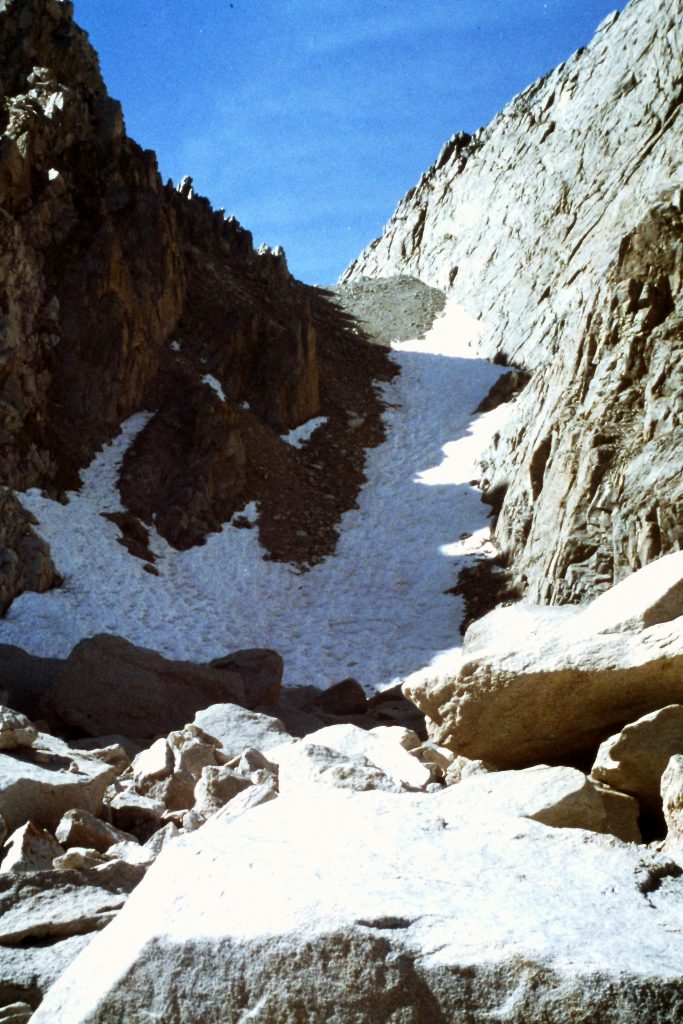 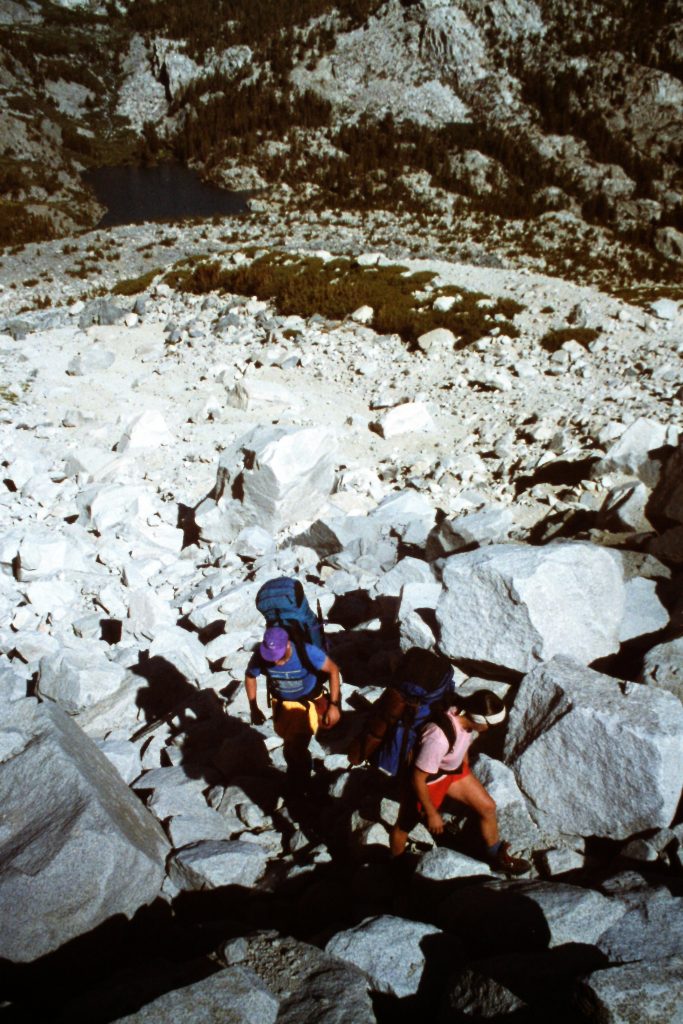 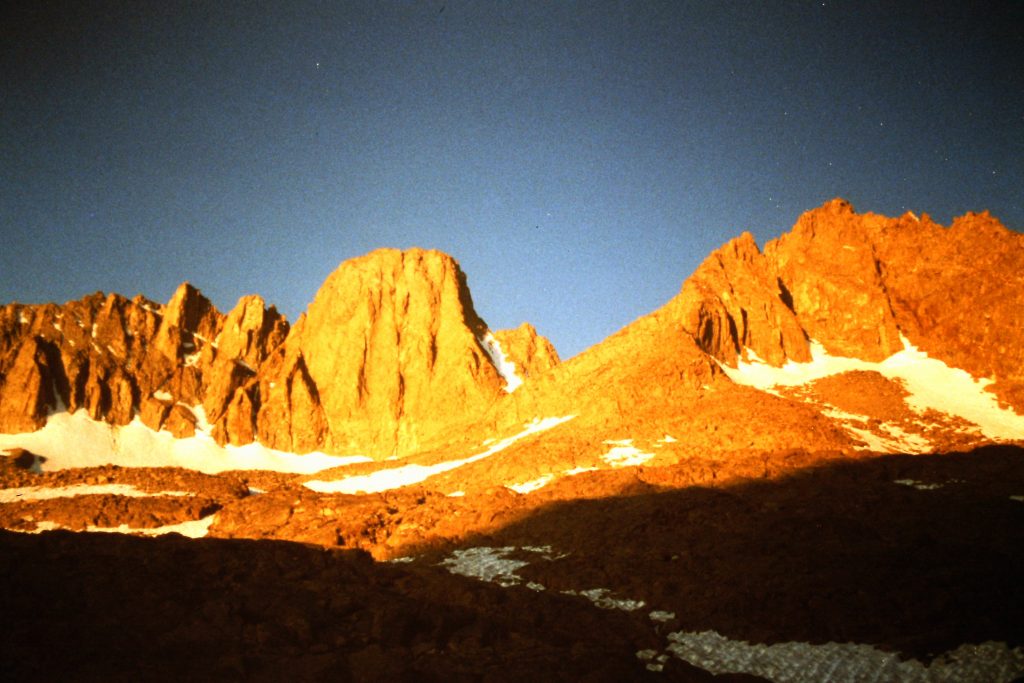 Mount Sill and Gayley from our second campsite.

On September 4th we climbed Mount Gayley, 13,510, from our camp via the peak’s southwest ridge Cl. 3. Gayley sits south west of Temple Crag and was a nice consolation prize. We used the rest of the day to rest up for the next day–which would be the hardest day of the trip. 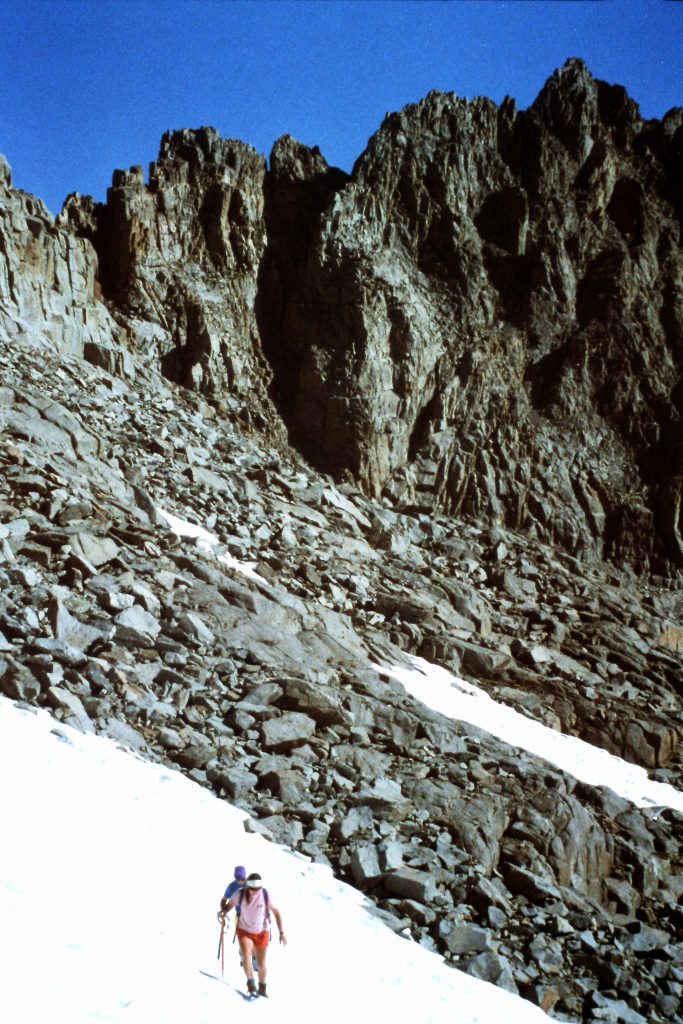 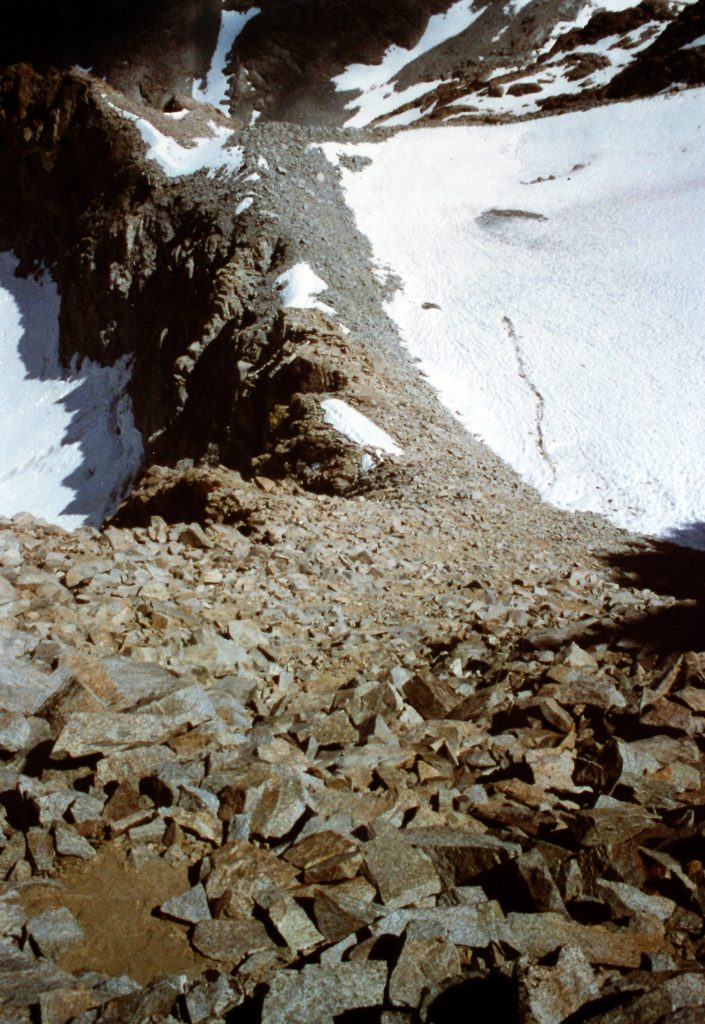 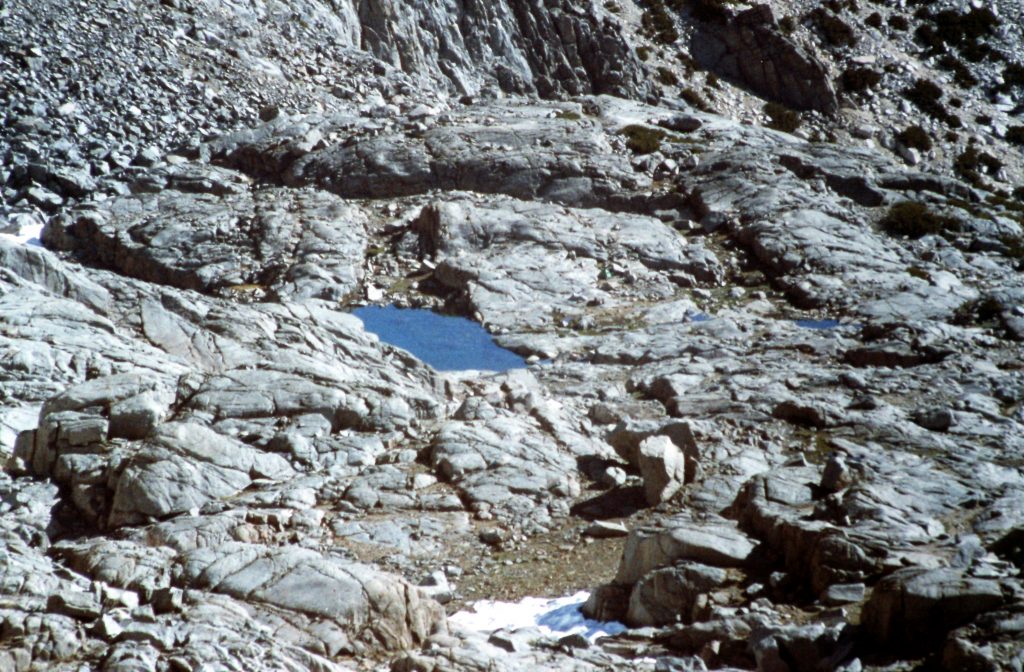 The small lake where we camped. 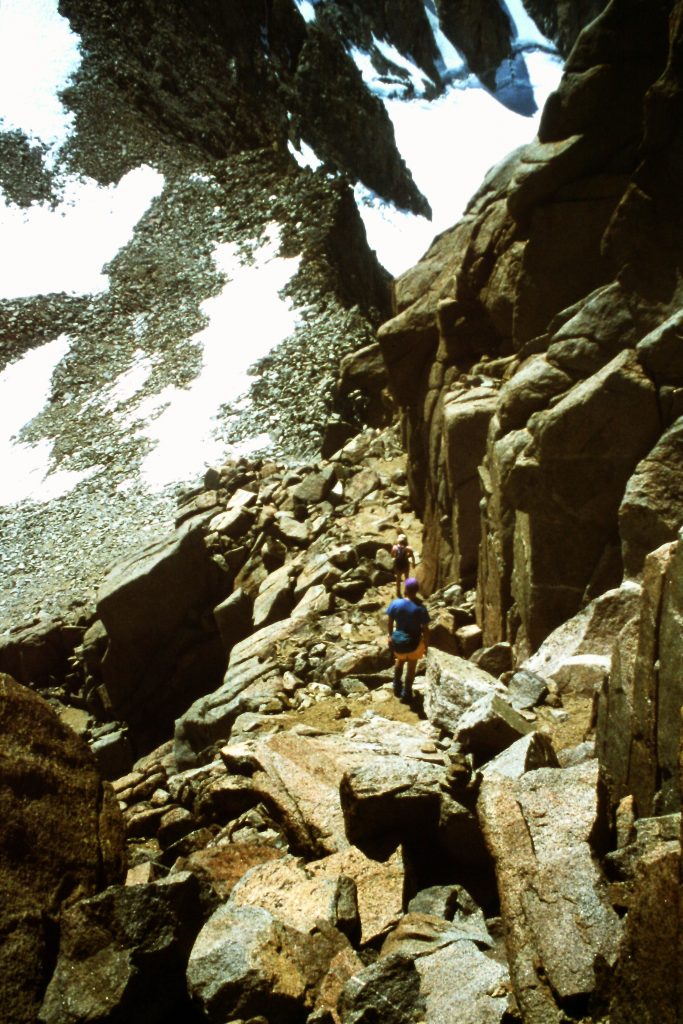 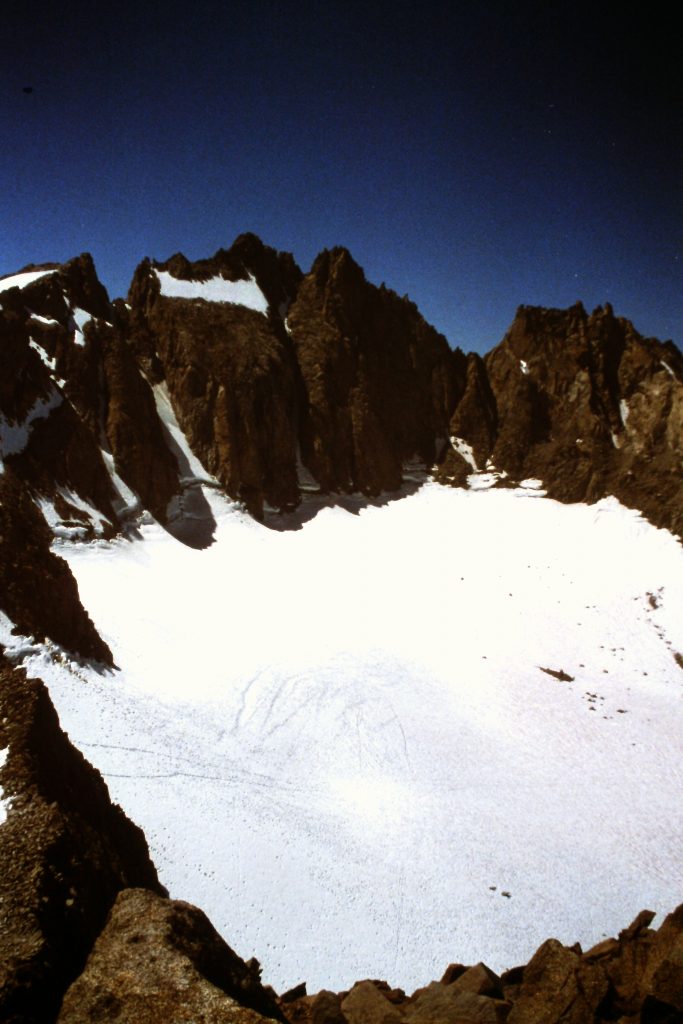 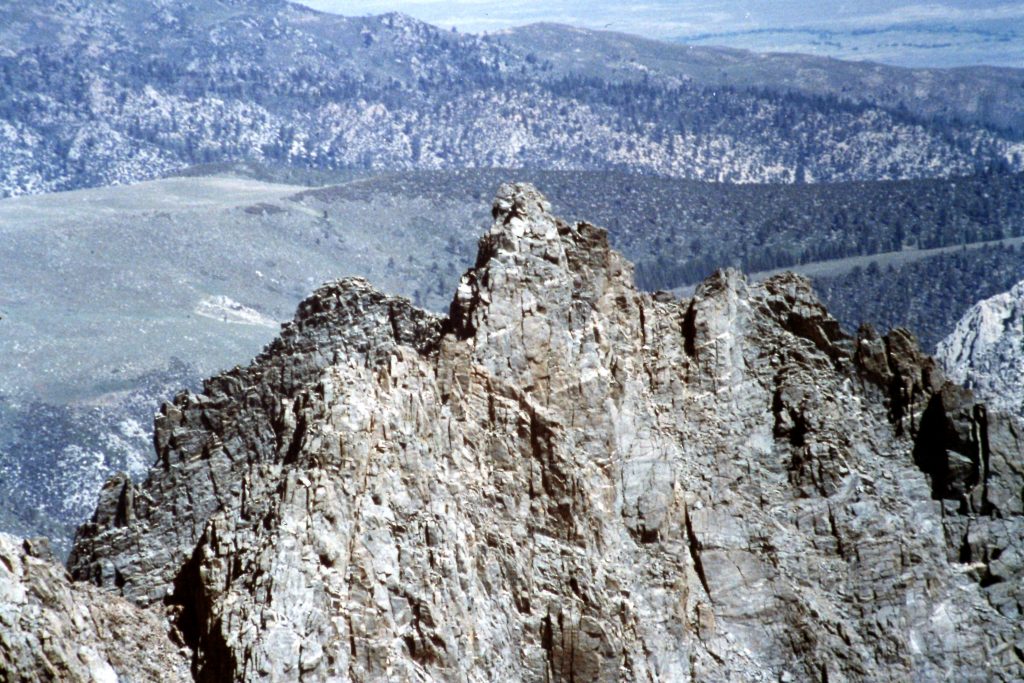 Temple Crag from Gayley. Is there really a Class 3 route?

The next day, September 5th, we set out to cross the Sierra Crest. This entailed crossing Scrimitar Pass. I should note that this pass is not really a pass. It is actually a ridge crossing at more than 13,400 feet. Our route took us from our camp to Elinore Lake across big, lose talus. From Elinore Lake we followed an angled route toward the crest, avoiding a large snowfield along the way. Once on the crest we marveled at the view and hiked down to an unnamed lake at 11,627 feet in the upper Glacier Creek Basin. We were now in Kings Canyon National Park. The ridge crossing was Class 3. After lunch we climbed Mount Jepson, 13,390 feet, from the lake via its south ridge. This class 2 ascent was much easier than crossing Scrimitar Pass. Our milage for the day was 3.8 miles. 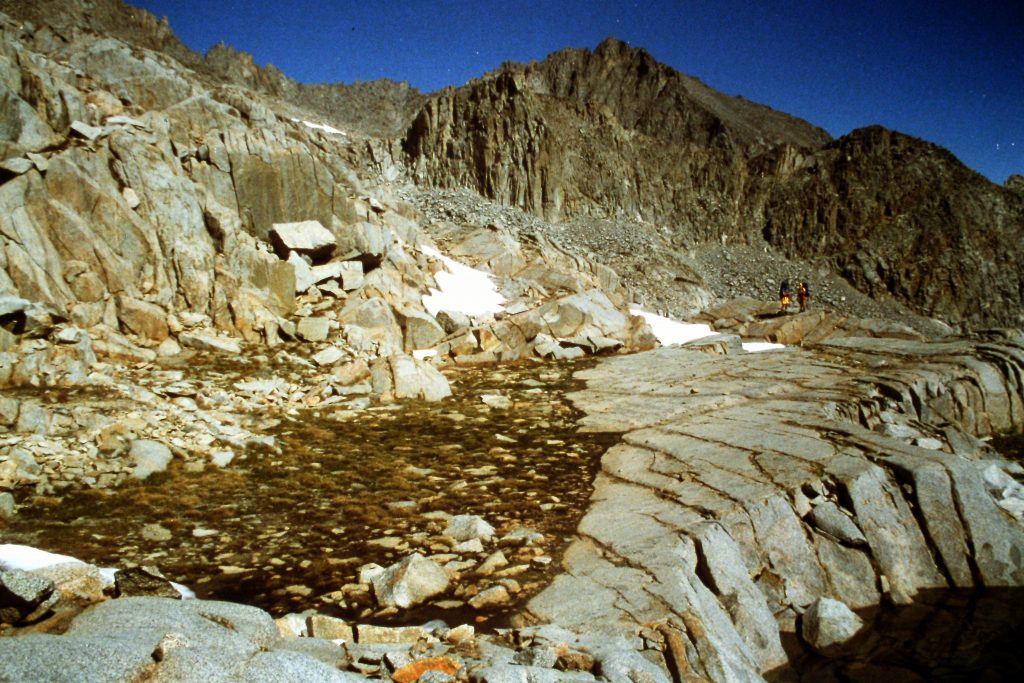 Starting the climb to Scrimitar Pass. 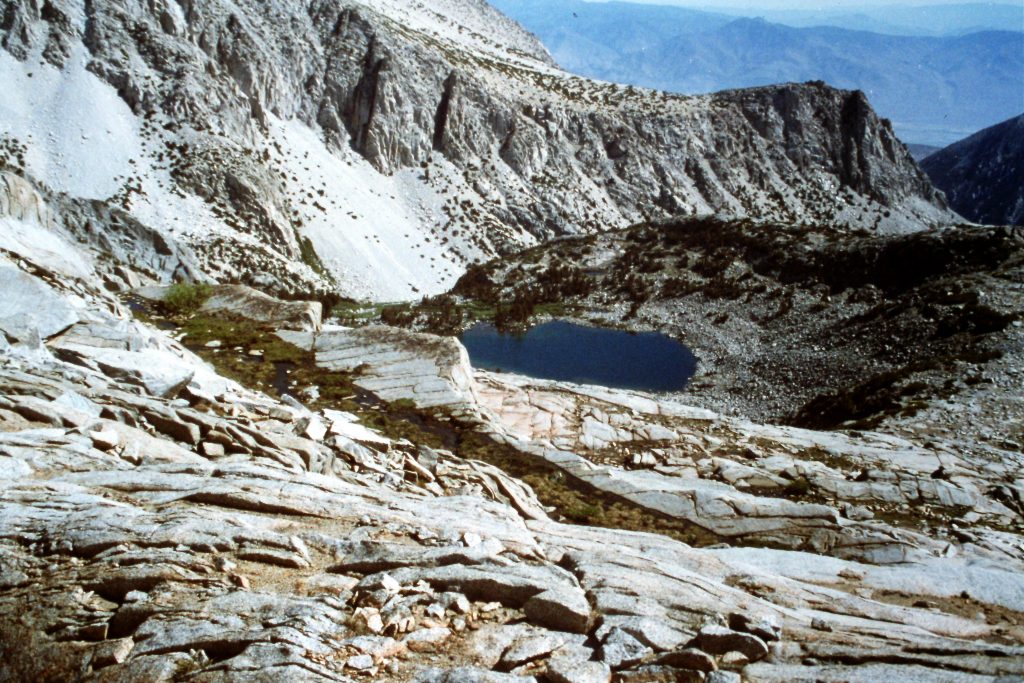 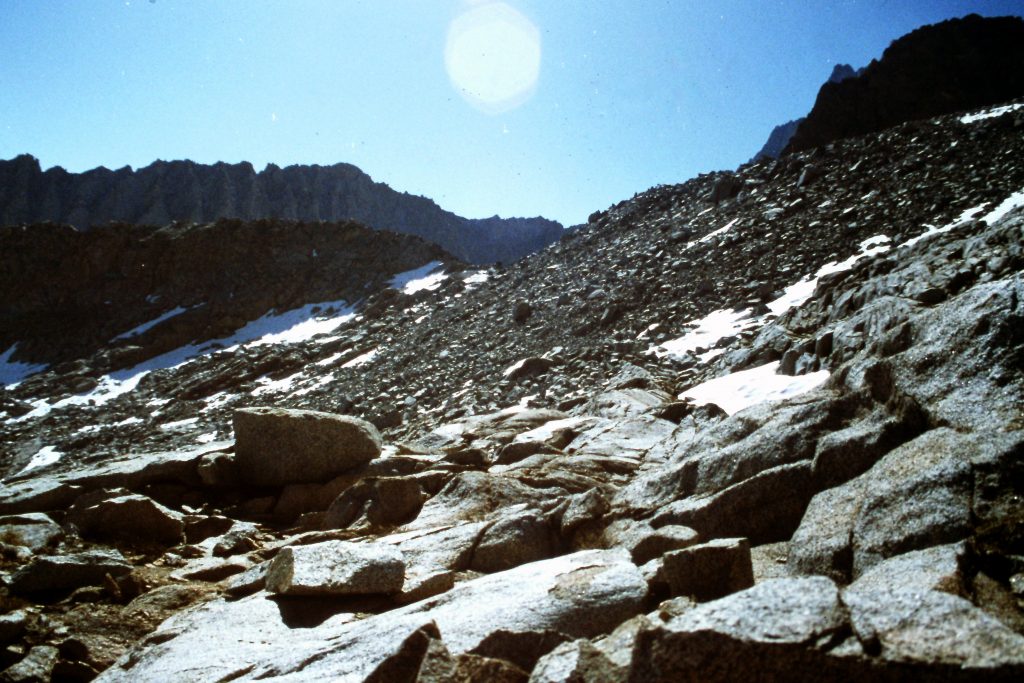 An area with decent footing below Scrimitar Pass. 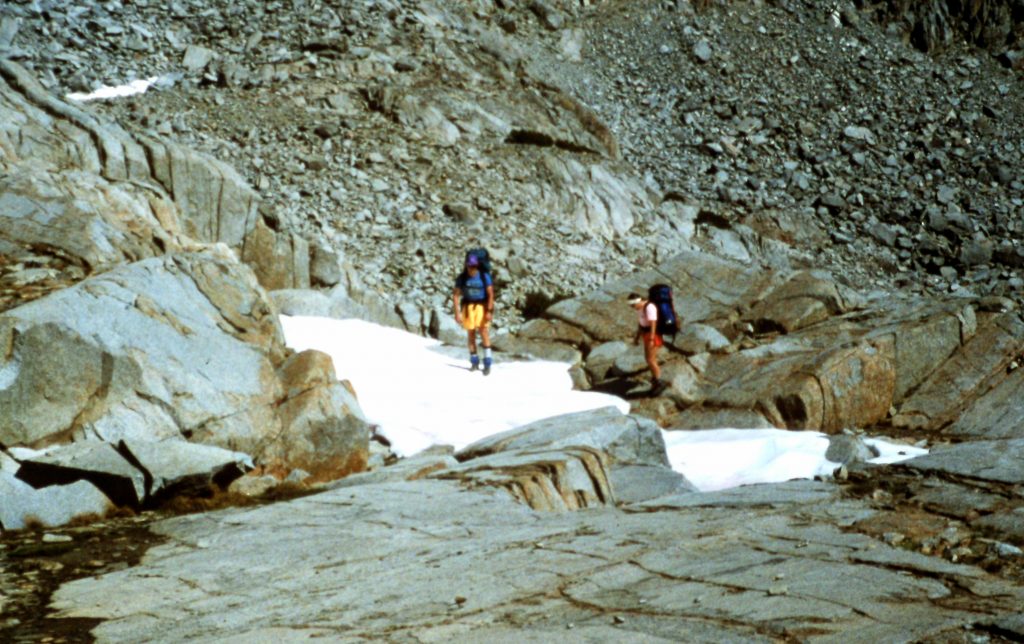 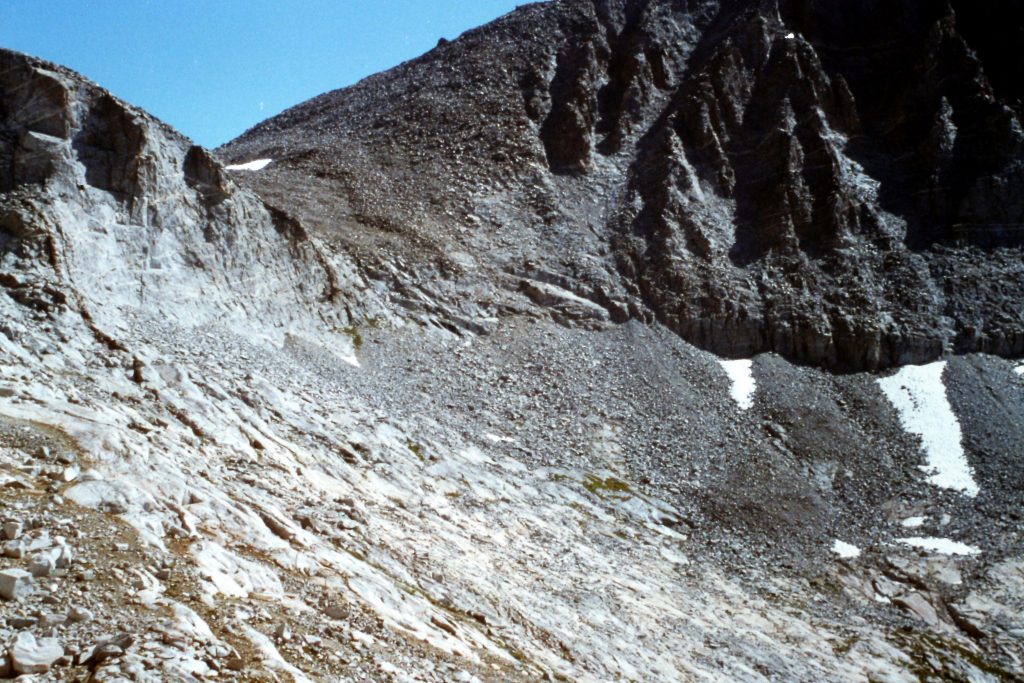 West of the crest looking back to Scrimitar Pass. 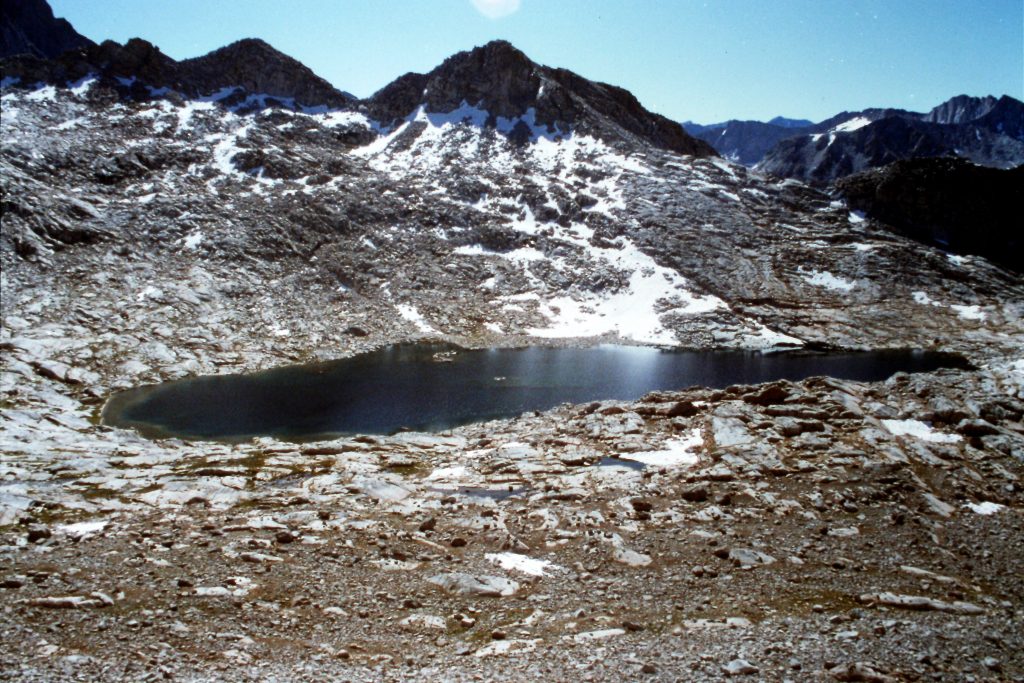 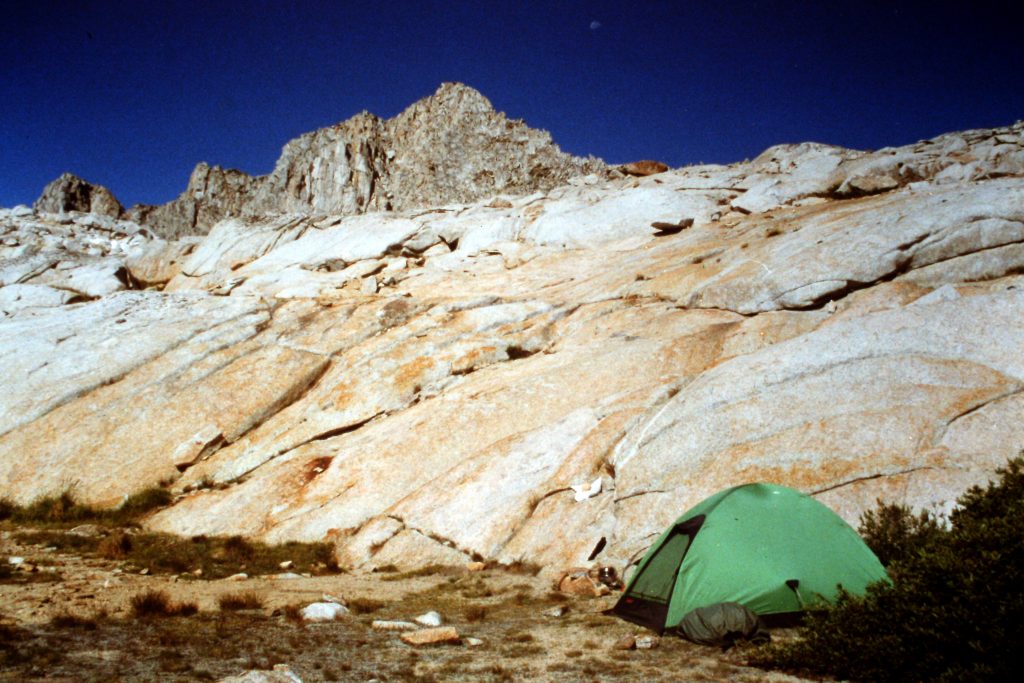 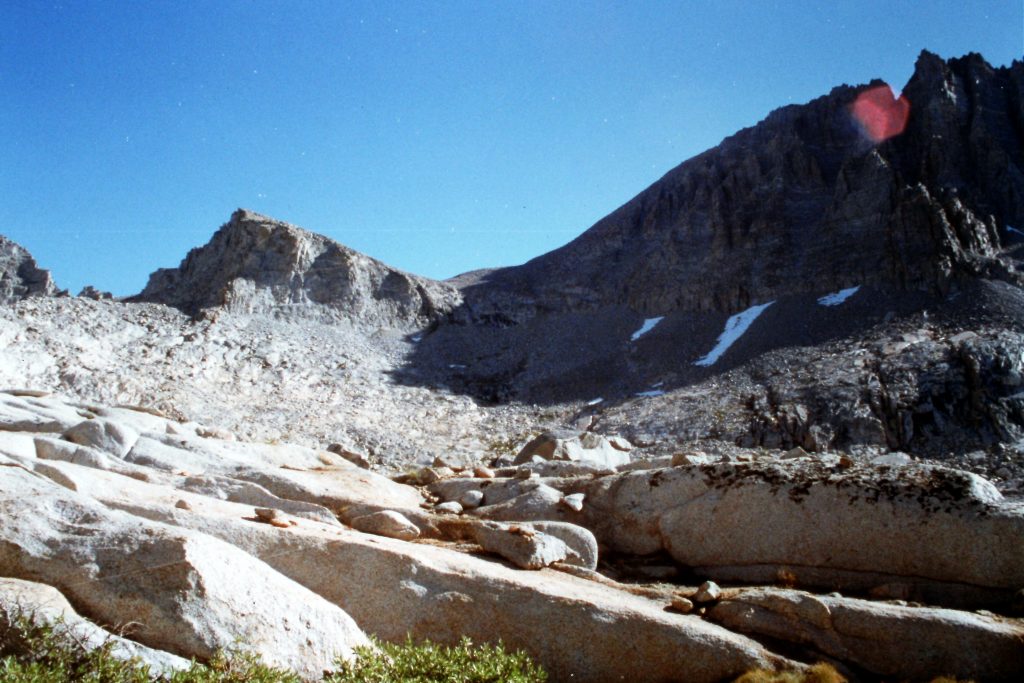 Jepson on the left and Scrimitar Pass mid photo.

On September 6th we climbed of Mount Sill, 14,124 feet via south face which was Class 3 with one exposed notch along the way. We covered 3.6 miles round trip. 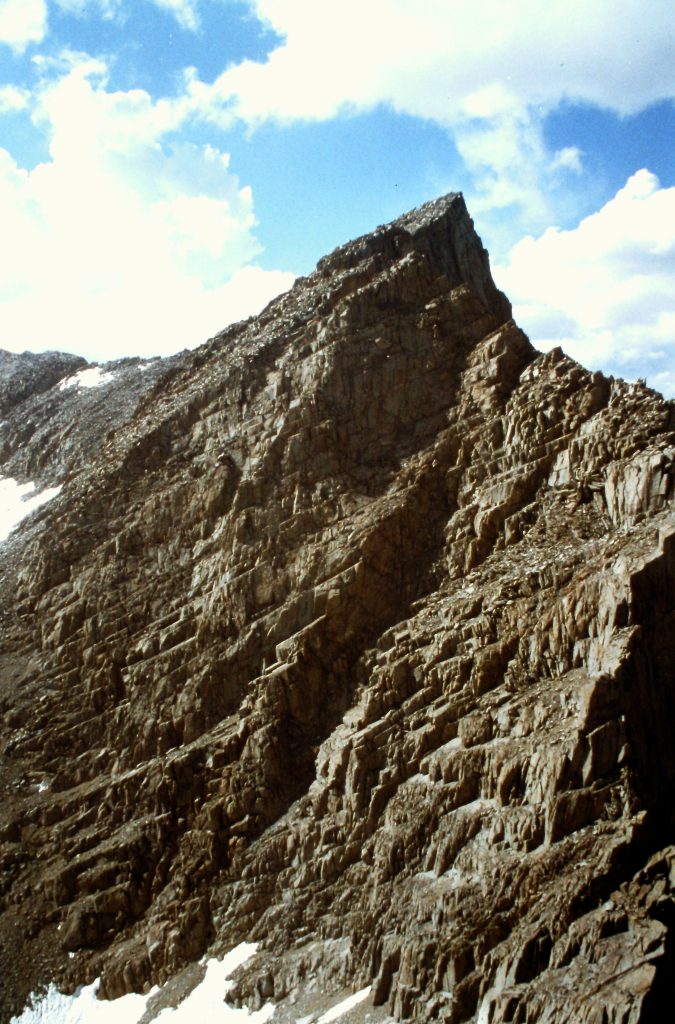 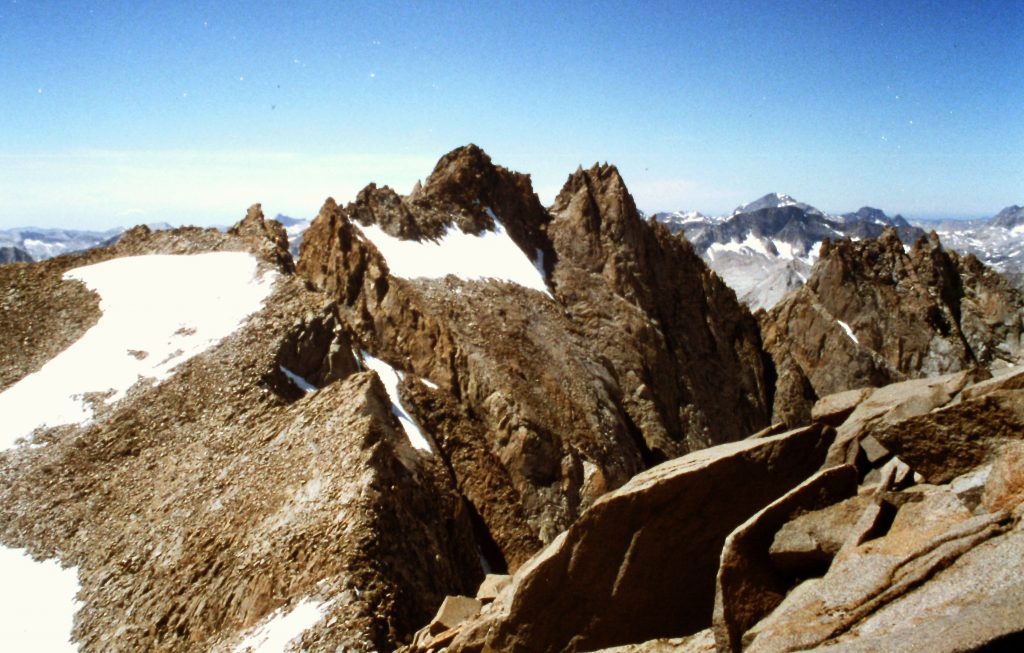 The North Palisade from Mount Sill.

September 7th saw us on the move again. We left our camp at the unnamed Lake and headed crosscountry toward Dusy Basin via Palisades Basin, Barret Lakes and Potluck Pass. After crossing Scimitar Pass the 12,120 foot Potluck Pass was easy. After lunch below the North Palisade we continued north and crossed over and Knapsack Pass, 11,673 and then set up camp in Dusy Basin. Both of these passes were Class 2 endeavors. We hiked 4.5 miles for the day. 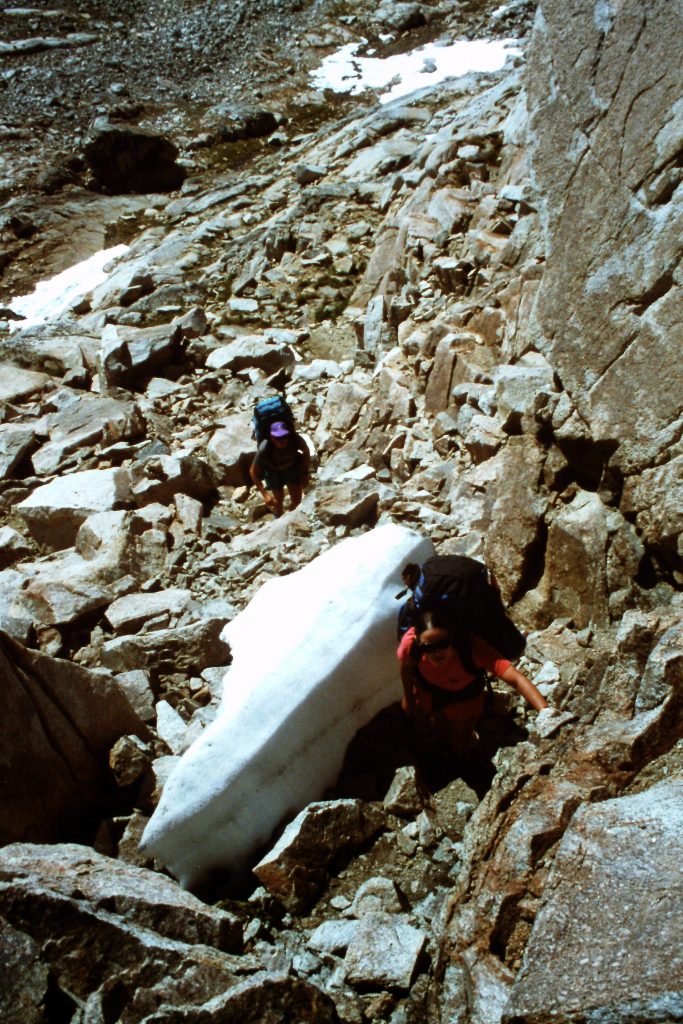 Climbing up Potluck Pass. The guidebooks call it Class 2. It seems a bit harder to me. 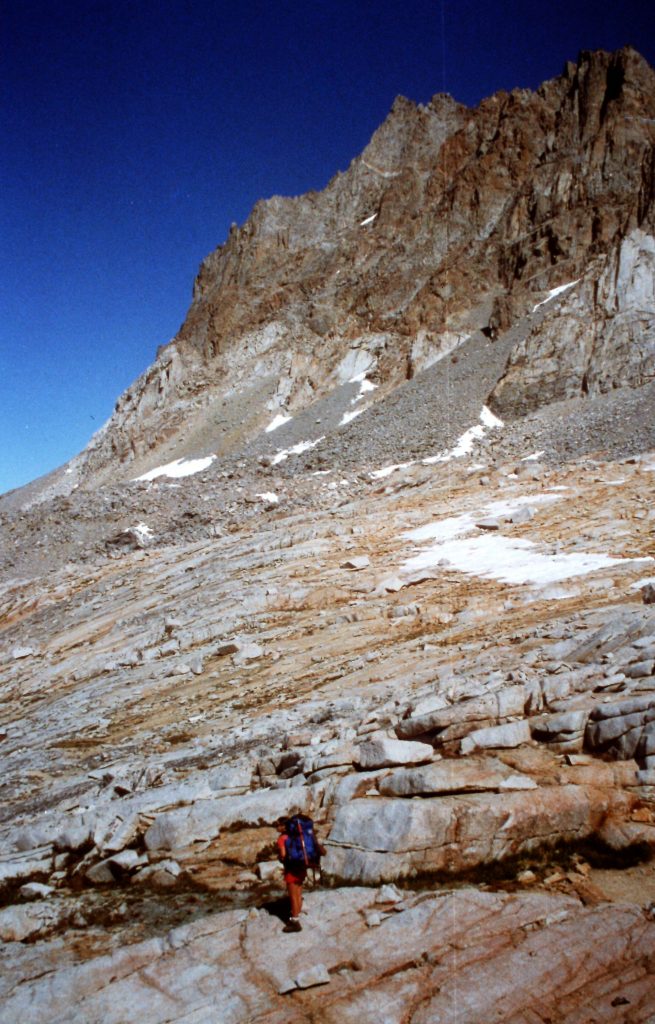 Descending down Potluck Pass below the North Palisade. 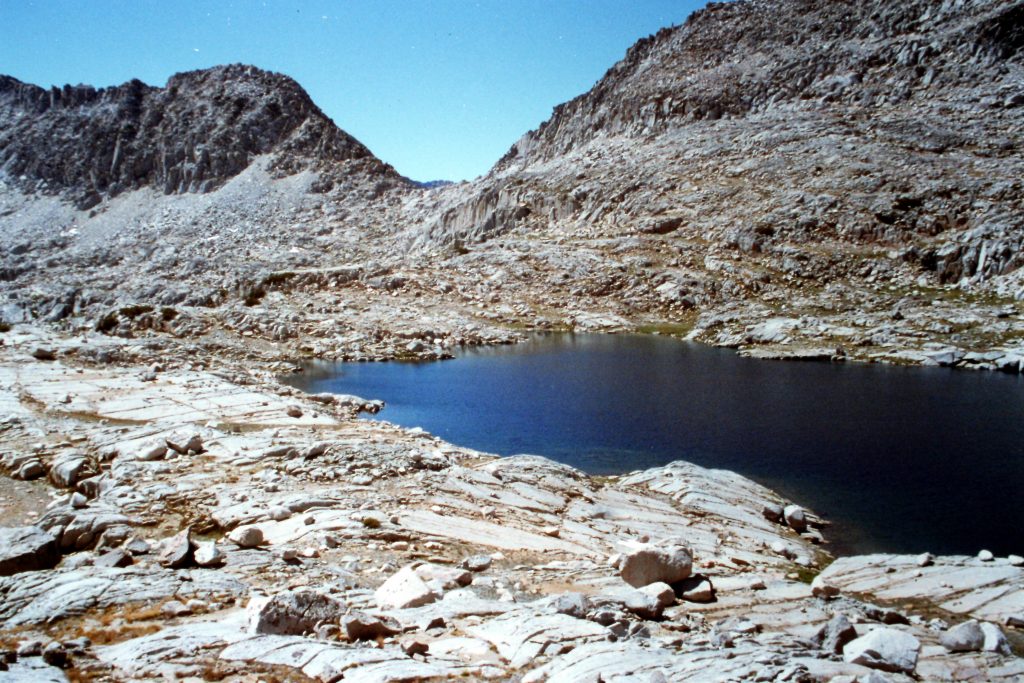 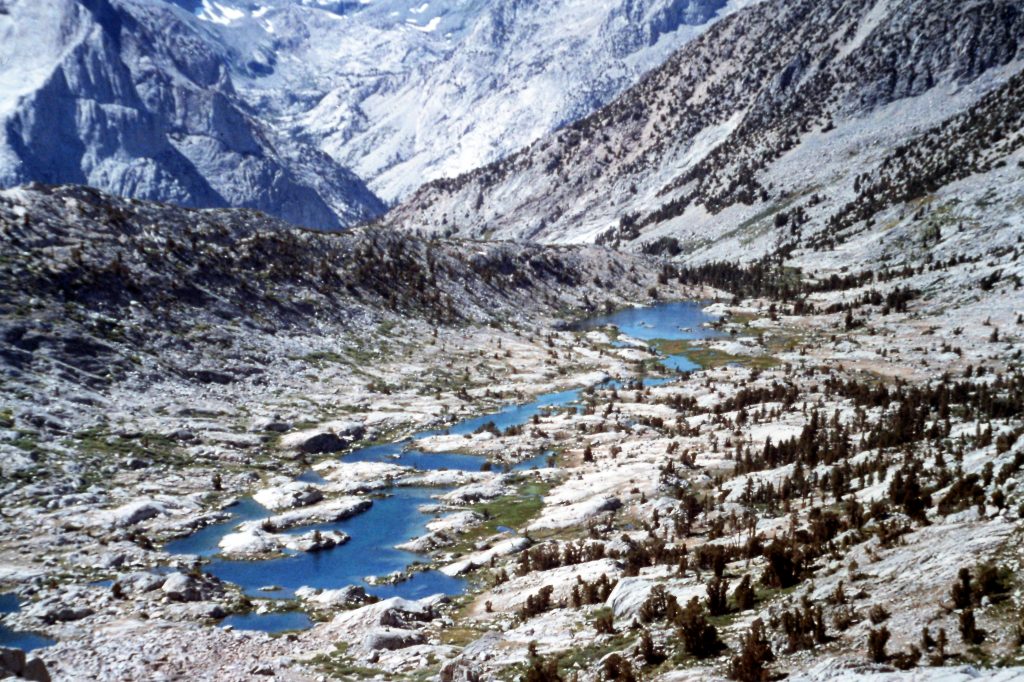 The lakes in lower Dusy Basin. 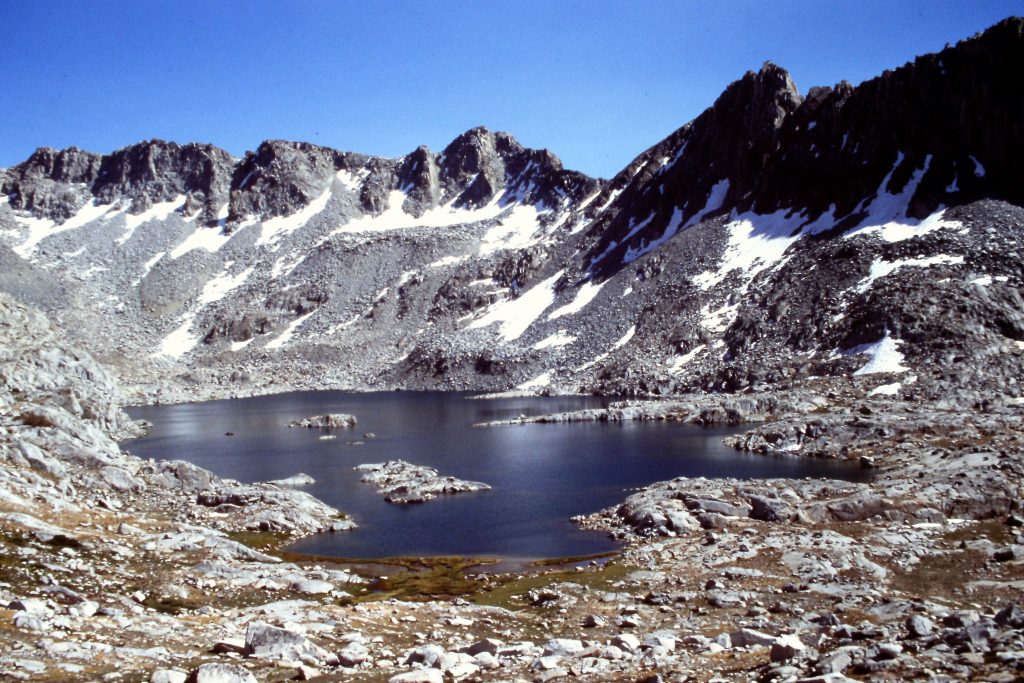 On September 8th we climbed Mount Aggaziz, 13,893 feet, from Bishop Pass and then returned to our camp. This was a 5.0 miles round trip. 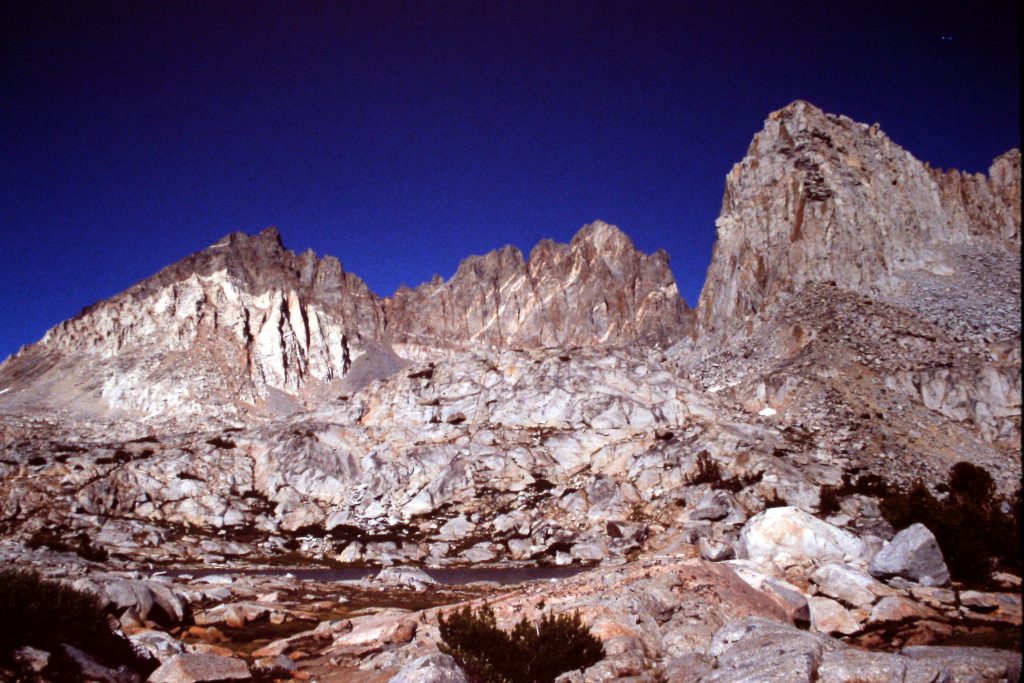 Mount Aggaziz on the left.

Our original plan was to cross Bishop Pass via the trail and then strike out crosscountry to cross Jig Saw Pass. From Jig Saw we could drop into the North Fork of Big Creek and hike directly back to our vehicle. However, on September 9th this plan was not looking that rosy. After we crossed Bishop Pass, 11,872 feet, and got a look at the rugged and trailless Jig Saw Pass we decided on a new plan. The new plan was to follow the trail out to Bishop Creek and then hitchhike back to the car. I was unceremoniously picked to do the hitchhiking. Dusy Basin to South Lake via Bishop Pass was an 8.0 mile jaunt.

I managed to strike up a conversation with a hiker on the way down the mountain and he agreed to drive me to our car. Our total milage for the trip was 32 miles of which 18 miles were trailless.

Looking down to Bishop Lakes and the end of the trail.