[I will add more photos for this trip if and when I find my slides. In the meantime, there are two links below that contain many photos of the route.]

In 1994, my friends Debbie Barnes and Syd Keel invited me to join them on a backpack trip through Grand Gulch. The Gulch is part of Cedar Mesa, one of Utah’s most interesting and prehistorically important areas. Debbie and Syd were long-time Utah canyon explorers and I could not pass up the opportunity. Our group ended up totaling 8 climbers.

Cedar Mesa is cut by a network of canyons filled with prehistoric ruins and rock art panels. In addition to the ruins, there is beautiful scenery. Water has cut Grand Gulch’s sandstone into spectacular red-orange canyons with arches, cliffs and massive alcoves that were used by indigenous peoples for shelter. Many of the alcoves were filled with ruins. Some were easily accessible. Others could only be reached by Class 4-5 climbing.

Another feature of the canyon is the dark streaks (known as desert varnish) on the cliff walls. These streaks are water-deposited minerals combined with a thin layer of microscopic bacteria. According to the BLM:

“The clay particles hold water that runs down the cliff faces, enabling the bacteria to survive. The bacteria absorb trace amounts of the minerals, and then precipitate it as a dark layer, or streak, on the rock surfaces. The darker the streak, the longer the process has been happening.”

For me, the most striking element was the ruins of the ancestral Puebloans who inhabited the canyons and the mesas 700-2500 years ago. The ruins, including dwellings, farming areas and rock art sites, are still in wonderful condition. The stone and bone tools, pottery pieces and other artifacts are still important to the modern-day Hopi, Ute, Navajo and various Pueblo tribes. If you make this hike, please be respectful and leave everything as you find it.

When we hiked Grand Gulch in 1994, we found only hiker-created trails in the canyon. Most of the route had a decent tread and some cairns. The stream bottom offered an alternative route in places. However, the stream bottom meanders and we often found use trails cutting paths across the big curves which shortened the trip a bit. We walked on slick rock whenever possible to minimize our impact.

It was evident that water (probably during flooding) causes the trail to erode frequently. It likely that the path we followed in 1994 has changed significantly since then. We crossed areas where the brush had been flattened by recent flooding and we found mud and debris across the canyon floor in a number of spots. The meanders, mud, sand and debris made the hiking slow at times.

We arrived late on May 1st and camped near the trailhead by the Kane Guard Station. It froze hard during the night at our camp which was at roughly 6,400 feet. So we were up early and well on our way to Split Level Ruins, 10.0 miles away. In the process, we descended 600 vertical feet where the temperature was much warmer.

On Day 2, we hiked from Split Level Ruins to the junction with Bullet Canyon which covered about 5.5 miles. We picked this area to camp because we wanted to make a side trip to Jailhouse Ruin, which was 4.8 miles away. Camping spots were limited at this junction so our group spread out in an effort to find 4 tent sites. I found a slick campsite about 100 feet above the canyon and higher than the cottonwood trees that filled the bottom of the canyon. We decided to not use the tent as there were few insects and the weather was clear and warm. The night sky was terrific from this vantage point.

Day 3 found us facing a long walk from Bullet Canyon to Big Man Panel. This involved a 9-mile walk that turned out to be the toughest day we encountered. This stretch of canyon was filled with time-consuming obstacles, meanders, deep sand and mud.

Day 4 was similar to Day 3–just under 9 miles as our route led from Big Man Panel to the Bannister Ruins. 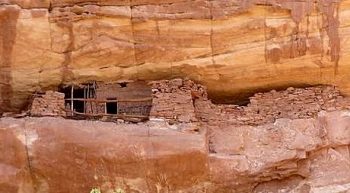 The Bannister Ruins in 1994. It appears from reading recent trip reports that the increased use over the past 23 years has been gentle and the ruins are still in good shape.

Day 5 (our final day) took us to the Collins Spring trailhead in 5 miles where we had left our shuttle vehicles. The trail that climbed up and out of the canyon was actually a maintained trail. It was roughly a 400 vertical foot climb out of the canyon.

A few of the necessary details

A lot has changed since 1994. You now need a permit to make the trip and there are a lot more regulations designed to protect the fragile aspects of the canyon. I have listed addresses below as well as a link to a BLM brochure that has a lot of details on the geology and history of Cedar Mesa and Grand Gulch as well as information on securing permits.

This link will take you to the a BLM brochure (in PDF format) that has a lot of important details. BLM Brochure. There is a lot of good information about Grand Gulch on the Internet including the following two links. The first is hosted by Jay Archer David: Grand Gulch Utah: Story Teller’s Tour and the second is at Hiking and Walking: Grand Gulch.

Mr. David’s musings have all that you will need and more to plan your trip. The BLM notes that the hiking season is generally from March through October. July and August will not only be very hot but are also the season of monsoon rains. The canyons can be dangerous during these storms. “Encountering a flash flood is a serious concern while hiking. Know the weather forecast before going into the canyons.”

One other thing that the BLM wants you to know is that:

“The dark crumbly-looking soils next to the trails are actually living
‘biological soil crusts.’ They are made up of lichens, mosses, green
algae, micro fungi and cyanobacteria. These organisms bind the soil
together, making it resistant to wind and water erosion. Walking on
these crusts can destroy them! Stay on the trail or try to walk only in
washes or on rock when possible.”

Cedar Mesa is managed by the Bureau of Land Management. For more information, write: