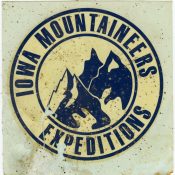 The Iowa Mountaineers climbing club was a major player in the in early Sawtooth Range exploration. The club was founded by John and Ede Ebert in 1940, as the University of Iowa Mountaineering Club. The club later incorporated as a not-for-profit Iowa corporation and became a major force in sponsoring climber education and expeditions throughout the world. Schwartz Pinnacle, Harriets … END_OF_DOCUMENT_TOKEN_TO_BE_REPLACED