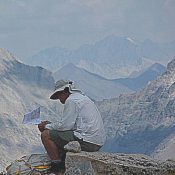 The Sierra Nevada are well known for spectacular granite scenery, crystal clear mountain lakes and stable Summer weather. During seven days in August of 2012 I experienced more thunderstorms than during all the preceding time I spent in the range. If timing is everything, my timing for this trip was a disaster.

Lake South America is one of the largest lakes in the Sierra Nevada. It is located in the upper Kern River Basin below the Kings Kern Divide. The lake is several days hiking from all feasible trailheads. My goal for 2012 was to reach the lake and climb the peaks flanking its northern shores. I chose a route that started at Onion Valley, the highest trailhead on the western side of the range. From the trailhead the route climbed over Kearsarge Pass, descended to the John Muir Trail (JMT) and then followed that trail south over Forrester Pass, the highest pass on the JMT.

My long time Idaho hiking companion, Basil Service, signed on with a goal of fishing every lake we passed.

8/9.  Left Boise at 7:30am and arrived in Bishop 9.5 hours. We picked up our prearranged wilderness permit, checked into a motel and checked our equipment and food in anticipation of any early start ether next morning.

8/10. On the trail at 8:20. Reached the Kearsarge Pass at 11:40. (2.75 hrs.) We enjoyed the expansive view and watched a pack train cross the pass. I first crossed Kearsarge Pass in 1975.  We stopped at Kearsarge Lakes for lunch and Basil took the opportunity to fish. In the next hour thunderstorms quickly developed over the basin. It had sprinkled on us when we dropped off of the pass but now the sky was threatening and it soon started to pour. Basil said the fishing was good. We changed plans and set up camp. 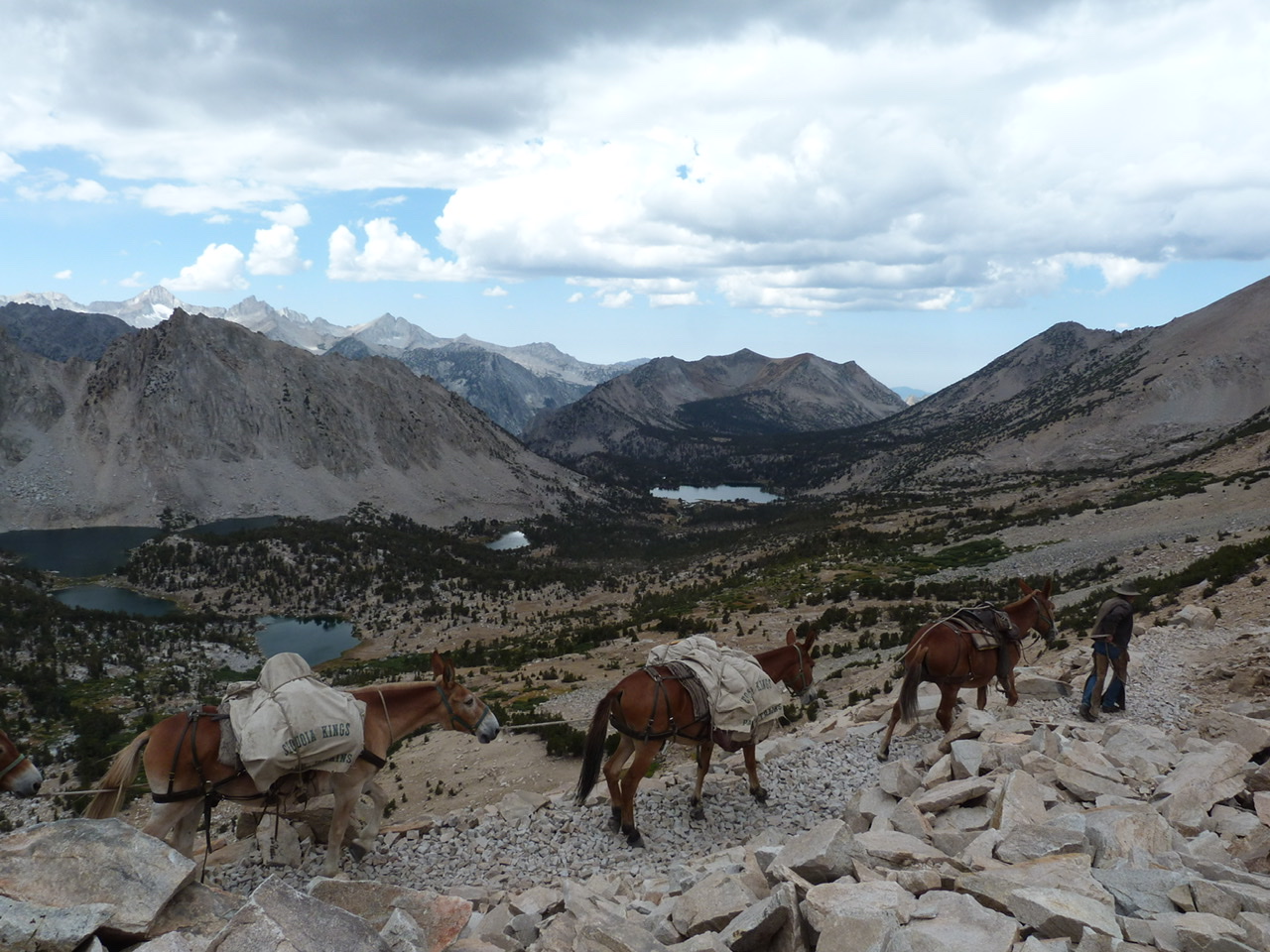 My starting pack weight was 46lbs which included ten days of food all packed into the required bear canister. The weight and the elevation made the hike a pull over the 11,800 foot pass. First days are always tough when I carry that much weight. 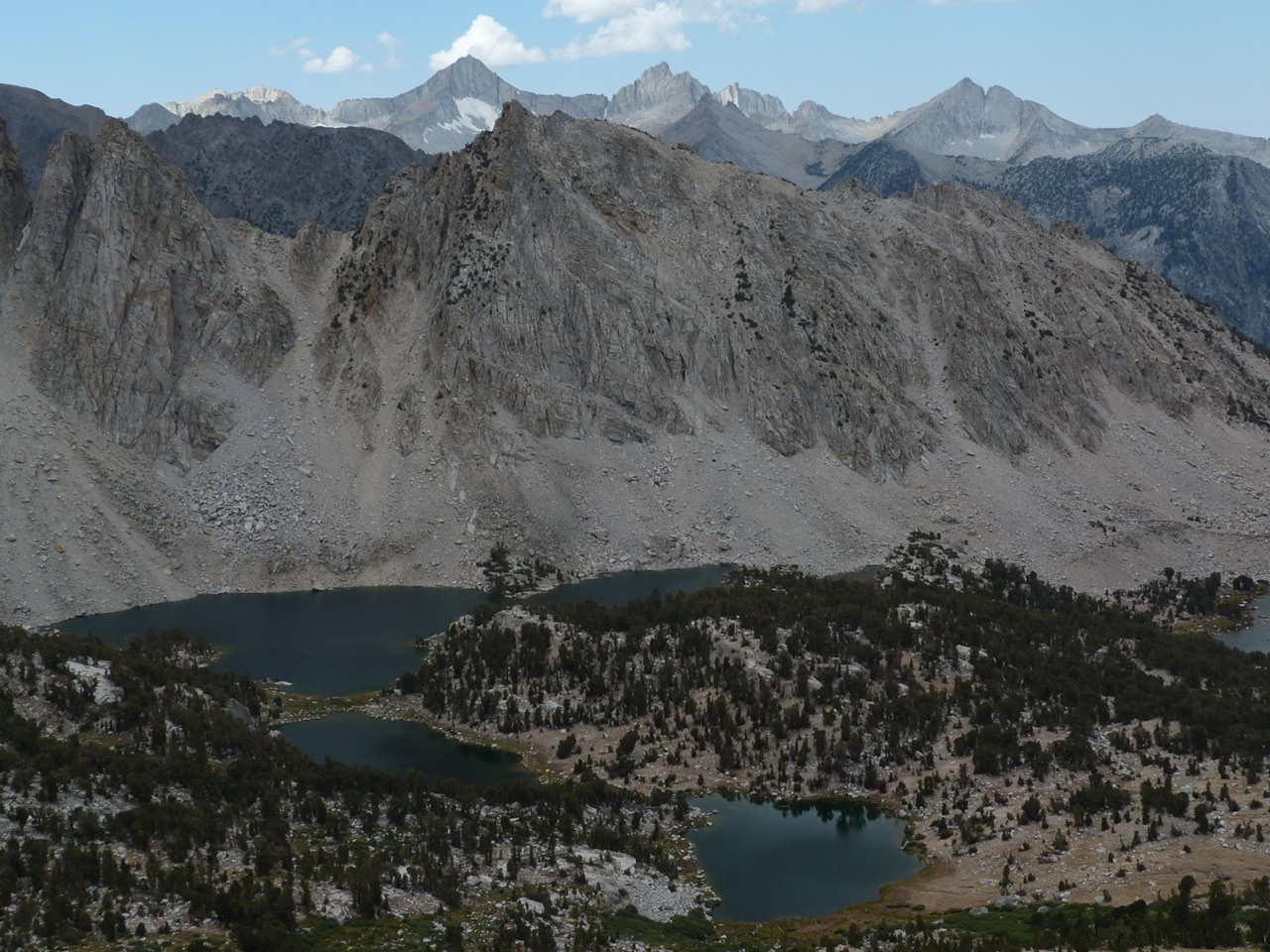 2:00pm. It rained for four hours with hail and lots of thunder.

8/11. The morning dawned with clear skies. We hiked south on the JMT toward Forrester Pass. After roughly 6.9 miles in 3.5 hours, we were still feeling the effects of the high elevation. Simply put we ran out of gas. We decided to camp at a less than appealing campsite near the trail. Basil’s left knee was bothering him. The sky was once  again clouding up with big thunderheads. We knew rain was likely again in the afternoon.

I remember thinking at this point, “As usual I think I bit off more than we can handle“ even though I could have gone on, I was happy to quit early.  We still had nine days so I knew we would round into shape before its all over.

The rain starts at 2:44 pm.  Light rain for two hours. Some thunder.

In the evening we were visited by a Backcountry Ranger. He was a nice guy who was working his 17th season in the Sequoia and Kings Canyon National Park backcountry. He had worked with some of the same people I worked with in 1974 and 1976. The ranger told us that rain was forecast through Thursday. High pressure around San Diego is sucking moist air into central CA. It was cloudy by ten AM.

8/12. I had a rough night with jumpy legs and headache interrupting my sleep. Lying awake I thought about shortening the trip or changing the route. Between Basil’s swollen knee and the weather forecast I was losing my enthusiasm for the effort it would take to reach Lake South America.

After a brief discussion we agreed to change our route to a more moderate line. We left the JMT and hiked into Center Basin which was not far from where we camped last night. (1.8 mi. 50 min.) I guess I’ll never make it to Lake South America. 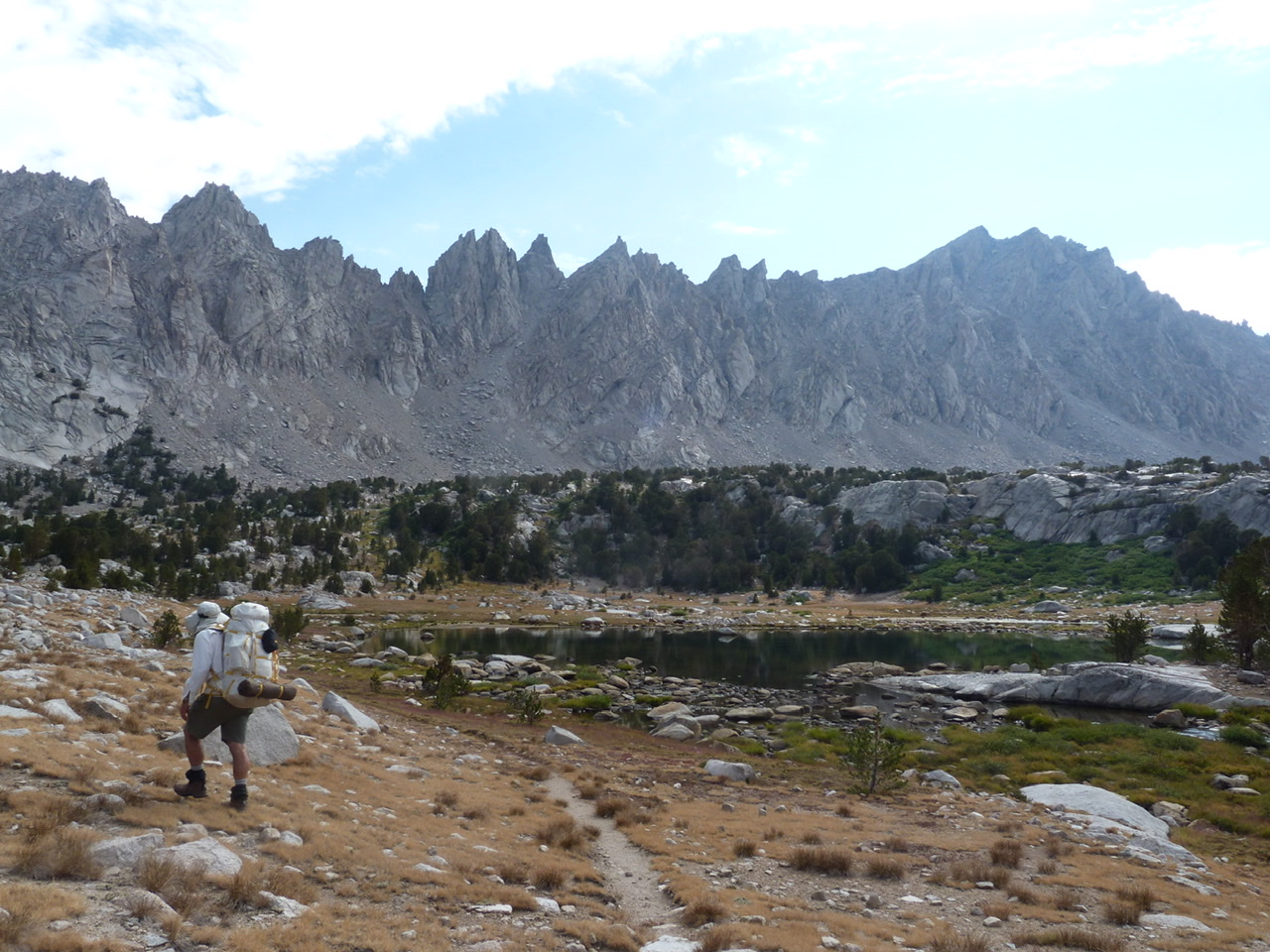 We found a nice camping spot in the little visited Center Basin. The little maintained trail, which was once the main JMT route, was in good shape once we found it.

2:11pm. Light rain with threatening clouds.  After threatening all afternoon it started to rain hard at 7:25 pm. I took one short walk to a lake and hung out in the tent reading and listening to music. Call it a rest day. 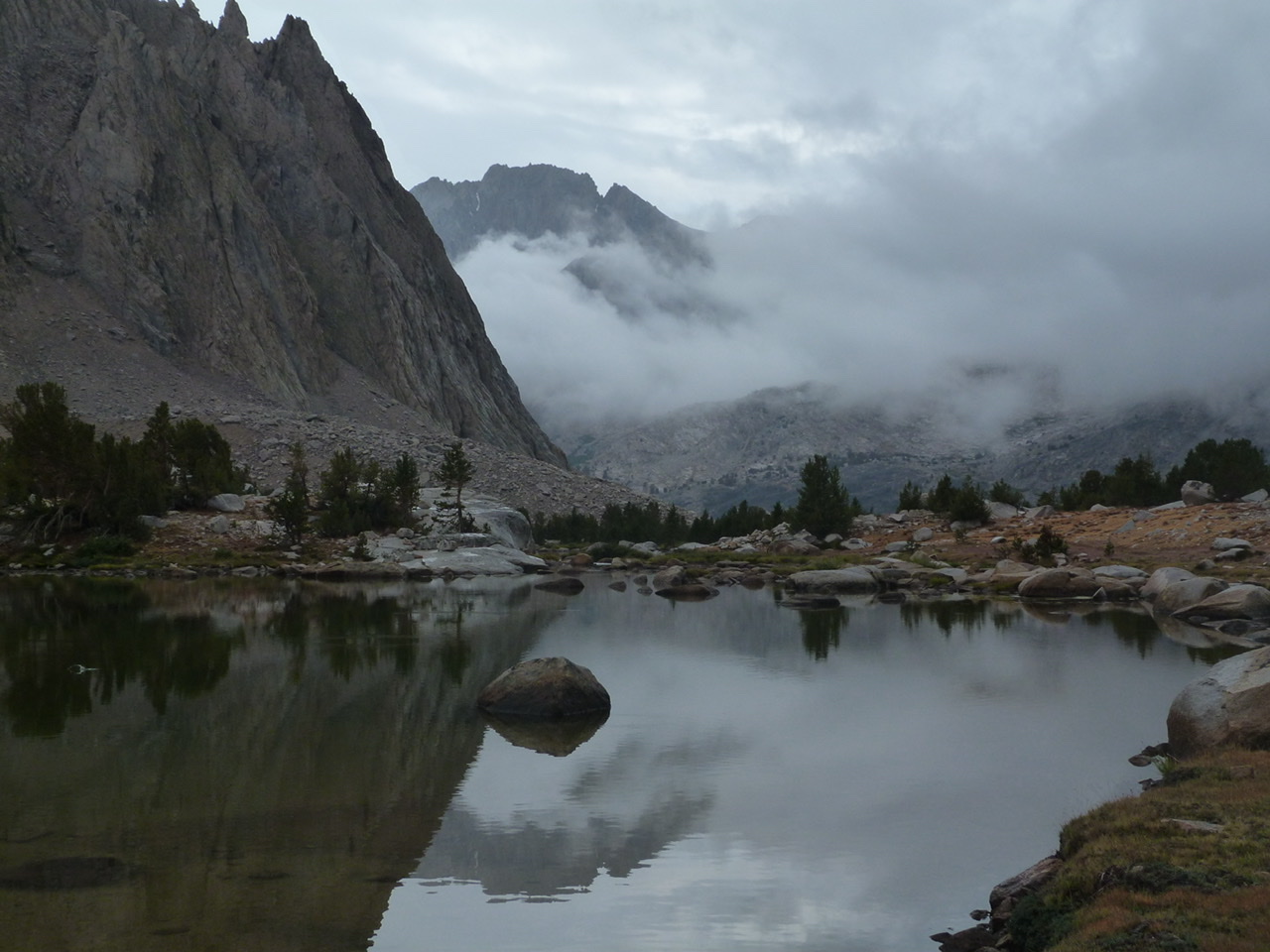 The calm between storms.

8/13.   Finally, we woke to good weather in the morning. We hiked to Junction Pass which is around 13,000 feet in elevation and then climbed Peak 12,795 feet. The peak was a jumble of granite spires and boulders. It took us quite a while to find the true summit and the old Sierra Club register.  (8.8 miles, 4.5 hours.) 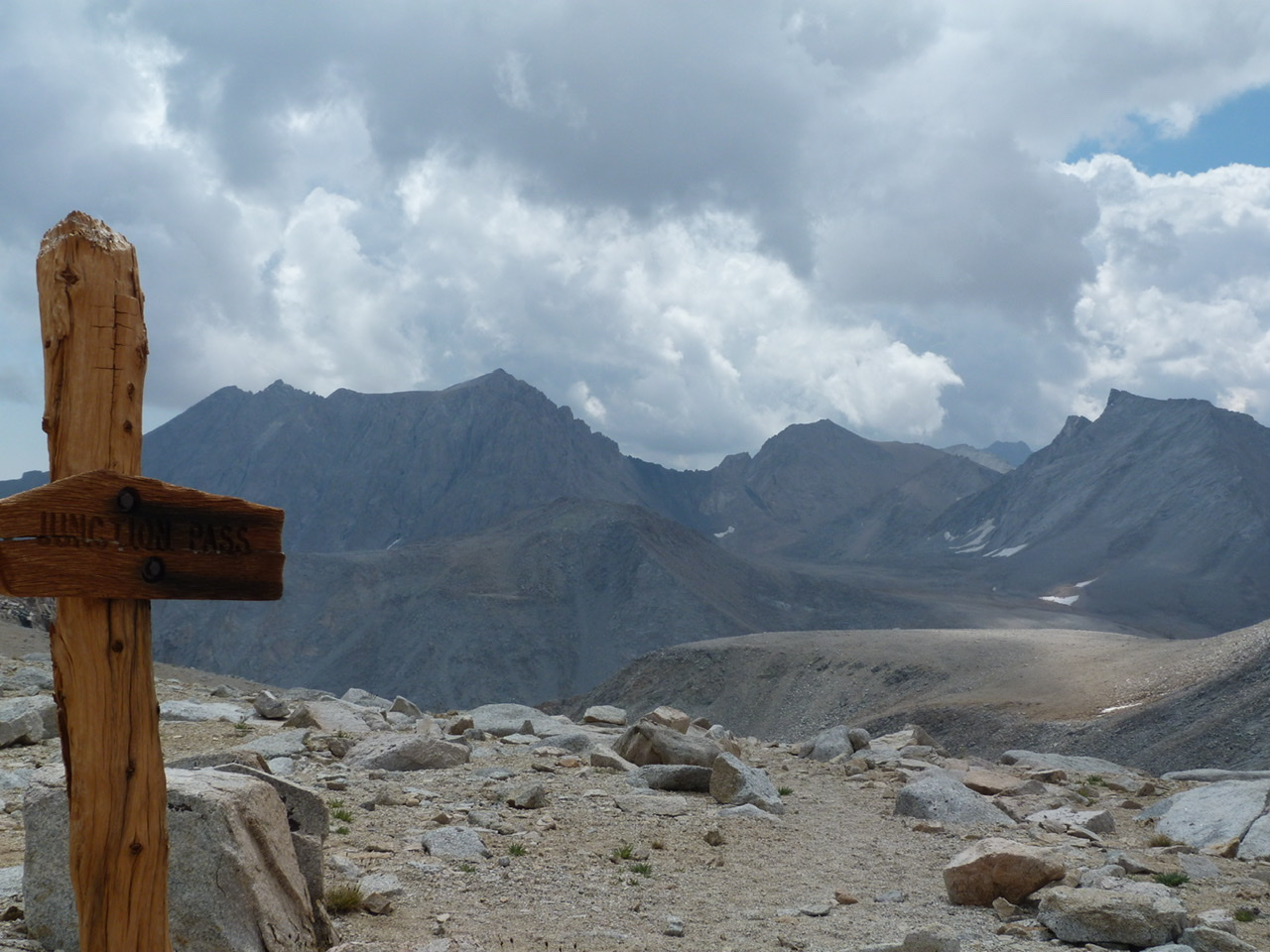 Junction Pass was once part of the John Muir Pass. The trail over it now sees little use.

The good weather didn’t last. On our descent, we suffered through a wicked hail storm. Sunny skies returned but back at camp the rain started again around 3:30pm. It rained hard for two hours. The evening was pleasant and I slept well.

8/14.  We decided to abandon the hike and drive farther north in hopes of reaching drier terrain. It was a beautiful morning. We hiked back to Charlotte Lake backtracking our route from two days earlier most of the way. The last time I was at Charlotte Lake was October 1975. My friend Larry Bellas was manning the Charlotte Lake Ranger Station and I was hiking with my friend Larry Lewis. After 37 years it all seemed different than I remembered it. The mountains had not changed. I had changed. We found a nice camping spot 0.7 miles from the JMT. By 1:45pm it was raining hard. (7.5 miles in 4.5 hours.)

8/15. Today we hiked back to Kearsarge Lakes. (3.6 mi. 2 hrs.) It looks as though the weather is changing back to dry days and I regretted cutting the hike short. There were still clouds but less than the last five days. We spent a nice afternoon. I hiked to the highest Kearsarge lake and washed up. Basil fished. There was rain today although it was stormy to the south.

8/16. We had an uneventful hike over Kearsarge Pass and out to the trailhead. We headed to Bishop for a shower, motel and dinner. The next day we moved on to Mammoth where we found dry weather and lots of hiking options.