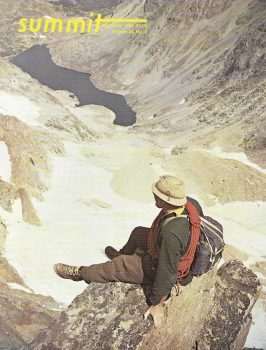 The Bighorn Crags are a vertical world composed of pure granite. Located in Central Idaho (west of the small town of Salmon), this small mountain range is an intricate part of the immense Salmon River Mountain system which is only a part of the much larger Idaho Batholith formation. The Crags have gained notoriety because of their classic granite architecture and high concentration of mountain lakes.

The range is roughly 20 miles long and up to 10 miles wide. Along its entire sweep, the range stands above the surrounding mountains by about 1,000 vertical feet. The Idaho Batholith forms the core of Central Idaho. This massive granite intrusion covers over 14,000 square miles extending nearly 300 miles from north to south and reaching up to 100 miles in width. The Bitterroot, Boise, Clearwater and Salmon River Mountains are the dominate ranges composing the majority of the Batholith’s area. Each of these sections of the Batholith has taken its identity from the major river systems draining its slopes. The Salmon River Mountains are the 2nd-largest of these 4 groups. The Bighorn Crags are the most rugged section of the Salmon River Mountains. 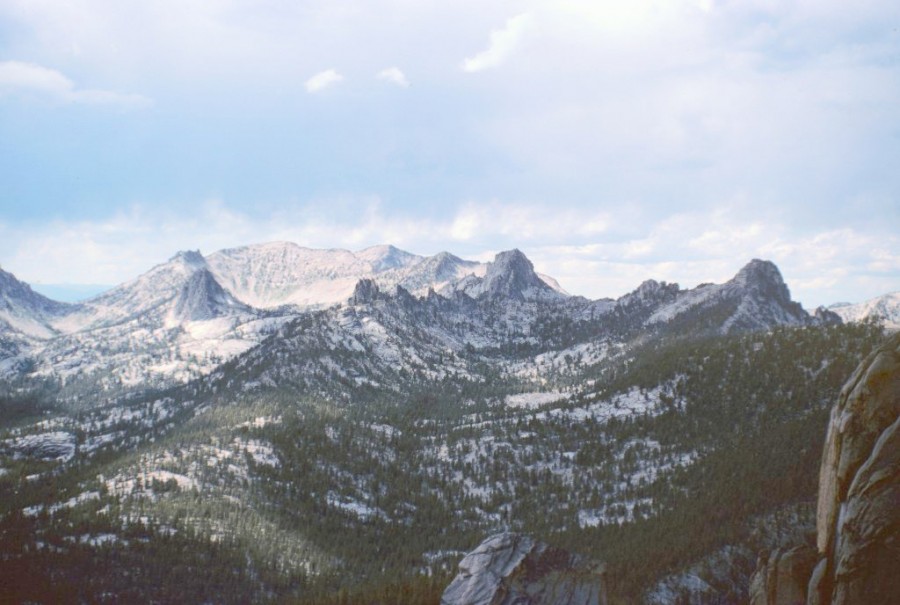 The Bighorn Crags as viewed from the summit of Cathedral Rock. 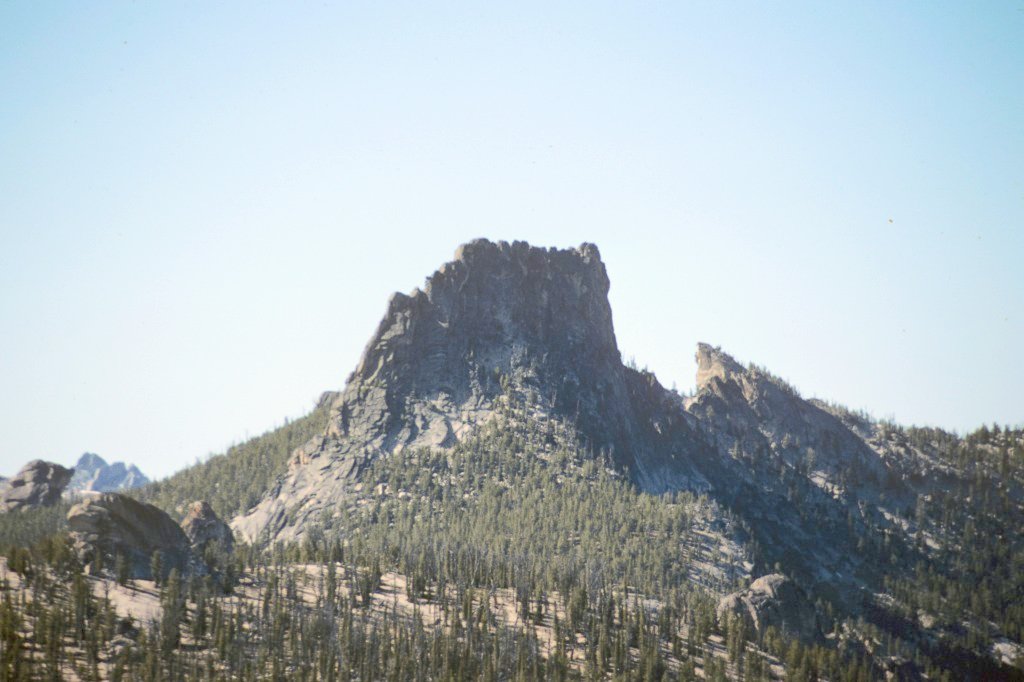 Although not an extremely high area, the batholith is a complex maze of mountains, rivers and canyons. The batholith reaches its highest elevations on its East Side, where it reaches heights of just over 10,000 feet. The Bighorn Crags are located along this East Edge of the batholith. The Bighorn Crags are pure Idaho Batholith, geologically speaking. They are an accumulation of granite which has been shaped by ice and water into a combination of peaks, domes and faces that are unequaled anywhere in Idaho. The granite is sharp, firm and clean. In short, the rock is perfect for rock climbing.

Large crystals provide minuscule but solid holds even on the steepest faces. Cracks vary from thread-size to large chimneys. Although there are opportunities for using special techniques like mantels, lie-backs and miscellaneous jams (from finger jams to squeeze chimneys), a climber will find that slab climbing or old-fashioned friction climbing prevails. Face climbing on the larger walls present the most challenging problems in the Crags. Unlimited bouldering opportunities await those who prefer to leave their climbing equipment back at the trailhead. Many of the area’s trails are hung on the sides of walls or run across the tops of ridges. 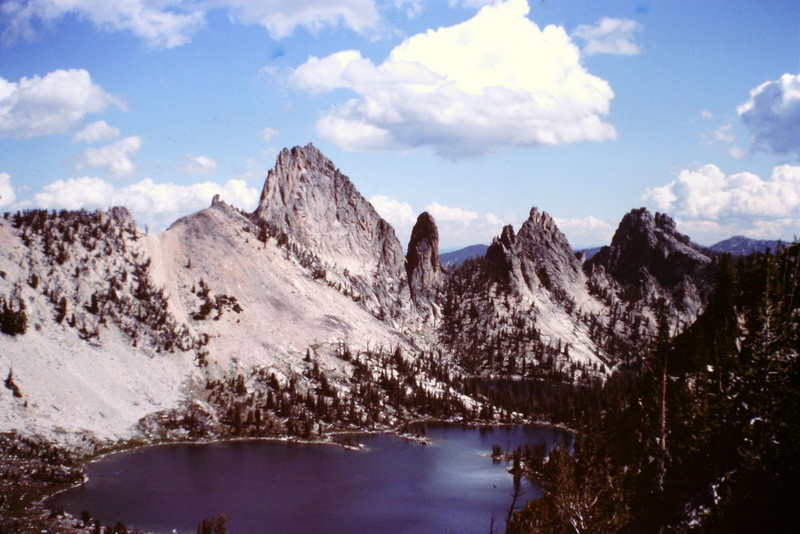 Knuckle Peak and Harbor Lake as viewed from the slopes of Ramskull Peak.

The rugged up-and-down character of the land makes trail construction and maintenance a difficult chore. The Forest Service has done an exemplary job of maintaining the high quality condition of the wilderness and the excellent condition of the trails in the Crags. There are a number of trails that have been constructed since the latest USGS quadrangles were published. The Forest Service keeps up-to-date information on hand at the Crags Campground trailhead. On the ground, trails are well-marked and easy to follow. 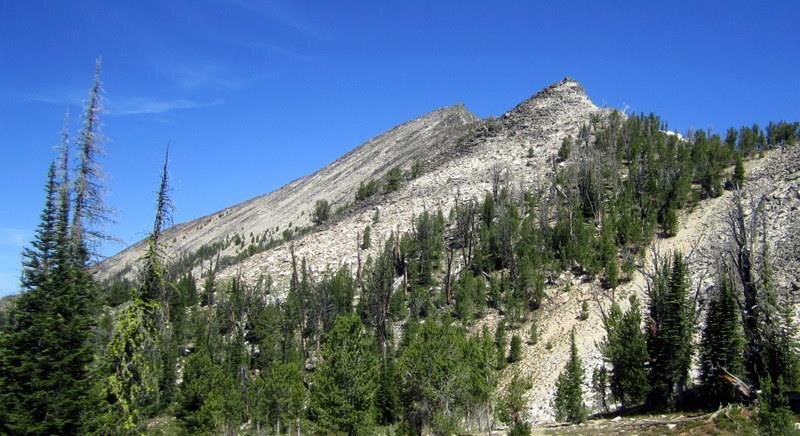 Approaching the beginning of the ridge. Deb Rose Photo

Climbers who come to the area should expect to find little in the way of company. Few climbers have tested the rock and the little conveniences (like bolts for rappelling) are rarely found. The weather can often keep the area closed until late July or early August as Winter snows are late to leave this country. There is no published record of Winter mountaineering in the Crags. However, at least a few adventuresome skiers have ventured into the area during Winter.

There are 3 main climbing areas within the Bighorn Crags. These are the Cathedral Rock area, Fishfin Ridge and the main summits of the range. The Cathedral Rock area starts 2 miles from Crags Campground and is located along the main ridge trail leading into central part of the Crags. This is an area of domes and spires which occupy the ridge top for nearly 2 miles until the ridge reaches the base of Cathedral Rock. The rock formations resemble tombstones and can be best viewed as the Cathedral’s cemetery. Climbing in this area is limited to 1- and 2-pitch routes in almost any degree of difficulty. Cathedral Rock itself is at 9,400 feet. This peak is located above namesake Cathedral Lake and presents an impressive collection of granite cliffs and ledges. There are a wide variety of lines leading up the rock, most of which have yet to be attempted.

Fishfin Ridge reaches to 9,700 feet and is perhaps the most impressive of the Crags features. Only difficult rock climbing will bring a climber to the summit of the ridge (Knuckle Peak) or one of its many spires. The top is a jumble of small jagged spires and blocks. On its West Side, the main section of the ridge presents an 800-foot face to Wilson Lake. The face is a conglomeration of slabs which are smooth and without any major cracks. There are a wide variety of overhanging obstacles to block many of the otherwise climbable routes to the top. From the north near Birdbill Lake, the ridge is equally impressive as it is an additional 300 vertical feet higher from top to bottom.

There are 4 major spires associated with the Fishfin formation. The most impressive of these is the first spire southeast of the main formation (Rusty Nail). Unnamed, it does show up on the USGS quad. From Wilson Lake, the spire presents a maze of cracks which cut the orange-white granite in mostly vertical runs. A large open book faces directly south. The Northeast Face of the spire is ﬂat and very steep. There are few cracks on this face.

The third area of interest in climbers are the metamorphic summits. These larger peaks can all be reached by non-technical routes and are composed of broken rock walls and talus. Mount McGuire (10,142 feet) is the highest peak in the Bighorn Crags. The double summit can he climbed by a variety of Class 3 routes. Aggipah Mountain and Wilson Mountain are 2 other likable summits which call out to climbers. The majority of the peaks in the range are unnamed but beckoning. 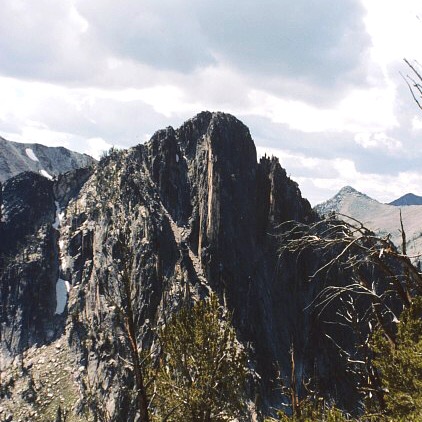 The forest extends nearly to the highest summits in places where soil has accumulated. The entire area is alpine in nature only because the bare granite is such an unpleasant environment for trees. Although this is a pseudo-alpine environment, it has a striking beauty all its own. During the Summer, the alpine fir and white bark pine are joined by a variety of wildﬂowers which sprinkle the slopes growing almost everywhere. Paint- brush, buttercups, wild onion, penstemon and fragile mountain heather are but a few of the flowers present. Wildlife in the Crags area is abundant. Bighorn sheep are present along with mountain goats. Black bears are around but are seldom seen. A number of smaller mammals are sure to be spotted along the trails as can be a number of birds including Clarks Nutcrackers in the lower forest.

The entire Bighorn Crags area is under the jurisdiction of the Salmon National Forest through its Cobalt Ranger District and is part of the 2.2 million acre Frank Church River of No Return Wilderness. Access to the range is from Crags Campground, which can be reached via dirt road from either Salmon or Challis. Crags Campground is a difficult location to reach because it is at the end of 40 miles of primitive dirt roads. Even so, low-slung passenger cars will often be found at the trailhead. Additional entry points are from the Middle Fork of the Salmon River via the Waterfall Creek Trail or from the Panther Creek Road via either Clear Creek or Garden Creek. 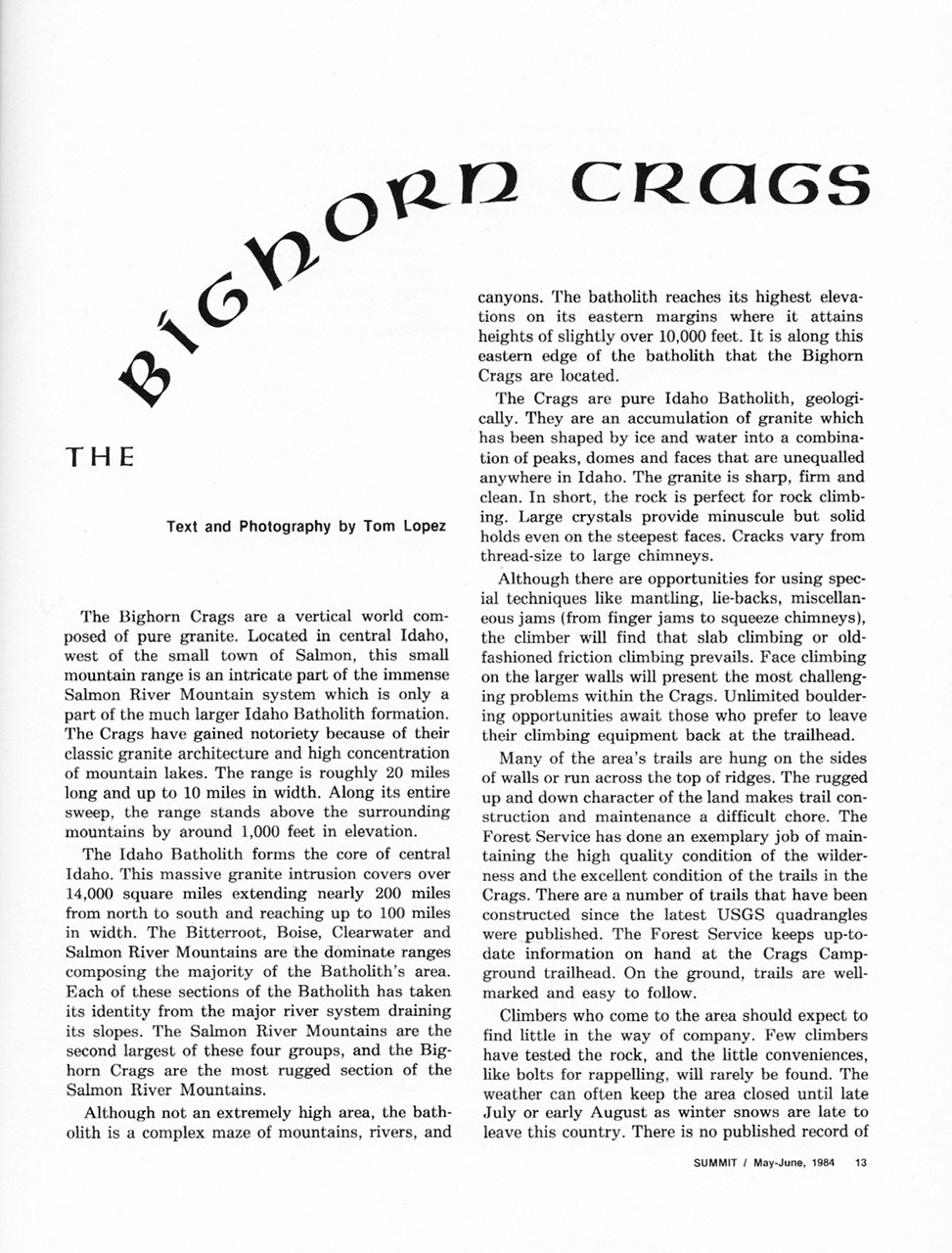 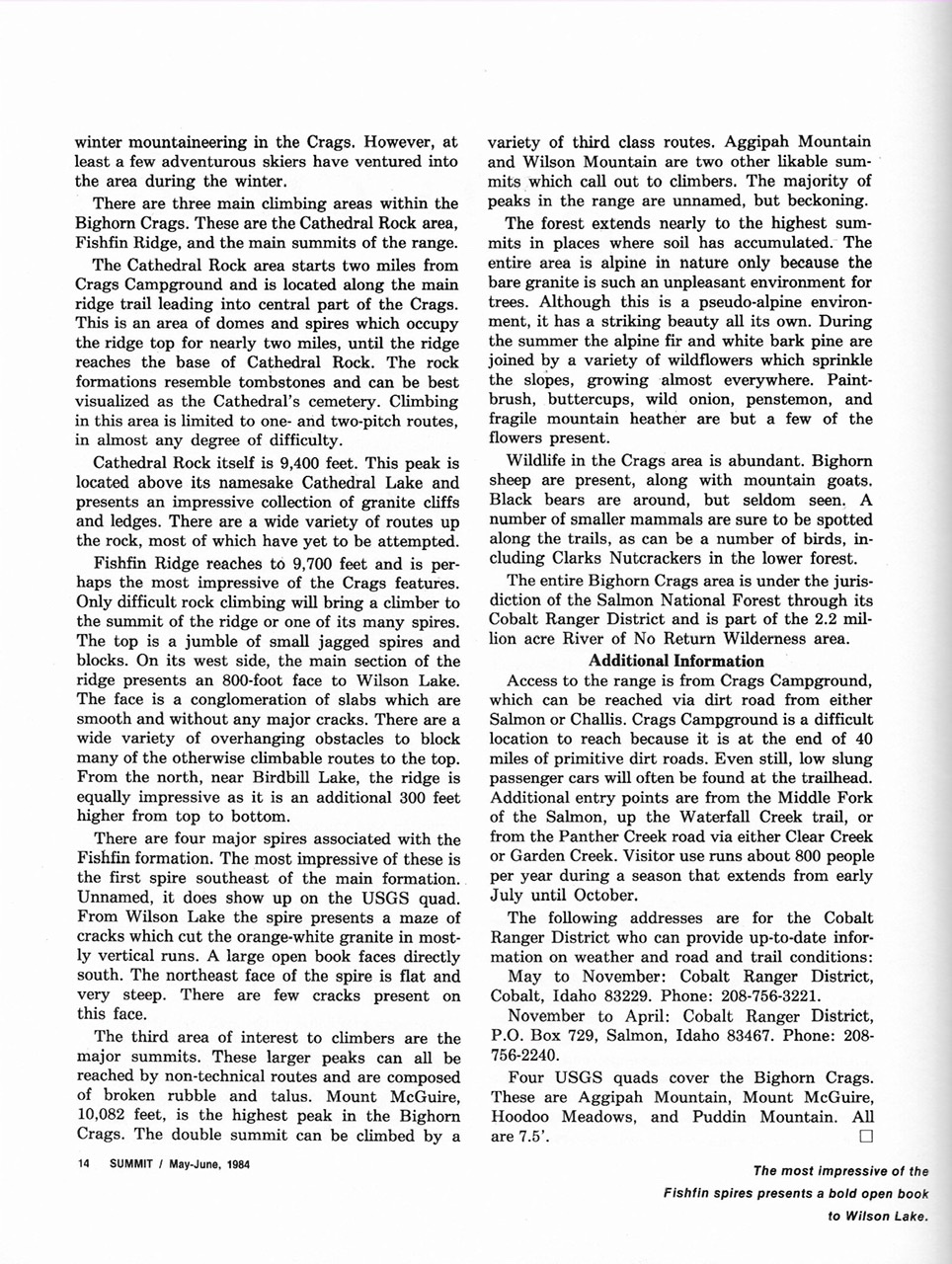