Climbing and access information for this peak is on Pages 124-125 of the book.

Knuckle Peak, the most impressive feature of the Bighorn Crags, is the highest point on Fishfin Ridge. The peak was first climbed by Lincoln Hales and Pete Shoening in 1955. First a couple of photos and then 2 routes not included in the book. USGS Mount McGuire 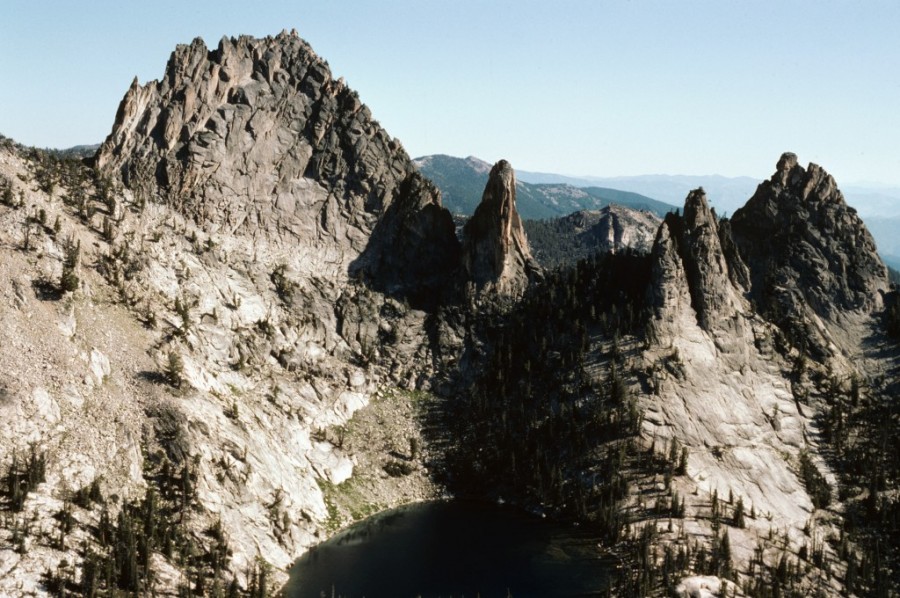 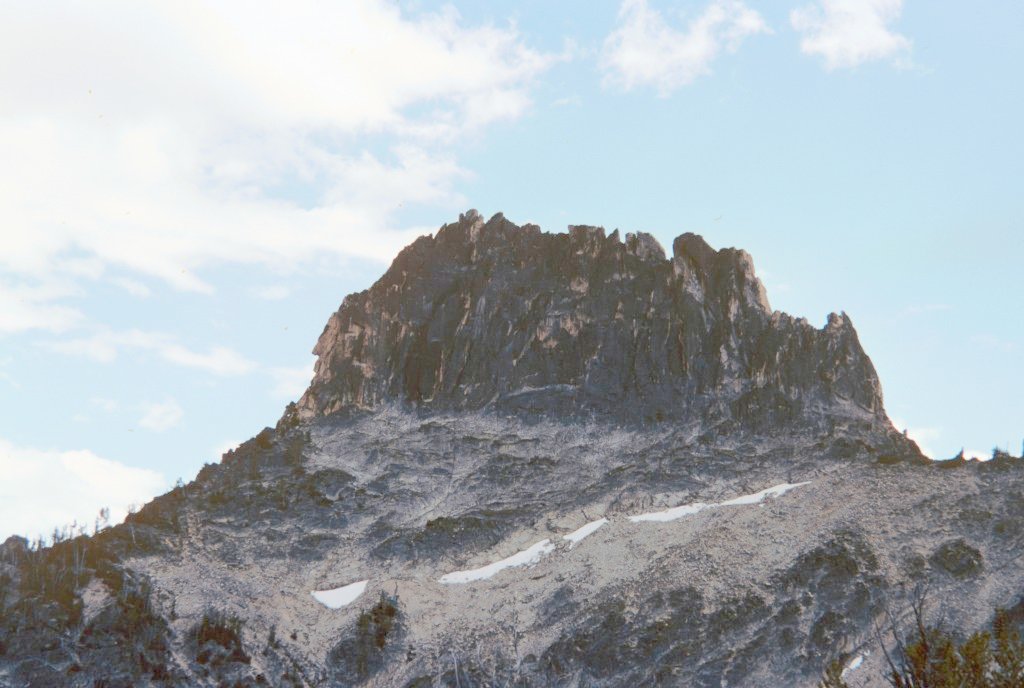 The North Face of Knuckle Peak was first climbed by Gary Gettman and Jim Manning in 1974. See Gary’s route description below.

Pocatello attorney Jim Manning and I climbed during Labor Day weekend in 1974. We camped at Wilson Lake and hiked to the saddle west of the peak. From there, we traversed east along the base of the North Face on Class 3 slabs and ledges to a point directly below a prominent chimney that runs all the way to the summit ridge. 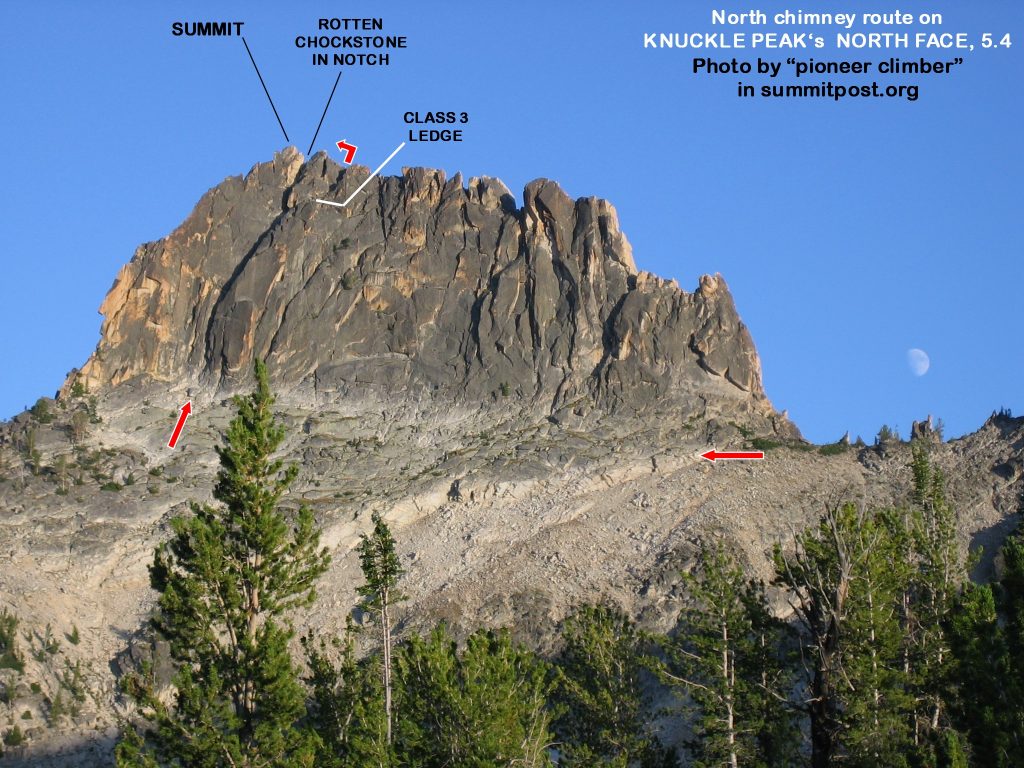 Gary Gettman added the commentary to the photo by “pioneer climber.”

To reach the bottom of the chimney, Jim led a short crux pitch consisting of 5.4 and 5.5 flakes and cracks. The chimney itself involves several Class 4 and easy Class 5 pitches that widen out into a deep notch at the summit ridge. The notch is straddled by a huge, rotten chockstone coated with granite ball-bearings. A short distance below the chockstone is a Class 3 ledge that exits the chimney and runs west to the summit ridge.

From there, it is an easy scramble east along the ridge crest and across the top of the chockstone to the summit. We down-climbed and rappelled the same route. In 1974, there was a small summit register (I believe a 35mm film can), but no mention of this route. This chimney appeared at the time to be the easiest and most direct route to the summit and would be a good descent route for more challenging climbs on the North Face.

This exciting new route was put up by Kevin Caudill and Brian Barnett on July 23, 2001. It is the first new route I have heard about on Knuckle Peak in years. Kevin led the climb and he reports the rock quality “was sketchy at times.” Kevin’s route description and more photos are found below. 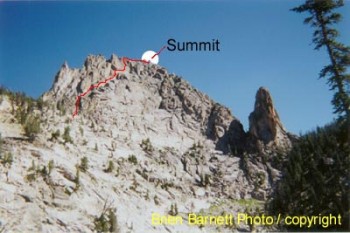 Access the route from Harbor Lake. The most important part of the route is getting to the ledge system that veers to the right/east on the photograph. The long first pitch is rated 5.6 and crosses blocky rock to an obvious ledge. The route begins roughly 30 yards right of the largest pine tree at the base of the wall. The pitch climbs to the ledge in one full rope length.

Once on the first ledge, you follow a series of corners up and to your right to the summit ridge in 4 or 5 pitches. These pitches must be shorter (1/2 to 3/4 rope lengths) than a full rope length due to rope drag. There are several options of routes between the first ledge and the summit ridge. The second pitch is short and 5.7 with few hard moves. The third pitch is 5.7, A1 with a short but very hard section. The fourth pitch is also short and 5.7 with some hard sequences. The fifth pitch is a long sustained 5.6 climb which ends on the knife-edged summit ridge.

A word of caution From Kevin: I climbed the East Ridge out of the notch between Rusty Nail and Knuckle Peak in 1997. It was my first gear lead and rappel. We rappelled directly from the summit block down the massive face above Wilson Lake. Their were very few rappelling horns and we rappelled off small trees 1 inch in diameter. The full face was 9 single rope rappels and 3 of the anchors were hair-raising.

I count myself lucky to be alive. I don’t think I would have lived without Divine intervention. We rappelled half of the face in the dark!!!! A safer route down includes traversing west back past the end of the route and shortening the length of the face. There is a good starting point 70 meters from the summit block. 3 double-rope rappels with good protection is a lot more enjoyable than the former struggle. 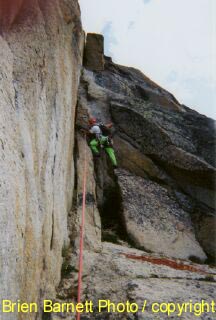 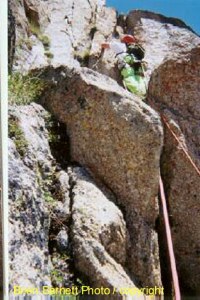 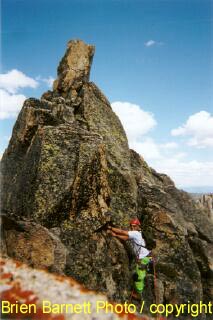 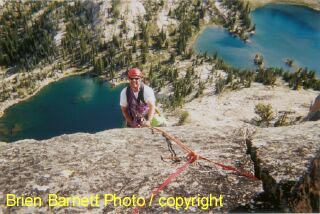 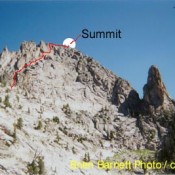 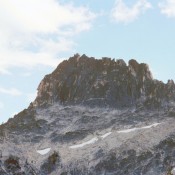