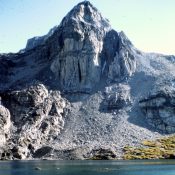 In 1976, after returning from the Peace Corps in Costa Rica, I worked for 2 months as a volunteer for Sequoia and Kings Canyon National Parks. The monetary rewards were limited to $3 per day but the work assignments were priceless. I was basically allowed to backpack through the park collecting data regarding spawning potential of lakes and checking backcountry permits for accuracy. I wore a uniform but had no law enforcement duties. It was a sweet deal.

Working as a volunteer exceeded my expectations in every respect. For this trip, I was flown in a Cessna from Three Rivers, California to Bishop. This low-level flight gave me an incredible opportunity to study the terrain. In Bishop, I was picked up by a ranger. He drove me to the North Lake trailhead for the start of my journey. I was free to set my own itinerary and take as much time as I wanted. So I took enough food for 10 days. During the 1970s, I did not carry a tent and relied on historically-good Sierra Summer weather and a tarp.

North Lake is located west of Bishop in the Inyo National Forest. The 1st day, I hiked from the trailhead to Piute Lake (11,432 feet). The area around Piute Pass is designated wilderness but is not located within the National Park. It is nevertheless every bit as spectacular. Gigantic Humphrey Basin sits north of Piute Pass and is large enough to swallow 100 hikers. I could only WISH to explore it as the one stipulation on my position was that I hiked INSIDE the National Park Boundaries. 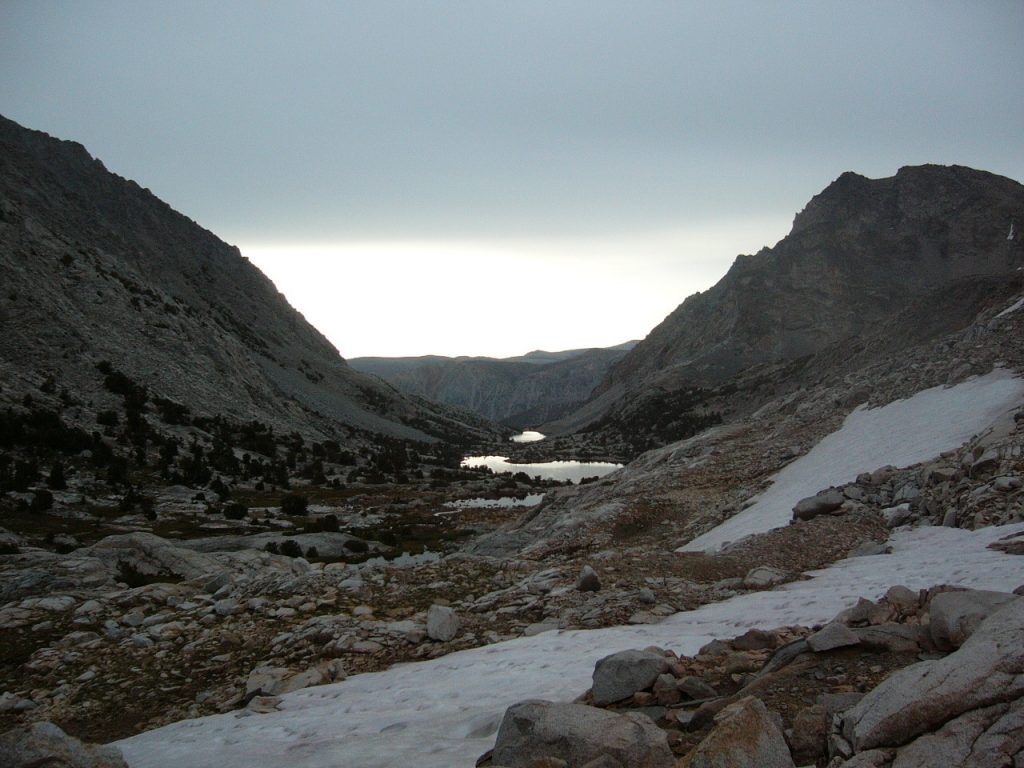 Looking back to Piute Lake.

On my 2nd day out, I crossed Piute Pass and then hiked down to the San Joaquin River where I joined the John Muir Trail (JMT). I took the JMT south, entering Kings Canyon National Park. I spent my 2nd night camped at the junction of Goddard Creek and Evolution Creek. I covered 13 miles that day. My hike covered a lot of vegetation zones, ranging from alpine tundra to the warm confines of the San Joaquin and then back up into pine forests at my camp. 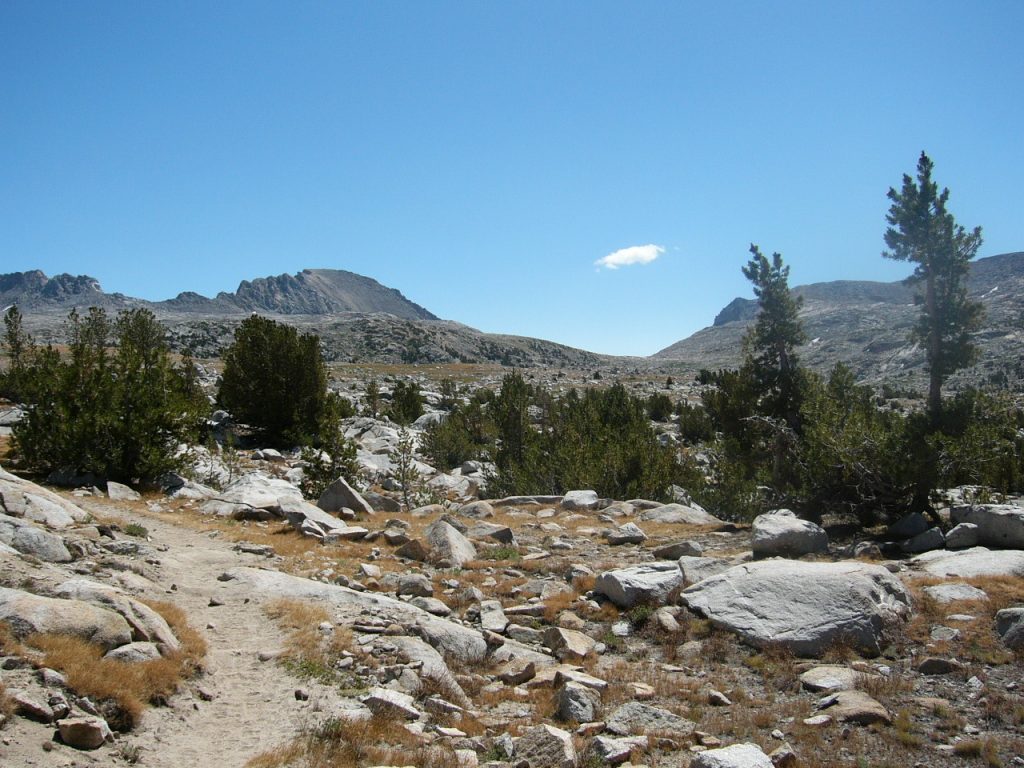 There is a lot of area to explore around Piute Pass.

On the 3rd day, I hiked along the JMT to McClure Meadows, covering 7.5 miles and gaining roughly 1,200 feet. This section of trail is quintessential Sierra Canyon Country. The trail stays near Evolution Creek for the entire distance, passing waterfalls and rapids the entire distance.

As I mentioned, one of my tasks was to check the wilderness permits of the hikers I met for accuracy. The permit system in the Sierra Nevada parks and wilderness areas has divided the entire area into zones. Hikers are asked to specify how many nights they will spend in each zone. I was asked to check the permits to see if the permit holders were where they predicted they would be on the day in question. If the information was accurate, the managers could use it to determine where to look for lost hikers and to determine which areas might be overused. The permit system was only in its 3rd year in 1976. I found that the hikers I encountered had, for the most part, accurately predicted where they would be on any given day and that those who had not, were usually only off by a day or two. 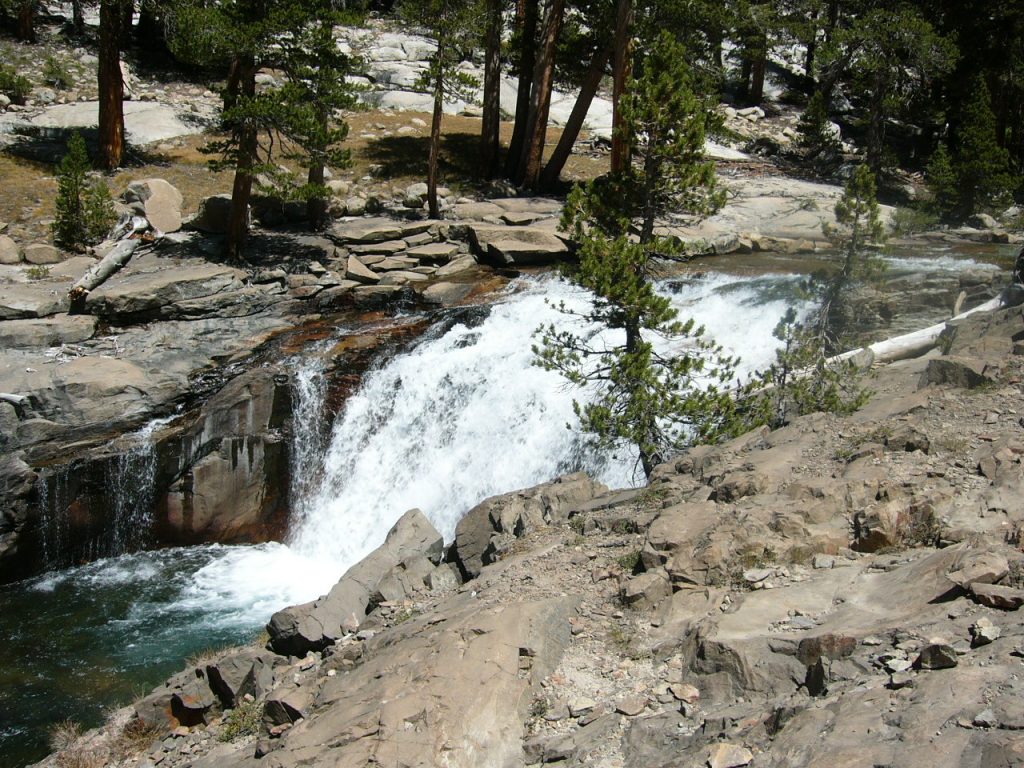 From McClure Meadows, I hiked past massive Evolution Lake to Sapphire Lake (10,966 feet) on Day 4. This was only a 6-mile walk and gave me time to interview hikers. Trust me–Evolution Basin is not a place that you want to rush through. It is a special place which clearly fits John Muir’s “Range of Light” moniker.

Almost every hiker I talked to had experienced bear problems, mostly in Yosemite National Park. The Sierra bears were aggressive and it was almost impossible at some locations to stop them from raiding campers’ food supplies. In addition to issuing warnings, the Park Service tried to curb the bear menace in a couple of ways. First, at popular camping areas along the JMT, the Park Service strung cables high up above the ground which provided backpackers with an easy place to hang their food. The bears would climb on top of each other to get enough height to grab the food.

Second, solar-powered electric fence enclosures were installed. While this worked at first, the bears soon learned to simply crash through the fences, take the shock and pick up the food. Years later, the land mangers installed steel bear boxes at popular backcountry camping spots which were effective at deterring the bears. Later (and currently), backpackers were required to carry all their food in bear-proof canisters. The canisters have been very effective. In fact, according to the authorities, the bear problem has largely disappeared. 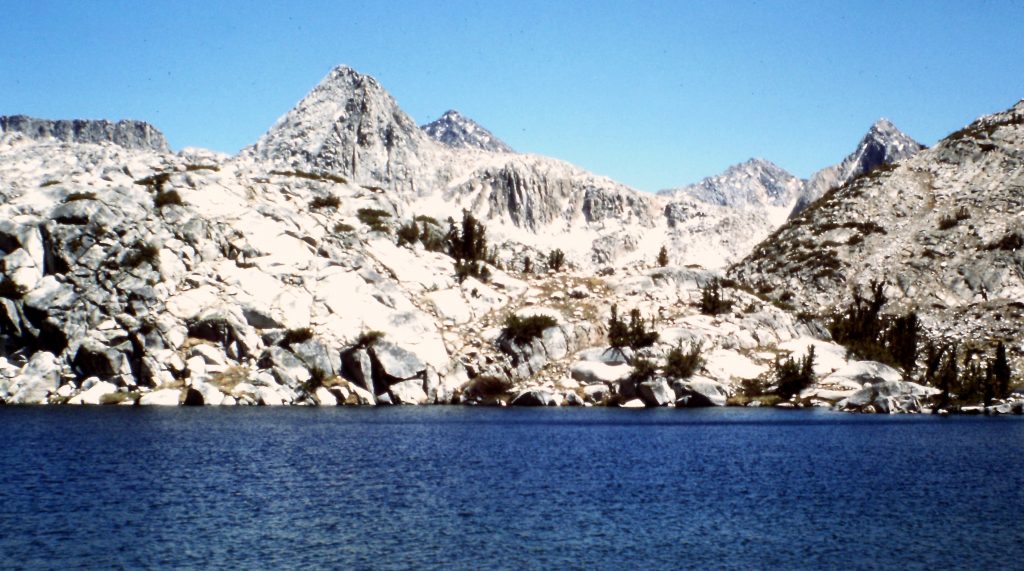 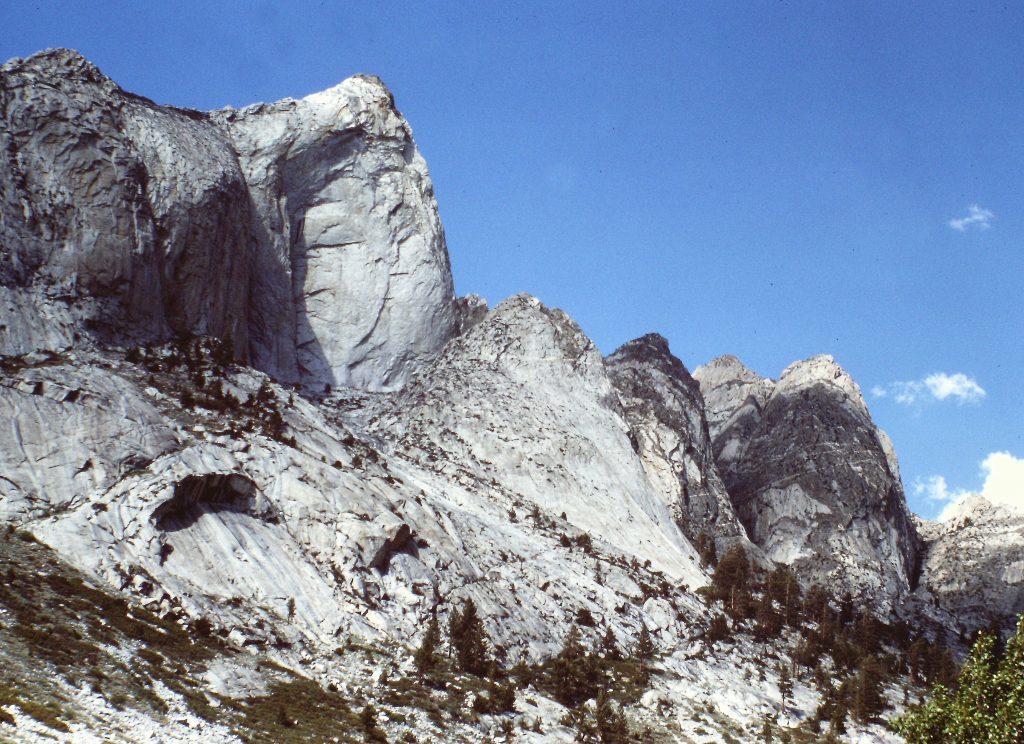 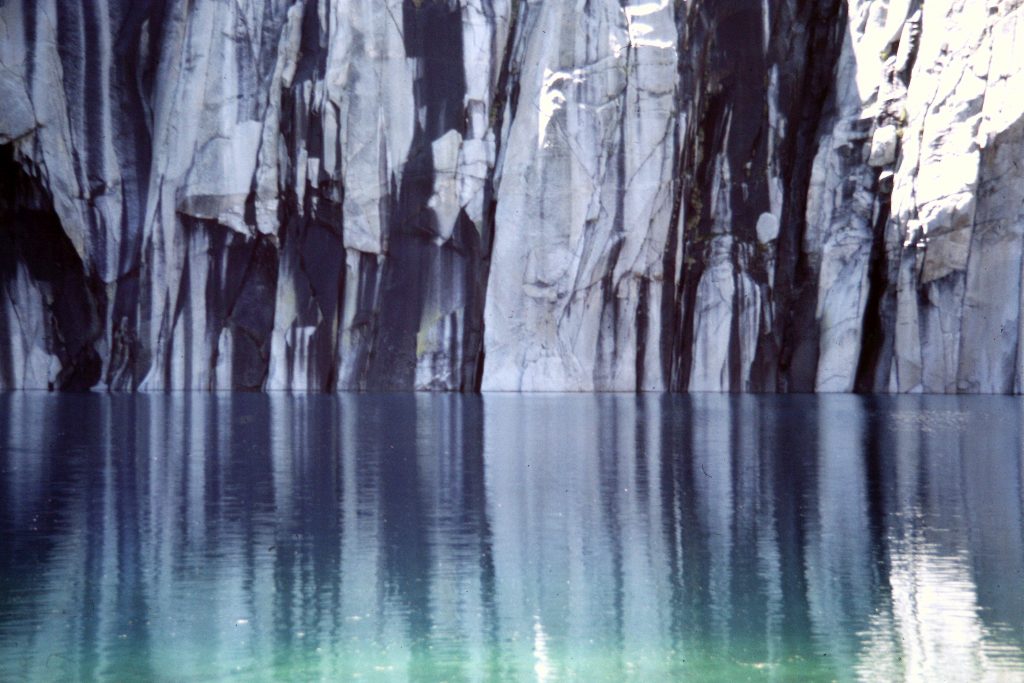 On my 5th day out, I hiked from Sapphire Lake over Muir Pass (12,000 feet) to the Le Conte Canyon Ranger Station (8,700 feet) in 13 long miles. The ranger was heading out on patrol and gave me the use of the cabin and his shower for the night. I felt so at home that I hung out at the Ranger Station the next day. 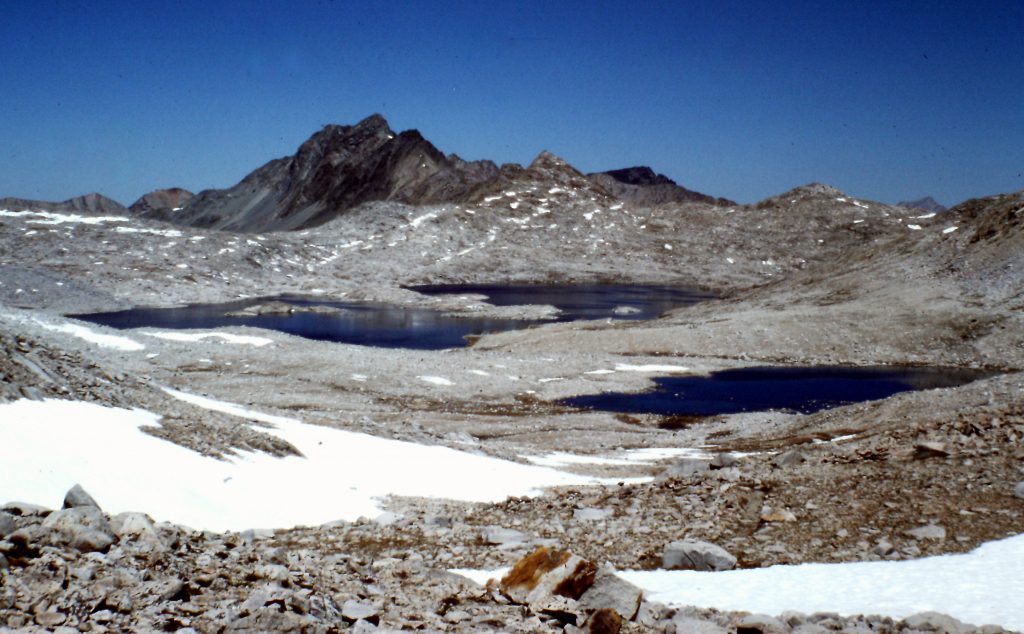 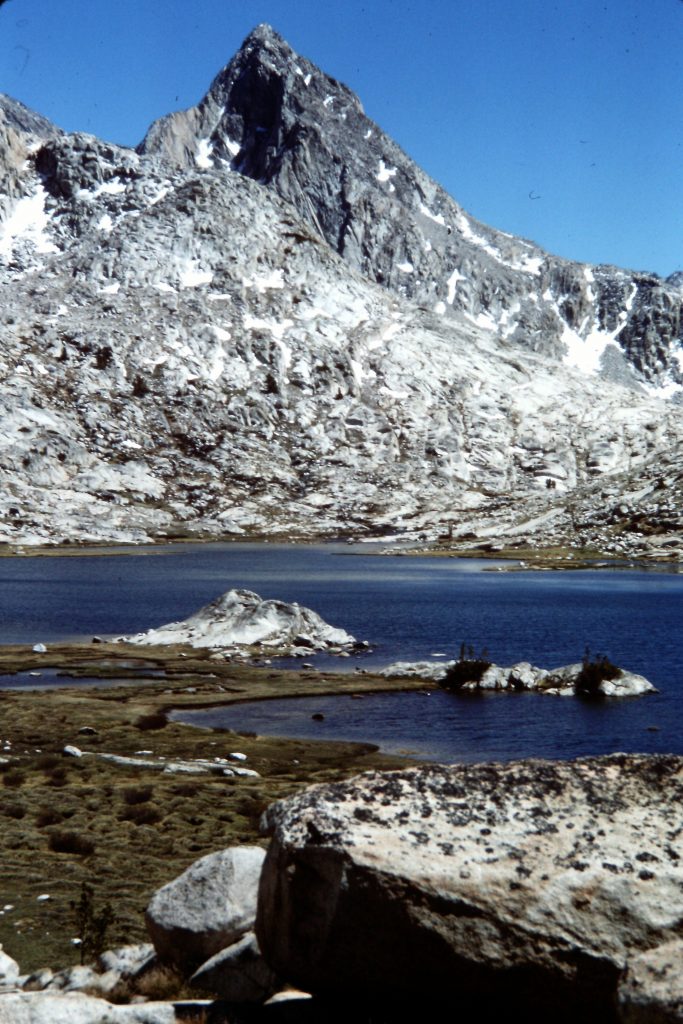 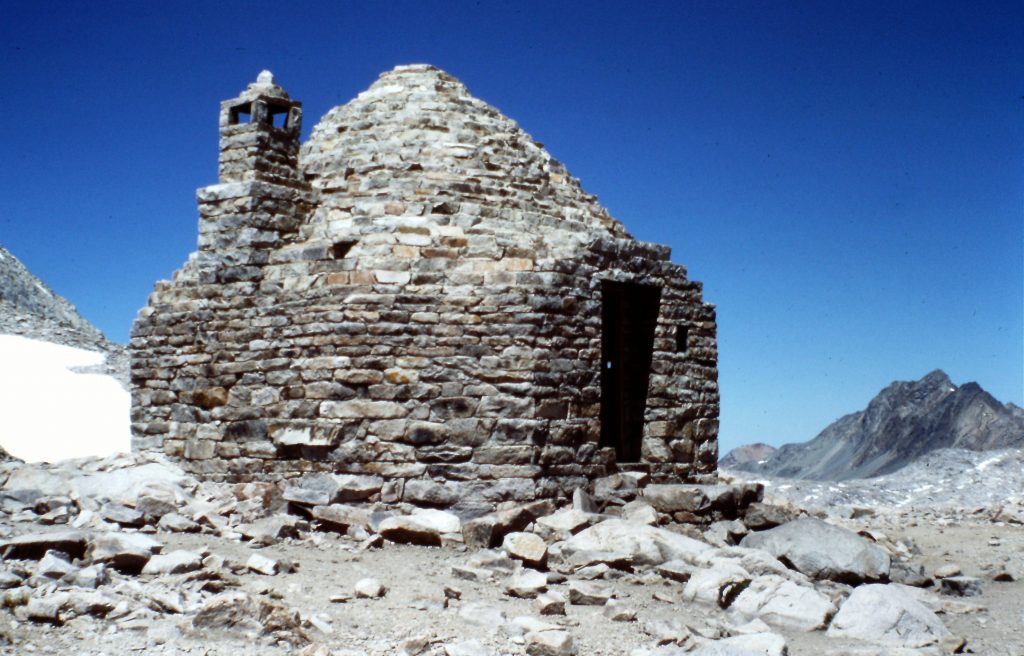 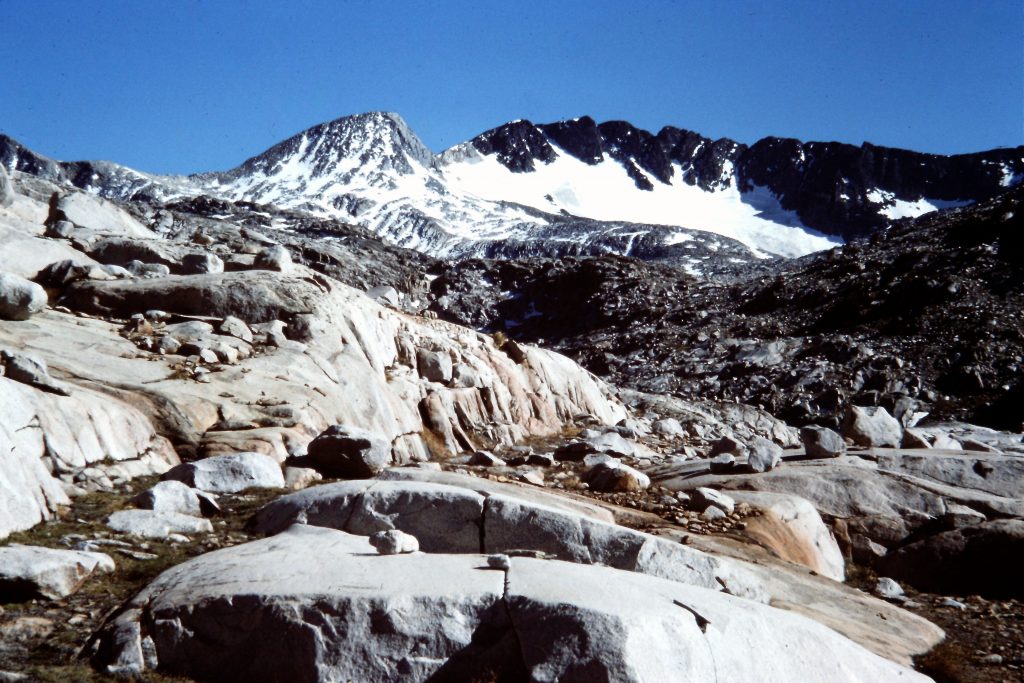 As much as I wanted to hang out at the Ranger Station, I got moving again on the 7th day and climbed up the JMT to Palisades Lake (10,613 feet). Palisades Canyon is an impressive canyon with plenty of glacially-polished rock (I had previously descended the canyon in 1975). It was another long day: 11 miles of hiking with significant elevation gain. 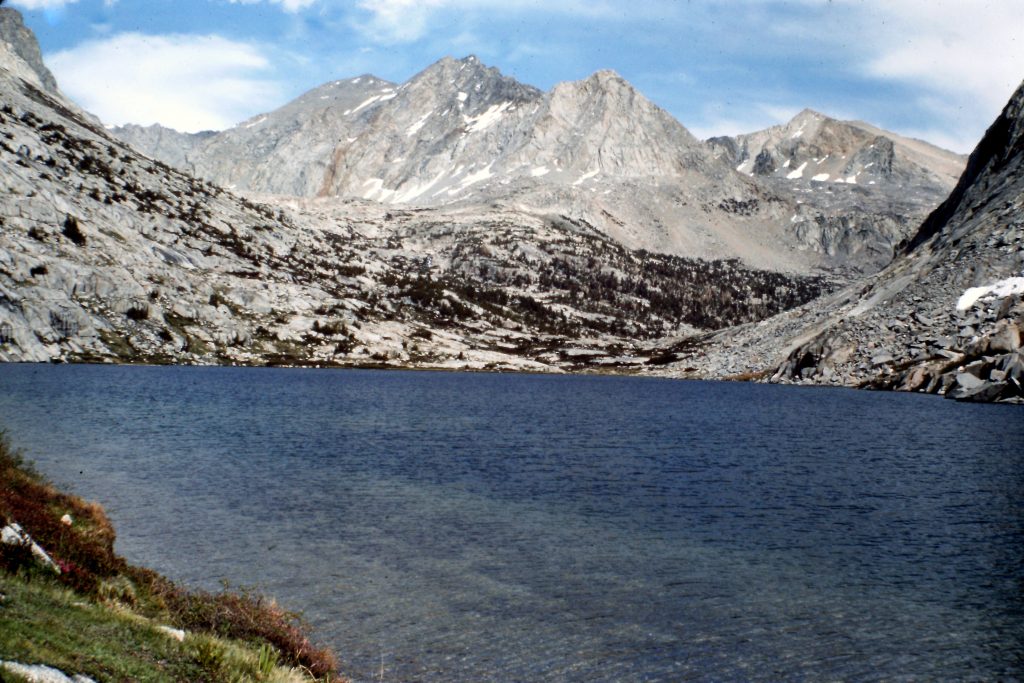 On the 8th day, I hiked from Palisades Lake over Mather Pass (12,200 feet) and then down to the South Fork Kings River. After lunch, I climbed out of the river canyon and then on to the location of the Bench Lake Ranger Station, which was being assembled by the backcountry Ranger. The ranger had been flown in to this new backcountry campsite about a week before. Boxes and lumber were strewn all around the camp. He had spent his first week digging a pit toilet and was now in the process of constructing his tent platform.

It was my view, at the time, that the best job in the world was being a backcountry ranger for Sequoia and Kings Canyon National Parks. These rangers were flown out to the camps, some of which were cabins and some of which were platform tents as soon as their assigned spot melted out. They stayed out all Summer and some of them stayed out into the Fall, even late Fall. All of their food was flown in and weight was not a consideration. Their normal duties involved patrolling the trails and generally being present if hikers needed aid. I never met one of them who was not a proverbial “happy camper.” Many of the people who secure these rare jobs come back year after year.

I spent my 9th day helping build the Station’s tent platform. On the 10th day, I was feeling frisky and ended up walking over 2 passes (Pinchot and Glen) and traveling 22 miles, which brought me to the Upper Paradise Valley, roughly 10 miles from my destination at Cedar Grove. I knew that the area was notorious for bear problems but I was tired after the long walk, so I used my backpack for a pillow and fell asleep. Sometime during the night, I awoke from a dead sleep and sat up. I did not know why I awoke but I shined my flashlight around the campsite and saw nothing. The next morning, I packed and walked down the trail about 25 yards where I ran into a guy whose camp had been raided by a bear in the middle of the night. His stuff was spread all over the place and he was quite shaken. After helping him put things in order, I gave him some food and walked out to Cedar Grove. I spent the night in the bunkhouse and was driven back to headquarters the next day. 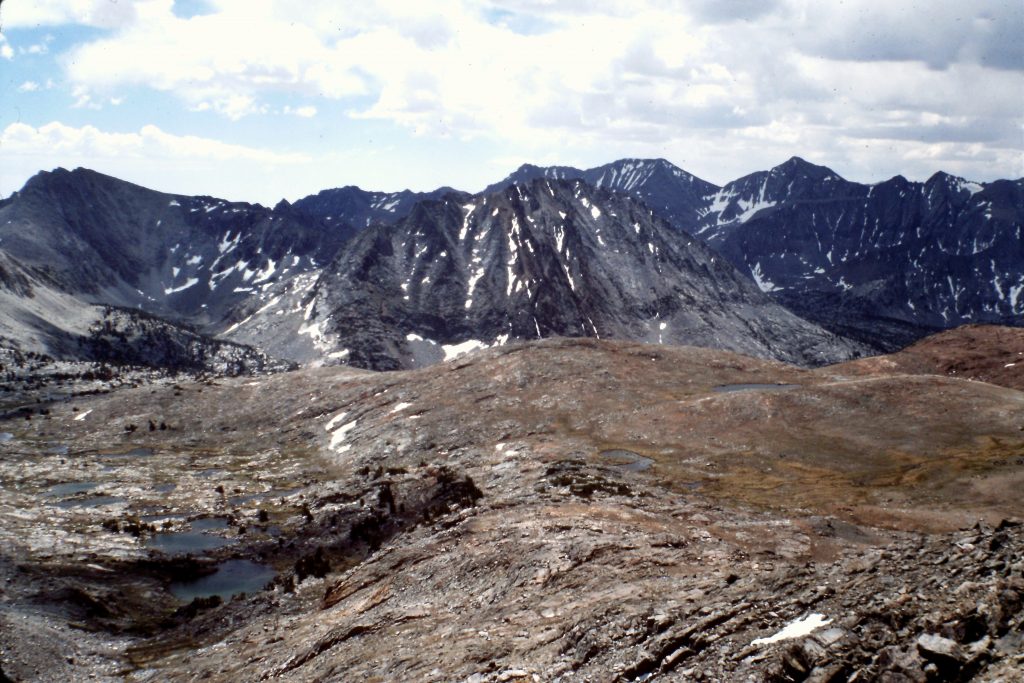 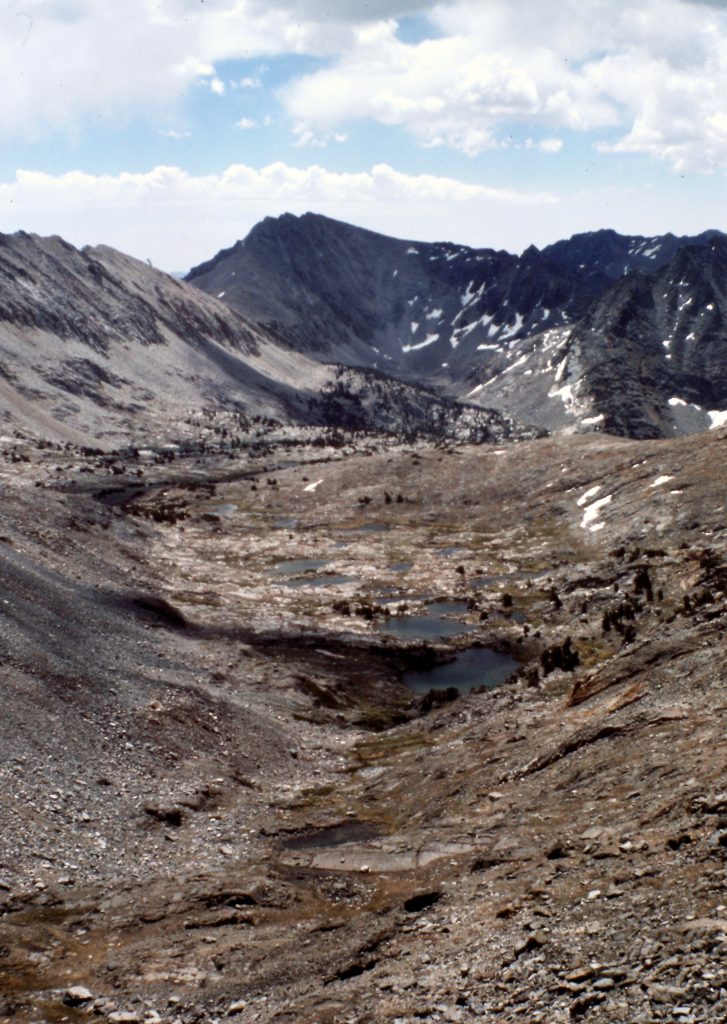 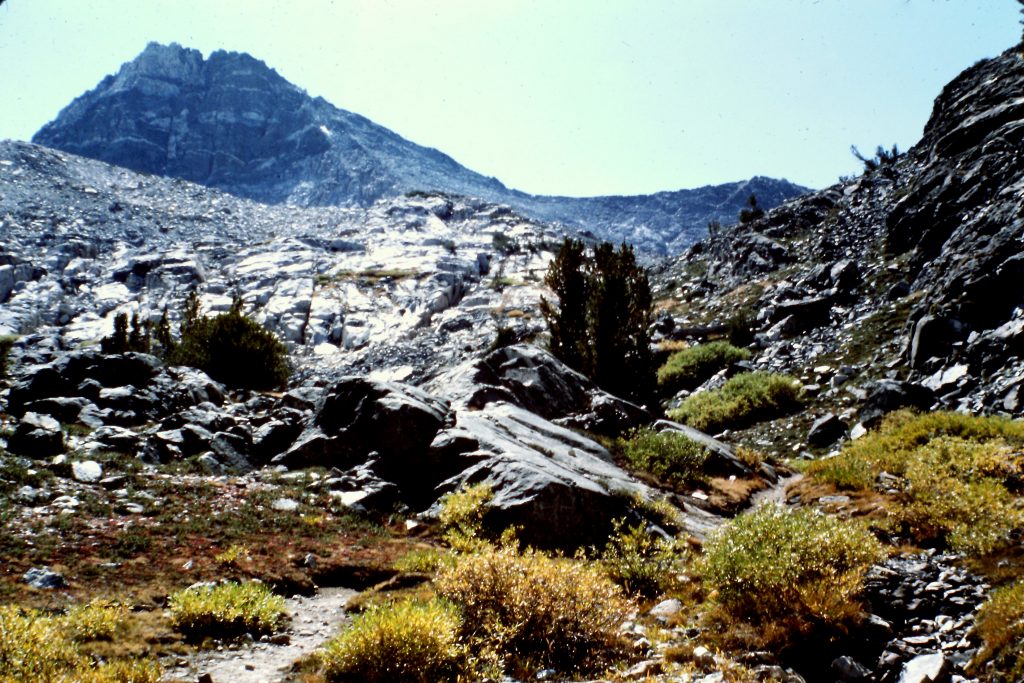 My trip covered 97 miles and crossed 5 passes above 12,000 feet. If you had to arrange a shuttle, this trip would be difficult logistically.

My second trip started at the Crescent Meadows Trailhead in the Giant Forest Area of Sequoia National Park which is at roughly 6,700 feet in elevation. The 1st day I hiked the High Sierra Trail to the Bearpaw Meadows Ranger Station at 7,700 feet. This was a pleasant, mostly-forested walk. The West Side of the Sierra Nevada rises gradually from the Central Valley and is much more convoluted than the East Side of the range where the John Muir Trail is located. The ranger put me up for the night in his A-frame cabin. 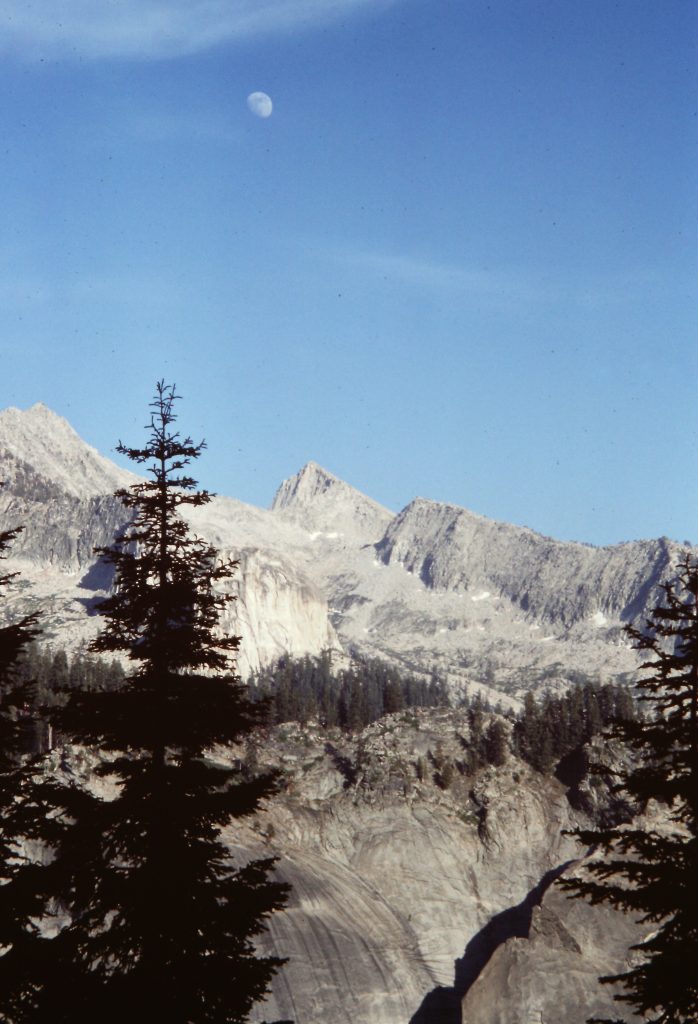 The Great Western Divide as viewed from Bearpaw Meadows.

On the 2nd day, I hiked only 5 miles to Hamilton Lake. The trail was busy and I spent a lot of the day interviewing hikers. That evening I was sitting in camp enjoying the alpen glow on the Great Western Divide when I noticed a bright light on Kaweah Gap. I thought, “Who would carry such a massive flashlight into the backcountry?” A few minutes later, it dawned on me that what I was seeing was Moon rising over the divide. It was a surreal experience for a few minutes. 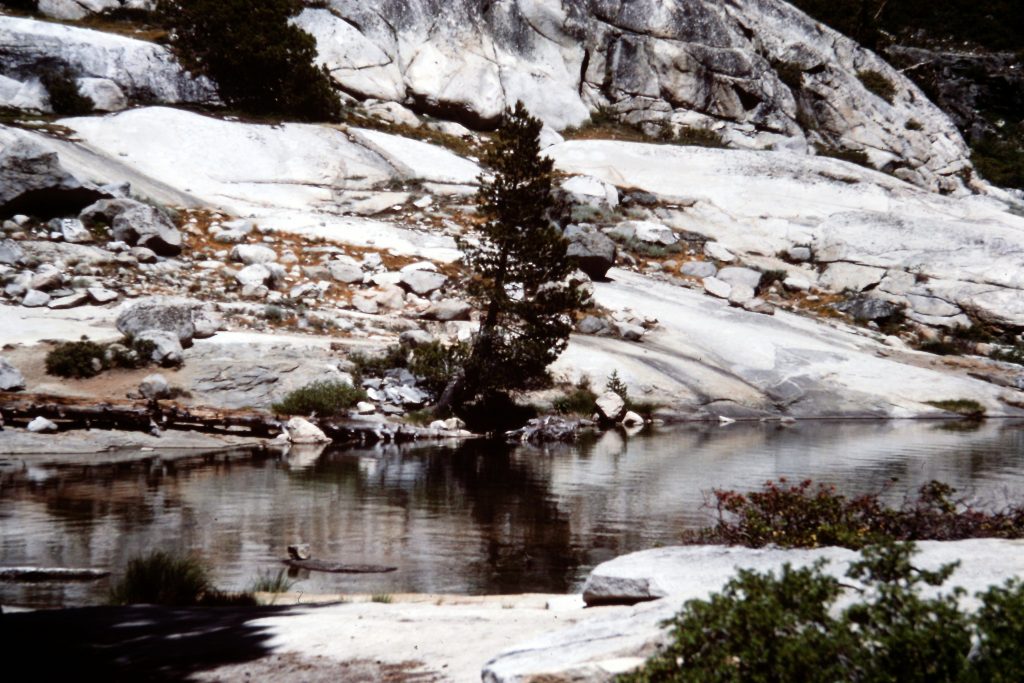 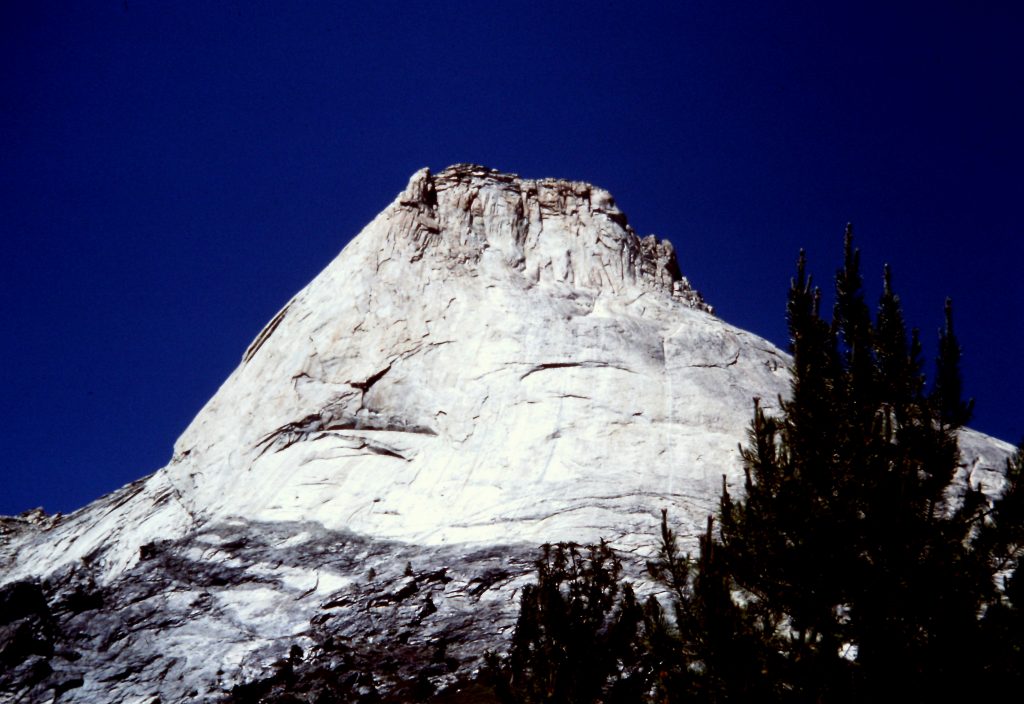 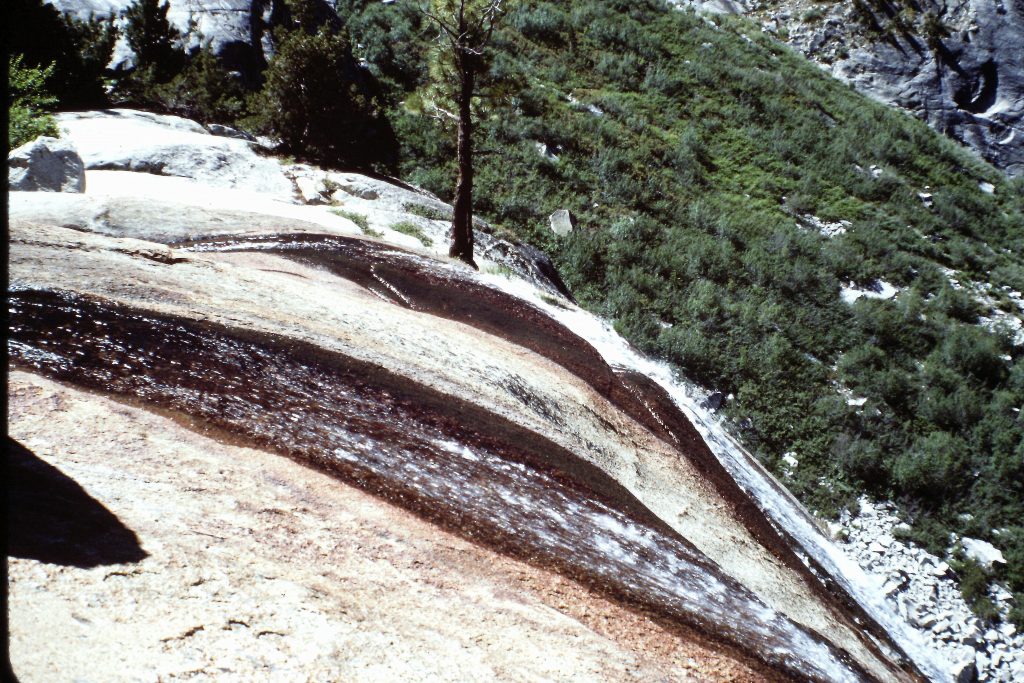 The outlet stream below Hamilton Lake. 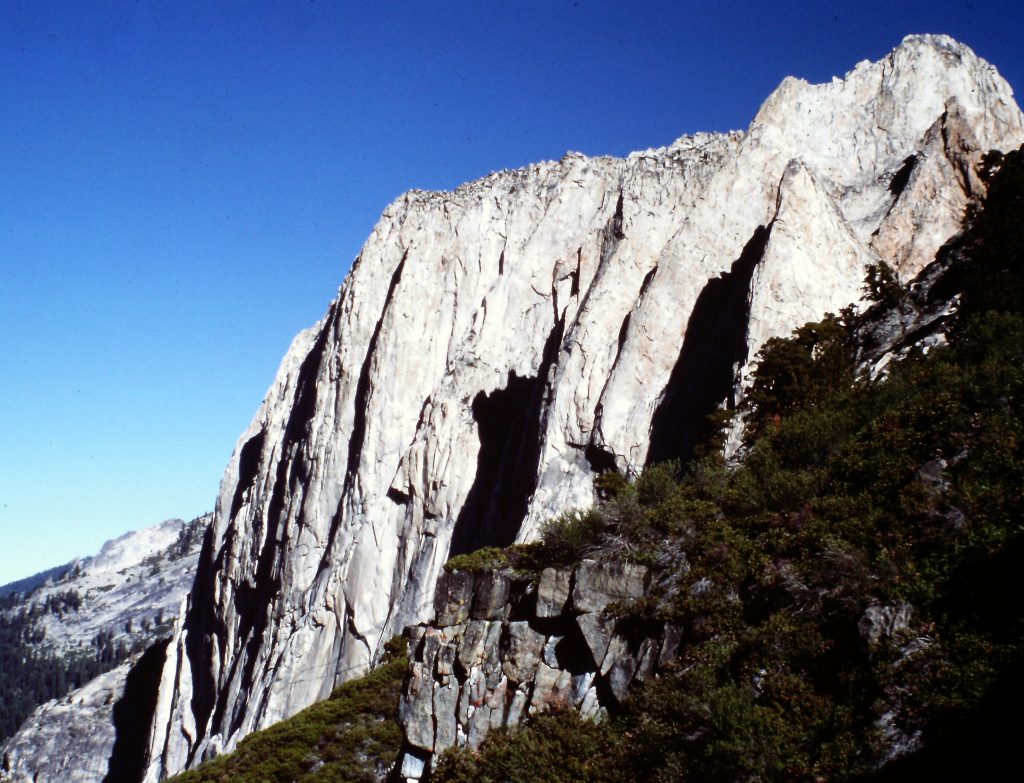 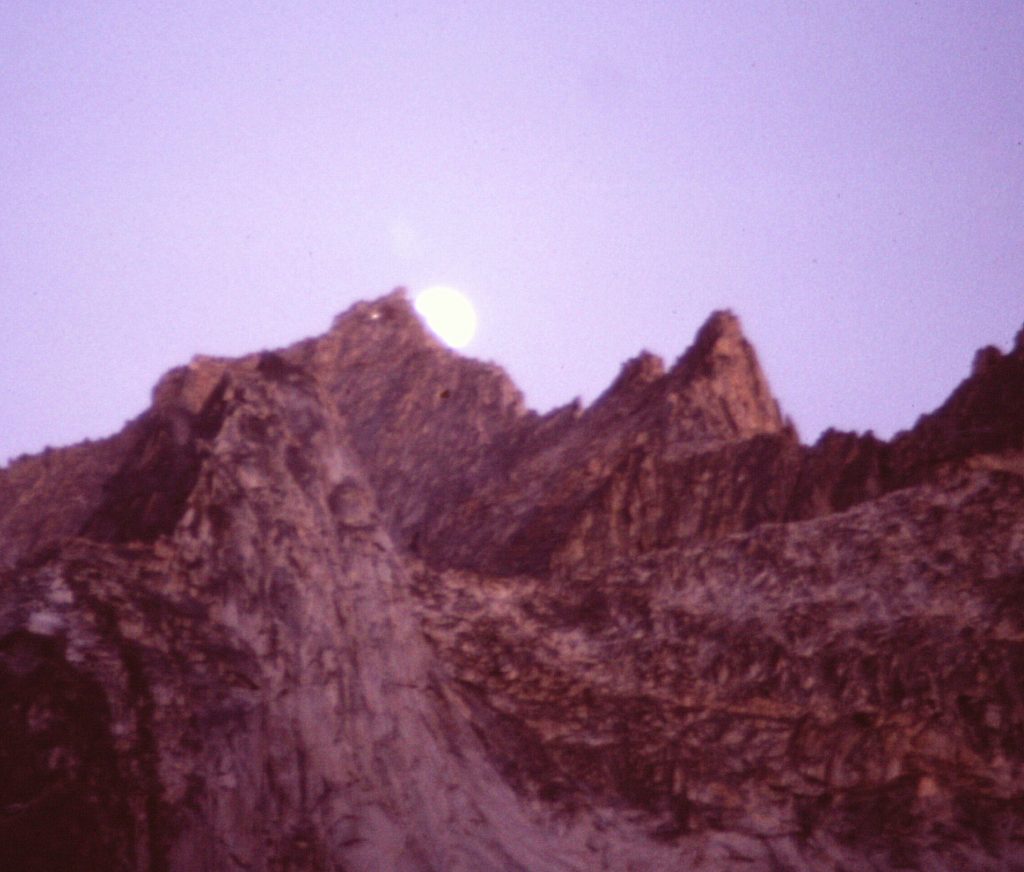 The Moon rising over Kaweah Gap.

On the 3rd day, I hiked over the Great Western Divide at Kaweah Gap (10,640 feet) and camped at the site of the old Big Arroyo Patrol Cabin. This was a 7-mile walk and I only met a few hikers all day. 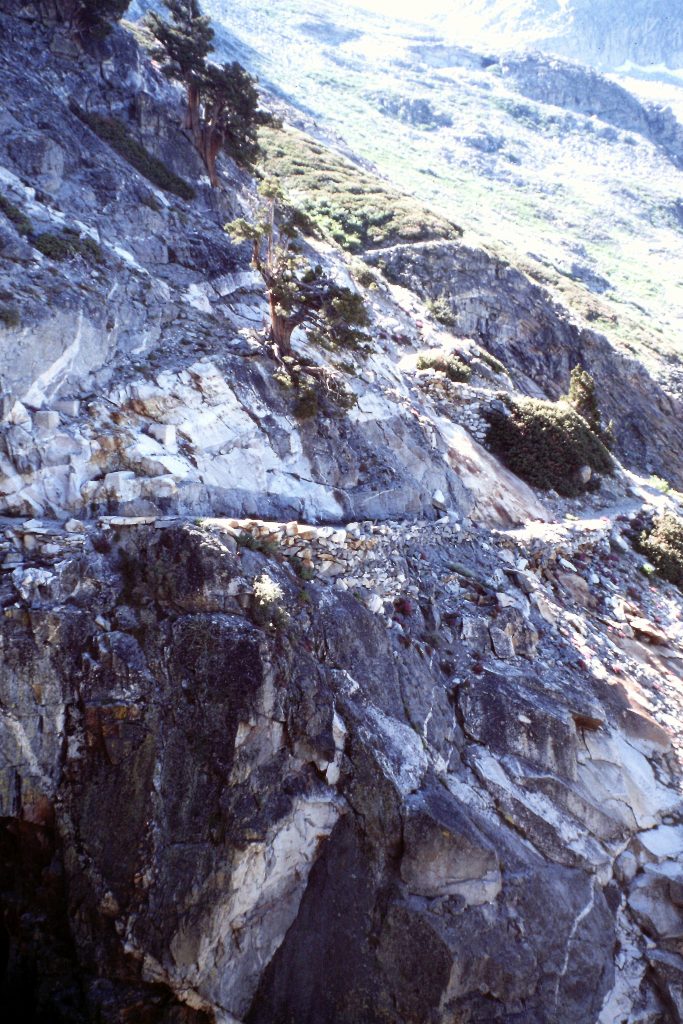 The trail leading to Kaweah Gap. 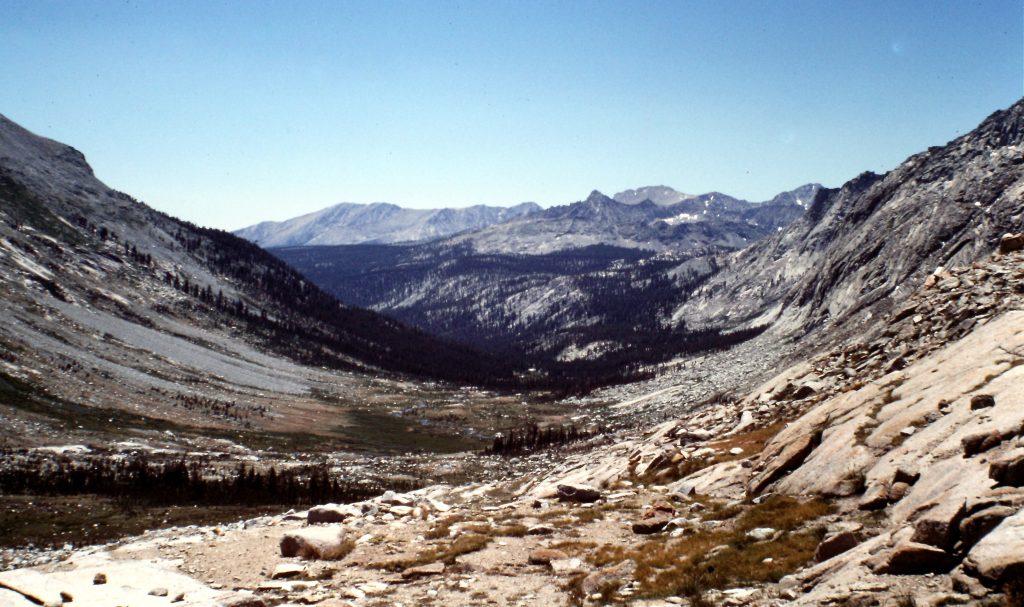 Looking south to the Big Arroyo. 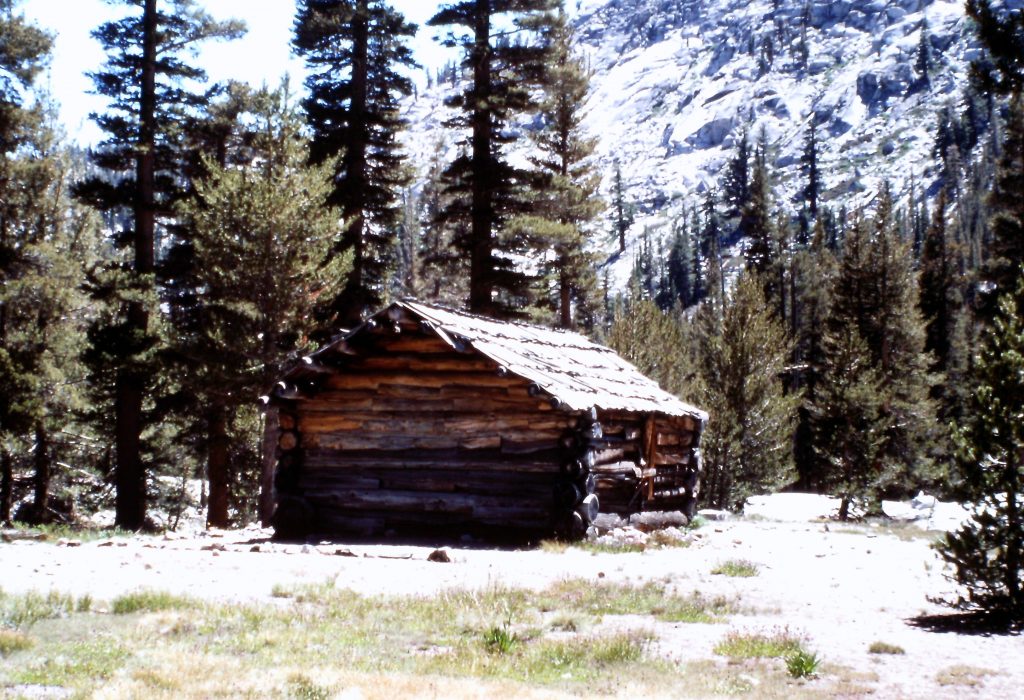 On the 4th day, I moved camp to Spring Lake, hiking past Big Five Lakes and crossing Big Five Col in 10 miles. The last portion of the hike from the Big Five Lakes Basin was on an unofficial trail that crossed a 11,145-foot pass and then dropped down to Spring Lake at 10,050 feet. 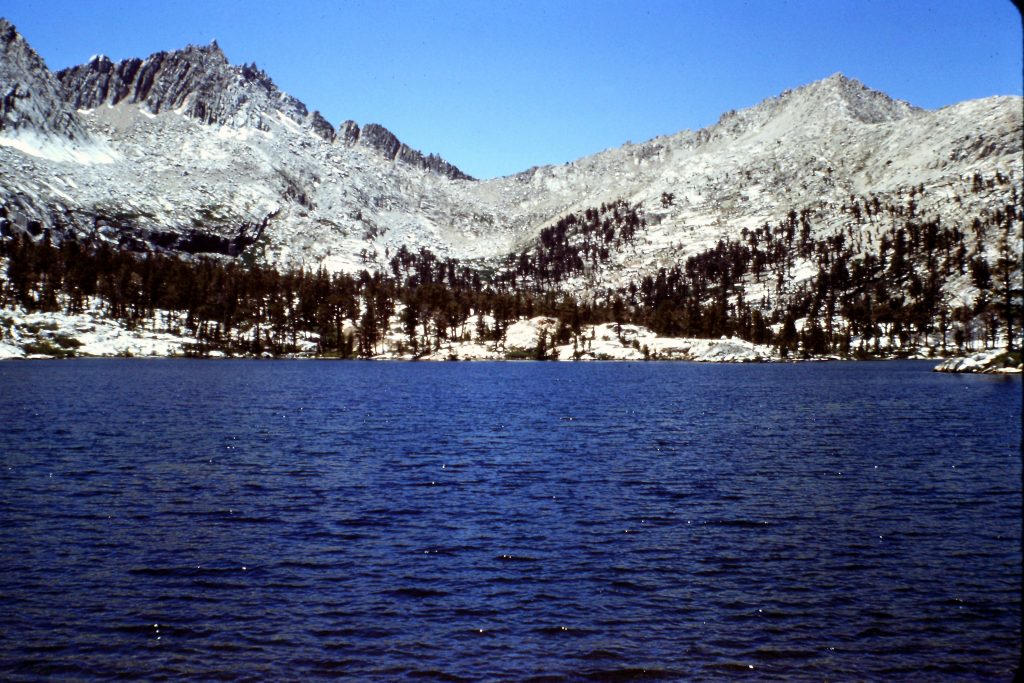 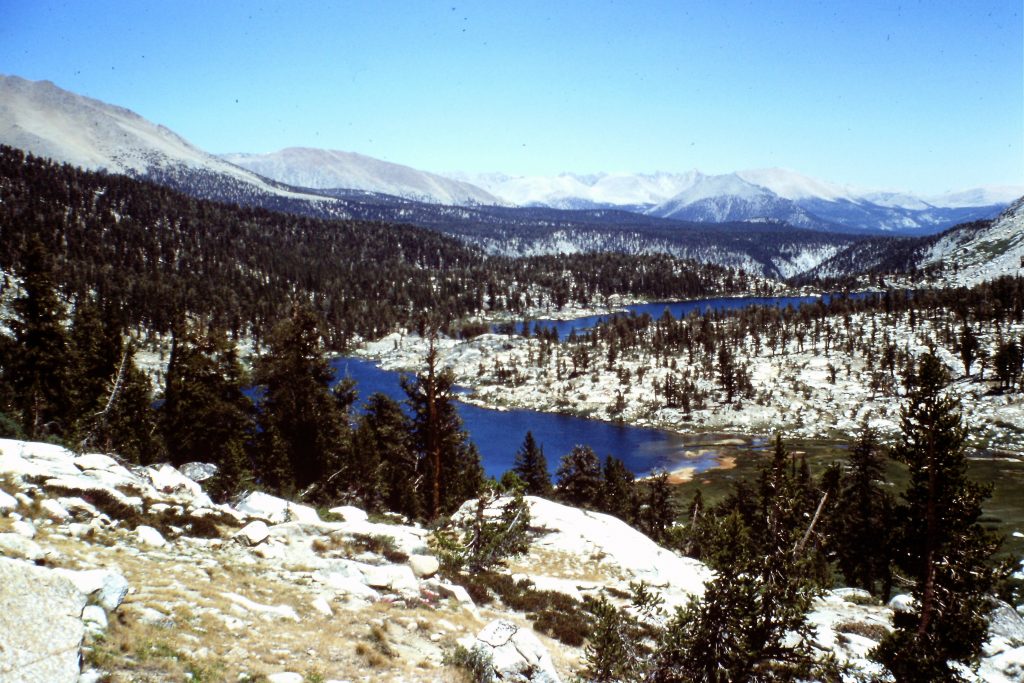 On my final day, I hiked out to Mineral King via Glacier Pass which was a cross-country journey from Spring Lake. On the West Side of the pass, I joined up with the Sawtooth Pass Trail which was a bit of a homecoming for me. In 1974, I was stationed at the Lookout Point Ranger Station for 4 months and the Atwell Ranger Station for 2 months. Both of these stations were on the Mineral King Road and I spent almost all of my free time hiking in the Mineral King Valley.