The White Cloud Peaks are a land of forest, water and rubble stacked on end. Located in Central Idaho (southeast of Stanley, Idaho), this rugged range is an integral part of the Sawtooth National Recreation Area. Dwarfed by the popularity of the nearby Sawtooth Peaks, the range is relatively deserted.

The oval-shaped range is about 20 miles long and 16 miles wide. The name White Cloud Peaks was given to the range because the peaks resemble white cumulus clouds when viewed from a distance on clear Summer days. This illusion is due to the geological makeup of the range, which is dominated by white sedimentary limestone. The Salmon River forms both the east and north boundary of the range. The East Fork of the Salmon River flows along the east boundary. The Boulder Mountains establish the south boundary of the White Cloud Peaks.

Although not among the highest of Idaho’s mountains, the White Cloud Peaks dominate the neighboring Sawtooth Mountains, with elevations climbing to 11,815 feet at the summit of Castle Peak. 17 other peaks reach over 10,000 feet. The USGS has arbitrarily tagged a northern group of 4 unnamed peaks specifically as the White Cloud Peaks. The highest point in this group is 11,314 feet. Perhaps the most impressive geological structure in the White Clouds is the Chinese Wall, which is a formidable barrier that reaches 11,238 feet and includes a number of subsidiary peaks.

The geologic history of the range is highlighted by the effects of the Ice Age and extensive mineralization. Glaciers intensively carved the peaks and canyons, scraping out beautiful lake basins and slicing steep faces from the White Cloud limestone. Over 120 lakes dot the landscape, many of them located in beautiful alpine cirques. The mineralization of the range is marked by the presence of gold and silver, which brought mining activity to these mountains as early as the 1880s. The remains of this activity can be found in the Fourth of July, Three Cabins and Washington Basin areas.

Much of the upper reaches of the White Clouds is a barren, treeless world of alpine meadow and rock. The lower slopes are covered with dense stands of trees, including Douglas fir and lodgepole pine. During the short Summer seasons, wildflowers grow in great clusters, covering the meadows and dressing up the high mountain slopes. This rugged landscape is the home of many different species of wildlife. The larger species include elk, deer, bighorn sheep and mountain goats.

The few climbers that venture into the White Cloud Peaks come to climb Castle Peak. According to one “hiking guide,” there are a number of routes up the peak but, in truth, none of the routes up this crumbling mountain are easy climbs. The objective problems encountered in climbing Castle Peak are loose rock combined with excessive steepness, an Idaho tradition. While a scrambler can generally find at least one easy talus slope to the top of most White Cloud Peaks, Castle Peak is in a class by itself. The wedge-shaped peak is a complex maze of rock walls, talus slopes and treacherous gullies which culminate in 4 summit towers of almost equal height. The peak’s shattered rock gives its own definition to the word “grungy.”

The North Side Route begins at an isolated and unnamed lake (9,419 feet) located just northwest of the peak. See the Boulder Chain Lakes quadrangle. There is no trail to the lake, but a good cross-country route can be found leading directly to the lake from a point near the Chamberlain Basin-Wickiup Creek Trail junction. There are several exceptional camping spots as well as good fishing at the lake.

From the lake, go due west and climb the headwall by following a winding route next to the waterfall. At the top of this first obstacle, the route traverses the talus-filled basin surrounded by the Serate Ridge to the north and west and Castle Peak to the south. Follow the talus slope to the south, staying close to the edge that falls off into the unnamed lake. When the angle steepens dramatically, the route cuts directly to the east, winding along just under several threatening towers until the talus slope ends at the mouth of a prominent debris-filled gully. This major gully separates the North Buttress from the North Face. The “big gully” is a nightmare of loose rock and is no place for more than one party at a time. Climb the gully, making your own best guess about which side contains less loose rock. At the top of the gully is a small saddle. The route goes from the saddle onto the face and then contours around and then up to the prominent notch 200 feet above.

The notch separates the 2 easternmost of Castle Peak’s 4 summit towers. The easternmost summit is about 10 feet shorter than the other 3 summits while the 2nd summit is arguably the highest of the 4. From the notch, the route goes up for 40 feet along the 2nd tower’s edge and then drops down along a narrow ledge and out onto the North Face. The route squeaks out along the ledge, passing several climbable gullies on the way. The 3rd gully took us to the summit via a couple of airy moves. From the 2nd summit, it is possible to scramble over to both of the Western Summits. I climbed all 4 towers and I’m still not sure which one is highest. There are rock cairns on 3 of the 4 and survey markers on the Westernmost Summit.

In addition to Castle Peak, scramblers and peakbaggers will find the entire range enticing. There are many unnamed peaks that are worthy of recognition. Although technical rock climbing is not available due to the broken nature of the rock, Winter mountaineering offers some interesting possibilities and, more than likely, a great deal of solitude.

There are a number of good access points to the White Cloud Peaks. On the East Side of the range, a road up the East Fork of the Salmon River provides access to Big Boulder Creek Trail and to Little Boulder Creek Trail. These 2 trails provide access to the heart of the White Clouds at Big Boulder Lakes and Little Boulder Chain of Lakes, respectively. Popular West Side approaches include the roads and trails up Slate Creek, Fourth of July Creek, Pole Creek and Fisher Creek. 8 USGS quads cover the White Cloud Peaks. Additional information is also available from the Sawtooth National Recreation Area headquarters. There are also several fine guidebooks published on the Sawtooth National Recreation Area which include sections on this range. 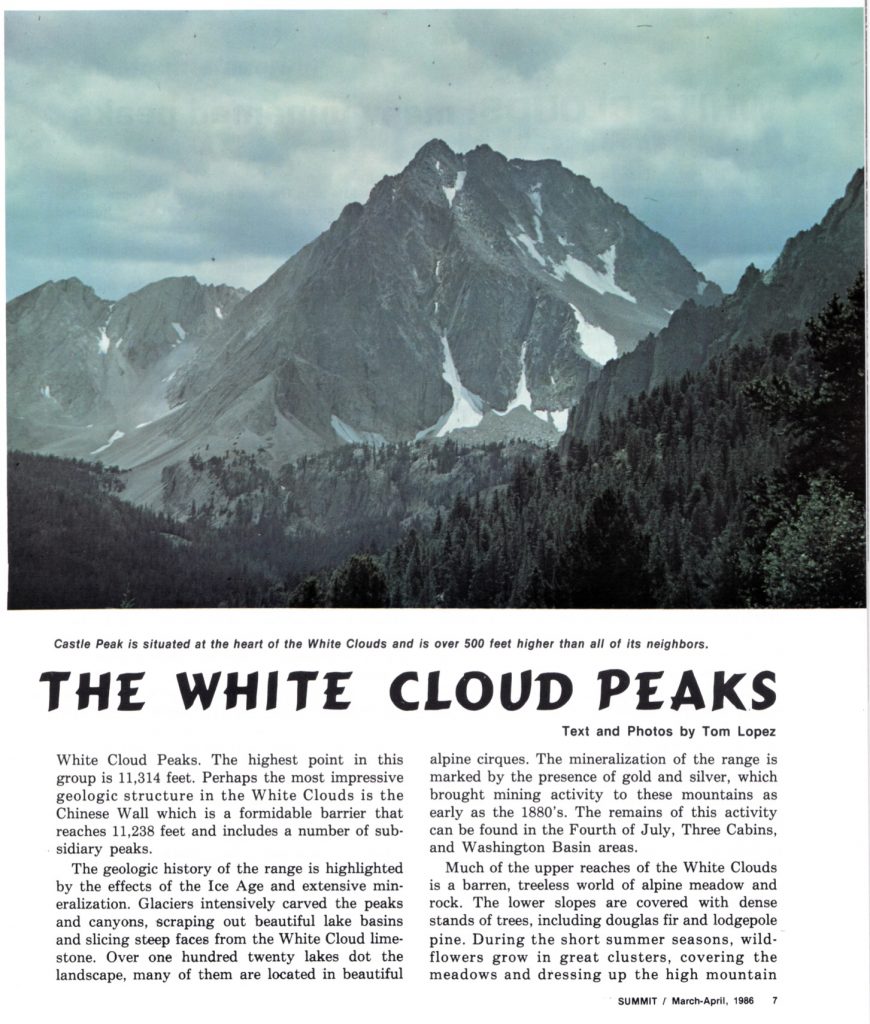