Beginnings on the North Island

Back in the good old days, I worked seasonally for Park Service and was free from 4-6 months a year to do whatever I could afford. Since my free months came during the North American Winter, I was often drawn to the Southern Hemisphere. New Zealand was a perfect fit. The country is roughly the size of California and, in 1975, its population was only 3 million. The country has 2 large islands. The North Island is semi-tropical in its northern extreme and volcanic in its makeup. The South Island stretches far south into near Antarctic environs and is dominated by a massive mountain chain, the Southern Alps. These highly-glaciated mountains were, and are, a breeding ground for tough mountaineers like Sir Edmund Hillary.

In 1975, the New Zealand Government was very much an anti-immigrant regime and I and every other tourist could only get a 30-day visa. Thus, in planning my trip, I came up with a tight itinerary to make the best use of my limited time. I hoped to hike and climb as much as possible as well as take in the local culture. I planned to start my visit in Auckland, the country’s largest city, located on the north end of the North Island and then work my way to the South Island. My plans for the North Island were somewhat flexible. I had 2 hikes planned for the South Island: the Routeburn Track and the Milford Sound Track. I also planned to visit Mount Cook National Park.

After arriving on an overnight flight from Tahiti, I secured a bed in a hostel. I met a guy from Michigan who had just arrived. Both of us were jet lagged but anxious to start exploring this new country. He and I spent the next several hours walking around the city including a stroll to the top of Mount Albert, a 440-foot volcanic cone. Auckland is a major port and a large city but it had the atmosphere of a quaint fishing village. Upon returning to the hostel, the jet lag caught up with me and I slept for 23 hours. I was a little disgusted at having wasted 1/30 of my allotted visa time sleeping. 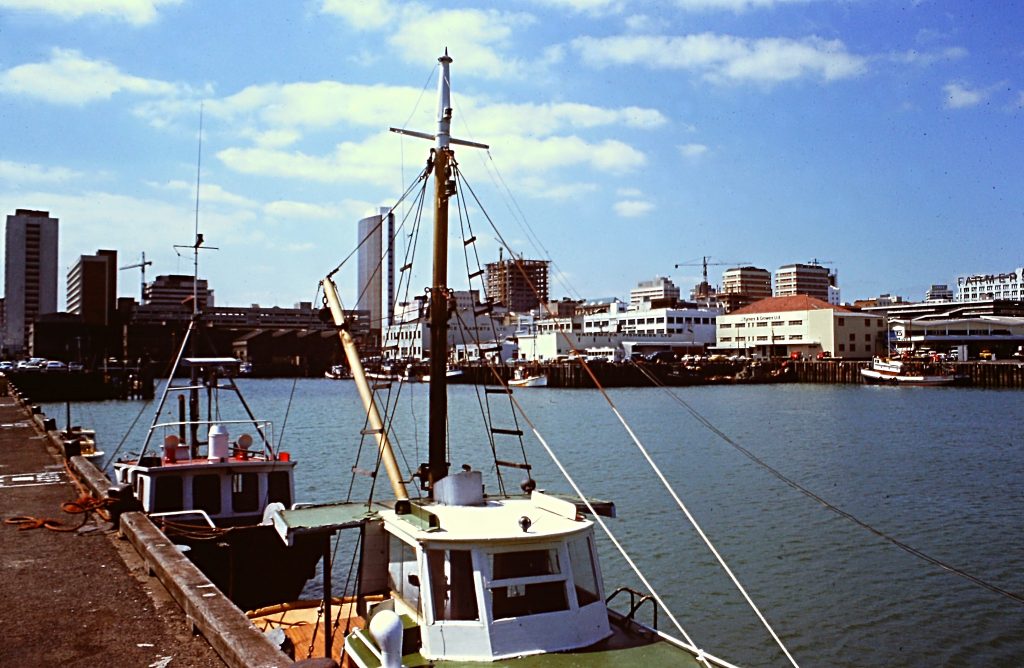 Auckland was a modern city with a busy port.

After my long sleep, I was ready to explore the North Island. I bought a bus ticket to Rotorua, a town surround by geothermal formations way beyond what we have in Yellowstone National Park. The scenery, including views of the Tongariro volcanoes and Mount Egmont, was spectacular. New Zealand buses were not air-conditioned and made a lot of stops. After spending a delightful night in Rotorua, I decided to continue my journey south by hitchhiking. 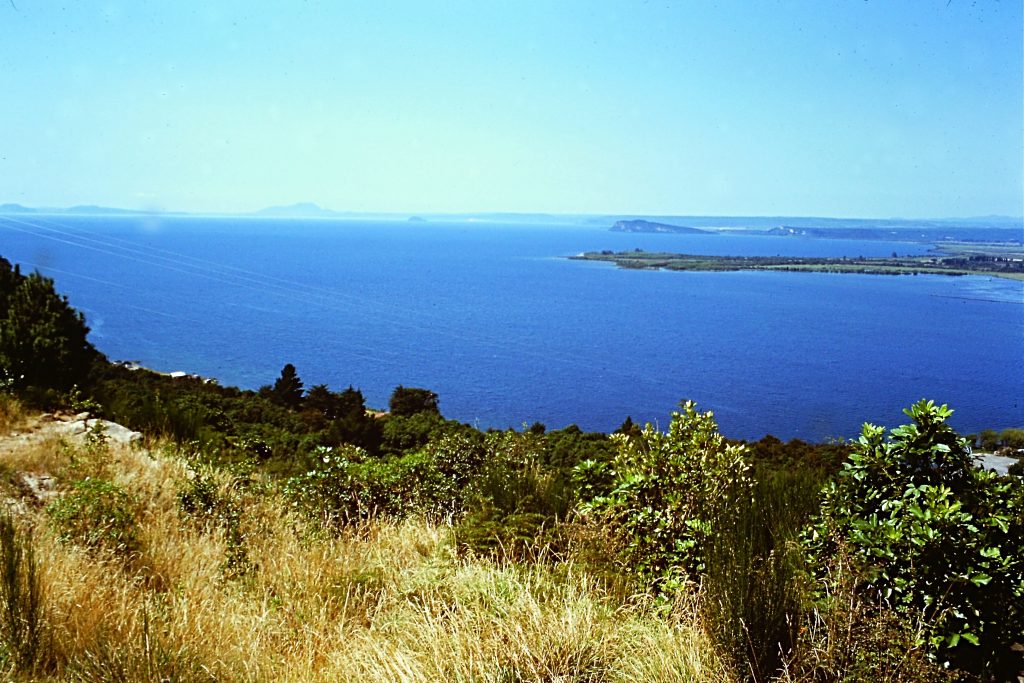 I did not have time to examine the North Island’s beaches but the views of the coastline were always striking. 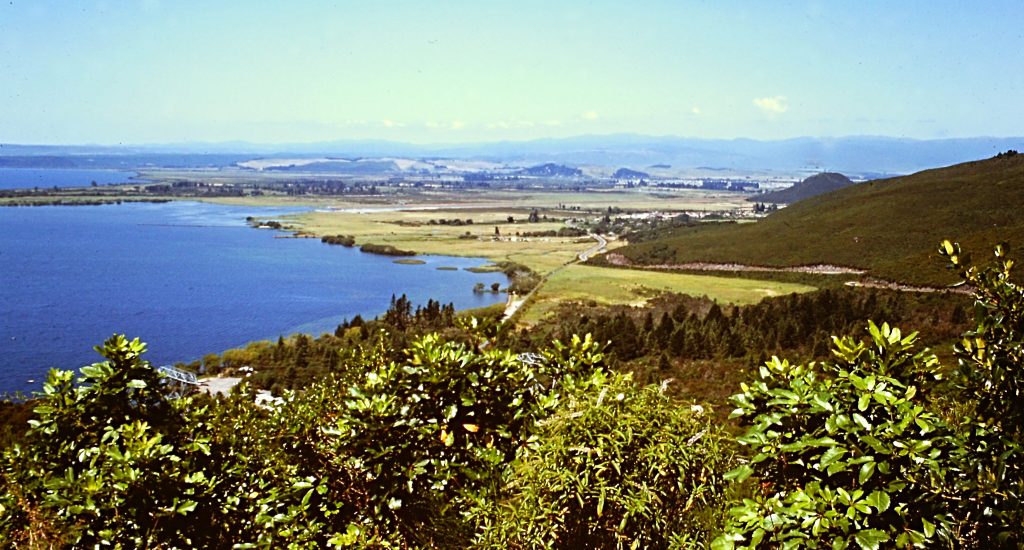 Lake Taupo near Rotorua is another outstanding feature on the North Island.

After 3 short rides, I was picked up by a gal from South Africa in a beaten-up VW bug who was heading to my destination, Wellington on the south tip of the North Island. I had a great map of the island which showed a direct route (marked in black) across the center of the island. To me it looked like a major road. After showing her the map, she was all for taking the route. The pavement soon ended and we found ourselves traveling in remote, nearly unpopulated country. We passed sheep stations, crossed a one-lane suspension bridge, drove through a long one-lane tunnel, and visited the grave of a pioneer who died exploring the center of the island in 1916. I don’t recall seeing one car for 50 miles. My driving host was a strong supporter of Apartheid and we had a lot of time to discuss politics on that lonely road. When we finally reached a town, we were nearly out of gasoline. 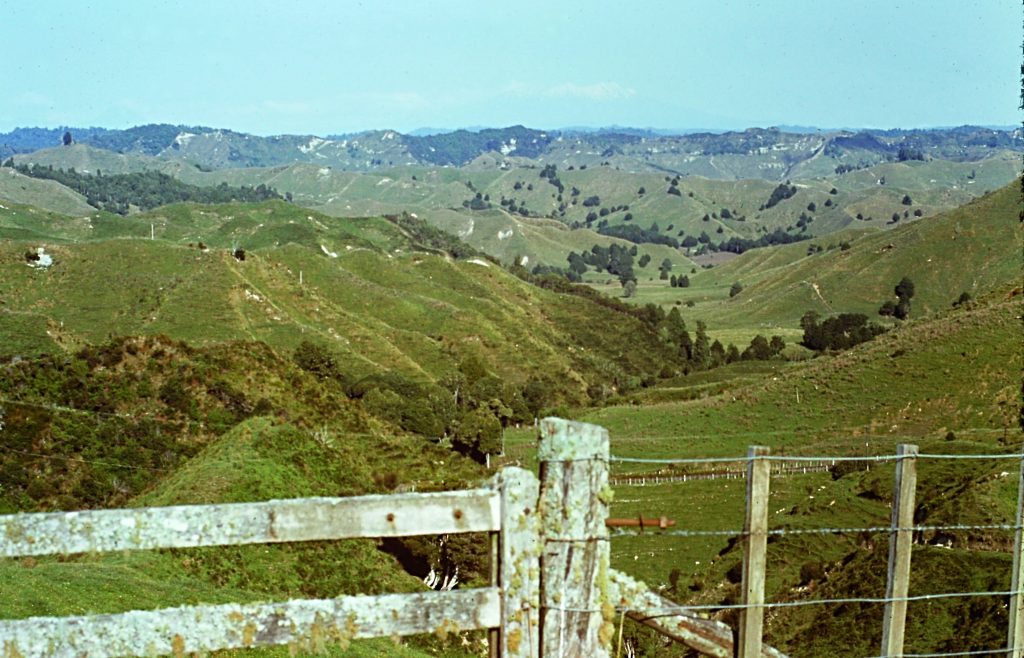 Sheep herding is a major occupation in New Zealand. This land in the middle of the North Island was heavily grazed. 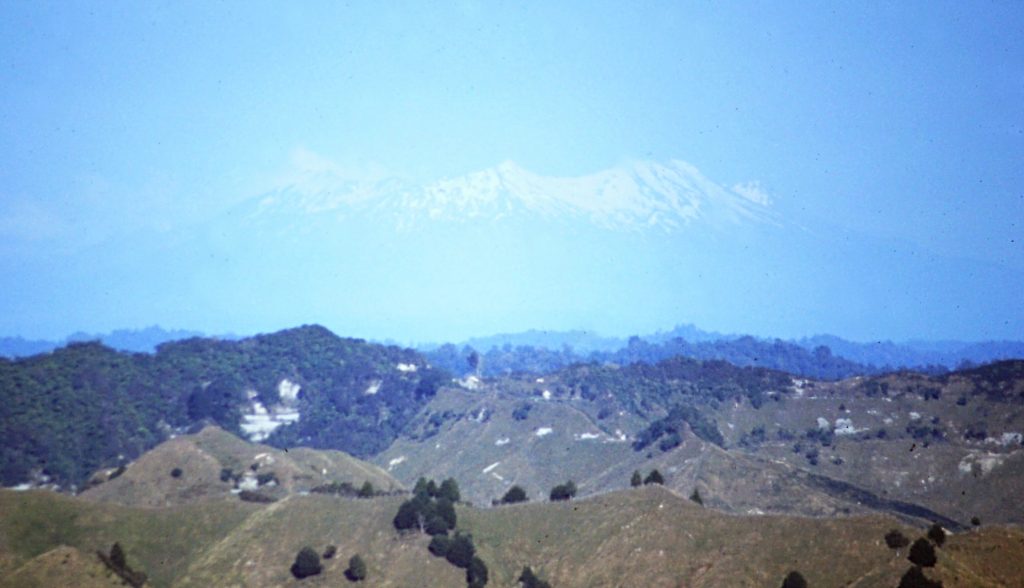 The center of the North Island is dominated by massive volcanoes, all enclosed within a National Park. Here you can see Tongariro National Volcano raising up in the distance. 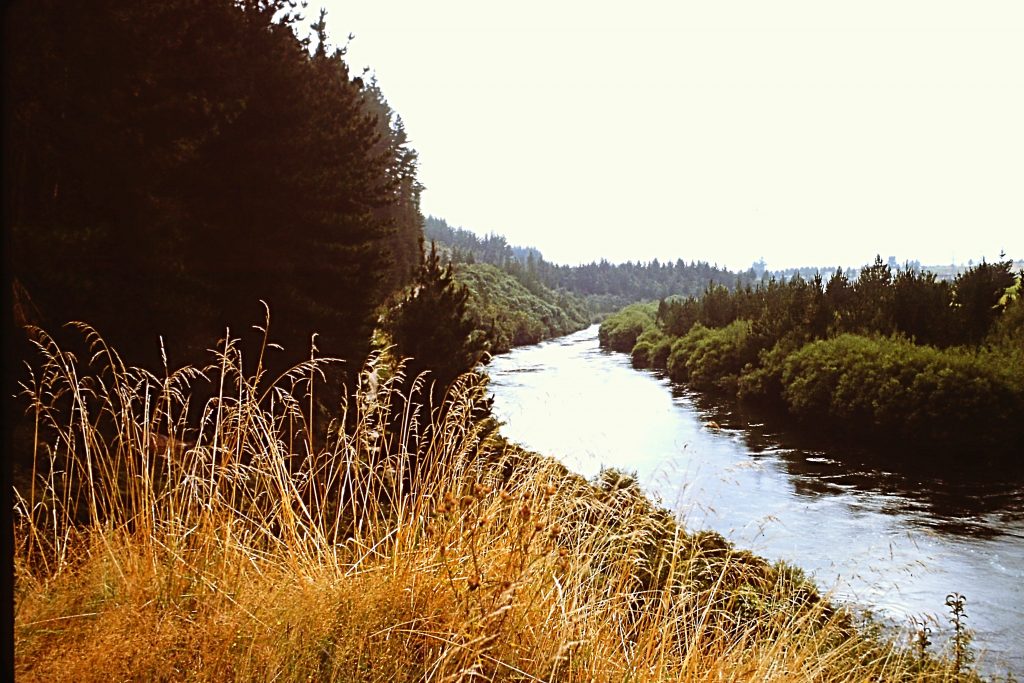 New Zealand planted a lot of pine trees on ground that was formerly logged and then grazed by sheep. These trees have helped the land and watersheds recover and provided another source of income for the country.

After a night on the road, we arrived in Wellington and parted. I then took a ferry from Wellington to Picton on the North Island. The ferry service was everything that the bus service was not–comfortable and efficient. The ferry was the largest vessel I had ever been on and the crossing the farthest out to sea I had ever been. The trip took a little over 3 hours to cross the Cook Strait. We had perfect weather. From Picton, I took a train to Chirstchurch where I stayed at the local YMCA. Christchurch was a quintessential British town in 1975. Unfortunately, it has been devastated by earthquakes since my visit. The friendliness of the New Zealanders or Kiwis that I met was outstanding. 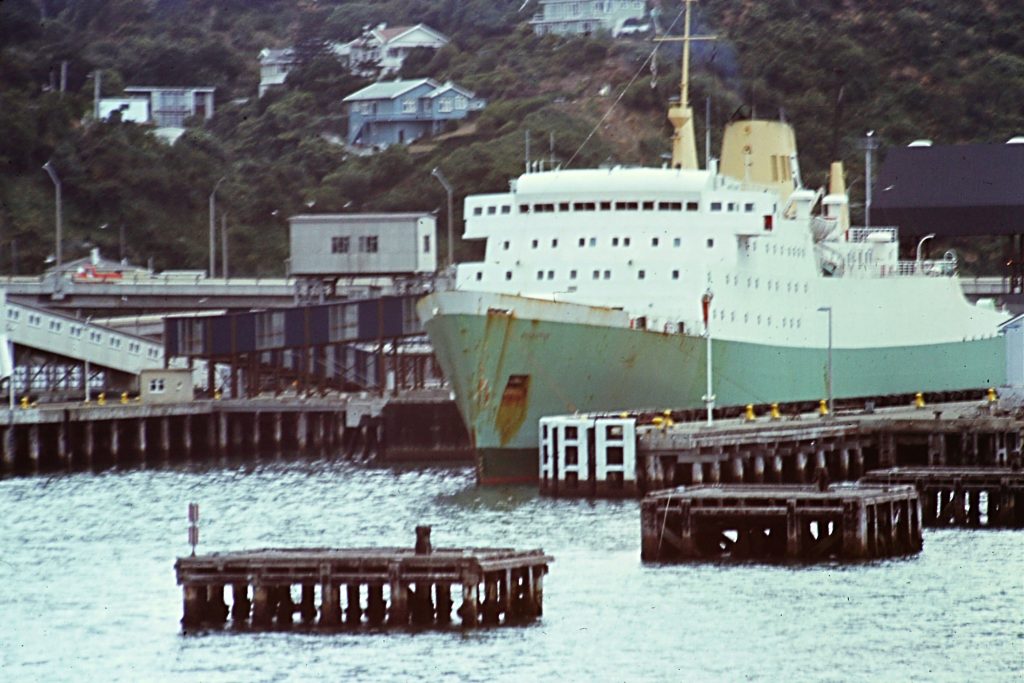 This is the ferry I took across the Cook Strait. I believe that it is still the largest ship that I have ever sailed on. 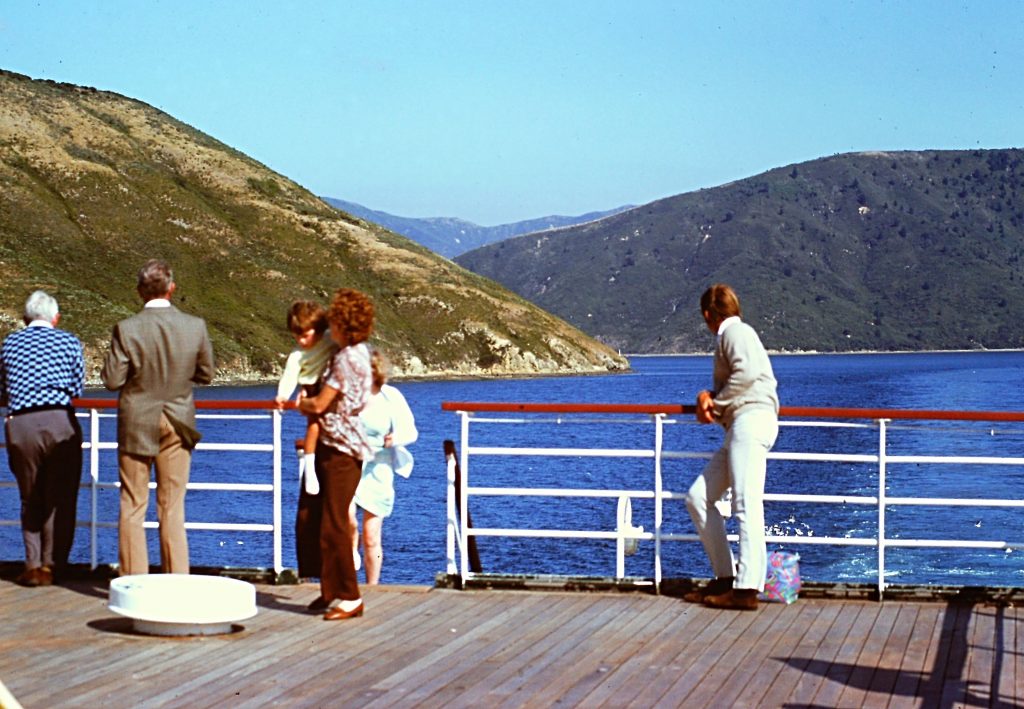 It takes 3 1/2 hours to cross from the North Island to the South Island. Over 40 minutes of the trip takes place in the massive Wellington Harbor. 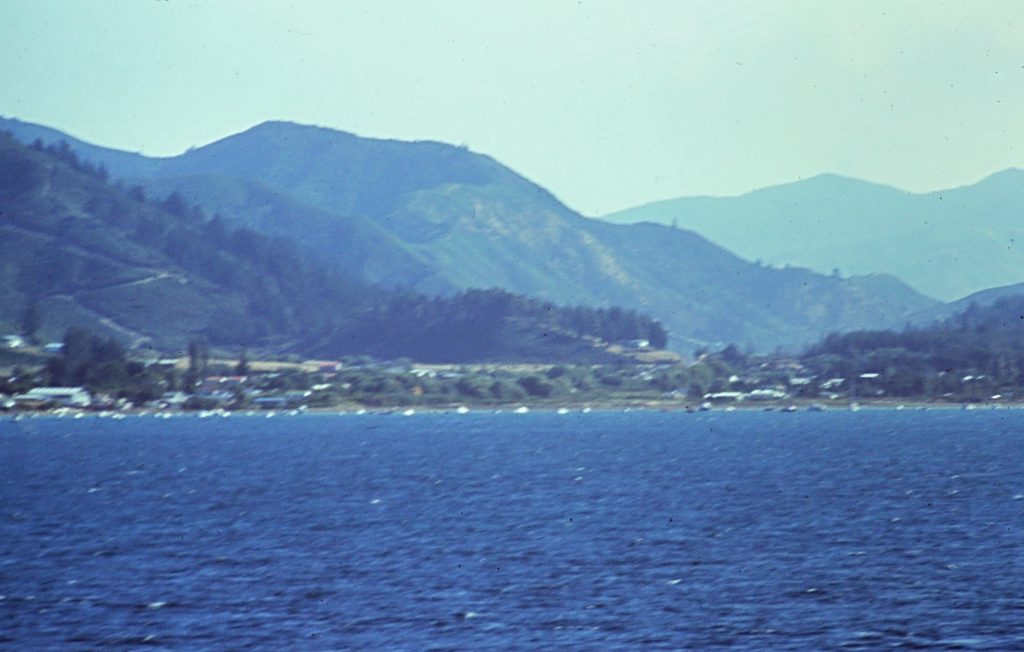 Picton, New Zealand as the ferry arrives at the North Island.