Bob Boyles provided the following history and, with Wes Collins, the route descriptions for these two East Face routes.

I first visited the East Side of the Lost River Range (The Pahsimeroi Valley) in 1972, while working on a helicopter contract for the Forest Service. Flying through the range provided me a view that few ever get to see. While all of the range is impressive from the East Side, one face stood out from the others.

When our contract with the USFS finished at the end of summer, I took a break from the 24/7 aviation life I was accustomed to. During this down-time, I happened to notice an ad for an introductory rock climbing class and thought, “Wow. Cool. Ropes and everything, I’m game for this!” I talked a couple of friends into joining me for the class. After completing our class, we were ready to test our newly-learned skills on a real mountain, but Winter soon arrived and we put our plans aside until the next Summer.

Summer came late in 1973. It wasn’t until the end of June that we were able to get in for a closer look at the East Face. As the morning sun warmed the snow high in the cirque, we watched slide after slide tear loose and nail virtually every approach to the mountain. Along with the snow slides came a lot of rockfall as well. After sitting and studying the face, it looked to be climbable. There was no doubt, however, that the attempt would have to be made during the dry season. In 1974, we returned for another exploratory trip and picked out a line on the face that followed some water streaks in a nearly straight path to the summit. We decided that this was the route we would attempt on our next visit.

A couple of years passed. In trying to sell potential climbing partners, I described this face as “Idaho’s Eiger” but, at the time, the range had no technical rock routes. Idaho has so much fine granite, it was hard to justify a trip to the Lost Rivers, where the limestone rock had a reputation for being nothing but choss.

In the fall of 1975, Mike Weber and I decided to throw caution to the wind and give this face a serious attempt. We loaded up all of the gear we thought we’d need and made the brutal drive to the end of the road up the West Fork of the Pahsimeroi River. Hiking through open sagebrush, we made quick work of the approach and found a nice grass-covered spot for our camp at the lower tarn just above timberline. Curious to see the face up close, we grabbed our crampons and axes and headed up the snow and ice to where the bare rock began. 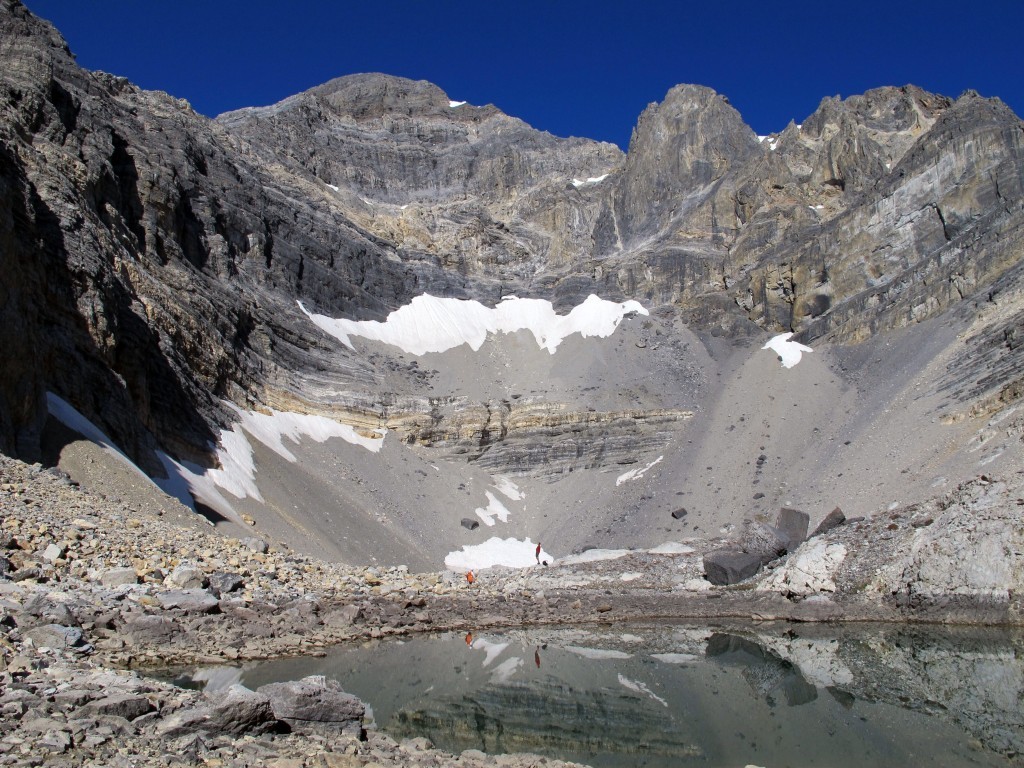 A picture-perfect September day in the Lost River Range (9/24/11). The vertical rise from the lake to the summit is 2,440 feet. Bob Boyles Photo

Just as we were approaching the final section of snow and the start of our proposed route, we heard a rumble from above, freezing us in our tracks. A Volkswagen-sized rock was flip-flopping down the face. Within seconds, it reached terminal velocity bouncing back and forth down the face. We stood motionless in our stances trying to figure out if we should go left, right, or just clasp our hands and pray. Fortunately, the rock deflected about 40 feet to our right. We just stood there watching it tear up snow and bounce to the flats and the tarn at the bottom of the cirque.

We tried to convince each other that the face would be frozen up by morning but neither of us was to be convinced. Around 2:00AM, we were startled awake by a blinding flash of light and milliseconds later, a rumble of thunder. We both knew our chances to climb were most likely over, so we pretended to go back to sleep. Within minutes, the rain was falling at a rate of an inch or two an hour and, shortly afterward, our campsite became a flood zone. We stayed in the tent until it was surrounded by flowing water, our cue to get the hell out of there.

For decades after that ill-fated attempt, my climbing partners and I continued to explore and put up routes in the range. Despite those many visits, we never made it back to the cirque. I pretty much wrote off the East Face as being a very dangerous place and that kind of risk no longer appealed to me. Also, as time progressed, I gained the impression that sport climbing and bolted routes on established climbs were the “new norm” and the pioneering of new alpine routes seemed to have gone by the wayside.

It wasn’t until the Spring of 2011, during a discussion of Lost River climbs on the Idaho Summits web forum that a new spark of interest began. When I first described the East Face Cirque, most local climbers did not know what I was talking about. This despite most of them having climbed Mount Borah multiple times. One did, though. After reading my description of the face, Wes Collins, a local climber and native of the area, immediately became interested. Soon a new discussion started about taking a trip to the cirque. 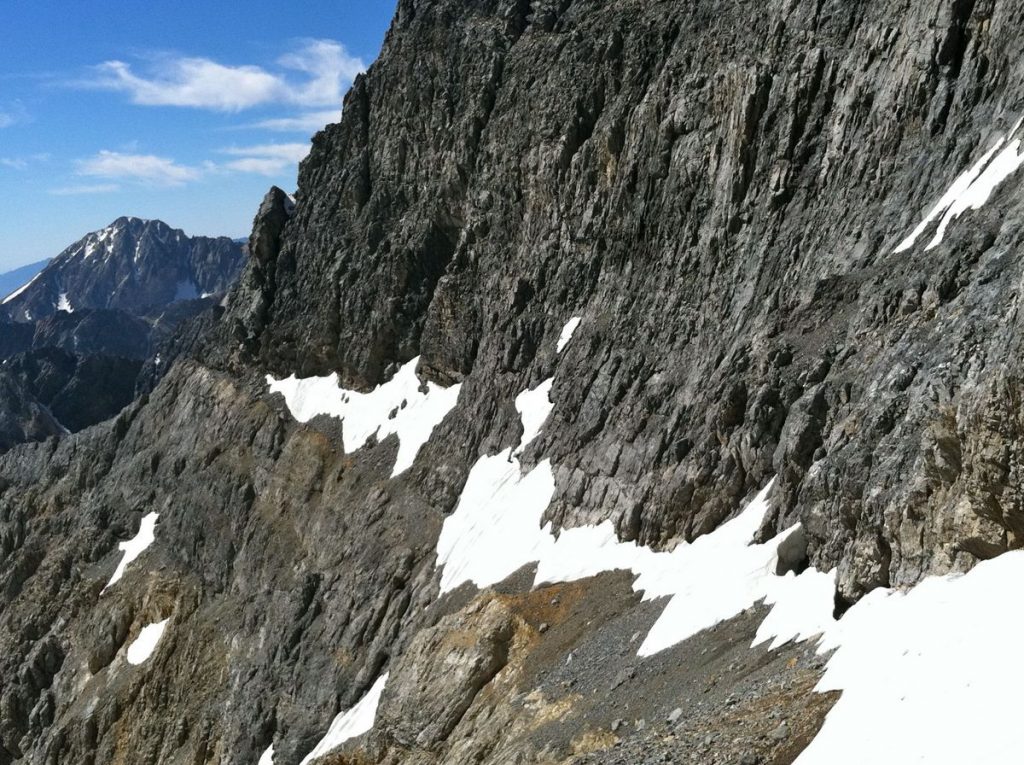 The Dirty Traverse ledge leading out to the East Ridge from the center of the face. Wes Collins Photo

Wes couldn’t wait to see the face up close so he took off on an exploratory trip with his wife and dog. This trip in 2011 started as a recon, but Wes found himself drawn to the face like a magnet. The following is Wes’ account of the first ascent.

Bob got me all fired up to get a look at the East Cirque and what he described as Idaho’s Eiger. I certainly wasn’t disappointed. Susan and I planned the trip as a leisurely backpack into Lake 10204 to take in the views, but I tossed an ice axe and some light crampons in the truck just in case. 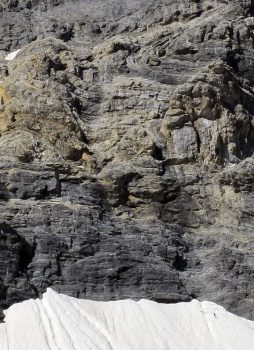 Dirty Traverse-1.
Standing on the last of the snow slopes below the first wall. Susan Collins Photo

I spent a lot of time looking at the face before I even thought about a spot for the tent. Stupidly, I’d left my ice axe and spikes in the truck, but at this point I knew I was going to make a serious try for the summit. It didn’t take long to pick out a couple of possibilities, but the most probable line would involve a long traverse across a talus-covered ledge on the lower face. I started thinking of the route as the Dirty Traverse before I even put my boots on it. Morning was an easy laid-back affair. We sipped coffee and we watched the sun line slowly make its way down the mountain. I had to wait until nearly 10:00AM before the snow softened enough for step kicking. The first, lower snowfield was pretty firm, but the second was much softer.

I’d found a nice tooth-shaped chunk of limestone that probably wouldn’t have done much more than keep my feet downhill if I took a fall. I was on my own, but it was still embarrassing to have the damn thing in my hand and I had to keep fighting the urge to hide it in my pocket. At the top of the snow, the randkluft was several meters deep and the first tentative moves on rock over the blackness below felt pretty exposed. The rock, however, was surprisingly solid and clean. 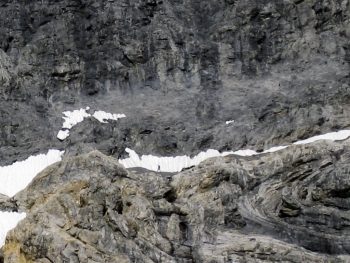 Wes Collins about a third of the way across the traverse. Susan Collins Photo

Once on the ridge, I made my way up an easy Class 5, 70-foot buttress but it could have been easily bypassed by scrambling around its West Side. Most of the ridge above the traverse is Class 3 or easier. 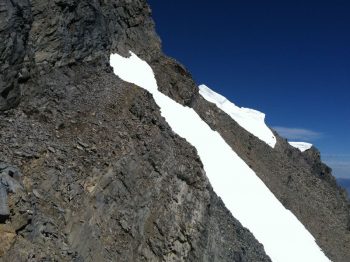 The key to the climb. A tiny col where the East Ridge meets the Upper East Face. Cross the snowfield “sky ledge” to get to the summit. Wes Collins Photo

As I continued up the ridge, my doubts got bigger. The entire North Side of the East Ridge is very tall and overhung in several places. More and more, I suspected it would dead-end into the headwall but at the last possible minute, a tiny col opened up onto the uppermost ledge (which we named the “sky ledge”) that crosses the East Face. It wasn’t until that moment that I knew the ridge would go all the way. John Platt summed it up nicely in his trip report of JT peak as the almost magical opening of doors as you climb. This was one of the most fun parts of this outing. I couldn’t agree more.

The descent follows the standard route down the mountain to the big saddle at 11,800 feet. From there, I dropped into the cirque that takes in the South Side of Mount Borah and Mount Sacajawea. There are several sections of Class 3-4 scrambling over short but loose cliff bands and several linkable snowfields, but the glissade run-out potential is pretty dangerous on most of the snowfields. At the 10,400-foot contour, the angle eases up. From there, I hiked down and around the bottom of the East Ridge and finally back up to camp.

This link will take you to an astounding video of the route by Mediocre Amature: Dirty Traverse Video.

While this route is not overly difficult, it does require a willingness to climb with long run-outs and minimal protection both at belays and while leading. Many of our belays were protected with a single piece of gear and most pitches only allowed for a few placements. Rockfall, both self-initiated and trundled from the summit, is an ever-present danger on this route. 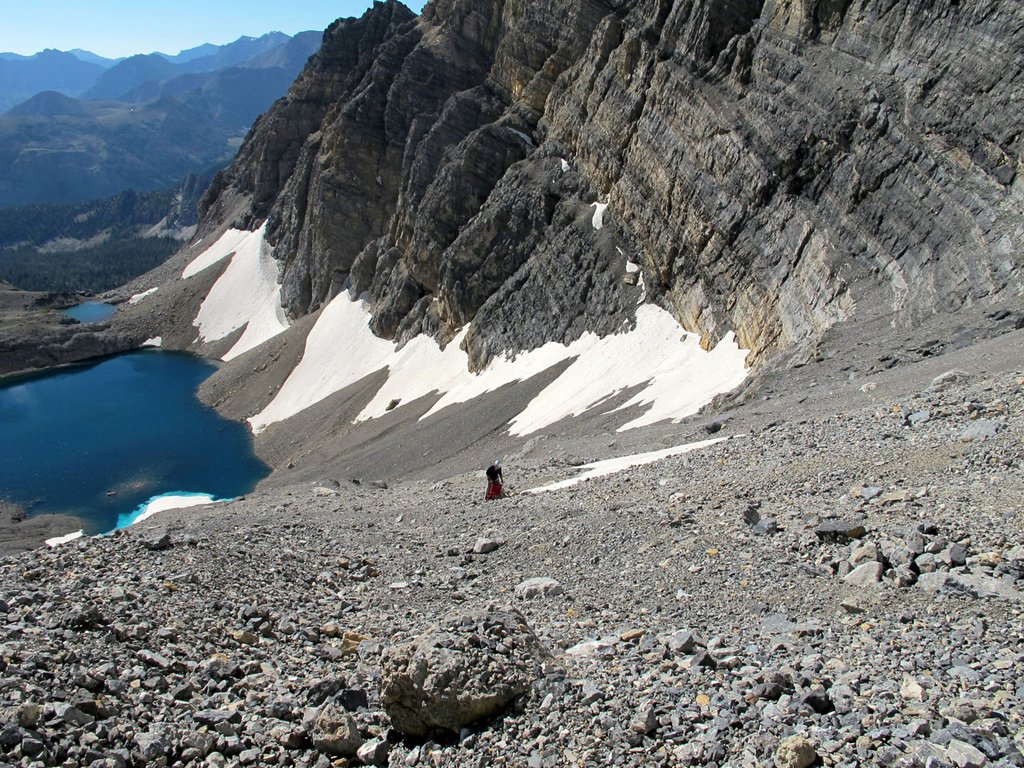 Frank on the approach to the East Face of Mount Borah. Bob Boyles Photo

The route starts slightly to the right of Wes Collins’ Dirty Traverse Route and follows the slab-like ramps for about 6 pitches of Class 4 and  low to moderate Class 5 climbing until you reach the ledge system that allows for an exit to the Northeast Ridge. From there, we climbed two pitches of very steep snow and joined the ridge. On the Northeast Ridge, we encountered a short section of water ice (WI2) and several more pitches of moderate Class 5 climbing until just below the summit, where it turns to easy, but very loose, Class 3 and Class 4 climbing. 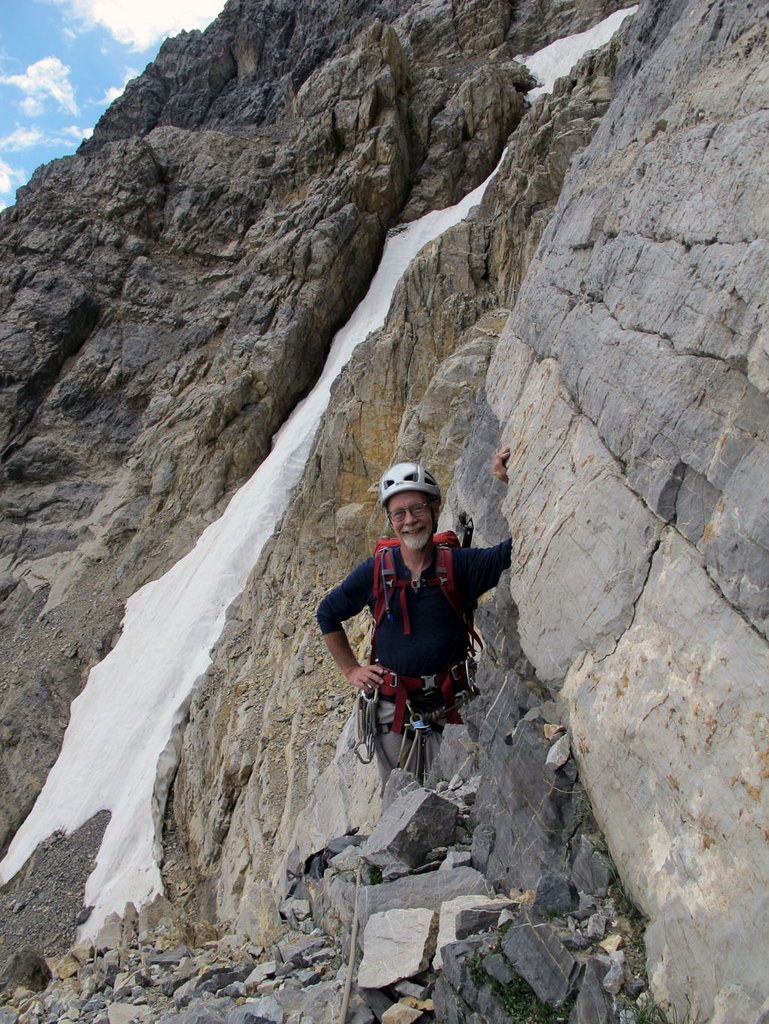 Frank on the short snow pitch that leads to the Dirty Traverse ledge. Bob Boyles Photo

This route is probably best done when there is some remaining snow to cover loose scree and talus (June/July) and, during some years, it may not be climbable at all due to the large cornice that can form and block the narrow exit to the Northeast Ridge. Parties willing to solo or simu-climb can reduce the overall number of pitches required on this route.