This is a trip report from a hike/run I did in a less-visited area of Northern Idaho recently–ENE of Orofino. On July 19th, I left Boise and drove up to the Mallard Larkins Pioneer Area of the Clearwater National Forest. Hannah McLean mapped out this route for the Wild Idaho Endurance Challenge and I was anxious to go explore a greener part of the state. 7 hours later I parked at the small pullout for the Black Mountain Trail located just east of the Canyon Work Center.

I hit the trail just after 5AM on July 20th and immediately started climbing. It’s about 8.5 miles and 5,200 vertical feet to get up to the fire lookout tower on top of Black Mountain, but a trail crew has done some work on it this month and it’s in good condition. Despite a few stretches of overgrowth (none more than 20 yards), it was easy to stay on trail. The thimbleberries were just starting to ripen and it was a nice cool morning. I made it to the top in 3 hours and had a nice chat with the Fire Lookout. He gave me a little info on trail conditions, pointed out and named all the surrounding peaks, and showed me a shortcut back down to Black Lake.

The Black Lake Trail, which connects Black Mountain to The Nub Trail, is faint and can be difficult to follow at times. I lost the trail twice. The second time, instead of climbing down the rocks and steep slope, I traversed the hillside and continued east until the trail rose back up to meet me. Trail 97 (the connector to Isabella Creek) is only 2 miles long and is easy to follow with only a little bit of overgrowth and a couple blowdowns at the north end. I took the left fork at the next junction and started hustling down the Isabella Creek Trail. I wish that I could have run more since I knew that I had another big climb up Elmer Creek coming up, but Isabella Creek is just overgrown enough, with just enough blowdowns and just enough creek crossings to make getting into a nice running rhythm difficult. The silver lining is that this gives you more time to enjoy the occasional views that open up to the north.

The Hearts Pass Trail runs east-west across the ridge pictured above and I would be on it later that afternoon. Almost to the bottom of the basin, I turned right onto the Elmer Creek Trail. After crossing the creek on some washed-down logs, I started the second and last big climb of the route. This trail has been worked on recently and is in great condition, well at least it is for 3/4 of the way up. After the last big crossing of Elmer Creek, it just disappeared. I checked the GPS and according to it I was above the trail by a couple hundred feet.

I didn’t recall seeing any other options and the Gaia map is often a little off. I started heading in the general direction that the trail took up the hillside. The downside to this is that I soon found myself pushing through very thick, woody shrubs and climbing over downed trees. The upside is that I started noticing flags that had been intermittently hung off branches along the way I was heading. I tried to stick to the flag route (not always possible) and after about 30 minutes and 1/4 mile, I popped out onto a faint trail that I was able to follow all the way up to Smith Ridge and a more-established trail.

My best guess is that the Forest Service has been working on this overgrown trail and plans to come back and clear out the rest of it. At the top, I turned right onto Smith Ridge Trail/FST-240 until it passes under Larkins Peak (another possible short side trip) and becomes Heart Pass Trail/FST-065. This is the highlight of the route and the payoff for all of that climbing. There are sweeping views across the basin, lush green hillsides, a few rocky slopes and several lakes to look at along the way. This area is relatively well traveled and is much easier mileage than all of the ups and downs that I had done up to that point.

Unfortunately, I was also tired from all of the ups and downs and couldn’t make as good a time as I would have liked. After winding around Northbound Lake and going past Mallard Peak, the section back to the Nub Connector 97 is a really lovely, forested, gradual downhill with gorgeous views to the west. The last short climb up to The Nub was great. A not well traveled, but still easy to follow, trail through beautiful forests and a few open meadows. I snapped a few pictures and started down the 5-mile and 5,000-foot descent back to the road.

The first mile was steep but open and easy to follow. However, once I hit the old burn area from a fire back in 2003, I quickly found myself pushing through 3+ foot overgrown vegetation, many times not even being able to see the ground at my feet. I certainly didn’t want to get caught in this section in the dark, so I kept shuffling down the mountain as fast as I could and trying to stick to the most obvious path, hoping that I was on the right track and intermittently checking the GPS to confirm. Surprisingly, I was very successful and didn’t get lost or off trail once. As I got down to lower elevations, the thick scrub persisted but there was more of a corridor through the trees that made travel a bit easier. Before long and with fading light, I popped out onto a hillside with sandy, rocky switchbacks down and found myself back on FSR-247 on the North Fork Clearwater River. I turned right and ran on the road for about 2.75 miles until I arrived back at the van. I covered 45 miles in 15 hours and 6 minutes with 15,000 feet of elevation gain.

Afterthoughts: I’m glad that I went up Black Mountain and down The Nub Trail. As difficult as it was to come down The Nub with all of the overgrowth, I think it would be that much harder going up, as well as damn near impossible in the dark. However, I think it would be faster to go counter-clockwise around the northern loop of the route rather than clockwise (the way I went). I think there are more sections of trail that you would be able to run, and going down Elmer Creek would probably be easier than going down Isabella Creek. I really enjoyed how green and wet this area is and there is enough water along the route to not have to worry about running out. Black Mountain Trail and The Nub Trail are pretty dry though, so fill up before getting on those trails. The mosquitoes were moderately bad but they only bothered me when I stopped to take pictures, get snacks out or fill up water. As long as I was moving, I didn’t notice them at all but there were flies buzzing around a good amount of the time. Overall, this is a beautiful wilderness area of Idaho. Definitely worth the drive to this remote place. 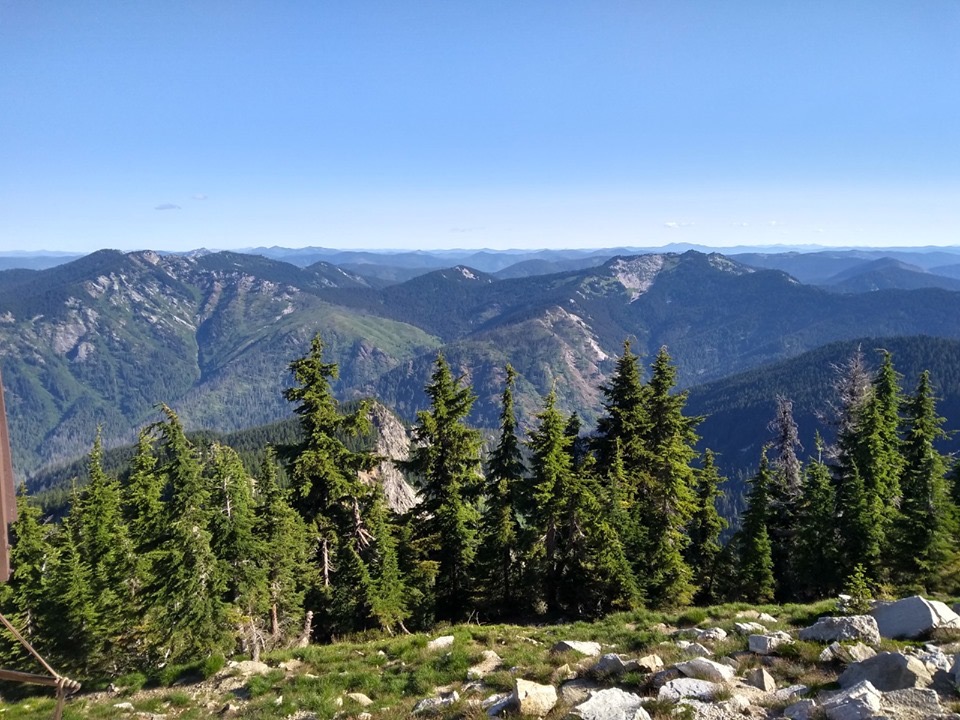 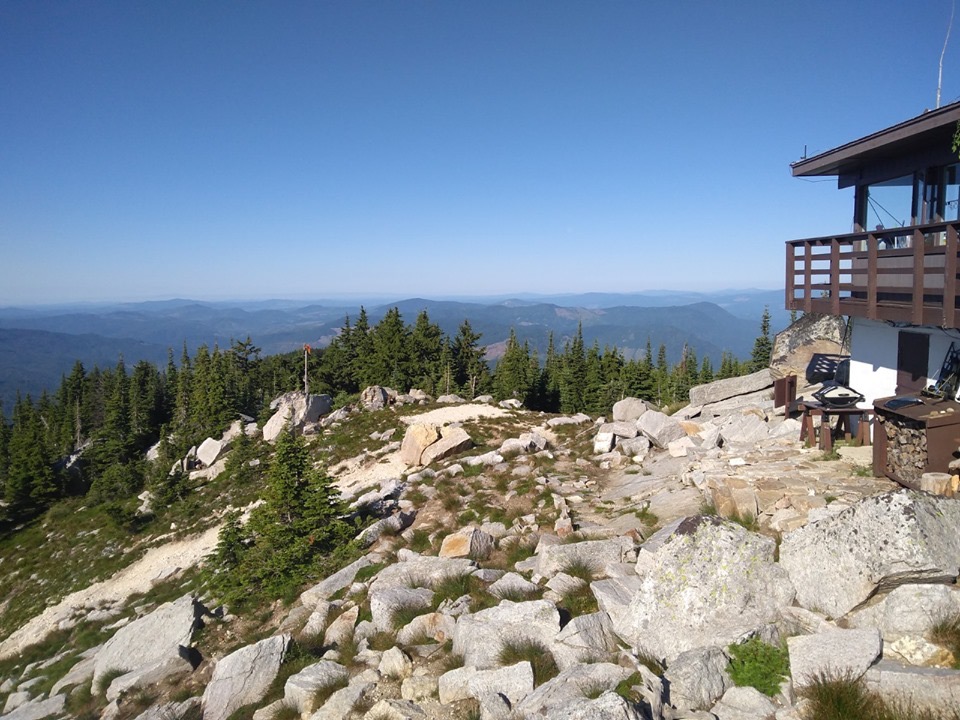 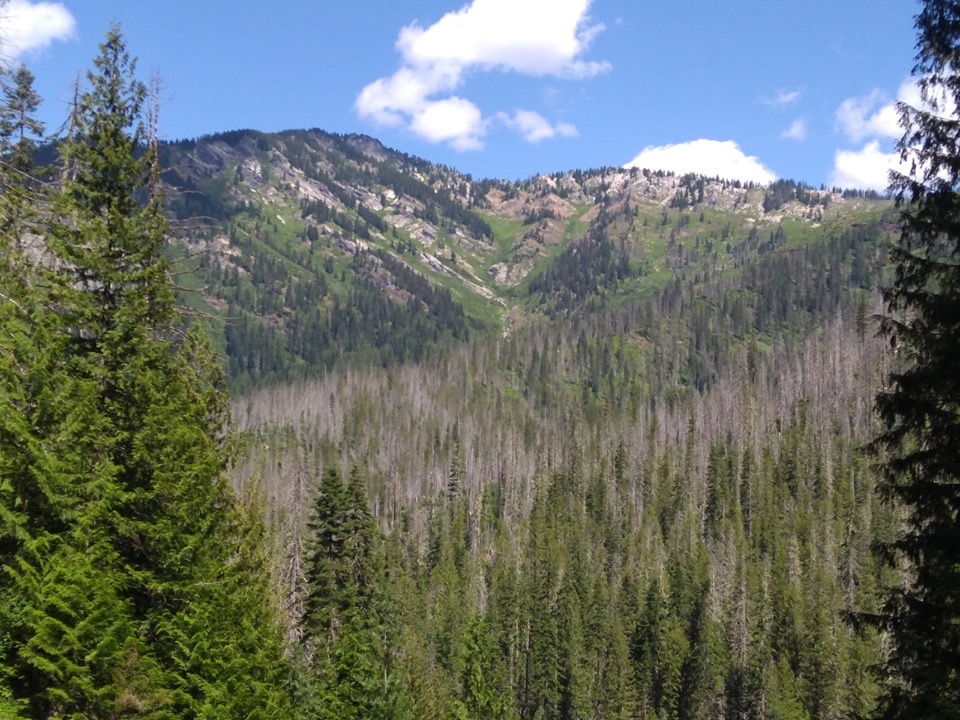 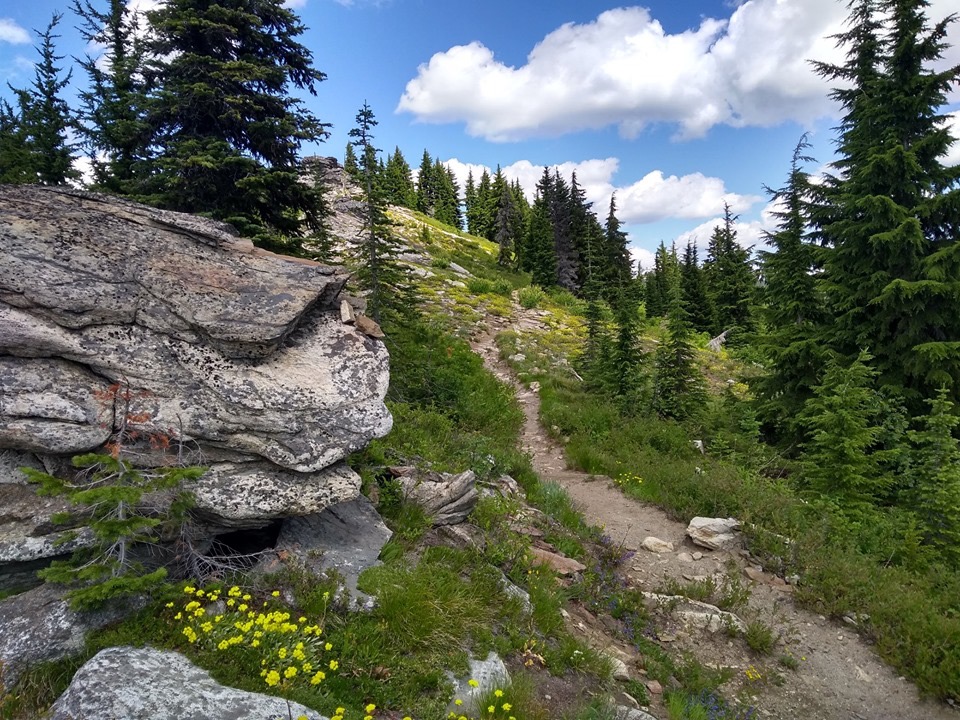 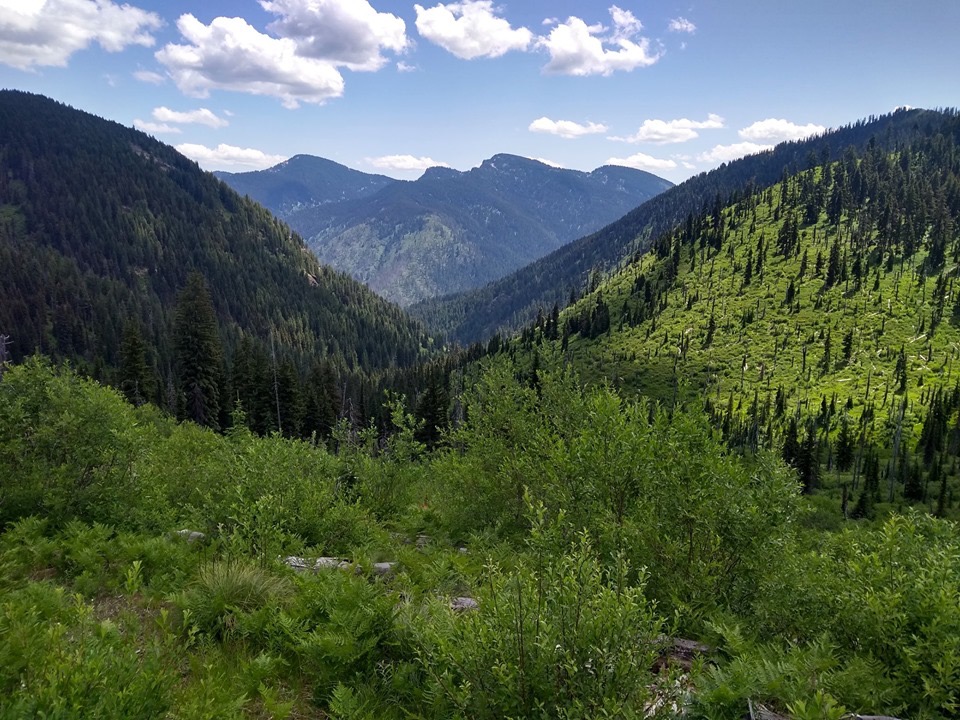 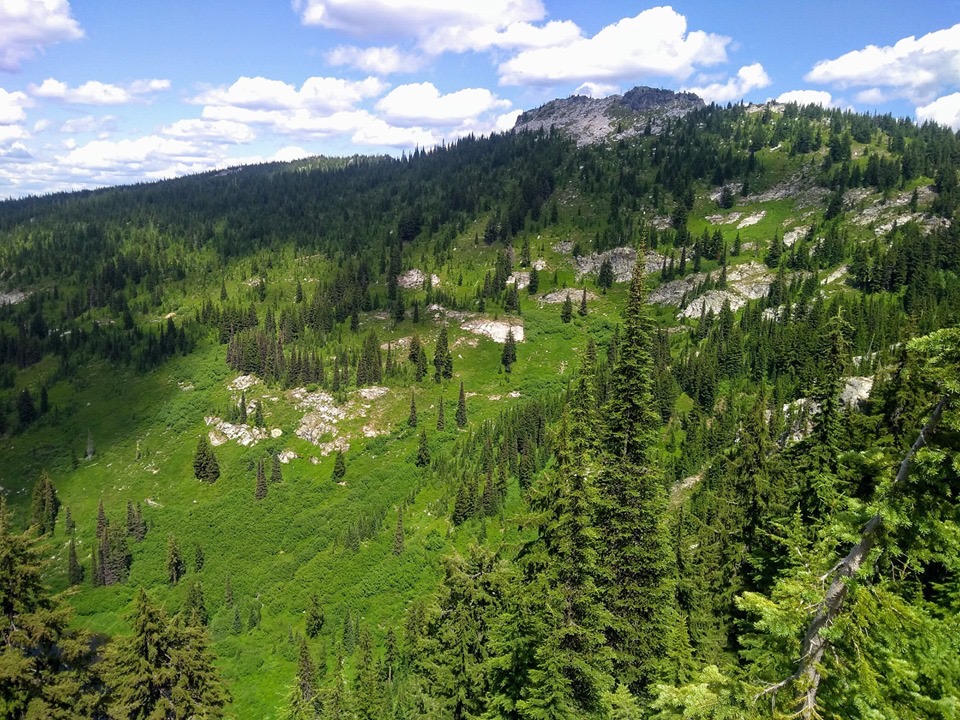