Start at the highest glacial lake in the East Cirque and walk around the North Side of the lake for easiest access. Angle your way around the bottom snowfield and trudge your way up the scree until you reach the first rock band. This is an easy Class 2-3 scramble for 20 meters or so.

Once on top, pick the path of least suffering up the scree to the bottom of the snowfield. Depending upon where you choose, this Class 2 scree slope is not friendly. Loose dirt and gravel are stacked at a 50-degree angle for a few hundred feet. 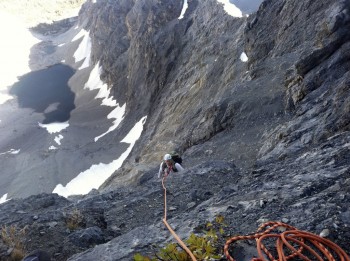 Once at the toe of the snow field, find a place to strap on your spikes. The slope is around 45 degrees and it is wise to bring crampons.

Depending upon snow conditions, an alpine ice axe could help. Hop the randkluft and get onto the face.

From here, the world is yours. At first sight, it looks like 80 percent of the East Face is 5.6-5.7 climbing, which is a good rating for the first 4-5 pitches. East Face Direct follows a dark water streak that passes just left of the top of the “Super S” as Kevin called it. The “Super S” is a large obvious fold in the rock strata that composes the lower right quarter of the East Face.

At any time, a team could climb sideways (off route) to the right or left a few hundred feet to avoid the more difficult sections. The direct route stays plumb with the top, following the dark water streak to find the best rock. 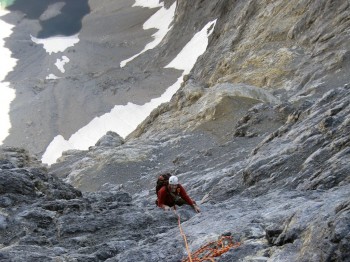 Because most of the climbing is 5.6-5.7, groups may choose to simul-climb many of the pitches. Teams that wish to set up a solid anchor every rope length could discover the route is close to 9-10 pitches. As with all mountaineering, speed is safety. Several Class 2-3 scree slopes divide the rock pitches. One short pitch was a solid 5.9 with a protection-less small overhang. It’s the finest part of the route. Once past the final headwall, put the rope away and enjoy the last 300 feet of Class 2-3 scrambling to the summit.