I ascended the NE Ridge and descended a snow couloir off of WNW Ridge. The map below shows the route.

I gained a lovely camp spot, maybe 7500’ and just less than a mile north of a “water tank” marked on the topo map. The sun was below the horizon when I turned my car sideways to the slope so that she would not be included to roll. Extraordinary work had been accomplished by farmers of yore who had built a complex of irrigation from the high valleys by channeling, valving, and directing this clear cold moisture to a very limited acreage of fields. Where I was parked at one such gate, directed a strong flow underground for a steep drop off the hillside. 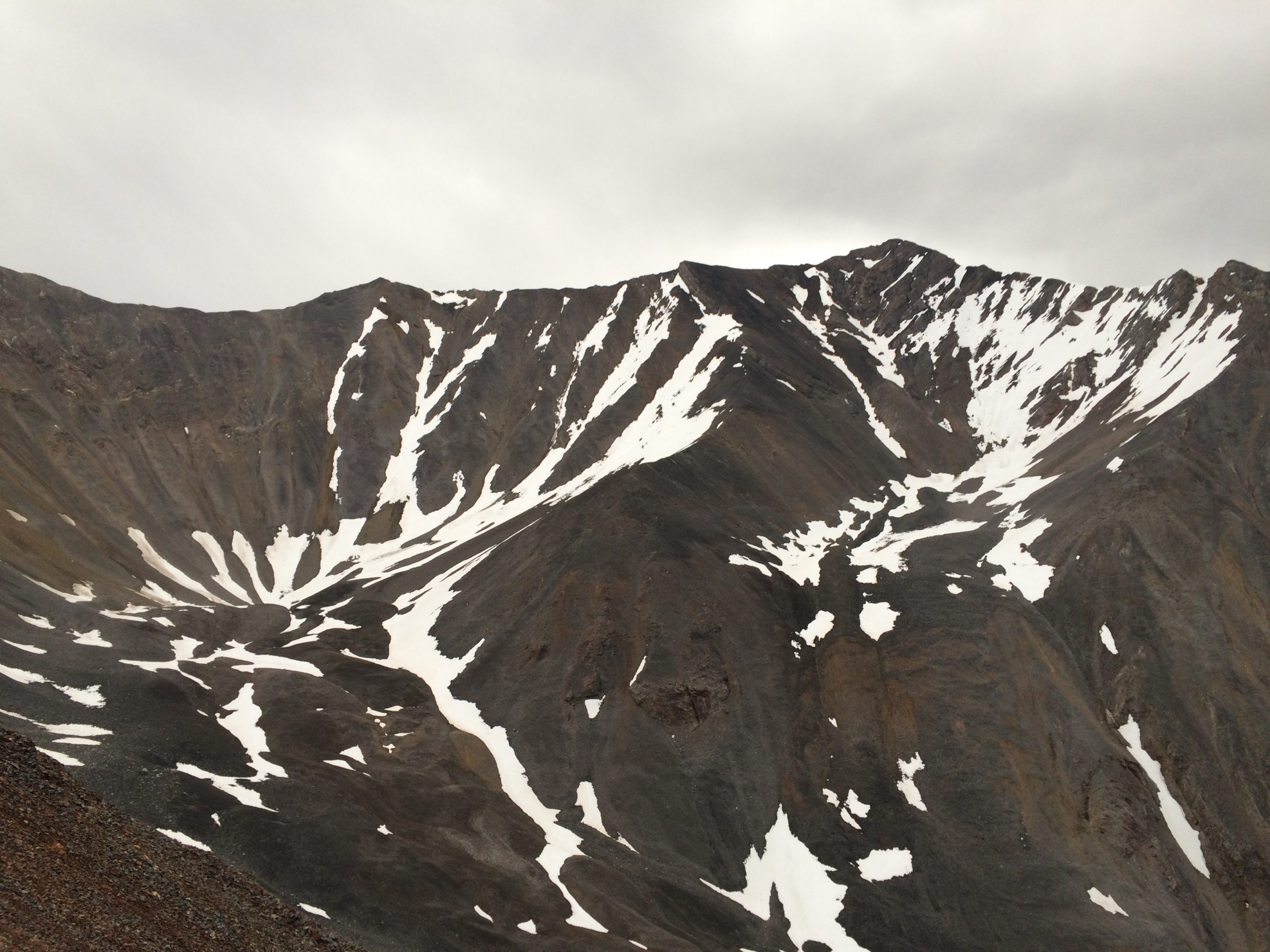 Traverse of Mt. Dickey and explore the sanctuary immediately north of the Peak

The clouds were sparse when I awoke at 2:30AM. At 3:22, I was moving by headlamp and full moon on a route that I had only scouted virtually. I paralleled the canal up to its containment on the gushing creek. Here the roar from upstream sounds as though the water is challenged to fall through there with enough violence to brook (sorry) no pedestrian passage.

I crossed to the north side of the creek and worked upward to a ridgecrest. My senses of topography were contained within the reach of a dull light in a bright night. I was perhaps 9000’ up on what I will refer to as Bristlecone Ridge* before I could make sense of the uncompromising nature of my direction of travel. I had gained so much elevation and the only logical direction was to progress eastward toward the apex of this long ridgeline to its logical apex, Pt. 10861.

This ridgeline is so significant when exploring the region north of Mt. Dickey that it needs a name thus the Bristlecone Pine label I have tagged onto it. If Pt 10861 were a destination peak, it’s east ridge would be its standard ascent route and its most notable feature, extending, as it does, for two miles. In reality, not only is this long, clean ridge unnamed but so too the massive canyon to its south and the very significant stream that flows from its mouth. This is the lower end of “Bristlecone Ridge” and it led me away from my two stated goals: to enter the base of the sanctuary beneath DIckey’s north side so I could scout for a snow route to the top AND in the event that failed, I could retreat up and SW toward the crest of the peak’s WNW Ridge.

At the end of my outing, I completed a loop that brought me back to Bristlecone Pine Ridge again from the moraine on S. Fk. Arentson. I can now see that the ridge is a practical way to enter the moraine if one does so early enough, maybe between 8200’ and 9200’. Above that, I found myself on a sky island with only one direction and outlet. I was now committed to Pt 10861. From there, my plan was to traverse the ridge southward over 4 more high points on my way to Dickey’s summit.

The first mile plus to near the final slopes of 10861 were very easy, a steady uphill grade with technical obstacles and almost devoid of all plant life. Then one encounters steep rock on the final slopes to 10861 and I skirted right. This put me in great exposure for a significant period of time. If I were to repeat the route, I would attempt to go right over the top. It couldn’t be any sketchier and I suspect the holds would be more reliable. There were a number of very steep scree sections that employed a cool head and 4th class skills to traverse below the ridge crest.

The distance along this ridge traverse is well over a mile and added to the 2 miles of “Bristlecone Ridge’ makes this line a ridgelovers dream. I don’t suspect many would want to turn about and descend the same way though and the beauty of the NW Ridge of Dickey as a descent is that it could lead one right back to the car at the end of the day. More on my descent route in time. The many tricky loose traverses on slidy loose limestone and shale and the significant airy ballet moves across thin crests mandates that one should not undertake this line without an abundance of skill and confidence. It is just too long a trip to belay, even occasionally.

As it was, I was alone in a spring low pressure system. Rain and clouds ebbed and flowed. I was motivated to complete my loop and hoped at every steep pitch that a way would be found to connect me to the next sub-summit. The goats lead the way. I didn’t see them but they have left faint traces across some of the dicier traverses. At the summit, I was relieved to see a reliable line to the WNW Ridge that would lead me back to my car. The summit of Borah was enshrouded but the valleys to the west were clearing.

I started down the WNW Ridge, however, after dropping to about 9800’, I was tempted by a steep but stable snow couloir dropping directly into the massive moraine basin NW of Dickey. It had been my original intent to explore this basin and so I took the opportunity to kick steps directly down this chute. I was faced in at first but soon I was plunge-stepping while facing out as the air was warm enough to guarantee that I wouldn’t encounter any ice just beneath the surface. Still the snow was consolidated enough that a small avalanche seemed inconceivable. Once I was back on loose rock in the moraine the going was slow and footing was dubious again but I was now at 9000’ with my sights set on goat trails that led toward Bristlecone Ridge at about 8400’. I named the ridge for these grand monarchs that dominate the upper end of the timbered zone and seem to speak to us about patience and acceptance over incomprehensible spans of time. 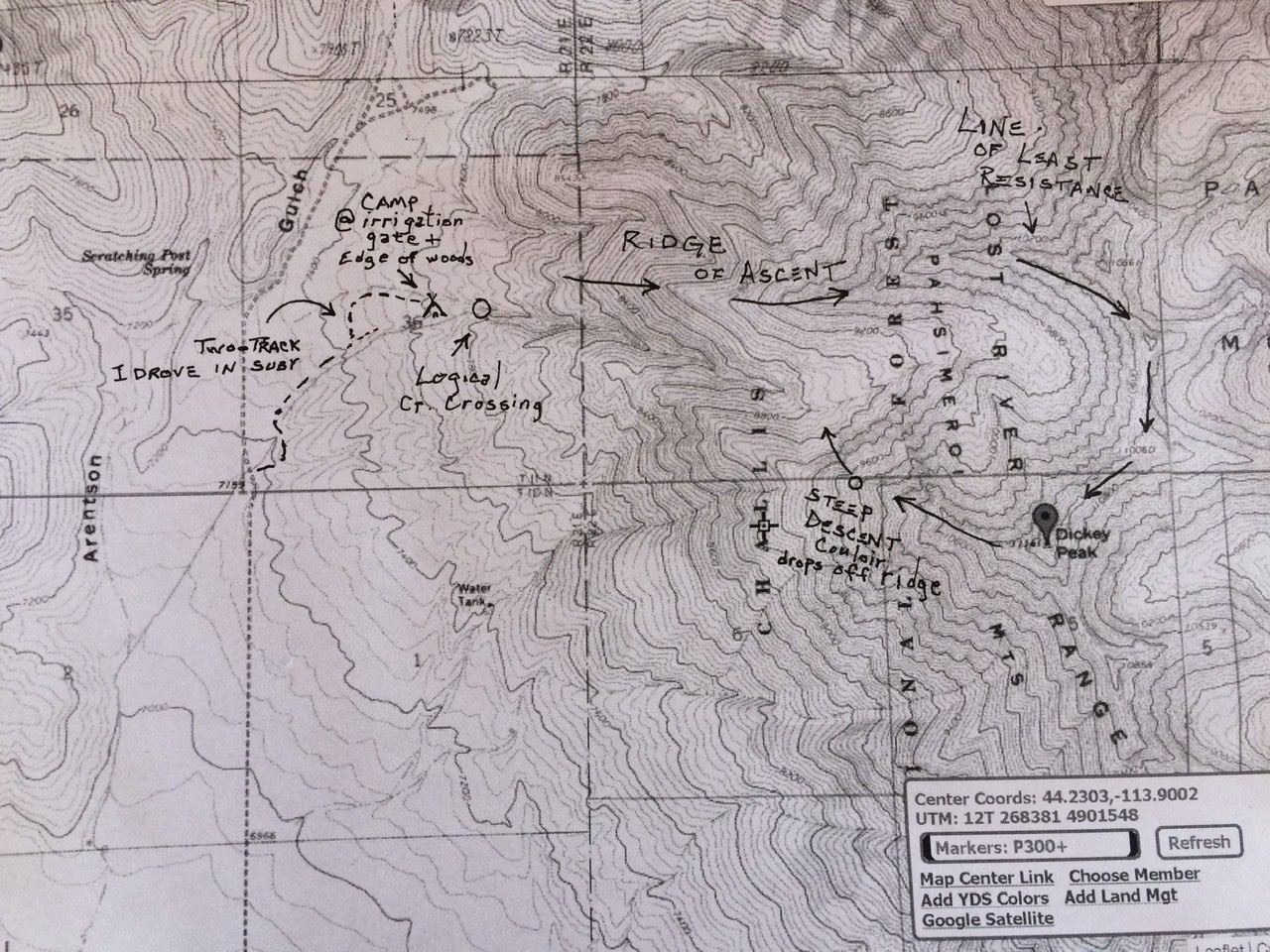