Mount Borah has a rich history and many key players from that history speak fondly of the Northwest Ridge. See Mike Howard’s history discussion at the bottom of the page. If you are interested in avoiding crowds, an approach that’s less than two hours, thousands of feet of hands-on easy climbing, all in a wild setting, you’ll discover that the Northwest Ridge is the funnest and best route on the peak.

The Northwest Ridge ascending from left to right. Bob Boyles stitched two Thierry Legrain photos together to make the panorama. 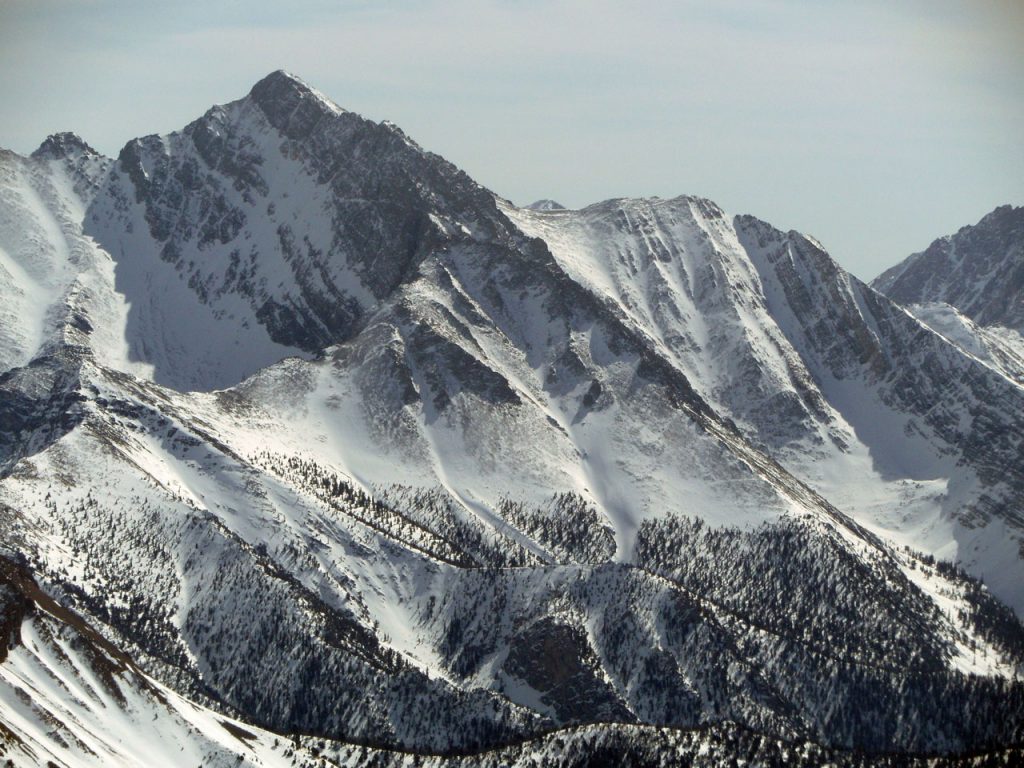 The Northwest Ridge rising from bottom right to upper left. Chicken-Out Ridge is in the background. Mike climbed the left/east spur while Vaughn Howard climbed the right/west, meeting at the Y. Both spurs rise up from Rock Creek and are very prominent when viewed from the right location. The East Spur overlooks the NF whereas the West Spur keeps Chicken-Out Ridge in view. John Platt Photo

The Northwest Ridge has been climbed in Winter and would be a grand adventure for anyone aspiring to be an alpine climber. In late Spring (April/May/June), the route would have Styrofoam snow drifts in the low spots. The ideal season is Summer and early Fall (July/August/Early September) because the route is free of snow and is in the shade (cooler temps) until noon. Don’t count on water being available in the creek after late July, so 2 to 3 liters of water are recommended.

Begin at the Mount Borah Trailhead Parking Lot at base of the Southwest Ridge. Hike up the trail for 30 minutes or so until you reach the first saddle at 8,700 feet. At this point, leave the main trail and hike cross-country north by northeast heading downhill. After 10 to 15 minutes a steep ravine (slope) will tell you that you’re on the right track. Before dropping down the steep slope, hike right/east along the lip until you find a game trail that drops down to the creek bottom. Hike up the creek bed until you reach the confluence of two seasonal creeks. From the confluence, you should be able to see Chicken-Out Ridge at the very top of the canyon and see the bottom apron of the Northwest Ridge leading up to rock outcrops above tree line. Head uphill, keeping the Chicken-Out Ridge drainage on climber’s right, past the tree line, and climb exposed rock starting at 9,400 feet to the summit.

Most of the Northwest Ridge is Class 3 scrambling with intermittent rock climbing (much like Chicken-Out Ridge, but for several thousand vertical feet.) When there is technical rock climbing, it only lasts for 10 feet or so, and even then it’s easier than 5.5 and there are scrambling options around the technical sections. Expect multiple false summits, lots of scrambling, occasional down climbing, and some short steep rock climbing. It would be difficult to find anything harder than 5.5 climbing. All spires can be skirted to the right/west. Several times you might be intimidated by a steep wall of rock far above but, as you get closer to it, solutions present themselves. Much of the rock is solid and full of handholds once you clear away loose surface gravel. Expect every gully to be full of loose cobblestones.

Long sleeves and pants are recommended. WEAR GLOVES WHILE CLIMBING. The texture of the rock is sharp and more abrasive than a pumice stone. Abundant low angle (some slab) climbing and the rock doesn’t lend itself to protection very often. For the above reasons, a rope is not recommended for climbing the Northwest Ridge. For most technical climbing parts, there is always a side pull available, but it might come off in your hand. The bigger the rock you’re using, the better. It’s best to pull straight down on rock in the Lost River Range and stand directly on top of any foothold.  Rock climbers that can lead 5.9 will enjoy the Northwest Ridge. This route has a lot of loose rock, so wear a helmet and avoid large groups of people. Leave the rock climbing shoes in the car; approach shoes are perfect for this all-day climb. 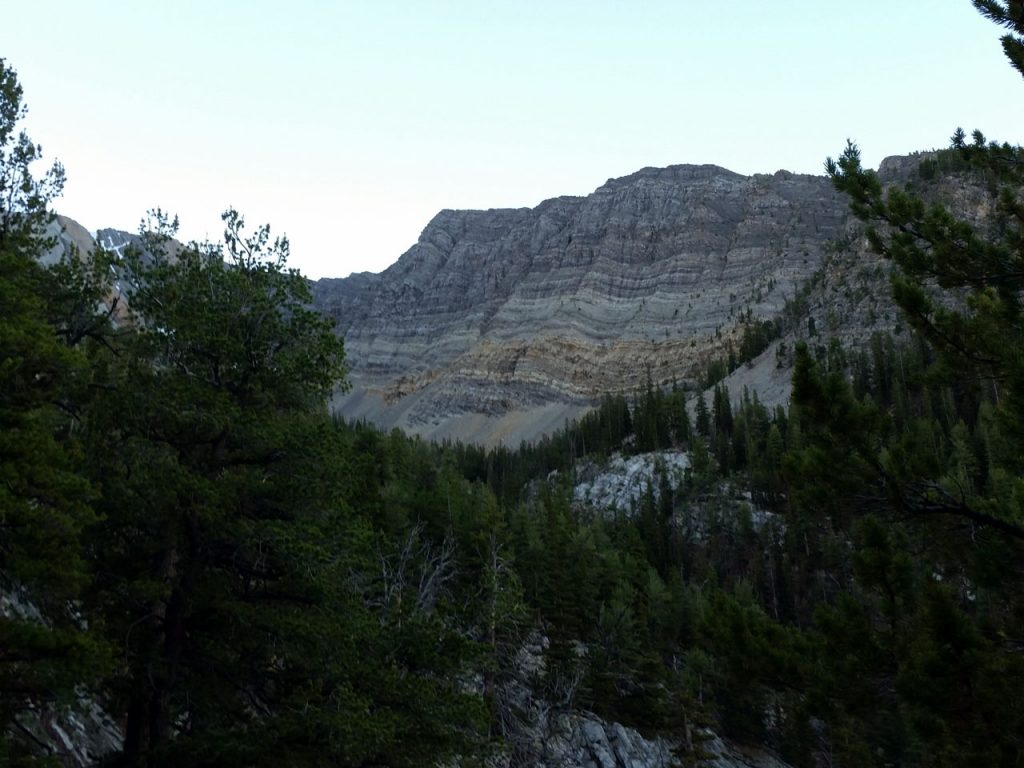 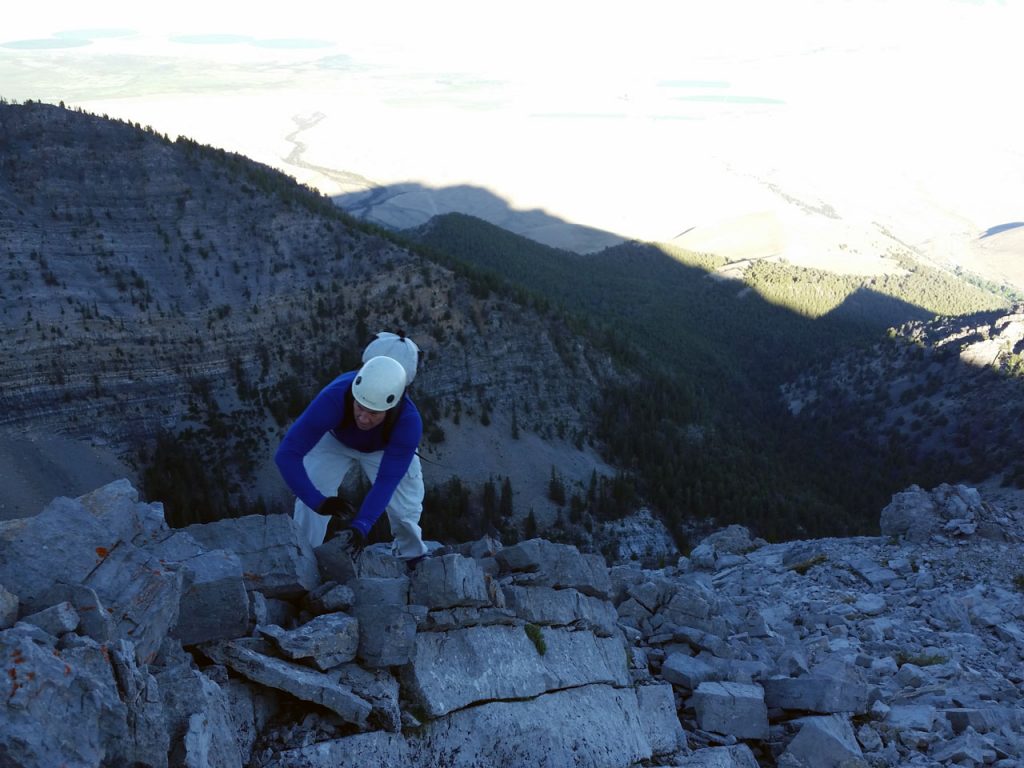 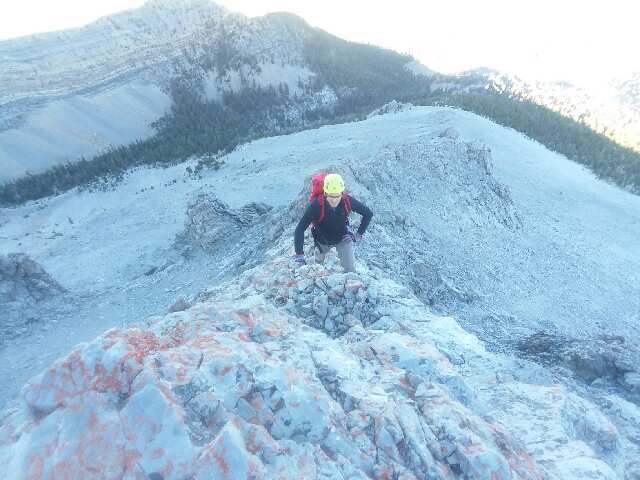 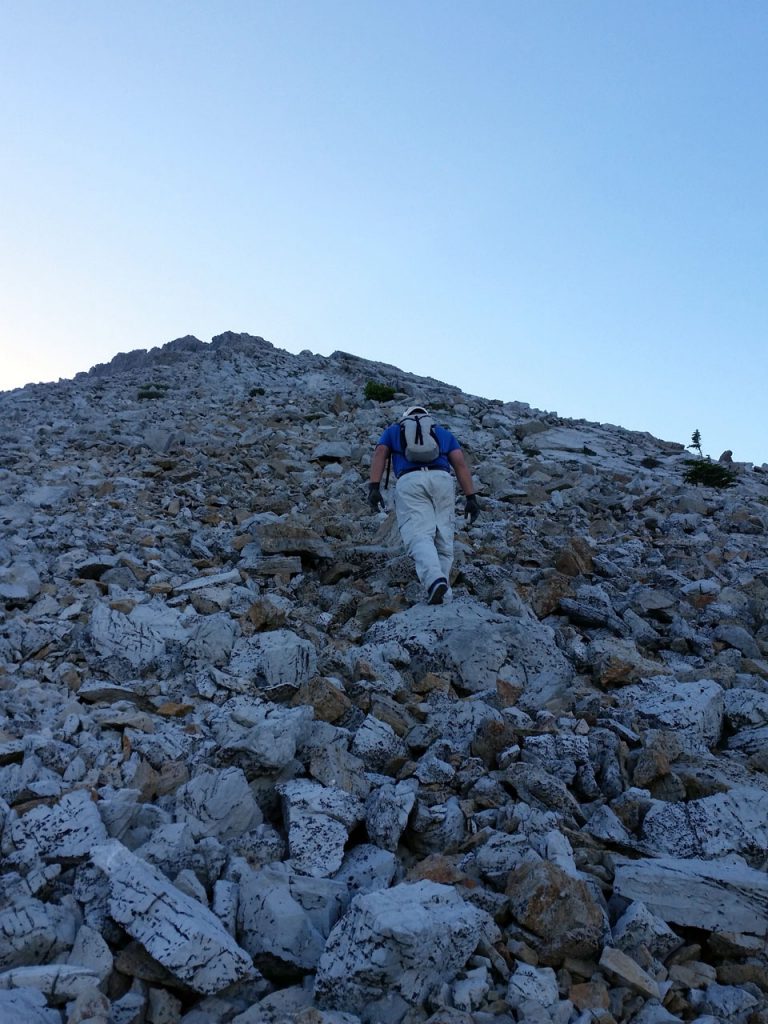 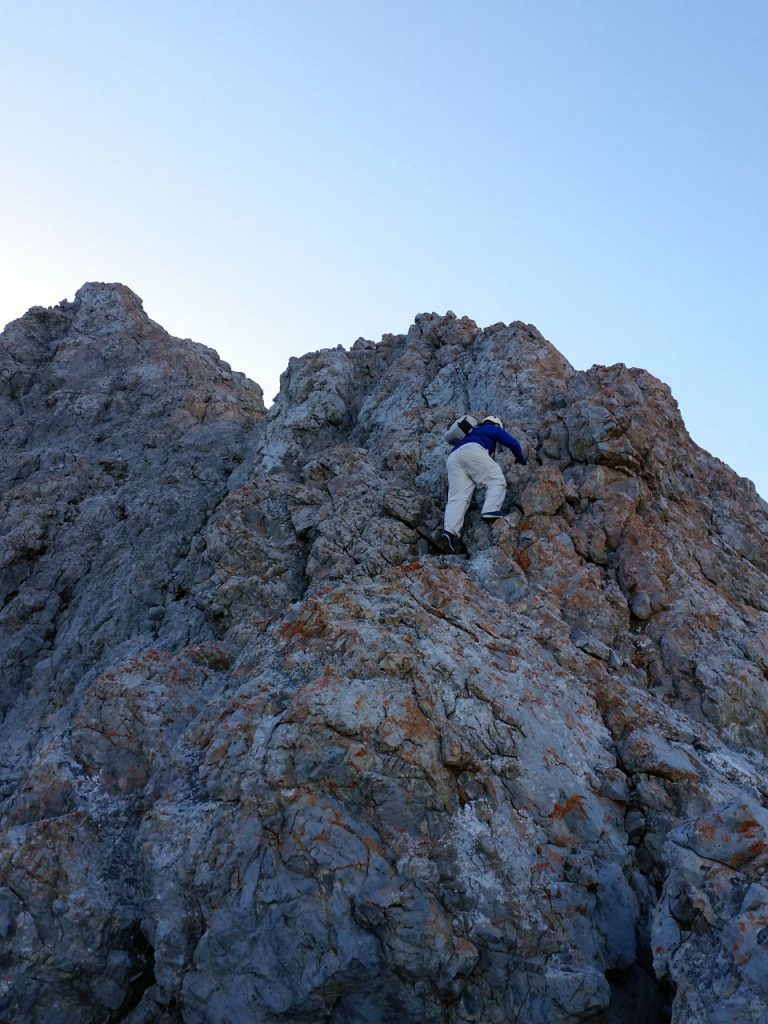 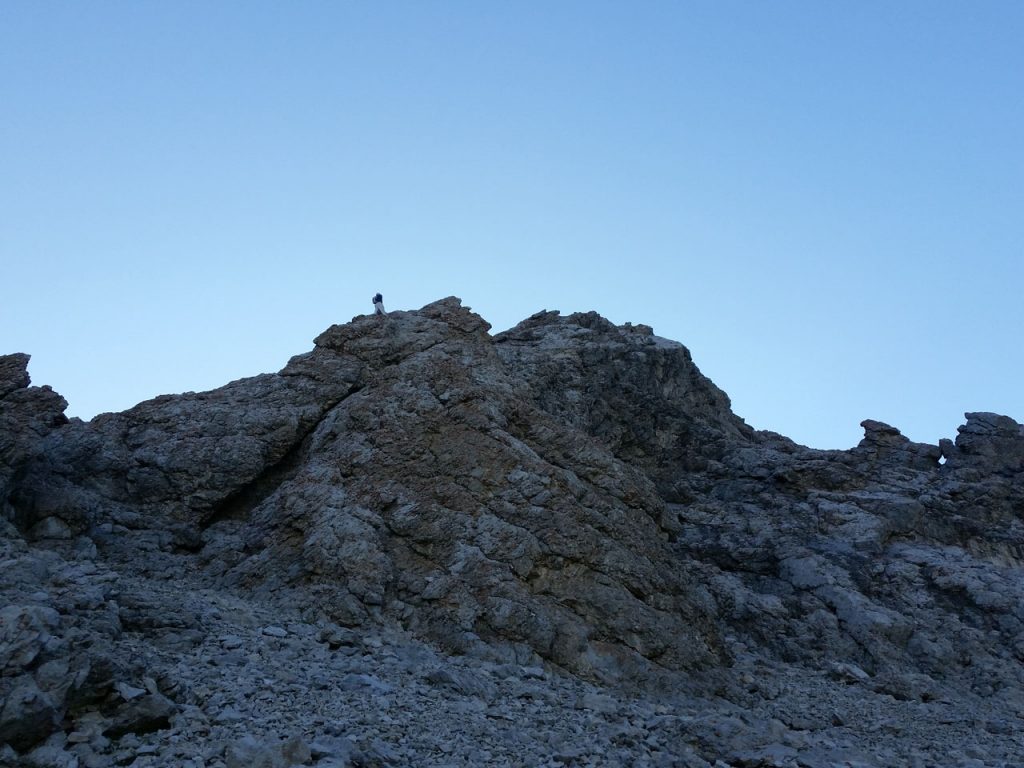 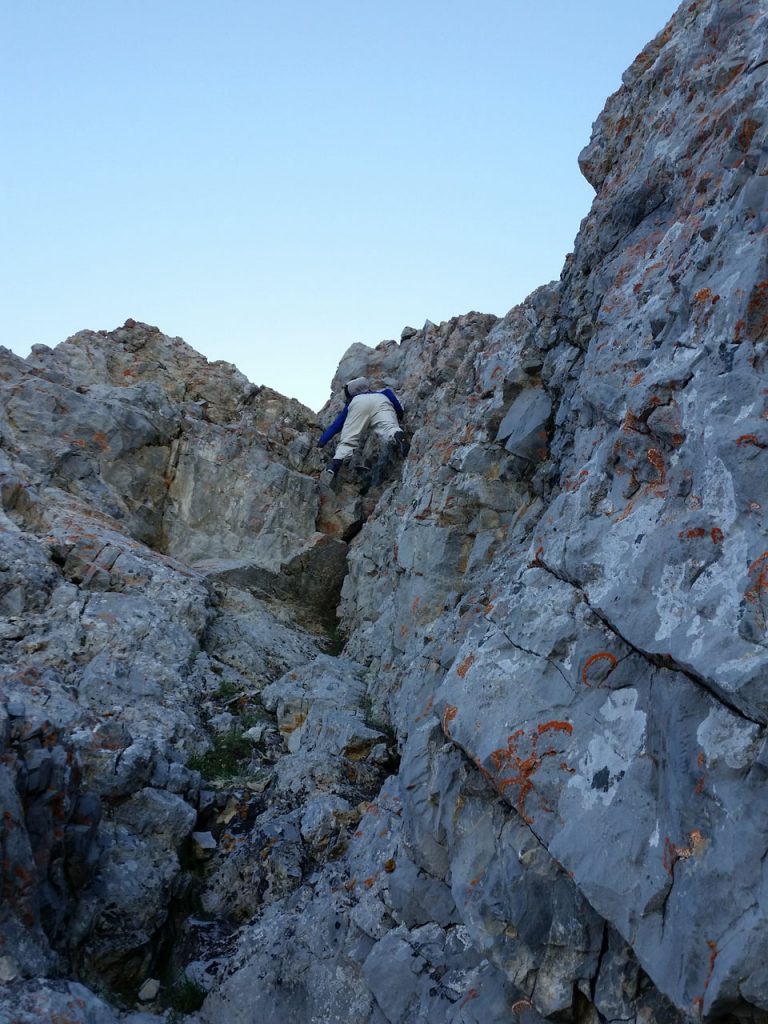 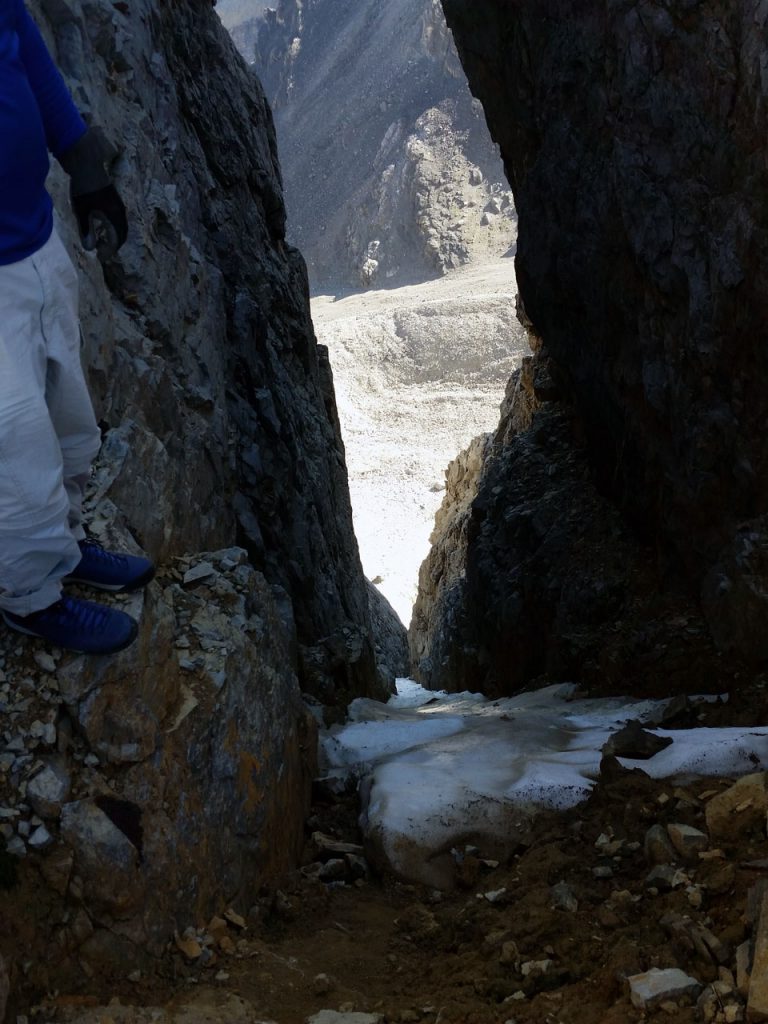 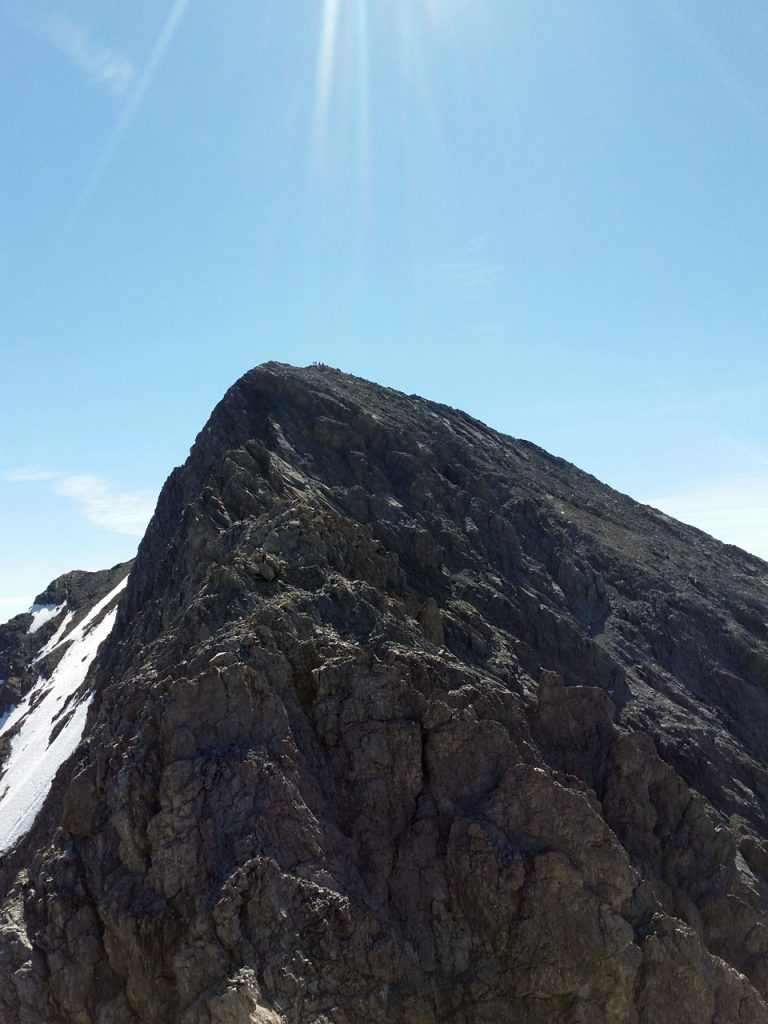 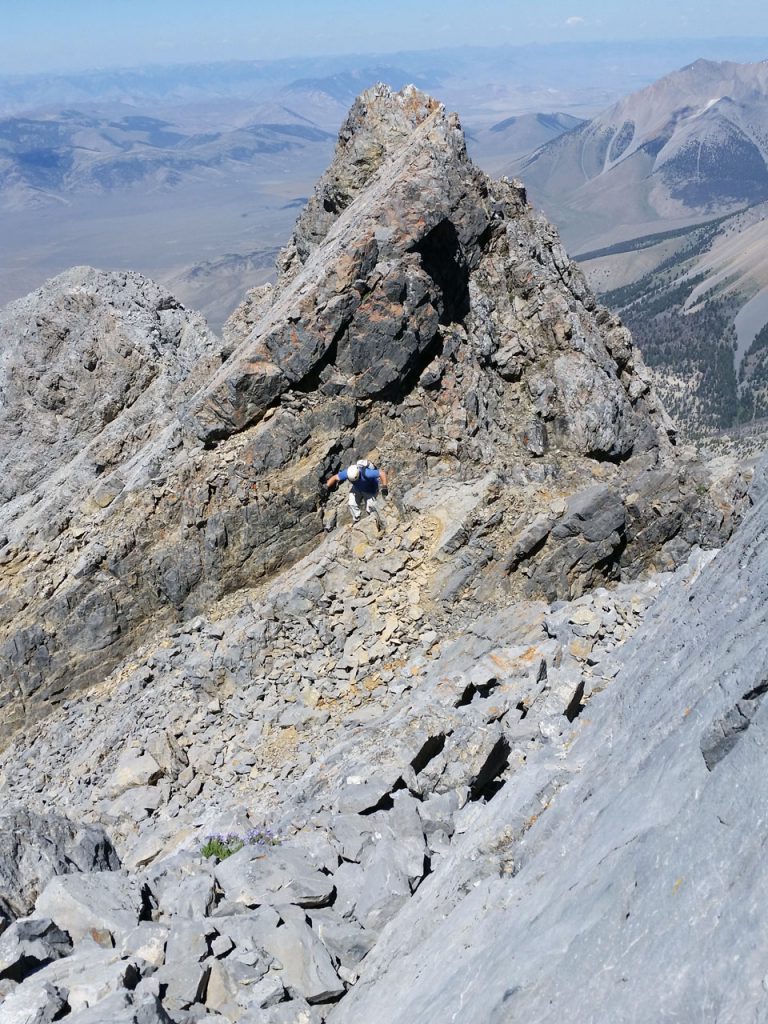 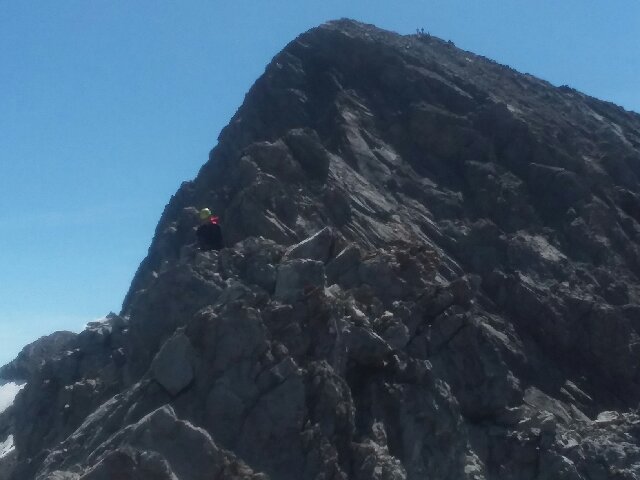 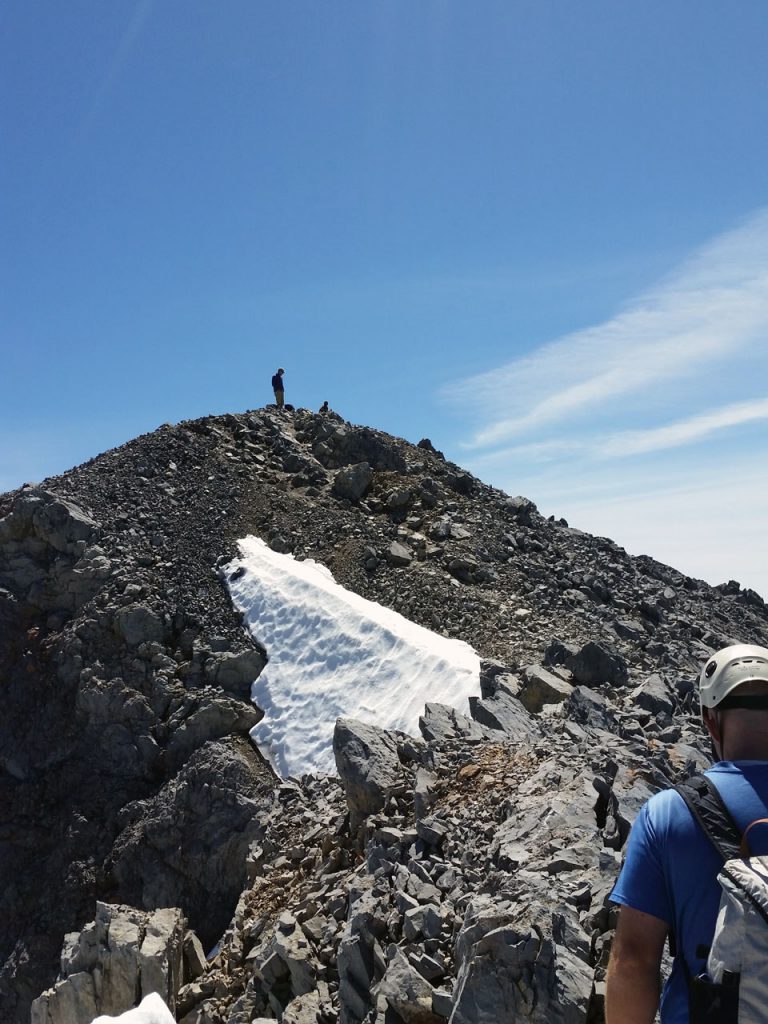 “Hey! Where’d you guys come from? You know there’s an easier way up here. You guys are nuts!” Overheard from the summit. Thierry Legrain Photo

Lyman Dye and I started up it in 1971 but had route-finding issues coming out of Rock Creek and made it above the traverse saddle before running out of time. I had heard of a possible ascent by Bill Echo but never had it confirmed by him.

In December 1976, Vaughn and I climbed to the pass between Rock Creek and the West Bowl. This bowl lies below you when you climb the Southwest Ridge. From this pass, we climbed the Northwest Ridge and then descended the West Face into the bowl and out to the present parking lot. It was a cold but beautiful day. While climbing the ridge, we talked about using the same approach to drop into the North Face Bowl.

Before you get to the current trailhead, the road comes around a point of the foothills. We parked our car at that point and climbed up the foothills into the West Face drainage. By keeping to our left, we could basically skirt the lower part of the face. From this point, Von went to the right which goes up into the West Face and I went to the left. We meet above at the Y, the point where these two ridges come together above the traverse saddle. We continued from that point together on up over the summit and then descended the West Face coming down through the West Face Bowl and back out to our car.