Wes Collins of the Butte County Sheriff’s Department reports that he has responded to 3 Search and Rescue events on Mount Borah involving climbers who got lost or stranded after attempting a bypass of Chicken-Out Ridge (COR). All of these climbers reported that they heard about a shortcut that avoided COR and tried to follow it. Collins believes that the Custer County Search and Rescue team has responded to several more incidents involving the purported shortcut. The photo below shows the route over COR in red and the approximate route of the purported shortcut in yellow. 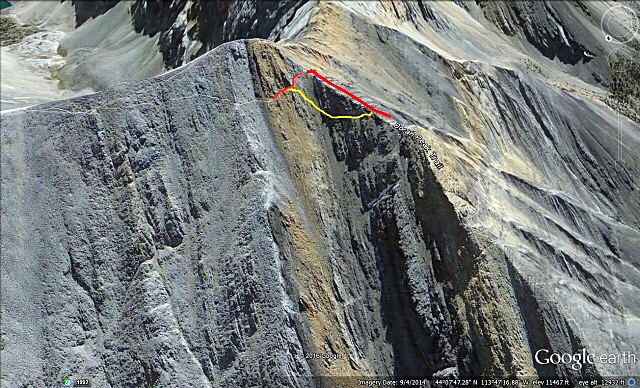 This photo shows the Standard Route over Chicken-Out Ridge in red and the purported and dangerous shortcut in Yellow.

Collins states, “The shortcut doesn’t save any time; it only avoids the small rock obstacle above the saddle. If there is hard snow in the chute or no trail cut across the snow, it can be extremely dangerous without a rope. To top it off, it is creating another ugly braided trail on the mountain.”

Collins further notes, “Some hikers who have made it to the top or even past the Chicken-Out saddle can be very susceptible to any notion of an easier way off the mountain.” He continues, “It can be difficult to express the danger of following this shortcut across to inexperienced climbers but I’ve found that asking questions that make them think and a little respectful bluntness usually does the trick, especially if you can talk to the leader away from the pack.”

The most recent SAR response took place in July 2016. Collins summarized the rescue. “In this case at about 11:00PM, one of the adults was able to make a phone call at about 9,700 feet just above the first scattered alpine trees in the cirque below the west side of the peak. He was able to describe where he was and told me that the group only had one headlamp and a small flashlight. In talking to him about the shortcut, it sounded like he misunderstood the directions and went down toward Rock Creek. I can’t believe anyone who has taken that drainage would call it a better way to the bottom. As Bob Boyles has said, “It’s a long ways back to your rig after making an ascent of the North Face.”

In Sum: Do not attempt the shortcut!