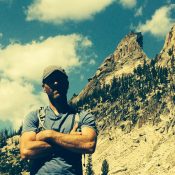 I remember the first time I ever saw Warbonnet Peak. Both first times. The very first time was a photo in Idaho: A Climbing Guide. The photo (by Lyman Dye) showed the East Face and the Southeast Face Routes. Warbonnet arced across the photo like a cresting wave of overhanging faces and corners. The summit pitch was a ridge so narrow you could straddle it. It was like seeing a shark fin cutting through water. Your heart pounded at the majesty and at the threat. With no protection available on that smooth fin, a fall would leave you spinning helplessly under the overhanging face, 1,500 feet above the valley floor. The only way to rescue yourself would be to try and prusik up the rope until, presumably, you pulled your partner and their chockstone belay off with you.

Warbonnet’s Southeast Face Route starts in a narrow saddle 1,000 feet up onto the Verita ridgeline and takes a wandering line across then up and finally out, out, out onto that shark-fin ridge. The pitch is only Class 5.6 but there’s no protection in the entire pitch (a bolt was recently added after the crux, but traditionalists will eschew it). The crux is a step-across from a gunsight notch onto the side of the actual summit fin proper. From this grotesquely-exposed slab, it’s easy climbing up to gain the ridge. The ridge starts as wide as a sidewalk but narrows to less than 12 inches at the tip. If the wind is low and your stomach can handle it, you can balance or scoot all the way to the summit tip and ride it à cheval.

The Southeast Face Route is only Class 5.7 but once you’ve climbed in the Sawtooth Range, you know better than to get cocky. I printed off the only route information I could find and carried it around in my pocket like a talisman until it disintegrated to soft lint after months of folding and re-folding. The beta was almost illegible, scrawled in tiny letters and scanned at low resolution, which only enhanced the feeling that the route was committing and you needed to come prepared both mentally and physically.

Sawtooth climbing has a long tradition of leaving very little trace. Almost no fixed gear, anchors or bolts exist. Frequently, this also includes leaving no beta. Nearly every peak and spire in the Sawtooth Range has been climbed at one point or another, yet relatively little information exists. Thus, most climbing in the Sawtooths requires more than just physical strength. You need guts. You have to practice the fine art of “not giving up.” I practiced “not giving up” by coping with year after year of frustrating setbacks.

First, it was finding a partner who shared my humility and reverence for this piss-easy moderate route. Then it was injuries. Another year, the weather wouldn’t cooperate. One year we were driven out of the mountains by wildfires that drifted so much grey ash down on us it looked like it was snowing in July. But I wanted this summit. I wanted it the way you want the prettiest girl in school, the girl you make deals with the universe for. So much of alpine climbing revolves around discovering your true character. If something in your character is underdeveloped, the mountain will pluck that weak string until it gets strong enough. Warbonnet Peak taught me penitence and patience.

In 2014, I finally saw Warbonnet in person–my second first time. Two friends and I hiked into the Sawtooths for an easy backpacking trip to condition our legs. We scrambled to the top of Reward Peak where we could see almost the whole Sawtooth preserve in 360 degrees. As I turned circles on the summit admiring the view, I gasped in surprise. I hadn’t expected to see it. I wasn’t even carrying my talisman beta that day. But there, miles away across a maze of crumbling ridgelines and saddles, was Warbonnet Peak. The curved summit fin streamed out away from the ridgeline like a petrified plume of smoke.

Forsaking any premise of moderation or patience, we immediately stumbled and sweated across the trail-less Goat Creek drainage and dropped into Feather Lakes, where we camped only a few miles away from Warbonnet, beneath the jagged Monte Verita spires that towered above our puny camp like the nightmare of a breaching Leviathan. Staring up at Warbonnet as the setting sun fanned out behind it, I knew this was the year I was finally going to climb it…and I was scared shitless.

[Editor’s note: This is a story of perseverance and personal growth earned by setting a goal and then completing the task. Brandon completed the climb, overcoming his fears and conquering the shark fin or should I say he conquered his fears and overcame the shark fin?]