Ken Jones just completed all 100 Idaho P2k summits when he climbed Grave Peak on September 28th. He is the first person to finish this list. Climbing every peak on this list is an impressive accomplishment which takes an incredible amount of determination and support. 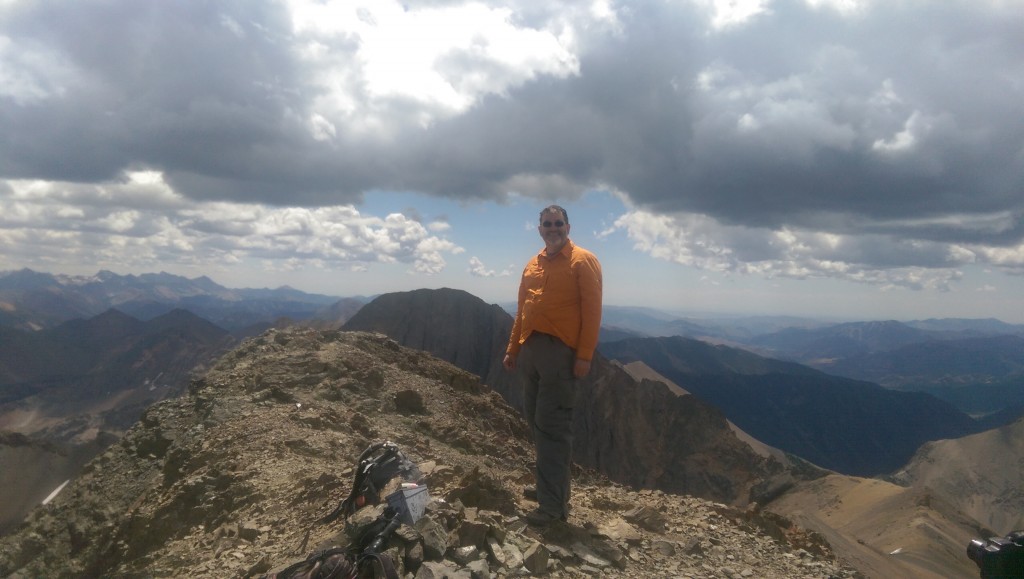 Ken notes that: “Although far too many of the hikes were, in fact, done solo, I can honestly say that I never could have done it alone. I’d like to take this opportunity to say thanks to all who hiked with me or provided information that helped me find a decent summit route”

“First off, thanks to my wife Karen for hiking with me on some of them and for encouraging me to pursue the list rather than complaining about the time I spent away from home. Thanks also to my sons Evan and Colin for their company on some of the peaks (before they grew up and moved to graduate programs too far from home to spend their free time hiking in Idaho).

I would especially like to thank Dennis Poulin for joining me for many of these peaks even when they were my priority but not his (especially, I think, a long day last month on Sheep Mountain), and Ryder Irvine who joined me for many (including an off-trail slog through brush, rain, wind, and eventually snow on Moose Creek Buttes on my birthday this year).

Thanks too to others who’ve hiked with me in Idaho. I hope I don’t overlook anyone and apologize if I have: Bob Packard, Dean Molen, Greg Jagielski, Kadee Smith, Victor Zhou, Roger Williams, Dan Robbins, Andy Martin, and John Hamann.

I cannot close without thanking Tom Lopez for his Idaho: A Climbing Guide book, without which I would have been at a loss many times for the best approach to each summit.

I encourage anyone with any possible interest in this list to give it a try. I can recommend a few peaks as particularly delightful, and others as particularly challenging. Just let me know what you’re looking for!”

When he was asked about the difficulties involved in completing the list, Ken wrote: “Andy M asked me about which peak was the most technical on the list. I would say that nothing gets beyond class 3 and I don’t recall using a rope at any time (and as those who’ve hiked with me know, if I didn’t use a rope not many people would). He also asked about which peak might have the toughest access. If by that he meant getting permission to cross private property then that’s not a discussion I want to have in public. But I will say that I avoided long access hikes to more than one summit by flying in to a back-country air strip to shorten a backpack. I don’t think I’d done that since Denali. Without the flights, someone who hikes at my pace might have taken a week to get a single peak in two or three instances.”

Ken, along with Bob Packard, was the first to complete all of Idaho’s county highpoints.