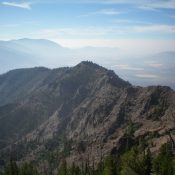 Peak 8820 is a rugged, rocky summit that is located west of Pass Creek Road, just past The Narrows of Pass Creek. It towers over Mill Creek to its north. The south face of Peak 8820 is cliffed and is quite intimidating. I doubt that too many climbers have stood atop this peak. USGS Methodist Creek 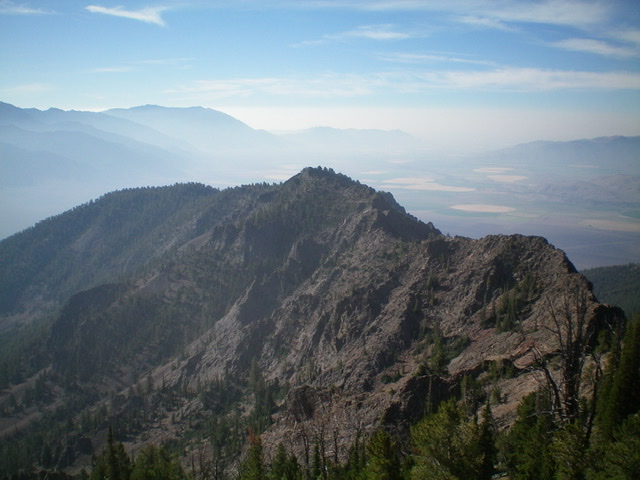 Pass Creek Road/CR-122 is located along US-93 south of Mackay and is signed as 3900W. This junction is exactly 7.4 miles south of Main Street in Mackay and 18.3 miles north of the junction of US-93 and US-20 in Arco. Turn north onto [signed] Pass Creek Road and drive 6.9 miles. Park in a small pullout on the right side of the road just after exiting The Narrows and immediately after crossing to the right/east side of Pass Creek. Park here (6,485 feet).

From the pullout, walk a short distance down Pass Creek Road to where the road crosses to the west side of Pass Creek. Leave the road here and bushwhack west briefly on the left/south side of a split-rail fence (which separates public land from private land to the north). You quickly reach a willow-clogged drainage. Fina a cattle trail about 50-70 feet upstream to get through the willows. Once on the west side of the tiny drainage, you are at the toe of the east ridge. Scramble steeply southwest up a sagebrush-covered shoulder/ridge and continue to follow the ridge southwest then west to enter a pine forest, or at least the edge of it.

The narrow, rocky ridge crest now has dubious rock on both sides and fierce exposure to the left/south. At 8,400 feet, the ridge bends left-ish again and is now heading southwest. At 8,700 feet, the ridge flattens and turns right-ish/west. The rocky summit is not far away but the choppy ridge crest is the crux of this route (Class 3). Work your way around several ridge towers with krummholz and blowdown thrown in. In addition, the talus/scree is quite loose and steep. Stay just below the towers on their right/north sides on fragile, loose talus and crumbly ledges.

Make a final climb back up onto the ridge crest and scramble west on its narrow top to reach the small, rock-and-bush/scrub ridgeline summit of Peak 8820. There is a small cairn on top. When you descend the ascent route, the terrain high up will try to pull you left/north onto false ribs/aretes. Resist the temptation and stay to the right/east to avoid getting off course. Keep descending the ridge in a rightward/eastward direction until you reach the thicker, flatter pine forest below.

Since you are initially skirting the left/north side of the summit ridge towers, your visibility is limited. Consequently, you might miss the rightward bend in the ridge as it descends back down to Pass Creek Road. So be vigilant in this section. The talus/scree slopes and chutes up high are wickedly loose and unforgiving, so do not wander off course. Once you are back on the ridge crest and you regain visibility, it is easy to stay on course. 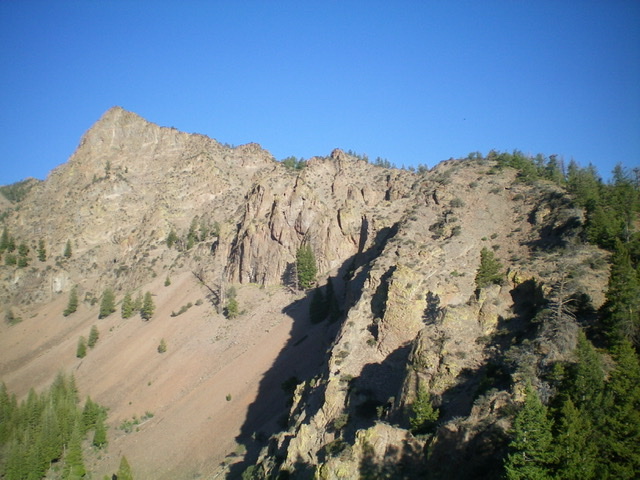 Midway up the rock-and-forest terrain of the east ridge. The ridge bends left to reach the summit. The south face (left of center) is sheer so the ridge is airy. Livingston Douglas Photo 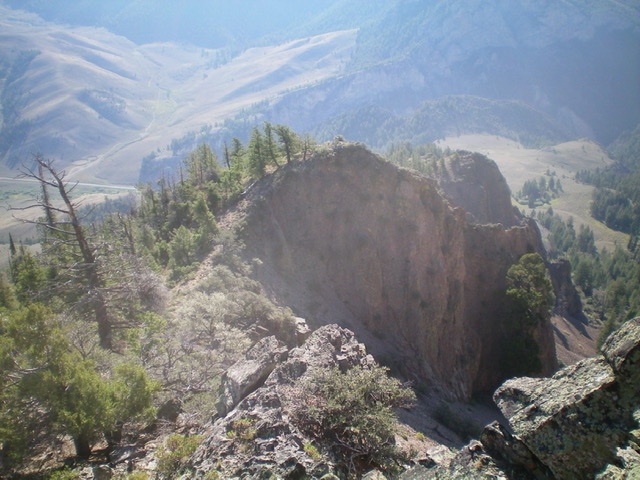 Looking down the east ridge to the top of its forested section. The exposure in the forest is wicked but is easy to avoid. Above tree line, it is not. Livingston Douglas Photo 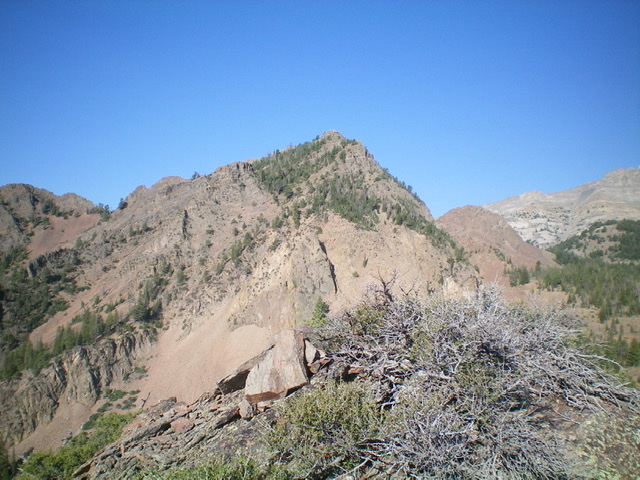 The summit of Peak 8620 with Peak 9524 in the distance (dead center). Livingston Douglas Photo 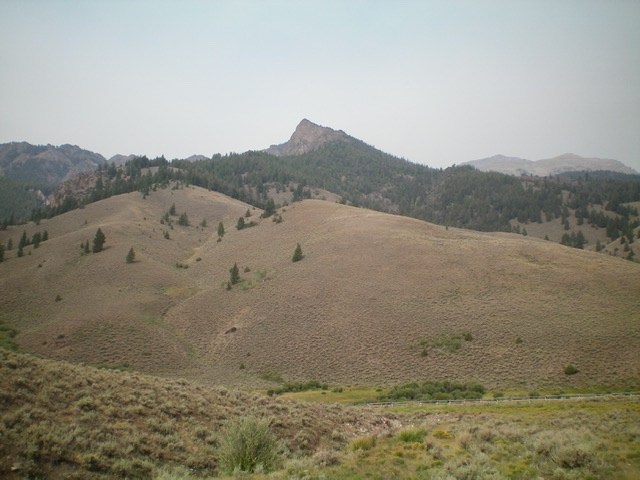 Peak 8620 (pyramidal pinnacle in center) as viewed from near Pass Creek Road. The ascent route climbs up through the sagebrush hills (left side) to reach the forested ridge, which heads right and then turns left to climb to the summit. The right skyline is the upper east ridge. Livingston Douglas Photo