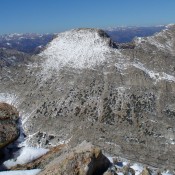 This peak is not in the book. Judi Steciak, Carl Hamke and Derek Percoski have provided the route information found below. Also, use the link below to read Rick Baugher’s trip report. Updated August 2019

Andromeda is located on a rugged ridge that includes Pegasus Peak and Altair Peak. Pegasus sits between these two peaks. USGS Standhope Peak 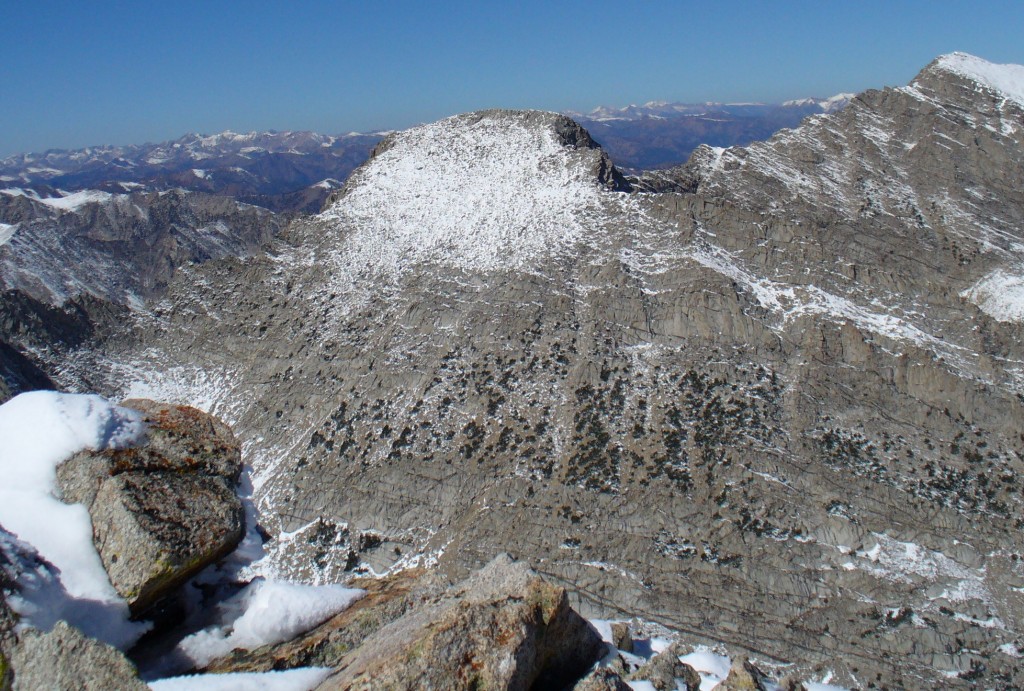 Andromeda is located just less than a mile north of Altair Peak. Ascend the South Face from the Left Fork of Fall Creek. The route up the face threads through slabs and cliffs to easier slopes and the narrow summit ridge.  It is also possible to climb towards the saddle between the two peaks and follow the east side of the South Ridge to the summit. One of Rick Baugher’s signature film-cans was found on the summit, but moisture had made the paper record illegible.

Hike up Surprise Valley until you’re directly in line with the summit. Alternately, you can reach this point from the Broad Canyon trailhead, by taking the trail up and over the Altair Peak/Standhope Peak saddle. This would be difficult to tell without a modern gadget, so if you’re not using one I’d advise bringing the route photo. Ascend the gully directly up the West Face as shown in Photo 1. 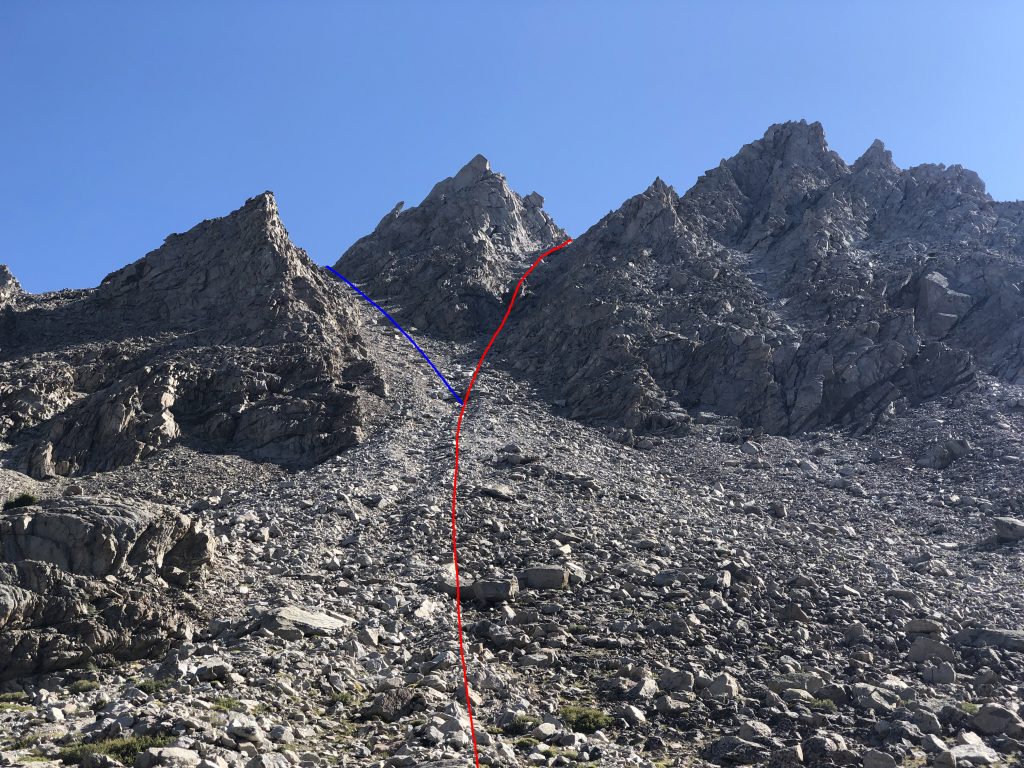 At the fork, I chose to go right (red line) and do more scrambling. The most difficult spots I encountered involved committing to a 5-foot ledge. Around 11,200 feet, I chose to veer south for a more direct path to the summit, but you could also proceed to the top of the gully and work your way to the summit from there.

Going left at the fork (blue line in Photo 1) would continue on the Class 2+ type terrain, and once you reached the ridge crest you would have to down climb a bit to skirt around the east side of a tower as shown in Photo 2. 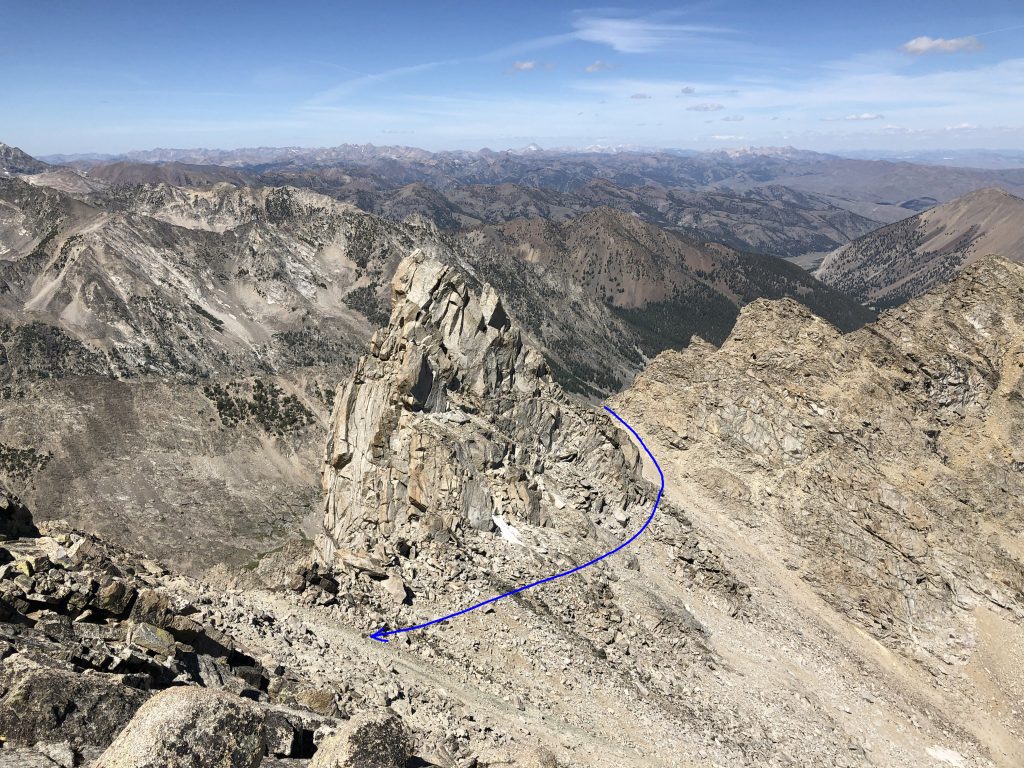 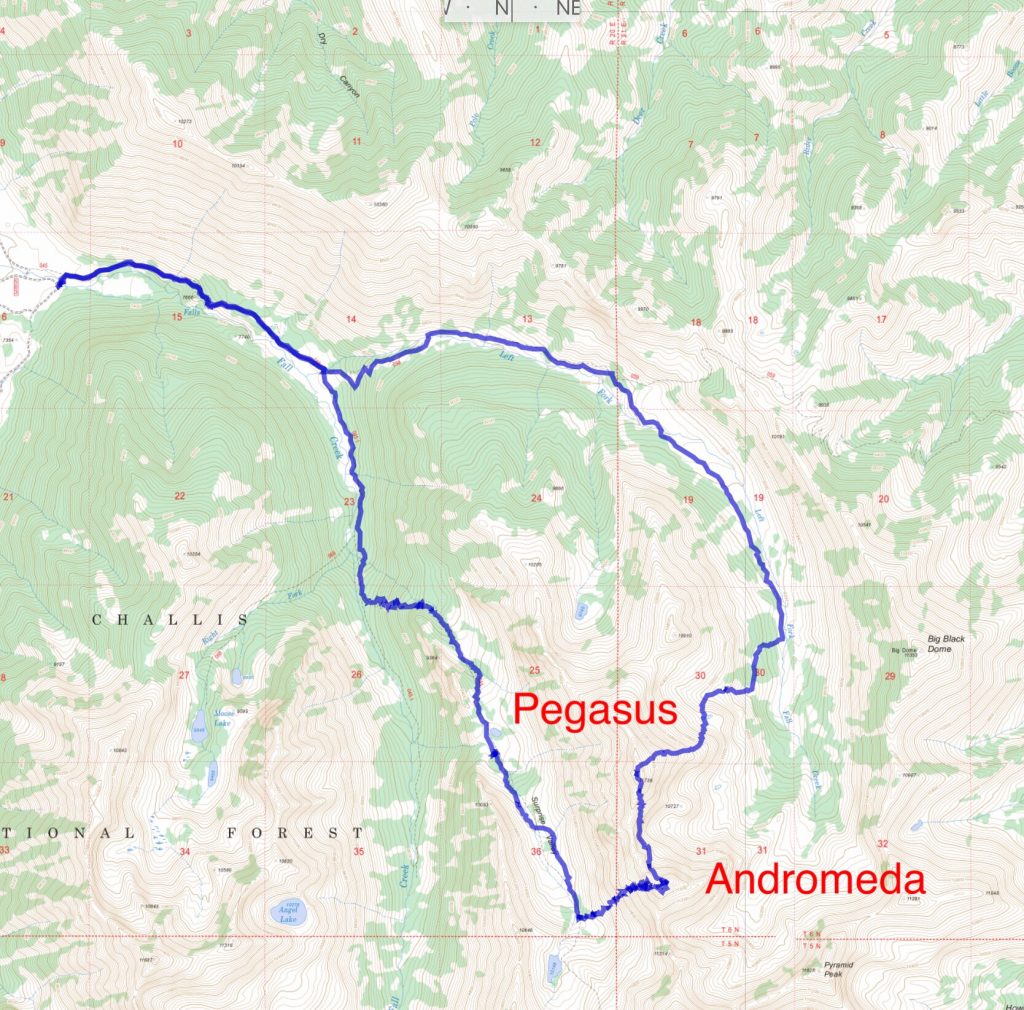 Derek Percoski GPS track for his traverse of Andromeda and Pegasus. This loop covers 16.0 miles and 5,500 feet of elevation gain.

In my opinion the West Face of Andromeda is the best way to climb that peak. Solid rock, nothing sketchy, and cuts off two miles each way compared to the South Face Route. It’s also a great opportunity to make a loop and experience more of the area, by approaching from Surprise Valley and exiting via Left Fork Fall Creek.

In August 2019, I traversed between Andromeda and Pegasus Peak using two opposing faces rather than the ridge. The routes I used to connect the peaks were nothing special, but it’s doable for a climber willing to make a long day out if it.

The North Face of Andromeda is passable just east of the North Ridge, though the route involves a lot of loose dirt and is not recommended as an ascent path. The remainder of the North Face provides solid rock but is of unknown difficulty.

In August 2019, I traversed between Andromeda and Pegasus Peak. The route I used to connect the peaks was nothing special, but I think the West Face of Andromeda is the best way to climb that peak. Solid rock, nothing sketchy, and cuts off two miles each way. It’s also a great opportunity to make a loop and experience more of the area, by approaching from Surprise Valley and exiting via Left Fork Fall Creek.