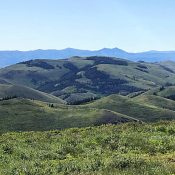 This peak is not in the book. Updated November 2019

Badger Mountain is a hidden mountain that is tucked in an area between Trapper Creek and Cold Spring Canyon. While the mountain itself is a gentle giant in many ways, the southeast ridge is a magnificent climb, one of my favorite ridge climbs in the South Hills. It begins at the Phantom Falls Trailhead and is an entirely off-trail climb. Beware the domestic sheep that graze right on the expansive summit. The sheep dogs might bother you, as they did me, when I reached this summit. The standard ascent route is from a jeep road in the Trapper Creek drainage to the north. USGS Trapper Peak 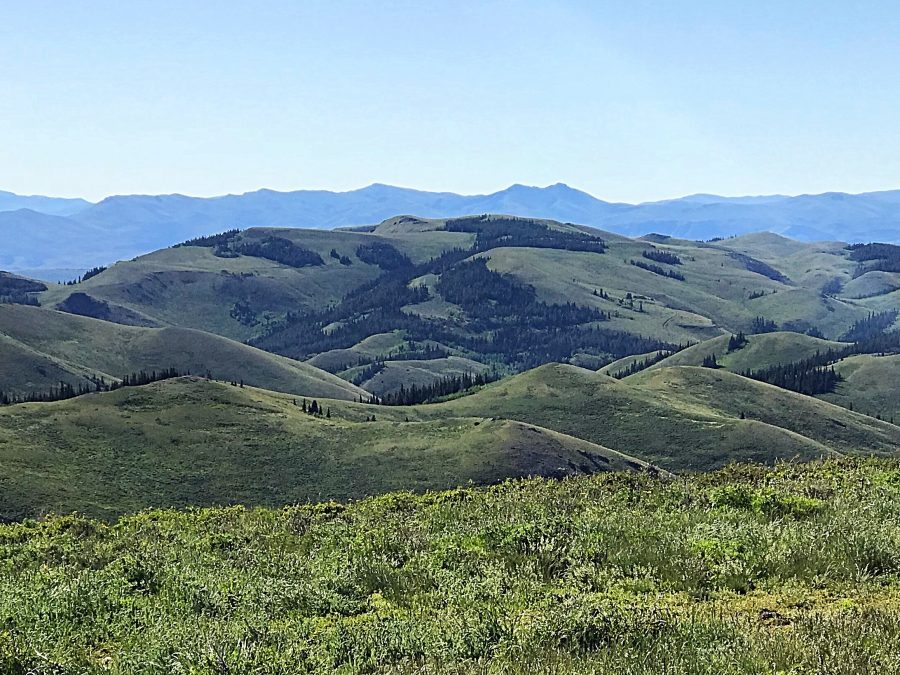 From the Phantom Falls trailhead, cross to the north side of FSR-533 and follow an unofficial, rough, steep ATV track briefly as it climbs due north up onto the southeast ridge. The ATV track quickly ends and the open scrub terrain takes over. The ridge is ill-defined here and is more of a face climb. Scramble through the sagebrush north to about 6,100 feet to pick up the better-defined ridge. The ridge heads left-ish here (in a northwest direction). Grind your way up this magnificent ridge as it tracks the right/northeast side of Cold Spring Canyon. The ridge has a few short sections of brush-bashing but those areas are short-lived.

The high point of the east summit is at its west end, at a rocky outcrop. There is a summit cairn here. The summit plateau is pretty flat here, so I walked all the way to the east end of the plateau just to be sure that the west end IS the high point, and it is (albeit barely). Visually, the east summit is clearly higher than the west summit, by a good margin—I would estimate by good 40 to 50 feet. The USGS map errors in the South Hills, particularly on the Trapper Peak and Mahogany Butte quadrangles, are extensive. The cartographers at the USGS were very sloppy in their mapping of this area. Their own maps have numerous inconsistencies, so I’m afraid that you must go with what is actually highest and ignore the contour lines and point estimates.