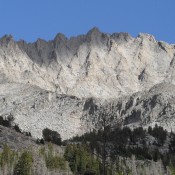 Climbing and access information for this peak is on Pages 252-253 of the book. The information in the book is a bit confusing. First, the two routes listed basically cover the same route (i.e., the South Ridge) but from two different starting points. The book references Rick Baugher’s South Face route but provides no further detail. Thus, below you will find revised route descriptions for the routes in the book, descriptions for the South Face and the Northwest Gully routes, and a link to the West Face Direct route first climbed by Pat McGrane, George Reinier, and Johnny Roache in 2009.

Brocky Peak is the 22nd-highest Idaho summit. It is one of the most difficult Idaho peaks to climb. The peak is a conglomeration of knife-edged ridges, steep walls, and sketchy gullies. There are simply no easy routes to the top from either an access standpoint or a climbing perspective. USGS Standhope Peak 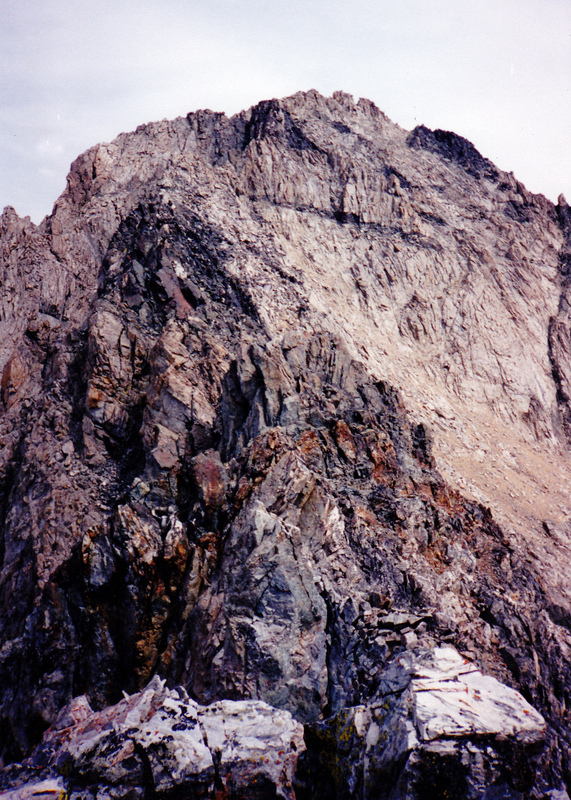 Starting in the foreground, the knife-edged South Ridge of Brocky Peak connects with the face behind it. The Class 4-5 route starts with an “au cheval” move. A slightly-easier approach to Brocky’s summit is to down climb from this point and then climb the face farther to the right. Rick Baugher Photo and Commentary

This route is listed in the book and also uses the South Ridge. However, unlike the Wildhorse/South Ridge Route, this route follows the entire South Ridge. Gain this ridge from Upper Box Canyon Lake. This route encounters Class 5 terrain is a very time-consuming way to reach the summit of Brocky Peak.

This route was mentioned in the book and a route line was shown on an accompanying photo, but no details were included. The route was first climbed by Rick Baugher in 1994. This route is the “easiest” known route to the summit.

Brett Sergenian climbed the route in 2018. Brett reports: “It took me nearly 11 hours to reach the summit. The elevation gain was only 4,800 feet but the terrain and deadfall made for a long day. The steep gully I used to gain the was Class 4 but relatively short. The gully was around 300 feet below the summit and put me back on the South Ridge. It was narrow and steep but appeared to be the easiest route up the South Face.”

Brett’s GPS track is set out below.

Judi Steciak and Carl Hamke climbed the route in 2009. They approached by making the long backpack trip in over Johnstone Pass. Their photo essay is set out below. 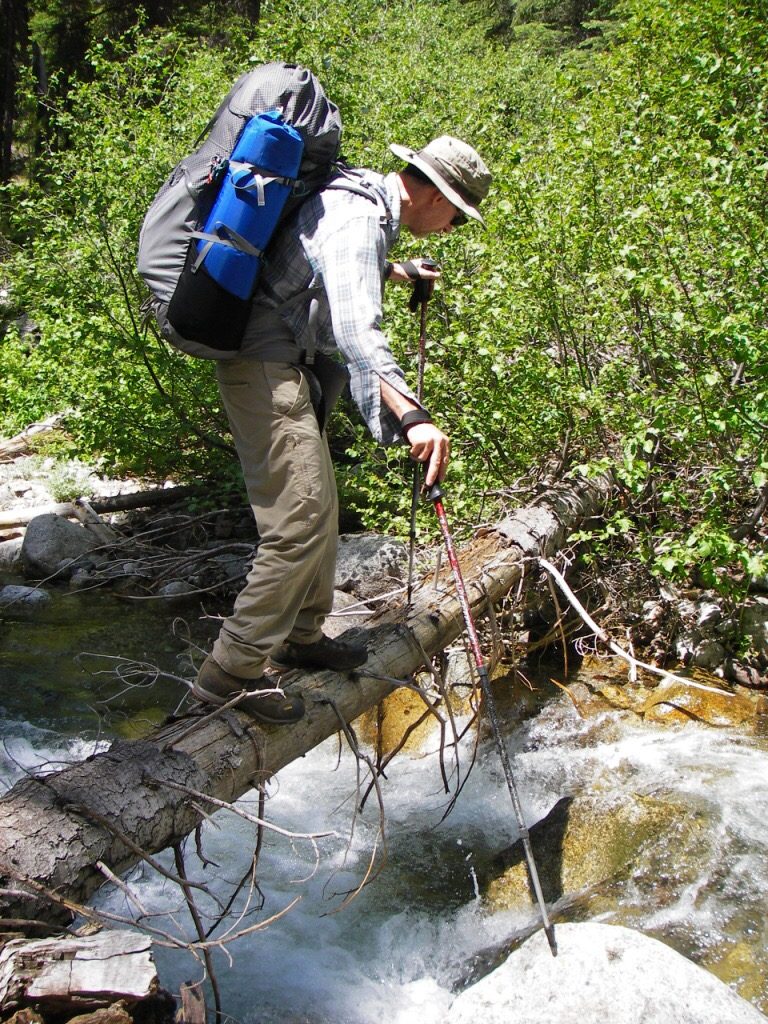 One of our many log-assisted creek crossings. Judi Steciak Photo 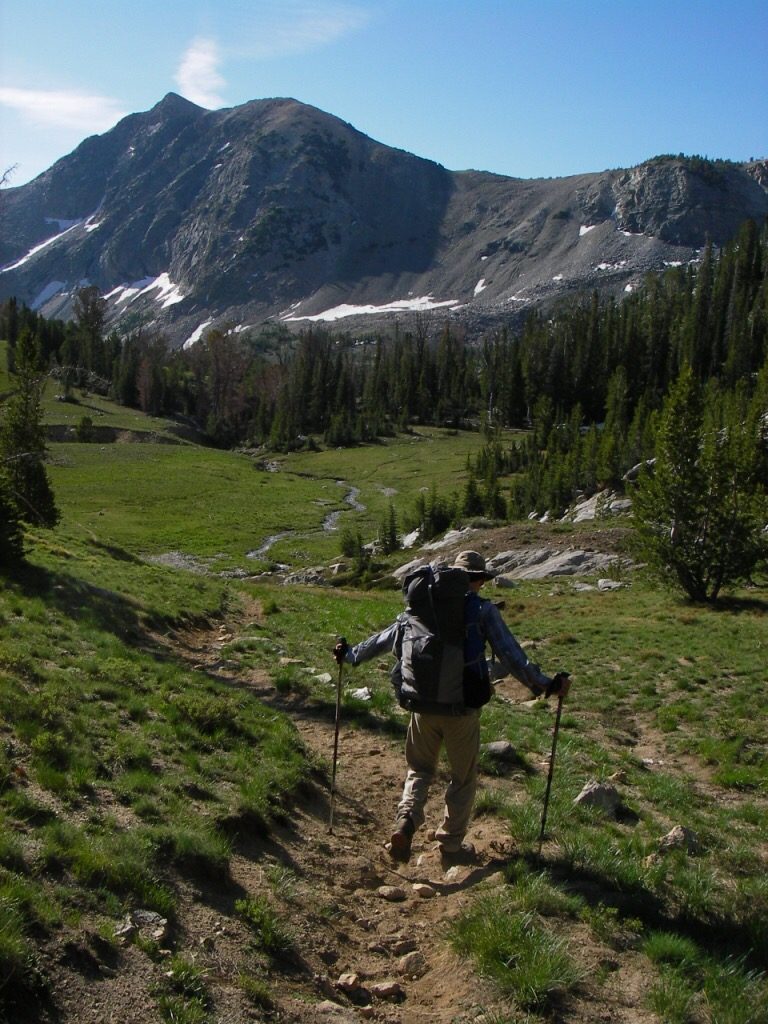 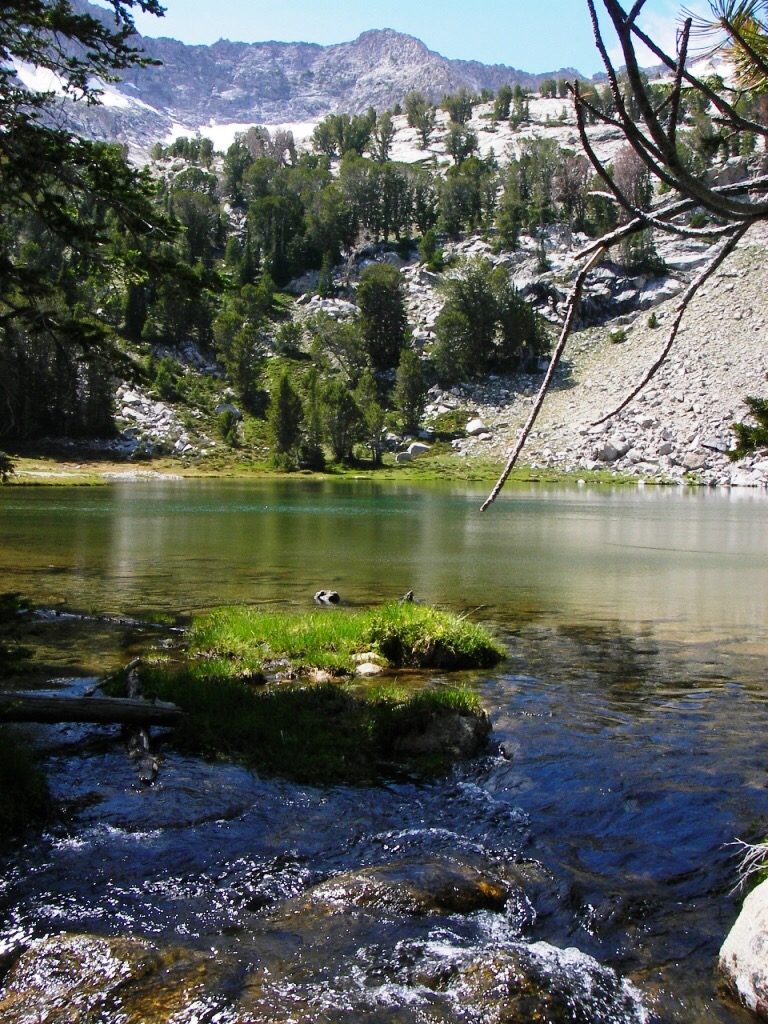 View from the outlet of Lake 9639. Judi Steciak Photo 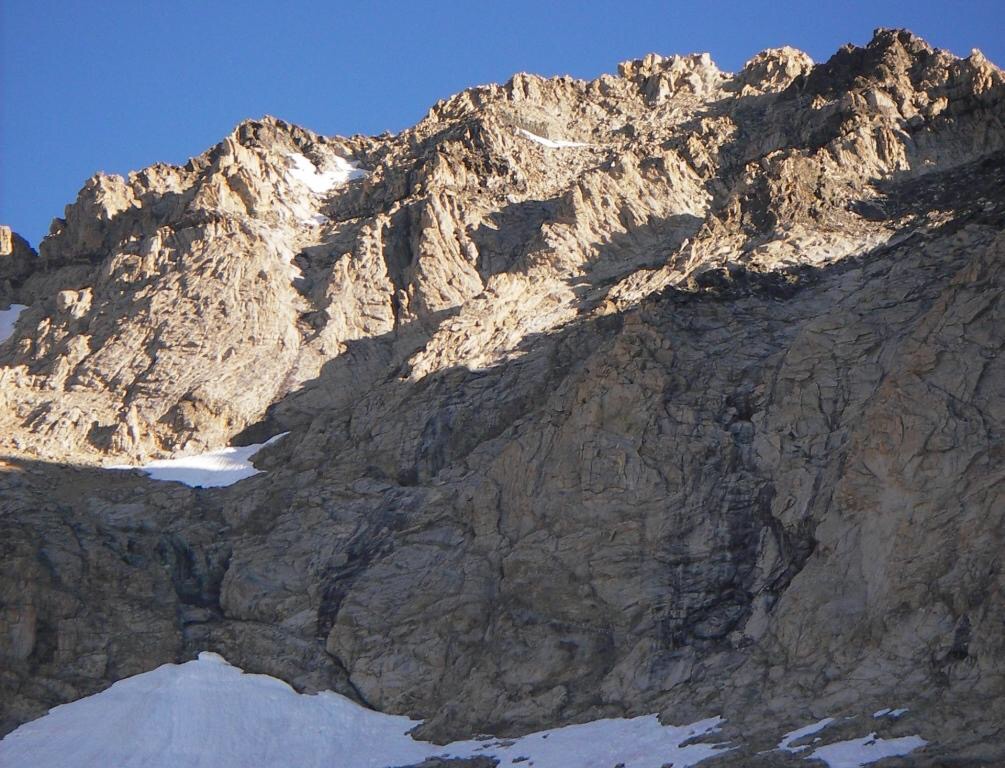 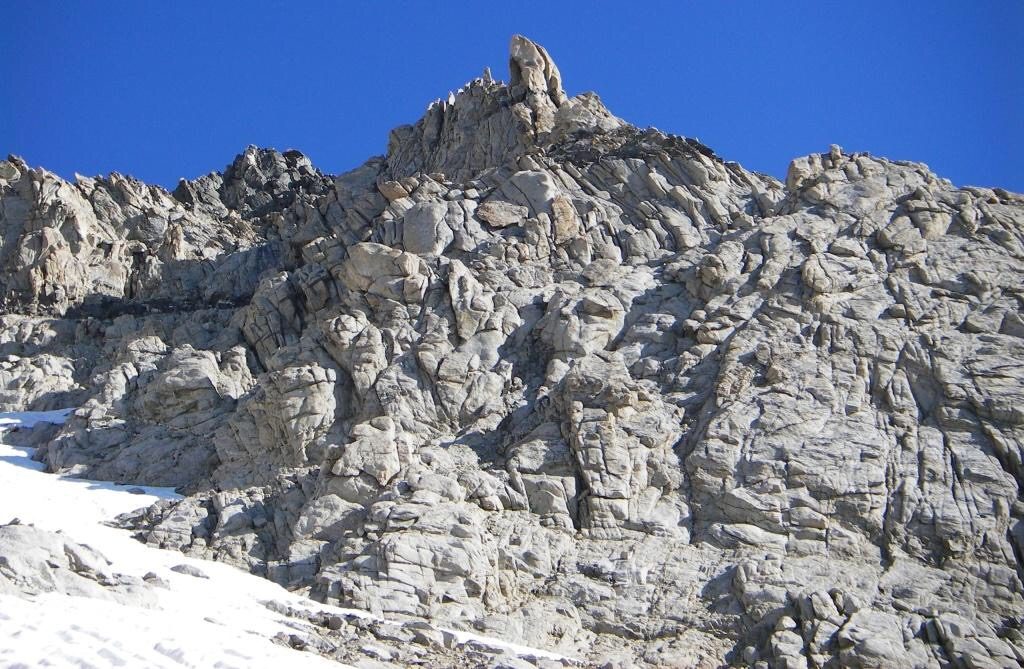 From the tongue of snow with the little rock mostly in shadow, we climbed up right in a gully then across a ledge/ramp to the little notch on the right skyline. Judi Steciak Photo 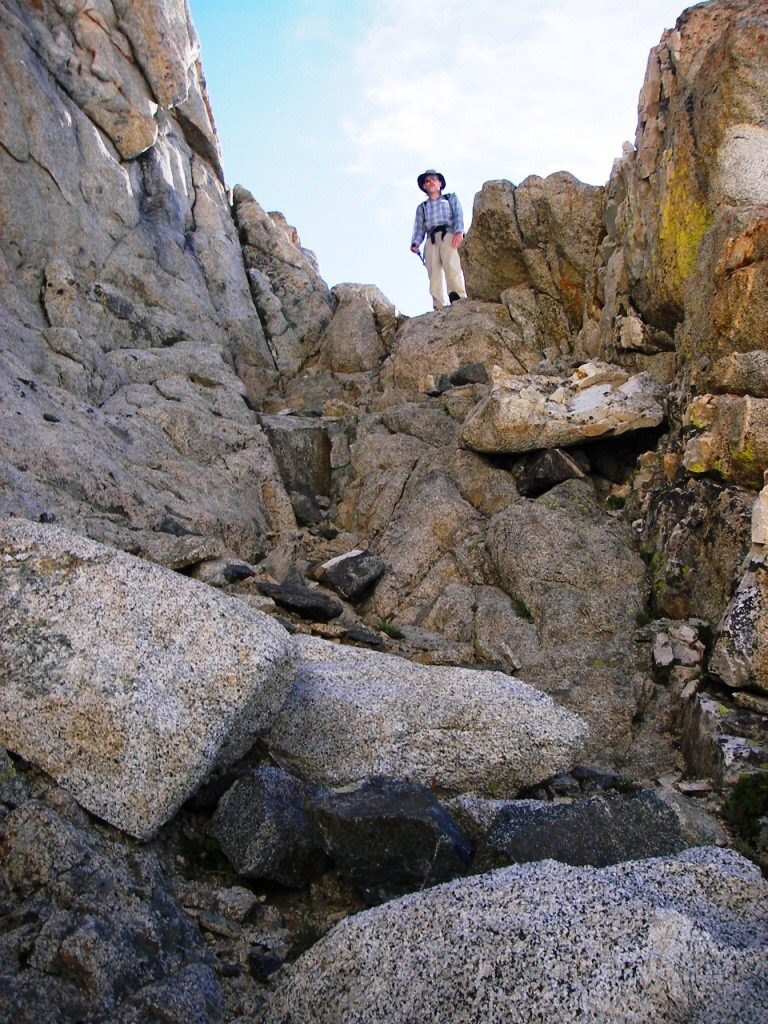 The Class 3 ledge/ramp. Carl is pointing to its terminus. We roped up here to climb about 15 feet up left to the black dike. Judi Steciak Photo 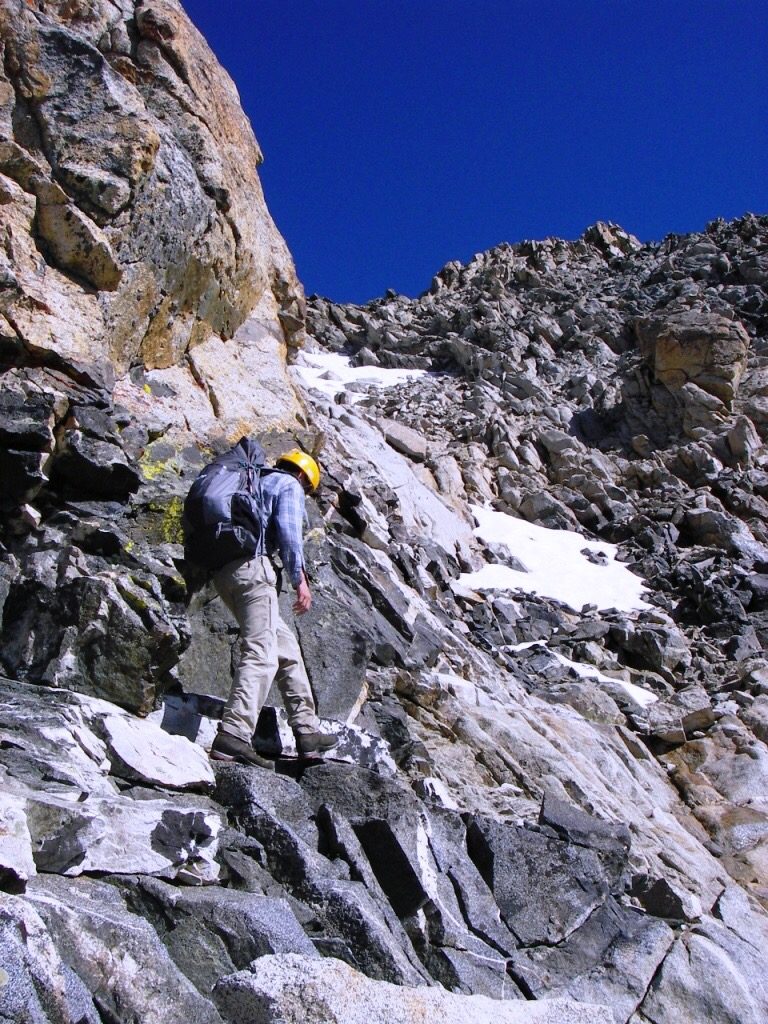 Carl has his helmet on now. We are traversing on the black dike to the first bowl. A bit of exposed Class 3 terrain here. Judi Steciak Photo 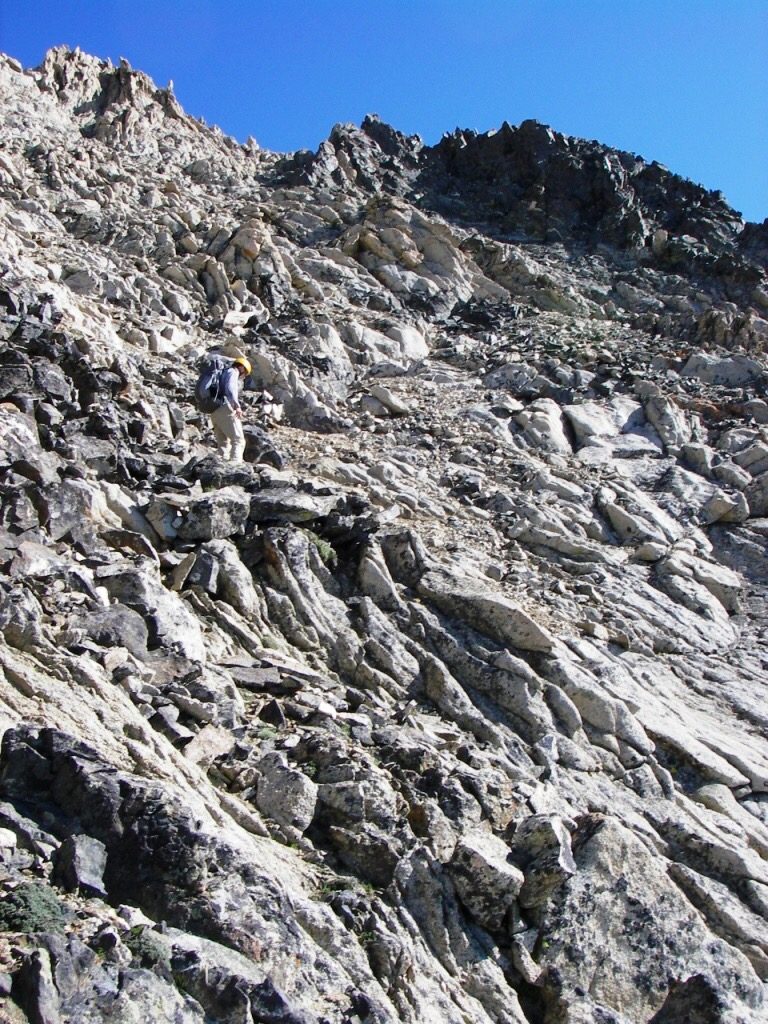 Our rising traverse across the second bowl brought us to the notch just left of the black rock on the skyline. Mostly Class 2 and a little bit of Class 3 getting to the notch. Judi Steciak Photo 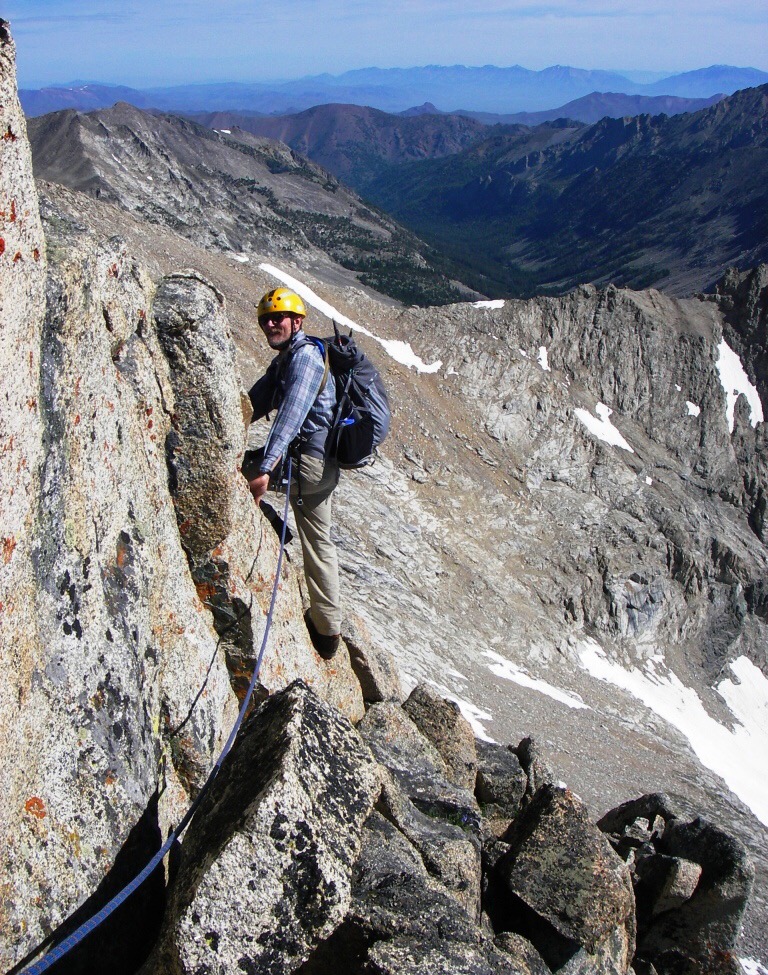 We roped up to climb close to the crest of the ridge. Carl is about to do a short Class 4 traverse around the north side of a small tower. This brought us to the final notch before the summit. Judi Steciak Photo 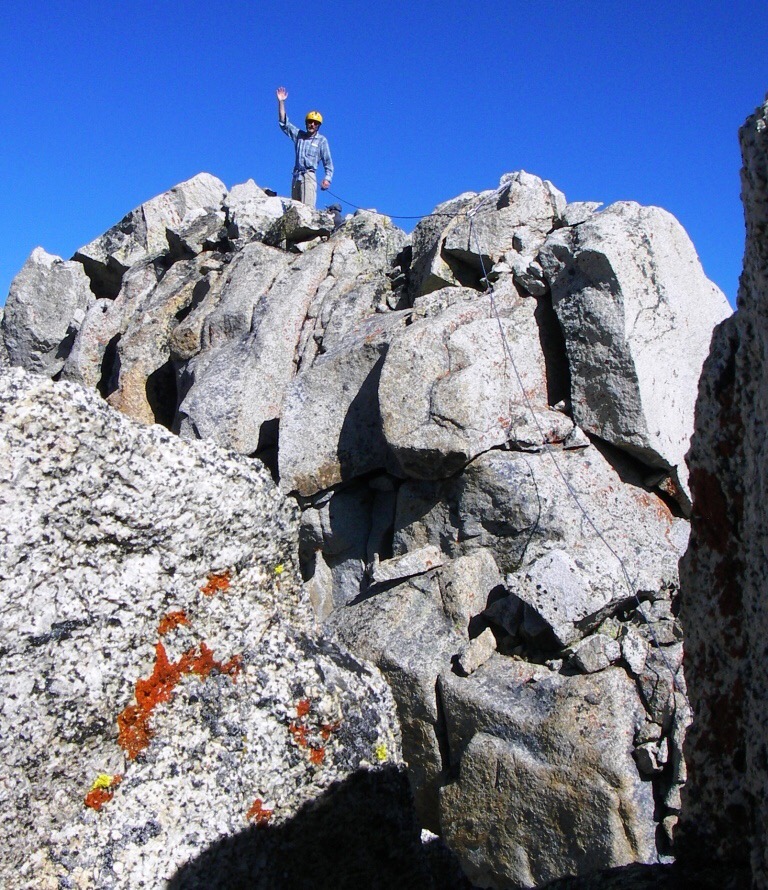 Carl kindly put in a piece to protect the Class 4 move up to the summit of Brocky Peak. Judi Steciak Photo 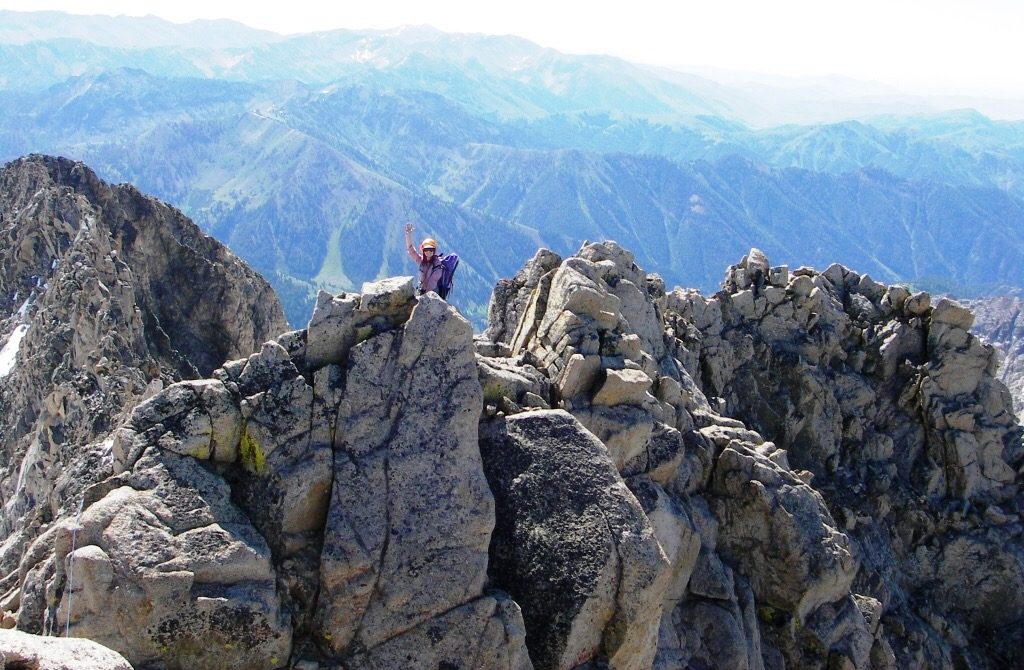 On the descent, I reversed the traverse. I could have gone directly up over the little tower in front of me (Class 4 at a minimum). Behind my back is the ridge we crossed – not difficult, just big drop-offs on either side. We stayed close to the crest, sometimes moving a bit to the North Side. Judi Steciak Photo 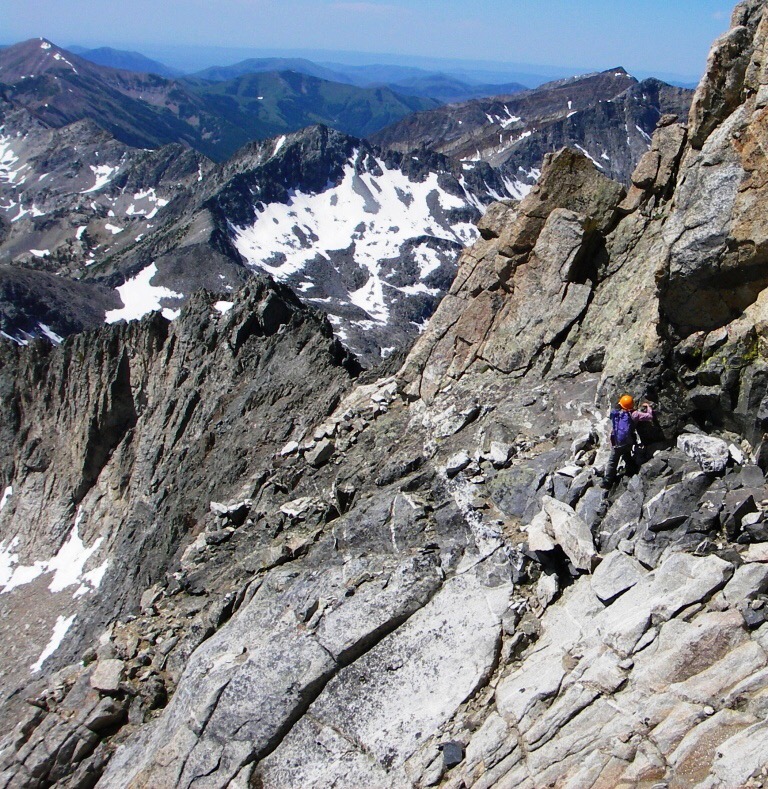 Returning on the black dike traverse. Just around the corner, we got out the rope again to protect our climb back down to the ramp/ledge. Judi Steciak Photo 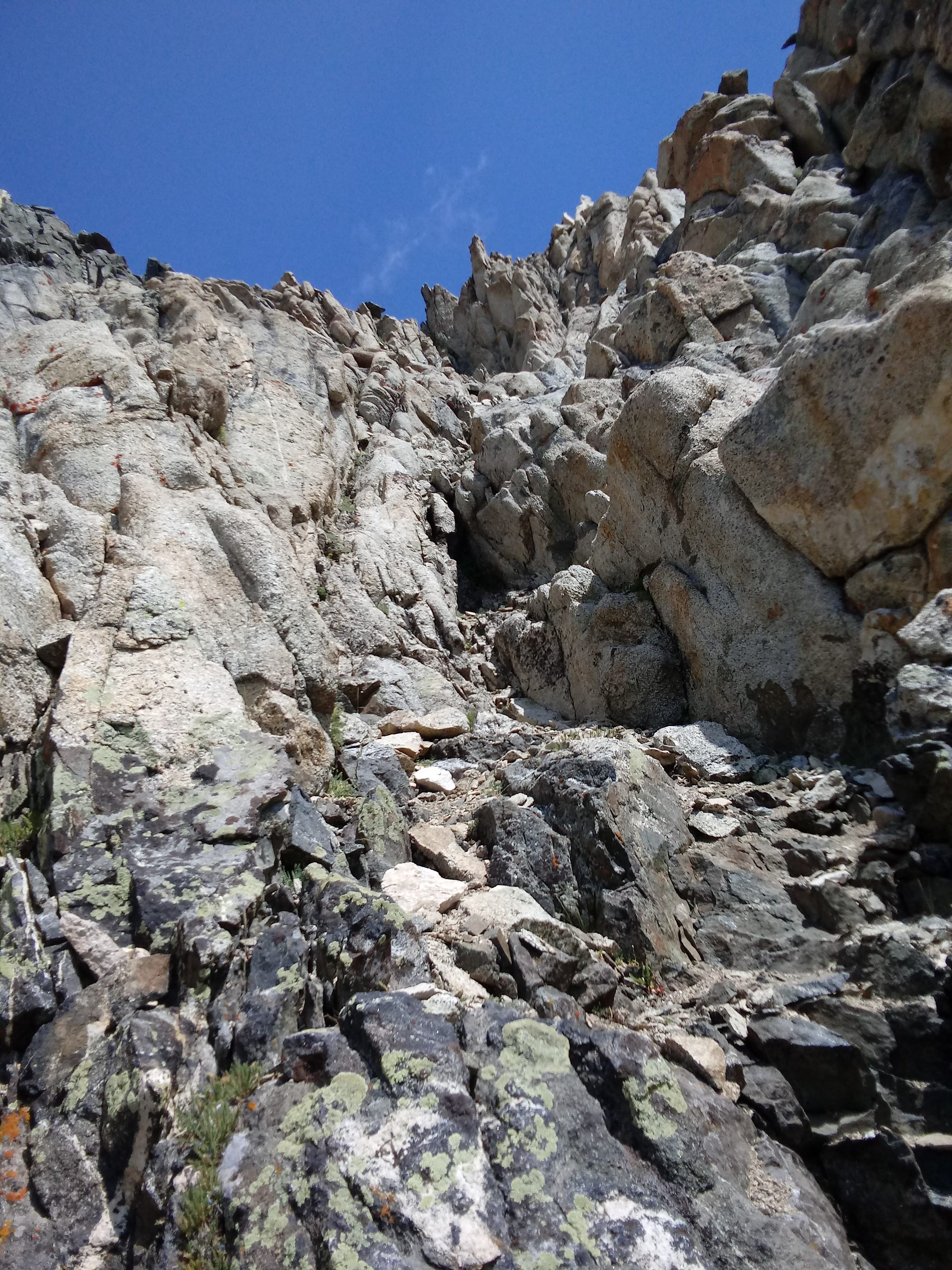 The Class 4-5 gully on the upper South Face is the crux. Brett Sergenian Photo 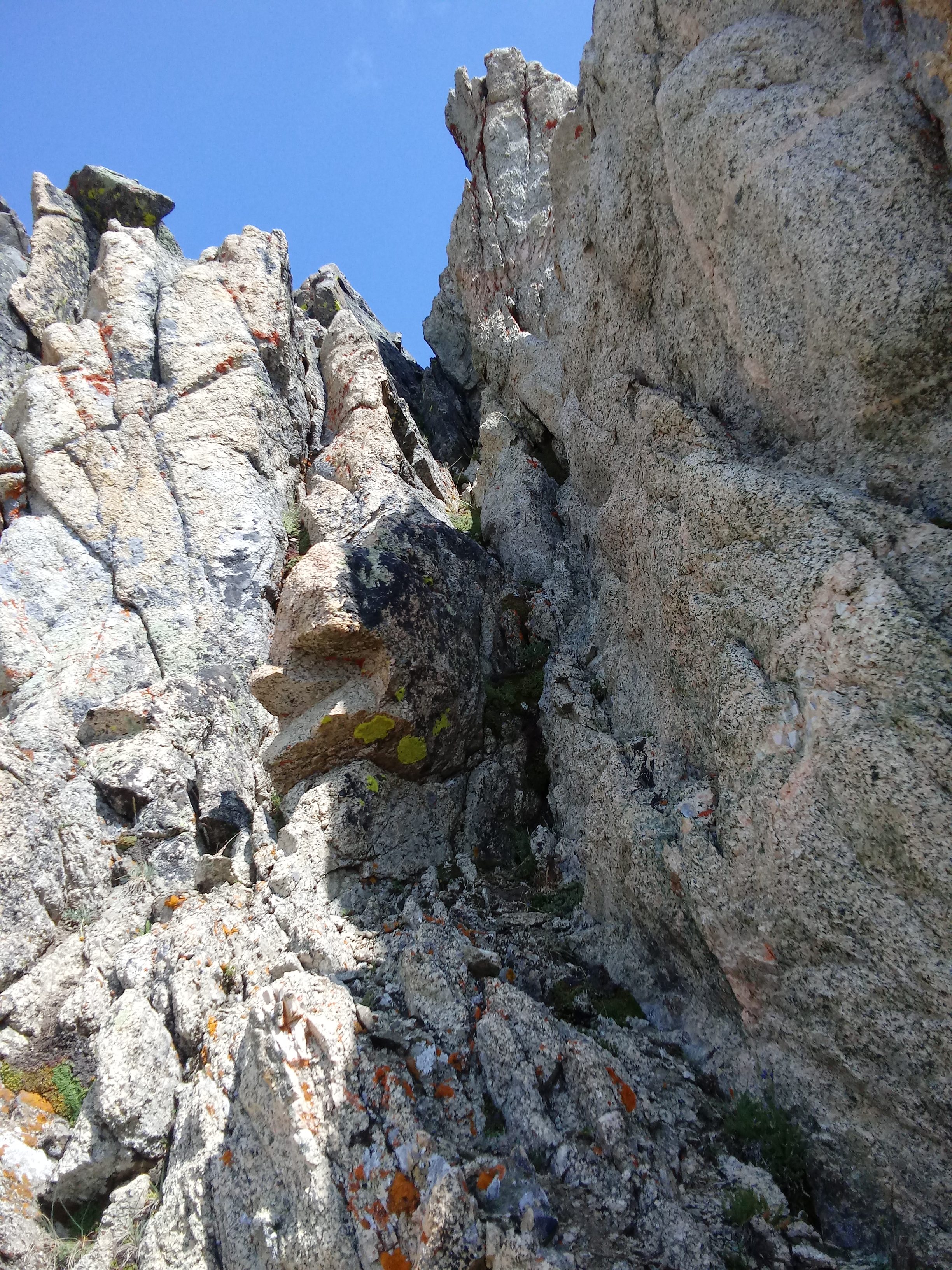 A closer look at the gully. Brett Sergenian Photo 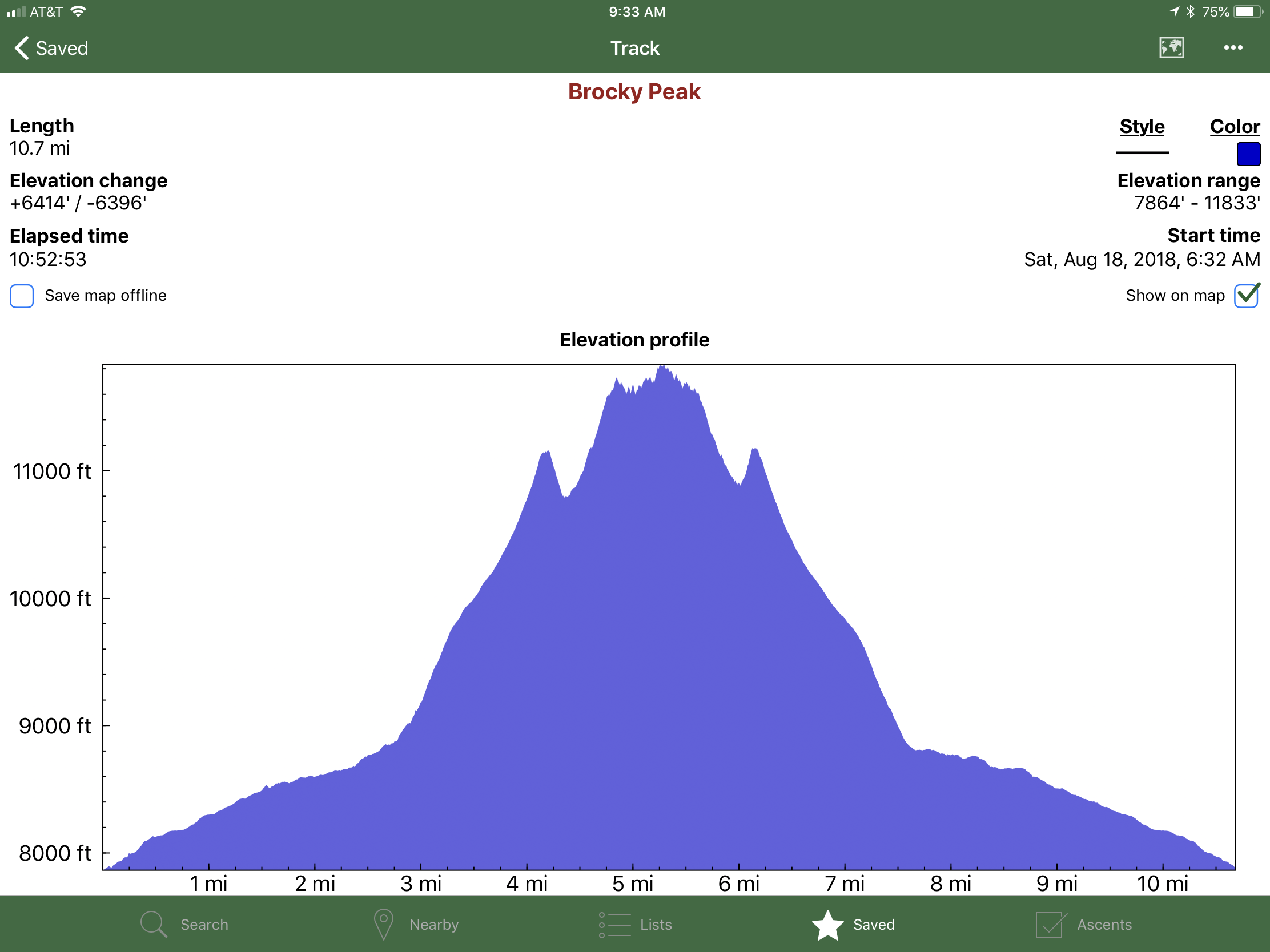 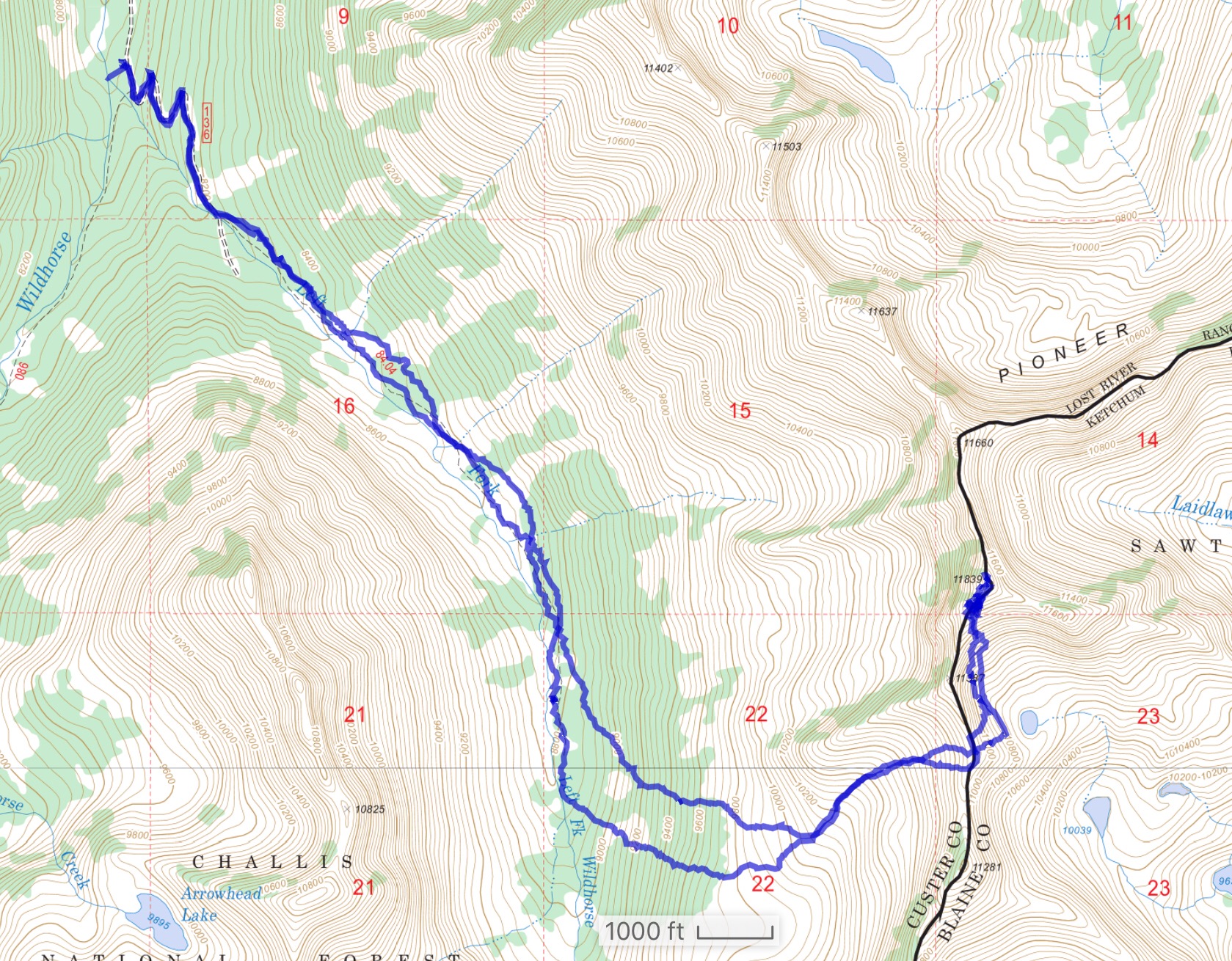 Brett’s GPS track. His device recorded 10.7 miles round trip with 6,400 feet of elevation gain. Brett reports the gain was closer to 4,800 feet.

This route climbs up the Northwest Side of the peak’s West Face using the South Gully system. This route was descended by Wes Collins in 2007 after he had climbed the peak via the South Face. Wes spotted webbing in the gully so there was likely an ascent prior to his descent. The first known ascent was by John Platt and Brian Mahon in 2011. The route is rated Class 4. However, several places are better rappelled than down-climbed.

Use the link below to read John Platt’s trip report. 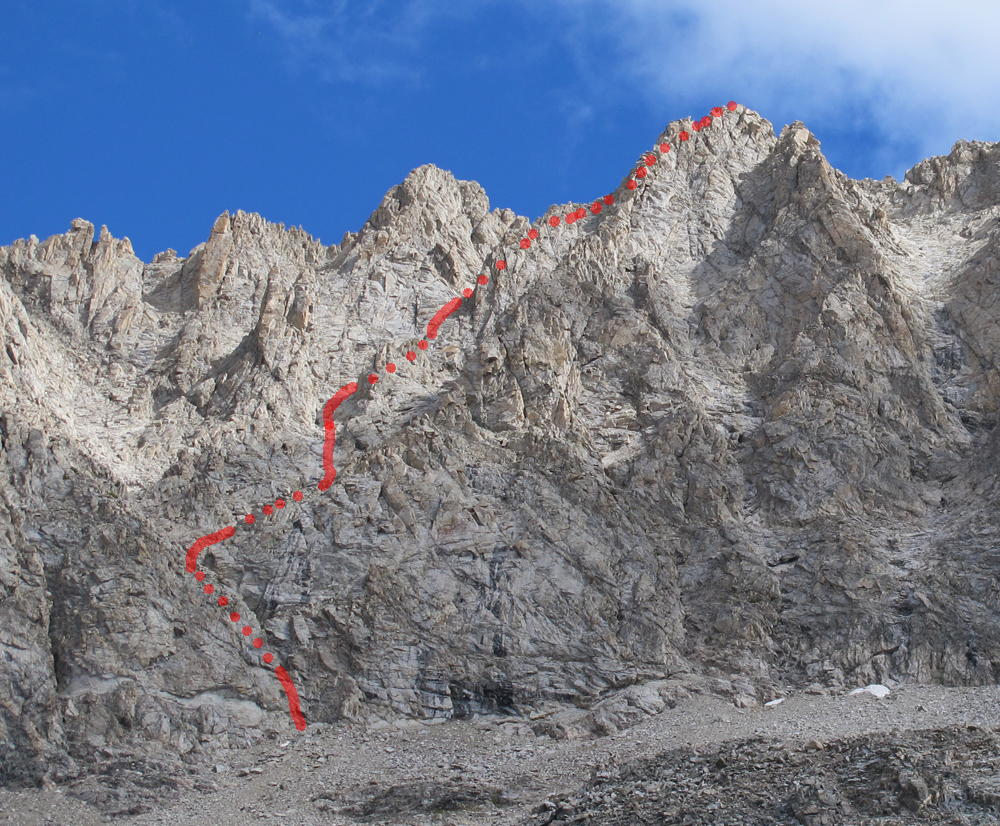 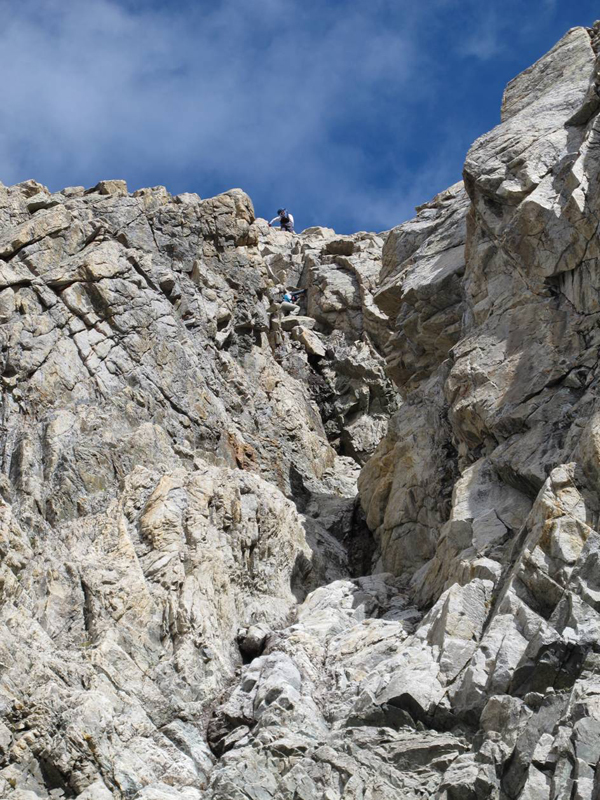 The start of the route climbs up a steep west-facing gully. Bob Boyles Photo 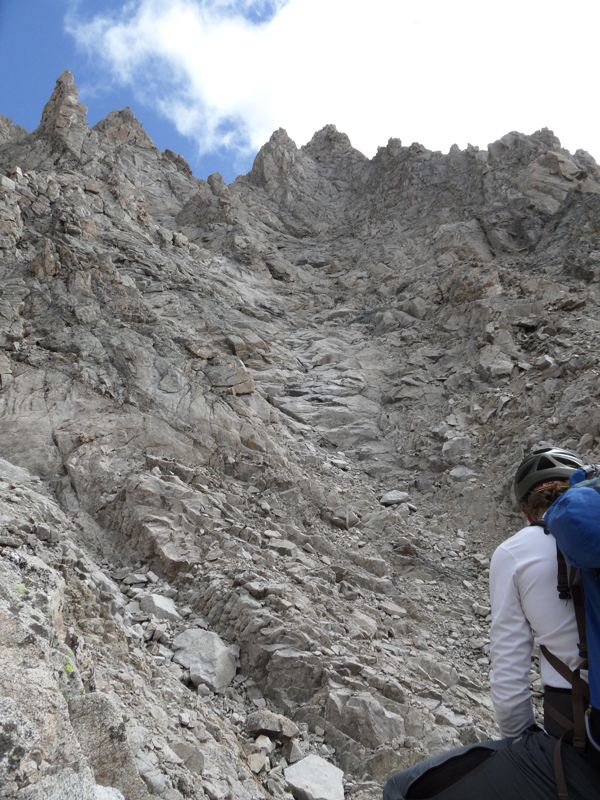 At the top of the first gully, the route turns right. John Platt Photo 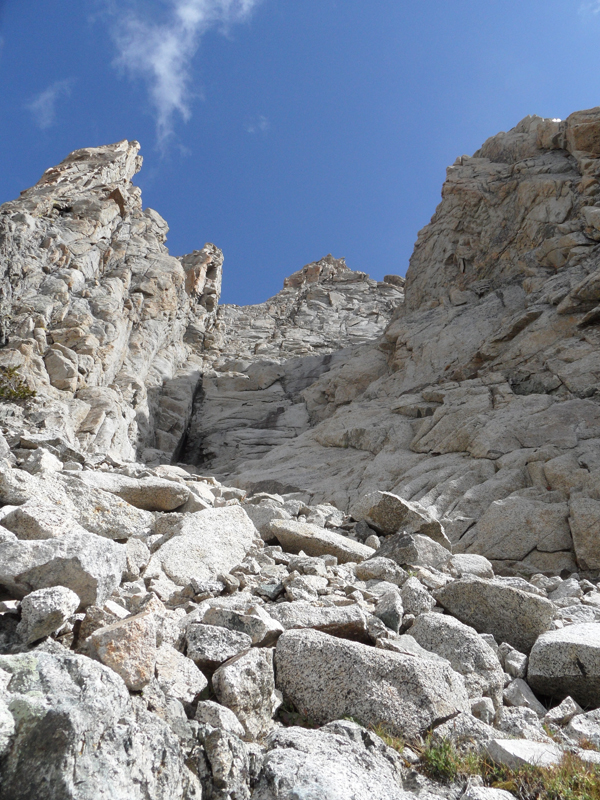 Climb up the second gully to another right turn. 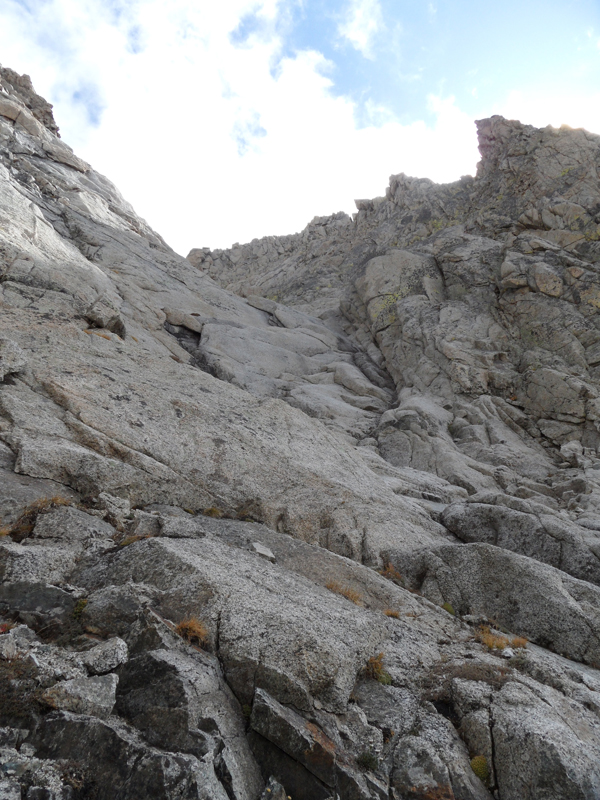 As you climb higher, you will reach the third section which takes you to the summit ridge. John Platt Photo

In its upper reaches, this route is located to the right of the Northwest Gully Route. The West Face route is discussed in detail on Page 41 of Pat McGrane’s Wildhorse Classics climbing guide. Please follow the link to read about this route in detail. 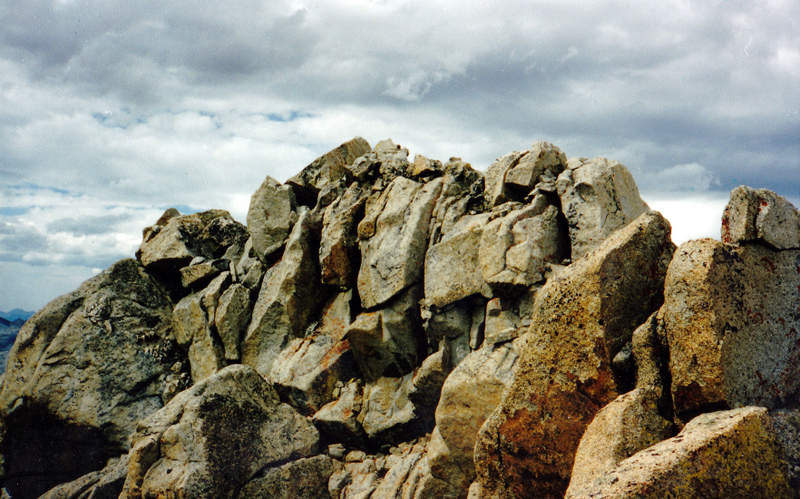 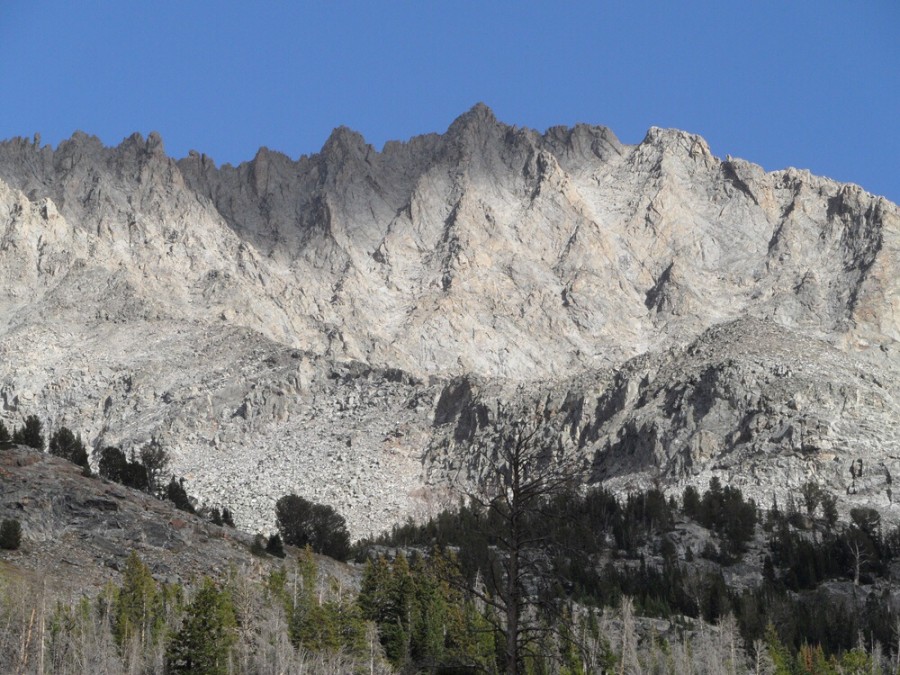 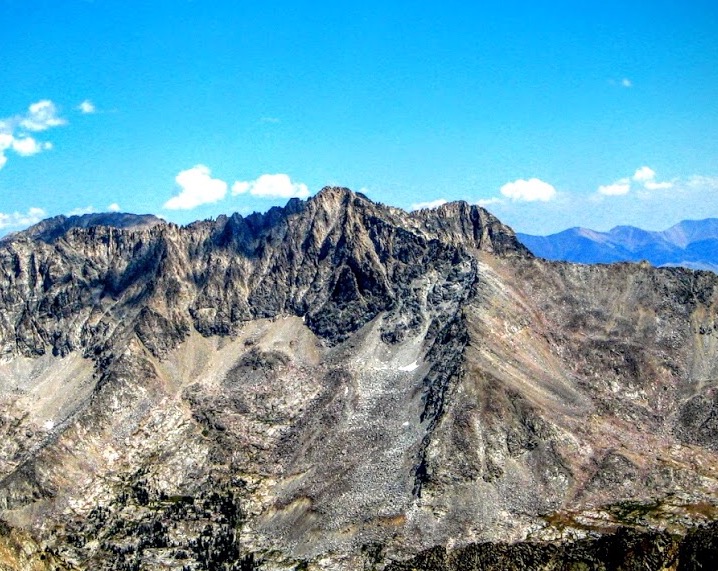