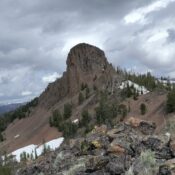 This peak is not in the book. Brett Sergenian made the first reported ascent in 2022. I attempted the peak a month later. Based on my attempt I have updated the entry. I also made a reconnaissance along the eastern side of the peak and climbed up to the notch between the main summit and the second summit. My high point was was roughly 50 feet short of the top. I did not find a nontechnical route to the top. Updated August 2022

Little Buffalo Hump is an nearly vertical volcanic remnant located northwest of Bayhorse Lake in the Salmon River Mountains. It is undoubtedly one of Idaho’s most striking summits and is virtually unknown in climbing circles. It’s southeast to northwest trending summit ridge has three has rugged summits. The southeastern summit is the highpoint. USGS Bayhorse Lake 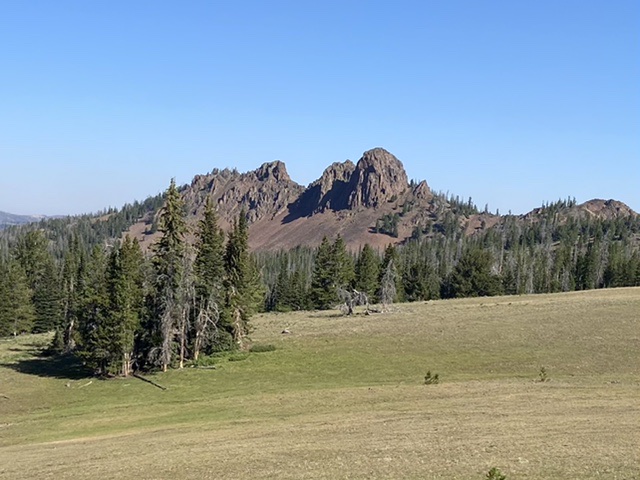 Following the wire fence from the ATV trail, FST-149 the route reaches a picturesque meadow with Little Buffalo Hump as the backdrop. 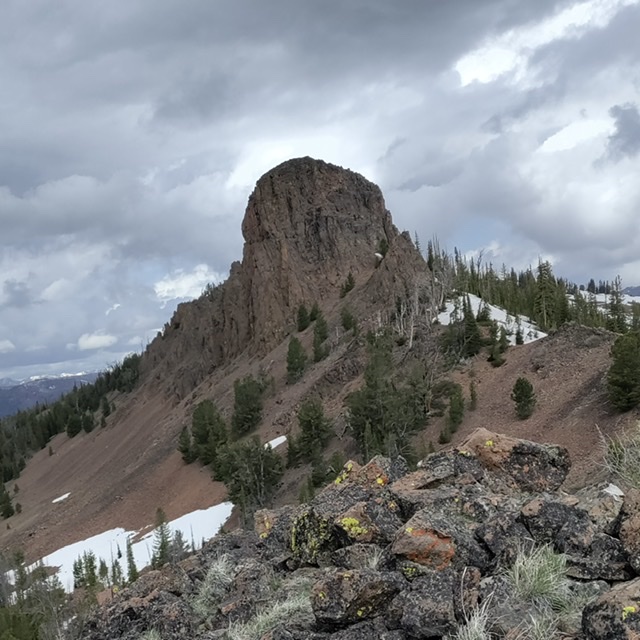 Primary Access is from ID-75. Turn onto the signed Bayhorse Lake Road which is 55.5 miles from the junction of ID-21 and ID-75 in Stanley or 17.3 miles from the junction of ID-75 and US-93. Follow the road to Bayhorse Lake [(G)(1) Page 141]. The maps of this area, including the Forest Service 2016 tops are completely inaccurate when it comes to the location of trails. The Bayhorse Lake CG is now located south of the lake. Just before reaching the CG entrance the start of FST-149 now leaves the road’s west side. This trail is open to ATVs. Follow the trail west. It gradually climbs to a saddle on Peak 9340’s north ridge. Continue west until you reach a fence line. The fence is not shown on the map. The trails on the map leading north toward Little Buffalo Hump do not exist. Follow the fence line north through forested terrain and a large meadow until you reach FST-201. This junction is not signed but is marked by a very old log fence. This fence is built with large logs. From this junction the route follows the ridgeline northwest to the base of the peak. See the maps below. 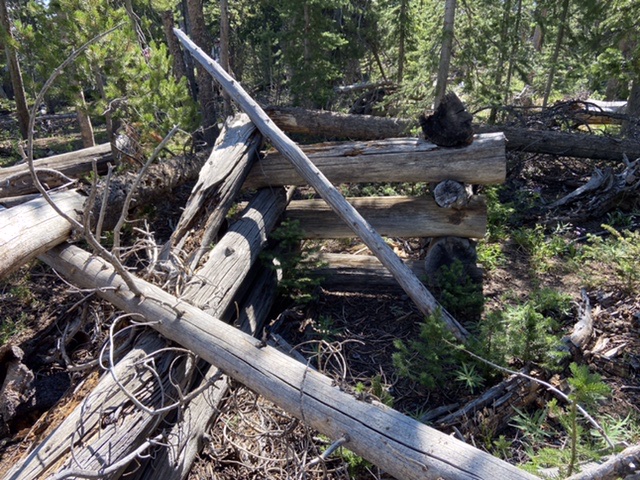 This is the log fence found at the point where the wire fence meets FST-201.

While Brett rated this route Class 3, it is undoubtedly a technical climb. The vertical distance to the summit is approximately 150 feet. Brett described this route as follows: “The gully on the south face that is class 3+ that has good holds but is more exposed than the southeast face. I descended the southeast face which ended up being class 3.” Brett is a fearless climber but most climbers, myself included, will want a rope and protection to climb the face. I also take issue with his use of the word “gully” as the face does not have a distinctive gully. 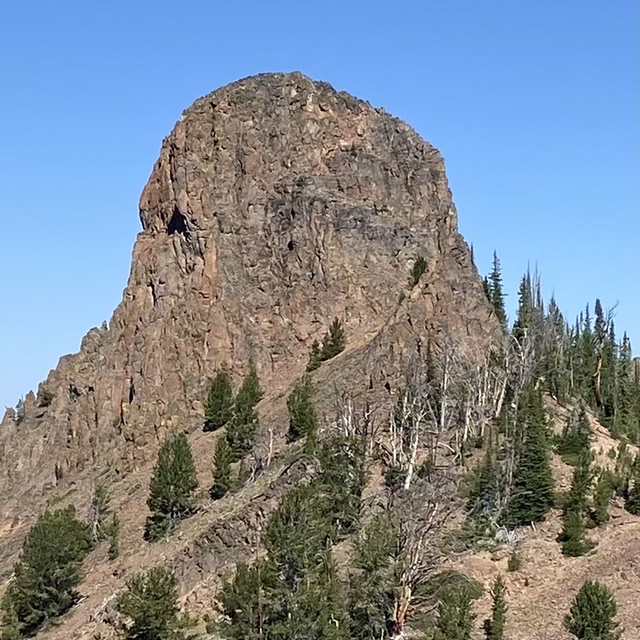 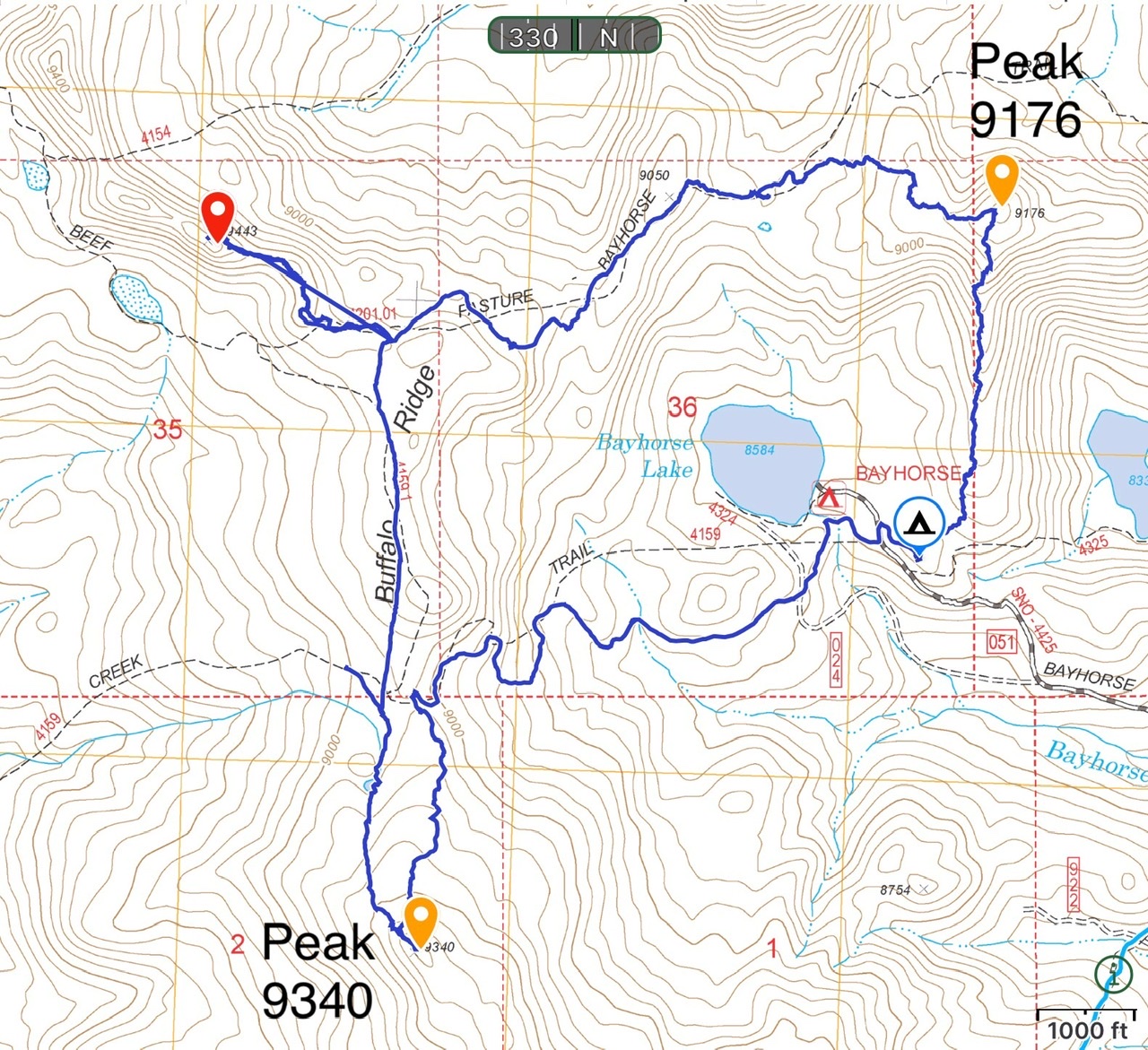 This map shows the Buffalo look that provides access to Peak 9340, Little Buffalo Hump and Peak 9176. The loop utilizes an ATV trail, fence lines, FST-201 and crosscountry travel. Total distance with visits to all three peaks is 7.5 miles with roughly 1,400 feet of elevation gain.