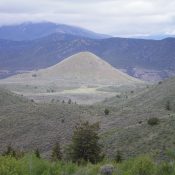 Cedar Mountain is a big mountain that reaches from Garden Creek Gap all the way south to the Hawkins Reservoir. It dominates the east side of Hawkins, ID. There is a lot of private property in this area so be careful. Most of the mountain is on BLM land. There is no Forest Service land here. Cedar Mountain is most easily climbed from Garden Creek Gap but private property blocks this route. The only publicly-accessible route is the south ridge, which begins at the Hawkins Campground/Picnic Area at the base of the south ridge. USGS Hawkins 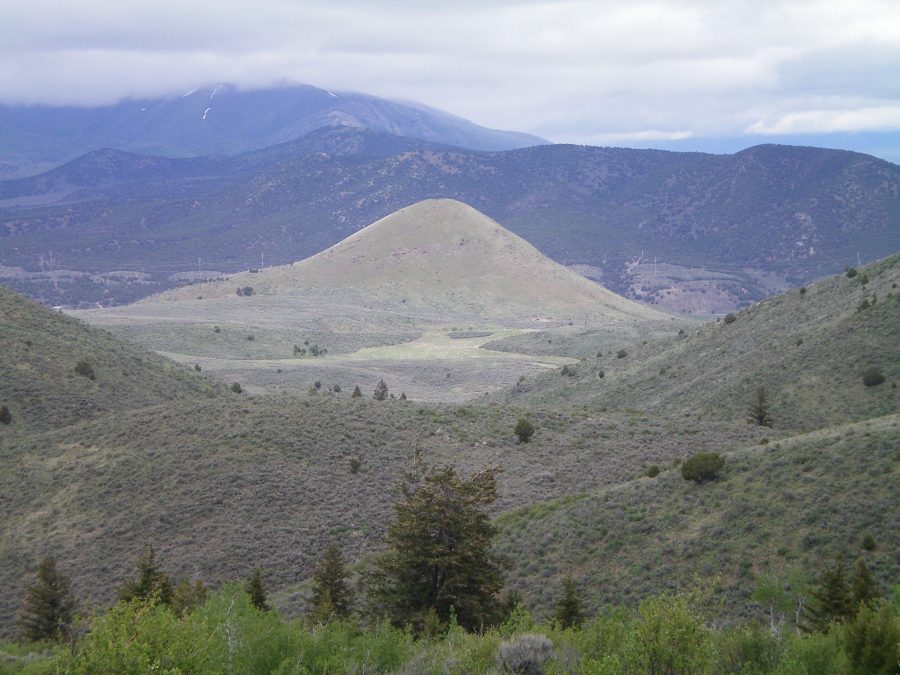 Cedar Mountain (forested in mid-ground) as viewed from the southwest on a high ridge. Rattlesnake Peak is in the foreground and Old Tom Mountain is partially cloud-covered and is in the background. Livingston Douglas Photo

From the Arimo/Robin Exit on I-15 (Exit 40), drive west on Arimo Road past the hamlet of Robin, ID. At 8.4 miles (about a mile past Garden Creek Gap), go left onto Harrington Road. At 9.7 miles, reach a “T” junction with Hawkins Road. Go left here and drive 3.3 miles to the small Hawkins Campground/Picnic area at the south end of Hawkins Reservoir on the left/east side of the road. Park here (5,140 feet).

At the south end of the Hawkins Campground, there is a signed BLM road (Road #113). This road does NOT appear on the USGS topo map but it is very useful in climbing Cedar Mountain. This mountain will remind you of Old Tom Mountain to the north: a LONG south ridge with lots of ups-and-downs along the way. The good news is that, unlike Old Tom Mountain, Cedar Mountain has a BLM road (and subsequent cattle trail) to help in this long ridge scramble.

Follow BLM Road #113 steeply northward up the south ridge. Be aware that there are multiple ridges at the south end of Cedar Mountain. They all lead up to the primary south ridge. The terrain is initially open forest and then becomes much more open higher up. BLM Road #113 weakens then strengthens before ending while still on the south side of the south ridge. A cattle trial takes over. Follow the cattle trail near the ridge crest.

The ridge weaves around a bit and has lots of ups and downs. You must cross a cattle fence before reaching the first of many ridge points. The terrain on the flatter, upper ridge is a mix of junipers and sagebrush. A final push leads you up to the long summit area. The south summit is an open, grassy hump. The north summit (the true summit) lies about 0.2 miles farther north. Altimeter readings confirm the map’s assessment and the north summit is 25 to 30 feet higher than the south summit.