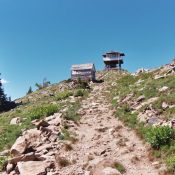 This peak is not in the book. I added historical information provided by the Nez Perce Clearwater NF at the bottom of this page. Updated July 2021 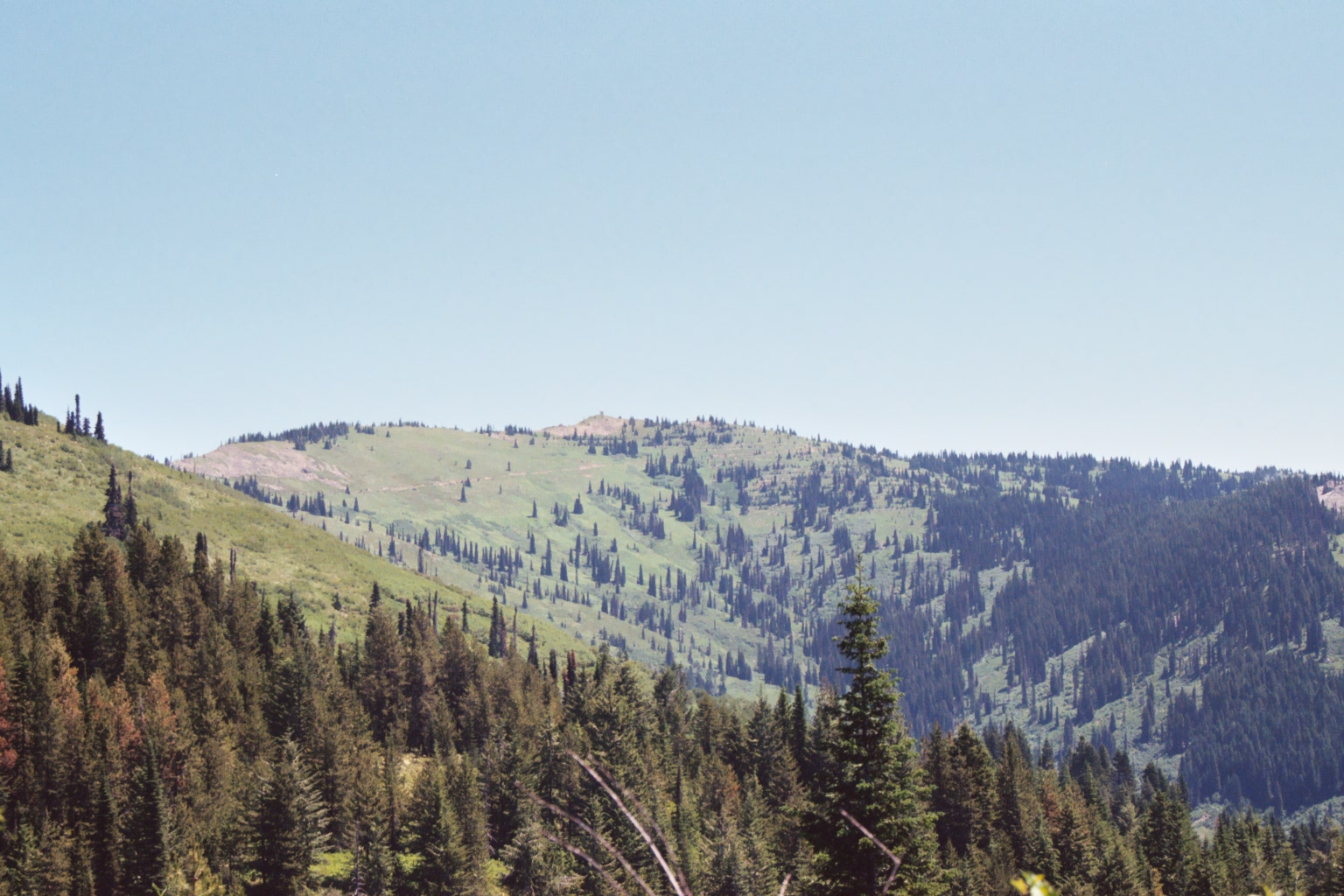 This is the high point of Coolwater Mountain, which is the westernmost high point of the Lochsa/Selway Divide (Ju;y 2007). However, it’s not very high at 6,929 feet. But it has a respectable 1,129 feet of prominence, rising over a mile from the valley bottoms it divides. Mike Hays Photo

The mountain is a significant trail hike (more than one vertical mile) from the canyon bottoms on both its north and south sides. Alternatively, drive a road that goes almost to the top along Coolwater Ridge. But, it is not easy…the road is one of the most rugged anywhere, is virtually undrivable to many vehicles, and is not for the faint of heart.

Formed of crumbly granite and quartz-derived material, the ridge crest runs east-west for about 7 miles. The bulk of the ridge sits above 6,000 feet. The north side is forested with subalpine fir. However, much of the area is brush after huge fires in the early 1900s. The south side is a beautiful parkland of open subalpine fir scattered across lovely verdant slopes of subalpine grasses, sedges, and beargrass. Lower slopes are covered by the inland coastal refugia rainforest famous in the Clearwater Basin. Some less common subalpine coastal disjunct are also found on the upper slopes.

Spectacular view abound! To the west, you can see far beyond the Camas Prairie into the big canyon country of Oregon and Washington States. To the north, look into the northern Clearwater Basin and possibly a few points within the St. Joe. To the south, view the higher summits on the South Fork Clearwater/Salmon Divide. On a clear day, you can see peaks south of the Salmon, the Seven Devils, and possibly beyond the Devils. But the eastern view is the best, with the high-central Selway Crags in the foreground and the higher expanse of the Montana Bitterroots far beyond. 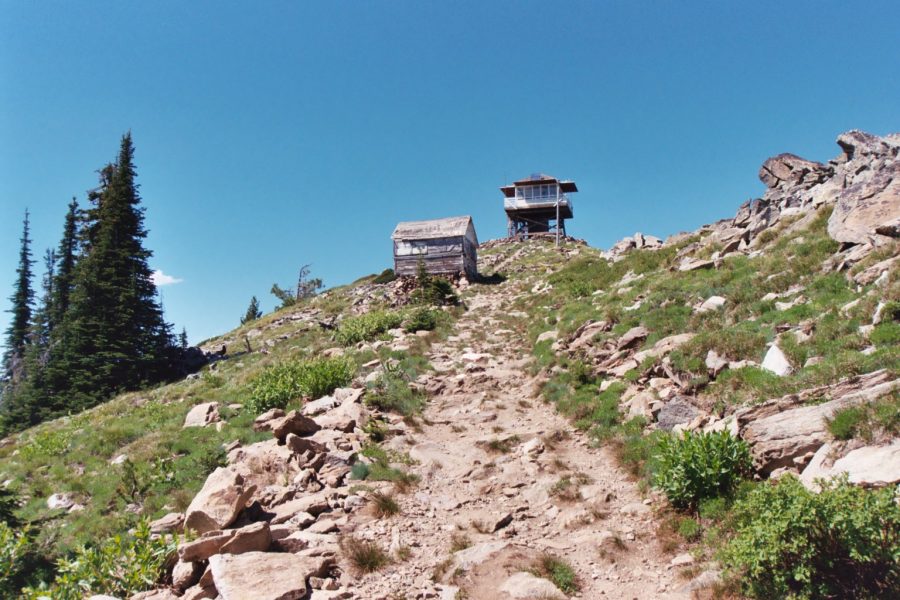 From the lowest elevation trailheads in the Lochsa and Selway Canyons, you will climb over a mile to reach the summit. Though not technical, these routes are long, strenuous climbs generally used by outfitters during hunting season. The Coolwater Road/FSR-371) allows you to drive almost to the top. At the start the road will look like a driveway to a private residence, but it is well signed. The lower mile of this road passes through private property so please stay on the road in this area.

Coolwater Road/FSR-317: Access Coolwater Road from Selway River Road, about 1 mile upstream from Lowell and US-12. Narrow and twisty, the road follows Coolwater Ridge. The road is in fair shape to around Andy’s Hump where it breaks out into the open slope parklands of Coolwater Mountain. Here, the road is very rocky with some steep pitches.

It is not possible or safe to drive this road without high clearance and preferably 4WD. Nor is it possible to drive all the way to the top, without actually driving on a trail, but “rough” driving can get you very close. Alternatively, park at the saddle on the east side of Andy’s Hump and either walk the road to the summit or walk the ridgeline. Either way requires about 1.5 miles of hiking. 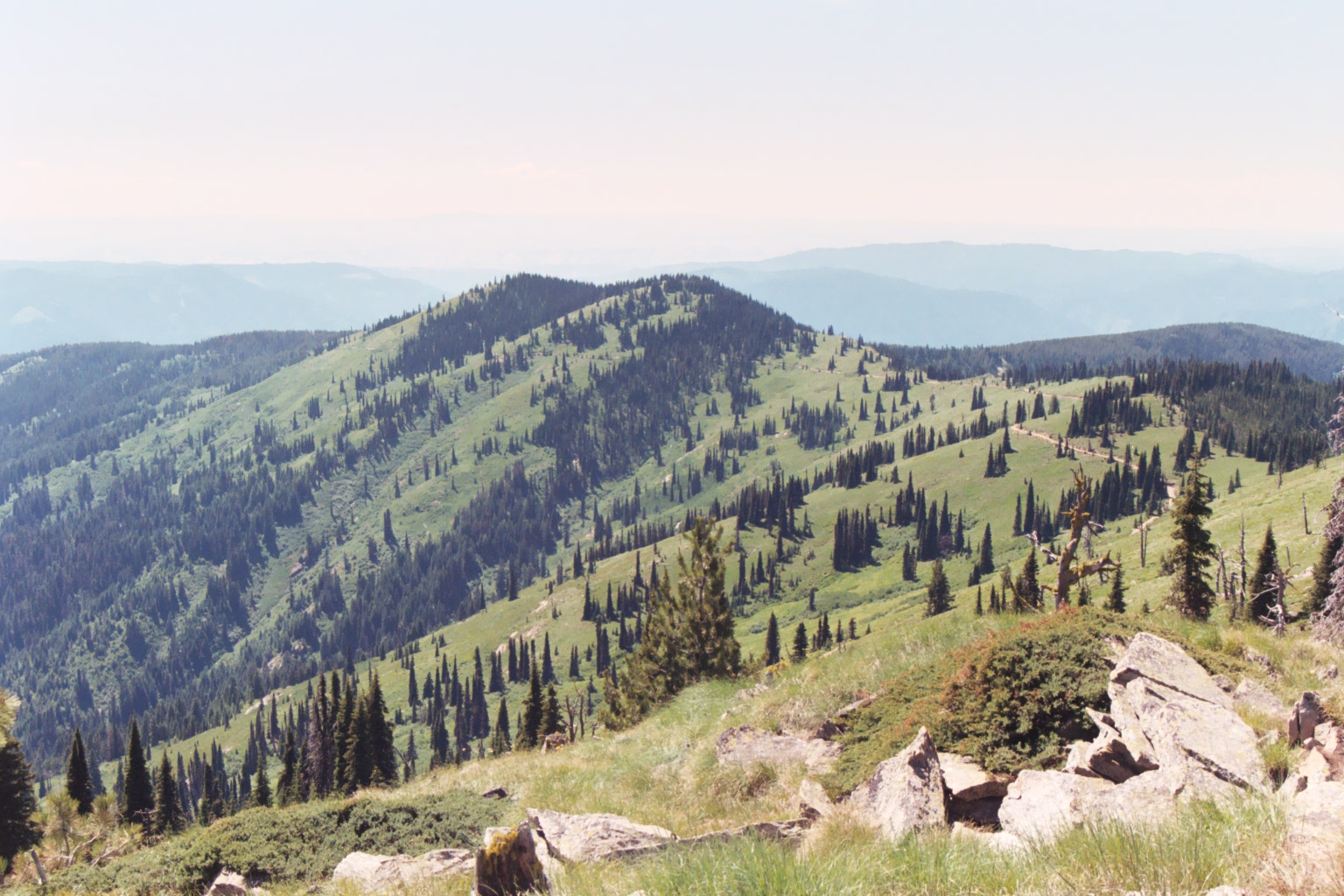 Located approximately 24 miles east of Kooskia on Coolwater Ridge, between the Lochsa and Selway River, Coolwater Lookout was one of the very first lookouts established in the Lochsa-Selway country. The first lookout was constructed in 1915. It was a 12’ x 12’ frame building anchored to rocks. In 1916 G.A. Burrows, a forestry student from Cornell University was stationed on Coolwater. He also ran daily patrols on the ridgetop about five miles each way from his station. Among his other duties were relaying heliograph messages from Fish Butte over his telephone to O’Hara Ranger Station on the Selway River. In 1930, the original frame house was moved down the hill 100’ for use as a storehouse and a 14’ x 14’ L-4 cabin was erected in its place. The L-4 cabin was used until 1953 when the old 1915 frame building was burned. The 1930 lookout house was moved down in its place and a new lookout was built on a 10’ tower—from Major Fenn’s Country by Neal Parsell.