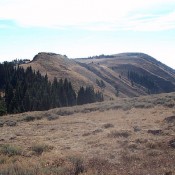 Cuddy Mountain is found on page 103.

Cuddy Mountain is the highest point in the Cuddy Mountains as well as Washington County. It has 2,770 feet of prominence which ranks it 25th in Idaho. This peak was named after John Cuddy an early settler who owned the first flour mill in the nearby Sulubria valley.

There are two ways to reach the summit. One involves a long, difficult drive and a short walk and one involves a steep trail hike which gains over 3,000 feet in 4.0 miles. Use the link for Dan Robbins’ trip report for hiking details.

The views from the summit are stunning. Due west in Oregon is Big Lookout Mountain and a bit closer the Snake River. Swinging north is a stunning view of the Wallowa Mountains, then the Hells Canyon and finally the Seven Devils. The eastern view is filled by a long stretch of the Salmon River Mountains’ Lick Creek Range from North and South Loon peaks in the north to Needles Peak in the south. Then you will spot Council Peak and the West Mountain crest and at it’s end Shafer Butte by Boise. The Hitt Mountains look impressive in their isolation to the south.

I used directions provided by Ken Jones for the drive to the saddle between Cuddy Mountain and Cuddy Point. Ken noted that this route requires a 4WD. I would add the further warning that the 4WD must have good off road tires with multiple ply sidewalls to  insure safe passage as there are long stretches of very rocky road to traverse. Leave Council where ID-95 makes a 90 degree turn. Turn left onto Moser Avenue and follow it for four blocks. Turn right onto North Railroad Street which turns into Hornet Creek Road after making a lefthand 90 degree turn. This is a good paved road. Follow it for 13.3 miles to it’s junction with FS-055. 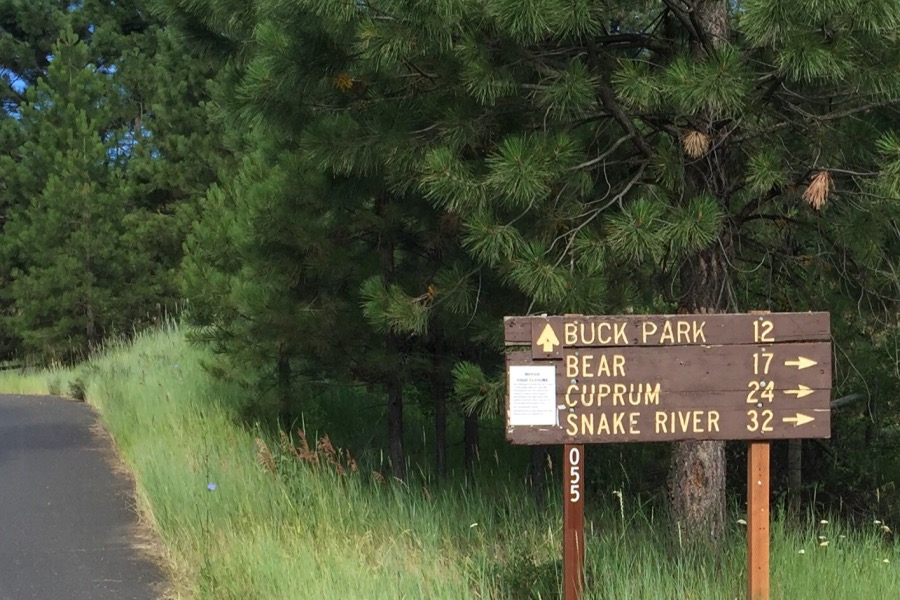 FS-055 is a fair road at first. Stay on the most obviously used road at a couple of unsigned junctions. The farther you drive, the rougher the road. Roughly eight miles from the start of FS-055 the road really detriorates into a rocky, bumpy 4WD route. At 9.1 miles you will find the signed junction for Hornet Reservoir. Keep right and be prepared for a really rough stretch of road.

Ken’s description from this junction: “At a “T”-shaped intersection, bear left (10.6 miles). From just beyond here you’ll travel most of the rest of the way on high plateaus. The road gathers a lot of standing water and deep mud in shady spots – if it’s not bone dry, be sure you know what you’re getting into before you drive through wet spots.  Keep right one mile later (11.6 miles) on FR087. [This junction is signed. If you go straight it will take you south to Buck Park and also to Peak 7549.] Stick to the main road and follow it to its end about 2 1/2 miles farther on.”

I can add the following to Ken’s narrative: there are several spots along the route that will hold blocking snowdrifts until mid-July most years; the wet spots Ken mentioned all had solid bottoms but care is still needed; The road, once it passes the turn for Buck Park, goes up and down and has some rough spots. 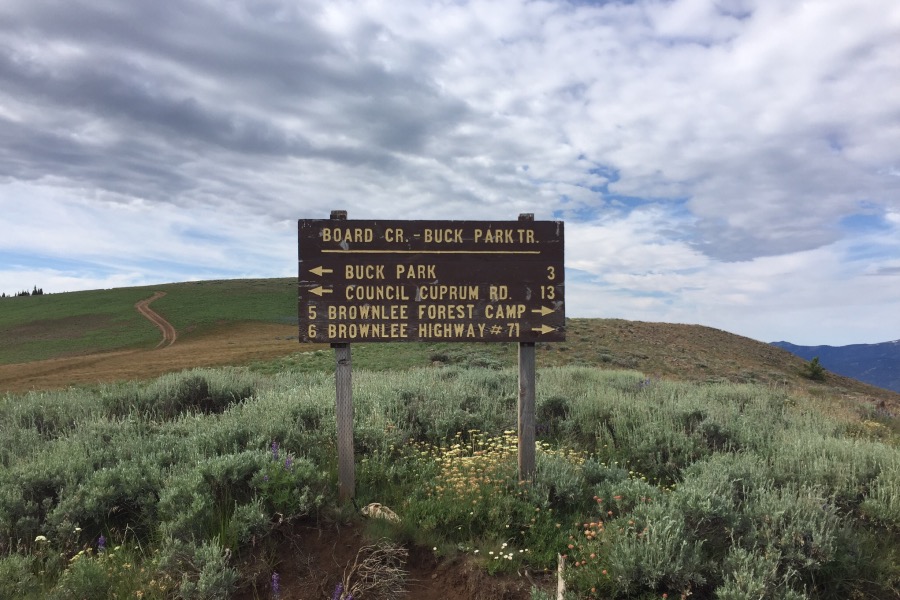 The sign on the saddle between Cuddy Mountain and Cuddy Point.

From the sign you a 4WD track runs toward the summit. Follow it for 0.5 miles and then then climb directly up to the broad summit area where a you will find a benchmark. 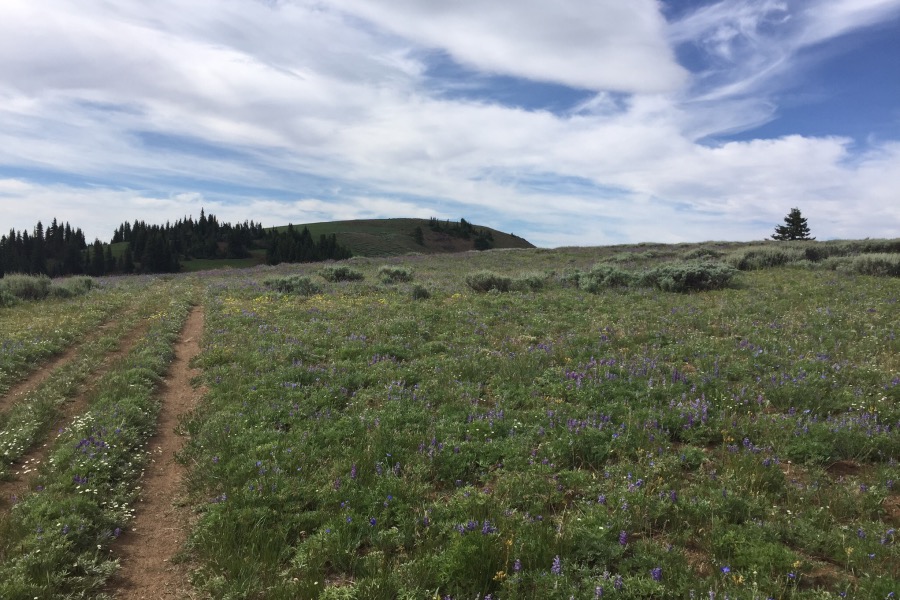 The summit of Cuddy Mountain. You cannot see the sumit from the saddle but after walking a short way you will see it.

The benchmark on the summit. 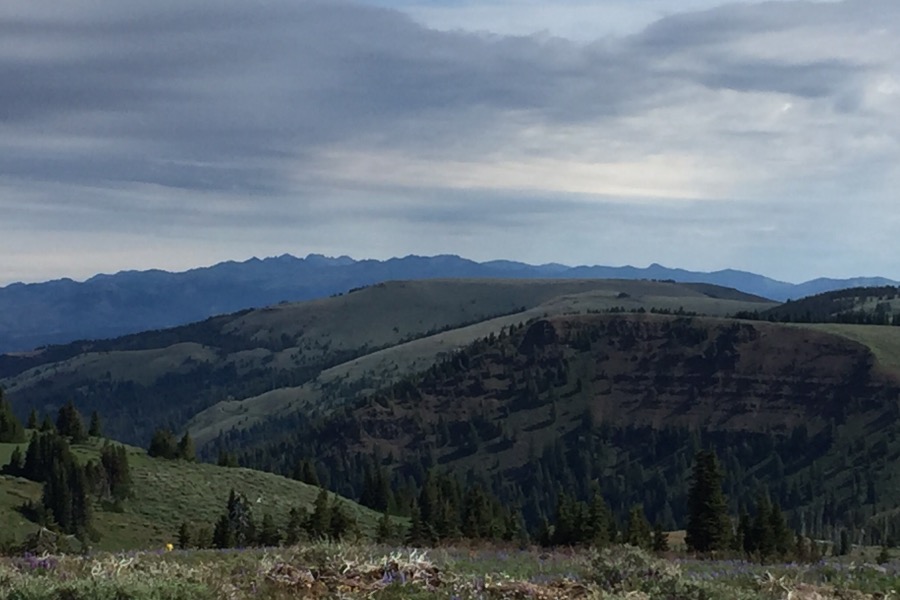 The Seven Devils from Cuddy Mountain.

The Wallowaws from Cuddy Mountain.

Cuddy Point is not a peak by any measurement. It does offer a good views but not much better than Cuddy Mountain. It’s roughly a 0.5, up and down, miles via a ATV trail from the sign. I should also note that as July 2016 Google Maps mistakenly identifies Cuddy Point as Cuddy Mountain. 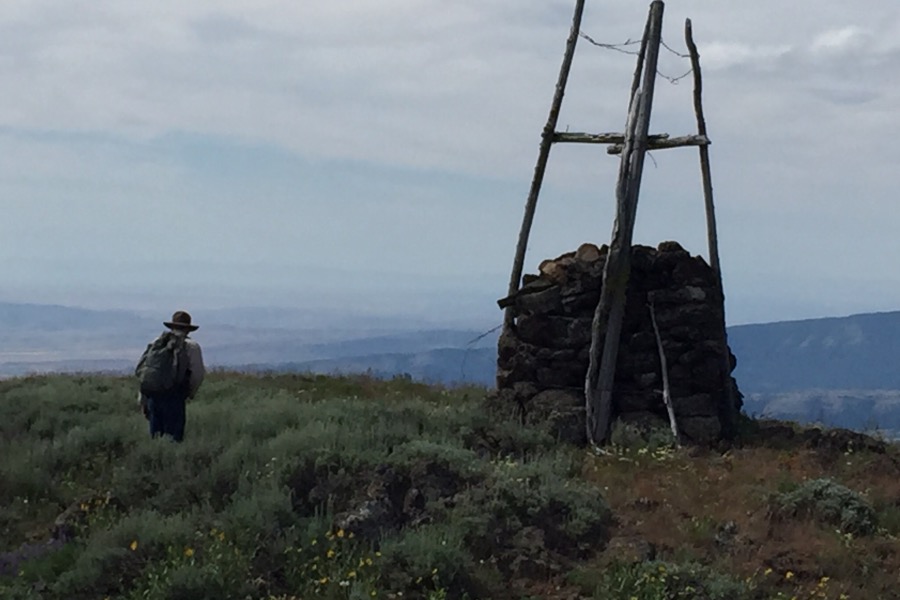