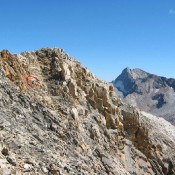 Climbing and access information for this peak is on Page 244 of the book. Pat McGrane’s Wildhorse Classics Guide is the definitive reference for technical climbing routes on Devils Bedstead West.

The standard route up this beautiful mountain is the West Ridge. The saddle at the bottom of the West Ridge can be reached from Kane Creek but the easiest route is via the Summit Creek Trail [(A)(3)(a) on Page 258]. In the book, I suggested traversing the ridge line from the top of Summit Creek to the saddle. While this is a feasible route, there is a more direct route.

In June 2001, I hiked the Summit Creek Trail for the first time in over ten years. Once I arrived at the top of the drainage and looked down into Kane Creek, I observed the trail that drops from the saddle into Kane Creek. This trail shows up on the U.S. Forest Service map. What I did not expect to see was another trail climbing from the top of Kane Creek to the saddle on the West Ridge of Devils Bedstead West. I do not know when the trail was constructed or who constructed it, but it was not there in 1980. The trail is steep but has a good tread for most of its distance. This new route makes it a lot easier to get to the top of the peak than the route suggested in the book. USGS Phi Kappa Mountain 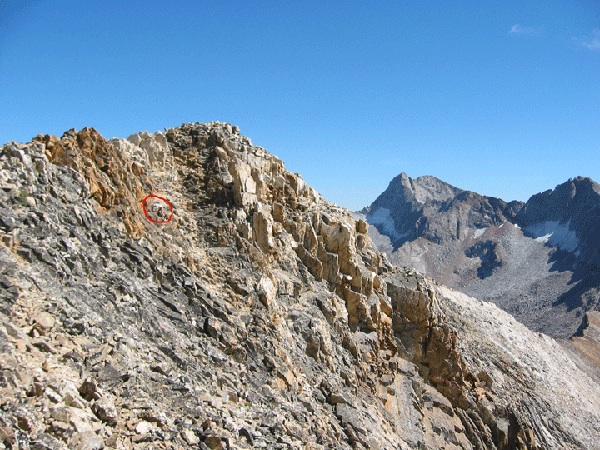 The summit of Devils Bedstead West. Julie Platt is in the red circle. John Platt Photo