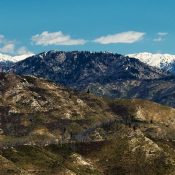 This peak is not in the book. Published May 2020

Dog Mountain is located southeast of Trinity Mountain at the southern end of the Trinity Mountains crest. I had a clear visual of Dog Mountain from Granite Mountain the previous weekend and determined that it was prominent summit which would have great views. Additionally, it was mostly snow-free in early May! USGS Featherville 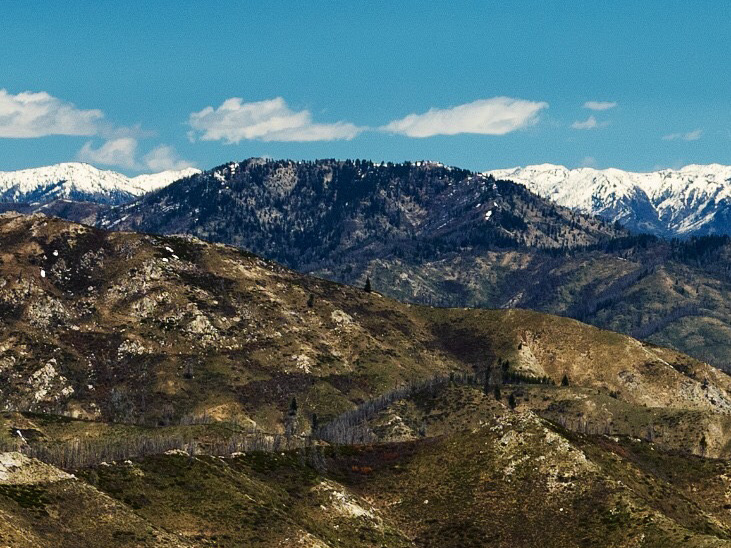 Access starts in Pine, Idaho. Google Maps will provide good directions to Pine. Take FS-128, Lester Creek Road, south out of Pine. This road runs south along the reservoir and eventually turns west, climbing up Sloan Canyon. FS-128 then turns north running past the Lester Creek GS. Stay on FS-128 until you reach Camp Creek. The turnoff for the Camp Creek Trailhead is signed. Although some maps identify the spur road, FS-128BA, as a jeep road, I had no problems taking it slowly to the trailhead in a passenger car.

The trail itself FST-177 is in great condition and half in the shade (to our delight on a hot day).  While the official trail map shows it going west of Camp Creek up to the saddle at 6520, the trail has been rerouted to switchback up to the east. At the saddle, the trail descends about 100′ and deteriorates briefly with quite a bit of downfall to pick through.  At about 3.75 miles from the TH, the trail starts to veer sharply west. Leave the trail at this point and bushwhack northeast up the peak’s southwest ridge to Point 7706 and finally northwest to the Dog Mountain summit.

As you reach the crest the long summit ridge begins near a small shed with solar panels.  The ridge itself extends NW for a ways with fairly large north-facing drifts and a few talus blocks to high point. The 7,762 foot summit is a rocky outcropping at the far NW end of the ridge.

On the way down, we found it a little easier to sidehill west around Point 7706 on a faint game trail, and from there avoided the worst of the brush by making our way more south than southwest to return to the trail and follow the same route back to the trailhead. This route is a little less than 10 miles and around 3,000 feet of cumulative gain. A very enjoyable day! 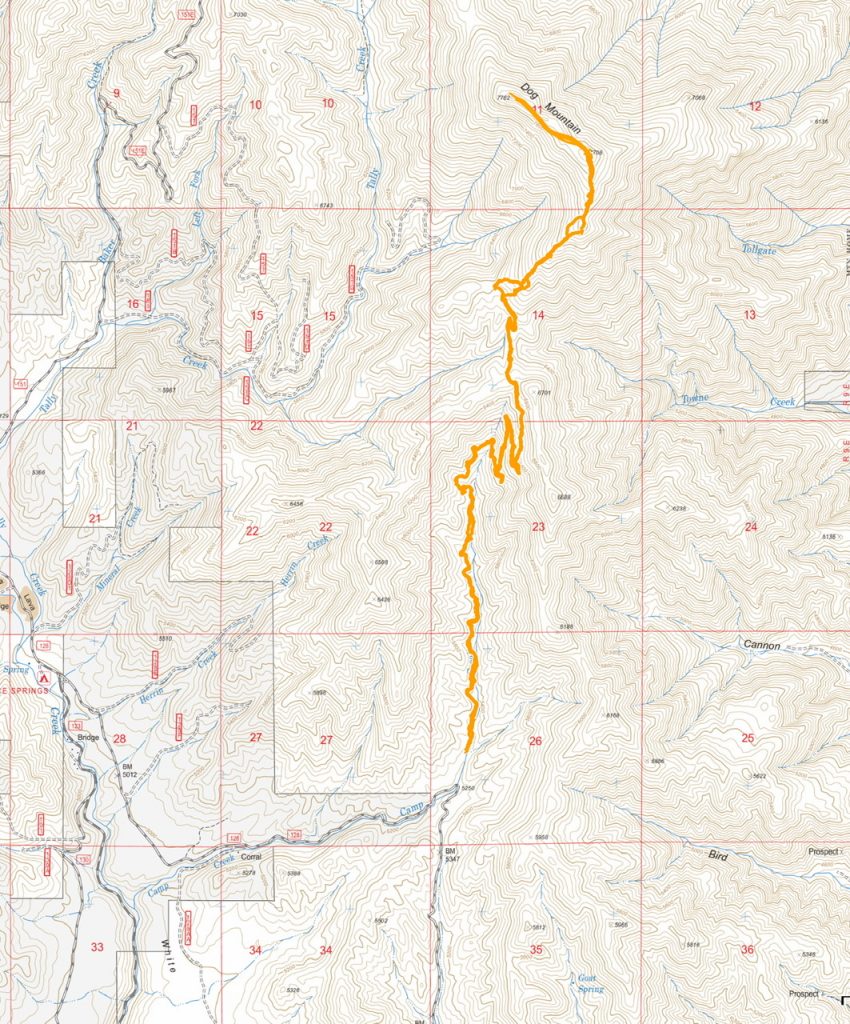 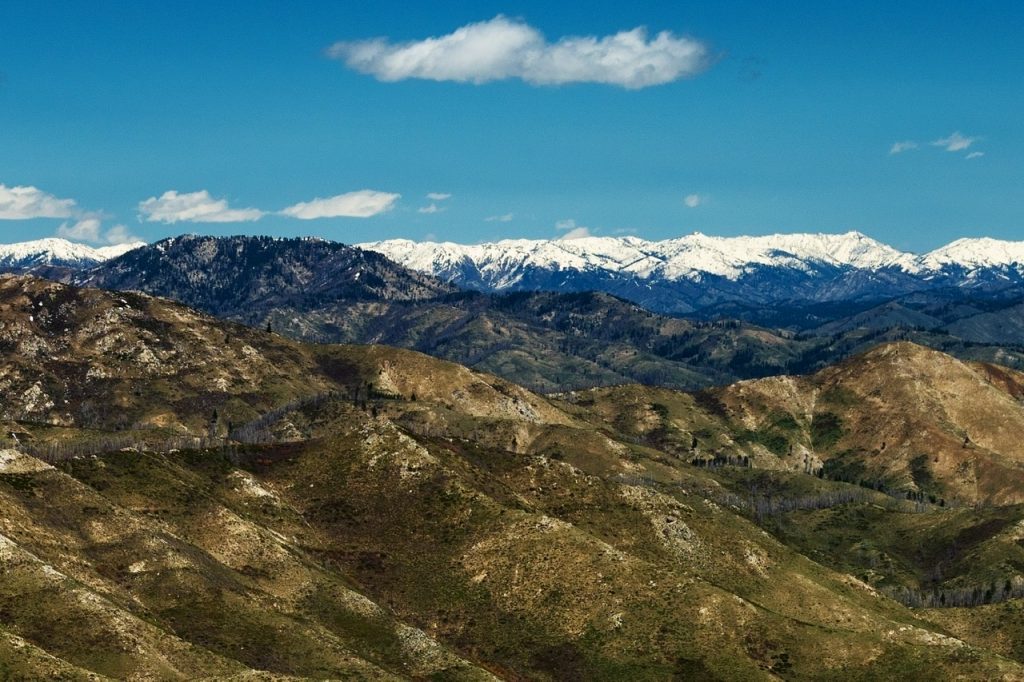 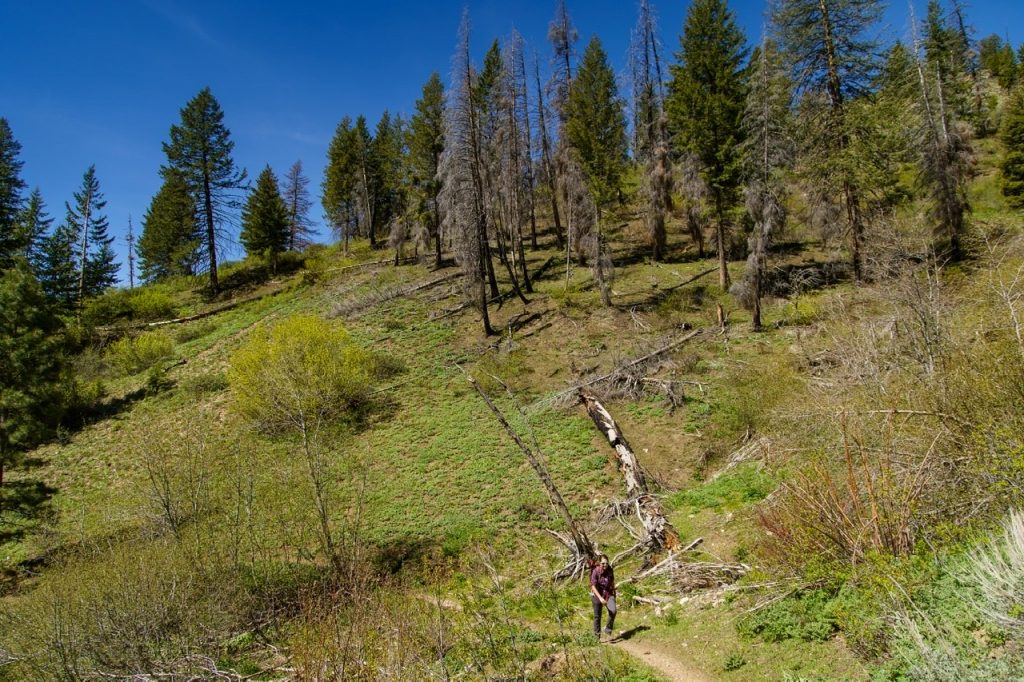 FST-177 on the climb up. Anna Gorin Photo 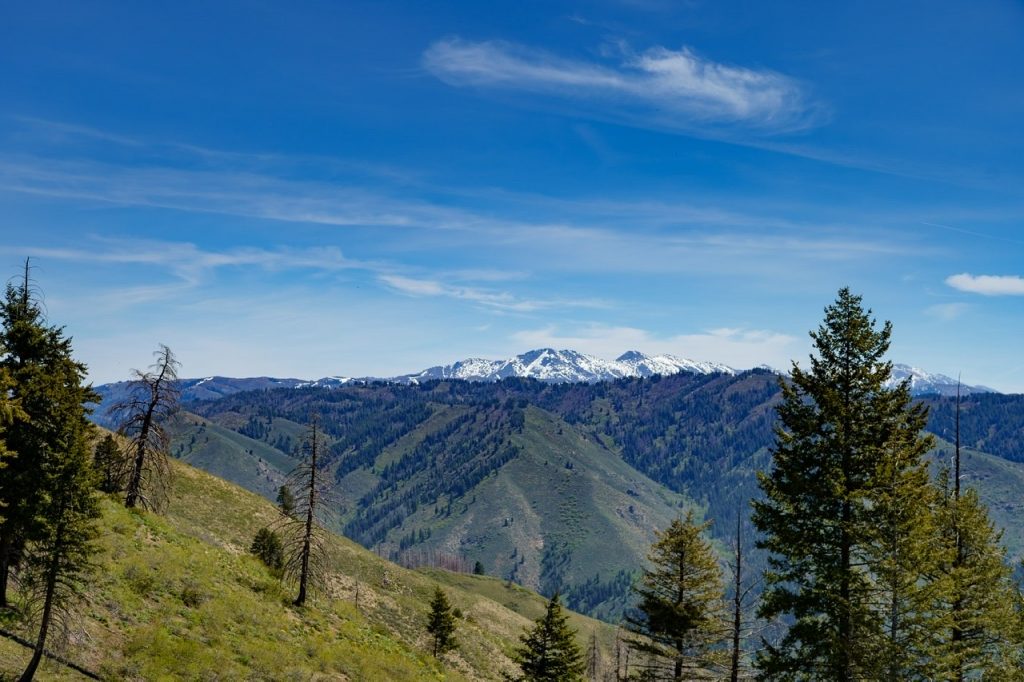 Views of the Soldiers appear around 3.5 miles. Anna Gorin Photo 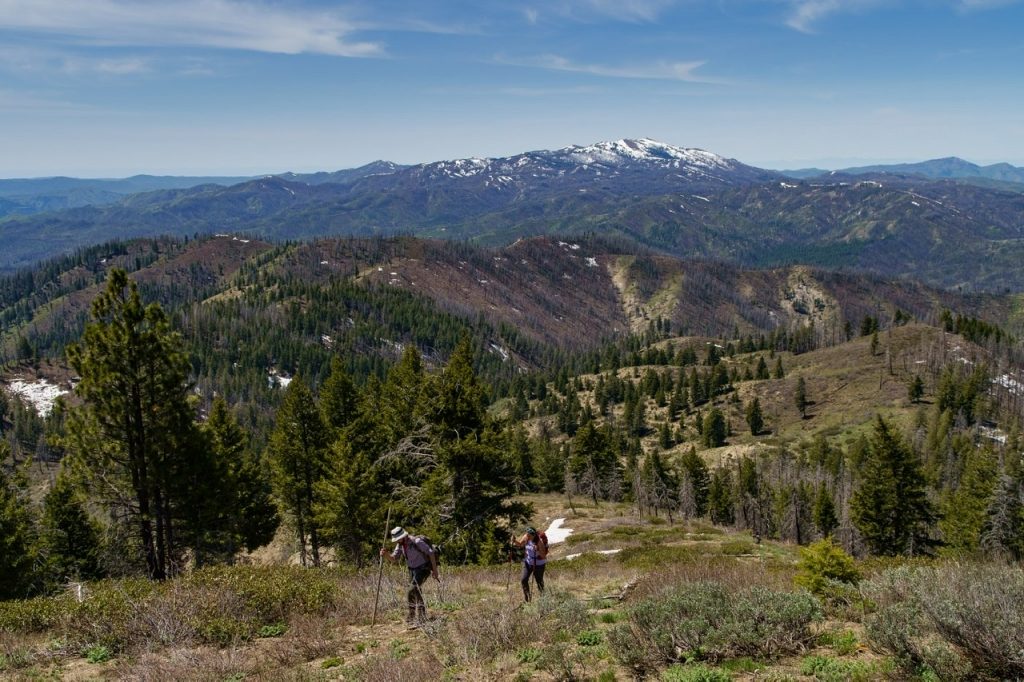 Bushwhacking up the southwest ridge with Granite and House Mountain visible in the distance. Anna Gorin Photo 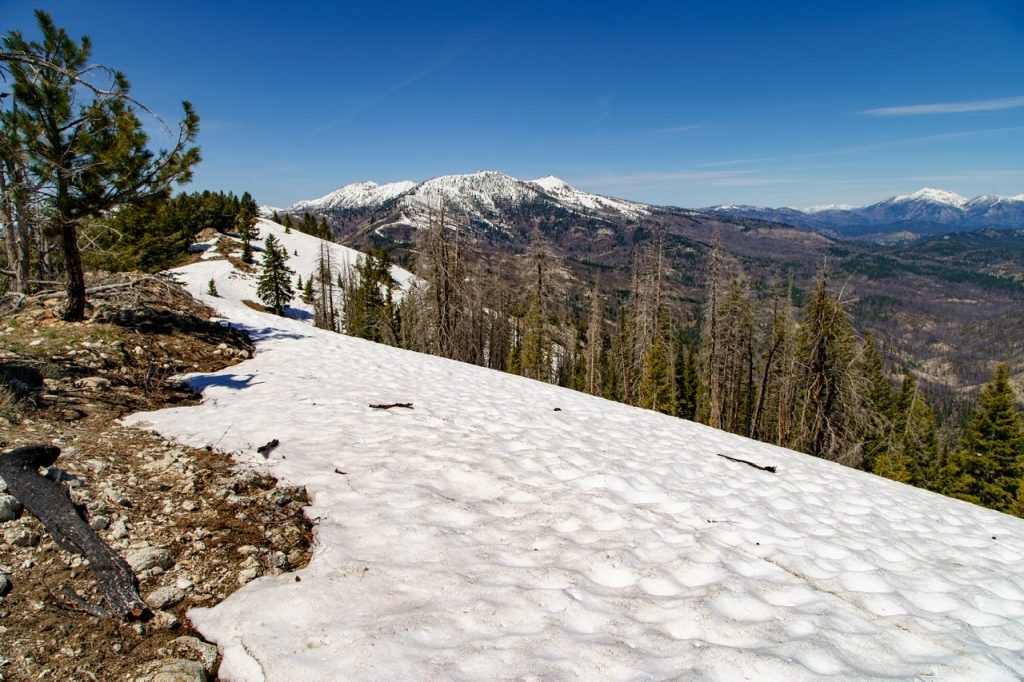 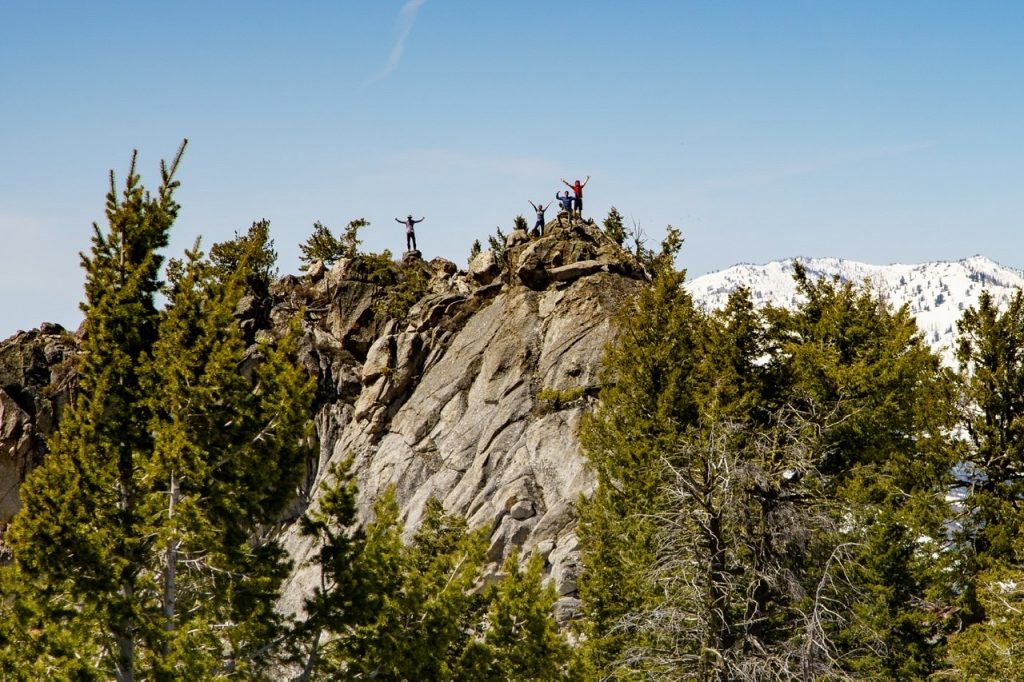 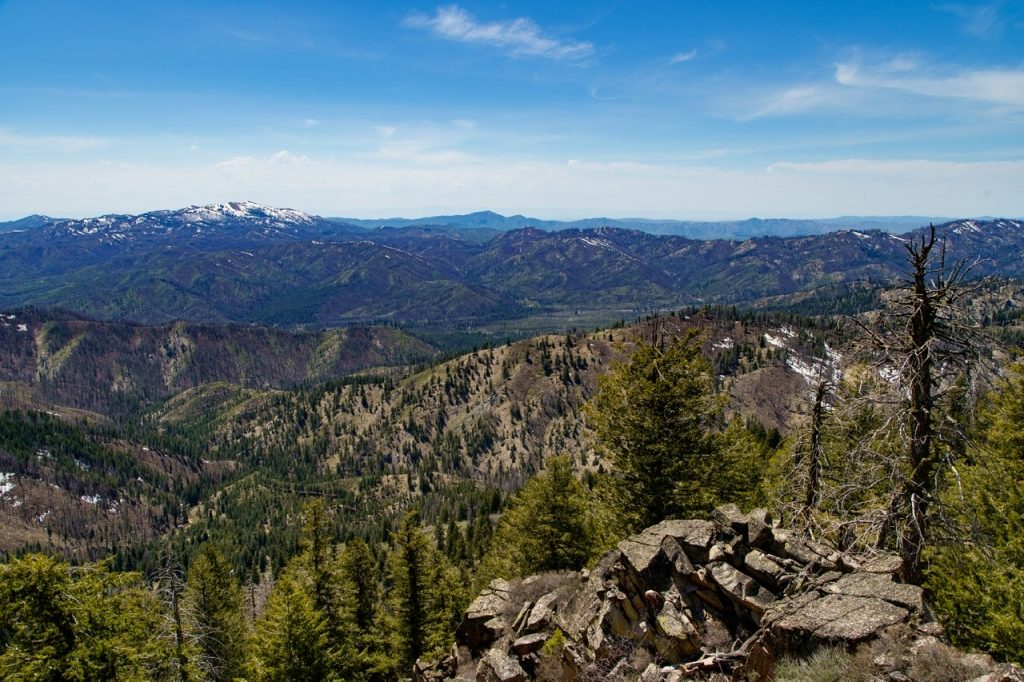 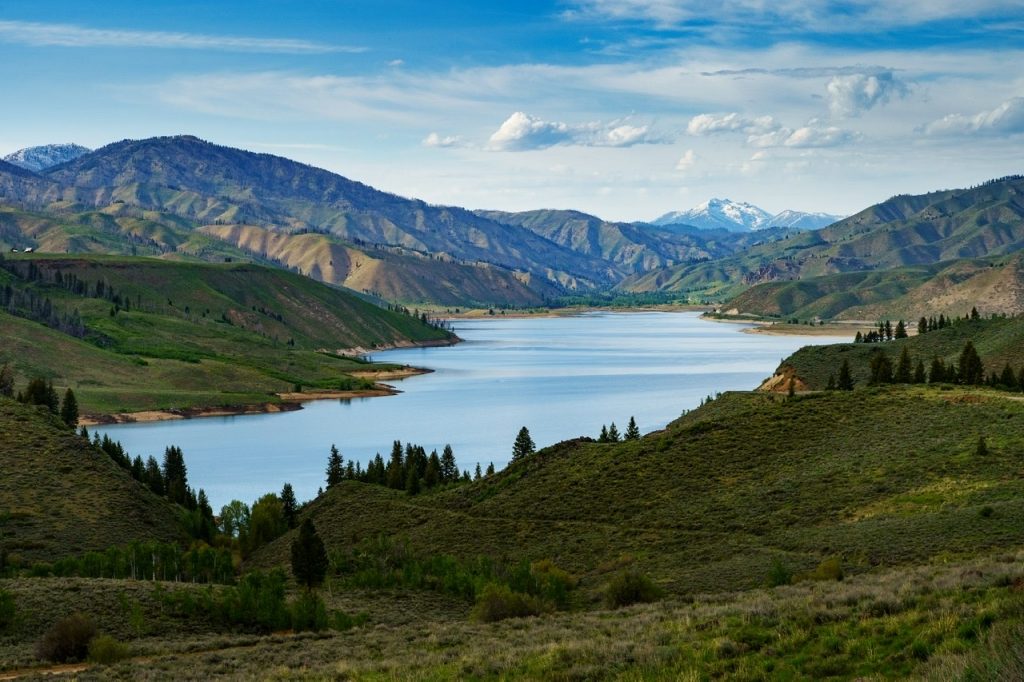 Forested Dog Mountain at left and snowy Steel Mountain at right above Anderson Ranch Reservoir on the drive out. Anna Gorin Photo