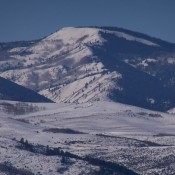 This peak, the highest summit in the Webster Range, is not in the book. Rick Baugher provided the first update found below. Livingston Douglas supplied the second update. USGS Stewart Flat. Updated November 2018

The Webster Range, the eastern extending finger of the Peale Mountains, is the headwaters source of the Blackfoot River. It extends for 25 miles along the Idaho side of the ID/WY border. Draney Peak was occupied for triangulation by George T. Hawkins in 1911. The peak was named for the Draney Ranch along Smoky Creek at the eastern base of the mountain. Both “Webster Range” and “Draney Peak” first appear in print on the USGS topographic maps published in 1915. As a result, 2015 is a most appropriate time to celebrate the centennial of many newly named mountain features, as well as first ascents, in Idaho.

Drawing from my 6/23/01 notes on Draney Peak: Drive south through the long idyllic valley of upper Blackfoot River. At Bear Creek, the westside base of the Webster Range, hike east up Bear Creek on an ATV trail open to motorcycles. As the ATV trail steepens, hike to the main Webster crest. Go north, then east to Draney Peak. I was suprised to see no sign of the 1911 USGS triangulation station and so I built a small cairn and left a register.

This is majestic fir forest and bright cheery meadow country. Surrounding clear-cuts and phosphate strip mines are visible, but these scars are healing nicely. Returned to the Webster Crest by completing the circular Draney Creek ATV trail. Lots of names carved on aspen trees; the oldest date observed was 1926. In subsequent years, I have developed a healthy respect for some of the less-accessible peaks scattered along the Webster Range, but that’s another story. 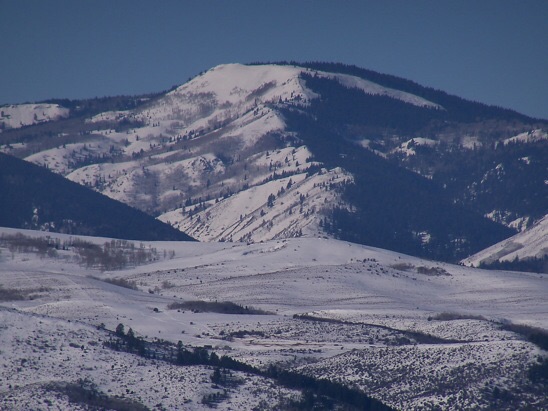 The East Aspect of Draney Peak (1/20/14). In the foreground is Tygee Ridge on the Idaho/Wyoming border. Rick Baugher Photo

From the Bear Canyon trailhead (FST-123), hike eastward up this generally steep, but good, ATV trail just over two miles to reach the well-signed crossing of the Webster Ridge Crest at 8,230 feet. This is also a major trail junction. Unfortunately, the trail signs here are old and outdated. The Bear Canyon Trail/FST-123 ends here. The Webster Ridge Trail/FST-110 goes both north and south here. The southbound FST-110 heads southeast up the ridge. The northbound FST-110 goes briefly north then drops quickly to Draney Creek and turns hard east to follow the south side of Draney Creek downstream. After about a half-mile, FST-110 leaves Draney Creek and turns hard left/north to climb up to the west ridge of Draney Peak and beyond. At that turn, the main trail becomes FST-111/Draney Creek trail and descends eastward down the Draney Creek drainage. All of these trails (FST-123, FST-110, and FST-111) are ATV trails.

If you wish to stay mostly on trails to reach the summit of Draney Peak, then go north on FST-110 from the “well-signed crossing” on Webster Ridge and follow FST-110 all the way to the upper west ridge of Draney Peak. Bushwhack eastward up the ridge about ½ mile to reach the summit. If you’d like more of a challenge, you can repeat the Baugher route (as I did). Here are more specific details on that route. Please note that the USGS topo map does NOT show the Webster Ridge Trail/FST-110 either northbound or southbound. It only shows the Bear Canyon Trail and the Draney Creek Trail.

The well-signed crossing of Webster Ridge isn’t at a saddle. You will drop 20 feet or so and THEN you’ll be at the saddle. FST-110 then drops right-ish off the saddle to descend to Draney Creek. Leave the trail here to climb the south spur. This spur leads directly to Point 8961, which is due west of Draney Peak. You can either follow the spur all the way to Point 8961 and then drop to the 8,770-foot saddle just east of it or, better yet, avoid the extra uphill by angling northeast from the spur into a wide, easy, dry gully on the right/east side of the ridge and then scrambling north to the saddle. I chose the latter option.

The climb up the south spur is forested initially and has an old use trail on it. This use trail morphs into a game trail and then no trail. The bushwhack is up through a mix of forest and veg; it’s not too difficult. When you reach tree line, continue northward up the spur. You can now see Draney Peak to the east. It seems MILES AWAY with two drainages separating you from the peak. In actuality, it’s only about a mile away and you will avoid all of the ugly drainages in between. Leave the spur at 8,750 feet in a flattish ridge area. Do a descending diagonal traverse rightward (dropping only 50 vertical feet) into the center of the wide, gentle gully.

Scramble north up the easy, open terrain in the gully then angle rightward/northeast to intercept the west ridge above the saddle [you can also scramble up to the saddle and climb the west ridge from there, but it will add a bit more mileage to your hike]. The terrain from the gully up onto the west ridge is mostly sagebrush with gaps in it. Weaving is the operative word here. You should reach the west ridge proper at Point 8972, where you will find some small patches of trees with hunters’ camps in two of them. You will also stumble upon FST-110 (yes, the ATV trail you left back at the head of Draney Creek). It follows the south side of the west ridge here then drops to a minor saddle at the base of the final, forested push to the summit. FST-110 turns R/S at this saddle and descends a prominent drainage below you.

From this saddle (8,930 feet), bushwhack east up open terrain that quickly becomes forested. The USGS topo map incorrectly shows open terrain all the way to the summit of Draney Peak. You will wish it were that way in real life, because the forest bushwhack is somewhat tedious with lots of blowdown to slow you down. Stay on the ridge crest or just south of it and keep pushing your way upward. When you do reach some short sections of open terrain, they are clogged with thick desert scrub and are slow going.

You finally emerge into an open area that appears to be the high point but, alas, it is NOT. It is covered with desert scrub (no trees), so you have good visibility here and you can see that there is a rocky outcrop to the south that appears to be a bit higher than where you are standing. And you’re right. That rocky outcrop is the summit of Draney Peak. It is a slanted block of rock and, thankfully, it’s not too far away (perhaps 100 yards). Navigate through a bit more desert scrub to reach the open, airy, rocky perch that is the top of Draney Peak and enjoy the magnificent views. The summit has a USGS BM in a nearby ground boulder. There was nothing else on top, so I built a modest cairn with the loose talus that I could find.

Same as for the south spur/west ridge

The west ridge is a LONG ridge (about four miles from the summit down to Diamond Creek Road). From the summit, descend the west ridge back to Point 8972 (please refer to the south spur/west ridge route for more details on this section of the west ridge). From there, continue to follow FST-110 westward as it descends to a saddle at 8,770 feet. Leave the trail here and climb a steep headwall that is the east face of Point 8961. Descend southwest off this point not west. I repeat—do NOT descend west off this point or you will end up descending down a steep drainage that leads to Coyote Creek. The west ridge of Draney Peak is a bit convoluted from here, and this is the crux of the route. You MUST find the continuation of the west ridge down at 8,800 feet. That area is where the ridge turns due west and becomes well defined. I descended a little too far southwest and had to contour across angled desert scrub to reach the west ridge. It is difficult to find the ridge but it is doable. If you mess it up a little (as I did), then correct your mistake and get over onto the ridge. I cannot stress how critical this is.

The west ridge is rounded, but you will still be able to see the massive drainages on either side of the ridge. After you descend the open terrain for a bit, you will stumble upon a MIRACLE. Yes, this is a miracle. The long bushwhack down the west ridge is about to get MUCH EASIER because, much to my surprise, there is an old jeep track that runs along the ridge crest all the way down to the valley floor. This old jeep track is a mere footpath at times but at other times, it’s quite strong and eventually becomes a decent jeep road (at least for hikers and hunters). The west ridge weaves around a bit, and so does this jeep track. And, while the old road adds some mileage to the hike (due to a LONG switchback lower down), it is a FAST way to cover the mileage.

This old road/track is NOT on any map, so where on Diamond Creek Road is it going to end? Here’s exactly how it plays out. When you reach the 7,300-foot level, the road takes a sharp LEFT turn to descend a switchback in a southeasterly direction heading down to a gully. Not exactly where I wanted to go, but it turned out to be brilliant. When the road reaches the gully, it turns right/south and soon dead-ends at another, better jeep road (a “T” intersection). This road isn’t on the map either. Have you ever “flown by the seat of your pants”? Well, that’s what I had to do here.

Just keep heading toward Diamond Creek Road, directionally-speaking. Go right/west on this “better jeep road” and follow it for 0.3 miles to where it dead-ends at another “T” junction at a really good jeep road. Go left/south on the “really good jeep road” (this turned out to be FSR-629) and follow it south then right/west as it bends its way down to Diamond Creek Road in about ½ mile. Amazingly, this road (FSR-629) reaches Diamond Creek Road only 0.1 miles north of the Bear Canyon Road/FSR-235. Hike south on Diamond Creek Road for 0.1 miles then follow Bear Canyon Road 0.8 miles to the Bear Canyon trailhead where you are parked. Today was the first day of archery season and I ran into a bowhunter on the lower reaches of the old jeep road up on the ridge. I suspect that the old road is used mostly by hunters, certainly not by hikers.