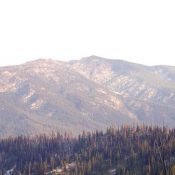 Climbing and access information for this peak is on Page 71 of the book.

Elk Mountain is the highest mountain of several clusters of granite peaks found inside the curve made by the Selway River as it flows north then west. It is the tallest of the Clearwater Mountains between the main Bitterroots near Montana on the east and the Gospels on the west and between the Selway Crags on the north and the divide between Bargamine Creek and Running Creek on the south, which is the divide between the expansive Clearwater and Salmon Basins.

From the peak’s summit in the center of this approximately 1,300 square mile area (nearly one million acres), tremendous views are dominated by the numerous peaks of the Idaho Batholith and the high Bitterroots along the Idaho Montana border to the east. Smaller, but apparently endless, mountains extend to the south and west. The closer views are marred somewhat by the extensive fires of recent years that have left a landscape covered by a spindly blackened and bleached skeletal forest.

Along with the ridge to the west, the Elk Mountain area may host the largest extended population of the beautiful endemic plant, Idaho Douglasia, a stunning wildflower that was only described by botanists in the early 1980s. Debris on the summit indicates some sort of lookout or station was here, though this does not seem to be recorded on such lists. USGS Running Lake 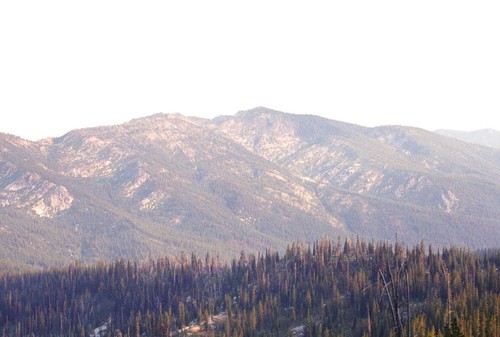 Elk Mountain as viewed from the northwest. Mike Hays Photo 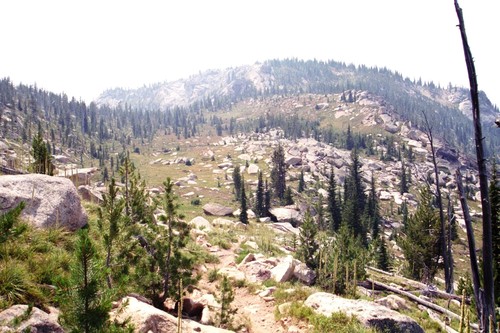 Elk Mountain is not only the highest peak in the area but is by far the most massive. The summit area maintains substantial bulk into the highest elevations. The north and south ridges extend over a 3-mile long area with substantial high points. A spur ridge south of Running Lake is capped by spectacular rocks and spires. Running Lake occupies a huge glacial cirque on the east side of the mountain that is the source of Running Creek, which flows into the Selway River after dropping 5,000 feet in a few miles. To the west, the summit drops over 4,000 feet into Meadow Creek via the slopes of the Schwar and Spook Creek drainages.

There are three large cirques on the east side of the mountain. Besides the cirque holding Running Lake, the rugged basin separated from that lake and the main south ridge of the mountain holds two small lakes in a subalpine setting. The northern basin is below the 500-foot cliffs of the main north ridge point. All of the mountains in this area are formed in unusually decomposed granite that gives the ground a white powder texture with very little soil development. Large, irregular boulders are scattered along these powdery ridges and summits.

Running Lake is the largest mountain lake in the area and sits 1,500 feet below the summit in a huge cirque. The ridges enclosing this lake are steep and cliffy with some high granite spires. The lake is heavily used despite the difficult hike to reach it. There are at least three other small lakes or ponds on the flanks of the mountain. The western slopes have also been influenced by alpine glaciation, but to a lesser extent. The cirques are less defined and the often-forested slopes are more gentle, but still steep in many areas.

The primitive Elk Mountain Road passes between the Selway-Bitterroot Wilderness and the large Meadow Creek roadless area. Meadow Creek is managed much as a wilderness area, but some motorized vehicle access is allowed on some trails. The area is becoming controversial as different factions argue for their interest in the area. Many would like to see it designated wilderness. However, the area was excluded from designation as part of the compromise that created the massive Frank Church River of No Return Wilderness.

Some would like to see it managed for timber and other resources as intended when it was excluded from designation. It is doubtful that the Forest Service would enter the basin for timber purposes, but it will likely never be managed as wilderness. In the Fall, hunters are common in the area with many four-wheelers on the road and stock men on the trails. Use caution during this time and wear orange. A lot of wolves live in the area, so seriously consider leaving the dogs at home.

The peak is accessed from the Magruder Corridor and the Elk Mountain Road. From the road’s end on the slopes of Elk Mountain, a short 1-mile hike on well-used trails takes you to the summit. The trail climbs gradually to the small saddle above Running Lake at the south end of the summit ridge. From this saddle, it is a short but steep hike up the South Ridge to the summit. Move slightly to the west, where the slope is still very steep, but more navigable. If averse to steep slopes, continue northwest and west for less than 0.5 mile to where the trail crosses the broad, flat West Ridge of the mountain. Then follow that ridge to the east for a more gradual hike to the summit.