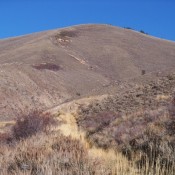 The Peale Mountains have been described as a wrist with fingers extending. If this is so, then Rasmussen Ridge is a hangnail. Southeast Idaho has a greater concentration of named mountain features than anywhere else in the state. This is due partly to the compression-extension topography of the Overthrust Belt. We also can thank government scientists like section chief George Rogers Mansfield who, along with his team of geologists and surveyors, cataloged this land in the early decades of the twentieth century.

The 7-mile long Rasmussen Ridge is tightly bounded by the Grays Range to the northeast and two valleys to the southwest: Enoch and Rasmussen. Between these two valleys and on the flank of Rasmussen Ridge is a large active phosphate strip mine. There are two ranked 7’ers on Rasmussen Ridge. Both can be combined as separate hikes to make an enjoyable day outing, thus giving the peakbagger a quickie range completion.

Enoch Peak (7,819 feet) is the high point of the Rasmussen Ridge. Knowing where to start is key. Any approach from likely-looking Enoch Valley Road is blocked by private land. Instead, come in from Upper Valley and drive NW up Rasmussen Valley Road. There is a nice staging area adjacent to the private mining haul road within sight of the Agrium mine facilities. Ride a two-track north for 2 miles on State land. Hike NE, crossing a restoration area of decommissioned strip mine. The chunks of black carboniferous rock fragments you see are part of the Permian Phosphoria Formation.
Earth-moving equipment would collect this. It is crushed, put in a slurry, and sent to Conda or Monsanto for further processing, until you have fertilizer for your garden. 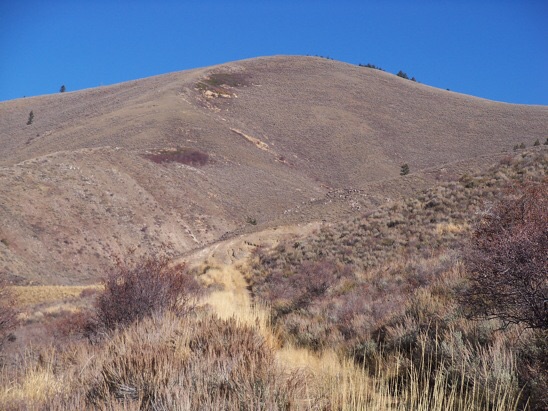 Reach the summit of Enoch Peak by ascending the low brush open slope of the Southwest Face. The spur shown here offers the line of least resistance. Rick Baugher Photo 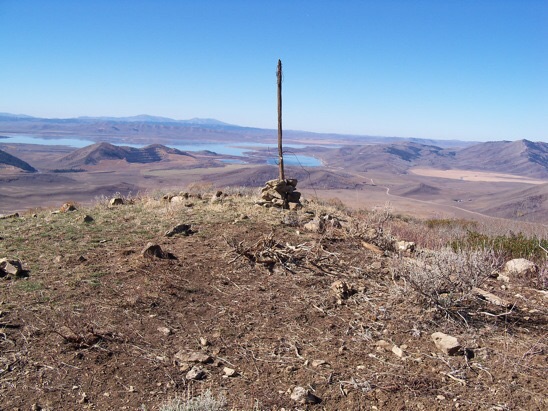