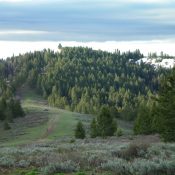 Flag Knoll is a ranked summit located right next to Skyline Road. It is an easy hike from the road via an old, abandoned ATV road (now signed for foot traffic only) that is not shown on maps. The summit offers great views of the surrounding peaks. Flag Knoll has an impressive 689 feet of prominence so it is a worthy objective. USGS Commissary Ridge 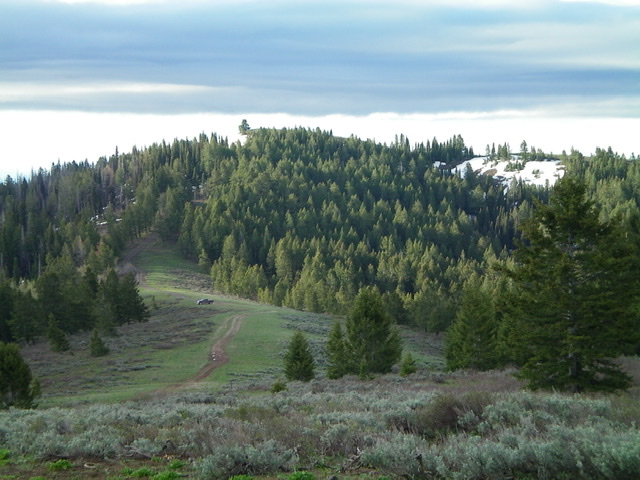 Flag Knoll (the summit is left of center) as viewed from nearby Beaver Ridge to the northwest. Livingston Douglas Photo

Follow the steep, rocky, rutted old ATV road to the summit. This is a very short climb and a very fast descent! The summit of Flag Knoll had no summit cairn so I built one. It has no USGS benchmark as the USGS map implies. The summit is open and offers expansive views of the nearby peaks. 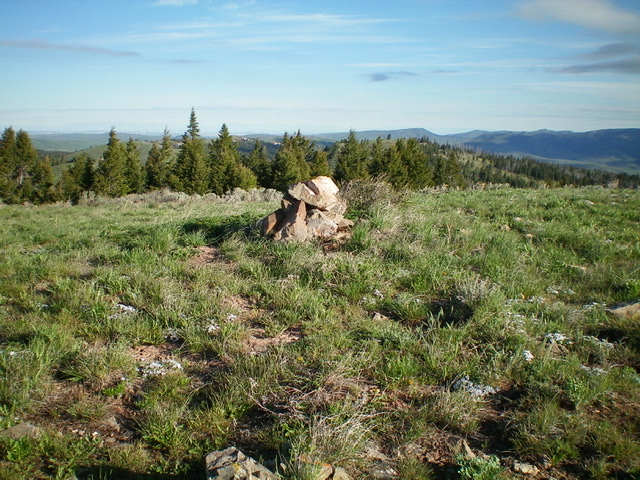 This route is part of a ridge traverse from Flag Knoll to Peak 7428 and Peak 7313 then back to Flag Knoll. From the summit of Flag Knoll, descend the open, scrubby (mostly sagebrush) southwest ridge to reach an open hump (Point 7526). You will find remnants of an old 2-track road along the ridge, but it is only a grassy clear-cut now. From Point 7526, follow the ridge south then enter the thick pine forest and descend southwest to a wide, flat, forested saddle that is thick with brush and blowdown. This is the base of the southwest ridge of Flag Knoll and concludes the first leg of this three-peak adventure. Peak 7428 is up next.