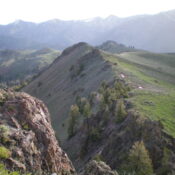 Climbing and access information for this peak is on Page 255 in the book. Published November 2022

Garfield Mountain is a rocky hump that is located on a summit massif that is dominated by [slightly-higher] Bell Rock (8,700 feet). It is most easily reached from the Mormon Hill trailhead by an unofficial use trail that is not shown on maps. This climb is the first leg of a 3-peak adventure that includes Garfield Mountain, Bell Rock, and Peak 8540. USGS Muldoon 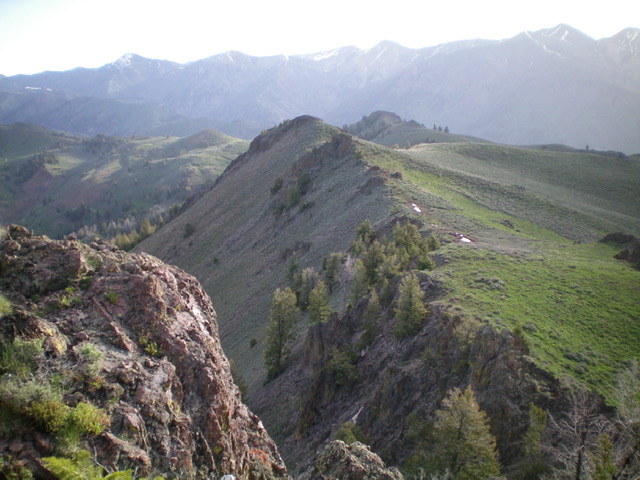 Garfield Mountain (in mid-ground, just left of center) as viewed from the top of Bell Rock. Livingston Douglas Photo

The Mormon Hill trailhead is located at the top of FSR-130. To reach it, drive north up Copper Creek Road/FSR-134 to a signed junction with the Garfield Canyon Road/FSR-228 (which goes to the Garfield Guard Station and beyond). Go left at this junction to stay on FSR-134. About 0.7 miles farther up FSR-134, reach a signed road junction in a large, open meadow. FSR-134 goes right here and follows Copper Creek. However, it is now closed to motorized vehicles and is only a foot trail. Go left up FSR-130 as it begins its steep climb to the Mormon Hill trailhead. A 4WD vehicle is required but high clearance is not necessary. After 2.3 miles from the open meadow, you reach the large trailhead parking area for the [signed] Mormon Hill trailhead (FST-329). There is a horse rail and a bathroom here (7,625 feet). The road is not too bad and people pull horse trailers all the way up here. 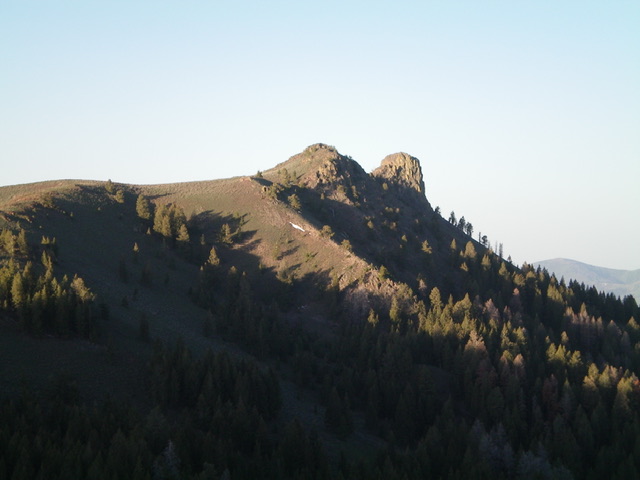 Garfield Mountain (hump in dead center) and Bell Rock (hump right of center) as viewed from the saddle on the south ridge of Peak 8540. Livingston Douglas Photo

The Climb (then Descent)

From the trailhead parking area, bushwhack southwest straight up into the forest and, almost immediately, find a SNOTEL station. Just past it, find a well-beaten horse trail that heads southwest then south up into the pine forest. This trail reaches the ridge crest between Peak 8540 and Garfield Mountain at 8,260 feet, northwest of Point 8381. From this saddle, you have a great view of Garfield Mountain and Bell Rock to the south-southwest.

Continue on the horse trail as it descends diagonally and drops 150 vertical feet to cross a gully/meadow. The trail crosses the gully and heads diagonally south up to an 8,300-foot ridge saddle northeast of Garfield Mountain, skirting three rocky ridge points in so doing. Once at this saddle, scramble southwest then west along the ridge crest to the rocky summit of Garfield Mountain. The ridge terrain is a mix of sagebrush (and other veg) and a rocky underbase with some minor rocky ridge outcrops.

The Descent (then Climb)

From the summit, follow the undulating, rock-and-scrub ridge south-southwest to reach the connecting saddle with Bell Rock. This concludes the first leg of today’s 3-peak journey. Bell Rock is up next. 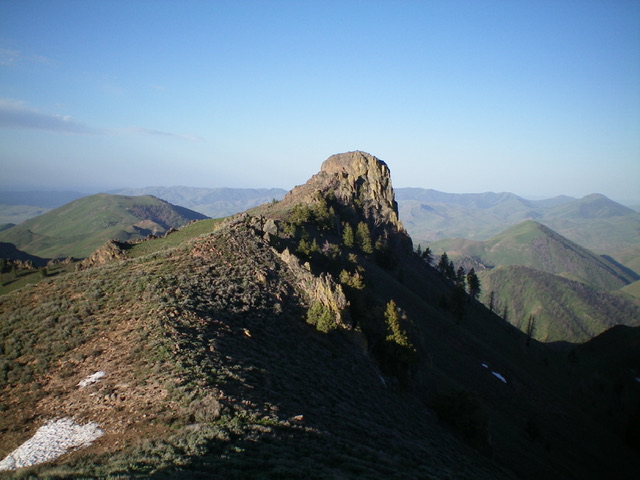 Bell Rock as viewed from Garfield Mountain to its north. Livingston Douglas Photo