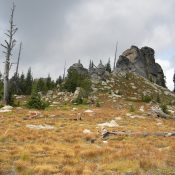 This peak is not in the book. Please note that this is a twin-summitted peak, separated by a 6,600 foot-saddle and 0.5 miles. Both summits have prominence and both are reached via 4WD roads. The second peak is named Peak 6966.

I refer to this peak as Horseshoe Summit which is not its official name. Some sources refer to it as Horseshoe Viewpoint, while others call it Horseshoe Lake Lookout. However, Horseshoe Lake is about 2 miles away. This peak forms a spur ridge separating Howard Creek and Gravey Creek in the upper Cayuse Creek Basin off the main Lochsa/North Fork Clearwater Divide. Horseshoe Summit is one of the highest points along this extended ridge system in the Clearwater National Forest north of US-12.

Horseshoe Summit’s northern slopes rise nearly 3,200 feet above the canyon bottoms of Cayuse Creek and indirectly 4,200 feet above the Lochsa River to the south. A lookout was established here in 1921, but it burned in a 1961 forest fire. Today the large summit area is still open with sparsely scattered trees offering expansive views into the more remote sections of the North Fork Clearwater River basin. The word “Horseshoe” was spelled in rocks to identify the lookout from the air and these rocks remain today. USGS Horseshoe Lake 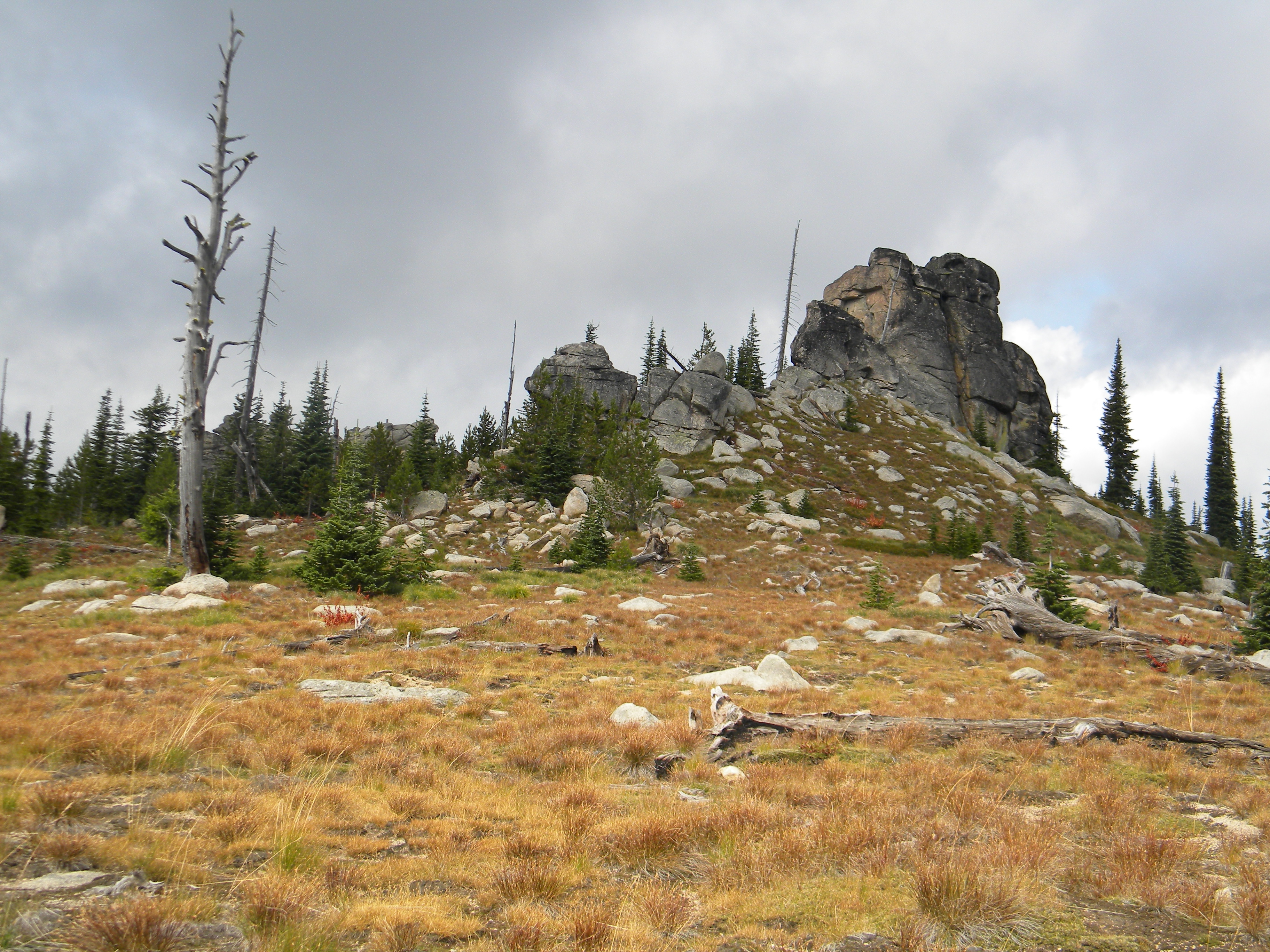 Generally, the summits of the extensive Continental Divide ridge system are not well pronounced. Rather, ridges roll on for many miles with broad, gently waving, unnamed high points. However, Horseshoe Summit is a unique high point along the ridge that forms a well-defined summit. But perhaps its most noteworthy features are the fascinating rock formations found on the wide summit area. Large irregular formations of weathered granite are not uncommon along this otherwise featureless ridge system. However, on the top of Horseshoe Summit, these features are probably the largest and densest to be found. These rocks provide good bouldering opportunities and are popular with photographers.

The history of the area is very significant as Lewis and Clark followed the main divide on an old Indian trail that today is known as the Lolo Motorway. It is in this extensive sea of mountains that the Corps of Discovery had their greatest trials and nearly perished from hunger and harsh conditions. The Motorway is popular today with people tracing the trail of Lewis and Clark and visiting the many significant historic points along the Indian trail.

Access this peak from US-12 and the Lolo Motorway/FSR-500 from either the east or west. The quickest way is to turn off US-12 onto FSR-107 at the mouth of Indian Grave Creek. Follow FSR-107 for approximately 7 miles to Saddle Camp, which is at the junction with FSR-500.

Five roads meet here. Take the first right which is FSR-500. It’s very narrow and the entrance may appear partially obscured by brush. Follow FSR-500 east for approximately 4 miles to its junction with FSR-588 at a point labeled on the map as Howard Camp. Note: the Clearwater National Forest visitor map indicates Howard Camp to be on FSR-588, but signs on the ground and USGS quads label it as occurring at the junction of FSR-500/FSR-588. Where it actually occurs, turn left onto FSR-588 and follow it for approximately 4 miles to its end on the high point of Horseshoe Summit.

FSR-500 is narrow with limited pullouts or places that allow two vehicles to pass each other. If two vehicles meet, someone likely has to back up a long way. If the road has not been maintained or graded recently, then expect some wear on your vehicle. High clearance is recommended and 4WD is a good idea, though other cars can make the drive if one is cautious and takes it easy. If there are concerns, then park at Saddle Camp or Howard Camp, which allows you to hike to the summit in a few miles.

[Editor’s Note: Use this link to read more about the Lolo Motorway.]