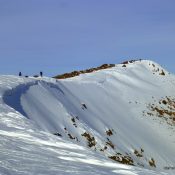 Climbing and access information for this peak is on Page 233 of the book. Livingston Douglas added the North Spur/East Ridge Route. Updated November 2021

Jerry Peak and South Jerry Peak are outliers from the main Boulder Mountains Crest. Both peaks are located in the rain shadow formed by their higher neighbors, the main Boulder Front and the White Cloud Mountains. The two peaks are joined by a unique high, wide alpine ridge with a precipitous west faces. The straight-line distance between the two peaks is 2.1 miles. The 360-degree views from the peak take in the White Cloud Mountains, the Salmon River Mountains, the northern Lemhi Range, the Lost River Range, the White Knob Mountains, and the Pioneer Mountains.  USGS Jerry Peak 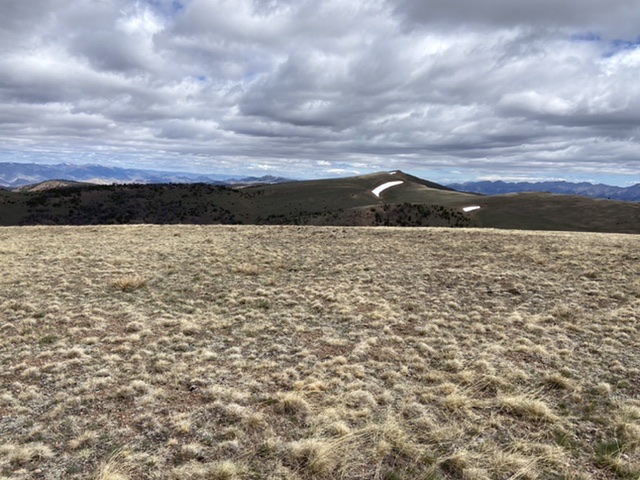 Jerry Peak in the distance as viewed from South Jerry Peak. 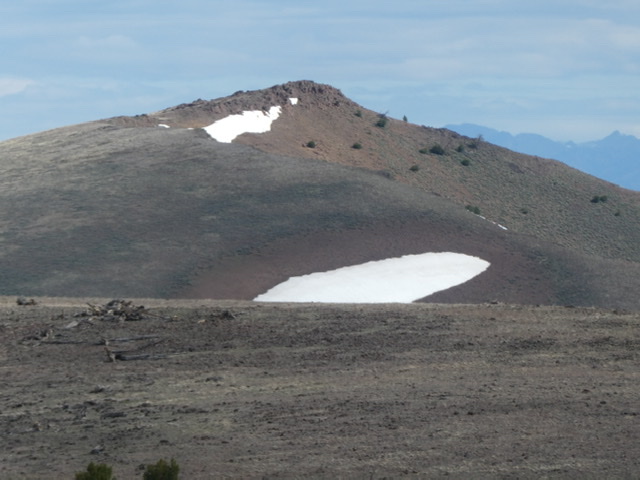 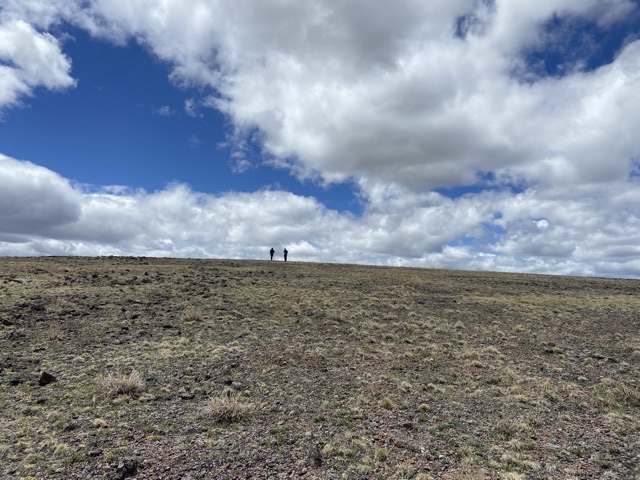 The recommended route is a hike from South Jerry Peak. There are undoubtedly other longer approaches from the east for people to scout out. The Howell Canyon approach would be the shortest but it is closed off by private property. Use the South Jerry Peak page for a description of the access to that peak.

This route crosses the broad, high alpine meadow that joins South Jerry Peak to Jerry Peak. There are no obstacles or route-finding issues. Just point yourself north and hike to the summit. It requires about 2.4 miles one-way, depending upon how much you wander around the meadow exploring this unique environment. 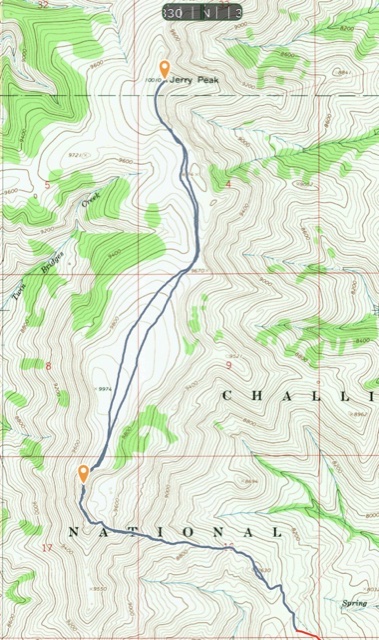 My GPS track for South Jerry Peak and Jerry Peak. Round trip for both peaks totaled 8.6 miles with 2,247 feet of gain.

This climb covers 10.0 miles with 3,525 feet of elevation gain round trip. There is a rectangular-shaped patch of private land (fenced but not signed) on the south side of Corral Creek near the starting point for this climb. It can be skirted on its west side along a fence row. This route is entirely on BLM land. 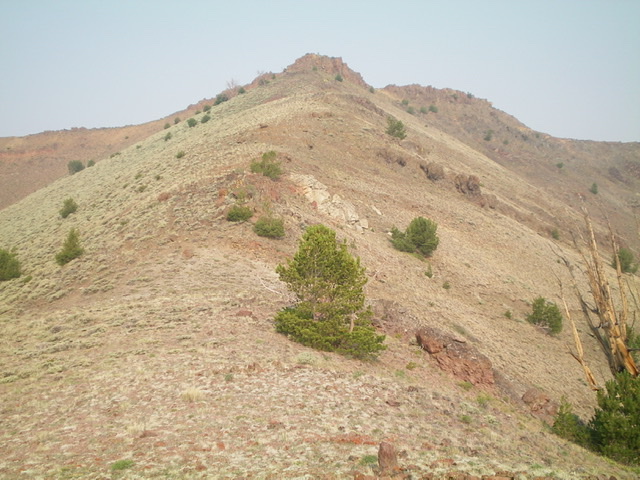 The summit cap of Jerry Peak (dead center) as viewed from high on the east ridge. Livingston Douglas Photo

The terrain on the north spur is typical sagebrush initially but soon becomes easy, open scrub. The spur is somewhat steep early on. From Point 7785, follow the meandering, undulating ridge southwest then south then west to the rocky summit of Jerry Peak. The ridge terrain is mostly short scrub and easy scree with some rocky outcrops high up. There is a fence row on much, but not all, of the ridge crest. Occasionally, there is a weak 2-track (or cattle trail) just off the ridge crest.

At about Point 8072, a 2-track road comes up from Howell Canyon. There is an on-and-off use trail on the ridge crest from here almost to the summit. The extra ups and downs on the ridge add up to about 500 feet round trip. The final push to the summit is on rocky terrain, with a combination of loose, steep shale and rocky ridge outcrops. The summit has a USGS benchmark and a modest cairn. 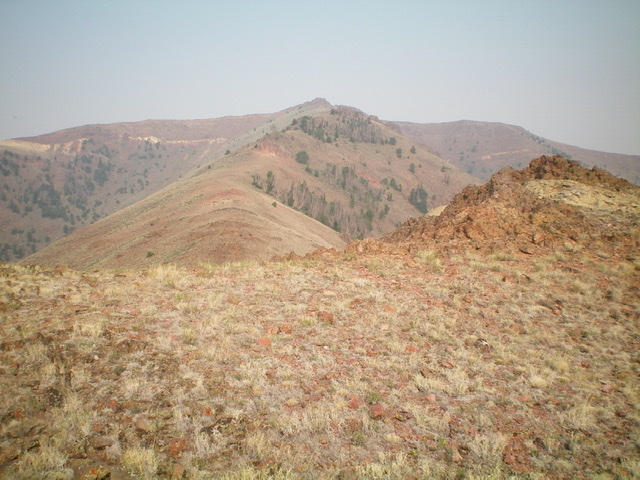 The meandering east ridge of Jerry Peak (summit is in dead center) as viewed from midway up the ridge. Livingston Douglas Photo 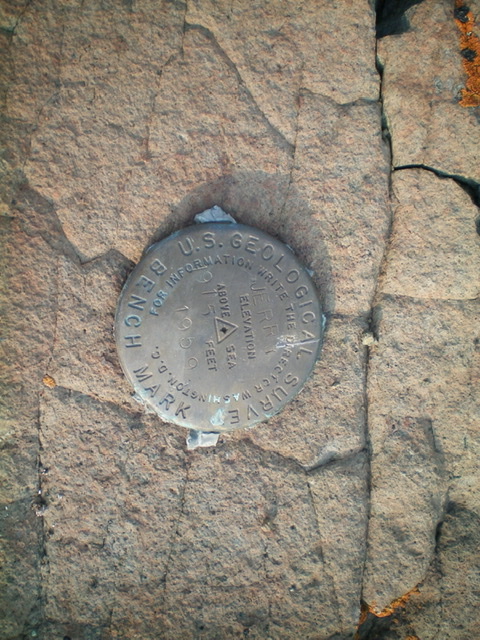 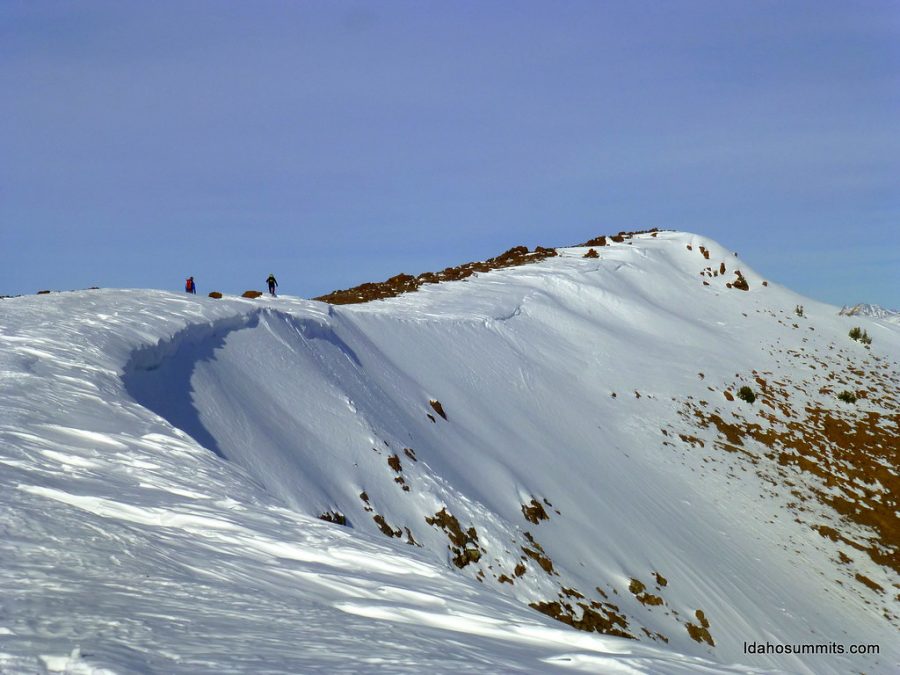