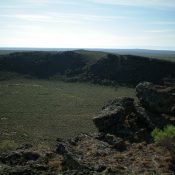 Little Butte, as its name implies, is a little butte located on the south side of US-20 and is east of the infamous “Three Buttes” (Big Southern Butte, Middle Butte, and East Butte). Little Butte is barely visible from US-20 not because of an intervening ridge blocking the view but because Little Butte protrudes only 200 feet from the floor of the Snake River Plain. The USGS topo map shows a jeep road heading from US-20 to the east side of Little Butte but that road is long gone and only has remnants of it near the butte with no signs of it along US-20. You’ll have to find a different way to do this one. And I did. USGS Little Butte 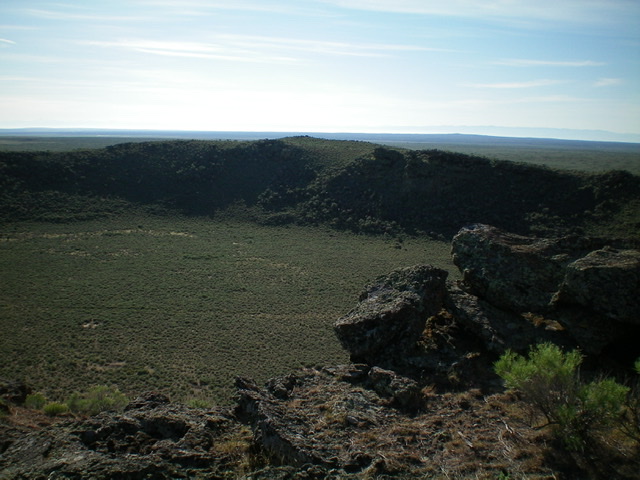 Looking down into the crater east of the true/west summit of Little Butte. The [lower] east summit is on the far side of the crater. See the cattle grazing in the crater? Livingston Douglas Photo

The best public access to Little Butte is via a road to a collection of communication towers just over a mile west of the butte. Let’s call this road “Tower Road.” The road is shown on the USGS topo map and is a decent 2-track road that is quite visible from US-20 as are the towers. It is located at approximately MM 279.5 on US-20 or 3.5 miles west of the Bingham County/Bonneville County line on US-20 (signed) and 27.4 miles west of US-20 from I-15 in Idaho Falls. Tower Road is a distinctive 2-track road in that its base is dark red lava gravel (isn’t that cool?). It is easily drivable by passenger cars. Drive 0.9 miles up Tower Road and park at a cattle gate. Not knowing the road conditions, I parked at the 0.7-mile mark (5,485 feet) at a road junction and hiked the final 0.2 miles up the steeper, rockier section of road to the cattle gate.

You cannot see Little Butte from the Tower Road or the cattle gate because your view is blocked by the higher butte that the communications towers are on. You might even think that THIS is Little Butte but, alas, it is not. It is an unnamed point (Point 5588) that is actually HIGHER than Little Butte! This climb is entirely off-trail so have a USGS topo map to find your way to Little Butte.

Climb over the cattle gate (the road continues up to the highest communication towers from the gate) and leave the road before it reaches the highest tower on Point 5588. Skirt the left/northeast side of Point 5588 in thick sagebrush. You will soon see Little Butte across a wide sagebrush gully and just over a mile away. Aim southeast directly at the butte and drop to a dry gully crossing with lots of cattle paths (and probably live cattle) in this low-lying area.

The combination of gaps and cattle trails in the sagebrush make this area reasonably fast, though some degree of weaving is required in spots, especially as you ascend toward the summit of Little Butte. Thankfully, the high point is on the west side of the butte so you reach it immediately from this side of the butte. The summit of Little Butte is surprisingly rocky and there is a gully/crater between the west summit (5,533 feet) and the [lower] east summit (Point 5399).

There is no cairn atop Little Butte and no loose rocks with which to build one. Cattle were even grazing in the crater! There is an old 2-track jeep road (not shown on maps) coming up into the crater from the north. Return the way you came, using cattle trails as much as possible to expedite your return to the communications towers and Tower Road. 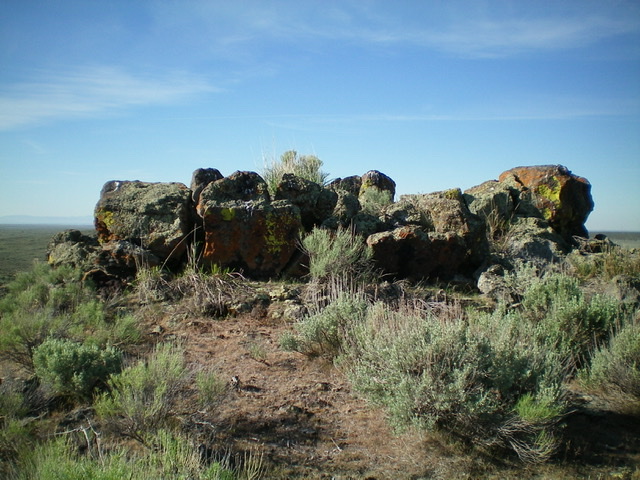 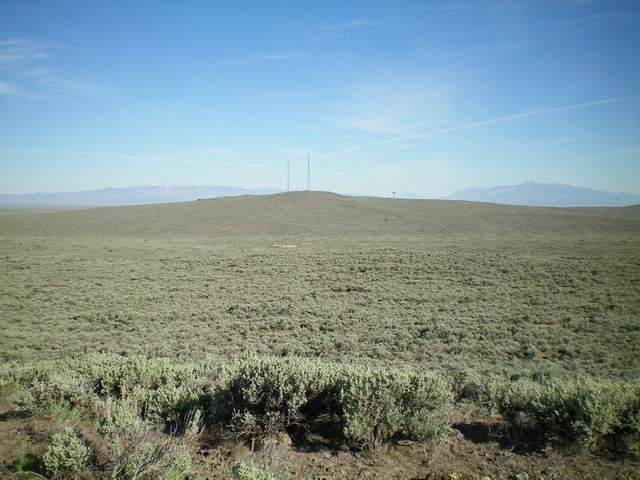 Looking northwest from the summit of Little Butte at the communication towers where the hike begins. Ruh roh! That’s a lot of sagebrush! Livingston Douglas Photo