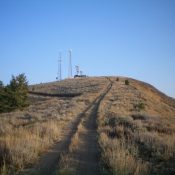 Lower Black Benchmark is the south summit of Black Mountain. I suspect that many of the folks driving along US-89 to the east probably regard this antenna-clad summit as the high point on Black Mountain, but it is not. The true summit lies about 0.8 miles farther north and is only 69 feet higher (only 35 feet higher according to my altimeter). Lower Black Benchmark is most easily reached via FSR-004 which comes up the south ridge from Deep Creek Road/FSR-070. USGS Tincup Mountain 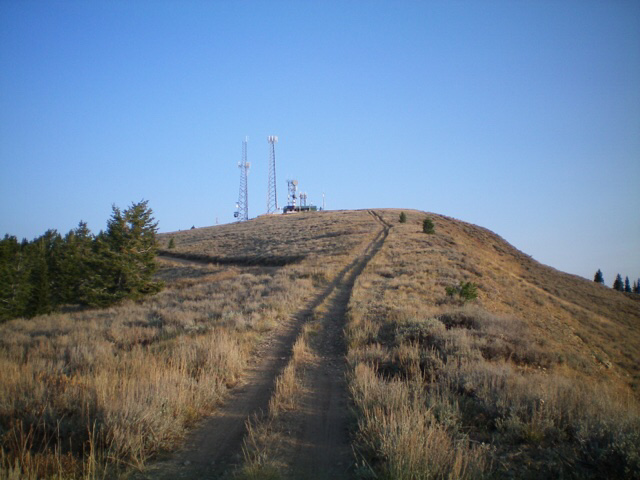 The antenna-clad summit of Lower Black Benchmark as viewed from the 2-track road on its south ridge. Livingston Douglas Photo

From the junction of US-89 and Greys River Road in Alpine, WY (Alpine Market and Family Dollar are nearby), drive south on US-89 for 9.1 miles to [signed] Creamery Road/CR-111. Turn right/west onto CR-111 and drive 3.5 miles to an unsigned junction. Turn right/north onto Deep Creek Road/FSR-070 and drive 4.5 miles to the end of the road. Park here (7,280 feet). Please note that the USGS topo map does not show FSR-070 going this far up Deep Creek but it does.

From the end of FSR-070, there is a signed foot trail that continues north-northwest, following the east side of Deep Creek on an old 2-track jeep road. Neither the Caribou-Targhee National Forest Map nor the USGS topo map show this trail/old road, but it is useful for hiking. Hike up the foot trail for about 0.4 miles to reach a prominent dry gully on the right/east side of the trail/road. Leave the trail here and climb the shoulder on the left/north side of the gully. The gully soon bends north.

Cross the gully and bushwhack northeast then east to reach the summit ridge of Black Mountain. The terrain is not a simple face climb. It is a mix of minor dry gullies and minor shoulders. Try to stay mostly in steep, open grass/brush/sage slopes to intersect FSR-004 up near the ridge crest. Follow FSR-004 briefly northwest then leave it to bushwhack right/east up onto the nearby ridge crest through some thick brush and sagebrush.

The ridge crest of Black Mountain has an old 2-track jeep road on it (not shown on any maps). Hike north-northwest up the old road to quickly reach the summit of Lower Black Benchmark. The summit has multiple antenna installations and lots of concrete platforms, as well as FSR-004 leading up to the installations from the west side of the ridge. FSR-004 ends here. I could not locate the USGS benchmark. 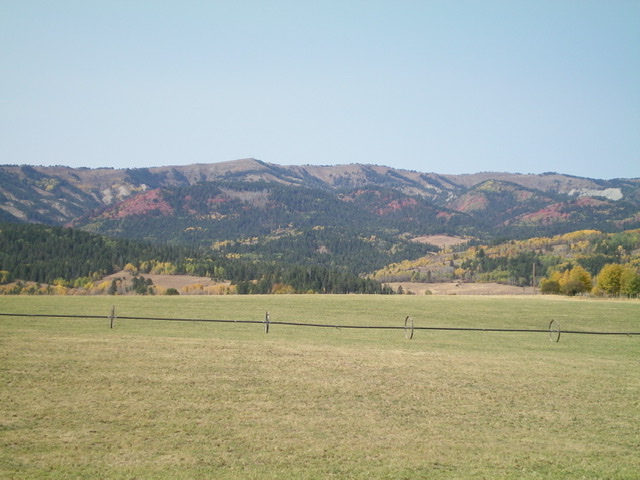 Black Mountain as viewed from US-89 to its east. Lower Black Benchmark is the antenna-clad hump left of center. Sure looks like the high point of Black Mountain, doesn’t it? But, alas, it is not. Livingston Douglas Photo 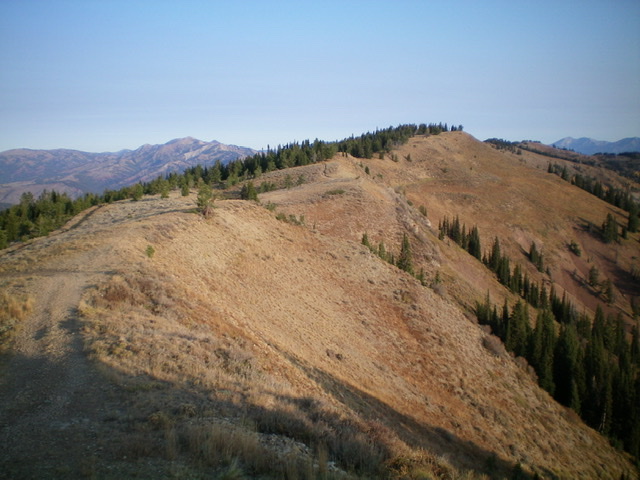 Looking north along the summit ridge of Black Mountain from Lower Black Benchmark. The middle/true summit is right of center. Livingston Douglas Photo 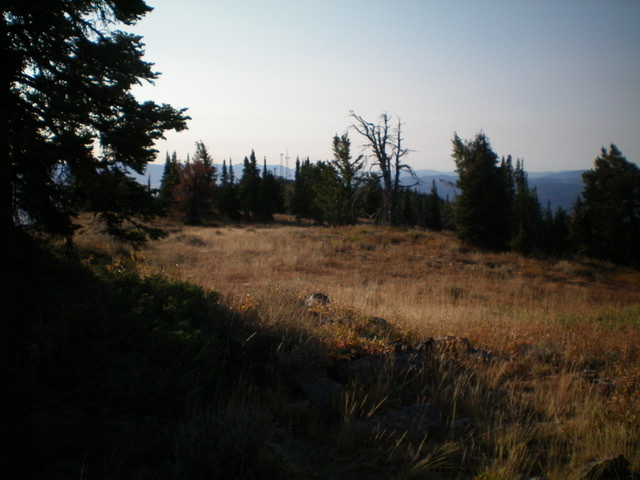 My descent route varied a bit from my ascent route. From the summit of Lower Black Benchmark, follow the 2-track jeep road south along the ridge crest for about ½ mile down to a flatter ridge section just prior to reaching a prominent gully on the right/west side of the ridge. Leave the road/ridge here and descend southwest down open terrain on the southwest face.

Enter the forest and bushwhack down to a prominent dry gully that drops steeply left-ish/south. Descend the gully (some loose, steep dirt/scree sections) south then southwest. As you near Deep Creek Road, contour right/west to return to the top of Deep Creek Road and your parked vehicle. This bushwhack route was a bit easier than my ascent route. The descent gully shows up on the USGS topo map.