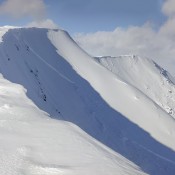 Climbing and access information for this peak is on Page 311 of the book. Livingston Douglas provided the new route updates set out below. Updated December 2019

Mount Hoopes is located just south of Tyler Peak. Although it is one of the most impressive of the southern Lemhi Range peaks, Mount Hoopes is seldom climbed. In December 2015, Larry Prescott and Jeremy Smith made a bold traverse of the peak using a vehicle approach up the North Creek Road and then a snowshoe approach via Camp Creek. Their 2015 ascent was the first known winter ascent of Mount Hoopes. They climbed the peak from Camp Creek on the west side of the Lemhi Range Crest and then joined Rick Baugher’s route (set out in the book) by climbing the peak’s south ridge to the summit. Rick and Larry’s trip reports are linked below. USGS Tyler Peak 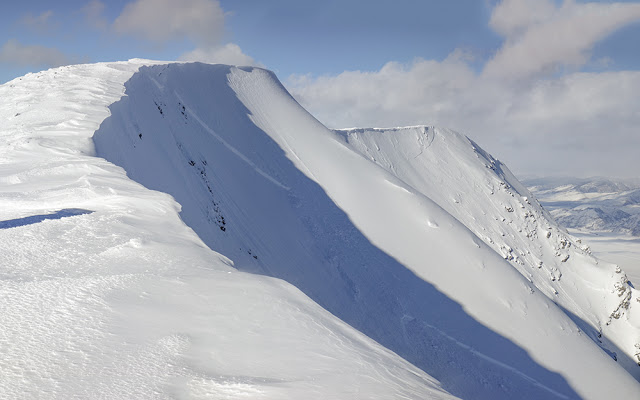 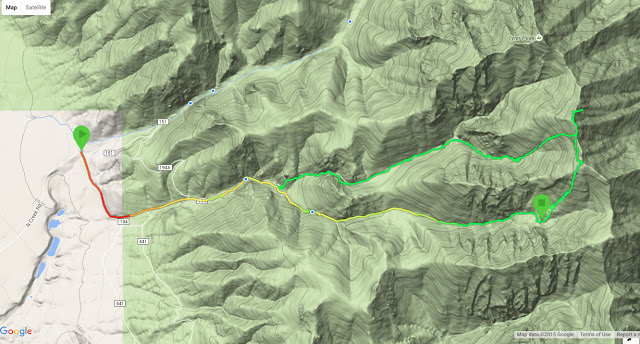 North Creek Road is located 12.6 miles north of Howe on the [paved] Little Lost River Highway. Turn right/east onto [signed] North Creek Road. Drive 5.5 miles on North Creek Road to an unsigned dirt road on the right/south side of the road. Park here (6,495 feet). The road ends at a private ranch 0.1 miles farther up. The small, unmarked parking area is on BLM land and is at the junction of two ATV trails next to North Creek. Neither trail is signed.

From the parking area next to North Creek Road, follow an unsigned ATV road south-southeast across North Creek (either ford it or jump it) to reach the Camp Creek drainage. The ATV road turns left/east and heads a short distance up Camp Creek and into the Challis National Forest, quickly reaching a signed junction. FSR-194 heads up Camp Creek, but this road is gone so there is only a sign for “Camp Cr”. Sadly, FSR-194 is still shown on the current Challis National Forest map, but the road has been gone for years. FSR-441 goes right/south along the base of the mountains. It still exists.

From the junction, follow the remnants of FSR-194 up Camp Creek. It is still decent for hiking. Camp Creek is a dry drainage most of the year. Contrary to the USGS topo map, the old road (or remnants thereof) is mostly on the right/south side of the dry creek bed not on the left/north side. There are no side roads feeding into the Camp Creek Road as the USGS topo map indicates.

Ignore a minor spur road that only goes a short distance to the left at about 6,800 feet. It leads to an old mine and campsite nearby. Continue following the old road along Camp Creek as the creek drainage bends right/southeast and passes a fork in the drainage. The road ends about two miles up from the road junction at the mouth of the drainage, much farther up Camp Creek than the Challis National Forest map indicates. At this point (7,675 feet), the drainage narrows considerably and passes between two steep side ridges. Follow a good elk trail along Camp Creek to a meadow at just under 8,000 feet. The drainage opens up noticeably here.

Leave the Camp Creek drainage in this meadow and follow a well-beaten elk/deer trail left/north up a hillside and over a saddle. The terrain here is open sagebrush with a forest on its left/west side. From the saddle, drop down through easy open pine forest to the west gully. This gully parallels Camp Creek and is about ½ mile north of it. Unfortunately, the west gully is not a cruise like the Camp Creek drainage. This gully is a challenging bushwhack up this dry drainage on a combination of talus/scree fields and lots of downed timber. There are no roads or game trails to help here. Wild animals are smart enough to avoid this area.

Bushwhack northeast up the west gully to a critical fork at 8,450 feet. A massive rock buttress splits the gully here. Go right/southeast here and scramble another ½ mile through more downed timber and talus fields. The gully narrows noticeably at about 9,070 feet. Snow lingers in the narrow gully above this point, making further progress difficult. That’s fine because the best access to the west ridge is directly above, and north of, the gully here. This point is just past a series of nasty cliffs that block access to the west ridge. It is also just past the upper edge of the forest. The going is steep, but do-able now. Leave the west gully and climb left/northeast up a steep scree/gravel slope to reach the west ridge of Mount Hoopes. Stay close to the edge of the forest (really only a line of scattered pines here) and use scrub to get traction on this steep, loose hillside.

Reach the west ridge at about 9,800 feet. Scramble up the [rounded] west ridge on somewhat loose talus/scree. You will make good progress here. The ridge initially climbs northwest then bends right-ish/east to push its way to the gentle scree/gravel summit of Mount Hoopes. The west ridge brings you directly to the high point of Mount Hoopes, not to one of the numerous false summit humps nearby. There was no summit cairn or signs of previous ascent. 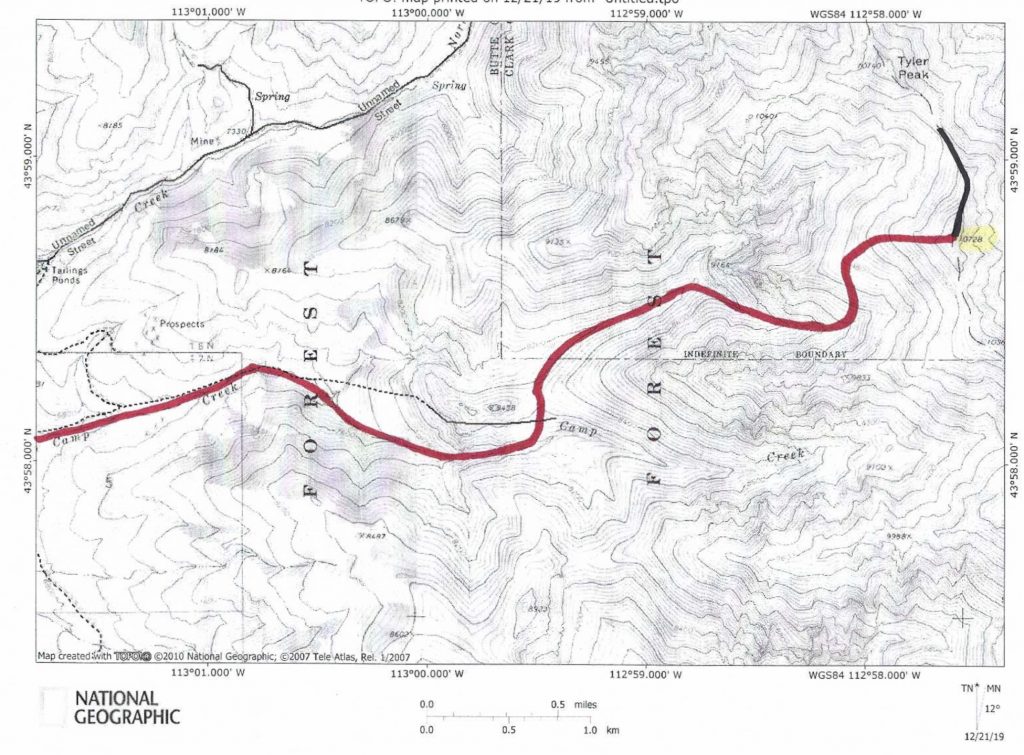 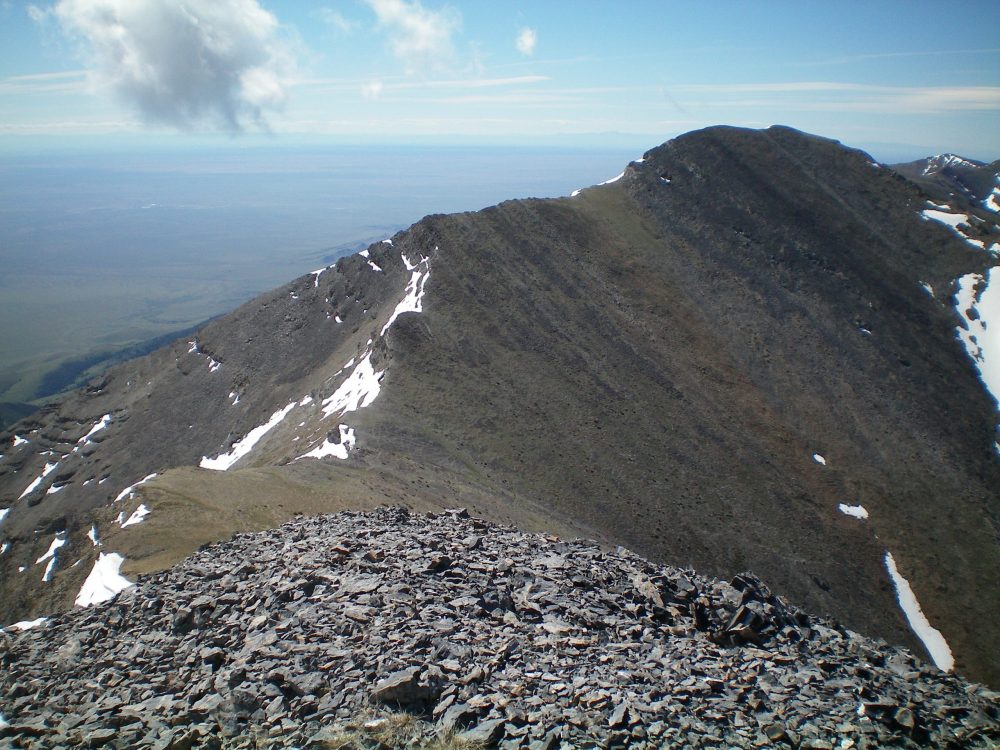 Same as for the West Gully/West Face Route. This is the first leg of a ridge traverse from Mount Hoopes to Tyler Peak.

From the summit, descend the narrow ridge crest on loose talus/scree with rocky outcrops and minor ridge breaks/cliff bands to navigate. The connecting ridge saddle with Tyler Peak is at 10,220 feet. The descent is about ½ mile in length and drops just over 500 vertical feet. Be particularly careful if there is still lingering snow near the ridge crest. A fall off this ridge crest would be catastrophic. 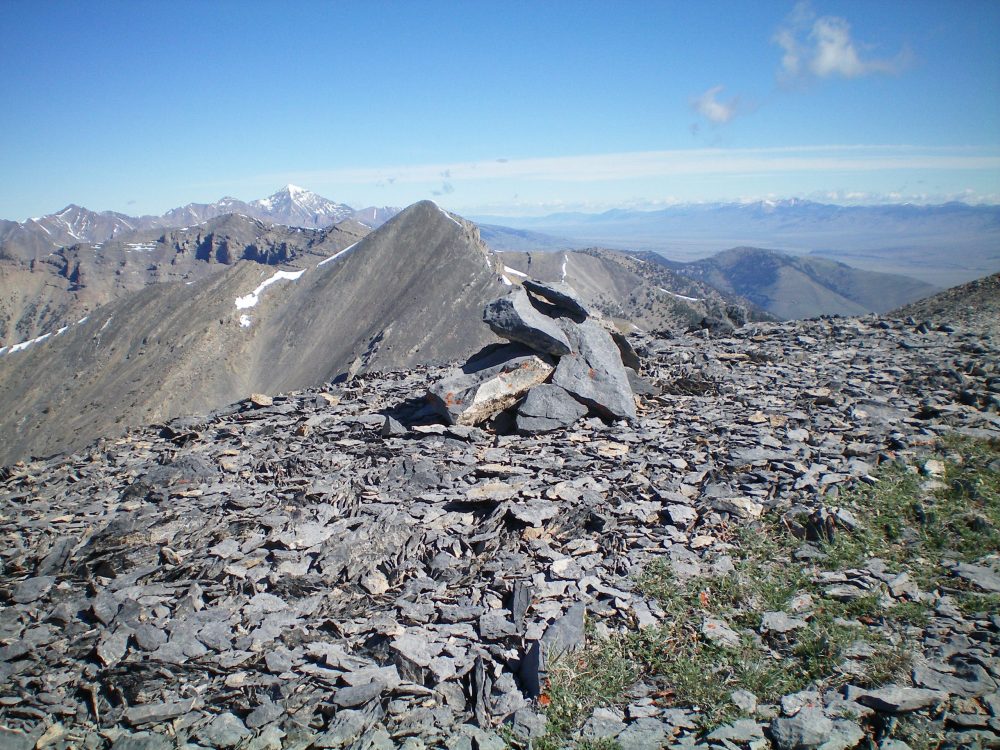 The newly-built summit cairn atop Mount Hoopes with Tyler Peak in the background. Livingston Douglas Photo 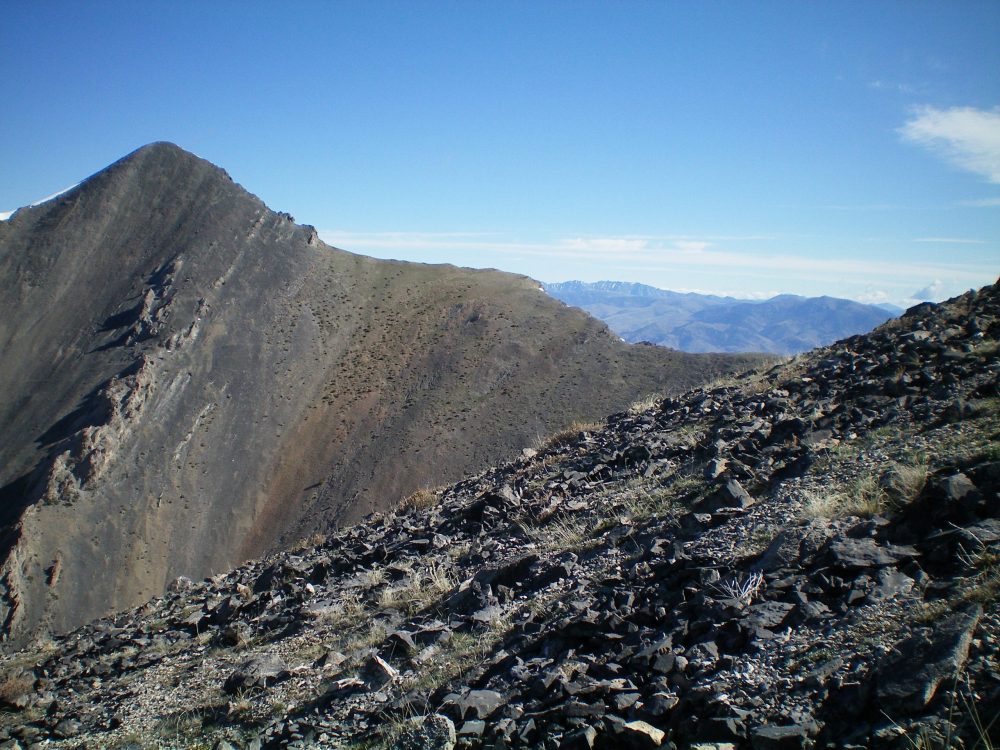 The rocky terrain of the west ridge of Mount Hoopes (foreground) with Mount Tyler and its southeast ridge in the background. Livingston Douglas Photo