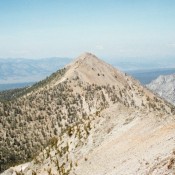 McDonald Peak sits east of the main Sawtooth Crest just southwest of Pettit Lake. It is a peak that can be climbed earlier in the Spring than most Sawtooth Peaks because its slopes melt out earlier than the peaks on the crest. It has also been climbed a number of times in Winter. USGS Snowyside Peak 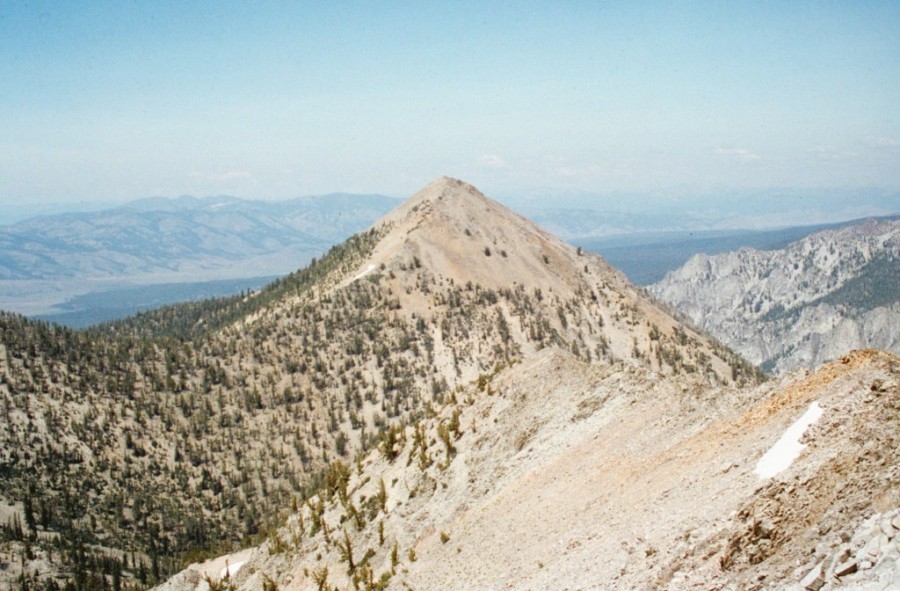 McDonald Peak as viewed from Peak 10027 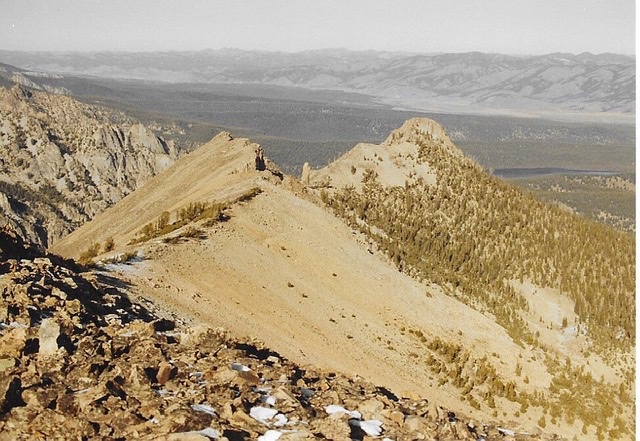 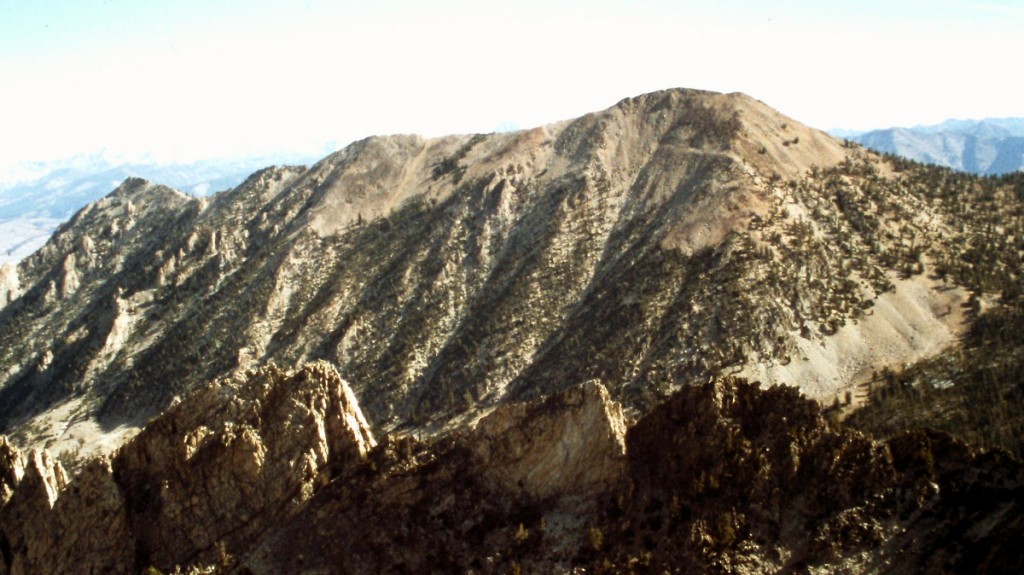 McDonald Peak as viewed from the summit of El Capitan

Approach update for [(A)(3)(b)] on Page 206: From ID-75, turn west on Cabin Creek Road (FSR-207) about 1.5 miles north of the turnoff for Alturas Lake (FSR-207 is no longer accessible from the Alturas Lake Road). In case the signs are missing: turn left/south at 1.2 miles from ID-75, right/west at about 1.8 miles farther and continue for another 0.2 miles to the Cabin Creek Trailhead. 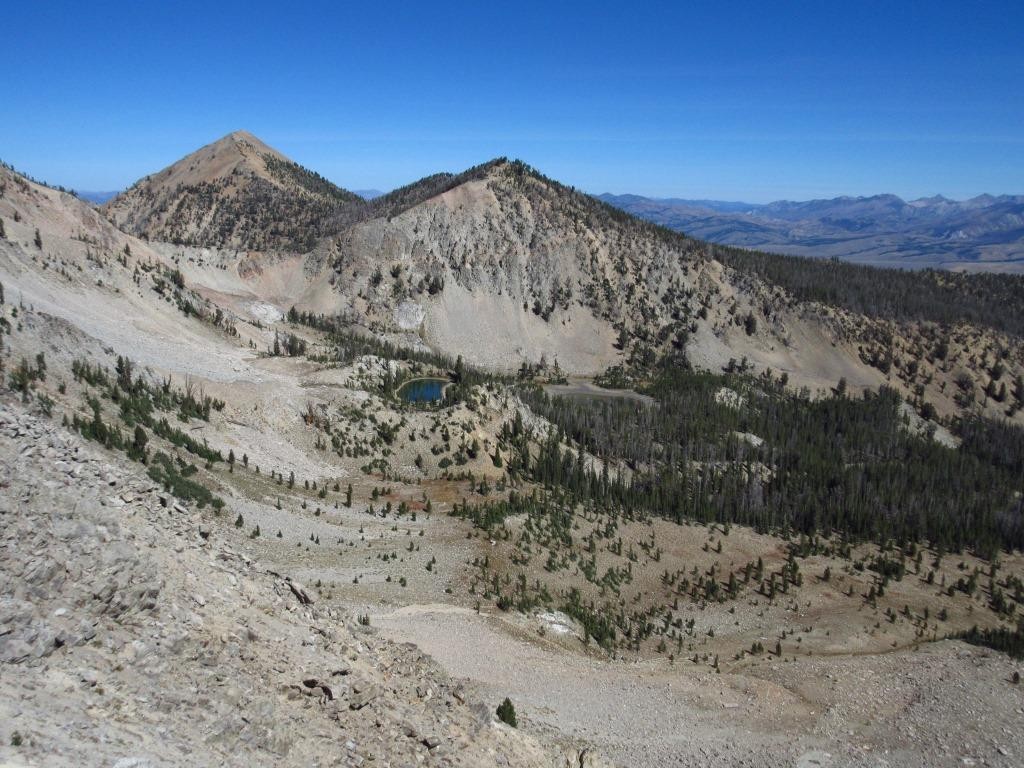 McDonald Peak is located northwest of Alturas Lake and south of Pettit Lake on the west side of ID-75 and south of Stanley in the Sawtooth Range. It is a popular peak but, surprisingly, there is no trail to the top. The easiest approach is from the Cabin Creek Trail and its east side. 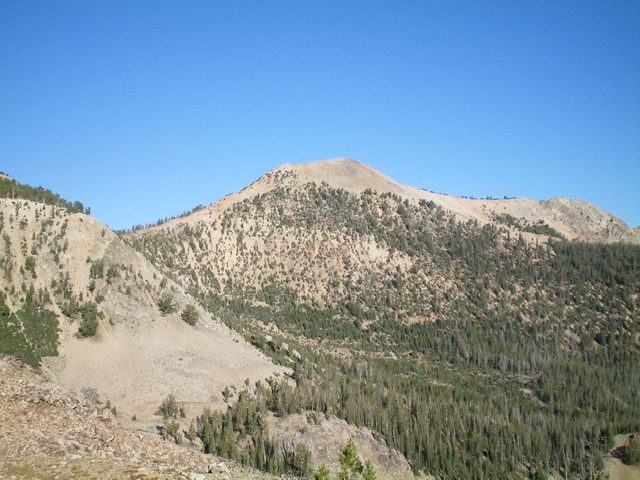 McDonald Peak as viewed from the southeast. Livingston Douglas Photo

From the large trailhead parking area, hike west up the well-beaten Cabin Creek Trail/FST-191 for about 0.4 miles to 7,325 feet. Leave the trail (just before reaching a large gully on the right/north side of the trail) and bushwhack right/north up a steep slope of thick sagebrush to reach the crest of the east ridge. There are scattered pines near the ridge crest here but the ridge itself is mostly open sagebrush and other veg initially.

Once on the ridge, head west through open scrub and soon reach pine forest. You can either bushwhack through the forest near its edge (not too bad) or stay in the open scrub and underlying loose scree/gravel on the left/south side of the ridge. Choose your poison. I chose the forest to avoid the thick scrub and required weaving around to navigate through it. The ridge soon steepens and becomes completely forested. The ridge loses its definition. Just keep climbing west and the ridge crest will reappear and open up a bit.

The slope eases and the forest bushwhack isn’t too bad. Then the ridge bends hard left/southwest at about 8,600 feet and climbs a short, steep section of loose gravel in open terrain (not fun). Thankfully, the forest soon takes over. Climb steeply to a scree hump (Point 9052). The ridge narrows and bends right/west here and is a mix of ridge pines, rocky outcrops/humps, and pure pine forest. There are several ups and downs from Point 9052 to the base of the east face of Point 9794. As you approach Point 9794 (which is at the south end of a major north-south ridgeline that has McDonald Peak at its north end), you can see a line of pine trees ascending diagonally right/north across the east face of Point 9794 at the head of a steep gully (see photo). 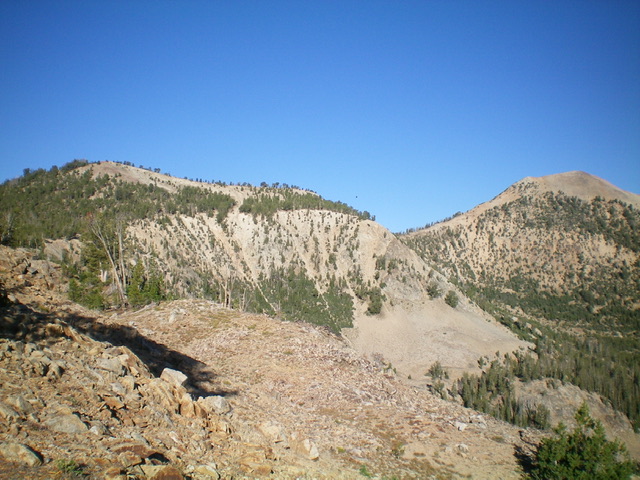 Point 9794 (left) and McDonald Peak (far right) as viewed from high on the east ridge. The diagonal upward traverse (rightward) across the northeast face of Point 9794 follows the line of pine trees in the photo. Livingston Douglas Photo

The summit had a modest cairn, so I built it up. There is a cairn, post, and survey marker on a slightly lower point to the north on the ridge. When descending the east ridge, be careful to drop right/east through the thick pine forest to find the open, lower section of the east ridge that sits directly above the Cabin Creek Trail. The ridge is ill-defined in this forested section, so it is easy to get off course and end up quite a distance from the trailhead. 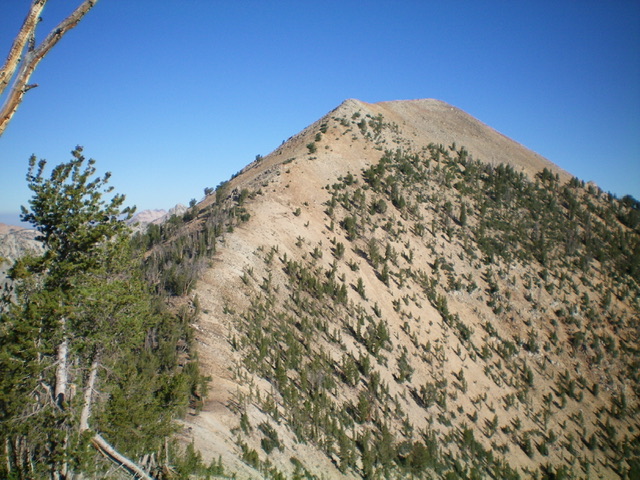 Looking up the south ridge of McDonald Peak. This was the final leg of my ascent route. Livingston Douglas Photo 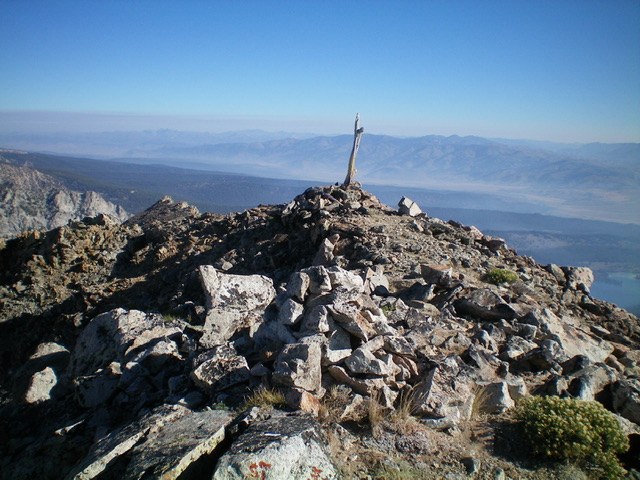