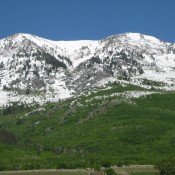 Climbing and access information for this peak is on Page 356 of the book. Matt Durrant supplied the following detailed standard route information and photo. Farther down the page is information on my ascent up the peak’s west side. Still farther down the page, Livingston Douglas provided a new route on the peak, the northeast shoulder/north ridge. The register and summit cairn are not on the highest point based on my visual inspection and the Lists of John website which shows the south summit as the highest spot on the mountain. Updated March 2021 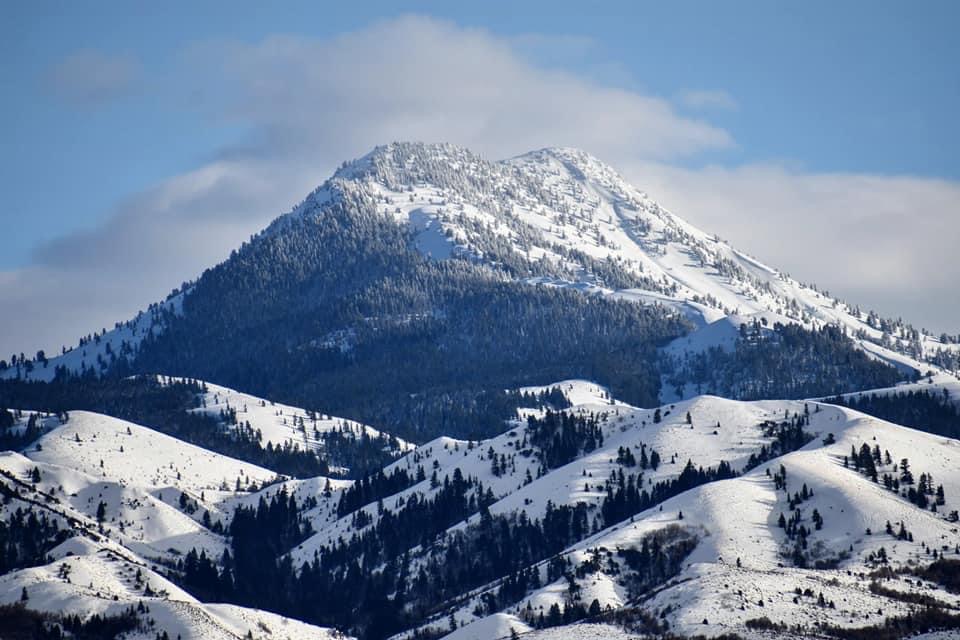 Oxford Peak (elevation 9300 feet) as viewed from the north. This commanding and highly prominent peak dramatically changes character depending on the viewer’s location.
Ancient Lake Bonneville surrounded the mountain on three sides until the lake broke through at Red Rock Pass, literally at the eastern foot of the mountain, unleashing the great Bonneville flood that carved out the Snake River Gorge. Photo and Commentary by Russ Durrant.

With 4,030 feet of prominence, Oxford Peak is one of Idaho’s most prominent mountains. In fact, it ranks as the 10th most-prominent peak in the state. Regardless of this, its elevation is not overly substantial when compared to many other Idaho peaks. Still, at 9,300 feet, it is the Bannock Range high point and the Oneida County high point. The mountain lies directly on the Oneida County/Franklin County line. 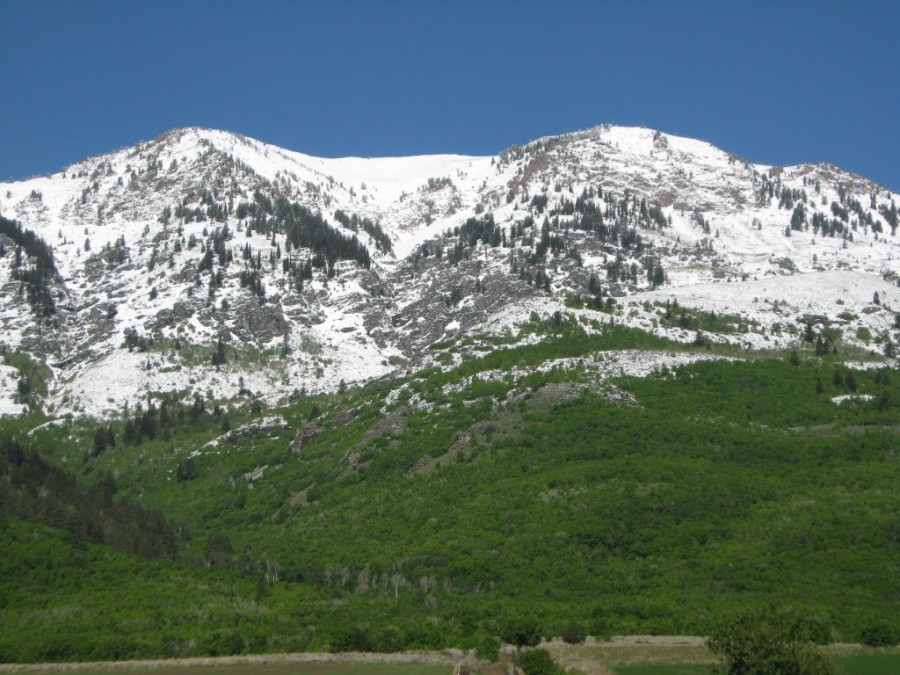 Oxford Peak as viewed from the east. Matt Durrant Photo

Because of its unique combination of prominence and county/range high point status, Oxford Peak is climbed quite often, especially when compared to other Bannock Range peaks. While there are numerous feasible routes to the top, only one is commonly used. The east and west Faces of the peak, while not technical, are very steep and brushy, and private land issue keep climbing activity to a minimum. The best route follows an ATV trail from Davis Basin to the south and along the very long Oxford Ridge. While the hiking is easy, it is a very long approach. It is also possible to climb Oxford from the north via Cherry Creek Canyon. There is no trail and it is steeper, but it is substantially shorter than the southern approach.

From Clifton, ID: Turn west on 100 South. Drive to the intersection of Cemetery Road and turn left here. Pass the cemetery and turn right onto Clifton Creek Road. Stay on this road which will become quite steep in places all the way into Davis Basin. Park in Davis Basin and follow the path along the ridge to the north that leads to the peak.

The western approach to Oxford Peak leaves I-15 at Exit 22. Proceed east from the freeway on Old US-191 past the Devils Creek Reservoir, continuing south for 8.5 miles where you will make a sharp left turn onto 5500N Road. Follow this road, making a couple of 90-degree turns in the process, toward the mountains where it enters New Canyon Creek and becomes FS-222. Continue up the canyon for roughly 4.2 miles from Old US-191 until you reach a gate. The road is open to ATVs after this point.

My GPS track shows the counter-clockwise route that Steve Mandella and I took to traverse the peak. Beware: due to thick forest and brush in the lower portions of the route, you will need good route-finding skills to find your way. Our traverse was roughly 10.0 miles with 3,850 feet of elevation gain. 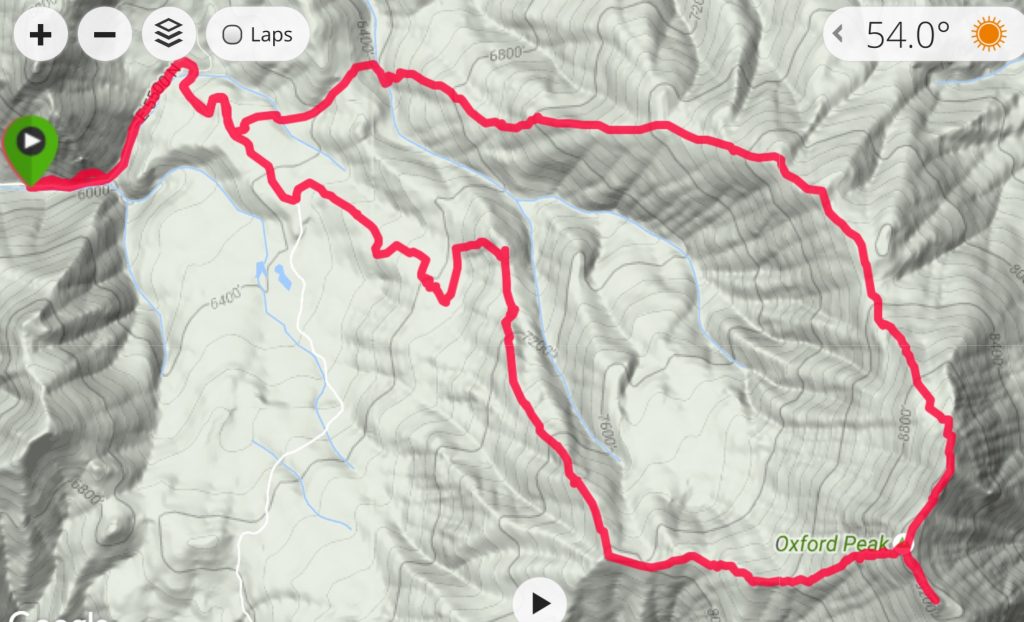 My GPS track for the traverse of Oxford Peak from the west. 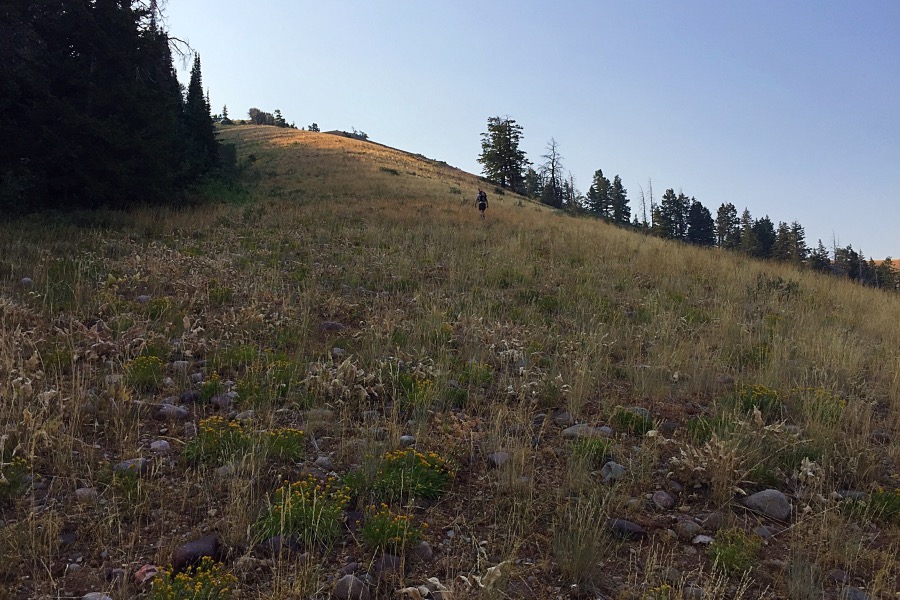 Approaching the west ridge. Once you exit the forest, the route is mostly open. 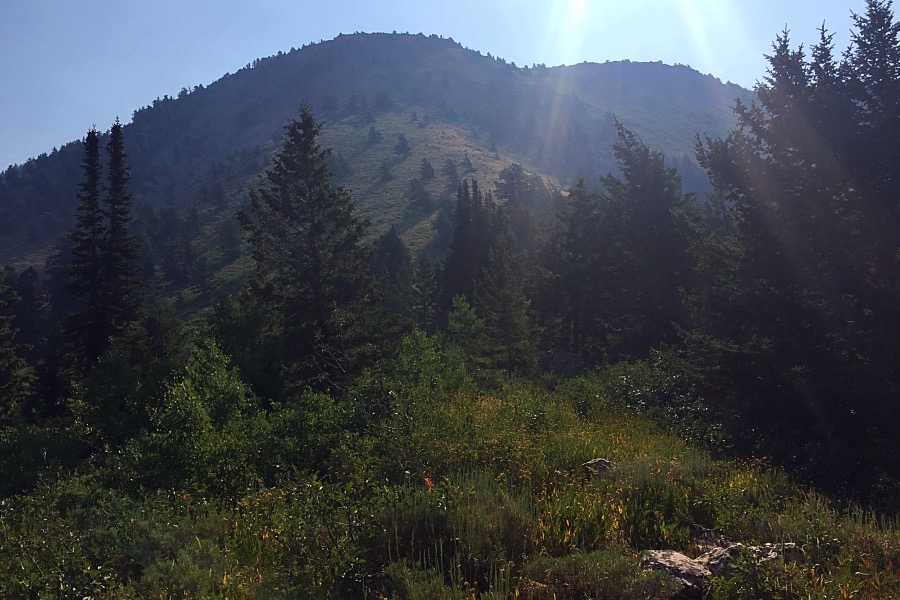 The west face is steep for the final 800 vertical feet. There are no obstacles other than brush. 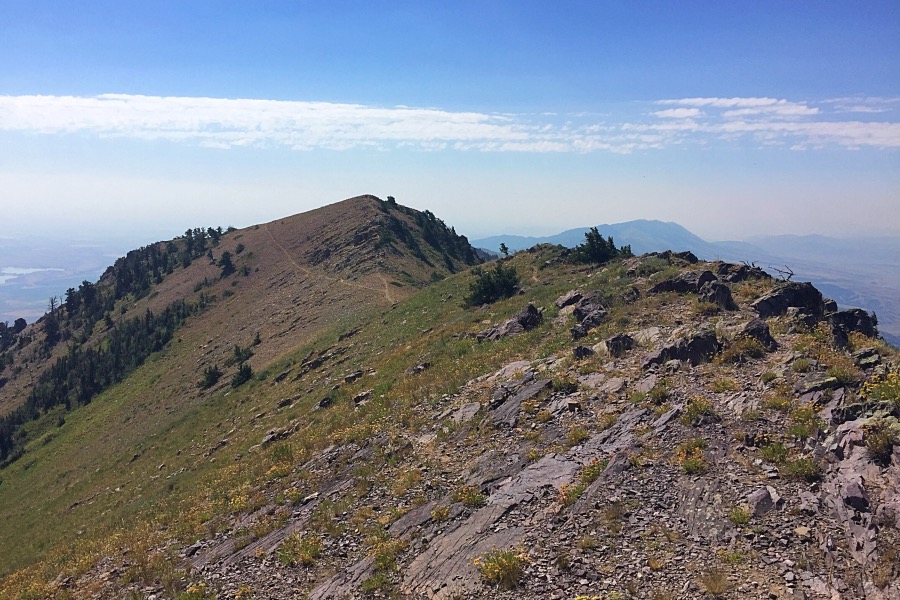 Lists of John measures this point at 9,300 feet. It is, therefore, the high point of Oxford Peak. 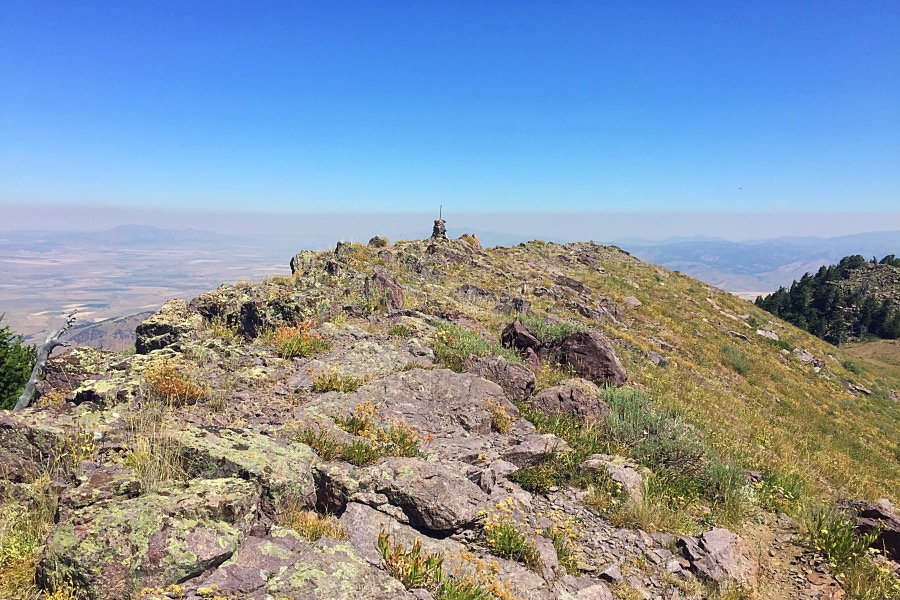 The summit cairn and register are on the North Summit (9,282 feet). 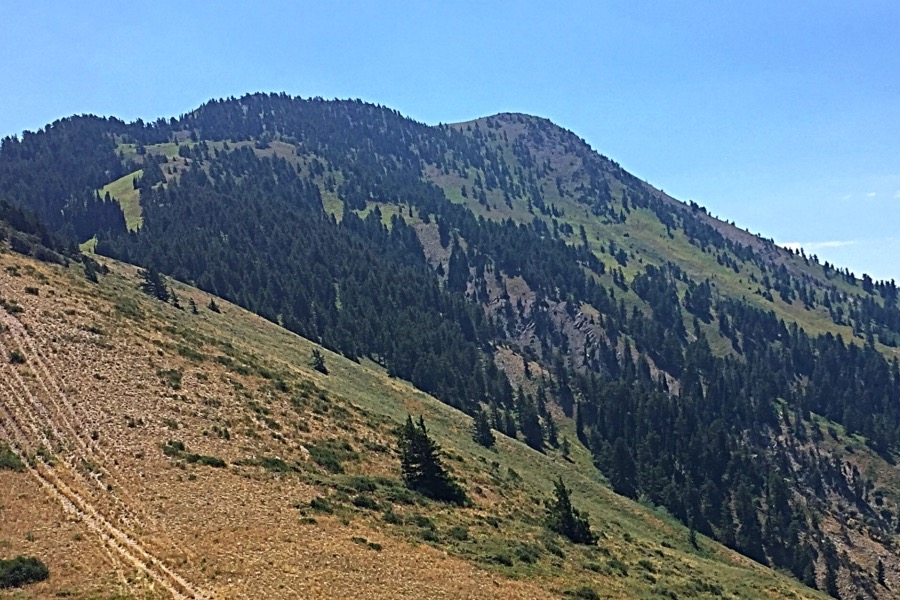 From the junction of Gibbs Road and ID-91 in the center of the metropolis of Swan Lake, turn west onto Gibbs Road. Drive 1.8 miles (crossing the diagonal, signed “Oxford Highway” at a stop sign along the way) to a sharp left/south turn in the road. The road is now called Chicken Creek Road and is signed. At 2.8 miles, the road bends right/southwest and becomes Oxford Loop Road. At 4.5 miles, turn right/west onto Oxford Creek Road (signed). At 5.1 miles, you reach a cattle gate with parking for 2-3 vehicles just before the gate. Passenger vehicles can make it to this point, but the final 0.6 miles is a bit rocky. The elevation at the cattle gate is 5,725 feet.

From the cattle gate at the top of Oxford Creek Road, hike north up the dirt road for about a mile to a cattle gate at the Caribou National Forest boundary. This is the trailhead for FST-230/Gooseberry Creek Trail (the National Forest map shows this trail as FST-414). The elevation here is about 6,350 feet. Hike up FST-230 (an ATV/MC trail) for about a mile to a “T” trail junction with FST-419 (an ATV/MC trail). This signed junction is where FST-230 ends. The elevation here is about 7,150 feet.

At the junction, go left/west (it soon turns left/south after that) onto FST-419 and follow it southward for just over a mile to reach the northeast shoulder of Oxford Peak. On the way, FST-419 has some ups and downs as it crosses two drainages and two shoulders. The elevation at the trail crossing of the shoulder is 7,640 feet. This crossing is just southwest of Point 7535 and is in open terrain with a large pullout area and ample signs of cattle activity.

Once you reach the north ridge at the base of the [obvious] section of ridge rock, the ridge is much better defined. You still have over ½ mile and about 500 vertical feet to climb. Skirt the right/west side of the ridge rock either via open grass/scrub just below the forest or via a crude trail just below the ridge crest. Once past the section of ridge rock, climb onto the ridge crest and follow a decent trail on the crest that leads up to the rocky false summit (mostly boulders). Scramble up over this point and drop 60 vertical feet (on boulders) to a gentle saddle located just northeast of the summit of Oxford Peak. Do not be tempted to skirt the false summit, as the sides are a wicked combination of boulders + forest/blowdown and/or boulders + thick veg, not to mention the side-hilling required.

Follow a use trail on the left/east side of the ridge crest (particularly if it is a windy day) until you are underneath the large cairn and large American flag on the north summit. Scramble up to the top. The views from the top are spectacular. The dramatic drop-off on the east side of the mountain might just give you a nosebleed. The valley floor seems like it is miles below you.