Peak 10104 is a gentle hill due west of rugged Peak 11598/The Riddler. The easiest ascent route is the east ridge via the 9,780-foot connecting saddle with The Riddler. There is no road or trail to that saddle. This is a pretty remote area, no matter how you approach it. USGS Diamond Peak 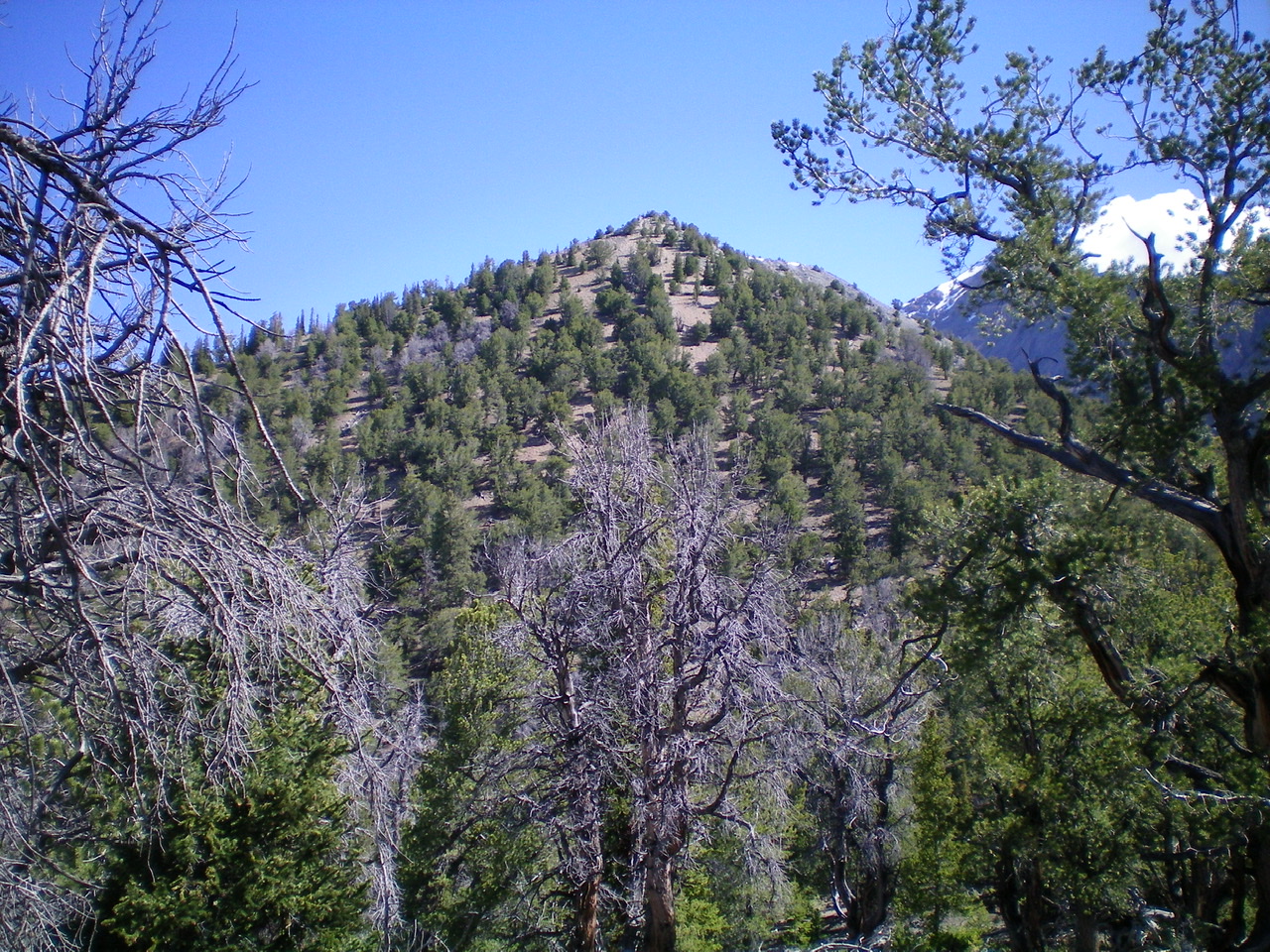 The summit hump of Peak 10104 as viewed from high on the south ridge. Livingston Douglas Photo

Badger Creek Road [(C)(10) on Page 318]. This [signed] road is located 23.3 miles north of Howe on the Little Lost River Highway (paved). Turn right/east onto Badger Creek Road. After crossing a cattle guard, make an immediate right/east turn BEFORE reaching a nearby gravel pit. At 4.5 miles, you reach the mouth of Badger Creek Canyon and a small grassy meadow and a parking/camping area. Park here (6,750 feet). The road is narrow and overgrown after this point. If you have the appropriate vehicle, you may be able to drive as far as a junction in a meadow at Bunting Canyon.

From the mouth of Badger Creek Canyon, hike up Badger Creek Road/Trail for 1-1/2 miles to a signed junction with Bunting Canyon Trail (FST-4340) just upstream from a major fork in the valley. Go straight/east on FST-4340 and follow the old road up Bunting Canyon until the road ends at about 7,550 feet. Follow a good use trail from here for 0.1 miles as it drops to cross a dry gulch. Immediately after this crossing, leave the trail. You have reached the toe of the southwest spur of the south ridge of Peak 10104.

After passing through a short section of easy pine forest, the terrain becomes brutal. For the next 50 minutes or so (and 800-900 vertical feet of climbing), the steep, narrow ridge crest is jammed with dense mountain mahogany. The sides of the ridge are no better. Higher up, blowdown replaces some of the mountain mahogany and the going gets a little easier. Side-hilling in open gravel areas here may seem appealing, but it’s a bad alternative. Just when you are about to give up hope, the ridge terrain suddenly changes to easy, open pine forest and a wider ridge crest. The ridge bends left-ish/north here.

Scramble north up over Point 9409 and one more ridge point beyond it. Drop slightly to a minor saddle which sits at the base of the final hillside, which is the avenue to the summit. Climb up this forested hillside in semi-open forest. You will spend most of your time on easy, open scrub/gravel. The summit area is small and rocky. It has evidence of surveyors (triangulation wires) and a nice cairn with a tree branch in it. The views of The Riddler and Diamond Peak are stunning. Bring your camera. 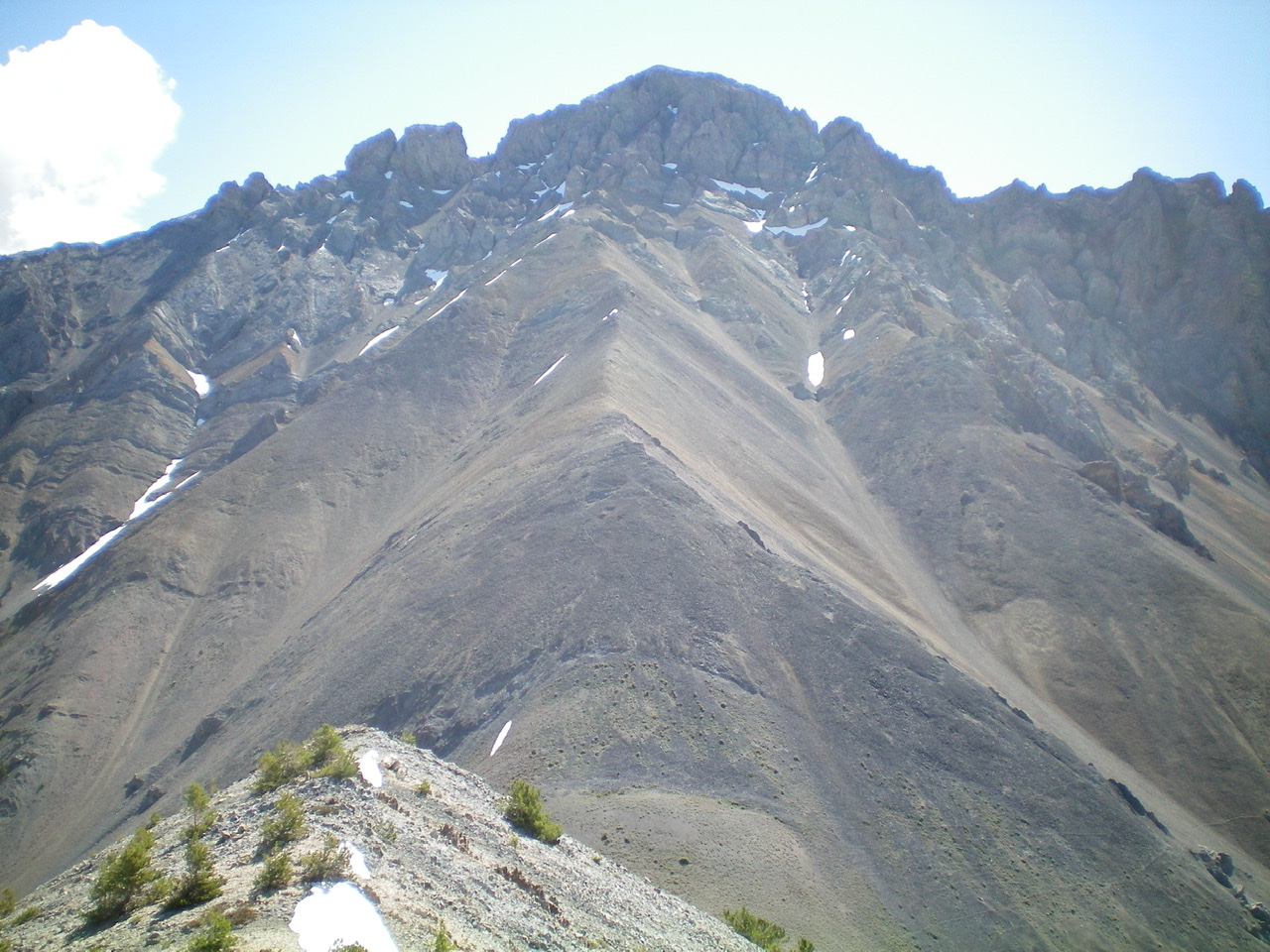 The Riddler as viewed from the summit of Peak 10104. Livingston Douglas Photo 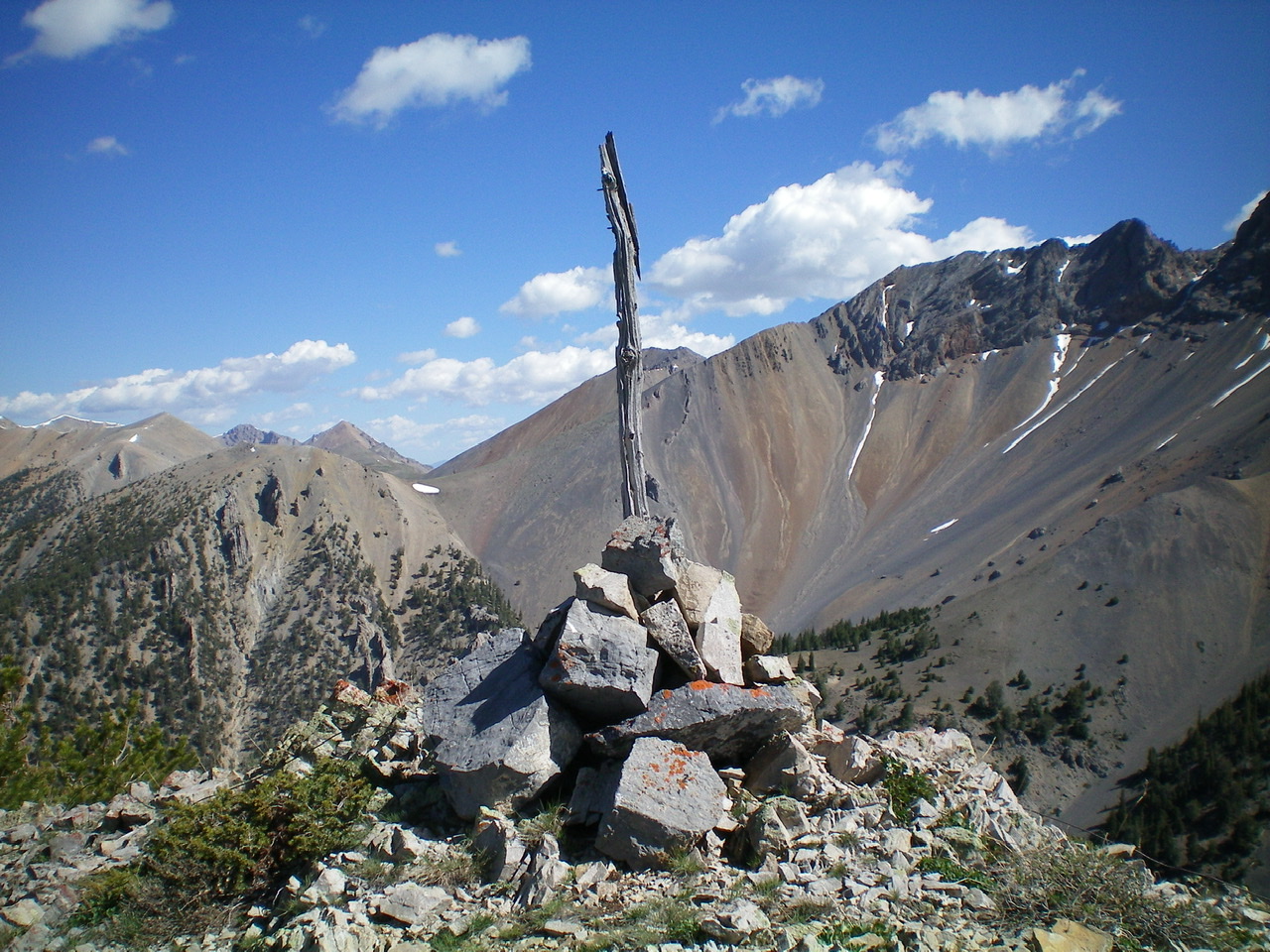 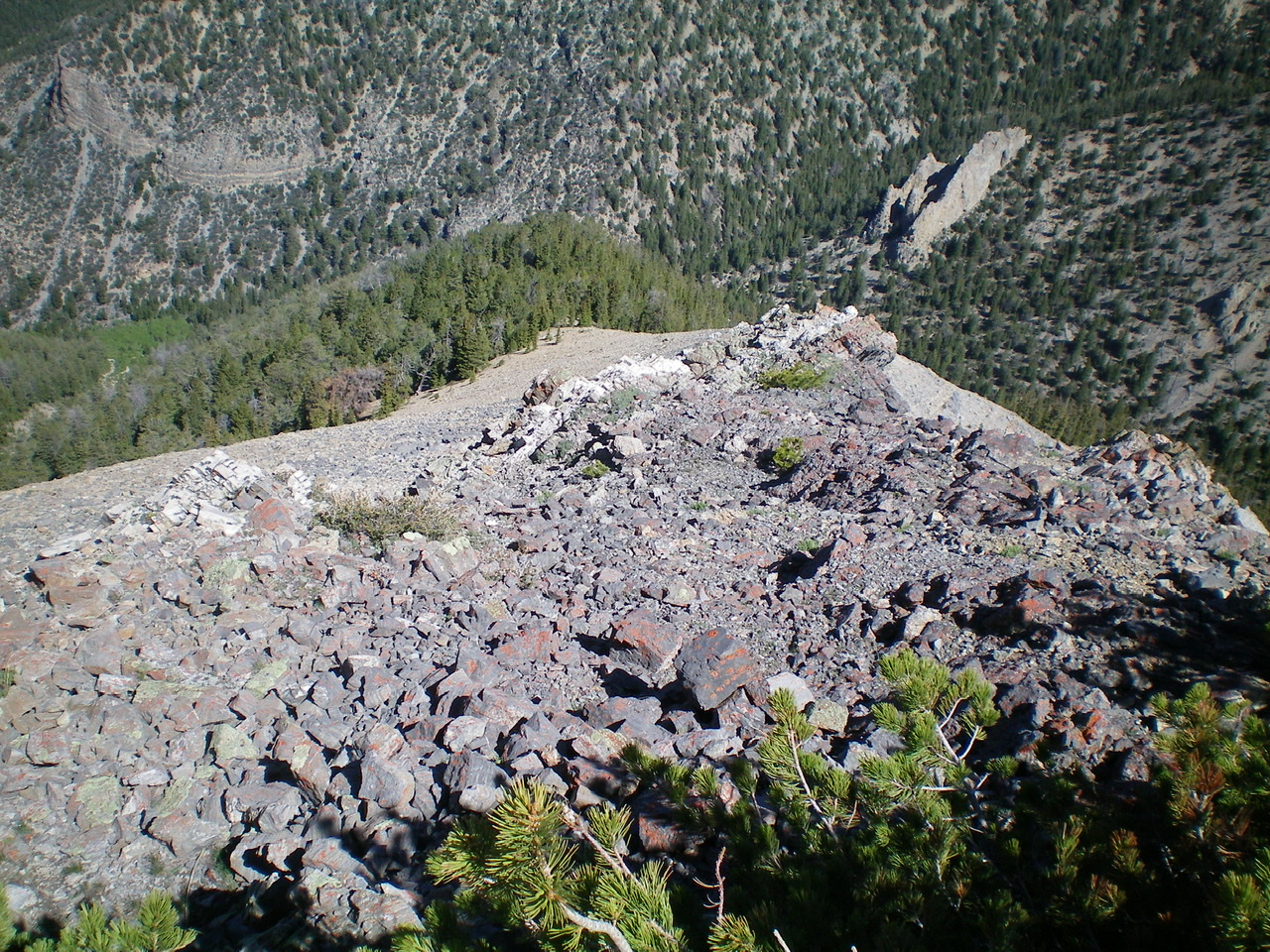 Looking down the steep northwest ridge of Peak 10104 from the summit. Livingston Douglas Photo

Same as for the southwest spur/south ridge

From the summit, descend the open, loose talus and rocky outcrops of the upper section of the northwest ridge. Once you reach the pine forest below, the going is easier. Well, at least, initially. Descend through easy open pine forest. Unfortunately, the forest soon becomes dense and is clogged with copious amounts of blowdown. As you approach the valley floor, the combination of loose gravel and blowdown make for a somewhat hazardous descent to a side gully (the “east gully”) that feeds into Badger Creek Canyon. After a final section of scrub and shale, you reach the east gully and the terminus of the northwest ridge.

The east gully is only about ¾ mile long, but it is a difficult bushwhack through sections of thick aspens, rock (talus/boulders), thick brush, and blowdown. There are no trails, human or animal, to help here. When you approach the west end of the east gully, you will find an old footpath (then road). Unfortunately, it disappears as quickly as it appeared.

Follow the base of a talus/scree slope on the right/north side of the gully to avoid the worst of the brush/blowdown and continue to make your way toward Badger Creek. When you near the creek, you will find the old, overgrown, rutted Badger Creek Road. Hike south down the old road (or remnants of it) for 1-1/2 miles to reach the junction with Bunting Canyon Trail. Continue another 1-1/2 miles down Badger Creek Road to the mouth of the canyon and your parked vehicle.