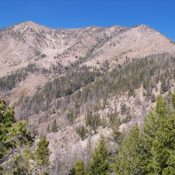 Cold Creek Peak is located just west of Peak 10263 (Paramor Peak) on the main Lemhi Range Crest where it makes a 90-degree turn to the east. Michael Darcy climbed this peak in 2012 via its southwest ridge. His climb was possibly the first ascent of this peak. He was followed by Rick Baugher roughly a month later.

Livingston Douglas climbed the peak in 2019 and provides a detailed description of the Darcy Route. Although Darcy called his route the west ridge route, Livingston points out: “I would bet that what Darcy called the ‘west ridge’ is what I call the ‘southwest ridge.’ There is no ‘west ridge’ proper on Peak 10310 but there is a ridge heading south then curving west to return you to the Tater Creek area. And that ridge is the ‘southwest ridge’.” USGS May Mountain 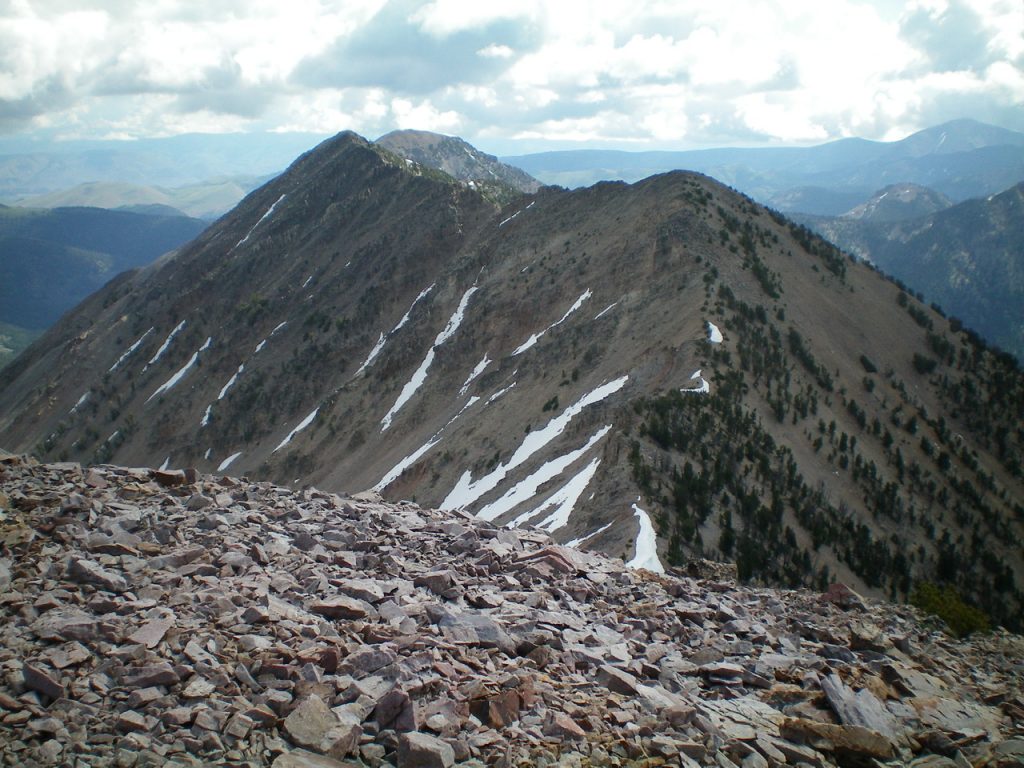 Peak 10310 is a ranked summit on the high ridge that follows the west side of Morse Creek Canyon. The shortest ascent route is either via Tater Creek or via Morgan Creek Road. In either case, you must climb over Peak 10349 and do a ridge traverse to reach Peak 10310.

Morse Creek Road/FSR-094 is located exactly 10.2 miles south of US-93 on the [paved] Pahsimeroi Highway. From the signed turnoff on the east side of the highway, drive 4.3 miles to the Challis National Forest boundary. At 6.2 miles, park in a pullout on the right/east side of the road (6,220 feet). FST-071 (signed) is across the road.

This climb is part of a ridge traverse from Peak 10349 to Peak 10310. From the 9,860-foot connecting saddle, climb about 300 vertical feet on the rocky ridge to the top of Point 10245. This ridge section is Class 2. However, the traverse from Point 10245 to Peak 10310 is more problematic. It requires a drop of just under 150 vertical feet to a narrow saddle and much more rocky outcrops, aretes and gullies on the sides of the ridge crest, loose talus/scree, and some boulders. The ridge is narrow and has areas of exposure. Be careful here.

The view from the top of Point 10245 is an ugly one. However, the ridge traverse goes better than you would think. And it’s only ½ mile long. Skirt any ridge problems on the right/east side. The traverse goes at Class 2+ if you work it carefully. All of that being said, this is a tedious traverse and you must cross numerous aretes on the way. The summit of Peak 10310 had a modest cairn so I built it up. 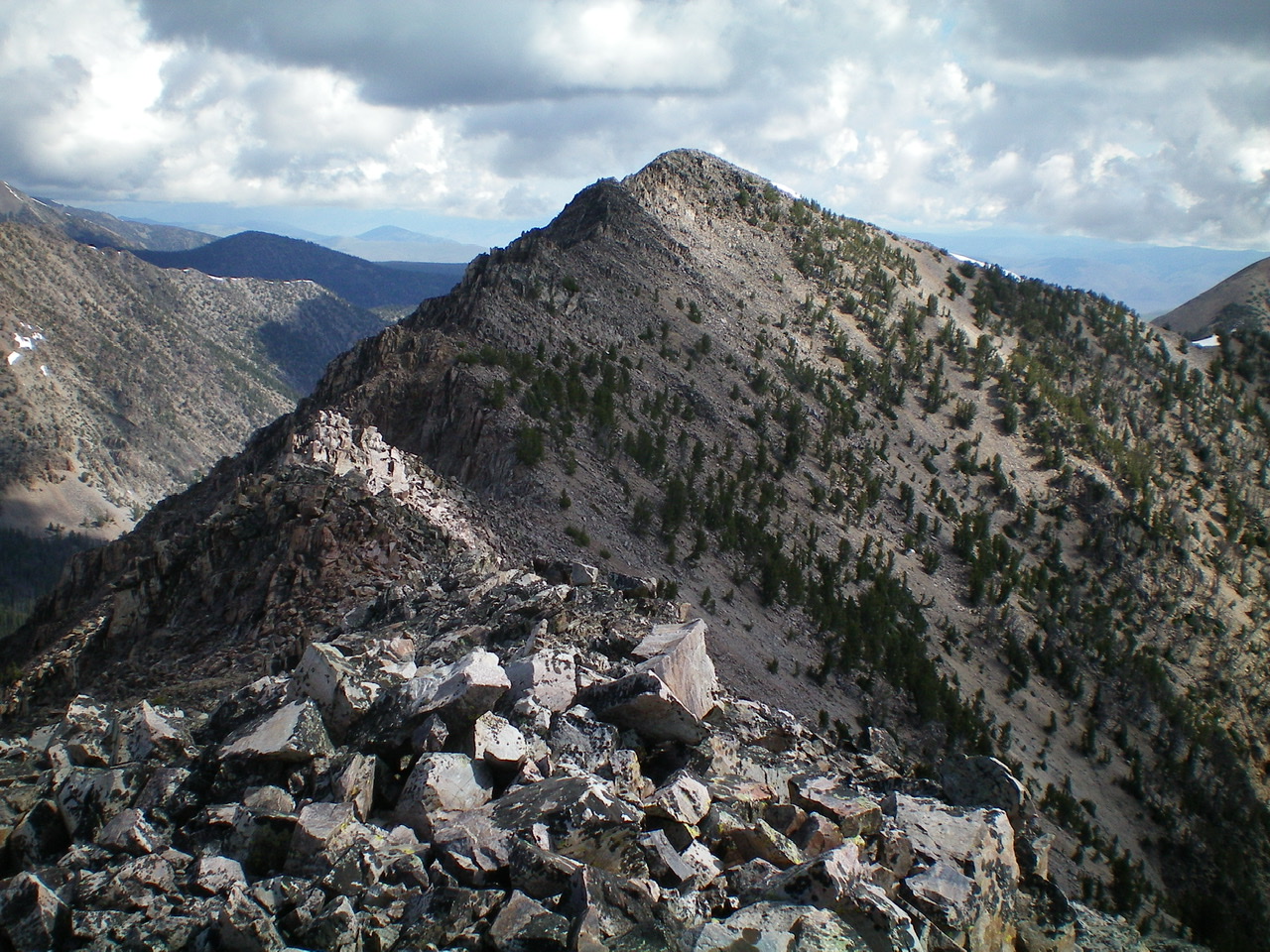 The rugged southwest ridge of Peak 10310 as viewed from Point 10245. It looks worse than it really is. Livingston Douglas Photo 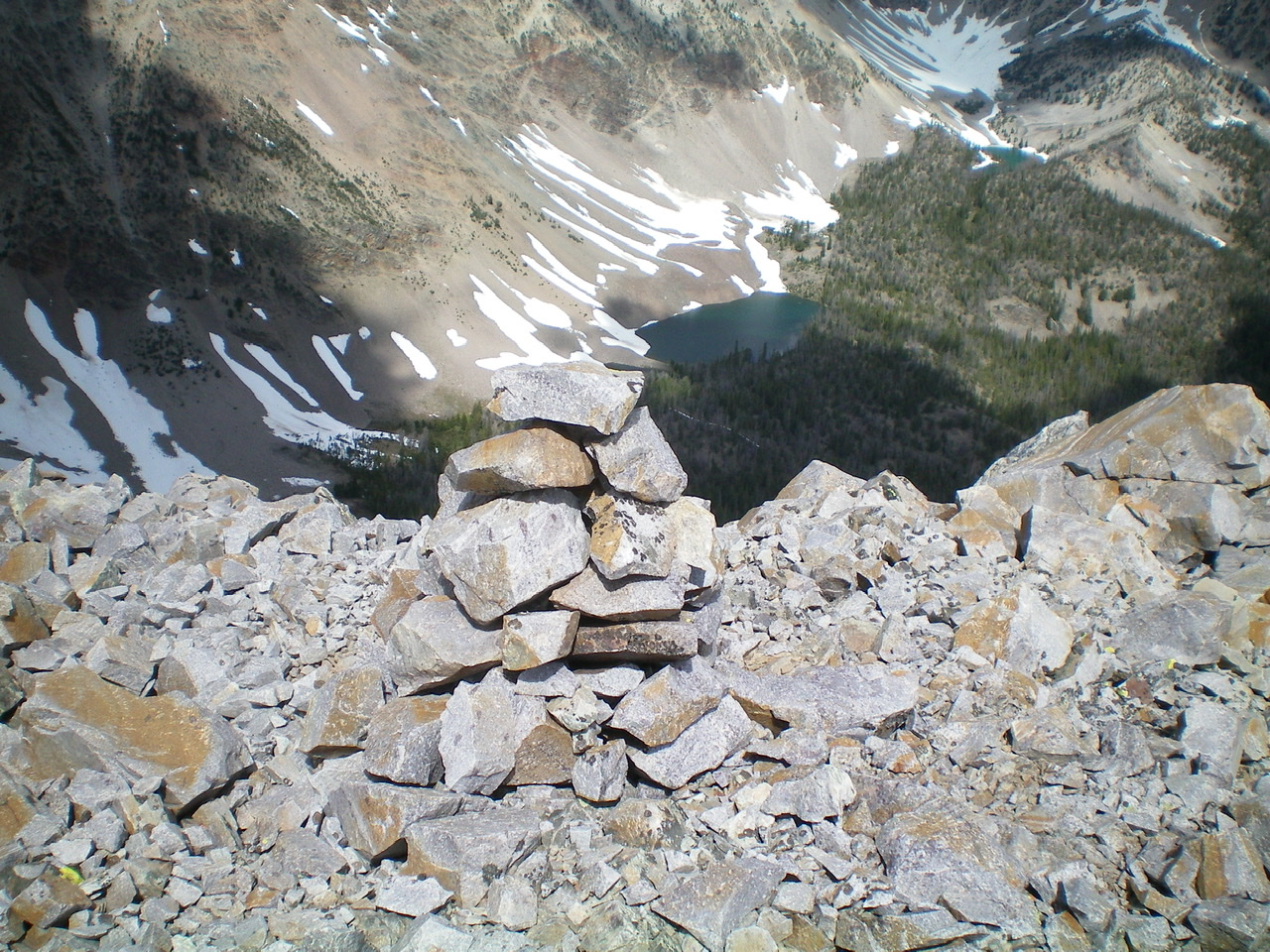 The summit cairn atop Peak 10310 with a beautiful high mountain lake to its northwest. Livingston Douglas Photo 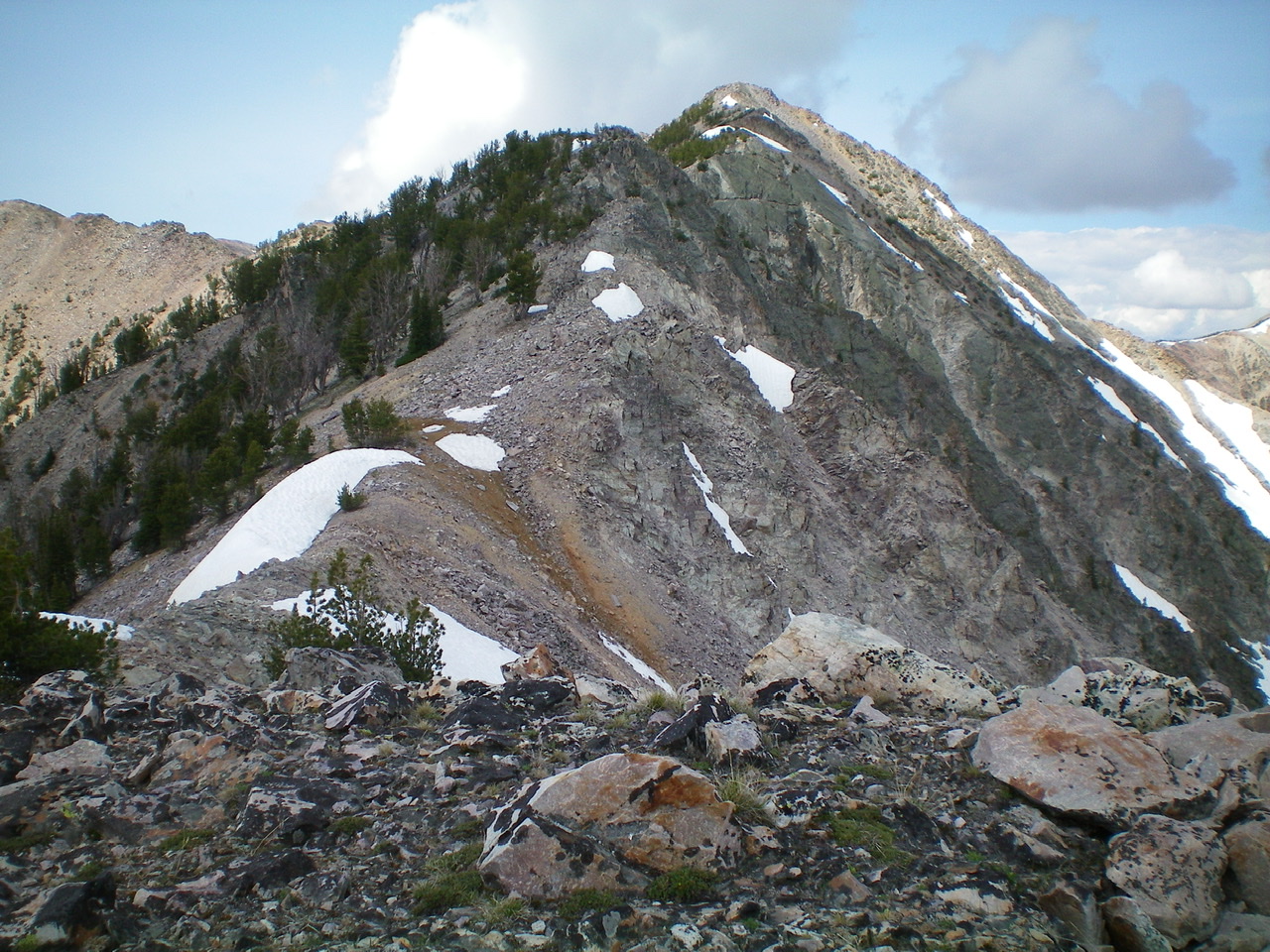 The east ridge of Peak 10310 as viewed from Point 9997. It is much easier than it looks. Livingston Douglas Photo 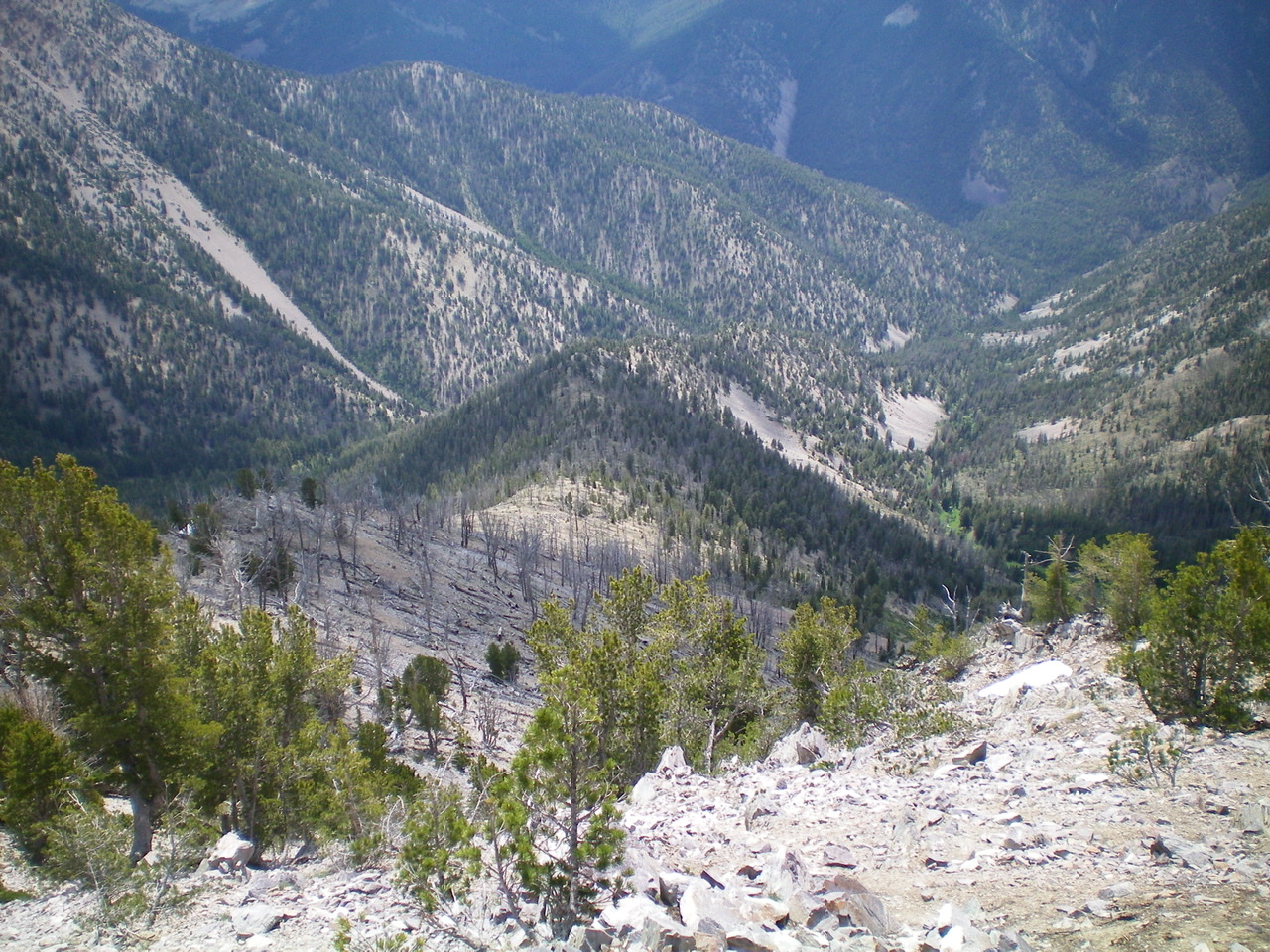 The Cold Shoulder (dead-center, foreground) of Peak 10310 as it works its way down to the convergence of Cold Creek and Morse Creek (right of center). The bushwhack along Cold Creek is brutal. Livingston Douglas Photo

Same as for the southwest ridge. This is the final leg of a loop route that begins and ends on Morse Creek Road.

From the summit, descend east on the narrow ridge crest, skirting numerous areas of lingering snow and some scattered pines. The talus/scree is somewhat loose but the slope is not overly steep. It goes at Class 2 and you will be at Point 9997 in 15 minutes. Point 9997 had a lot of ridge snow on its southeast side. Find a way to skirt it or downclimb it to reach the dry terrain just below it. Follow the LONG southeast shoulder through a burn area and all the way down to a convergence of two drainages that form Cold Creek. This shoulder separates Cold Creek proper from a major (larger) feeder creek to its southwest. Consequently, I call it the “Cold Shoulder.”

The terrain on the Cold Shoulder is steep, loose talus high up. The shoulder has lots of rocky ridge outcrops and tedious side-hilling on loose scree to skirt the ridge outcrops. The ridge gets narrow in sections. The forested areas farther down have lots of blowdown. Mountain mahogany takes over in the steep descent to the convergence of the two creeks. As difficult as the Cold Shoulder can be in some areas, it is NOTHING compared to the murderous bushwhack that awaits you at the base of the shoulder.

The two creeks converge into one, thunderous, Cold Creek. The drainage is narrow and has steep, loose sides. The middle of the creek drainage is thick with tall bushes and veg. This is ROUGH. This is the quintessential BATTLE ROYALE for the ¾ mile that lies between the toe of the shoulder and Morse Creek Road/Trail. There are no animal trails to help. Not even wild animals are stupid enough to be here. You must get into the creek drainage and cross the thunderous creek on large logs a few times.

You must also side-hill on the left/east side of the creek drainage on steep, loose, angled scree to make headway in other areas. Just do what you must to continue to edge your way to the bottom of this nightmare. When you reach Morse Creek Trail (an old jeep road), cross Cold Creek on some wet logs and hike down the old road to your parking spot on Morse Creek Road.