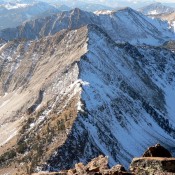 Ivory Peak is located east of Ebony Peak. I believe Dan Robbins was the first to publish the names of these two peaks. The names are appropriate as they reflect the colors of the two peaks. See Dan Robbins’ trip report for ascent details. Livingston Douglas provides details for the north ridge and southwest ridge routes below. USGS Washington Peak 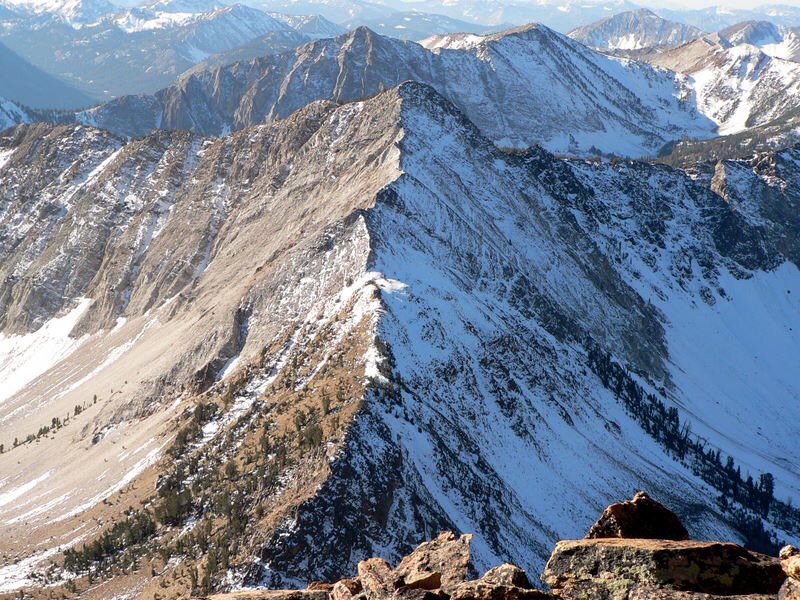 This is the second leg of a traverse from Fourth of July Peak to Ivory Peak to Ebony Peak.

From the 9,660-foot saddle at the base of the north ridge, you must immediately attack the crux of this climb. There is a large, imposing block of rock that is directly on the ridge crest. Your only option here is to climb a steep chute on the climber’s left/east of the ridge crest to get past this obstruction. Initially, you’ll think that you’ll never be able to get back onto the ridge crest, but just keep climbing the steep rock and soon you’ll be able to regain the north ridge. The rock quality here is very good. After you regain the ridge, it’s an enjoyable, Class 2 scramble up the ridge crest to the summit.

The Washington Peak quadrangle makes this ridge look knife-edged and awful, but it’s not. Yes, there is serious exposure on the west side of the ridge early on and on both sides of the ridge higher up. But you won’t have to worry about it, assuming you don’t suffer from acrophobia. If you’re planning to continue your ridge climb southwest then west to Ebony Peak, take the time to look for a potential descent route from the Ivory/Ebony saddle as you climb the north ridge of Ivory Peak.

From the summit of Ivory Peak, descend the relatively easy southwest ridge, staying to the left/southeast of a couple of rocky ridge outcrops. You will find goat trails on the southwest ridge to make your life easier. The bottom of the ridge turns right/west and you’ll soon arrive at the small Ivory/Ebony saddle (10,020 feet). From the saddle, you can continue west up the ridge to Ebony Peak, return back up over Ivory Peak and down to the 9,660-foot saddle at the base of the north ridge. Alternatively, you can attempt to descend northwest down steep, very loose terrain to the valley floor. A direct descent down the northwest face is quite dangerous and is NOT ADVISED.