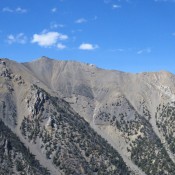 Climbing and access information for this peak is on Page 305 of the book. The route listed in the book is long and convoluted. Carl Hamke provided the east ridge route found below. Deb Rose supplied the photos of the route. I recommend the east ridge Route over the route in the book. Livingston Douglas climbed the southeast shoulder/southwest ridge route described below. Updated December 2019

Medusa sits north-northwest of Bell Mountain and just west of The Knoll on the main Lemhi Range Crest. It is the northernmost of four ranked peaks that flank upper Basinger Canyon. USGS Coal Kiln Canyon

Follow the route description for Peak 10490/The Knoll from Basinger Canyon [(C)(7) on Page 318] to the saddle on the peak’s west ridge. Scramble up the east ridge of Medusa to the summit. The route from Basinger Canyon runs up the prominent gully between Medusa and The Knoll. 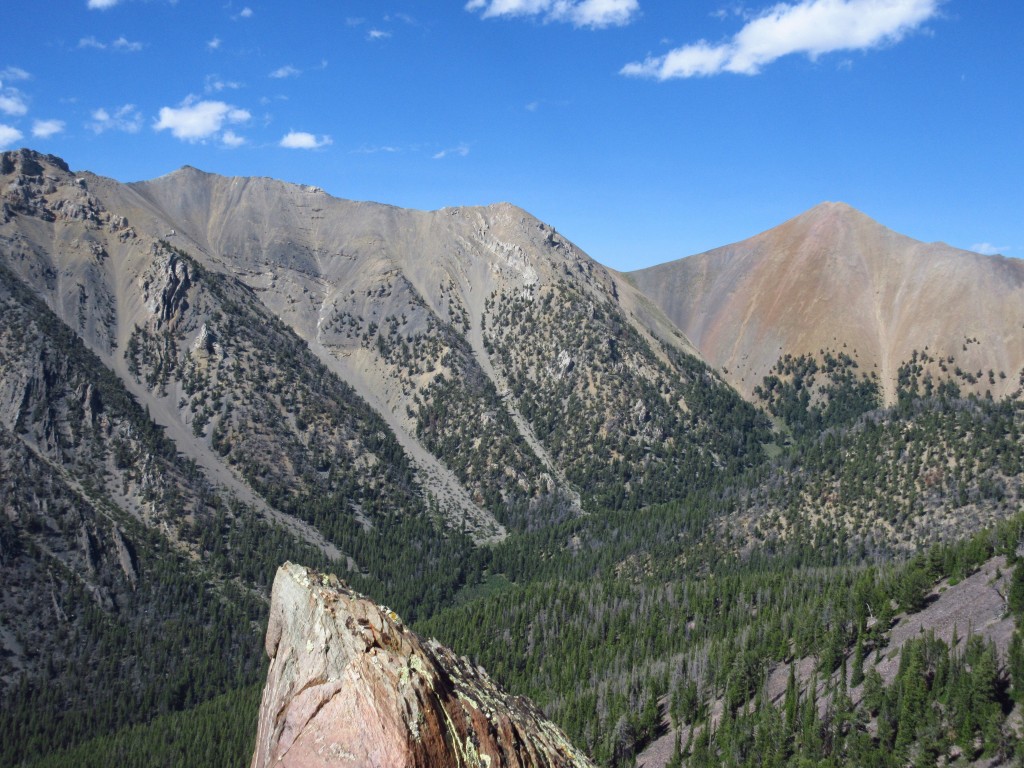 Medusa (left background) and The Knoll (right) as viewed from the west ridge of Bell Mountain. Carl Hamke Photo 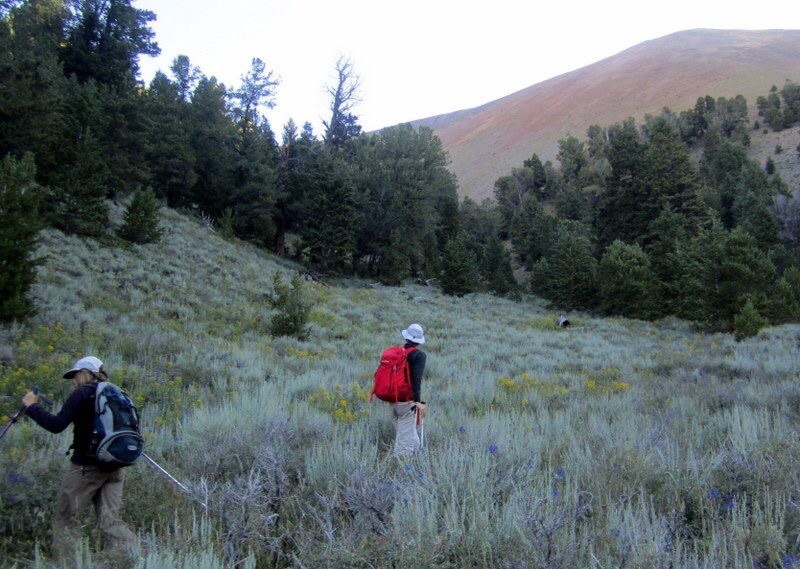 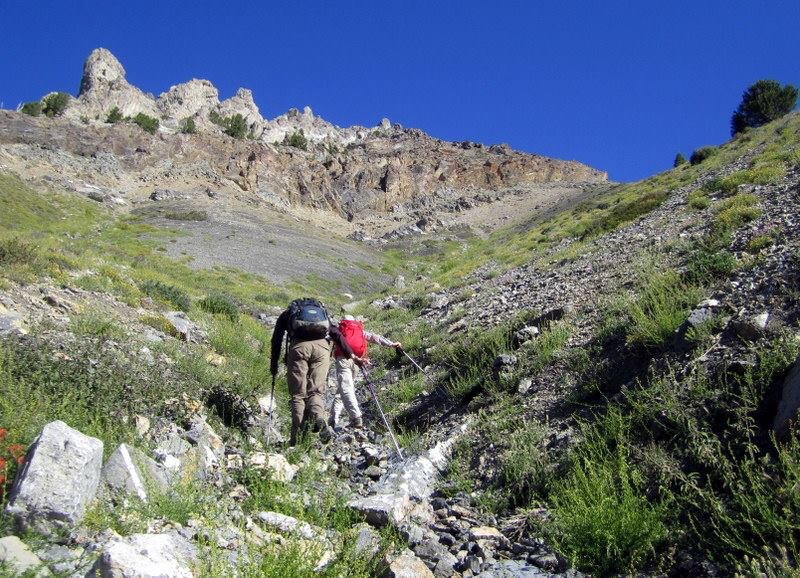 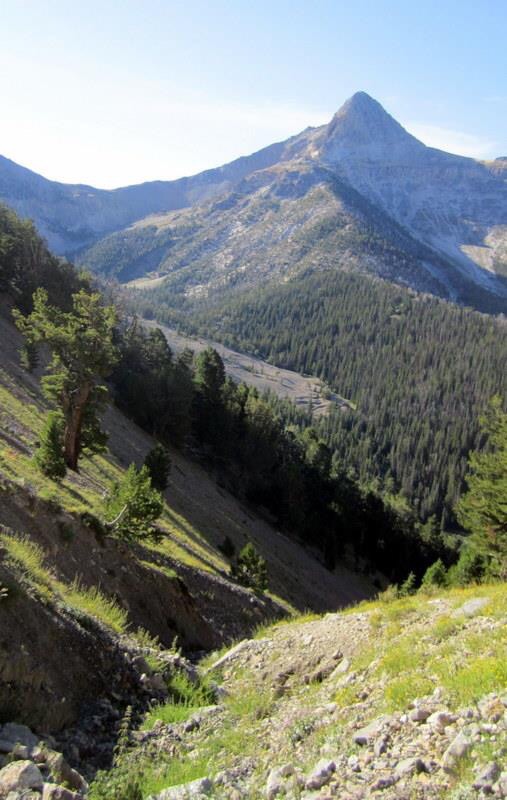 Looking down the line of ascent. Deb Rose Photo 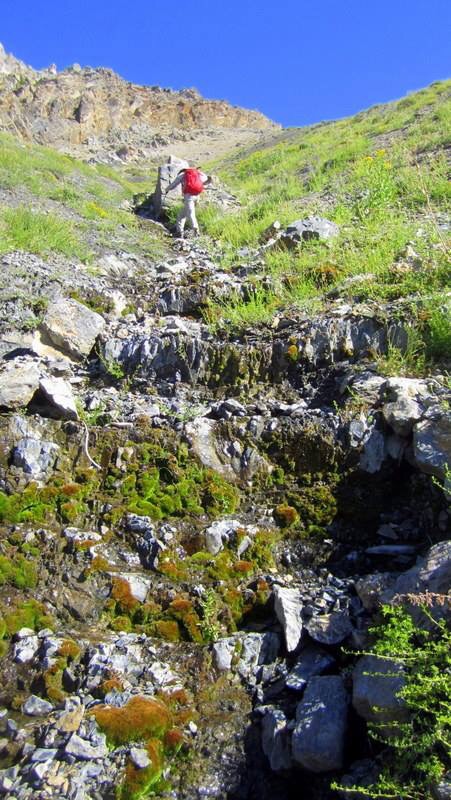 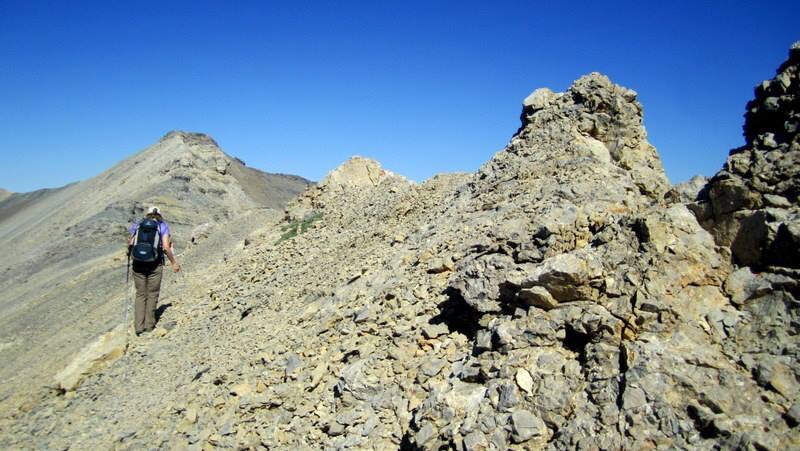 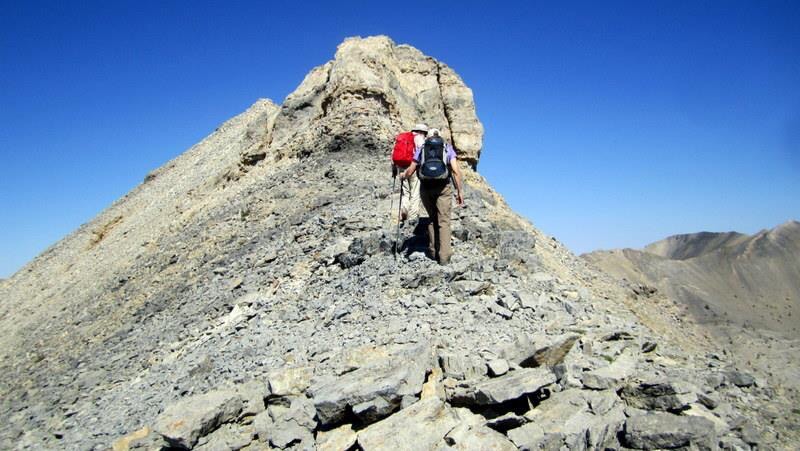 Basinger Canyon Road is located along the Little Lost River Highway exactly 5.8 miles north of Clyde. From the highway, turn right/east onto [unsigned] Basinger Canyon Road. At 0.8 miles, pass sheep pens on the right side of the road. At 1.0 miles, cross a bridge. At 1.1 miles, go left at an unsigned road fork. At 3.9 miles, reach the Challis National Forest boundary. Park here (6,675 feet). If road conditions permit, you can drive another mile up narrow, rocky Basinger Canyon Road/FSR-840 to shorten this climb.

From the Challis National Forest boundary, hike up Basinger Canyon Road to an unmarked junction where the main road goes left/northwest to head up to an old mine. Go straight here on a weaker road, which soon ends at a crossing of Bell Mountain Creek, a small stream. A use trail goes left up a steep hillside from the end of the road. Follow the use trail to 8,200 feet where a side canyon to Bell Mountain appears on the right/east. You can now see the rocky gullies and shoulders of Medusa through the trees to the left/west.

Leave the use trail and bushwhack left/west up to the edge of the lower forest to get a view of which line to take and which shoulder to climb. Stay left/southwest of a shoulder that has lots of difficult rock towers on it, and just left of a gully on its southwest side. Work your way up and leftward onto a forested shoulder that is easier than the “rock tower” shoulder. You won’t see the good shoulder at first, but it becomes better defined after you climb 200-300 vertical feet. Scramble up the crest of this shoulder (the southeast shoulder), or on its right/northeast side, in a steep mix of pines, blowdown, scree, gravel, and ridge rock ledges.

You will soon see the south ridge of Medusa to your left/west. It is rough, rocky, and pinnacled down low but becomes easy and smooth higher up. As you gain altitude, stay close to the ridge crest of the southeast shoulder for firmer footing. Navigate over or around a number of rocky outcrops/buttresses on the shoulder. Once above tree line and the rocky outcrops, it is a tough grind on steep, loose talus/scree. Look for embedded rock or strata to improve your footing.

When you reach the summit ridge, you are at a junction of the west ridge, the south ridge, and the southeast shoulder of Medusa. These three sub-ridges merge to form the southwest ridge. Scramble northeast up the easy ridge rock (choppy talus/scree) of the southwest ridge to reach the high point of this rocky ridge crest area. This is NOT the summit of Medusa. It is the [false] southwest summit. The true summit of Medusa is a gentle summit to the northeast a good ¼ mile away, with a saddle in between. Scramble northeast along the very choppy ridge (now Class 3) and drop 80 vertical feet to a saddle. Snow lingers in this saddle well into summer.

From the saddle, climb up the easy slope for only 150 vertical feet to reach the small summit of Medusa. The summit is a ridge corner of broken scree. The high point seems to be about 50 feet to the northwest. I built a summit cairn there. There were no signs of previous ascent. 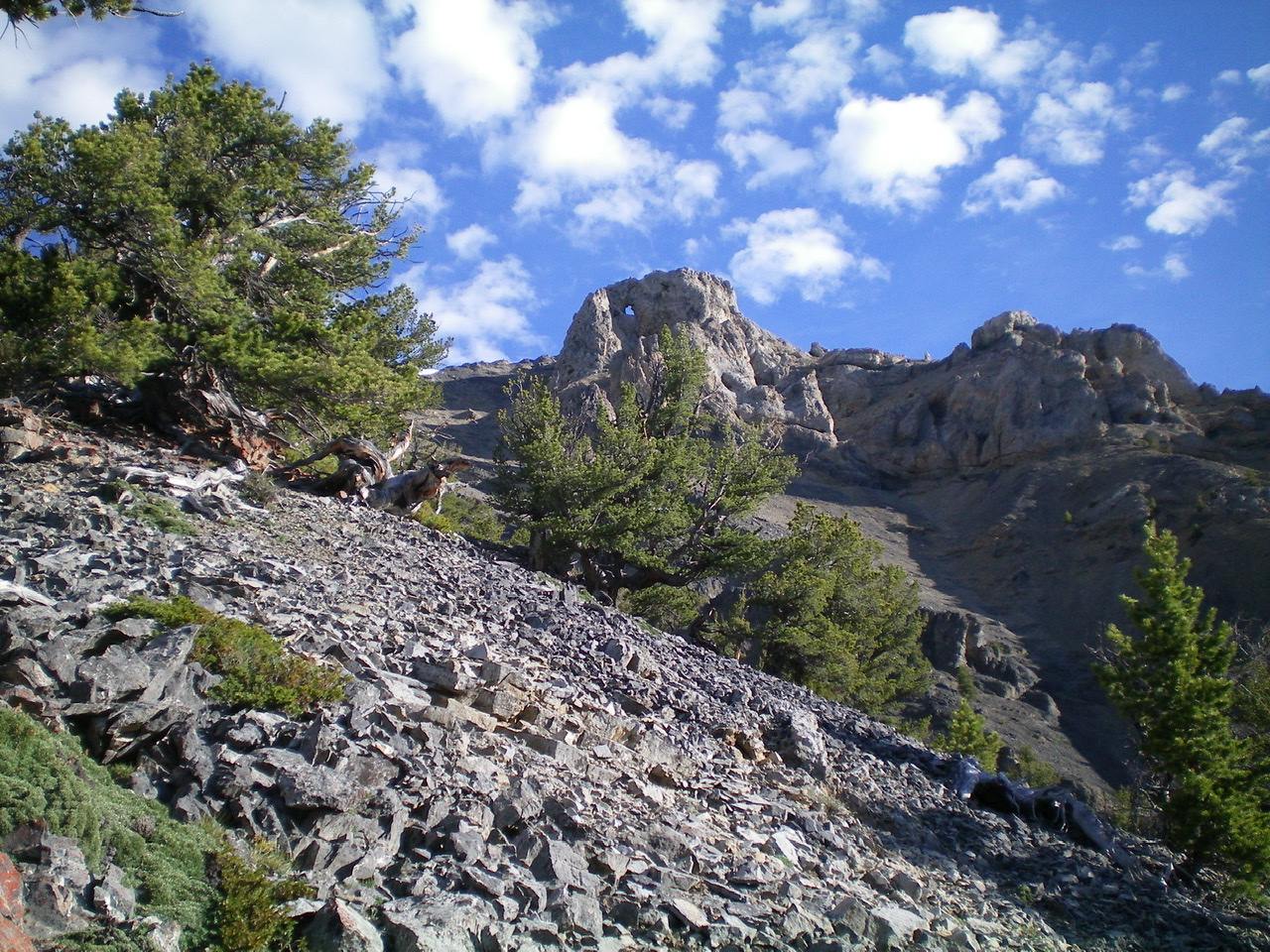 A view of the “window rock” on the [lower] southwest summit as viewed from the southeast shoulder. Livingston Douglas Photo 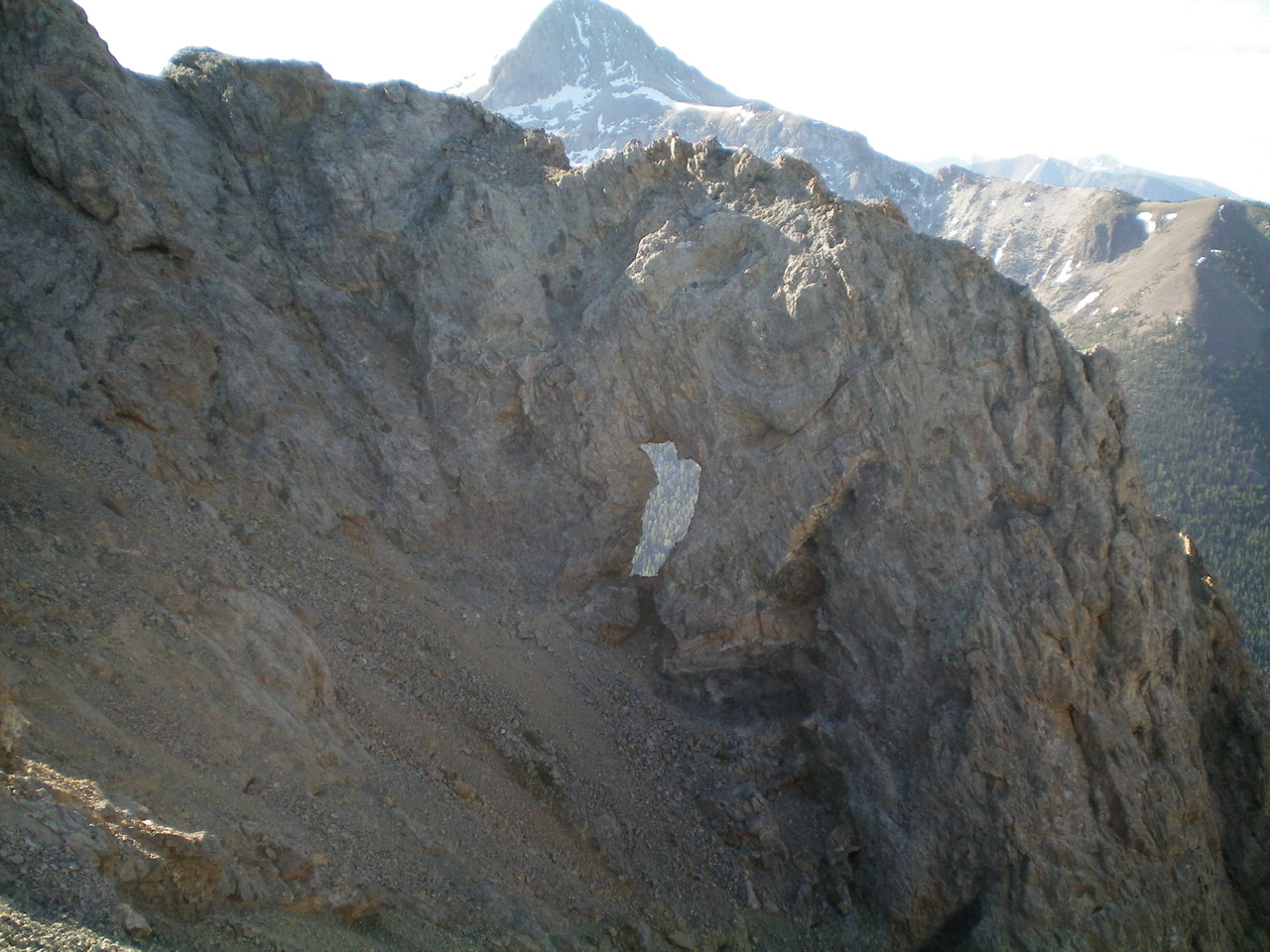 The “window rock” viewed from above, on the choppy ridge of the southwest summit. Livingston Douglas Photo 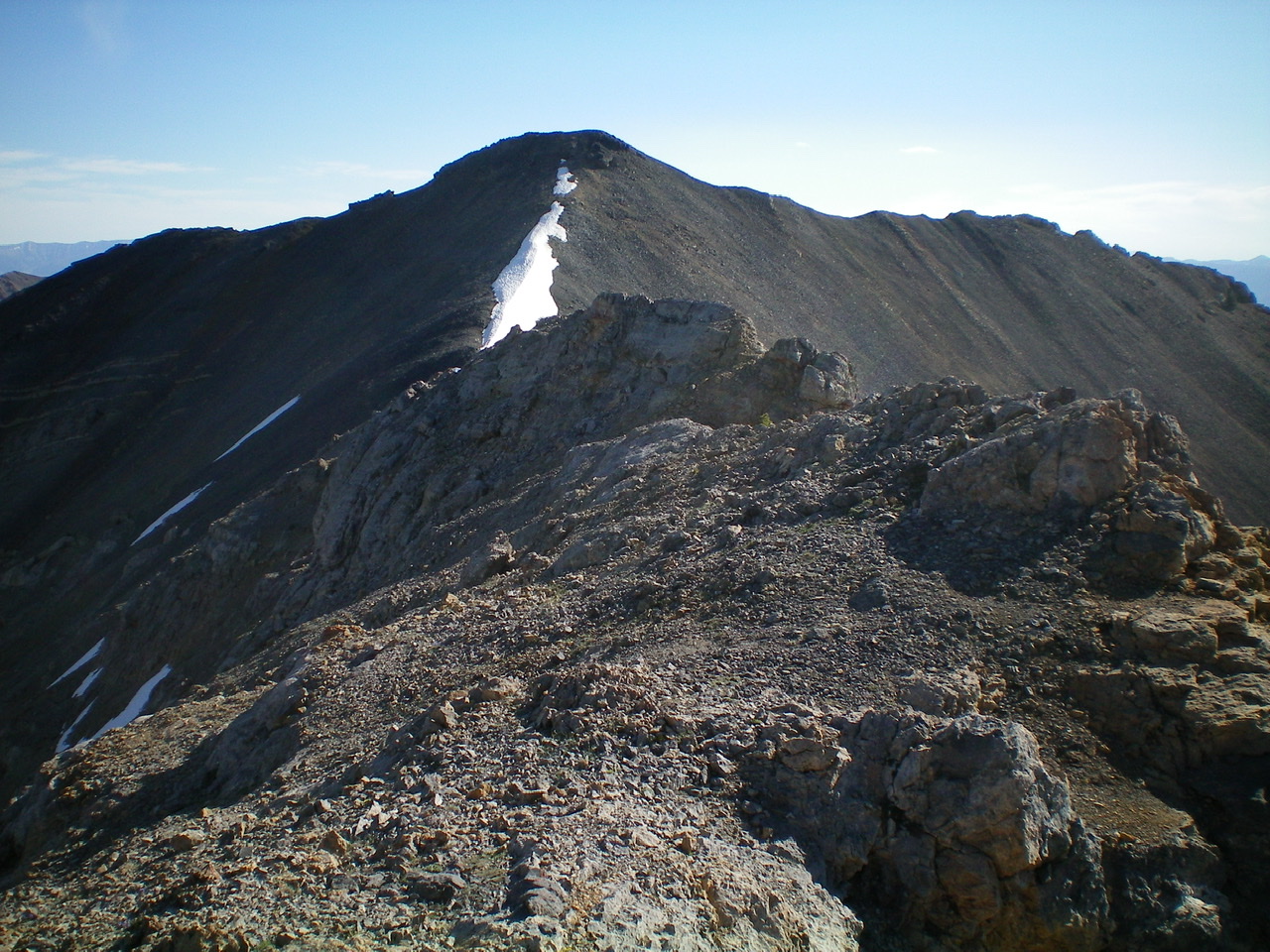 The rocky southwest summit (foreground) with the true summit of Medusa in the background. Livingston Douglas Photo 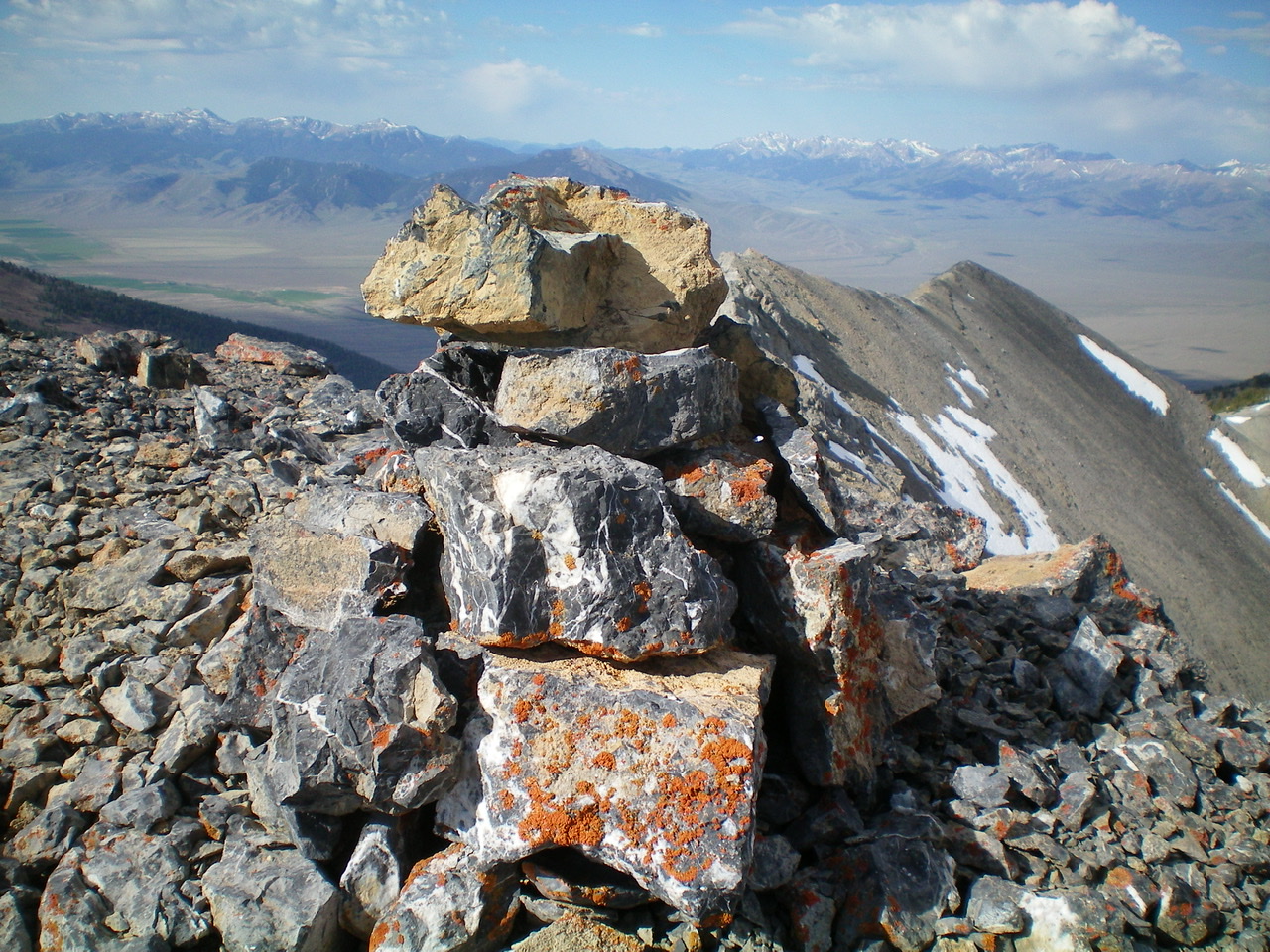 The newly-built summit cairn atop the true summit of Medusa. Livingston Douglas Photo 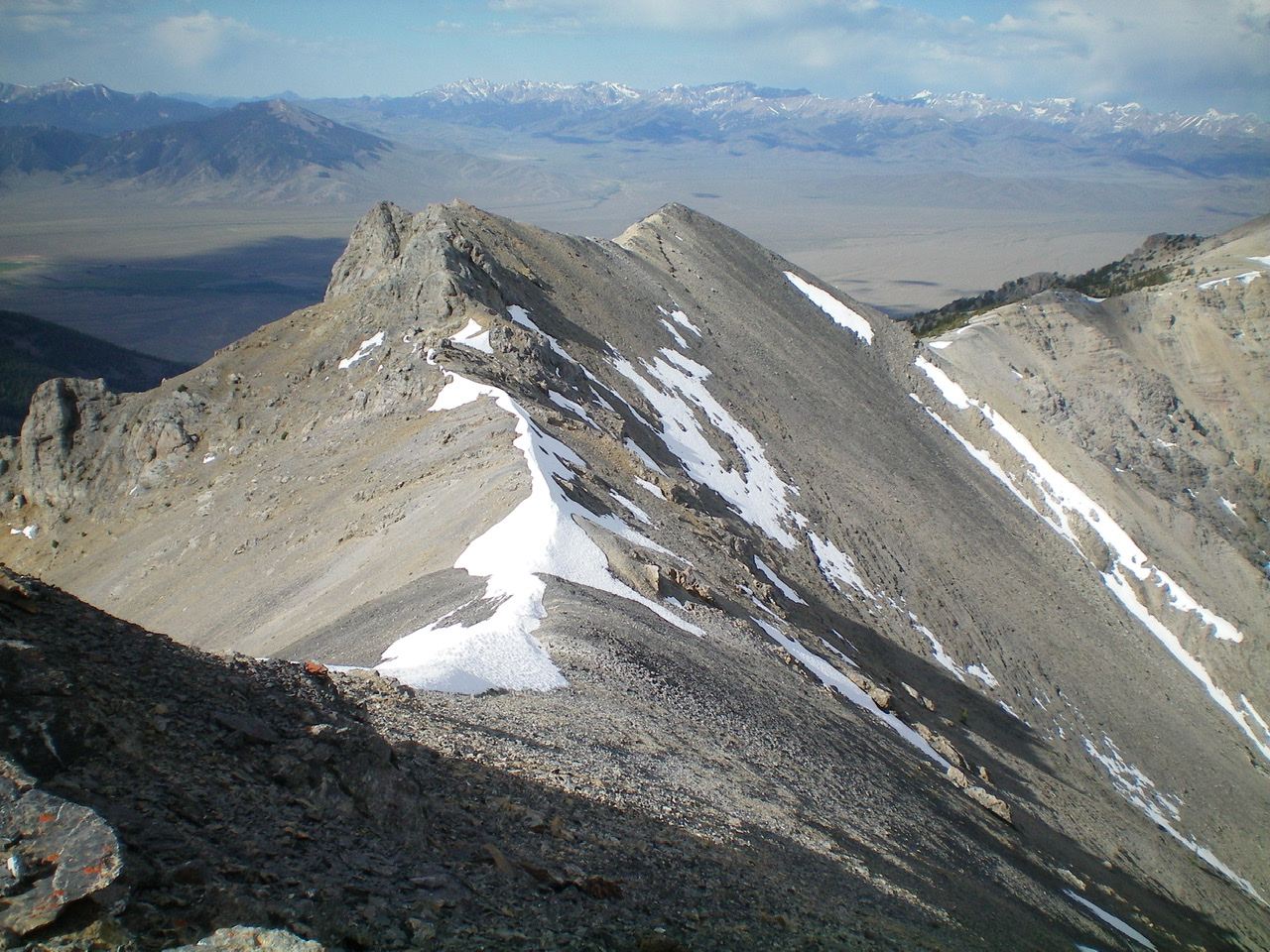 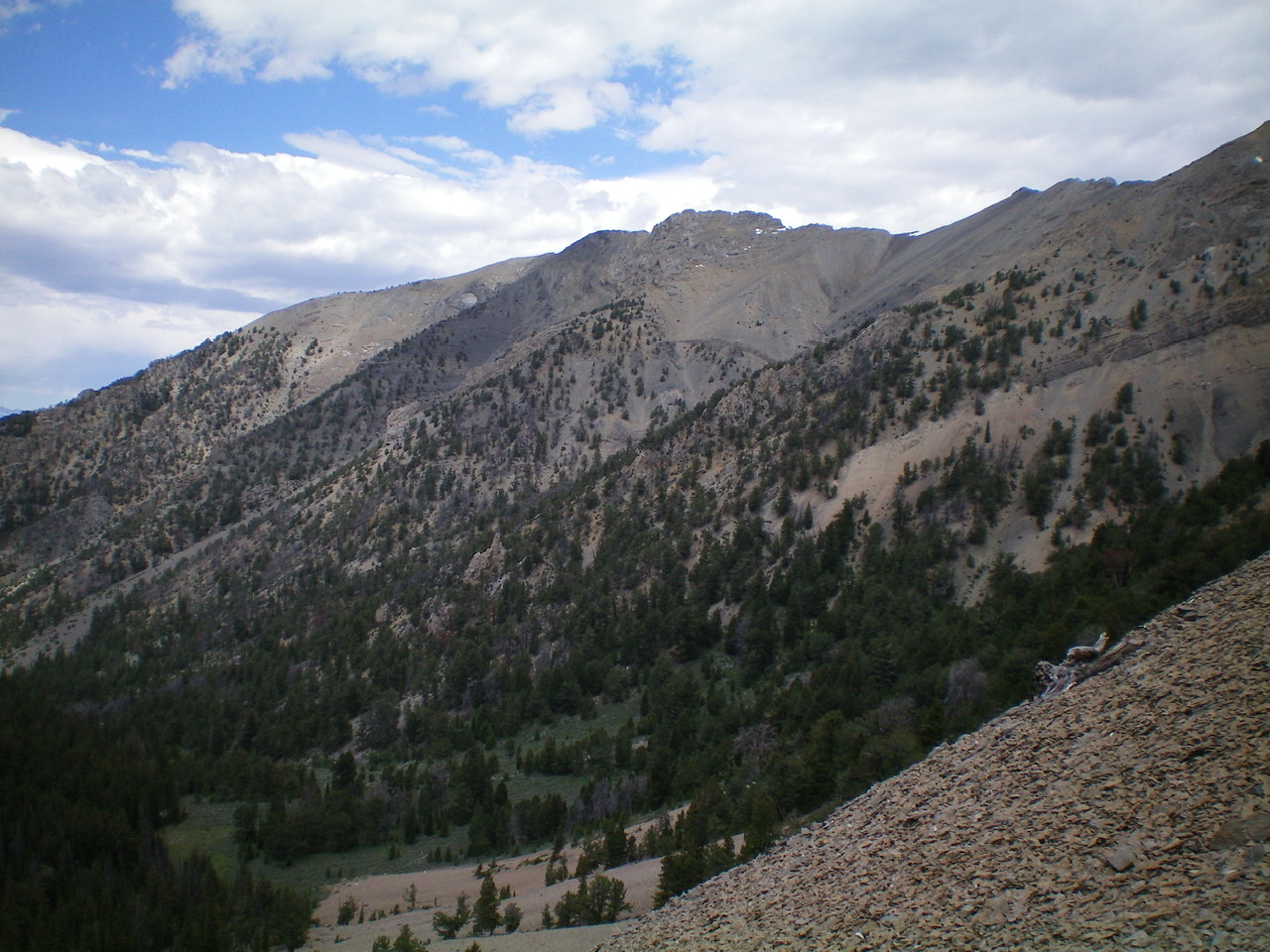 The multiple ridges emanating from the south side of Medusa. The farthest ridge (skyline) is the south ridge. The next one closest to the camera is the southeast shoulder. Livingston Douglas Photo 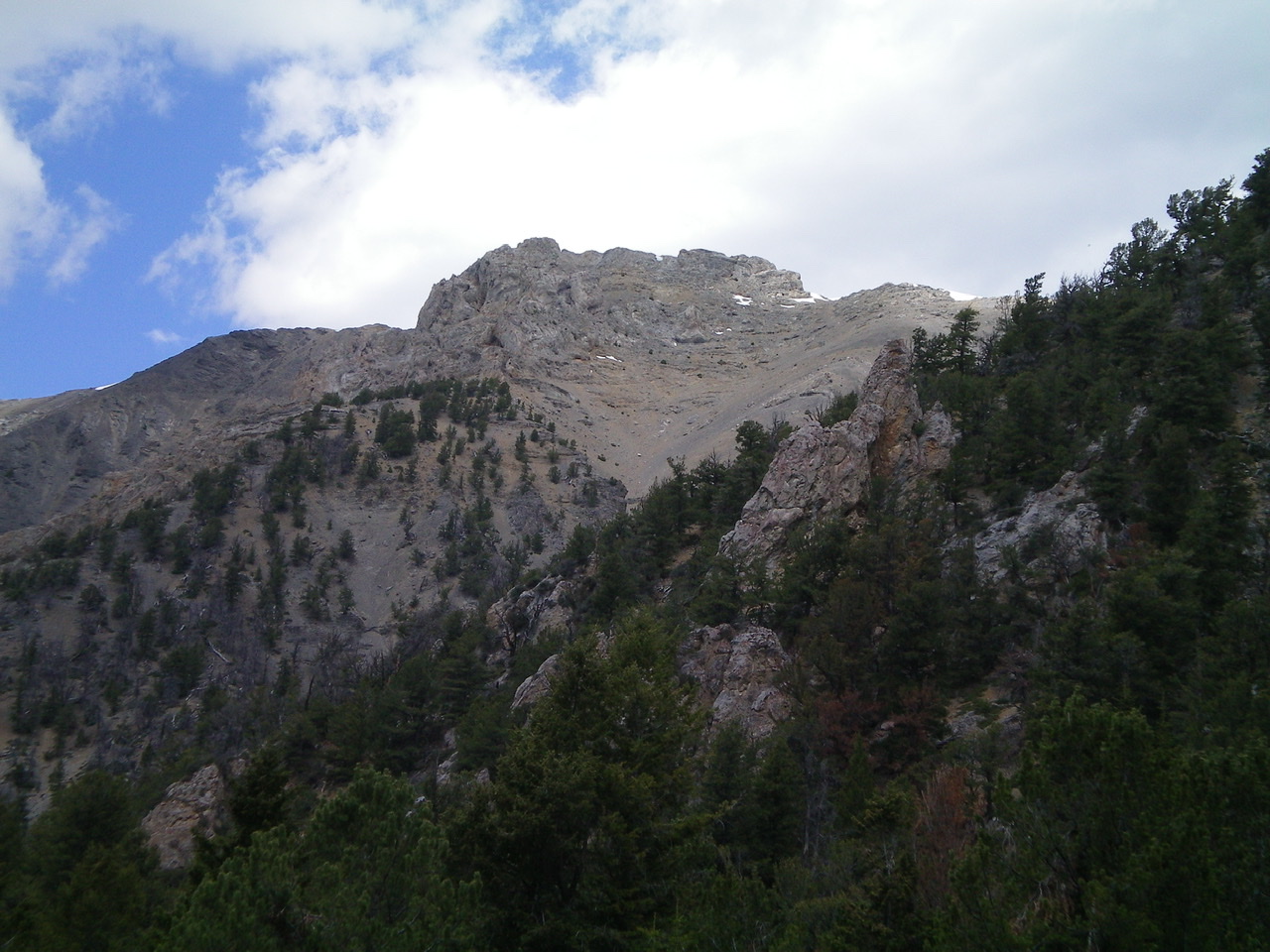 The rugged, elongated southwest summit ridge area (dead center) on the southwest ridge of Medusa. A Class 3 area, for sure. Livingston Douglas Photo